Tektites are quite popular with collectors - and moldavite is far and away the most beautiful of them. Moldavite's rich green color and uniquely textured surface makes it attractive to both collectors and jewelry makers.

Moldavites have been found in ancient jewelry (including a pectoral collar belonging to King Tutankhamun), but the first scientific description comes from prof. Meyer in 1787. The name moldavite was first introduced in 1836 by F. X. M. Zippe, the first curator of Natural History Museum in Prague. The name moldavite is derived from the German name of town Týn nad Vltavou: Moldauthein, where the first moldavites, were officially discovered. The Czech word for moldavite - vltavín - was probably first introduced much later in 1891. 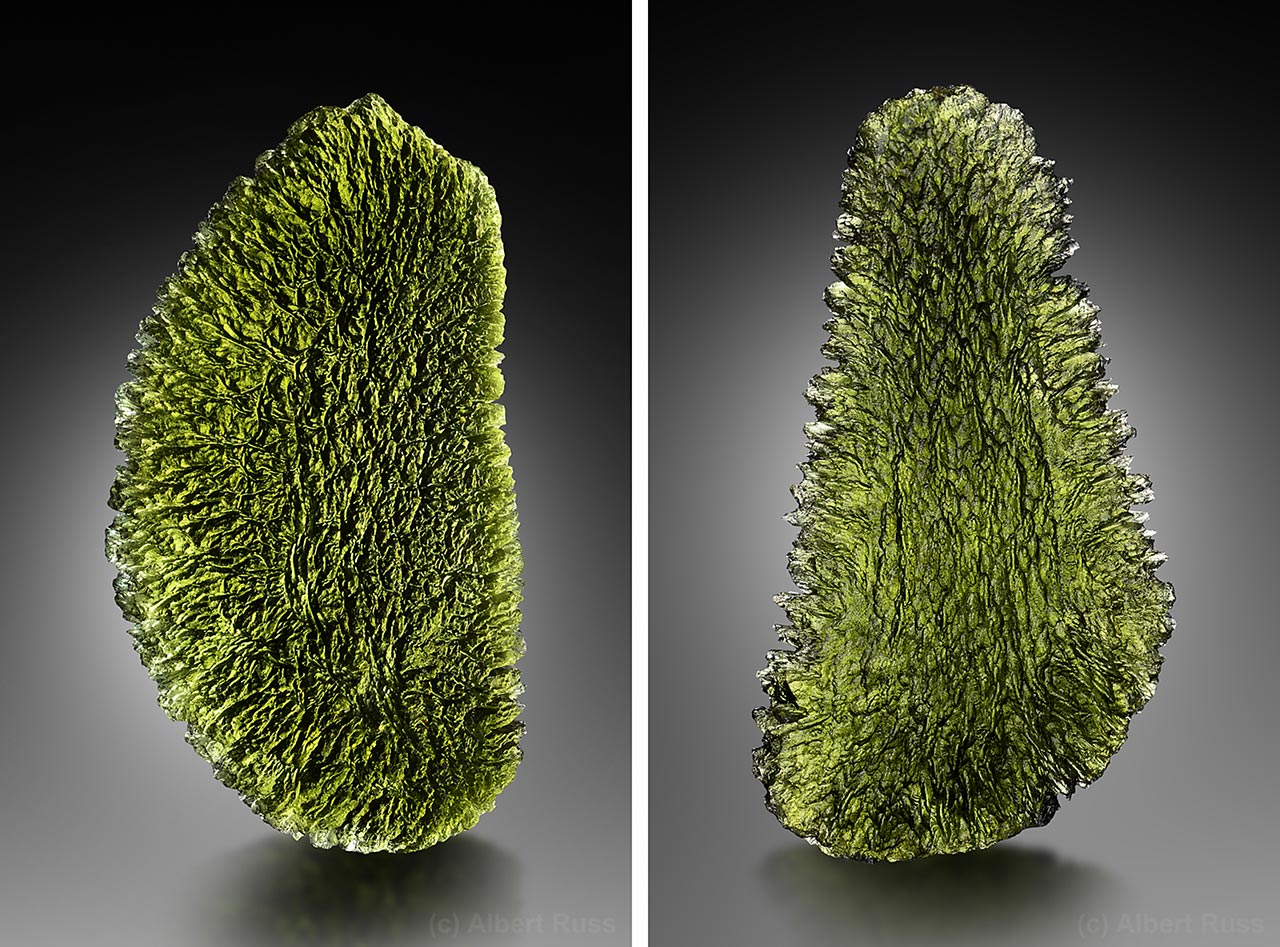 What is a Tektite?

Generally, the term tektite refers to glass created by extreme temperature and pressure during a meteoritic impact on rocks at the Earth's surface. The glass splashed out of the impact crater forms tektites; the glass formed inside the crater is called impact glass. Tektites are distinguished from volcanic glass (obsidian), impact glass, or fulgurites by their high level of homogenity and extremely low water content. Tektites also display very low pressure - often well below common atmospheric pressure - within their inclusions. 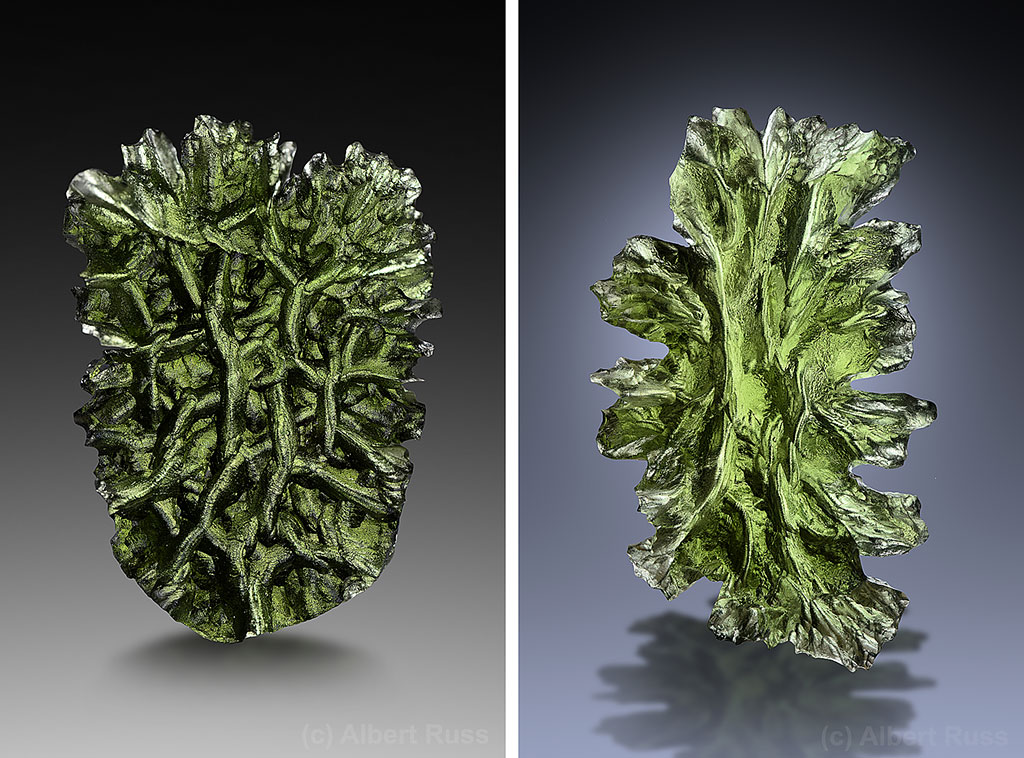 Some scientists theorize that tektites require three main conditions to form: 1) The trajectory of the meteorite must be inclined (not perpendicular) to the Earths surface. 2) The meteorite size must be over 1 km. 3) The impact area must be made of silica rich porous rocks such as sandstones or quartz rich sediments.

Moldavites are believed to originate from the impact crater Ries near Stuttgard in Bavaria, Germany. This crater's diameter is about 25 km: it was created by the meteorite between 1-1.5 km large coming from west direction. The moldavites were "splashed" out as far as 200-450 km from the crater. This particular impact event dates between 14.3-15.1 million years ago. 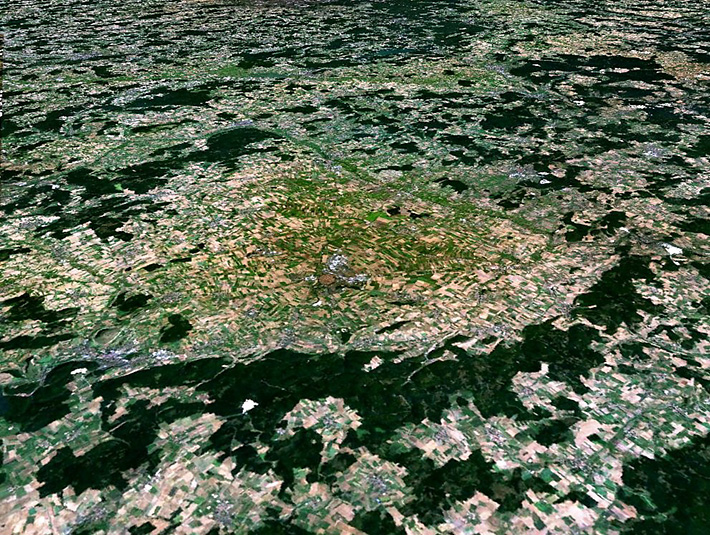 Satellite photo of the crater Ries from Landsat 7 in visible light. Note the forests on the rims of the crater. Photo: NASA

Moldavites are tektites, thus they are not true (IMA approved) minerals. About 65 % of moldavite glass is SiO2, the rest is mostly Al2O3 with a small amount of alcalic metals and trace elements. This composition varies slightly from one moldavite field area to another. The Mohs hardness of moldavite is between 6-7. Moldavite's color is usually green but rarely can be also brown. 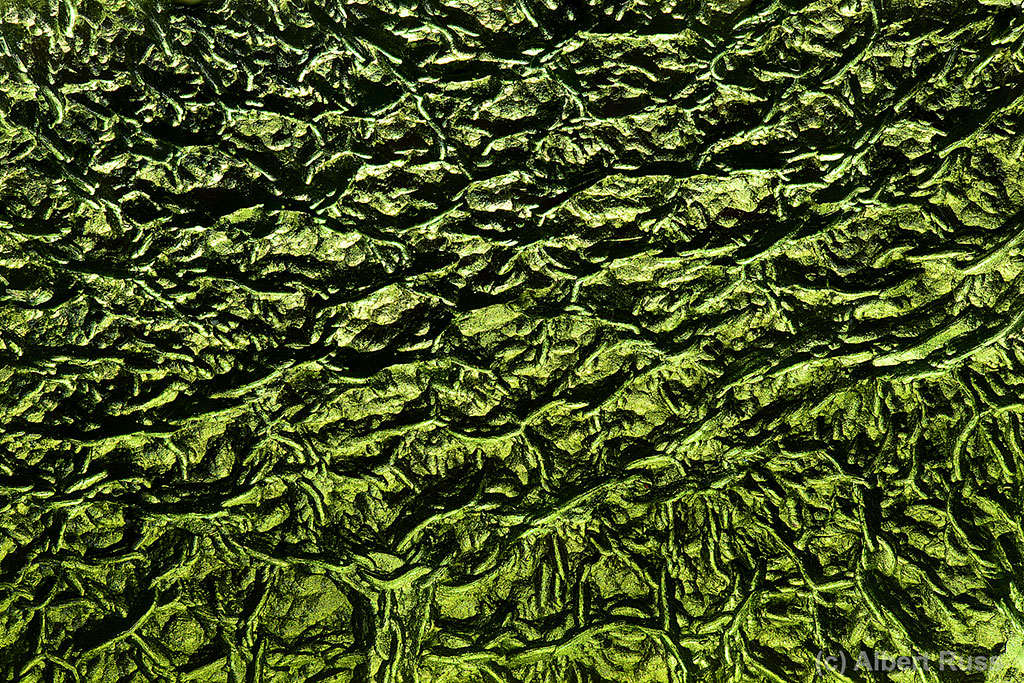 Moldavites from South Bohemia are heavily sculpted and highly valued by collectors. Moldavites in their original sediments are the best preserved: redeposited pieces are often tumbled, broken and dull. Average moldavites weigh only 6.7 g; the biggest Bohemian moldavites reach up to 12 cm and weigh about 150 g. 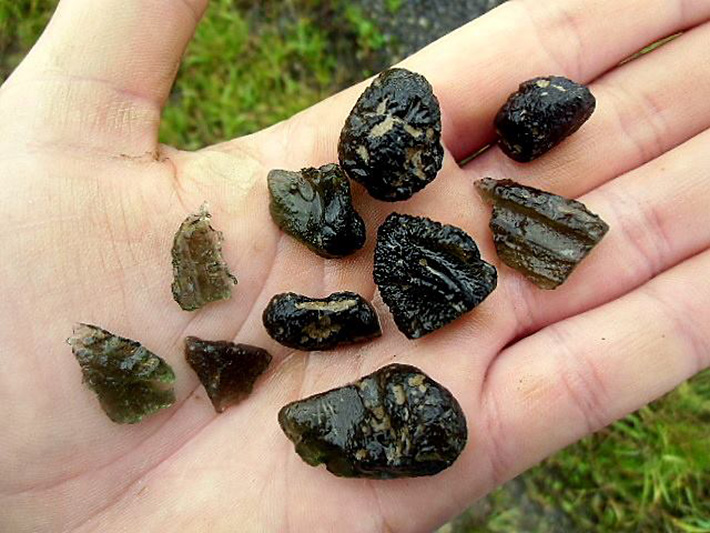 Moravian moldavites are less nice with usually little or no sculptation and look of typical tektites. They are significantly bigger then Bohemian ones - the biggest piece ever found near Slavice weights 265.5 g and average weight is 13.5 g. 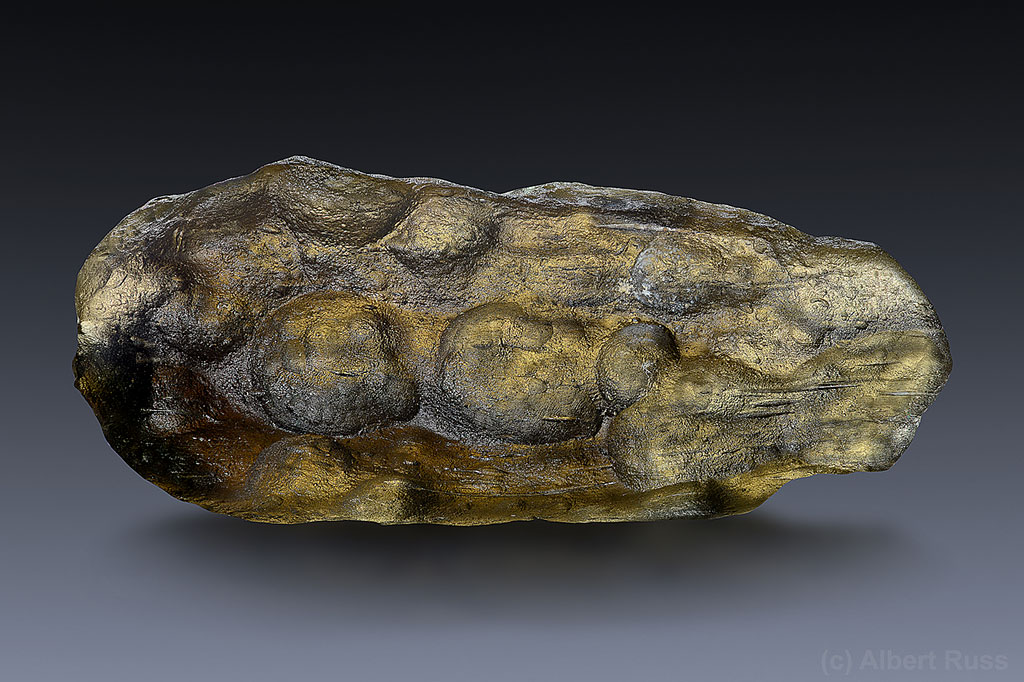 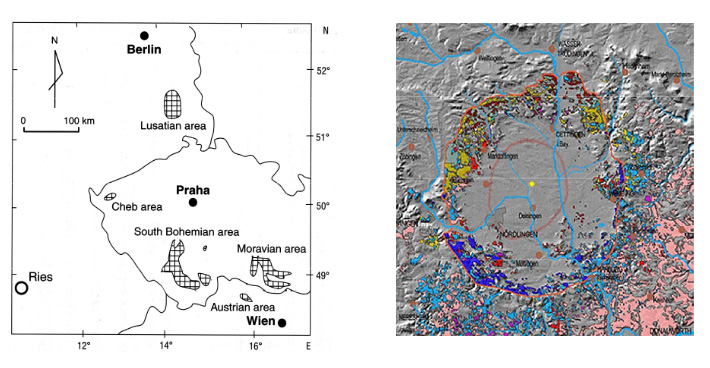 Moldavites are connected with certain miocene sediments, occuring in layers of sands and gravels. However some serious erosion has taken place in the last 15 millions years. Moldavites are not very resistant and they survive only short transport without serious damage. The current areas where moldavites are found are the eroded remains of the larger miocene sedimentary area in which they were originally deposited. 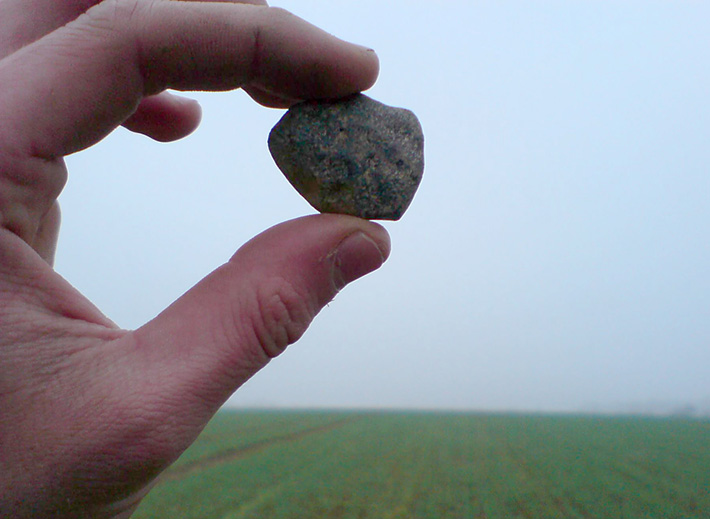 The moldavite bearing layers are exposed in sand and gravel pits, making collecting quite easy. It is also possible to try to find moldavites in fields. The gravels with moldavites lay beneath the soil and moldavites are ploughed out of this layer. It sounds like this could be the easy way to find good specimens, but it is in fact more frustrating: spotting the moldavite is difficult at best, and the ploughing process this often results in moldavites losing their typical luster and texture because of pervasive soil fluids. 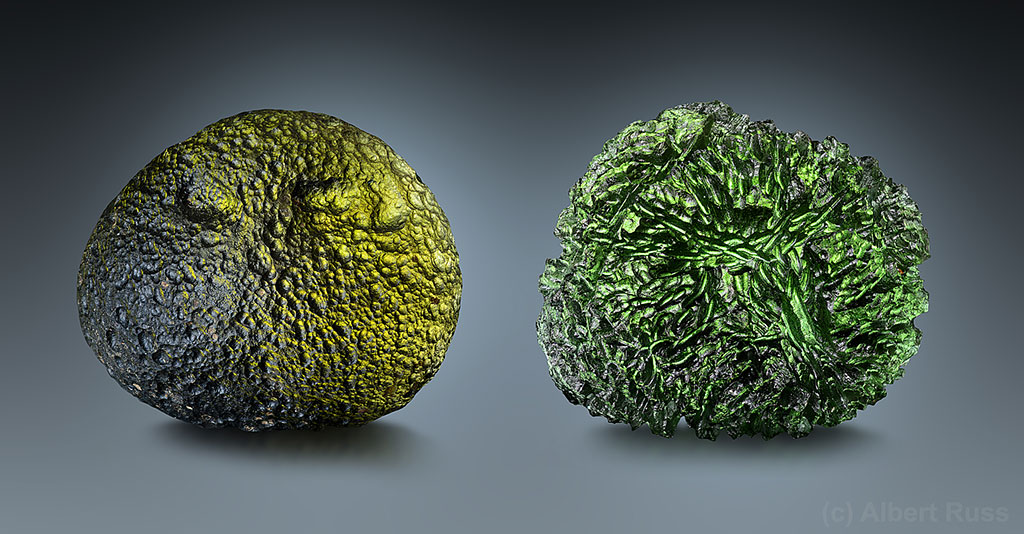 Moldavites are highly valued by collectors worldwide, and the New Age community's assignation of special powers to moldavite has only increased their value. The status of the Czech economy (the average Czech income looks like a joke compared to those in western countries like Germany, France or the United States) provides plenty of motivation for illegal prospecting and selling of moldavites. These conditions have given rise to groups dedicated to illegally mining moldavites which are then sold at shows or online. Not caring about anything but the continuation of their business these groups leave landscapes marred by holes and fallen trees in their wake. Naturally, the landowner or state do not get a single cent from the proceeds of the sale of these illegally mined moldavites. 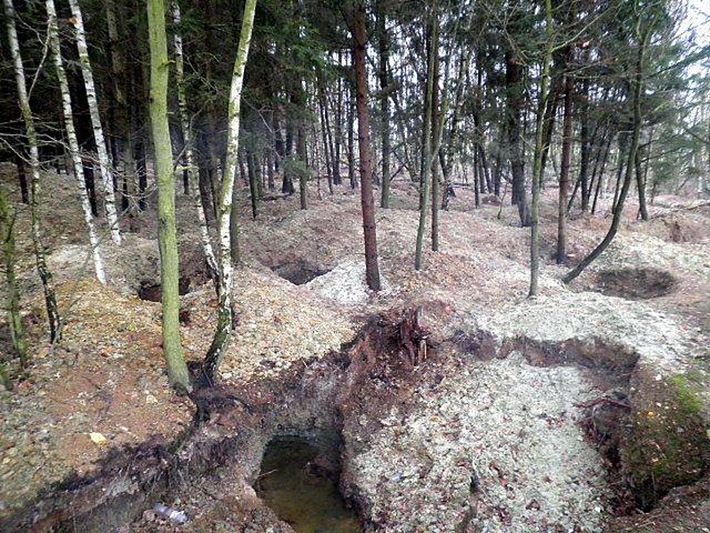 The influx of illegal moldavite diggers has prompted some villages and landowners to hire formal moldavite mining companies. Several of the best moldavite sites are now mined by private companies under various conditions - some claim to be mining gravels and moldavites are a byproduct, some are mining moldavites to protect them. Despite wild claims about saving moldavites and landscape by legal mining by the government, Mining Bureau and landowners, this legal mining is considered highly unethical and controversial by many specialists. There is no strict control of moldavite mining and the chance of leakage of officially mined moldavites on black market is really high. Some rumors suggest that only as low as 10% of mined moldavites are reported. 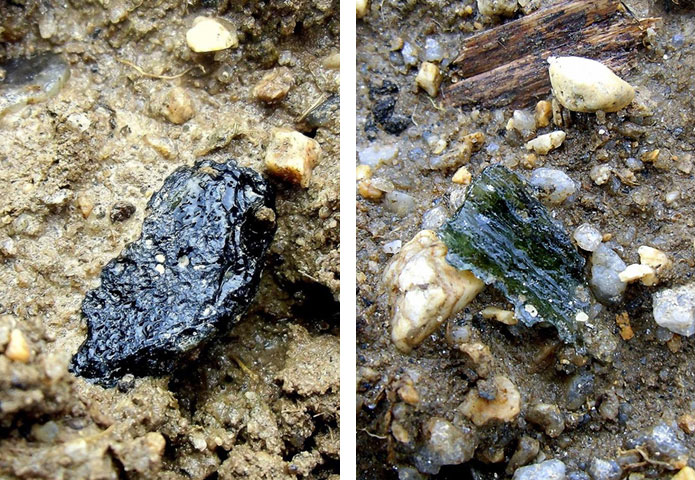 Moldavites sitting in the soil on the fields near Něchov, South Bohemia. Both photos: Petr Třebín

How to Recognize Fake Moldavites?

The inflated value of moldavites is unfortunately also a huge motivation for the unscrupulous to pawn off fraudulent moldavites on the unwary. As a result, the market is saturated with fakes, from those cast of green glass, to the very sophisticated fakes fashioned from moldavite chips. Once you had the real moldavites in your hands, its easy to recognize the former: glass fakes lack the proper shape, appearance and color. However, the latter technique, which can be used to cast large, realistic pieces can produce fakes that are unrecognizable even to professionals. They have exactly the right composition: if the shape is done properly, the only way to prove their origin is to subject them to complex and expensive scientific testing. 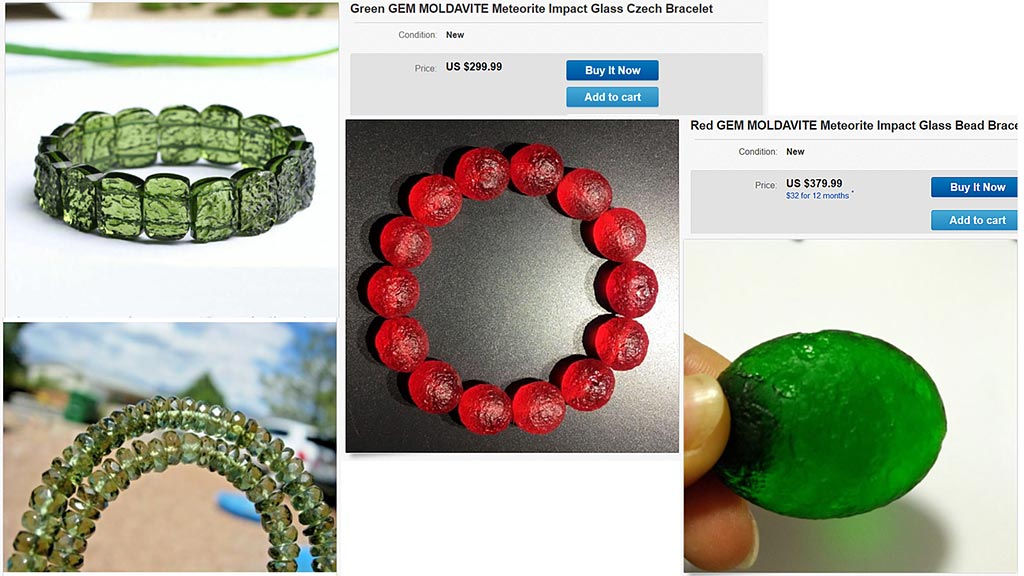 Selection of very obvious moldavite fakes offered on e-Bay in January 2020 - keep in mind that most of the moldavite fakes are not that easy to recognize! Photo: Various scammers

Buying moldavites - especially from e-bay/Facebook dealers - is extremely risky and you have pretty good chance to receive moldavite fakes. It does not take too much effort to find some pretty obvious scams. Any colored version - like golden moldavite or red - is obviously fake. Also the faceted stones are extremely suspicious, not to talk bracelets from China.

Careful examination with decent loupe can reveal patterns and scratches after creating fake sculptation with drill. Some more experienced scammers are quite skilled and use hydrofluoric acid to get natural etched look of the surface. However, one thing is very hard to fake - lechatelierite inclusions. These make tiny needles, sometimes peaking out of the moldavite surface. Some fakes also strongly fluorescence in UV, while real moldavites do not. Unfortunately, all these things are very hard to verify when buying on the internet. Stay very cautious, even experienced dealers may be fooled by someone else. And also some Czech sellers offer fake moldavites and use their location as the advantage to fool the buyers!

Finding decent moldavites on your own is definitely not easy, and requires the proper permission and awareness of the legalities of your collecting. Collecting inside the active sand and gravel pits is fine - with the permit of the owner, of course. Collecting in the fields is usually tolerated: landowners often do not care as long as you do no damage. Digging in the forests is strictly forbidden. Wherever you dig, please respect the law and the wishes of landowners! 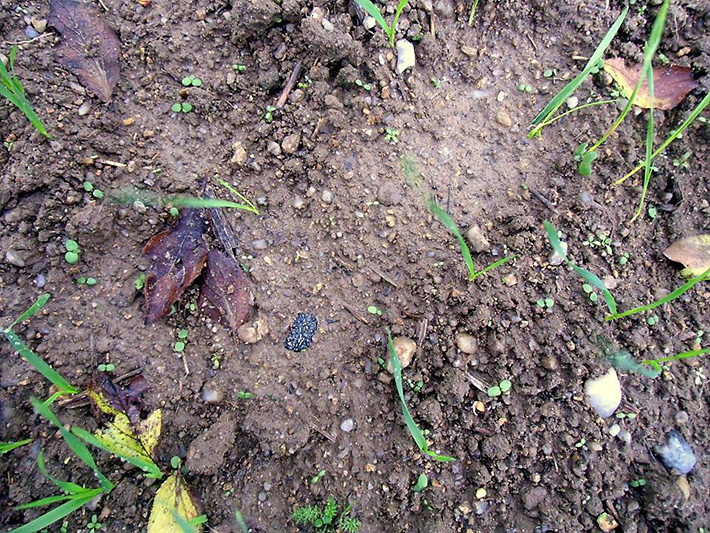 Spotting moldavite is not easy - here is the proof with moldavite placed directly in the footprint of some unlucky collector. Photo: Petr Třebín