Rožná - the last uranium mine in the EU

Rožná is the European Unions last operating uranium mine. Although the mine is located in Dolní Rožínka, its underground span reaches under several other localities. Being one of the last european ore mines, the Rožná is a great place to see a classic example of underground mining. 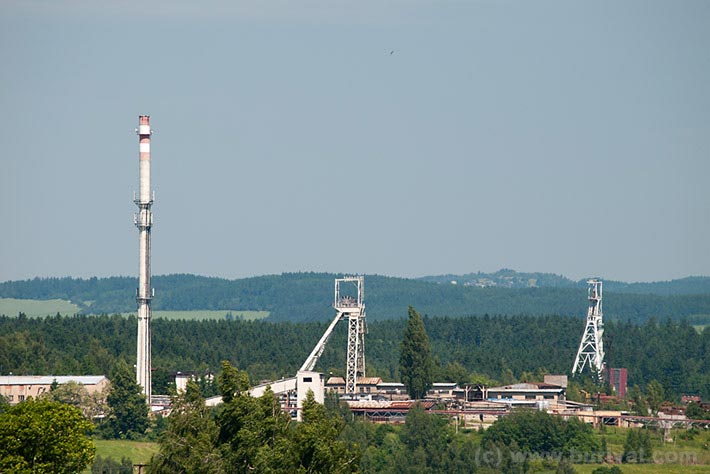 View over the Rožná mine. The shaft on the left is R1 (main mining shaft) and the right one is R3 Jasan (now emergency exit). Photo: Zbyněk Buřival

The Rožná mine is operating under various names since 1957. During this period the mine produced 19,500 t of uranium (20 % of total Czech production). During communism the yearly production from all Rožná mines was about 400-450 t and in 90. the severely reduced mine still produced 300-350 t of uranium per year. Total mining production is over 16.3 millions of tonnes of ore with average 0.119 % of uranium. Underground includes 6.7 km of main shafts, over 500 km of adits and more then 100 km of vertical mining chimneys. The mine has 24. levels and the total depth is 1200 m from surface. During its history the Rožná mine employed over 30,000 people and the staff went from 4,000 employees in communism era to around 1,000 employees now. 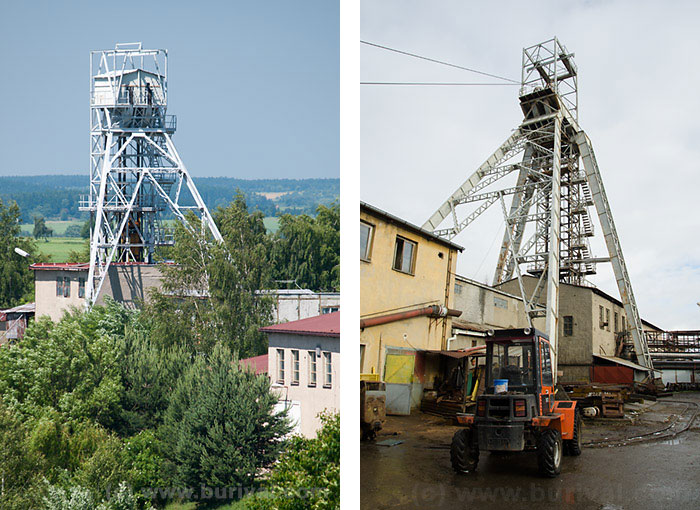 The first signs of uranium ores were discovered as radiometric anomalies in 1954. After a short but intensive period of exploration, the construction of the first shaft R1 was started in 1957. In 1958, Rožná became an independent state company, and in 1959 the ore field in the vicinity of the Olší village became a separate mine. In 1963, the Rožná mine itself was split into 2 units - Rožná I and Rožná II. By then there was total of 71 km of adits and 11 km of various shafts, and the mine produced over 580,000 tonnes of uranium ore - the most productive the mine would ever be. 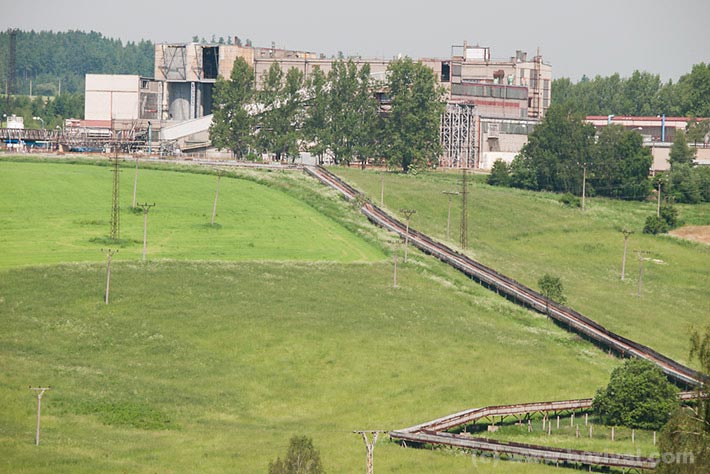 Processing plant was built in late 50s near the mine. Photo: Zbyněk Buřival

After this rocket start, the Rožná mines continued producing steadily. Mine development continued, with the construction of many new shafts and adits, as well as continuous modernization. In 1970, after the R1 shaft reached the 12th mining level, it was decided that a new shaft designated R7S - which could be constructed faster and more cheaply - be built from the 12th level to the 24th. Utilizing the R3 Jasan (formerly the Rožná II mine) as the main mining shaft must have seemed like a good idea at the time, but it later became evident that this was had been a costly mistake, both financially and in terms time spent transporting the ore. Despite this, the steady evolution and mining continued until 1987 when uranium mining was curtailed. 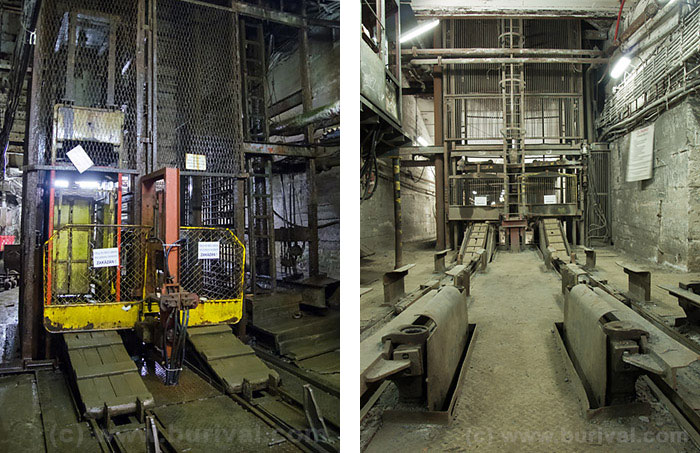 Left: The oldest R1 shaft with wooden frame is the main shaft. Right: The much newer R7S serves as main transport channel from 12th level down to 24th level. Both photos: Zbyněk Buřival

The early 90s. were a disaster for the mining industry in the Czech Republic. After fall of communism, many state owned mines were privatized and a fair number of those were subsequently closed. Many were sold for next to nothing or closed for various political reasons. For those who had lived during the communist era, uranium mines in particular were an unpleasant reminder of those days, rendering them extremely unpopular. Additionally, the closed mines became an economic or environmental problem. This era left the entire state economy scarred, and some 20 or so years later we are still paying for it. 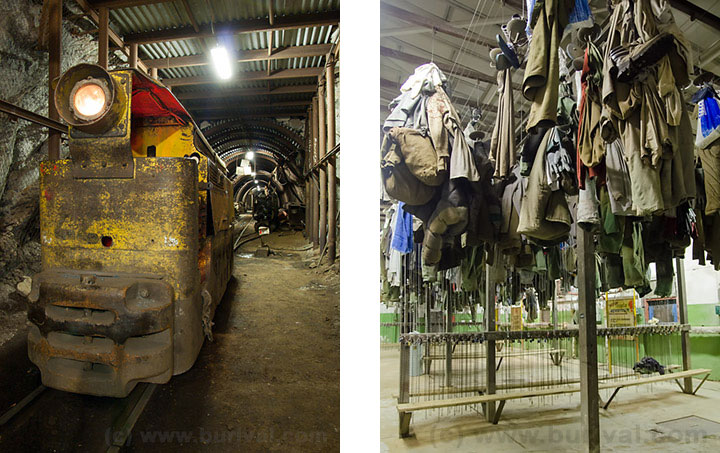 Left: The mine locomotive on the 12th level inside the mine. Right: The old-fashioned chain dressroom used in many mines decades ago. Both photos: Zbyněk Buřival

Casualities of this period were many: the nearby independent mine in Olší was closed down completely. The Rožná mine was luckier: production remained more than adequate, and despite tremendous pressure to shut it down, the mine was only reduced to smaller size and changed over to selective mining. In 1995 came stupidest idea yet: the decision to shut down the Rožná II mine. Rožná I and II are still connected underground and via most modern part of the mine: the off-centered shaft R3, but the R3 was also shut down and now serves only as an emergency exit. The operating portion of the mine now uses the very old R1 shaft and its more outdated system of transportation. 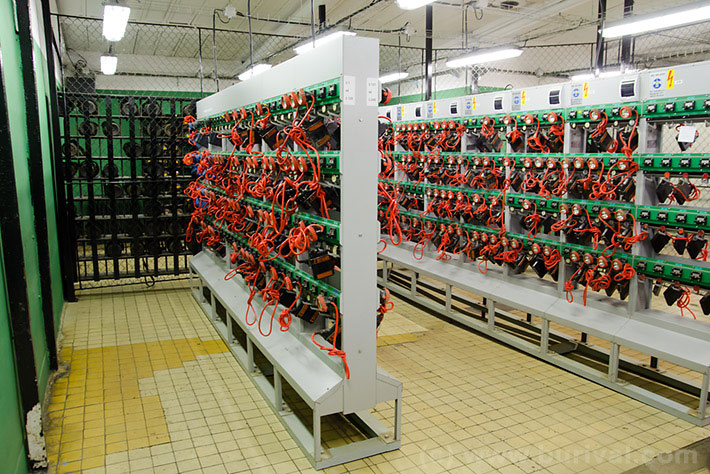 Carbide lamps were used when the mine started. Now the miners use modern electric lamps. Photo: Zbyněk Buřival

And here is where the 1970 decision to build the blind R7S shaft backfired completely: instead of the more efficient pre-1991 arrangement, carts now had to be hauled from the mining site on levels 22.-24. to the R7S shaft, and taken up to the 12th level. From there, they must be transported 2 km to shaft R1, and from there to the surface. This effectively cripples both the speed at which ore can be mined and production once it is on the surface. Unfortunately, there is no going back: even using the R3 is impossible because of the different technology employed there. 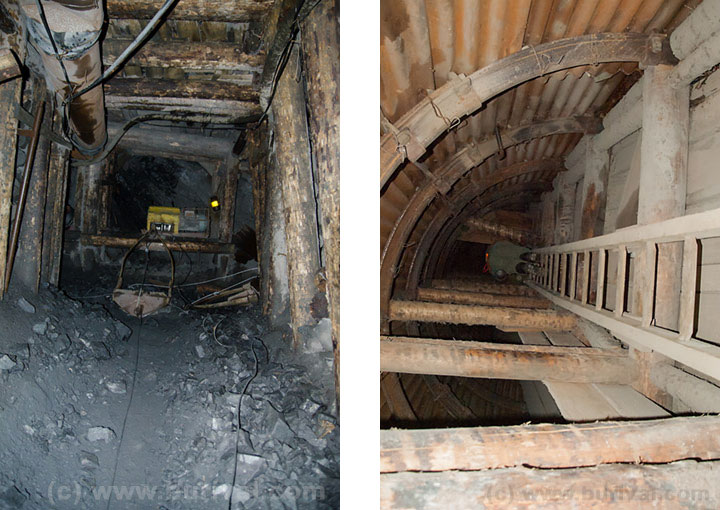 Left: The mining blocks are blasted, scraped and then collapsed. Right: Small chimneys connect main levels with mining blocks and serve as a transport also for the uranium ore down into the carts. Both photos: Zbyněk Buřival

The 1990s also ushered in an era when investment into further exploration, modernization and growth of Rožná mine was almost nonexistent, and the situation has not improved. More than once, the mine has been on the verge of shutting down. Additionally, as it has remained under the ownership of the state, all profits from Rožná mine are funneled into either the reclamation of other mining sites or directly into the state budget, effectively preventing any serious investment into mine development or exploration. 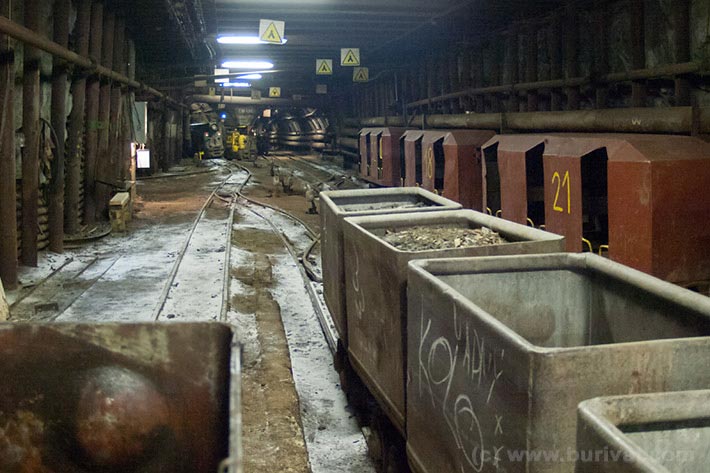 The future of the mine was especially uncertain between 1997-2007; currently the mine will remain open until ore extraction becomes unprofitable. Sadly, without any reasonable exploration and with lack of investment it is just a matter of few years. The only bright spots - if they can be called that - in the mine&s future would be the construction of underground gas storage chambers and testing for nuclear waste repository. 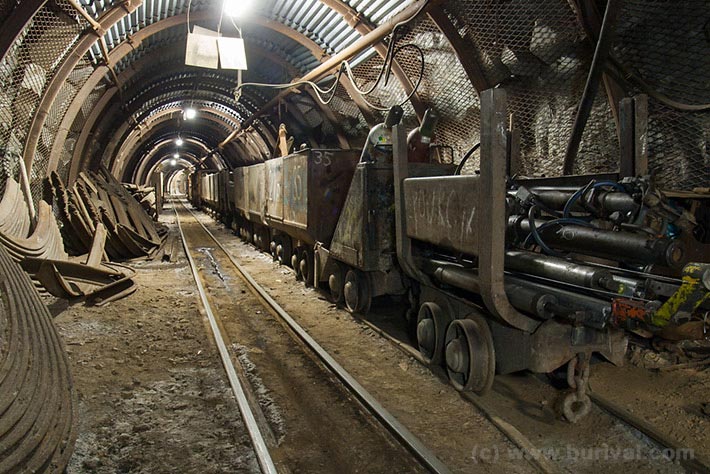 The mine has its own processing plant producing ammonium diuranate. The plant was built in late 50s and its planned lifespan was 8-10 years. After several patches and bypasses it still works. The processing facility is also responsible for managing settling pond and water treatment. Despite very old uranium processing technology, the water cleaning facilities are modern and highly effective. The processing plant is the last one in the whole country and processes also all the wastewaters from the cleaning facilities at closed uranium mines. 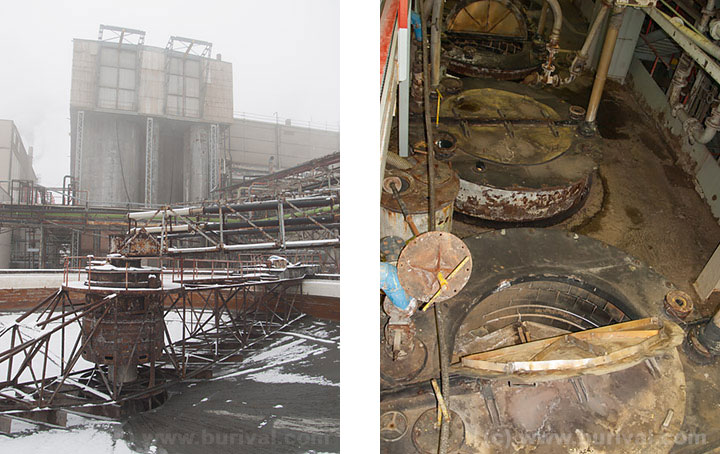 Geology of the deposit

The whole area belongs to Strážek unit. The main rocks are cordierite-biotite or amphibole-biotite gneisses, often heavily migmatized. These rocks form a huge Rožínka-Olší N-S anticline and the adjacent Rozsochy (the location of the Rožná mine) and Olší (the former location of the be Olší mine) synclines . The gneisses contain abundant smaller bodies, veins and lenses of amphibolites, marbles, erlans, quartzites, serpentinites and pyroxenites. Also some small syenite and granite intrusions are present. 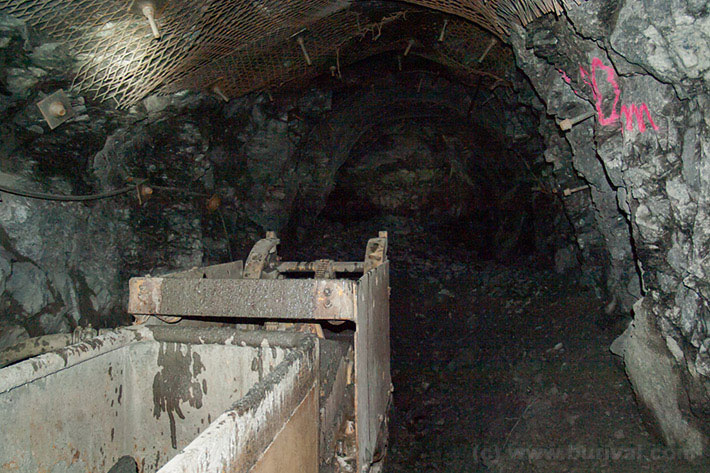 There were several stages of mineralization: for simplicity we will consider three major periods. The first are quartz-sulfide and carbonate-sulfide formations. The main minerals from this stage include quartz, calcite, siderite, ankerite, pyrite and, less commonly, sphalerite, galena and others. Pre-uranium minerals are probably of prevariscan age. 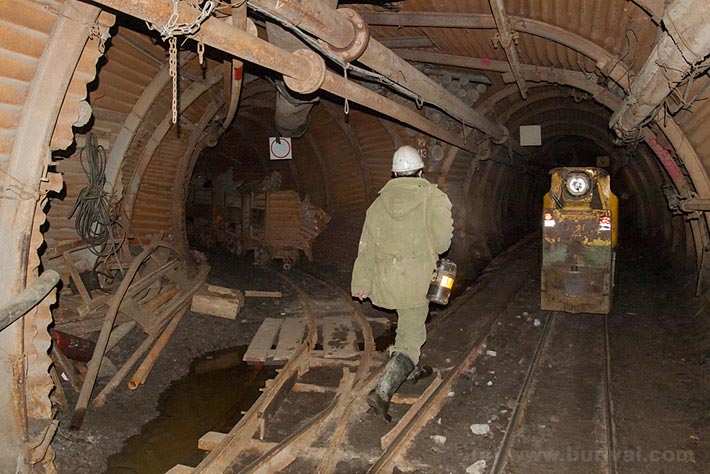 The uranium mineralization itself is connected to the huge N-S mylonite zone, in which it forms impregnation or zones within metamorphic or granitic rocks. Most of the uranium precipitated directly inside the fault zone and perpendicular shears. Heavily altered porous rocks around this fault zone also contain a significant amount of uranium minerals. The uranium ores are represented mostly by uraninite, antraxolite and brannerite. Less common is coffinite and in deep parts of the deposits also U-rich zircons or U-Zr silicates are present. Very interesting were selenides, which were unfortunately found in already abandoned parts of the mine. Most of the uranium ores are variscan but some parts were remobilised at least once. 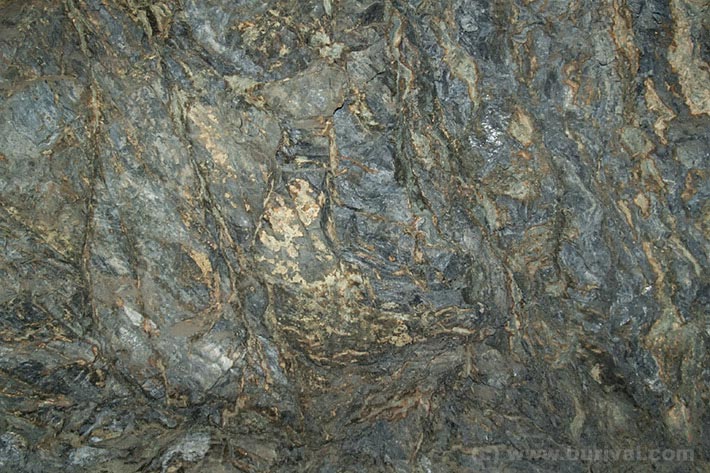 Rich uranium ore part inside the mine. The black material is mostly graphite with some uranium minerals, yellow coatings are ochres after decomposed pyrite. Photo: Zbyněk Buřival

The post-uranium mineralization is triassic in age, and includes an abundance of calcite, quartz and various sulfides like pyrite, chalcopyrite, chalcotite, arsenopyrite, sphalerite and galena. Collectors might also find zeolites like harmotome. 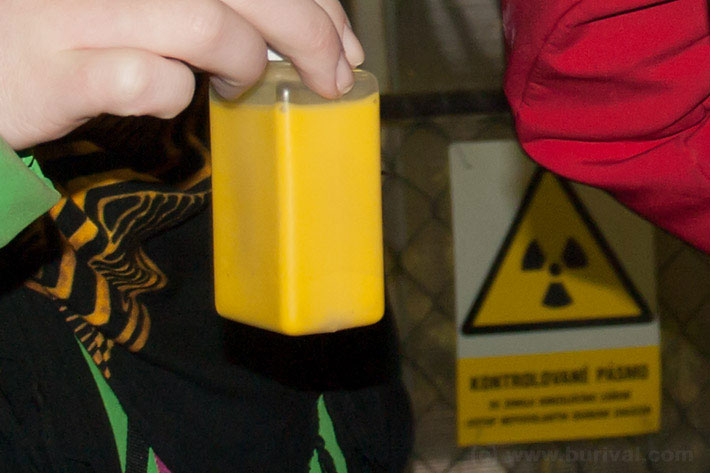 Generally, the Rožná deposit is not a very nice locality for collectors. Most uranium ores are just microscopic impregnations: veins with pockets are very rare. The better shallow parts of the mine are long abandoned and deeper parts lack interesting minerals. 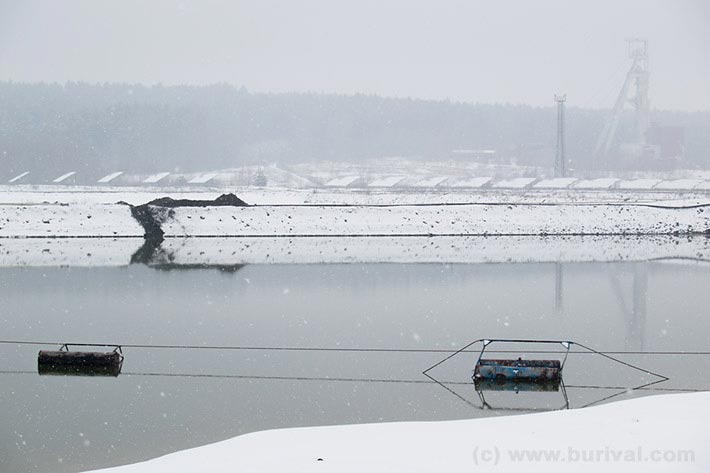