Wavellite normally occurs as a secondary product in the near-surface environment in phosphate-bearing rock. Specimens can be spectacularly beautiful as radiating starburst or spherical clusters. Wavellite spheres - and especially the colored varieties - are very popular among mineral collectors. 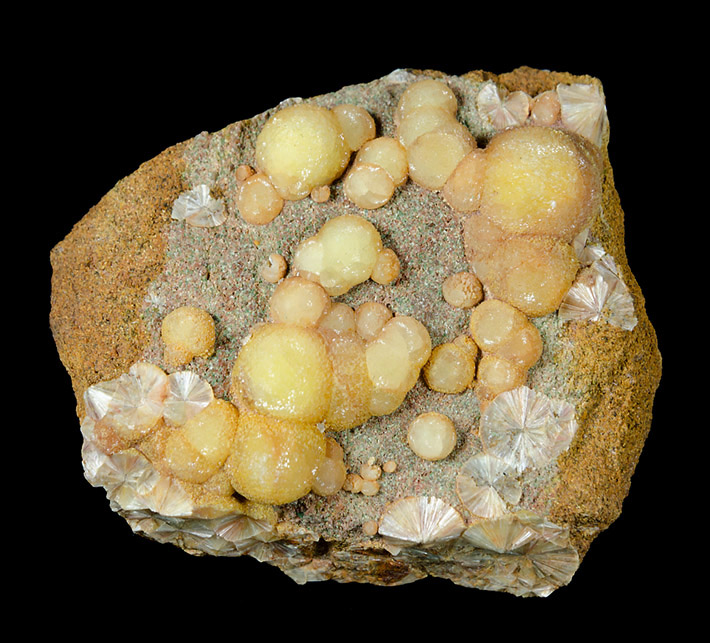 Wavellite structure can easily accommodate trivalent iron or vanadium, which results in bright colors. Allanpringite is an analogue of wavellite with Fe3+ substituting for Al3+.

Wavellite is closely related to fluorwavellite, Al3(PO4)2(OH)2F.5H2O; the only difference being in the fluorine content. These two minerals can't be distinguished without chemical analyses. Based on the IMA 50 % rule, all wavellites with more than 0.5 apfu of F are fluorwavellite. 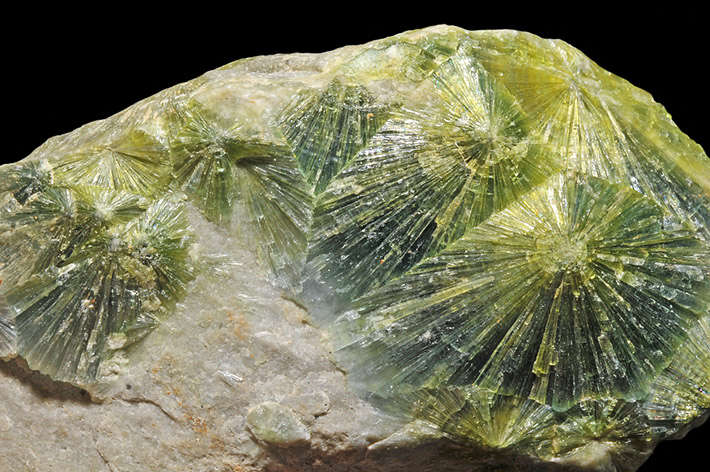 Wavellite has perfect cleavage on {110}, good on {101}, and distinct on {010}. It is translucent. Its luster is variously described as vitreous to resinous, greasy or pearly. Its fracture is uneven to subconchoidal; the mineral is brittle and, as noted above, cleavage intersections can create fibrous fragments. Its hardness is 3.5-4.0. Its streak is white and its density is 2.3-2.4.

Wavellite occurs in association with many other phosphates in fractures in peraluminous metamorphic rock, in hydrothermal areas and in lateritic phosphate deposits. These include variscite, various crandallite-group minerals, strengite and cacoxenite. Less often, it can be associated with secondary ore phosphates like chalcophyllite or turquoise. 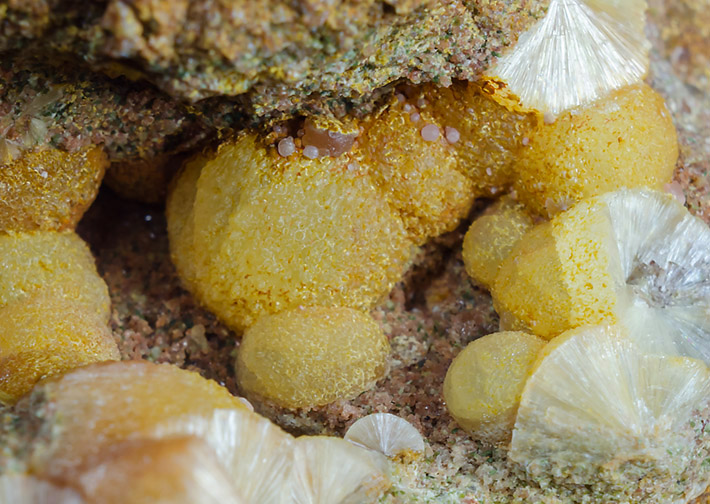 Variscite is an aluminum phosphate formed by direct deposition from phosphate-bearing water in reaction with near-surface aluminous rocks. Crandallite is a calcium aluminum phosphate usually occurring as subordinate white veinlets within variscite fracture fillings. Strengite is a rare pink to purple iron phosphate found in highly acidic, low-oxygen environments. Cacoxenite is an iron-aluminum phosphate which degrades the quality of the iron ores it is associated with.

William Wavell (1750-1829), an English physician, botanist, historian, and naturalist discovered and described the mineral in 1805 in the High Down Quarry, Filleigh, Devon, England. William Babington (1756-1833), an Anglo-Irish physician and mineralogist, named the mineral wavellite in Wavell's honor. Babington's fame rests on his having been a founding member of the Geological Society of London and the curator of one of England's largest mineral collections. There are non-contemporary reports suggesting that Wavell was singled out for recognition for having discovered the presence of phosphate in the mineral. 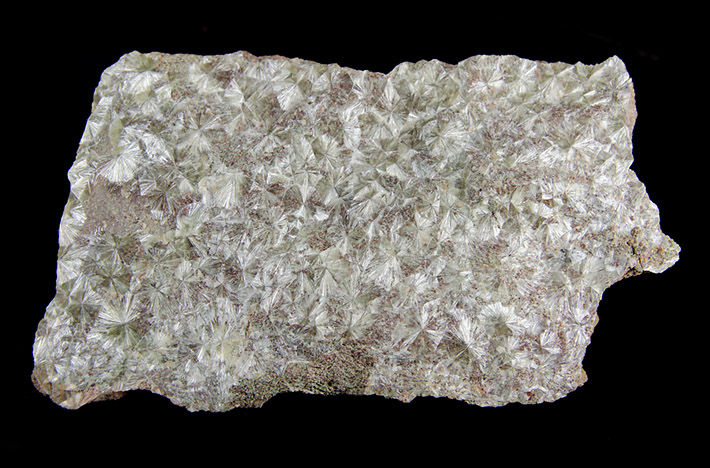 Wavellite is a secondary mineral found most often in aluminous, low-grade metamorphic rocks. It can form even within marine sediments, where phosphorus is leached from shells of dead organisms and transported by groundwater. Mixed with aluminum from clay minerals, it forms wavellite or other common aluminum phosphates. 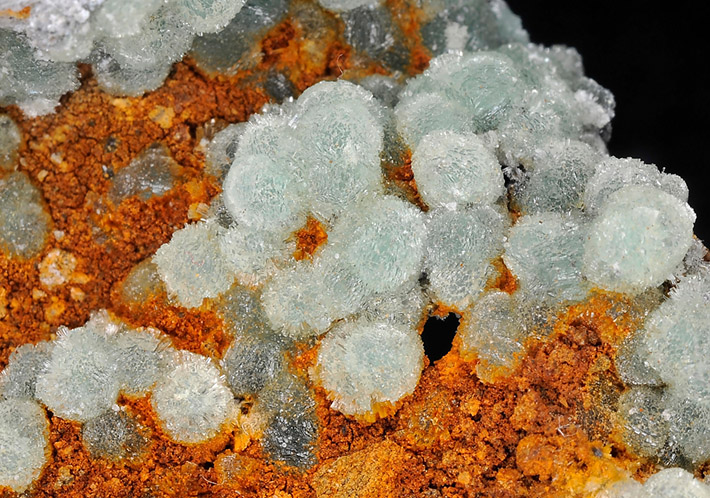 Secondarily, it occurs as in hydrothermal deposits and in accumulations of phosphate sediments. Formation of wavellite requires a low pressure, non-acidic environment, with available aluminum, phosphorus and fluorine.

Wavellite's value lies in its beauty as a collectible gemstone. In particular, blue and green varieties - forming zoned sprays or spheres in rock fissures - are highly valued by collectors.

While wavellite can be breathtaking as a pristine specimen, its radiating splintery form can make it very difficult to cut. Individual crystals are too small, such that faceting a sample is virtually impossible. Some massive specimens can be polished into cabochons (polished but unfaceted shapes) with a nice chatoyant effect due to its fibrous structure. 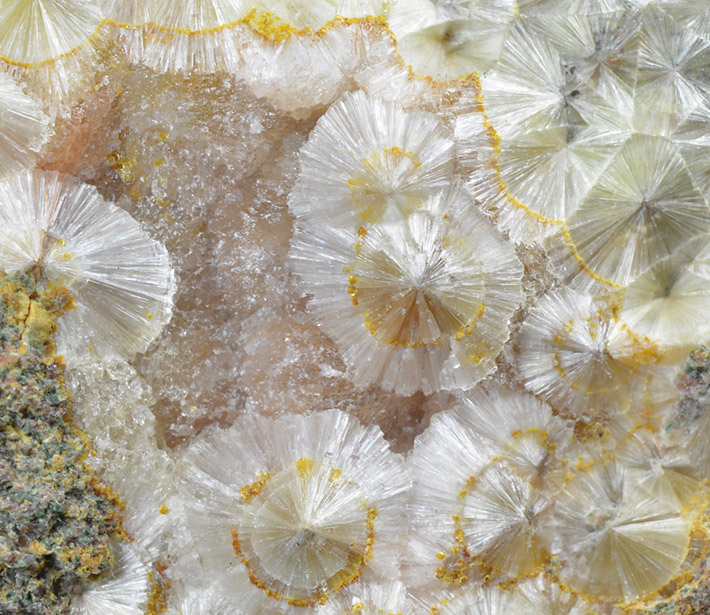 The softness of the material makes contact scratches a constant worry: rings require protective mountings, and earrings and pendants are the only plausible items to fabricate.

Wavellite is widely distributed in the world, with an exceptional number of sites reported from Europe and the U.S:

In England, in the High Down quarry, Filleigh, near South Moulton, Devon (the original discovery site). In Ireland, at Clonmel, Tipperary. In Belgium, near Bihain (featuring large rosettes). In France, at Montebras, Creuse. White or pale yellow wavellites are known from Cerhovice, Trenice and Milina, Czech Republic. 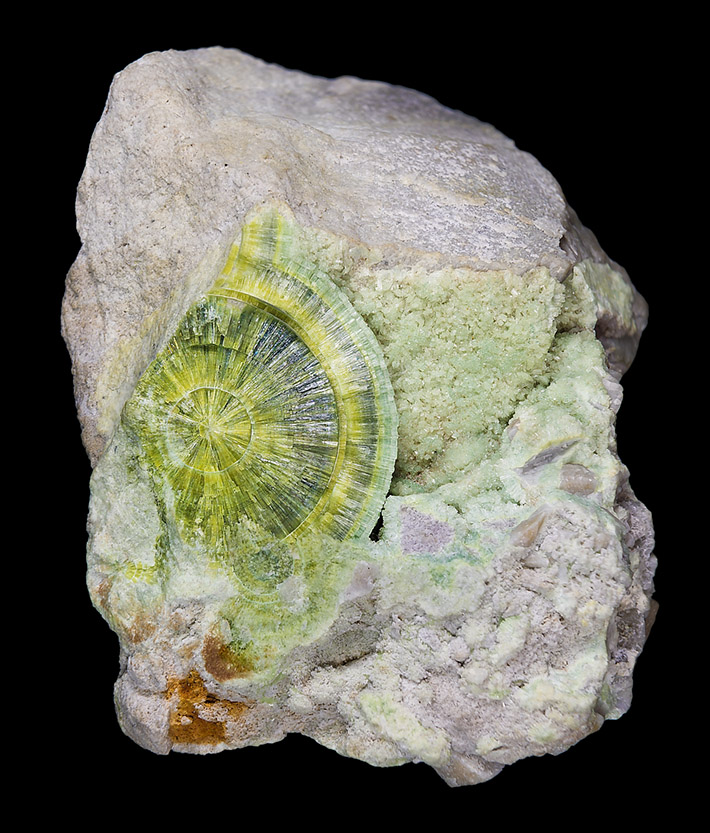 In Germany, in the Rotlaufchen mine, Waldgirmes; at the Dunsberg, near Giessen; from Oberscheld, near Dillenburg; and elsewhere in the Lahn-Dill area, Hesse; on the Wachtelberg, Langenstriegis, west of Freiberg, Saxony; from the Lichtenberg quarry, near Ronneburg, Thuringia; and elsewhere.

In the U.S., at General Trimble's Mine, Chester County, Pennsylvania; in the Wood mine, Cocke County, Tennessee; abundant around Avant, as on Dug Hill, Garland County, and from the Mauldin Mountain quarry, near Mt. Ida, Montgomery County, Arkansas; in the Willard mine, Willard district, Pershing County, Nevada.

In Bolivia, fine examples from Llallagua, Potosi, and Oruro. In South Australia, at the Moculta phosphate quarry, northeast of Angaston, and the Iron Monarch quarry, Iron Knob, and elsewhere in the Flinders Range.