Chalcedony is very variable and versatile stone and occurs in many environments. It was used since prehistoric times for stone tools and became one of the most used gemstones. Despite its abundancy, chalcedony still has some secrets.

Chalcedony is not a scientifically recognized mineral, since it is a cryptocrystalline variety of quartz. Similar to alpha (lower) quartz, chalcedony sports a trigonal crystal system. The chemical composition of chalcedony is the same as that of quartz - SiO2, or silicon dioxide. Its crystals are only able to be seen when it is viewed under a microscope. Its appearance, to the naked eye, makes it seems like it contains no crystalline structure whatsoever. Chalcedony forms botryoidal, rounded, mamillary or stalactitic aggregates, and it is common to find geodes filled with chalcedony. 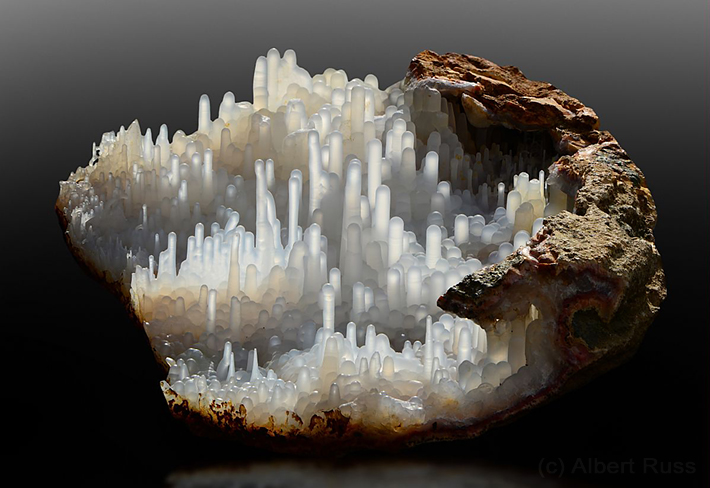 Tiny chalcedony crystals form microscopic fibres aligned along the c-axis. The microcrystals stacked perpendicular to the c-axis are called length-fast chalcedony. The microcrystals stacked parallel to c-axis are called length-slow chalcedony, or quartzine. Both of these chalcedony forms are often intergrown, but quartzine is far less common. Chalcedony also often contains monoclinic SiO2 called móganite (usually up to 20 %). Móganite is unstable and slowly recrystallizes into normal quartz. A small amount of water is also often present in the chalcedony structure. The water is partially absorbed into the fibrous microstructure and partially incorporated into the structure as Si-OH bonds. Chalcedony might seem to be a simple mineral, but its structure still contains a lot of scientific mysteries.

The colors of chalcedony are as varied as the shades of quartz, but they do present themselves a bit differently. Chalcedony may be found in multicolored, banded, or colorless variations; it may be red, yellow, orange, blue, green, purple, pink, gray, brown, or white. Depending on the bodycolor of the type of chalcedony, the stone may be opaque or transparent. Most often, its luster is waxy, dull, or vitreous, but rarely, it may appear iridescent. Chalcedony appearance is very similar to the amorpheous (non-crystaline) form of silica - opal.

Chalcedony has conchoidal fracture and no cleavage. Its specific gravity is about 2.6-2.7 g/cm3 and it registers a 6 on the Moh's scale of hardness. Many forms of chalcedony display yellowish or greenish fluorescence in UV light, but pure chalcedony is not fluorescent.

Chalcedony usually occurs in low or medium temperatures, and it is a very commonplace mineral. It is often present in hydrothermal veins, although that is not the only instance of its natural formation. It may also be found in volcanic rocks as fillings in veins, in volcanic bubbles called geodes, in limestone layers, in sandstone as cement, and as an agent of fossilization. 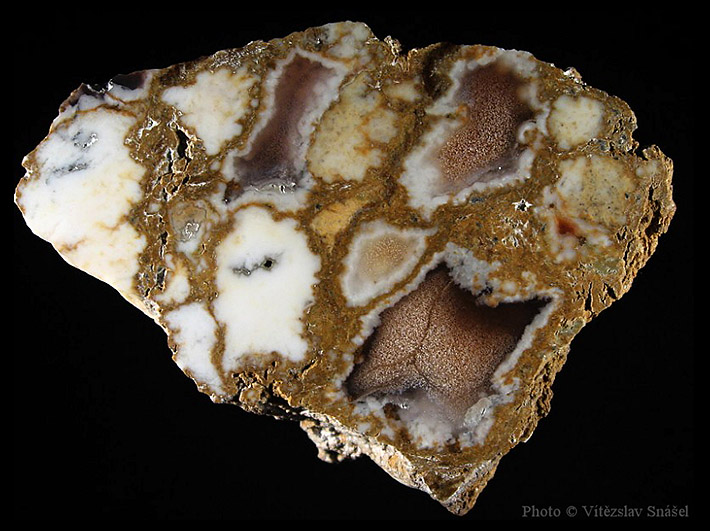 Chalcedony forms in a wide variety of geological locations. It may create stalactites or layers of filling in rock cavities and geodes. When naturally-occurring silica gel is present with water and at a low to mid temperature, chalcedony forms. It is uncommon in metamorphic and igneous rocks, but it does still exist in warm veins of watery silica. 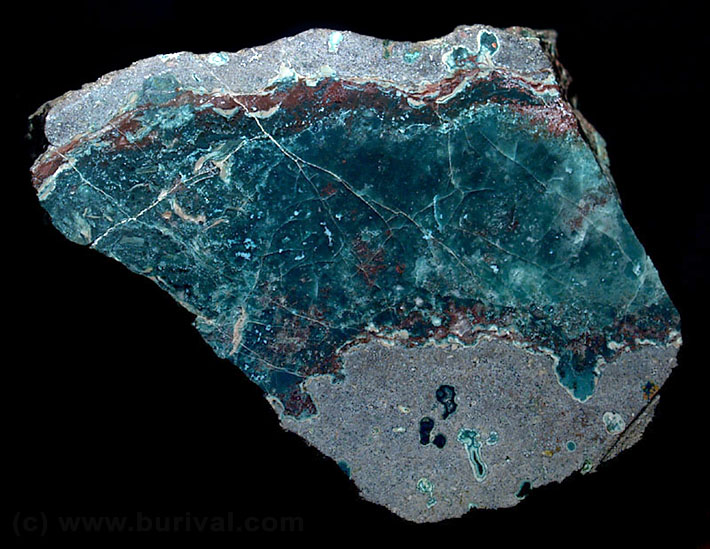 Chalcedony was first discovered in Istanbul, in Turkey, and was named for the Chalcedon area in which it was found. Chalcedony is often connected with occurence of agates in volcanic rocks. The most important chalcedony locations include agate fields in Brazil, Uruguay, Morocco, Mexico or Malawi. Deccan trap basalts in India usually lack agates, but have yielded some very nice chalcedony specimens together with zeolites. Famous chalcedony-replaced corals are from Tampa Bay, Florida. Awesome fossilized woods made of chalcedony occur in the Petrified Forest in Arizona; lesser-known huge fossilized wood comes from Mongolia. Most of the petrified wood found worldwide is fossilized by chalcedony or opal. Very nice flint comes from Rugen Island in Germany as well as many other sites in creatceous sediments along the German, French and British coast. One famous chrysoprase location is in an abandoned nickel mine in Szklary, Poland. 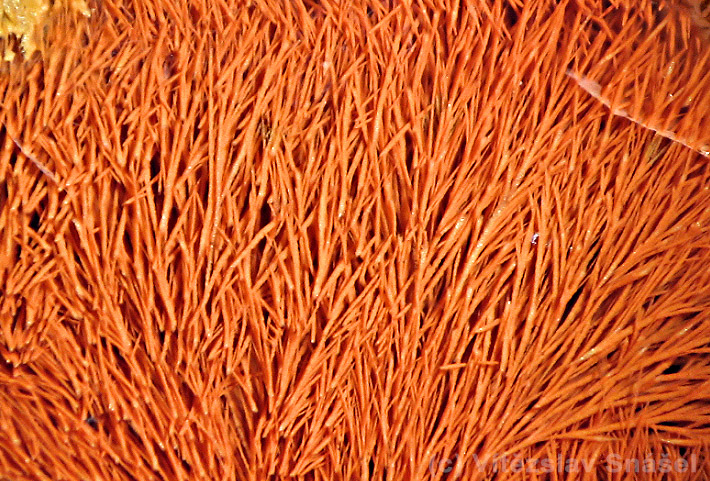 Chalcedony comes in many forms and colors, and therefore there are many different varieties of this stone. There is often no solid definition for one particular variation of chalcedony. Many locations have specific labels for their varieties, so that a stone may be called jasper in one place and agate or bloodstone in another. The following list contains only the most widely used and recognized varietes.

Bloodstone (or heliotrope) is a unique variety of chalcedony, usually covered in red spots that resemble drops of blood. These markings stand out against the dark green bodycolor of the stone. Bloodstone forms when chlorite appears as an inclusion in chalcedony along with iron oxide impurities in the stone. The chlorite causes the stone's green color, and the impurities provide the "blood." 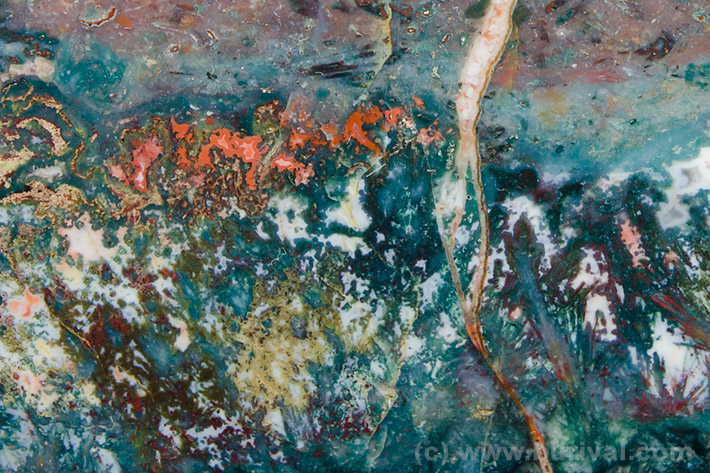 Carnelian is a vivid type of chalcedony, characterized by its bright and striking color, which can be orange, amber, or red. It is not a gem of high value, but it is still used in some jewelry regardless. Most of the time, carnelian presents a natural color, but many carnelians on the market are in fact dyed quartz or low quality chalcedony. 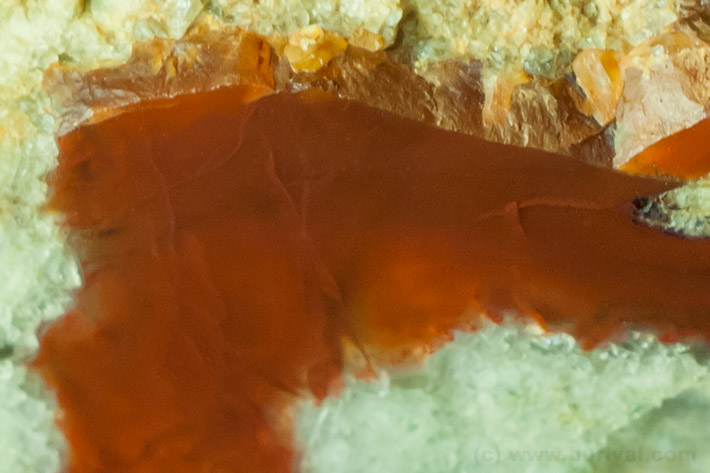 One very popular variety of chalcedony is the red, brown, or yellow stone known as jasper. This stone usually presents as multicolored, and features fascinating mottling, stripes, rings, and spots that are never quite the same in two separate stones. There are dozens of different trade names for jasper variations, depending on their colors or the types of inclusions they may feature. 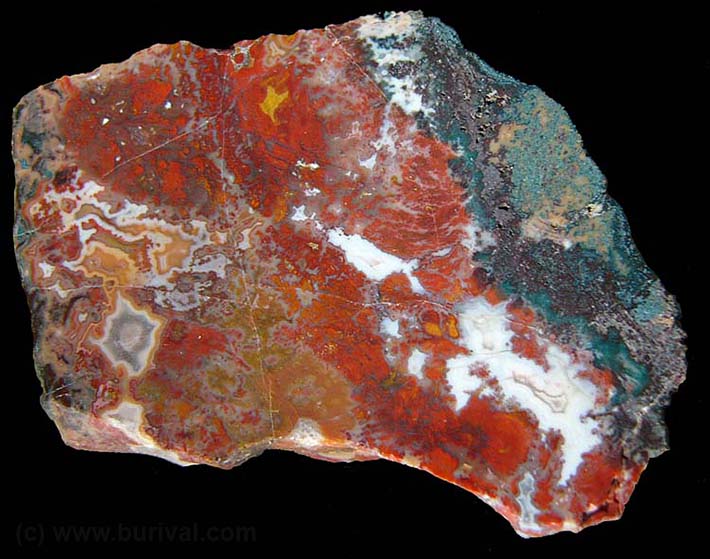 An uncommon type of chalcedony that many people have not heard of is the variation known as plasma. This dark green stone is usually opaque, which makes its red, yellow, or white spots stand out well. These spots are caused by impurities in the stone. Although its coloration is similar to bloodstone's, the two are different gems. In fact, plasma is not pure chalcedony, but a mixture of chalcedony, quartz and móganite. Unlike other chalcedony types - often connected with volcanic activity - plasma originates from the decomposition of mantle rocks called peridotites. While the peridotite decomposes, it forms serpentinite rocks and releases silica gels. These gels usually form abundant opals and, less often, chalcedony or plasma. 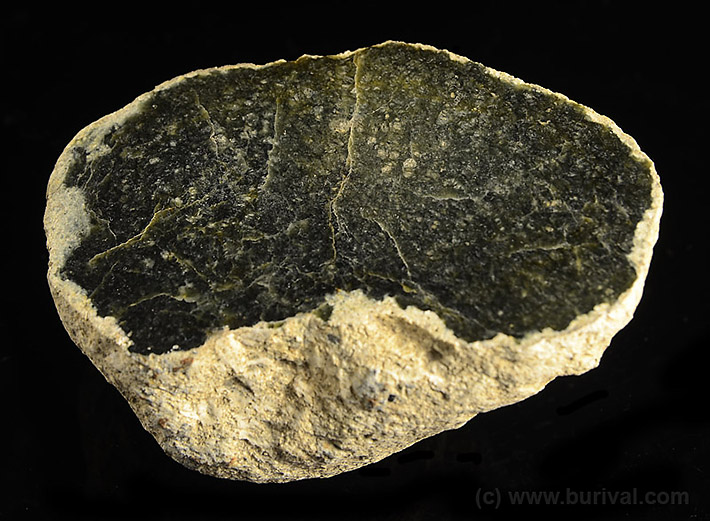 When nickel impurities are present in a chalcedony specimen, the result is known as chrysoprase. Chrysoprase can occur in a variety of shades of green, from a pale yellow-green mint to a deep apple shade. The darker shades of chrysoprase are commonly used in rings and necklaces, but if the stone is too dark, it becomes classified as prase and is no longer as desireable. Chrysoprase might be easily confused with apple green opals, also colored by nickel. 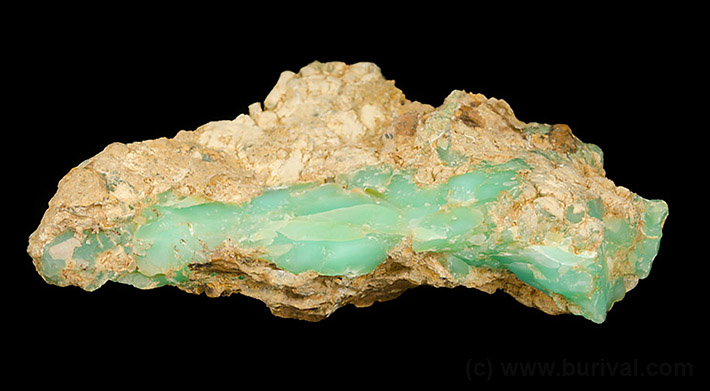 Chert and flint are often used as synonyms. Both names refer to an easily breakable sedimentary formation of chalcedony, which can be found in nodule form as well as in layered deposits or concretionary masses. Flint is a good quality variety of chert from chalks and limestones. It was used as a popular material for tools in prehistoric times. Chert is a broader term referring to any grayish, brown or black sedimentary types of chalcedony. Exact scientific classification of chert is still uncertain. It has mixed structure made of both microcrystalline quartz and microfibres of silica and thus can be classified also as a sedimentary rock. 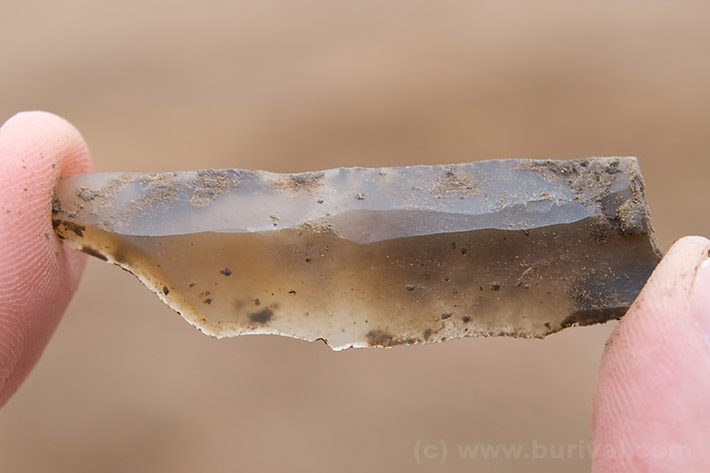 Tiger's eye is a popular chalcedony variant used in the making of beads and carved jewelry. It is not commonly used in cabochons or other cuts. When crocidolite absorbs quartz, this fibrous chalcedony is formed. The brown and yellow multicolored nature of this stone comes from its chatoyancy, which means that it has string-like inclusions making it resemble a cat's eye. 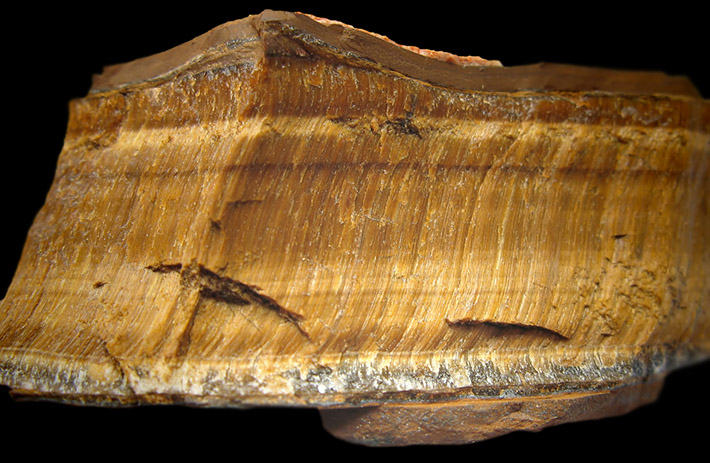 Hawkeye is very similar to tiger's eye, although it comes in blue-gray to blue-green rather than the yellow to brown of its cousin. Hawkeye, too, is formed when crocidolite becomes embedded with quartz over time, but the pseudomorph is incomplete. Thus, hawkeye is a mixture of fibrous asbestos with chalcedony. Like tiger's eye, too, hawkeye is chatoyant in nature.

Coral and petrified wood are organic gemstones, as opposed to the majority of others, which are mineral in nature. When a living coral dies in the ocean, pieces of it break off and leave the dead skeleton of the coral behind. The coral skeleton, which is made of calcite, is slowly replaced by chalcedony. It occurs naturally in white or the more commonly seen pink-orange. 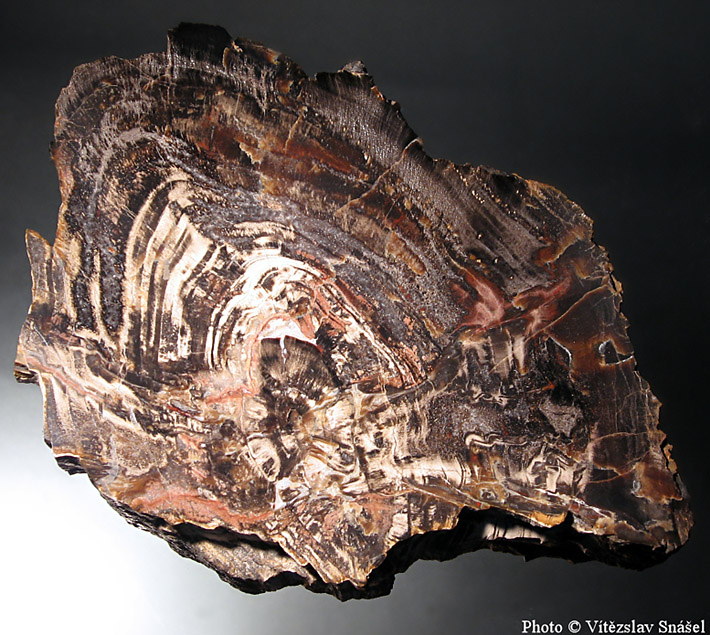 Petrified wood is similar, but different. It is organic plant matter that has been overtaken by a quartz - in this case, chalcedony - and fully fossilized. Over time, the organic material simply becomes replaced by the chalcedony. Both of these organic gemstones are popular for use in jewelry.

Strictly put, agate is not a true mineral but rather a mixture of various forms of quartz, chalcedony, opal, móganite and many impurities. But most of the agate mass is quartz and chalcedony, despite it can be many different layers with various colors or shapes.

Agate features banded patterns and a variety of colors, including red, blue, green, white, brown, purple, orange, pink, yellow, black, gray, and any combination of these colors. No two cuts of agate are exactly alike, making it an interesting stone for carvings such as statues or pins. 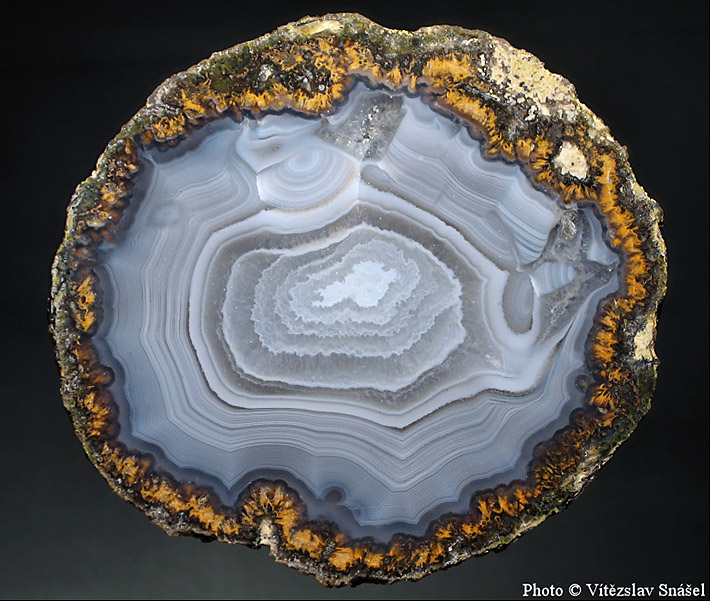 Agate is not made by chalcedony only. The various layers may consist of chalcedony, quartz and opal, and many agates may contain a hollow space inside that is filled with quartz crystals, calcite, or goethite. Unfortunately, most agates from Brazil are dyed - often with unnatural colors like bright pink, dark blue, green and many others. 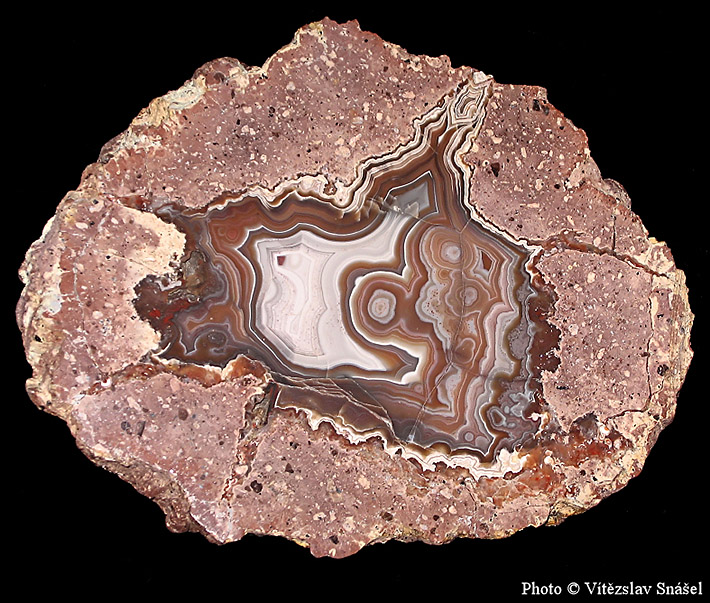 True agate is a typical geode or thunderegg (bubble in the lava) that is filled by layers of various SiO2 variations, mostly chalcedony and quartz. However, many dealers and collectors have created special types of agate like moss agate, feather agate and more, which do not have banding at all. These types of agate may as well be labelled jasper or chalcedony. 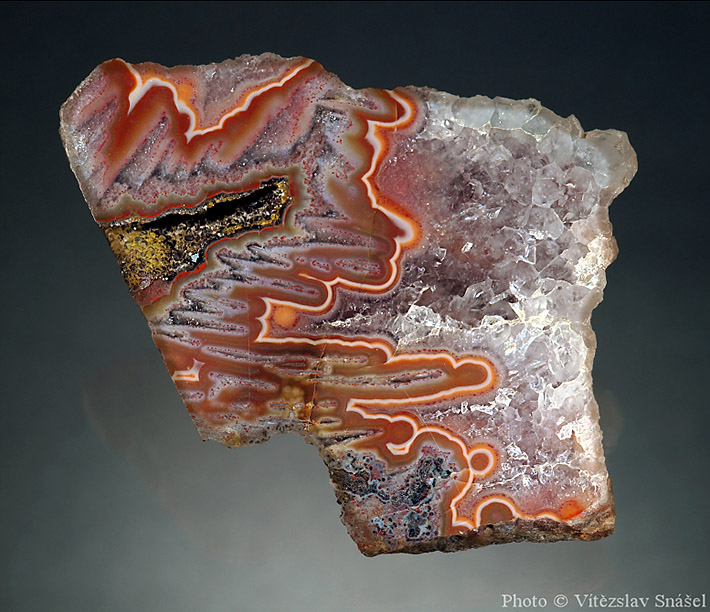 Vein material made mostly of quartz and chalcedony from Krusne Hory in Czech Republic and Erzgebirge in Germany is also called agate. However, most of this material also lacks banded patterns. There are so many sub-varieties and alternate types of agate that it requires its own special agate article.