The small town of Lom is located in southern part of Norway, just next to the famous Jotunheimen National Park. A very interesting mineral museum Fossheim Steinsenter is located at the western end of the town.

The most important part of the Fossheim Steinsenter is the rockshop at its entrance. It's in fact a pretty huge rockshop, with stock ranging from various carvings and jewelry to interesting collectors specimens. You will probably notice a lot of items made of a pink zoisite variety called thulite. If you have couple of hours and a car, you can visit thulite quarry in Lia, located about 12 km from Lom. The locality is private and there is a per-kilo charge for specimens. You can obtain the permit and directions at the desk in the museum, where you also pay for the specimens later. 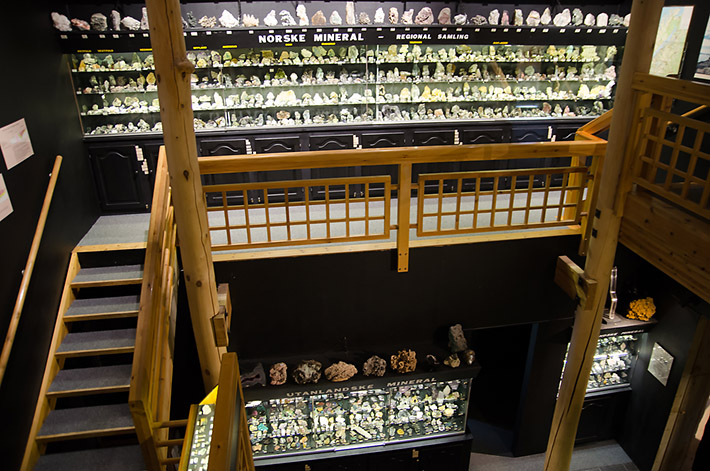 Overview of the part of mineral display.

The worldwide mineral collection is not bad, but it is not exceptional either. You will probably see better specimens at any of the major mineral shows. Unsurprisingly, the more interesting of the collections is the regional display of minerals from Norway. Many European collectors - and almost all outside of Europe - have very poor knowledge about Norwegian minerals. 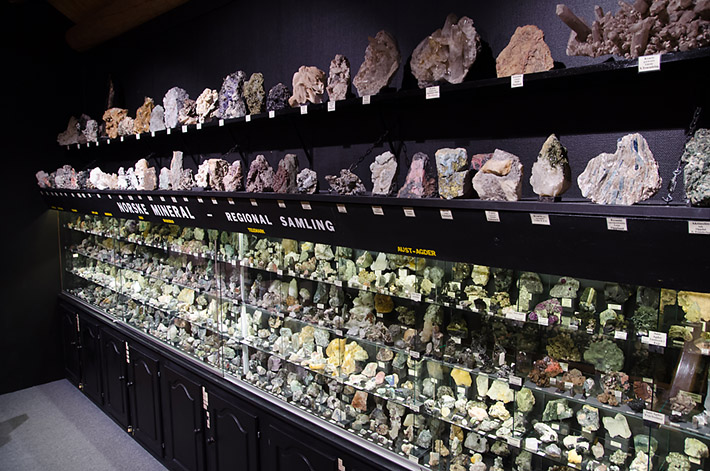 The mineralogy of the Norway is quite rich but - luckily - outside the radar of most professional mineral dealers. The overall population of Norway is quite low, especially outside cities in the south. Also, local mineral collectors are few and far between, which provides a great chance for the motivated collector to find really exceptional specimens. The word motivated should be noted: enjoying Norwegian nature also means trekking long distances through swamps, rain, mosquitos, cold weather and mountains. Some areas are very remote and some are on the private property. It is also quite difficult to get any decent information on where to dig - so it's back to the old school collecting with a lot of walking and exploration. 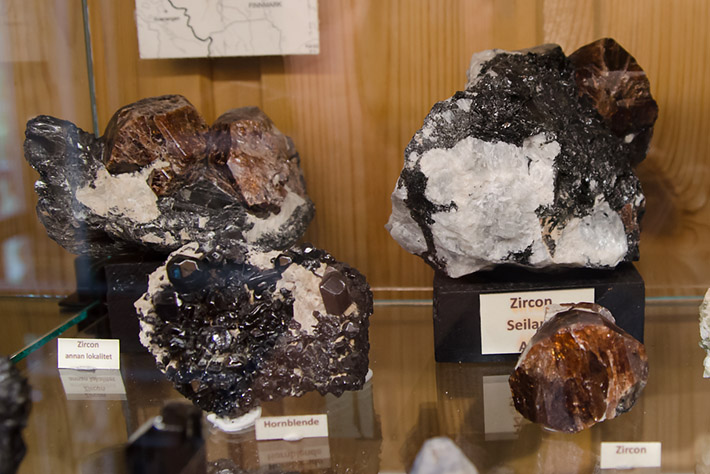 Most famous of Norwegian minerals is probably the excellent native silver from Kongsberg. Of course, your collection must include killer samples of anatase on quartz from Hardagervidda, with less common smoky quartz and brookite from the same area. Other iconic Norwegian minerals include huge zircons from Seiland, which recently became quite popular. Of interest are emeralds from Byrud and bright colored amazonite with huge flakes of lepidolite from hybrid LCT-NYF pegmatite in Høydalen. The pegmatite produced also fluorite, topaz, beryl, columbite, gadolinite, rare fluocerite and many other rare minerals. 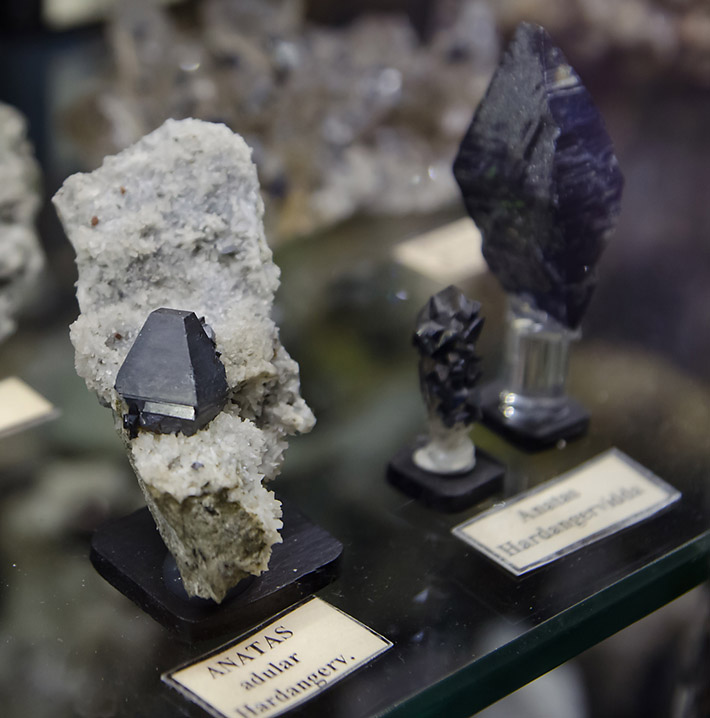 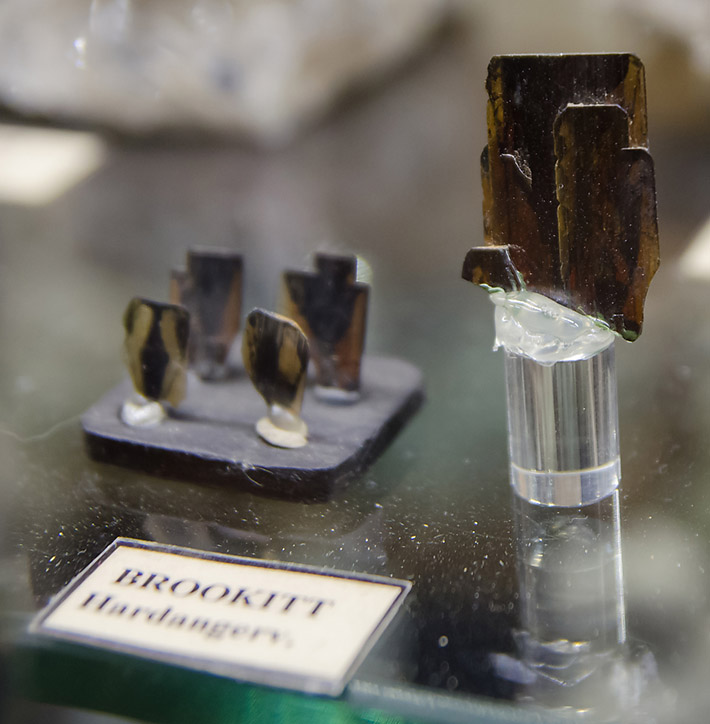 Rare finds of brookite from Hardangervidda are much less known then anatase. 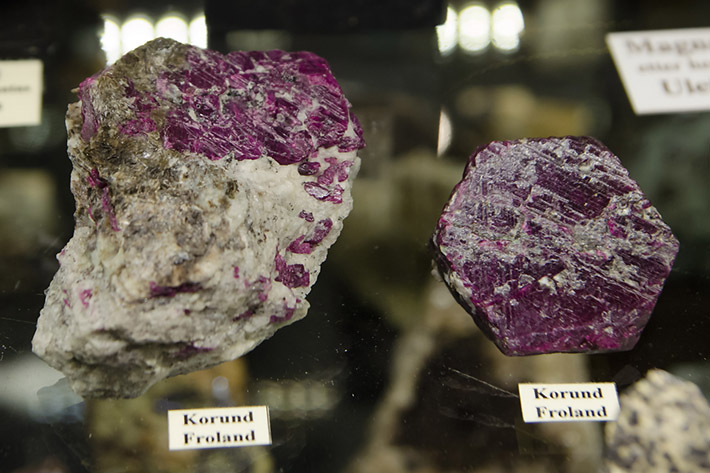 Rubies from Froland reach very impressive size but not the gem quality.

Zeolites as a late phase in many pegmatite pockets are quite widespread. Many Norwegian pegmatites produce rare REE-minerals in absolutely unbeliavable size and with well developed crystals. 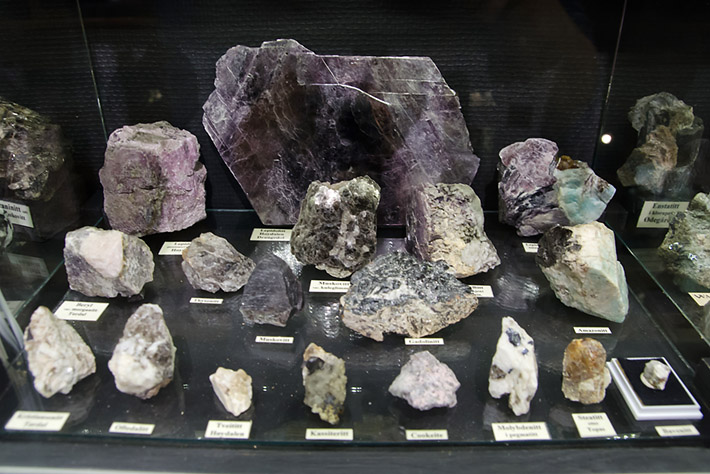 A large part of Norway is composed of various metamorphic rocks which produce nice and big garnets, kyanite, tremolite, aktinolite, diopside or zoisite. Norway is also home to a couple of emerald localities. Obviously, some metamorphic deformation lead to the formation of alpine type veins with pockets full of quartz, chlorite, anatase, brookite, titanite, prehnite and axinite. Actually, the museum's prehnite from Fauske is world class. 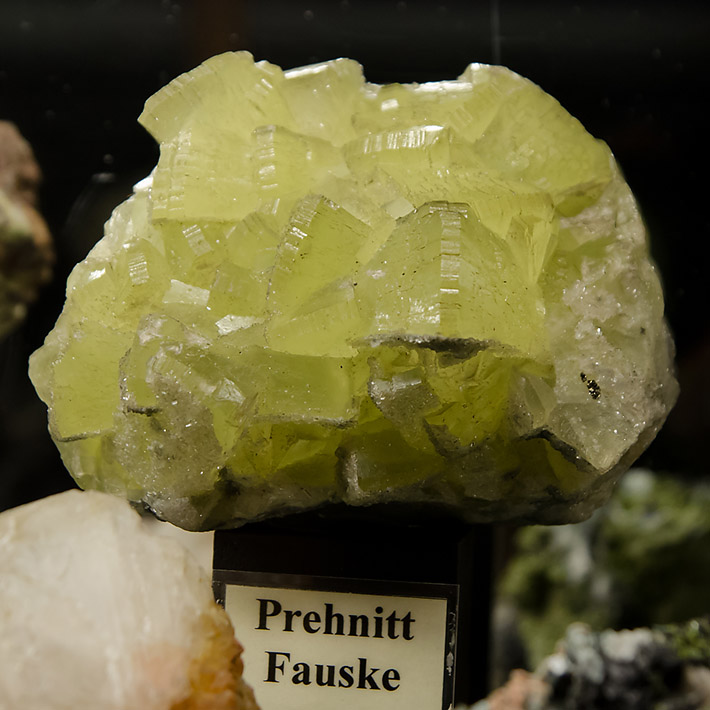 Quality and size of this prehnite from Fauske is amazing.

The museum also contains a pretty impressive library, especially if you speak Norwegian. A great deal of the literature is not available in any other language. You should definitely visit the museum if you travel through the Lom town: it is free and well worth it. If you have some extra time, do not forget to visit thulite quarry in Lia or look for pegmatites (with garnets and zircons) in Jotunheimen Mountains. Some parts of Jotunheimen are comprised of gabbro, lending them a very interesting texture. 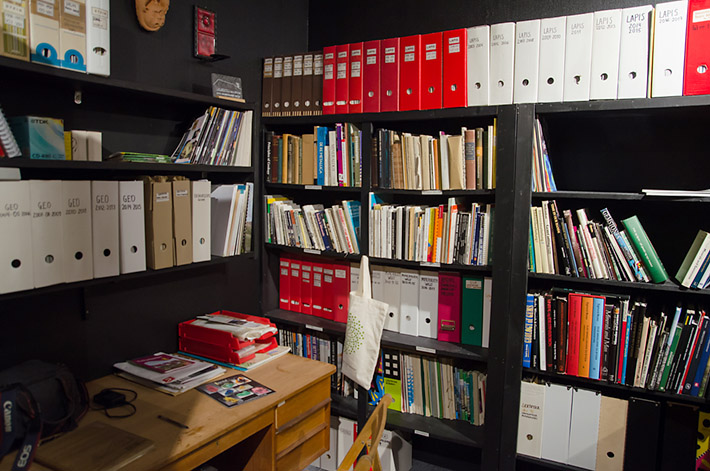 Selection of mineral books and magazines in the museum library. 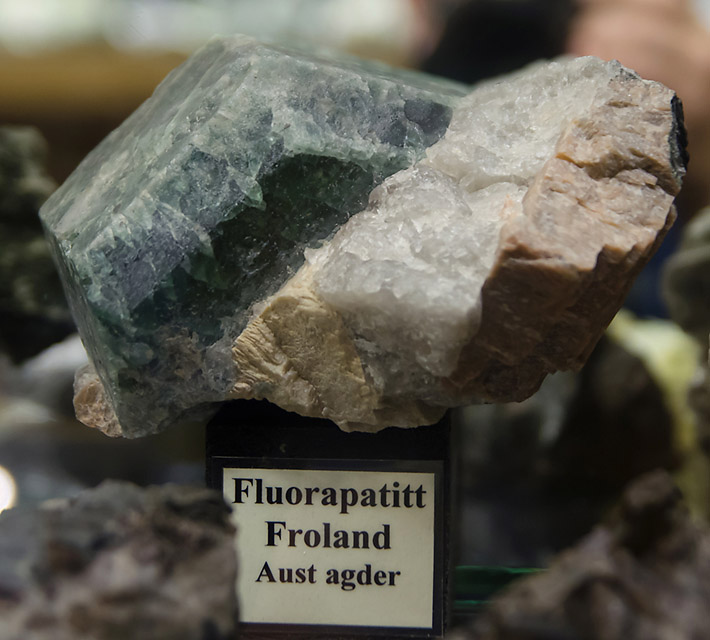 Huge fluorapatite from pegmatite in Froland. 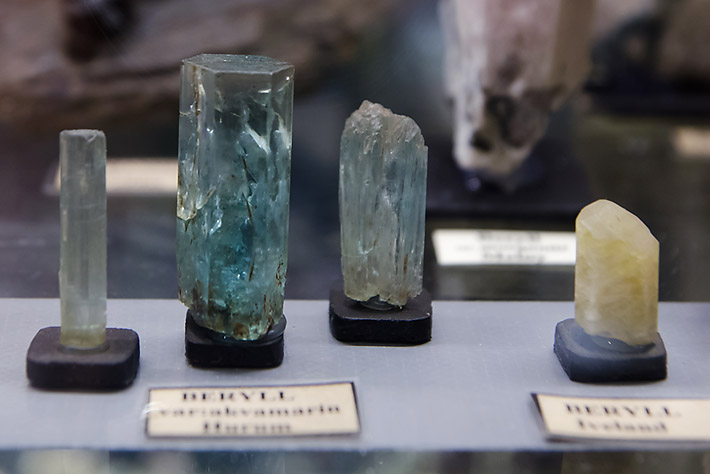 Gemmy aquamarines from pegmatite in Hurum. 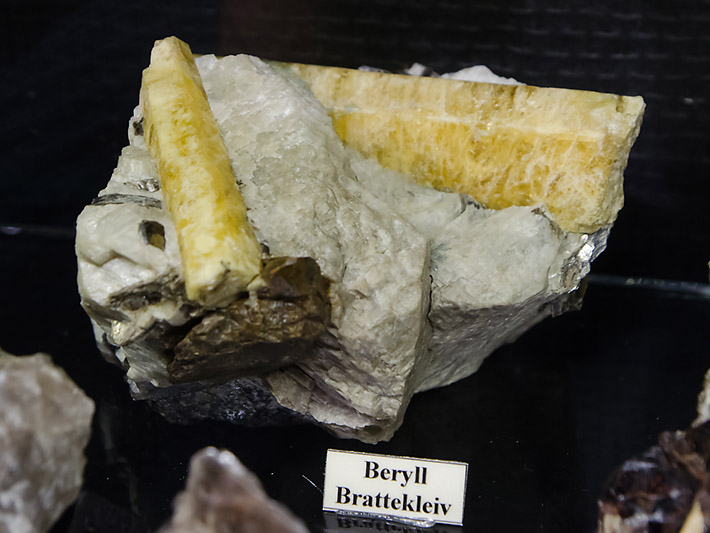 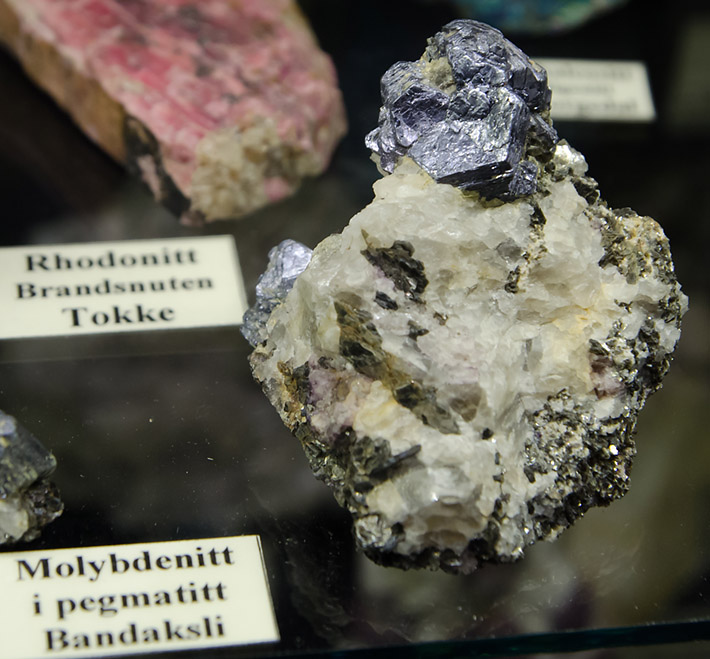 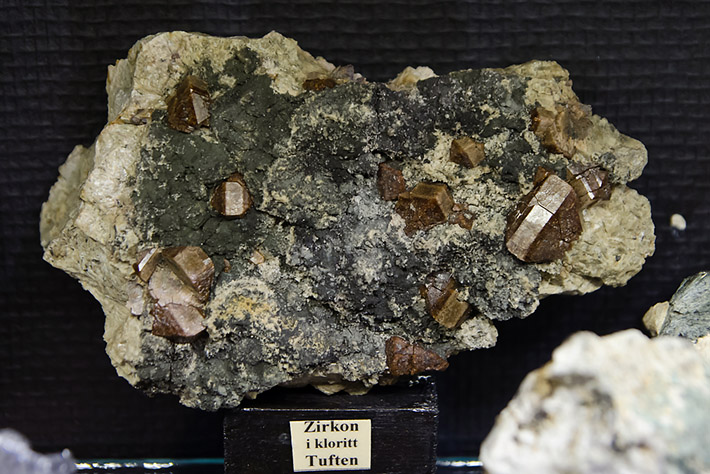 Zircon with chlorite from Tuften. 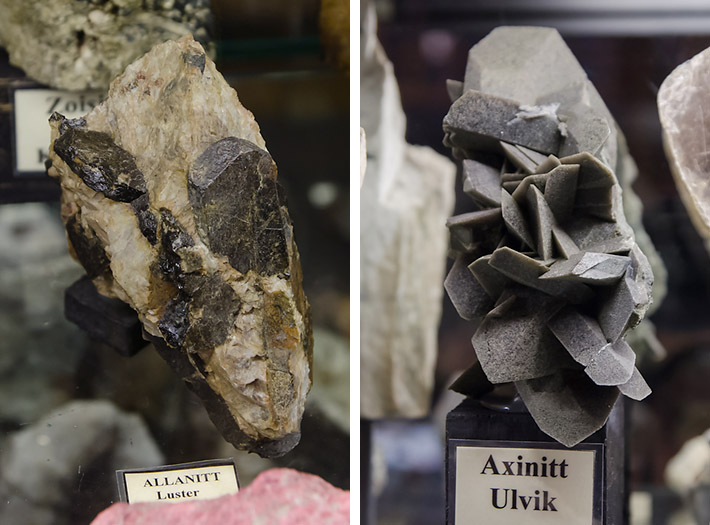 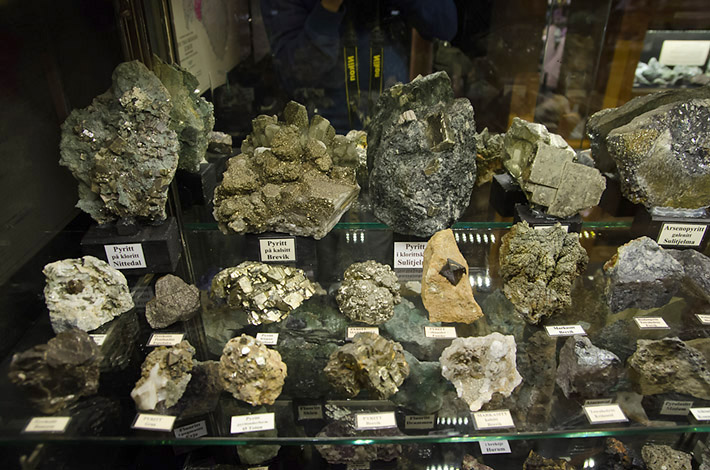 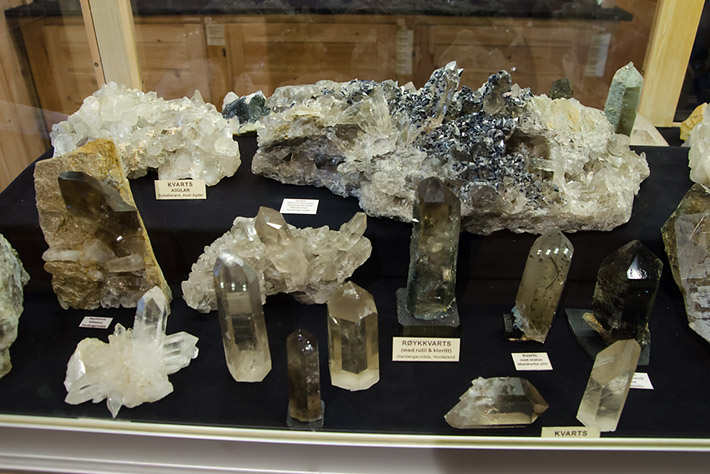 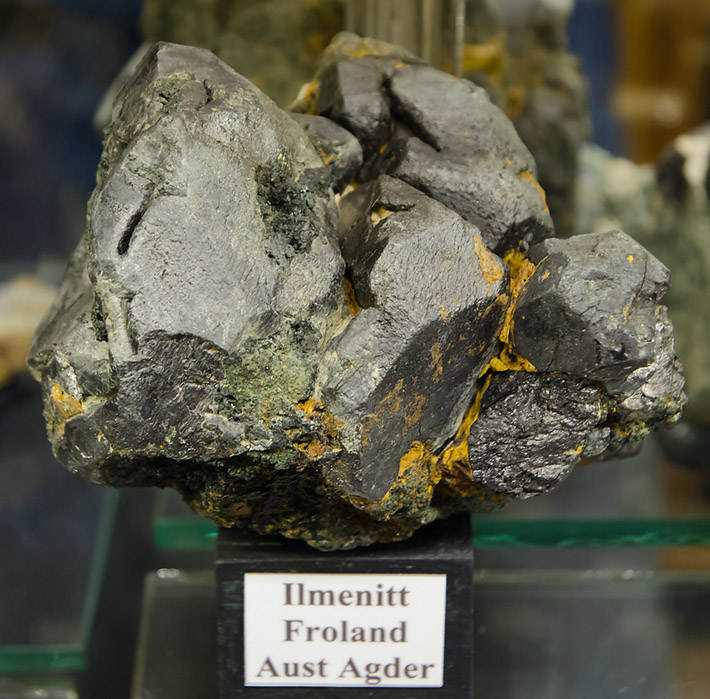 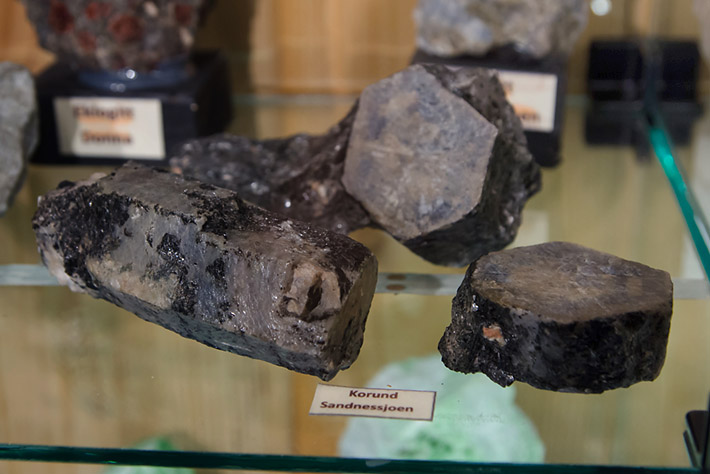 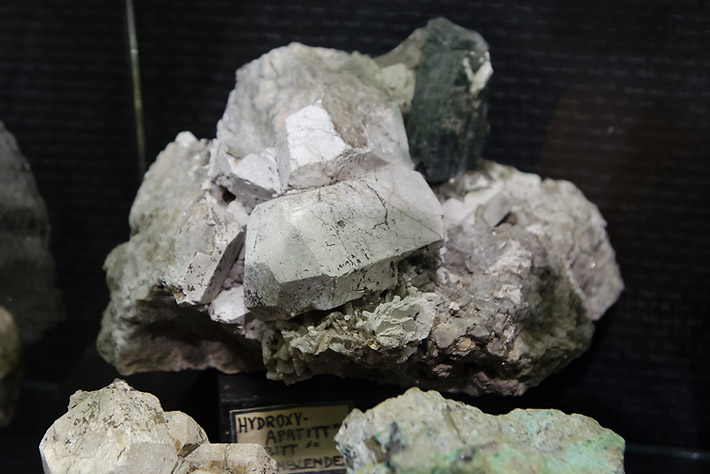 Hydroxylapatite with hornblende from Snarum.