Magnetite is an iron rich mineral from the spinel group. It is the most important industrial source of iron and a natural ferromagnetic substance. Magnetite is common, but it is a very nice and interesting mineral.

The magnetite chemical formula is Fe3O4, which is a simplified formula of iron dioxide FeO.Fe2O3. Magnetite contains both divalent and trivalent iron. Magnetite is part of the spinel group of minerals with the general formula AB2O4, where both A and B positions are occupied by iron. We can also rewrite the magnetite formula as a (Fe2+)(Fe3+)2O4. 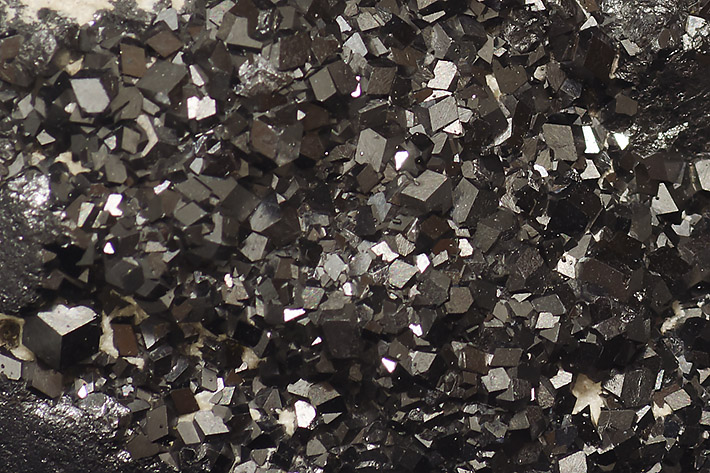 Crystals are mostly shaped as octahedrons or twins, with rhombic dodecahedrons being less common, and cubic crystals being very rare. Magnetite often forms masses of irregular, fine grained aggregates or oolites. Magnetite crystals are sometimes fully replaced by hematite. These pseudomorphs are known as martite.

Magnetite falls just about in the middle of the Moh's scale of hardness, registering between 5.5 and 6.5. Magnetite has a black streak, and it may present itself anywhere from gray-black to iron black in color. It is completely opaque, and it has a metallic luster. It also shows an indistinct cleavage and uneven fracture. 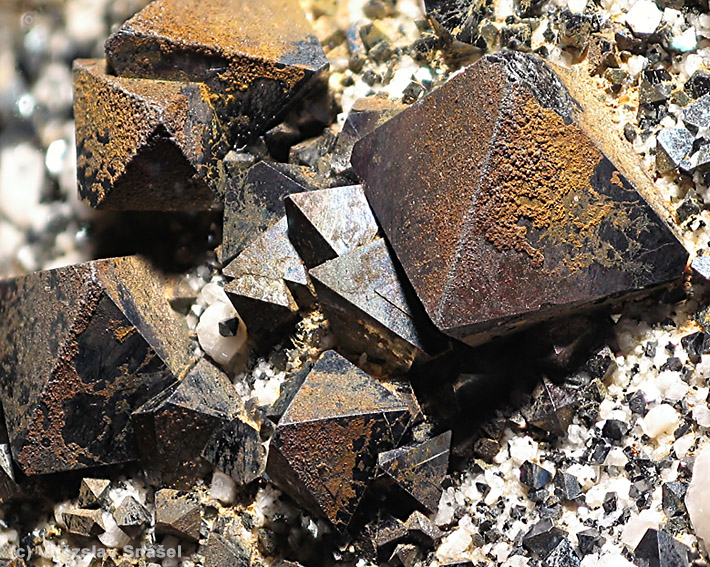 As the name suggests, the best diagnostic feature of magnetite is its magnetic properties, which are mostly permanent. Rocks with higher amounts of magnetite or even magnetite deposits can fool mechanic compasses, and in extreme case can even cause serious malfunctioning of machinery and electronics. One of these examples is the Magnitogorsk deposit in Russia, where literally a whole mountain is made of magnetite. One variety of magnetite with strong ferromagnetism is sometimes known as lodestone.

Magnetite can form in metamorphic, sedimentary, or igneous rock, and can take many different shapes and sizes. In plutonic igneous rocks, magnetite often exists as small, fine grains or small crystals. The exception are carbonatites, where individual crystals over 10 cm can occur. Some basic rocks like gabbros or anorthosites may contain significant amounts of magnetite. Less commonly, magnetite may have hydrothermal origins in alpine veins. 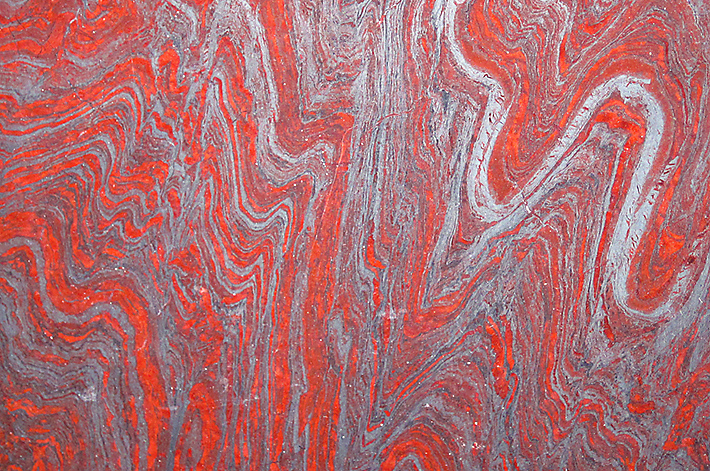 Sedimentary rocks that are rich in iron can be represented by abundant limonite, goethite or hematite in the sediment. Very fine grained iron minerals often form cement inside the sandstones, conglomerates or arcoses. When these sediments get buried deep into the Earth's crust and metamorphosed, ferruginous sediments reduce, leaving magnetite or a magnetite-hematite mixture behind. Banded metamorphic rocks with layers of magnetite are known as BIF - Banded Iron Formation. BIFs are among the biggest and most important iron ore resources.

Some submarine volcanoes also produce a significant amount of iron, usually in the form of sulfides like pyrite or marcasite. When these marine volcano sedimentary rocks get metamorphosed, other layered rocks with magnetite - known as Lahn-Dill - are formed. 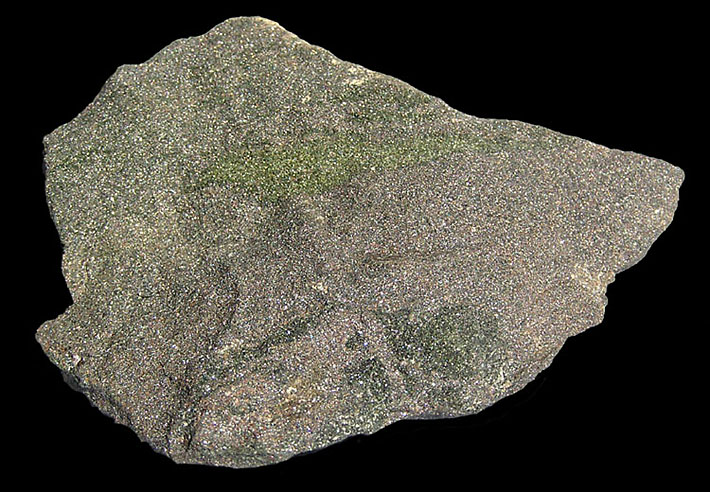 Some metamorphosed ultrabasic rocks decompose into talc, and amphiboles, or green schists, also contain magnetite. These rocks are very popular among collectors as they often contain very nice and big octahedron crystals of magnetite.

Other typical sources of magnetite are skarns, which are metasomatic rocks. Many skarns contain significant accumulations of magnetite aggregates. These deposits are usually too small for modern large scale mining. 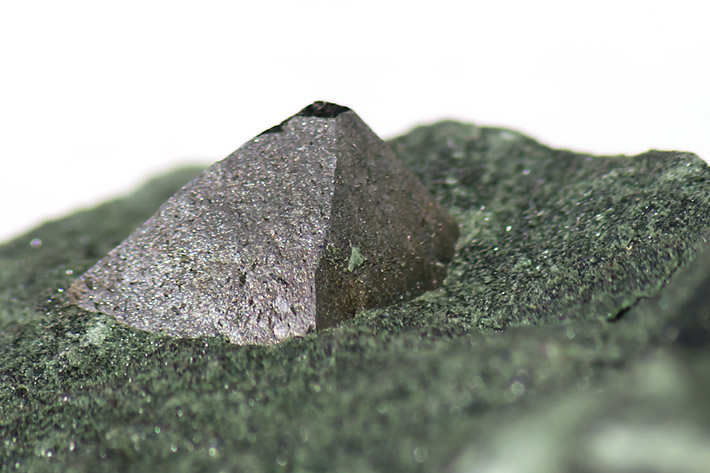 It is used in the production of ammonia, and it can be utilized as a sorbent in the removal of arsenic from drinking water. For similar reasons, as well as its resistance to bacteria, it is often found coating water containers, heaters, and boilers. Last but certainly not least, magnetite was historically used in the creation of audio recording tape, although it has since been replaced.

At present, some iron ore mining takes place in Iran, Venezuela, Kazakhstan, Sweden, South Africa, and Canada. Some larger mines may be found in the Ukraine, the United States, Russia, and India. The three main players in the world of iron ore mining, however, are Brazil, Australia, and China.

Massive magnetite specimens have been located in Atacama in Chile, the Pilabra region of Australia, the Valentines region of Uruguay, New South Wales in Australia, the town of Kiruna in Sweden. In Mauritania, the tallest mountain (called Kediet ej Jill) is a formation completely comprised of magnetite. Another magnetite mountain Magnitnaya was mined in Magnitogorsk, Russia. California and New Zealand have some occurrences of black sand that contains iron deposits. Sand dunes full of magnetite have been found in Peru. 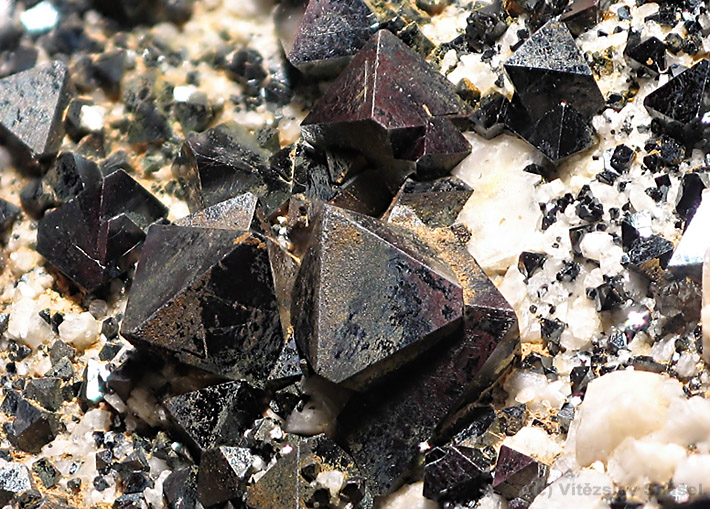