Melanterite is isostructural with other members of melanterite group and easily accomodates other divalent metals like Cu, Mg, Zn, Co and Mn. The most common variety accomodates higher amount of Cu (up to 30 % boothite CuSO4.7H2O component), known as cuprian melanterite. Some sources incorrectly mention chalcanthite component in melanterite, but chalcanthite is pentahydrate with triclinic struture.

Melanterite has vitreous to silky luster, it is transparent to translucent with white streak. The Mohs hardness is only 2, density is 1.9. Melanterite has conchoidal fracture and displays cleavage in two directions. Beware, melanterite is highly soluble in water! 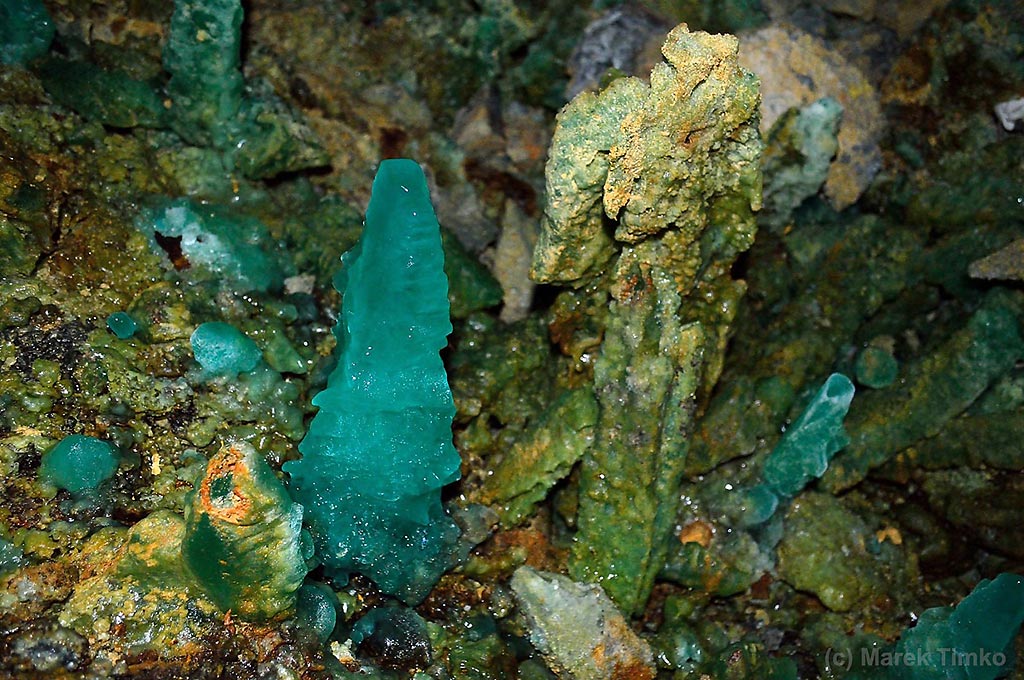 Fresh melanterite is always green. It tends towards blue-green hues with higher Cu amount in the structure. And it turns pale green to almost white when dehydrated – see chemical stability chapter bellow.

Melanterite is highly unstable material. It makes almost no sense to collect it as it requires very specific humidity and acidity. When removed from e.g. underground mines to the surface environment, it gets dehydrated and/or oxidized within hours or maximum few days. Melanterite specimens must be properly collected and conserved to preserve them, which is complicated and expensive process. 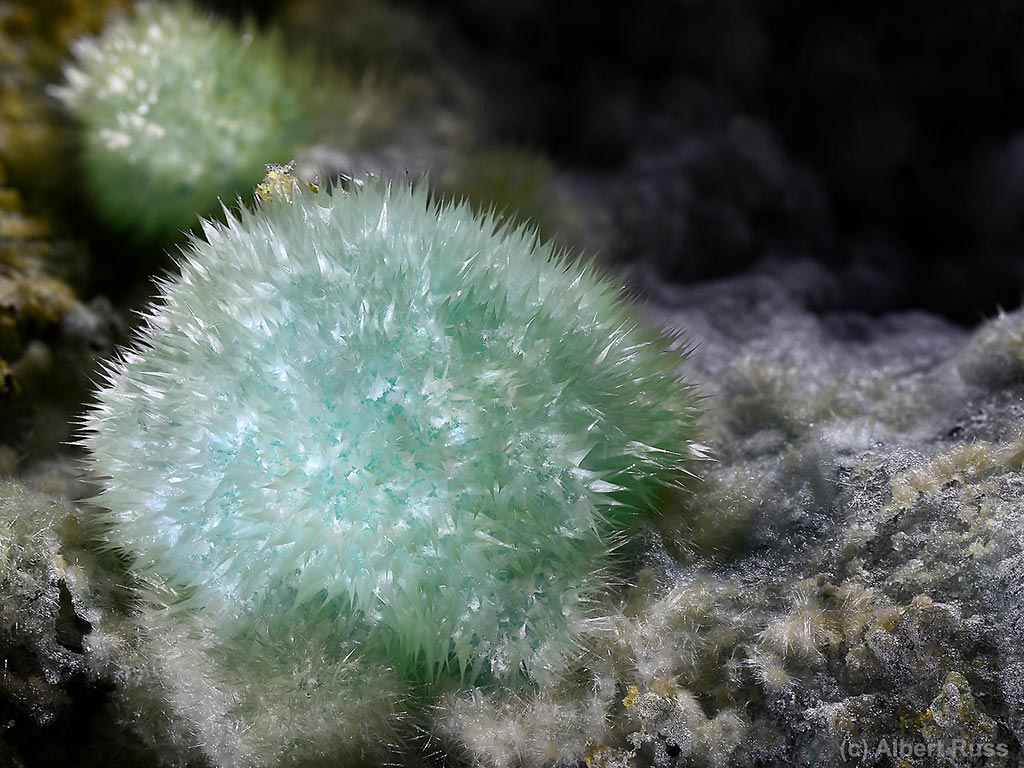 Divalent iron in melanterite is also very easily oxidized, which again results into decomposition of melanterite. There are various sulfates with varied amount of water and different ratio of Fe2+ and Fe3+ in the structure. These are further oxidized to pure Fe3+ sulfates and lastly converted to more stable Fe3+ minerals like goethite, lepidocrocite, or jarosite – depending on acidity of the environment and presence of water/humidity. 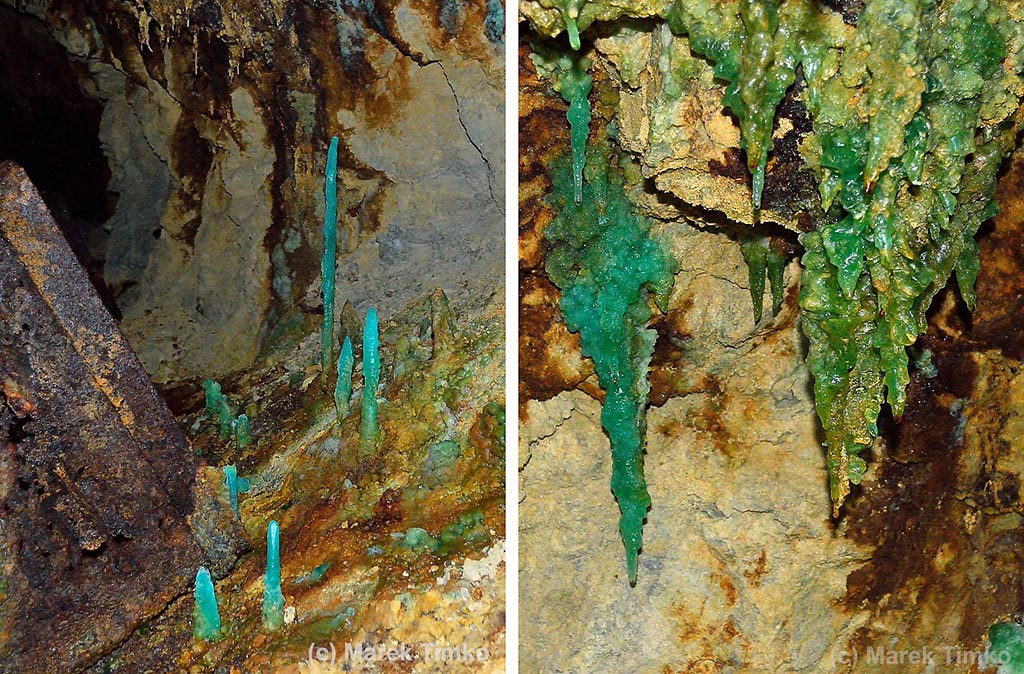 Fresh to slightly decomposed melanterite stalactites and stalagmites in the abandoned mines in Baiut, Romania. Both photos: Marek Timko

The most common melanterite origin is decomposition of iron sulfides, mostly pyrite and marcasite. Iron sulfide is oxidized to iron(II) sulfate, which is soluble in water. Decomposition of sulfides occurs in classic sulfidic deposits and also in various pyrite/marcasite rich sediments like coal or some shales.

Of course, the real oxidizing agent is not the pure oxygen and the sulfides mineral assemblage is very often quite complex. Real natural systems usually result in varied assemblages of secondary sulfates and other secondary minerals like carbonates, phosphates and oxides. 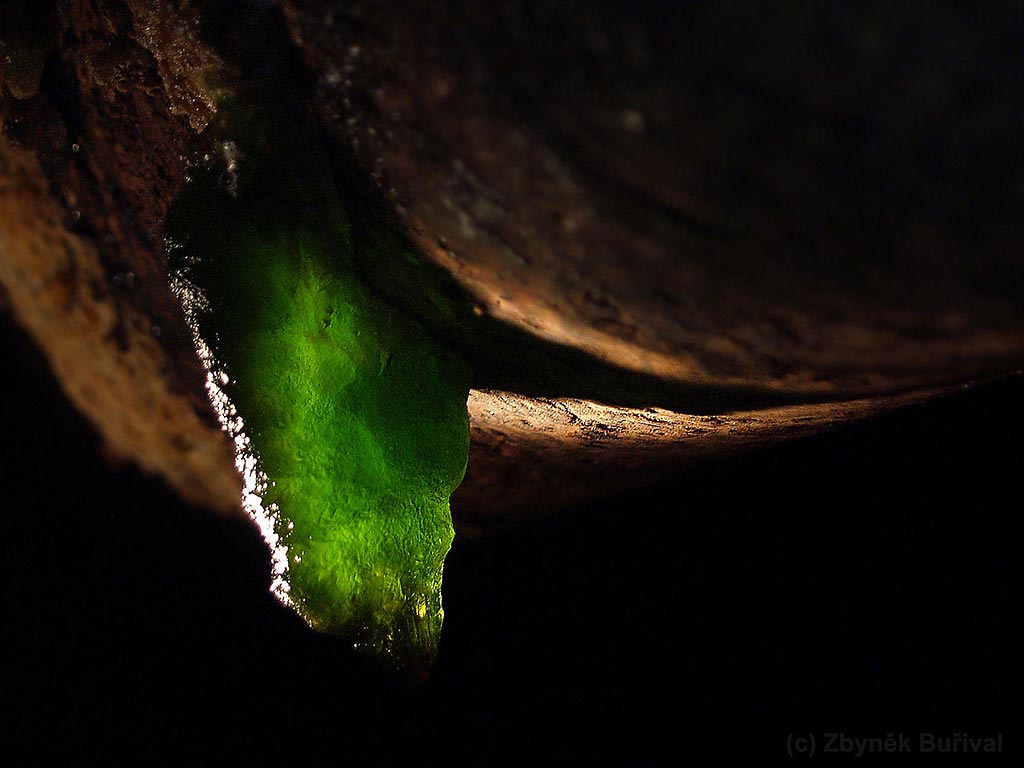 Melanterite stalactite hanging from the iron pipe in the underground mine in Jáchymov, Czech Republic. Photo: Zbyněk Buřival

Melanterite is often present only as a temporary mineral, its stability strongly depends on humidity, acidity and air flow. Crusts and stalactites of melanterite are constantly growing and dissolving, its presence in the underground mines is often shifting from one place to the other. Open pits usually have only seasonal melanterite occurence, sometimes limited only to short periods between rain falls.

Much less common is melanterite produced by volcanic fumaroles. There it forms layers of tiny crystals or crusts near the volcanic vents.

Melanterite is not mined in its natural form, because it forms highly unpredictable and irregular accumulations. It is also highly unstable and water soluble, thus very problematic to handle and store. Melanterite for industrial use is synthetic, it is produced in vast amounts as a byproduct of the steel finishing or ilmenite processing into commercial grade titanium dioxide. 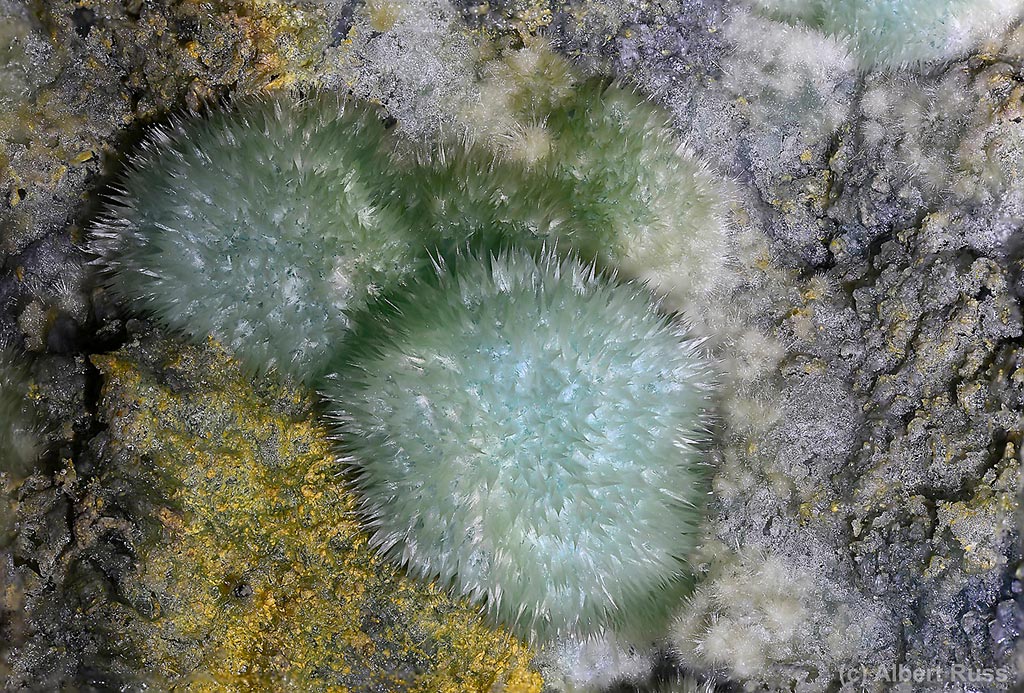 In history, melanterite was used to produce inks and as an coloring agent. Divalent iron in melanterite is easily oxidized or complexed into very insoluble and long-lasting pigments. This feature is still used in some maple-wood coloring processes.

In modern times, serious amounts are used as a supply of iron in agriculture and treatment to highly alkaline soils. It also kills funghi and moss, while being much less toxic then its cousin chalcanthite (CuSO4.5 H2O). Iron(II) sulfate is used in water purification to remove phosphates and chlorethylenes. It is also used in gold refinement to precipitate pure gold from aqua regia solution. Some food supplements also contain iron(II) sulfate.

Generally, melanterite occurs in oxidation zones of iron sulfide deposits. Its formation is often temporary and depends on the humidity and acidity of the environment. It is more common in the abandoned underground mines, but it can form also in the open pits if there is enough humidity. 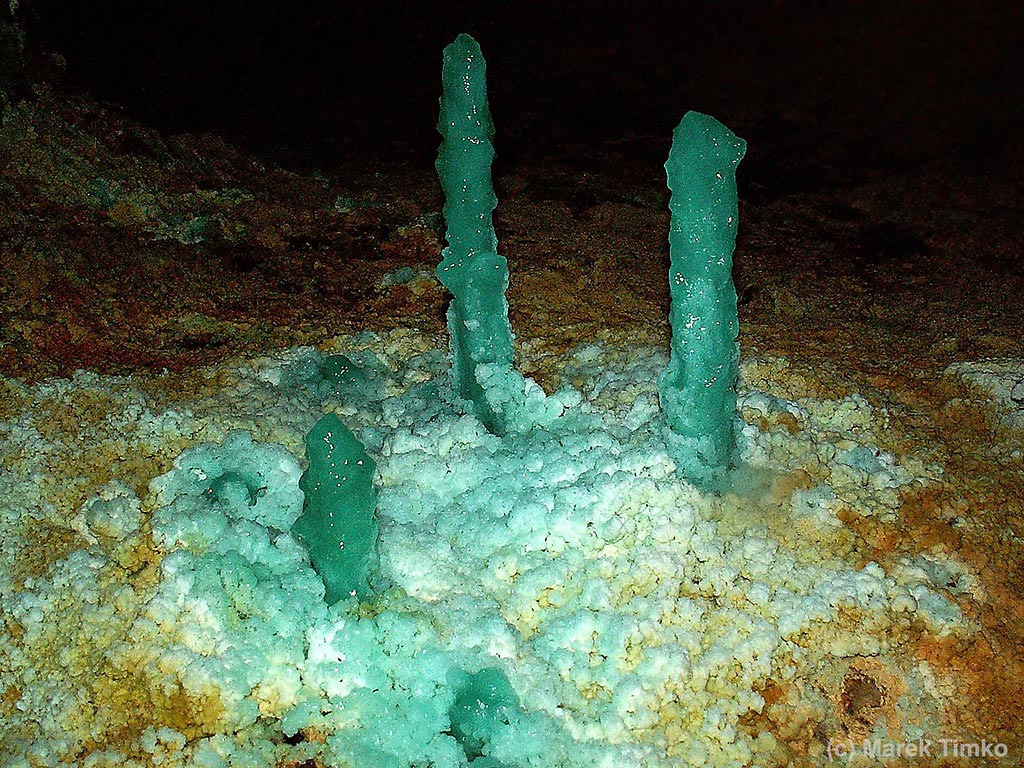 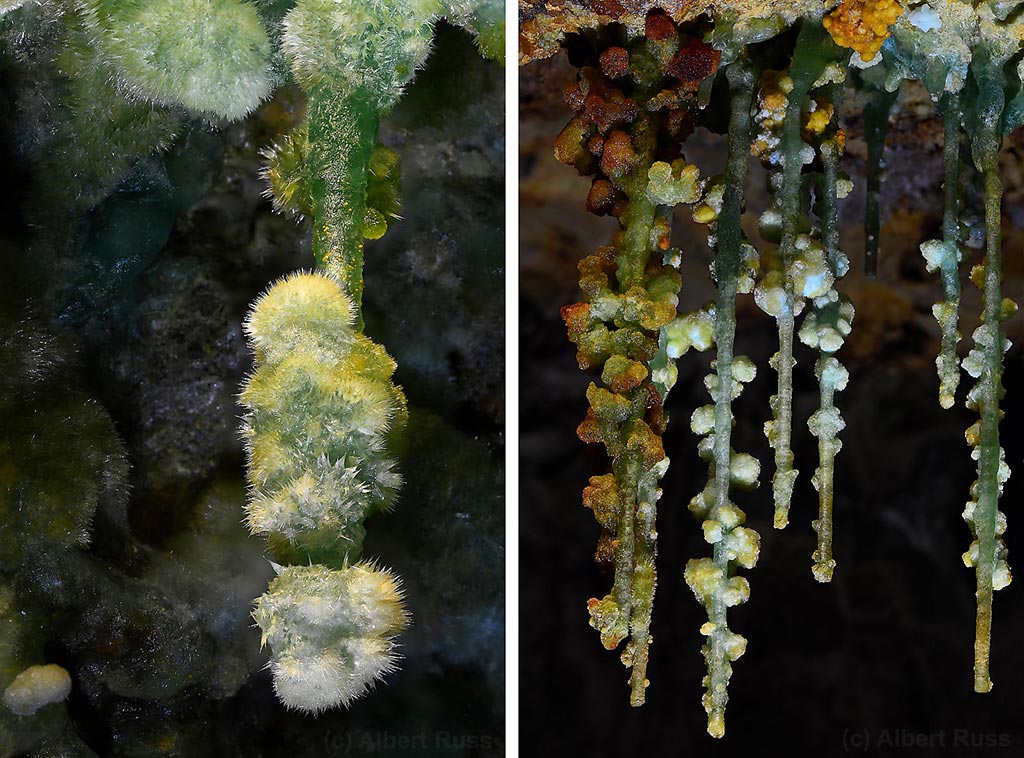 Melanterite stalactites and tiny crystal sprays in the underground mine in Hodruša, Slovakia. Both photos: Albert Russ

US sites include Alma mine and Island Mountain Mine in California; Ducktown in Tennessee; Butte in Montana; and Bingham in Utah.

Volcanic fumaroles with melanterite are far less common and can be represented by volcanoes on Kamchatka peninsula in Russia.