Titanite is a common titanium silicate, which can form outstanding and gemmy crystals. It is an attractive gemstone and collector material with vibrant green and yellow crystal forms. However, its low hardness and intrinsic fragility makes it unsuitable for commercial jewelry use, keeping it from becoming a mainstream product.

Titanite is a calcium titanium silicate [CaTi(SiO4)O]. It belongs to the monoclinic crystal system, and is further identified as a nesosilicate, a mineral composed of SiO4 terahedra linked by interstitial cations. 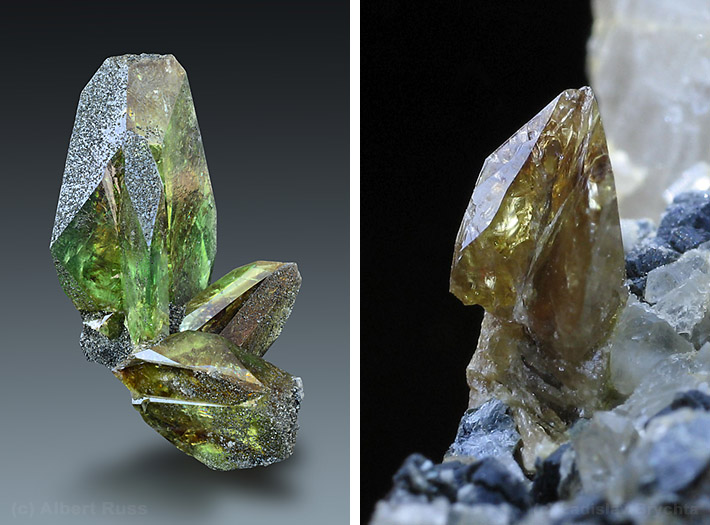 Trace amounts of iron, aluminum, chromium, fluorine, magnesium, manganese, sodium and zirconium can occupy cation positions, replacing Ca and Ti, as well as lesser amounts of selected rare earths (cerium, niobium, tantalum and yttrium). Thorium may also substitute for calcium, and its alpha radiation may destroy the crystal lattice, round the crystal edges and render the mineral amorphous (metamict). 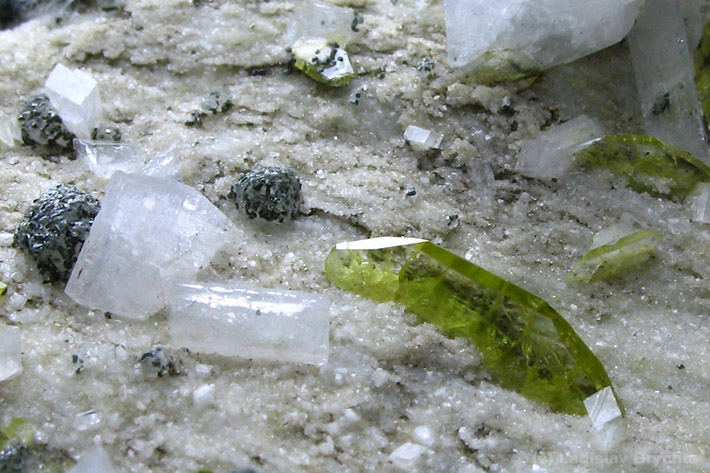 Titanite ranges from yellow to green to gray, reddish brown, brown or black. It is rarely pink, orange or red. It is strongly trichroic from colorless to yellow-green to yellow-orange in its X, Y and Z planes, respectively. It is transparent to translucent in thin pieces, displaying a dispersion of light rays more extreme than diamond. 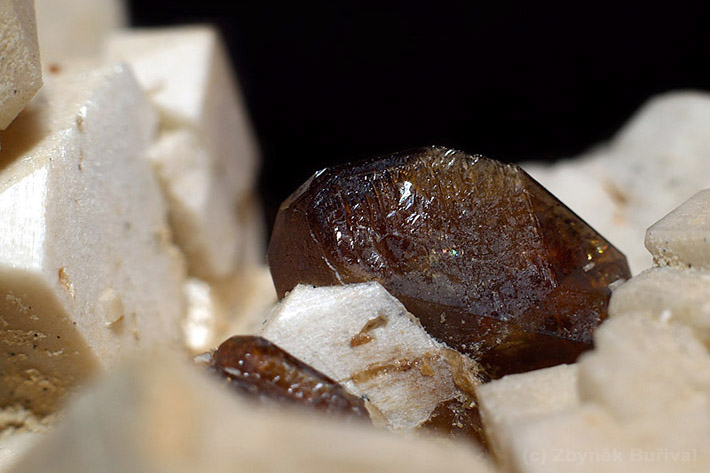 Greenish-yellow varieties of titanite are best described as chartreuse. Iron content is a major control of its hue, with increasing Fe shifting the color from green or yellow to brown or black. Zoning is typical. Its high dispersive power and clarity create a colorful fire when light is passed through it. The best crystals are often recovered from marble.

Cleavage is distinct on {110}, with a parting on {221}. Its luster is subadamantine, tending to slightly resinous or greasy. Fracture is conchoidal to subconchoidal. Its hardness is 5.0-5.5, its streak is reddish-white, and its density is 3.48-3.60.

Historically, the mineral was more commonly referred to as sphene until 1982, when a naming commission of the International Mineralogical Association adopted the name titanite and discredited the name sphene. 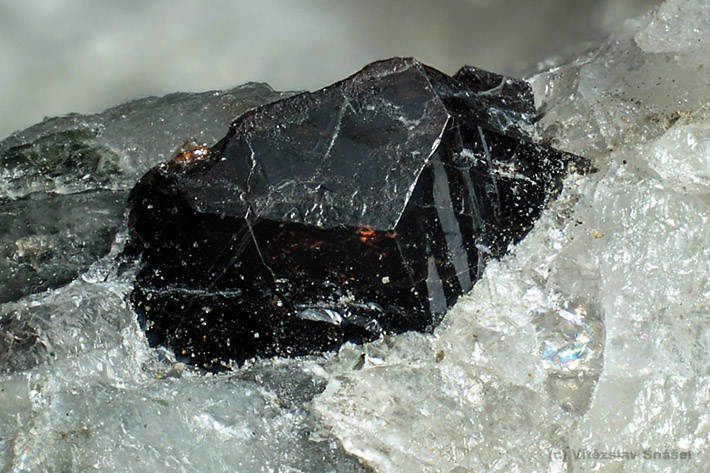 In current peer-reviewed papers, authors may initially identify both terms in the text, or may only to refer to sphene in the body of the paper. Currently, the term sphene refers mostly to the bright green titanites from Alpine clefts, also known as Alpine fissures or Alpine veins. Other synonyms recorded are aspidelite, castellite, ligurite, menakerz and sphen.

Marc Auguste Pictet, a scientific journalist and natural philosopher, first recognized the mineral as a nouveau substance minerale in 1787 but had no context for naming it. Martin Klaproth, a German chemist who discovered uranium and zirconium (1789) and cerium (1803), named titanite in 1795 for its titanium content. Rene Just Haüy, a French mineralogist sometimes considered the Father of Modern Crystallography, introduced the common synonym sphene in 1801, based on the Greek sphenos (wedge) reflecting the characteristic wedge shape of the mineral. 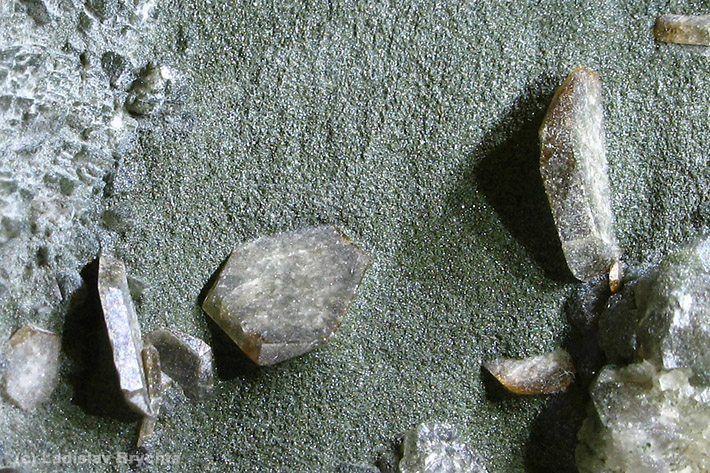 Titanite occurs as an accessory mineral in nearly every type of igneous rock, ranging through all the felsic and mafic varieties, and in any gneissic metamorphic rock largely originating as an igneous rock. Quite typical are envelope-shaped accessory titanite crystals in granites, granodiorites, tonalites and syenites. Titanite is also present in some types of pegmatites. Many gneisses contain microscopic titanite as an accessory mineral; more developed and often visible titanite crystals are present in many amphibolites and marbles. Some Ca/Ti- rich skarns also contain significant amounts of titanite. 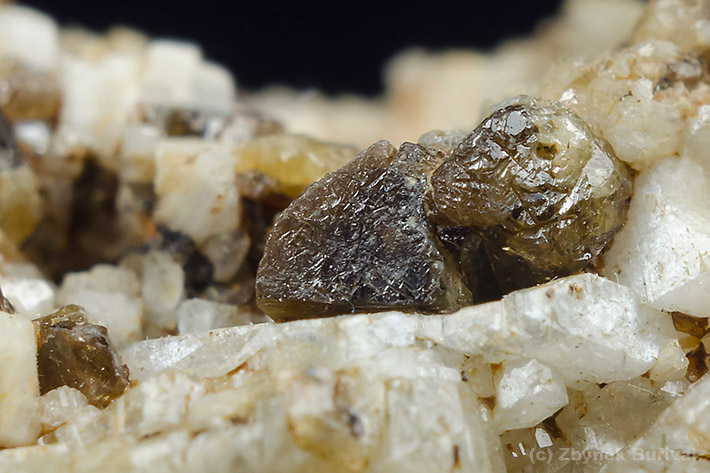 Titanite is less likely to occur in placer accumulations, or in metamorphic rocks derived from sediments, because, unlike other titanium minerals, titanite does not usually survive stream transport: it is easily abraded due to its cleavage and low hardness. Titanites in igneous rocks are usually in various hues of brown and yellow.

Jewelry use of titanite is limited, both because gem-quality specimens are rare and because the mineral is too soft and fragile to use as a ring stone. The lack of cut stones in commercial quantities keeps sphene from becoming a mainstream jewelry product. The gem, jewelry and lapidary industries continue to rely on the term sphene, as a name change would prove disruptive from a marketing standpoint. 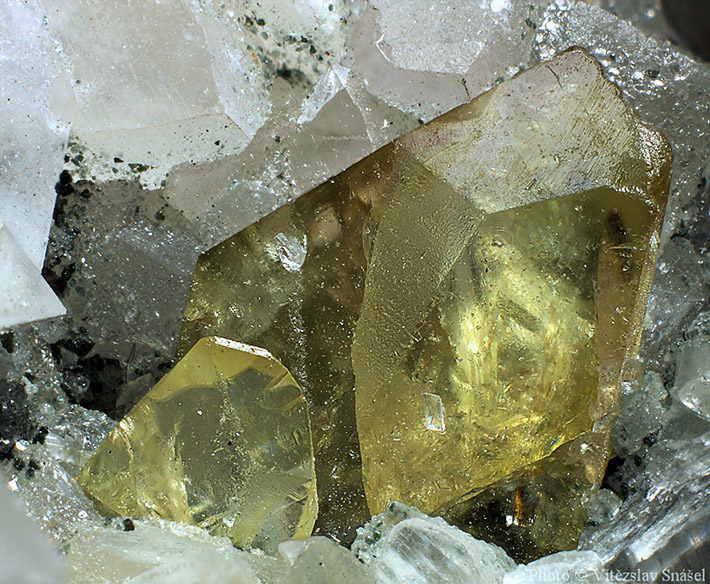 Titanite can also be used as a U-Pb geochronometer, especially in metamorphic terranes where thorium is replacing calcium as a principal cation. When 232 Th - the parent isotope - is incorporated in a new exemplar of titanite, it will decay to 208 Pb - the daughter isotope - at a known rate; the measured ratio establishes an approximate age of mineral formation.

Industrially, titanite is a source of titanium dioxide (TiO2) used in pigments. However, rutile and ilmenite are much more widely used, because their recovery and processing is easier.

Two primary type localities for titanite are cited. In Germany, the Hauzenberg area of Bavaria is the original discovery location, and hosts a Variscan (Carboniferous) granite that intruded metamorphic rocks along the southwestern margin of the Bohemian Massif. U-Pb ages calculated from zircons and titanites yield an emplacement age of 320 +/- 3 MA. 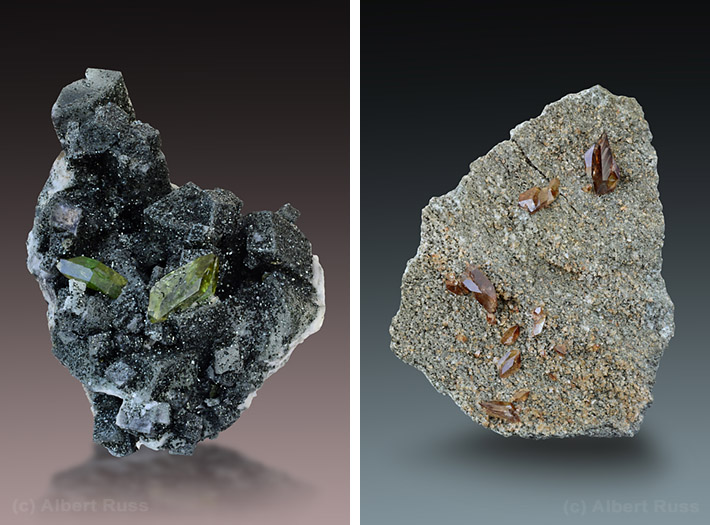 Austria is known for green prismatic specimens in the Felben and Habach Valleys, Hohe Tauern and in the Zillertal Alps. Switzerland hosts massive clusters of colorless titanite in the Oberalp Pass area, Tujetsch, Vorderrhein Valley. Pale brown titanites are known from the Mont Blanc Massif in France. There are hundreds of titanite localities spread over the Alps in Austria, Italy, Switzerland and France. 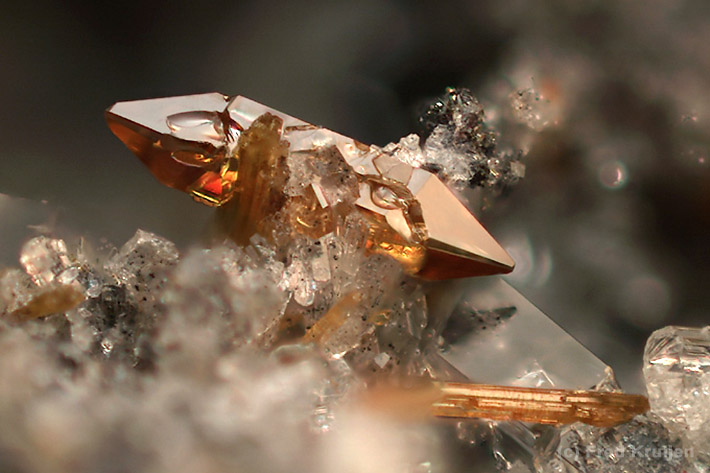 Perfect green titanites of the Alpine-type clefts type occur in Capelinhe, Minas Gerais, Brazil, Dodo Mine in Russia and in the Shigar and Tormiq Valleys in Pakistan.