Rutile is a mineral of many forms and colors. It is quite widespread accessory mineral in many rocks but nice crystals are much less common. Rutile is also important source of titanium and has various industrial applications.

Chemists succeeded in creating synthetic rutile in 1948, to no real effect. The artificial product has an adamantine luster, is transparent and nearly colorless, looks diamond-like, and was marketed as a diamond substitute under the name Titania (an old historic name), but is actually unsatisfactory for jewelry use because it is too easily scratched.

Rutile is a member of the tetragonal crystal system, it is a simple titanium dioxide TiO2. Rutile is ordinarily prismatic, with distinct cleavage. Prisms may be striated vertically or furrowed. Prisms are rarely pyramidal. In igneous rocks, rutile can be granular or massive. Rutile is brittle, and tends to fracture along flat surfaces.

Rutile is one of the TiO2 polymorphs, others include: anatase (tetragonal), brookite (orthorhombic) and akaogiite (monoclinic).

Rutile has the lowest free energy among the polymorphs, such that the transition from one of the other polymorphs to rutile is not reversible. Furthermore, rutile has the highest molecular density among the four, so that in the deep mantle, high-pressure environment where titanium occurs, rutile is the primary mineral expression of it. The needle-like yellow variety of rutile is called sagenite, it is usually incorporated in other minerals. Sagenite is often present inside the crystals of clear or smoky quartz, such specimens are known as rutilated quartz.

Rutile can accomodate significant amount of other elements, especially Fe, Nb and Ta. Iron rich variety is black and sometimes known as nigrine. Nb-rich rutile is also known as niobian rutile or ilmenorutile, Ta-rich rutile is known as strüverite.

The color of rutile is characteristically silver (metallic), black, dark gray, blood red to reddish, brownish red, yellow; even bluish or violet. Along with the color changes, there are subtle changes in luster, ranging from mirror-like metallic to sub-metallic. Opaque metallic specimens can display reddish translucency on their edges. 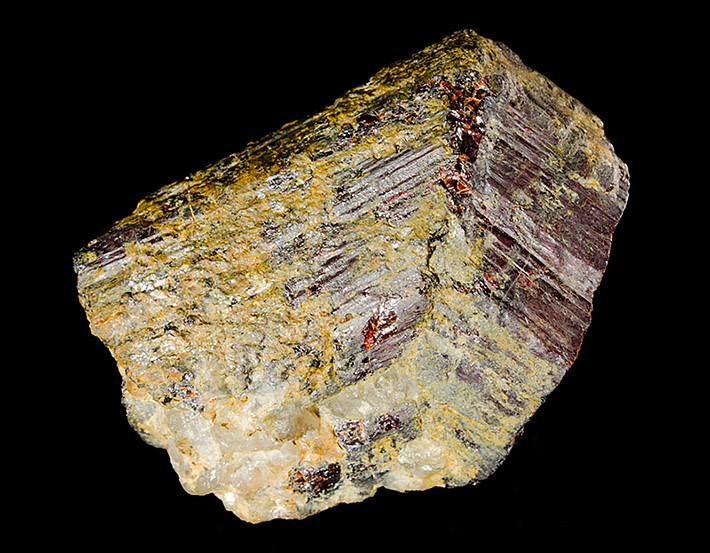 The name rutile comes from the Latin rutilus (reddish), a reference to the characteristically deep red color.

By itself, rutile has one of the highest refractive indices among common minerals, meaning that the speed of light in air is very much higher than the speed of light in a rutile crystal. When a specimen is rotated on a microscope stage in transmitted plane-polarized light, the differences in color are extreme.

Asterism is the production of shimmering or chatoyancy caused by the tiny needles of rutile within the matrix of another mineral. Clusters of tiny rutile needles, whether aligned in parallel or randomly dispersed, can create a shimmering optical effect, which materially raises the appraised value of gemstones. When present in a gemstone, such as sapphire or ruby, the asteriated mineral is called star, as in star sapphire or star ruby, and commands a higher price in the marketplace. Not all forms of asterisms are caused by the rutile inclusions though.

Rutile occurs in two principal environments. In the high-pressure environment of the deep mantle, the mineral is expressed as a primary titanium mineral in eclogites, rocks generally consisting of mixtures of clinopyroxene and garnet, +/- orthopyroxene, olivine, and chromium mica (fuchsite). If those rocks gradually rise in the crust through tectonic activity, they may become partially hydrated and erupted as mafic igneous and volcanic rocks, also still containing rutile. In these environments, rutile is an accessory mineral. 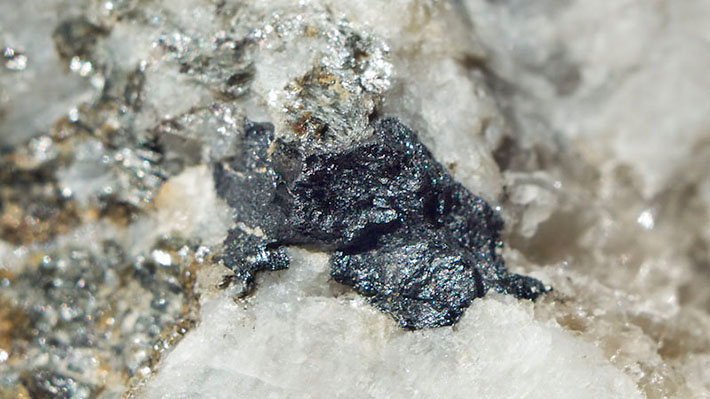 The other modality of occurrence is when these eclogites and mafic rocks are eroded at the surface, particularly in the Pacific Ring of Fire, where converging continental and oceanic plates are uplifting continental masses exposing mafic rocks. The eroded minerals selectively accumulate as beach sands along shorelines, where wave action continually sorts and reconcentrates them to the point of economic viability. In these environments, rutile is a detrital mineral.

In some igneous rocks, weathering of the matrix will promote the destruction of ilmenite, which alters irreversibly to leucoxene, a granular aggregate of rutile or anatase. Classically, leucoxene is described as ranging in color from yellow to brown, but it also occurs in altered basalts as extensive white patches resembling guano.

Even some felsic magmatic rocks - like some granites or pegmatites - could contain rutile. 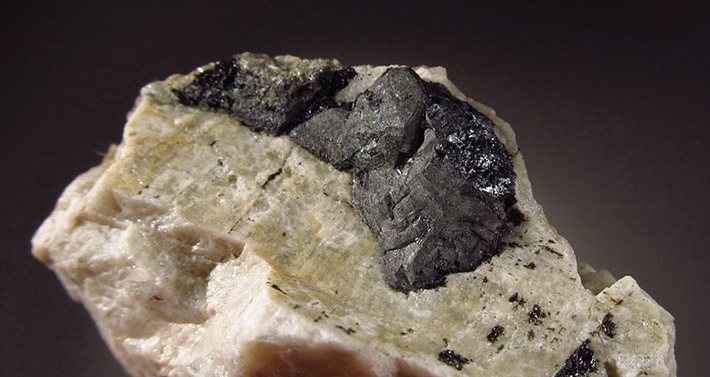 Rutile is also present in some metamorphic rocks, especially gneisses, schists and amphibolites. Some of these rocks contain quartz lenses with rutile crystals, sometimes weighting up to several kilograms. Rutile can be also dispersed within the rock in the form of tiny crystals.

High quality crystals of gemmy red rutile or yellow sagenite come from Alpine type veins. Rutile can be present in the form of regular growths of yellow or brown-yellow needles of sagenite. Gemmy red rutiles grow inside the pockets and sometimes form epitactic growths with Alpine hematite variety - iron rose.

There are no important historical uses for rutile. In the modern world, the titanium extracted from rutile is used to create refractory ceramics and to harden steel. Powdered rutile (titanium white) is the world's principal source of white pigment used in paints, and any other application requiring a bright white finish. Rutile and ilmenite are also main titanium ores.

Rutile as a mineral specimen can be powdered to create a brilliant white pigment applied to many plastic, paper and food products where bright whiteness is a prerequisite. Its use as a paint pigment is the largest dedicated use of titanium dioxide worldwide. 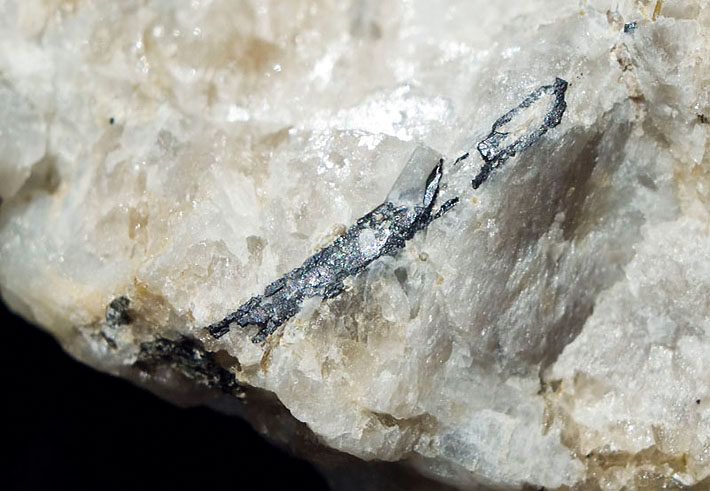 In addition, scientists discovered that when rutile is reduced to nanoscale size, the particles are transparent to visible light but absorb UV light. This property allows incorporating rutile nanoparticles into sunscreen lotions to protect against UV-induced skin damage. At the other end of the electromagnetic spectrum, scientists have used the birefringence properties of rutile to explore longer visible and infrared wavelengths in studies of light polarization.

The industrial center of rutile production in the 1990s was Sierra Leone, in West Africa, where the existing reserve of hundreds of millions of tons of detrital rutile trapped in gravels made it the leading producer for the foreseeable future, but civil war and rapid exhaustion of deposits drastically impacted its standing. 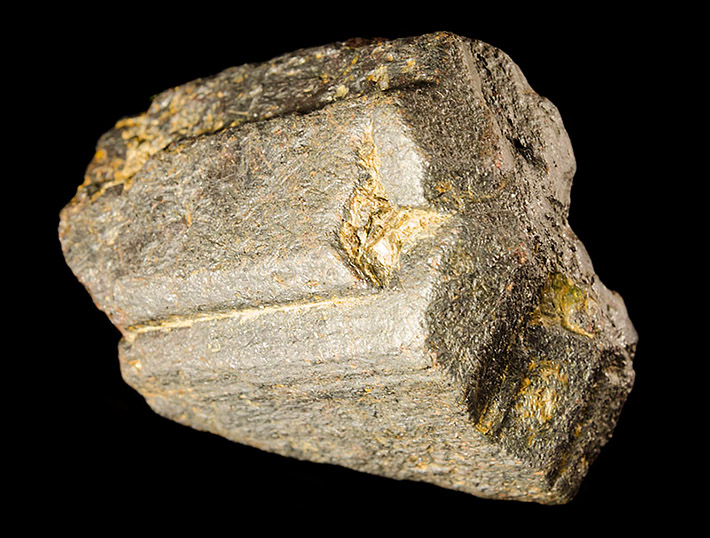 Collection-worthy specimens are not very common. The classic localities are often places where the country rocks are metamorphosed peraluminous schists containing the assemblage andalusite-sillimanite-kyanite. This suite is critically important because it is a definitive indicator of metamorphism in the pressure-temperature conditions of the (hornblende-stable) amphibolite-facies (Hornblende is the diagnostic mafic mineral indicator of amphibolite-facies P-T conditions). 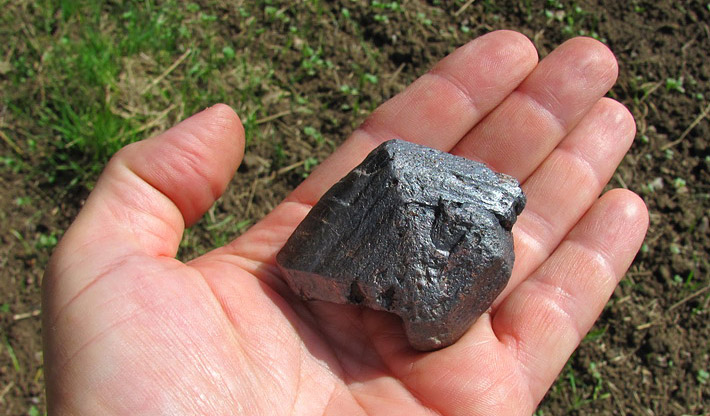 Although some mineral inventory sites list over 3400 localities for specimen-quality rutile, only few localities are well known. 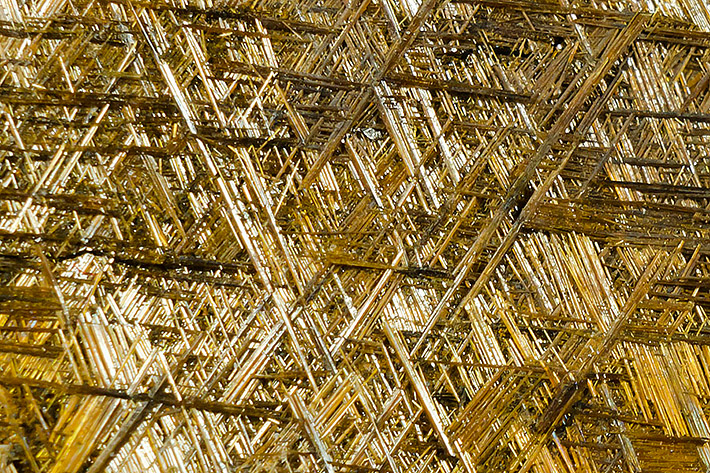 An area which ought to be a viable prospecting ground is the Acadian Mountain terrain in New Hampshire and Maine in the US, where a great deal of the triple-point research was conducted. Rocks in that area are rife with triple-point assemblages, and there are any number of papers in the petrologic literature documenting specific sites of study. 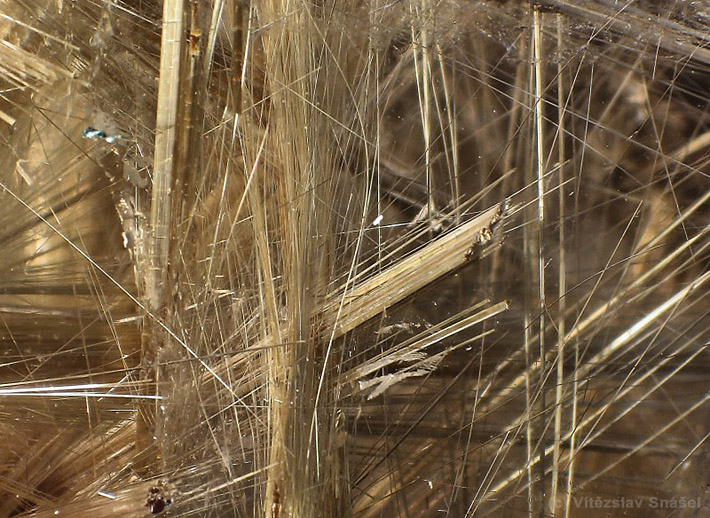