Anatase is rare and highly aesthetic form of titanium oxide, which occurs almost exclusively in Alpine environment. It's great combinations with adularia and quartz are very popular among collectors. But it also has some unique physical properties, which are used in hi-tech applications.

Anatase is one of three most common mineral forms of titanium dioxide (TiO2), the other two being brookite and rutile. Anatase and rutile are similarly abundant, but easily distinguishable on the basis of habit (anatase displays steeper pyramidal faces), hardness, density and luster (anatase is softer, lighter and more metallic). Although anatase has been chiefly used as one of several white pigments, its unusual reactivity to UV light and water are leading to newly-imagined applications. 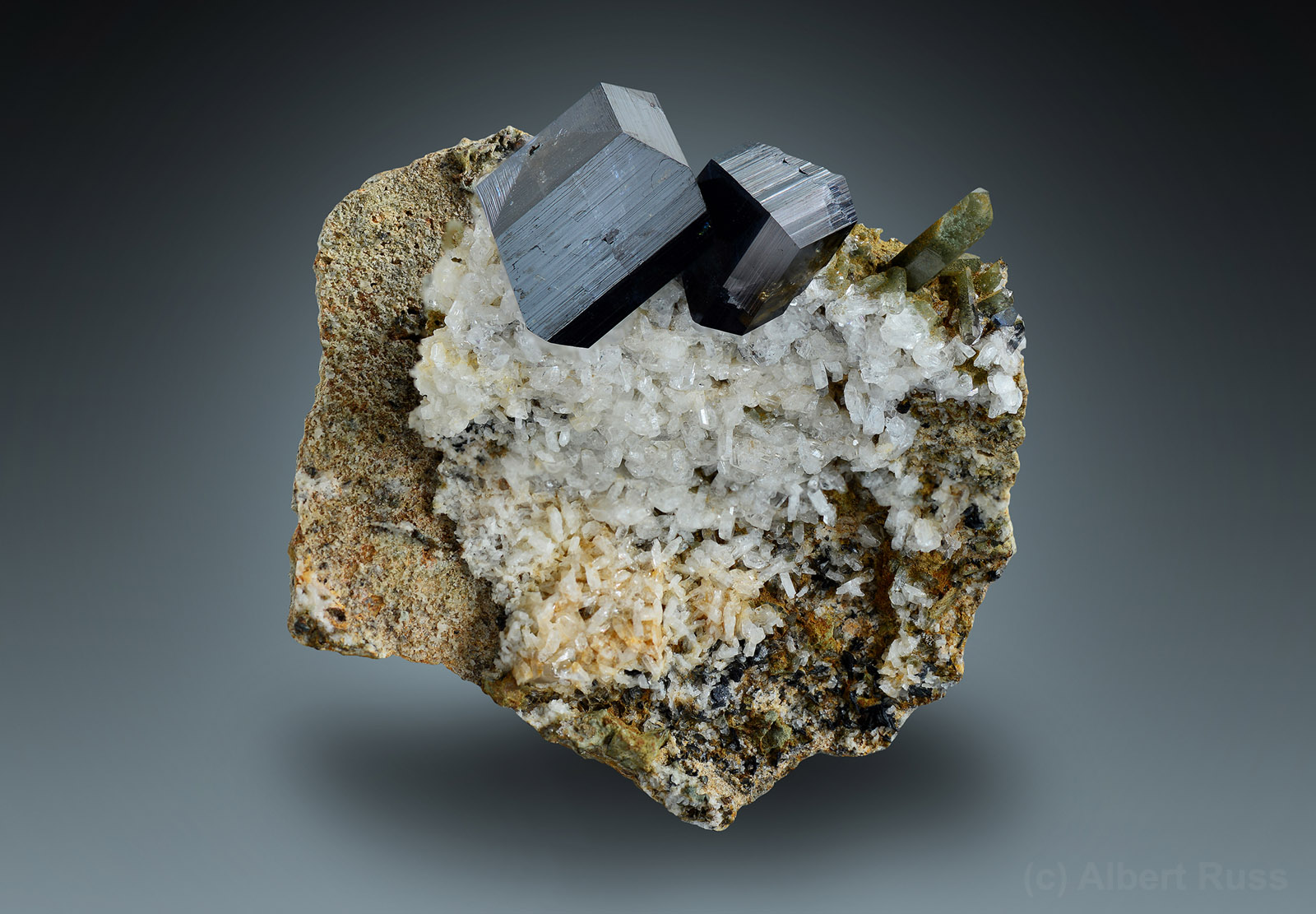 Anatase crystallizes in the tetragonal crystal system. It typically forms dipyramidal or tabular crystals, with two growth habits. The most common form is acute-angle double pyramid, some of these being extremely elongated. The less common shape include flattened pyramid, or prismatic shapes. Oblique striations are often present, and sometimes the crystals show unusual accordion-like growths. 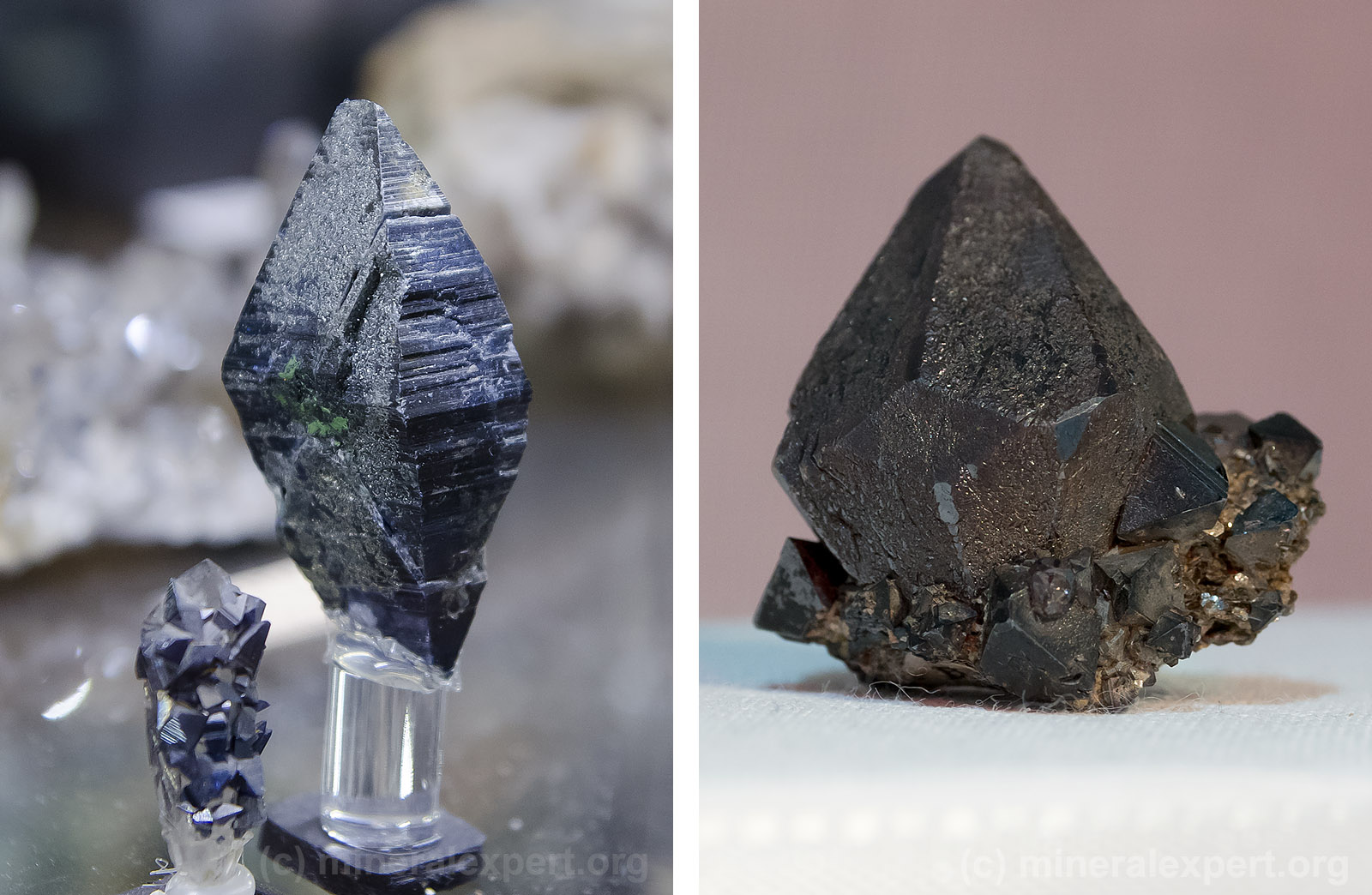 Anatase is commonly black, but may occur as reddish to yellowish brown, dark blue, colorless or even white. Red, green and gray are rare. Occasionally, anatase will display splotchy lighter and darker patches. It is transparent when light-colored, but may appear opaque in dark specimens due to internal reflection. It displays weak pleochroism on 3 axes, but more strongly in deeply-colored specimens.

Octahedrite is an earlier term for anatase, owing to the common octahedral-like habit of the crystal - in fact it is tetragonal dipyramid. Oisanite and dauphinite are obsolete place-names of principal occurrences in France. Wiserine is a name formerly uniquely applied to the honey-yellow-habit variety described above. 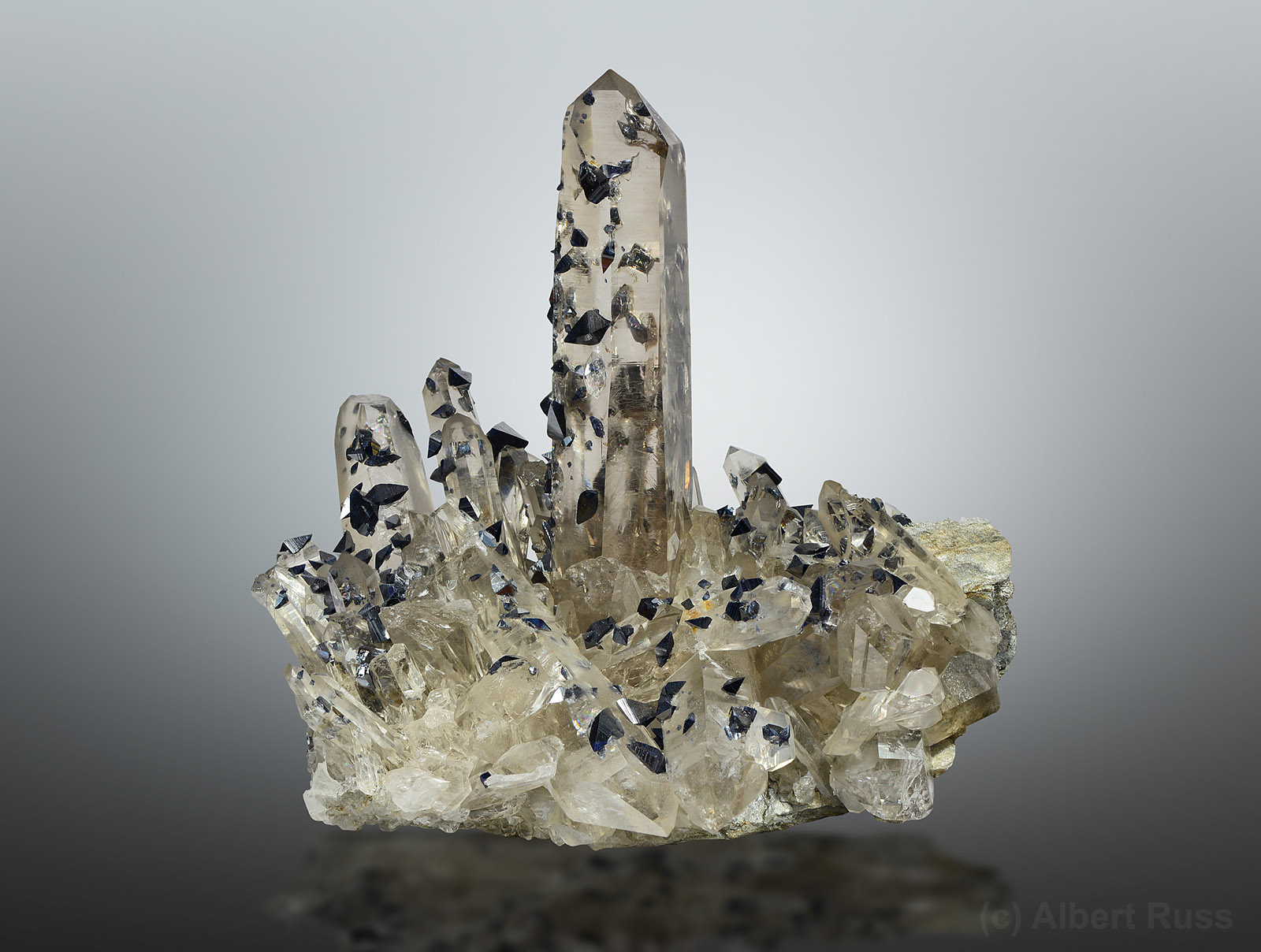 Anatase itself is stable at room temperature, where it can form pseudomorphs after rutile. At high temperatures (between 550 and 1000 oC), anatase will recrystallize as rutile. 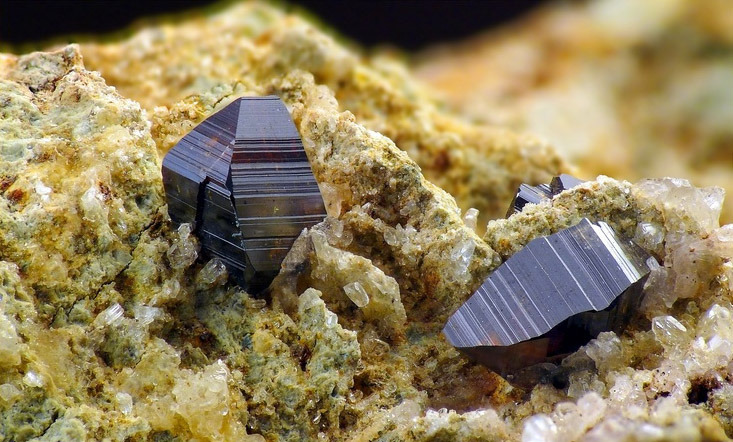 René Just Haüy, a French priest ordained in 1770, became fascinated with mineralogy shortly after his investiture. Haüy became a pioneer in the new field of crystallography after noting the perfectly smooth planes of fractured mineral specimens. His experiments with repeatedly cutting and breaking mineral samples led him to conclude that every crystal possessed a primitive nucleus or, as he termed it, an integrant molecule which could not be subdivided without destroying the fundamental identity of the crystal. He also recognized the power of the orderly arrangements of successive layers in creating crystal geometry. He published numerous reports on his investigations of mineral structures between 1784 and 1822. In these, he explored the idea of primitive crystal forms, and developed a mathematical theory to explain the appearance of crystals. His work on crude samples in the early 19th century ultimately laid the foundation for the 1902 X-ray discovery of microscopic crystal lattices.

Along the way, he named anatase in 1801 on the basis of the Greek anatasis (extension), referring to the vertical axis of anatase being longer than that of the similar rutile. 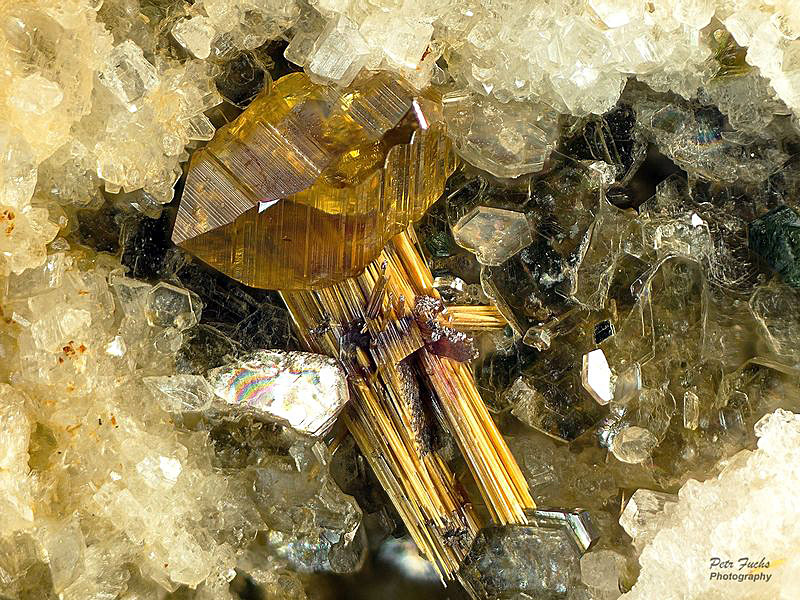 Anatase is most commonly found in both hard rock environments, forming crystals in crevices of various schists, phyllites and gneisses, and smaller aggregates disseminated as a common detrital mineral in sediments. Low-temperature quartz veins in Alpine environments in central Europe are the best-known examples. 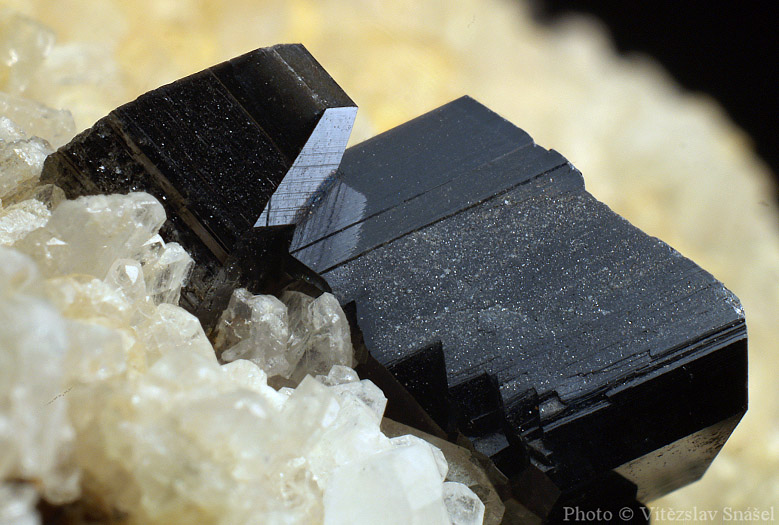 Alpine vein anatase is typical for rocks with elevated Ti content - like phyllites, mica-schists, and gneisses. It is often associated with quartz, adularia, or less often with titanite or rutile.

Much less often, anatase can be present as a late hydrothermal phase in some granites or pegmatites. It can also occur in some carbonatite deposits.

Anatase, along with rutile, is the most commonly used form of TiO2 to create white pigments for use in paints, plastics, paper, ink, medicine, toothpaste, and even as a brightener in skim milk. Annual consumption in this form is about 4 million tons. However, industrial anatase is created in chemical facilities - titanium is recovered from ilmenite and rutile. Natural anatase is too rare and does not form deposits.

However, anatase has peculiar characteristics that affect the types of niche applications available, all dependent on its surface properties. It turns out that the surfaces of anatase particles hydrolyze, that is, they generate hydroxyl radicals (OH--) which are potentially carcinogenic or toxic to organic molecules. This leads to 4 different outcomes:

Manufacturers of sunscreen can take advantage of the whitening and UV-blocking capabilities of anatase to make the product, provided they first coat the particles with silica or alumina to prevent the particles from coming into contact with wet skin or water. 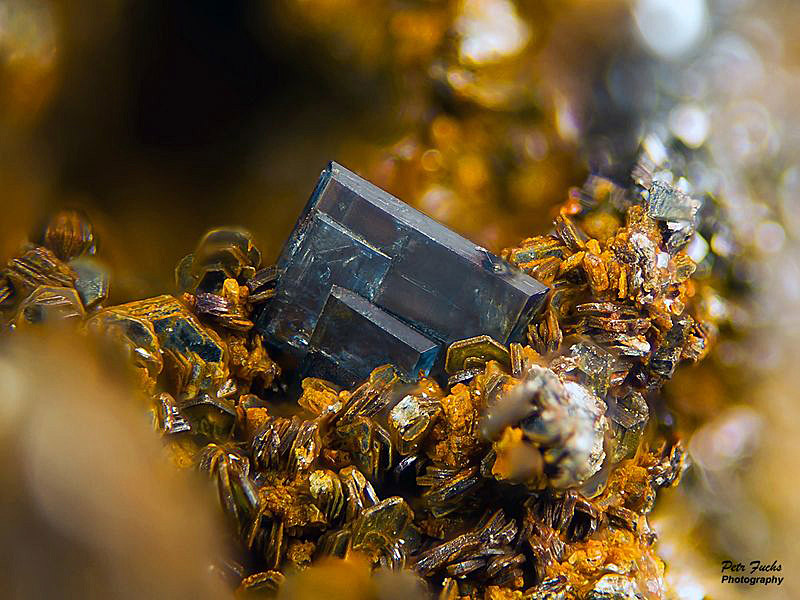 Manufacturers of cement and tiles can take advantage of the hydrolysis effect to create sterilizing and anti-fouling properties in the product; in the presence of water, the hydrolysis radicals will convert organic molecules to CO2 + H2O, and destroy micro-organisms.

Manufacturers of glass can take advantage of the hydrolysis to create a self-cleaning product, first introduced in 2001. Anatase powder is combined with an organic complexing agent to form a soluble mixture which can be spread evenly as a thin layer on a glass surface. Subsequent heating drives off the organic complex. The resulting glass will react to UV light photochemically, create hydroxyl radicals when wetted, and wash the dirt off in a sheet of water.

Manufacturers of solar panels can take advantage of the UV response of anatase to construct multilayer glass plates (called Grätzel cells) to generate currents from the electrons contained in dyes bonded to the anatase. This is a new technology which has yet to scale up for mass production. The principal obstacle to implementation appears to be the uncontrolled freezing or vaporization of the working fluid.

The type locality is St. Christophe, Bourg-d'Oisans, Isère, France. There are numerous Alpine veins at many sites throughout the Swiss, French, Italian and Austrian Alps. In Switzerland, large crystals from Binn, Valais, and at Cavradi, Tavetsch, and Graubunden. In Norway, at Kragerø; fine crystals from Hardangervidda, Ullensvang; Slidre, Valdres; and Gudbrandsdalen. In England, from the Virtuous Lady Mine, Devonshire. In Wales, from Fron Oleu, near Tremadog, Gwynedd. 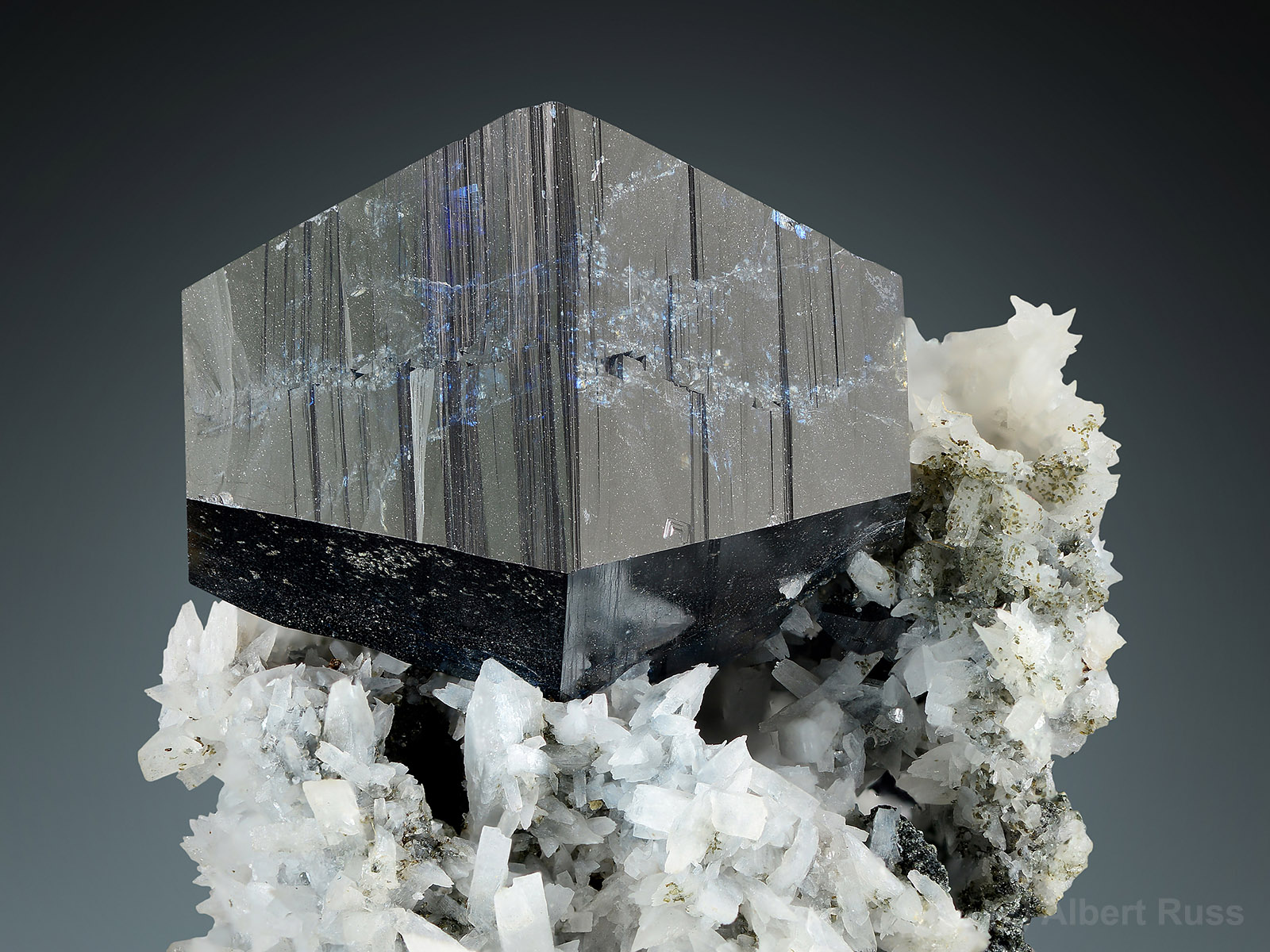 Excellent anatase crystals come from Kharan district, Balochistan, Pakistan. In Russia, from the Lapcha Mine and Dodo Mine in Tyumen Oblast.