Crocoite is a rare lead and chromium secondary mineral. Its rarity, bright red color, and exceptional crystal forms have guaranteed its place as a prized collection mineral. Crocoite is the first historic source of chromium and natural yellow pigment - unfortunately highly toxic.

First discovered and analyzed in 1797, it is extremely toxic, owing to its two principal metals, lead and hexavalent chromium. Crocoite occurs so infrequently that it has never been a primary source of chromium for industrial uses, and its main commercial application today is as a synthesized version of paint pigment known to artists as chrome yellow. 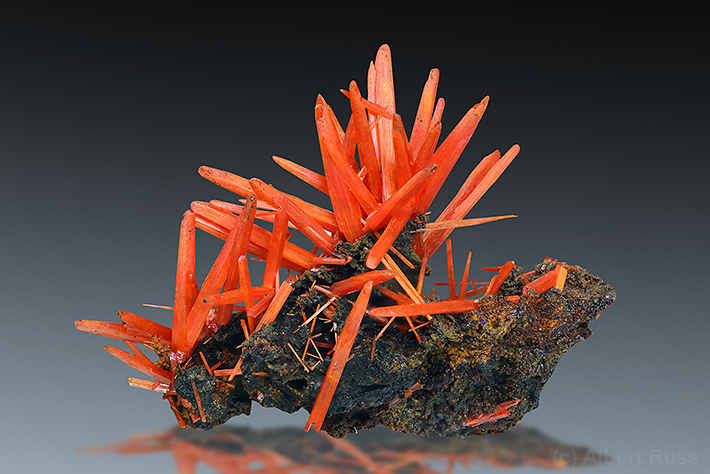 The first recorded discovery of crocoite occurred in the Urals at Ekaterinburg (Siberia) at the Berezovsk Gold Mine in 1766, but not named formally until 1832, when it was first tagged as krokos (Greek for its color, saffron), then crocoisite, then crocoite.

Crocoite is a natural is lead chromate, PbCrO4. It crystallizes in the monoclinic system. Exceptional specimens consist of large, prismatic, vertically striated crystals. More commonly, the mineral occurs as aggregates of many different forms: elongated needles, splintery acicular groups, reticulated aggregates, stubby (and sometimes hollow) crystals, all growing in a dozen different directions. When enclosed in the matrix of ultramafic igneous rocks and gneisses, the habit will most often be granular and unexceptional. The cleavage is distinct in two directions, lengthwise.

The color of crocoite ranges from bright hyacinth red to red-orange to orange to yellow. The mineral is adamantine and vitreous, variable in hardness (2.5-3.0), with an orange to orange-yellow streak and a density between 5.9 and 6.1. By weight, crocoite is 69.06 % PbO and 30.94 % CrO3.

Crocoite, as a chromium-bearing oxidation product of deposits containing galena, may be found in association with other lead-oxidation species, particularly pyromorphite or mimetite. 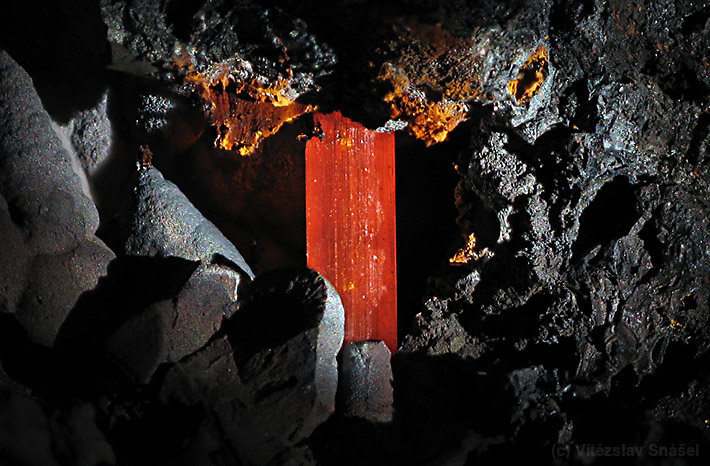 Crocoite loses some of its brilliancy and translucency on exposure to UV light. Specimens are extremely fragile and must be handled with care.

Unfortunately, hexavalent chromium Cr6+ is highly toxic. Both natural chromates - like crocoite - and synthetic pigments are mutagenic, carcinogenic and cause respiratory and reproduction diseases. Touching crocoite specimens is not dangerous, but licking it or inhaling and eating crocoite dust is not a good idea.

The occurrence of crocoite requires exceptional circumstances. Remember that crocoite is a compound of both lead and chromium. It is common for lead deposits to be both widespread and easily oxidized to its more familiar secondary products, lead carbonates, lead chlorides and lead phosphates. It is much less common to find lead deposits in association with chromium, and in fact is pretty rare. That is why most of the world production of chromium is sourced from chromite in chromium-bearing ultramafic rocks, with very little contribution from areas mineralized in galena. 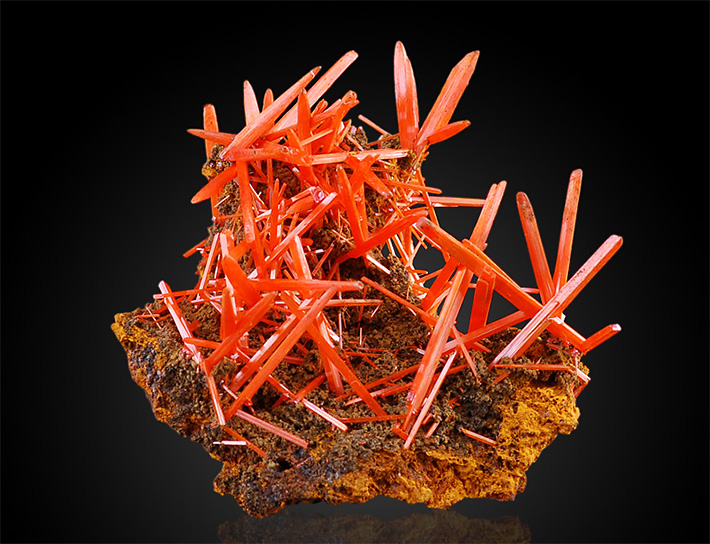 In the simplest terms possible, ultramafic rocks are generated deep in the crust, where chromium, nickel, cobalt, platinum and palladium occur in some abundance, typically far from the shallower crustal levels that produce deposits of lead, zinc, copper, molybdenum or, at even higher levels, gold, silver, arsenic, antimony, selenium and mercury. This is not to say that the Earth is stratified metallogenically, but there is a great deal of empirical evidence to show that the metal associations are real, and grouped geologically according to some organizing principal, namely their source abundance and origin.

Chemical manipulation of crocoite led to the discovery of chromium oxide in 1797. Louis-Nicholas Vauquelin, working from a crocoite specimen from the Berezovsk site in Siberia, first ground the sample to a powder. He mixed the PbCrO4 powder with HCl to precipitate the lead, leaving a residue of chromium oxide (CrO3). He extracted the oxygen from CrO3 by heating it in the presence of carbon, yielding a pure sample of chromium metal.

In the early years after the 1797 discovery of chromium, crocoite was quickly displaced as a source of chromium by the discovery, in 1799, of the mineral chromite, found in far greater quantity in ultramafic rocks. Initially, chromium was used as a stable dye to replace plant and mineral dyes which faded upon laundering. Textile producers discovered that chromium compounds could be used to stabilize dyes for long-term wear. Shortly after, the use of chromium expanded to produce red and green pigments for printing wallpaper. 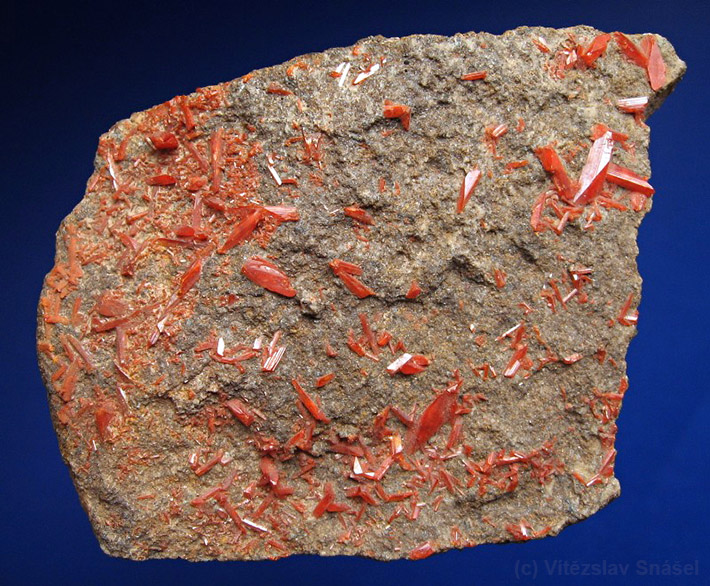 Over the next two centuries, chromium - abundantly sourced from chromite, not crocoite - found wide application in manufacturing and hardening steel, then in creating corrosion-resistant (stainless) steel, which accounts for 60 % of world chromium consumption. Chrome plating is extensively used since 1924.

The one legacy item associated with chromium from the early days of pigment production is the color known formally as chrome yellow. The yellow produced by Andreas Kurtz achieved vogue status when it was used to paint the carriage of Princess Charlotte (1796-1817), daughter of King George IV. The color is still listed in British color catalogs as Kurtz yellow, but it is known better today in the US as Yellow Cab yellow.

By far the single most important collecting area is the Dundas District of Tasmania, Australia, home of the Adelaide, the Extended, the Red Lead, the West Comet and Platt Mines, which are stated to account for 95 % of the world's specimen supply! The geologic setting for the crocoite occurrences appears to be the a fault zone placing Cambrian carbonates against a serpentinite zone. Weathering in the uppermost reaches of the fault zone evidently allowed Cr-rich waters from the serpentinite to mix with Pb-rich waters from the carbonate, and create an oxidized cap rich in crocoite. Tasmania adopted crocoite as its official mineral emblem. 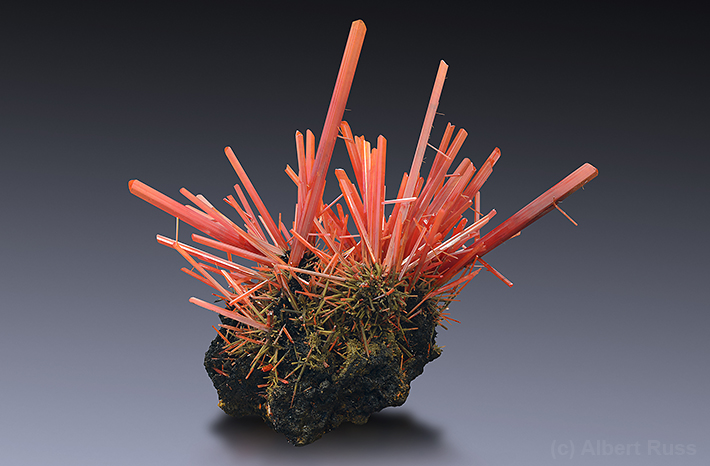 There are precious few other localities mentioned in references, all obviously suppliers of inconsequential or inferior collectible samples: Classic sites include Berezovsk in Russia, Callenberg Mine in Germany and Nontron in France. Less known are Labo in Phillipines and Congonhas de Campo in Brazil. Localities in the USA include Arizona, Mammoth & Tiger Mines in Arizona and El Dorado Mine and Darwin Mine in California.