Pyromorphite is a mineral species composed of lead chlorophosphate, Pb5(PO4)3Cl. It is a member of the apatite group, a group of isomorphous hexagonal minerals. Crystals are common, and have the form of a hexagonal prism terminated by a basal plane, sometimes combined with narrow faces of a hexagonal pyramid. Crystals with a barrel-like curvature are not uncommon. Globular and reniform masses are also found.

Many specimens are intermediates among the three members, and the resemblance among them may be so strong that it is only possible to distinguish among them by chemical tests. 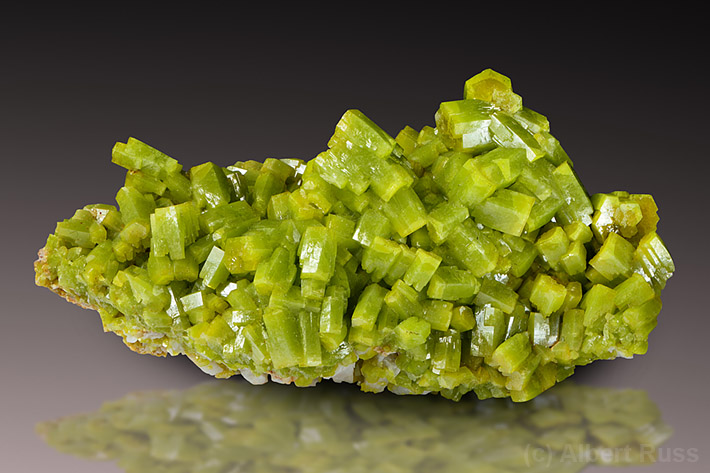 The color of the mineral is usually a shade of bright green yellow or brown, with a resinous luster. Its hardness is 3.5-4.0, its streak is white, and its specific gravity is 6.5-7.1.

Mimetite is usually described as somewhat yellower in color, with fewer hollow crystals. Vanadinite is somewhat redder, slightly softer, and with a slightly yellow streak.

Historically, the members of the pyromorphite-mimetite-vanadinite series were called green lead ore and brown lead ore, until the phosphate variety was successfully identified in 1784 and formally named in 1813. These varieties have gone by a number of other names, including bryoide, muscoide, polychrome, pseudocampylite, and sexangulite. 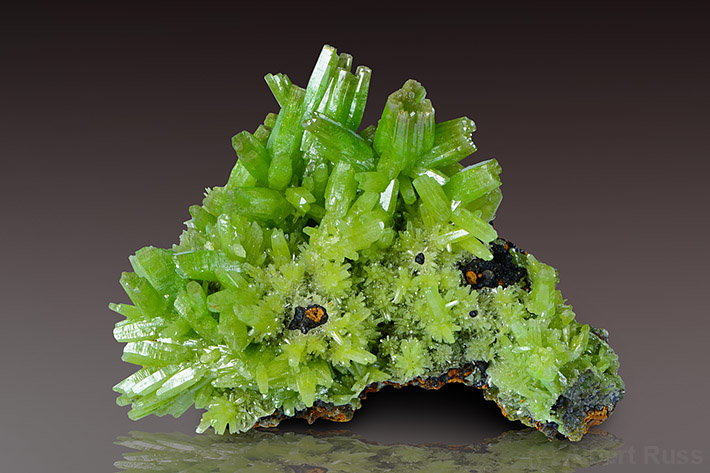 In addition to the As and V substitutions for P described above, the mineral is also known to host substitution of Pb by Ca, resulting in a lighter color and a lower specific gravity, 5.9-6.5. These varieties carry less familiar names (miesite, nussierite and cherokine, based on their place of origin). A globular variety is generally known as polysphaerite.

Pyromorphite is generally considered a secondary lead mineral found in the oxidized zones of conventional lead deposits, typically observed as green, yellowish, brownish, greyish or white barrel-shaped hexagonal prisms, in clusters or as druses on matrix. The lead necessary for pyromorphite formation is mostly sourced from decomposed galena.

However, empirical observations of certain occurrences of pyromorphite in the Cumbria / Lake District area of England led researchers to ask if pyromorphite could be precipitated as a primary phase. They raised the question because pyromorphite, not galena, is the principal mineral of the outer zone of this otherwise conventional lead-zinc system. 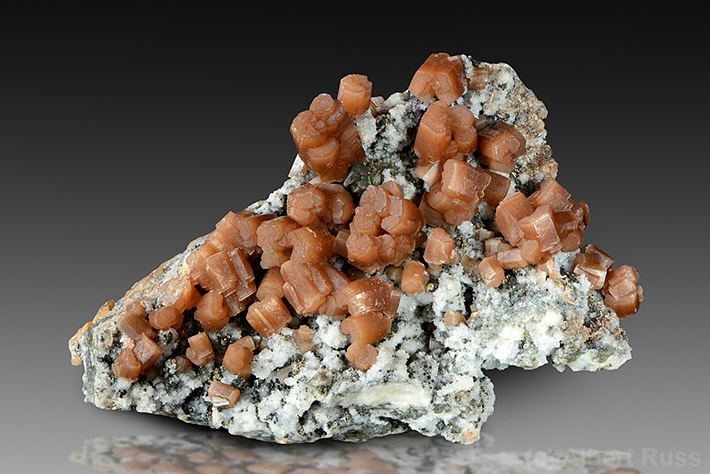 Nice pyromorphite specimens are most valued as a collector items. Using a pyromorphite as a lead ore is less common. Lead is a widely used commodity, with an annual worldwide production in the tens of billions of pounds. About 80 % of the use of lead is in lead-acid batteries, but it is valued in other industrial applications for its density and ability to combine with other elements. Its density makes it ideal for any application requiring high weights, or shielding against sound or radioactivity. 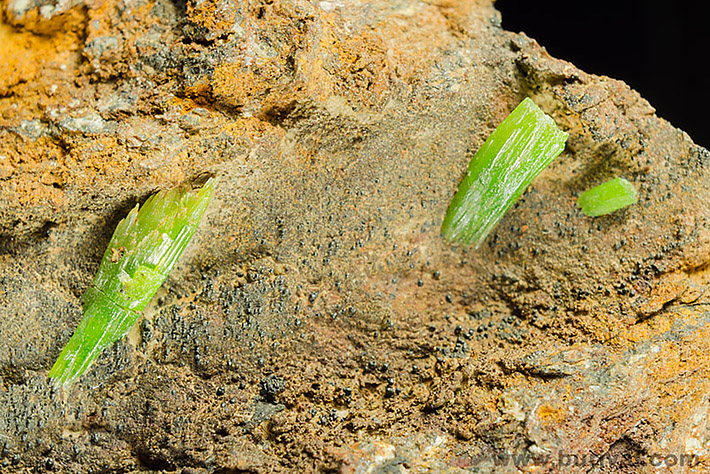 Pyromorphite is a minor ore of lead, where it occurs with more abundant lead minerals. It is also a popular mineral among collectors, especially specimens from classic occurrences, as well as newer finds from China of bright neon green pyromorphite, which command very high prices. A cursory search of Web sites demonstrates the current popularity of Chinese specimens. 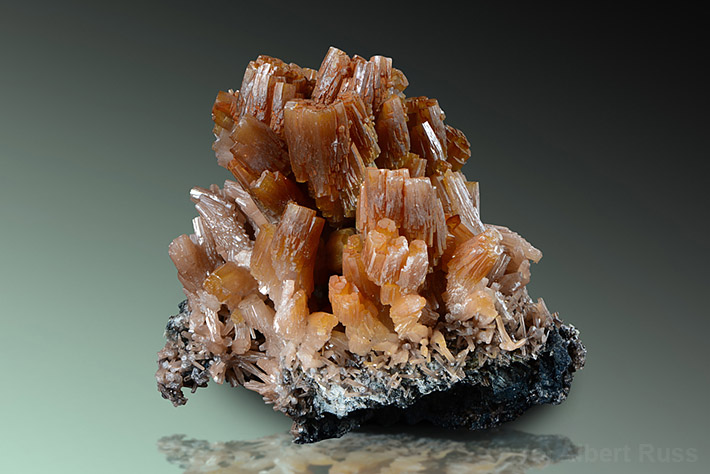 This mineral is known from many classic and exceptional localities, ranging from Europe through China, Australia, Africa to the Americas. The most renowned site is the Bad Ems District, Rhineland, Germany, where large stubby, and often brownish crystals are affectionately called Emser Barrels. 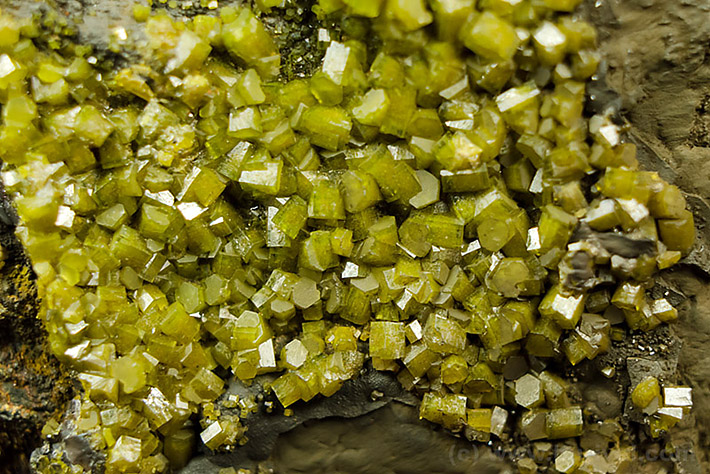 In Asia, China is a relatively new source of spectacular specimens, some exhibiting an unusual brilliant apple-green color that appears too artificial to be real. Notable examples come from the Daoping and adjacent Yangshuo Mine in Gongcheng, Guangxi, China.

Australia is also host to numerous fabulous occurrences, including Broken Hill, New South Wales; the Rum Jungle, Batchelor, Northern Territory; the Black Star Mine, Mount Isa, Queensland and Zeehan, on the island of Tasmania. In Africa, the large plates from the Broken Hill Mine, Kabwe, Zambia deserve special mention. 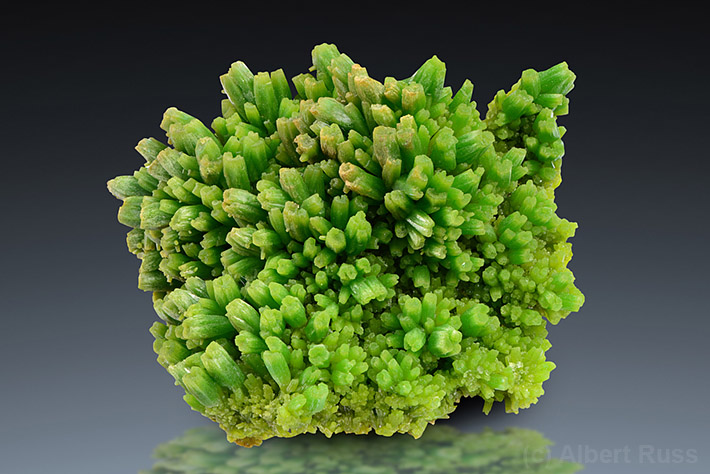 In the Americas, in Mexico, light green crystals associated with wulfenite come from Mapimi, Durango; and nice crystal clusters from the San Luis Mine, San Jose, Chihuahua. In Canada, nice specimens were found in the Society Girl Mine in Moyie, British Columbia. In the U.S., excellent historical specimens are known from the Coeur d'Alene District in Shoshone Co., Idaho, especially at the Bunker Hill Mine in Kellogg, where outstanding green and orange crystals and sparkling globular masses were found. The classic U.S. locality is Phoenixville, Chester Co., Pennsylvania, home of the famed Wheatley Mines; a historic locality, the Loudville Lead Mine, in Easthampton, Hampshire Co., Massachusetts which features microcrystals.