Vanadinite is a popular secondary mineral species of vanadium and lead, occurring as an orange-red hexagonal crystals. Like many other exotic minerals, vanadinite has a complicated history of recognition and identification.

The Spanish mineralogist Andres Manuel del Rio, then a Professor at the School of Mines in Zimapan, Hidalgo, Mexico first discovered the mineral in 1801, and named it brown lead. He speculated about its principal metal, first naming it pancromium, then erythromium, before deciding that it was not actually a new element, but rather a degraded form of chromium.

In 1830, the Swedish chemist Nils Gabriel Sefström discovered the element vanadium, naming it after Vanadis, the Scandinavian goddess of beauty and youth, on account of the mesmerizing colors of the mineral in solution. By 1838, the connection between Del Rio's brown lead and the new element was established, and the brown lead was renamed vanadinite, owing to its high vanadium content. 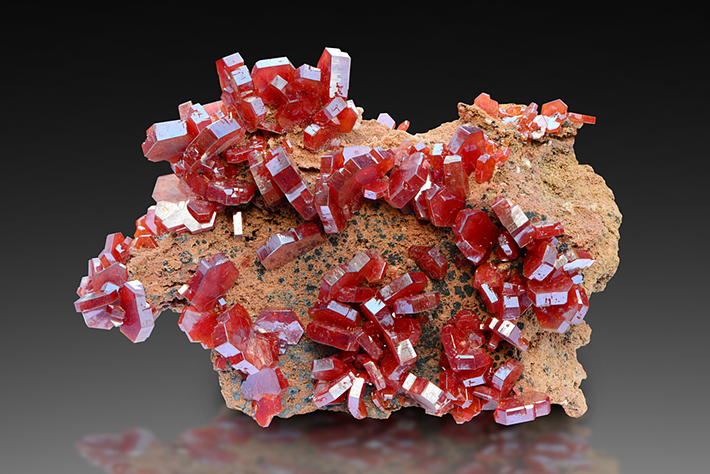 Vanadinite is lead chlorovanadate Pb5(VO4)3Cl. It is a member of the apatite group of chlorophosphates, a group of isomorphous hexagonal minerals. Vanadinite crystals typically appear as short hexagonal prisms reminiscent of tourmaline, and sometimes as hexagonal pyramids. A complete listing of habits would include the terms fibrous, crusty, radiating, acicular, reniform and mammilary. Bent or rounded crusts are also known. 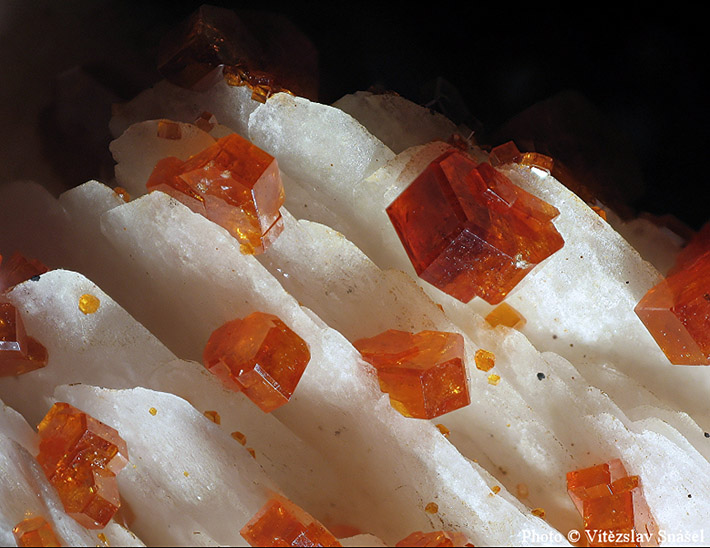 This lead vanadate phosphate forms a complete series with mimetite (lead chloride arsenate, Pb5(AsO4)3Cl ). This series of substitutions is less usual: most solid solution series involve exchanging metal cations; here the substitutions involve the arsenate (AsO4) and phosphate (PO4) anion groups substituting for the vanadate group (VO4). There is actually a formally named intermediate member, endlichite (Pb5([V,As]O4)3Cl) , which is usually described as an arsenic-rich variety of vanadinite. Many of the intermediates bear such a strong resemblance to each other that it only chemical tests permit them to be identified. Generally, endlichite is usually more brown or gray - unlike bright orange or red pure vanadinite. 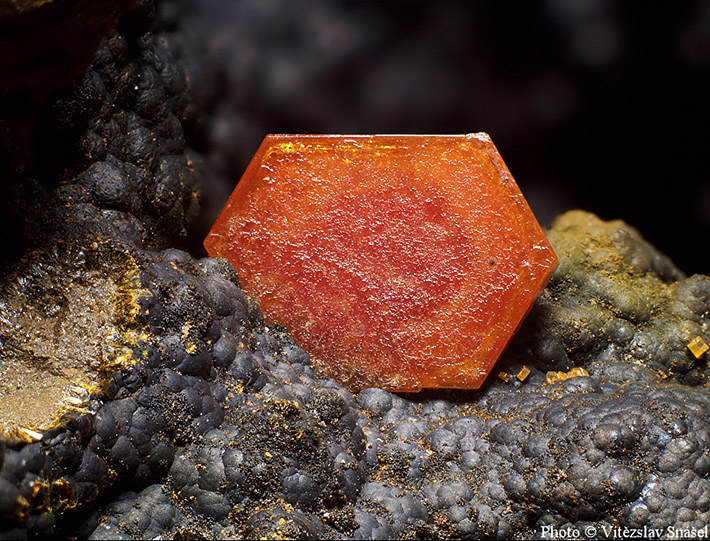 The color of vanadinite is usually bright red or orange red, but variations of red-brown, brown grey or yellow are also recognized. Its vibrant color makes it a popular mineral for collectors, but some specimens are opaque, translucent or transparent. Its luster ranges from greasy to resinous to adamantine. Its hardness lies between 2.5-3.0, the range from a copper penny to fluorite; its streak ranges from pale yellow to brownish yellow, and its specific gravity varies from 6.6 to 7.2, depending on impurities. It is a brittle mineral, and tends to fracture conchoidally. 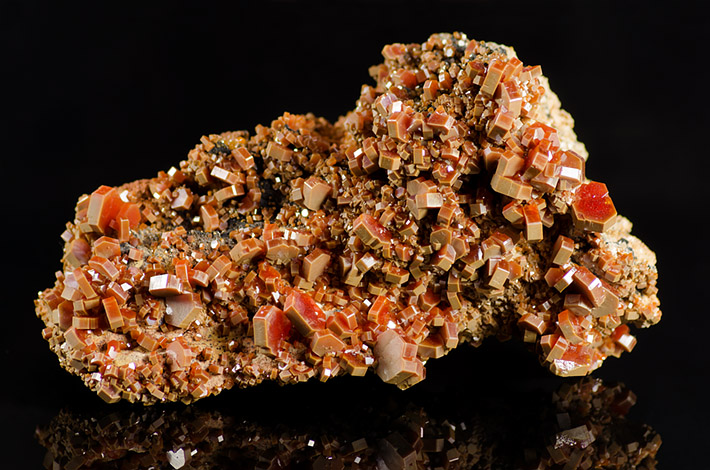 Although the mineral is technically a vanadate because of its anion group, and mined for its vanadium content, the dominant component of the normalized mineral formula is lead.

Vanadinite is generally considered a secondary mineral found in the oxidized zones of conventional deposits dominated by galena, the most common lead mineral. The presence of vanadium is usually attributed to leaching of vanadium from accompanying vanadiferous sulfides and silicates of the wall rocks in the deposit. It may be found in association with various carbonates (calcite, cerussite), sulfates (anglesite, baryte), sulfides (galena), molybdates (wulfenite), phosphates (pyromorphite, mimetite), hydroxides (mottrammite, descloizite), and oxides (limonite) occurring in an arid weathering environment. 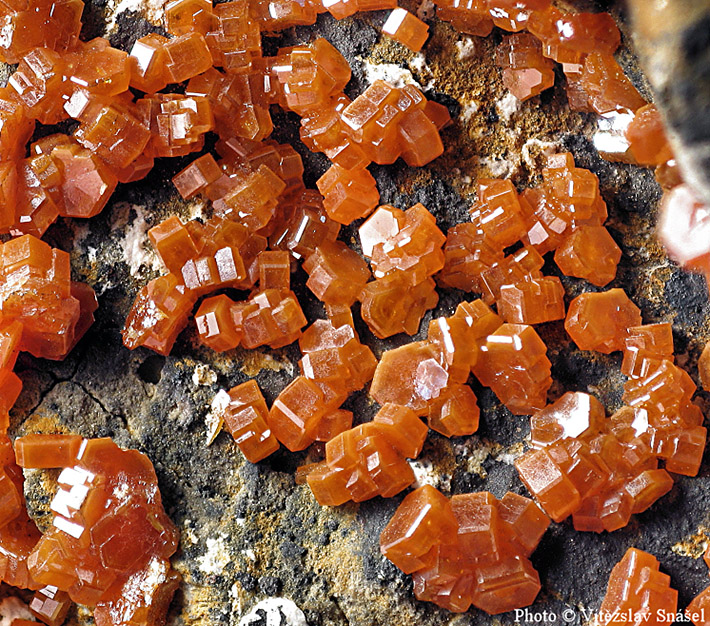 Aesthetic specimens with vanadinite are very popular among collectors. It is important to recognize that while vanadinite can be considered an ore of vanadium, it is by no means the principal source of vanadium in world consumption.

Vanadinite status as an ore mineral is problematic. On the one hand, it is one of the few minerals to contain an appreciable amount of vanadium. But on the more important other hand, nearly all the worldwide consumption of vanadium is achieved through its byproduct production from magnetite in South Africa, China and Russia.

Vanadinite is a minor ore of vanadium, where it occurs with more abundant lead minerals. It is widely distributed in the world reported at over 400 localities in Mexico, Argentina, Morocco, Namibia, South Africa, Australia, the Urals in Russia, Turkey, Austria, Spain, Scotland, and 4 U.S. states. 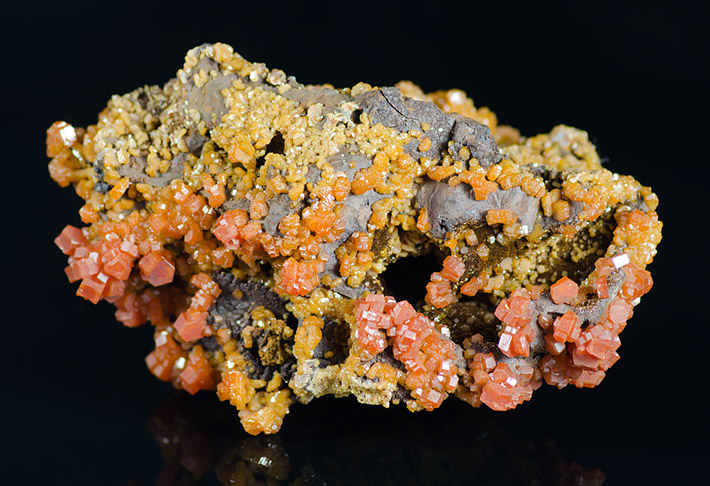 The type locality at Zimapan, Hidalgo, Mexico provided the first specimens in 1830 although, as stated in the Overview, the mineral was not considered a vanadate until its rediscovery in 1838. According to undated 19th century accounts, the earliest samples were lost at sea in transit somewhere.

Vanadinite was recovered from the lower levels of the Ahumada Mine at Los Lamentos, Chihuahua, Mexico in a bleached and sanded carbonate horizon dominated by wulfenite. These specimens were atypically dull brown. In contrast, specimens from the Michelle Mine, Rayon, Sonora, Mexico were a lustrous orange. 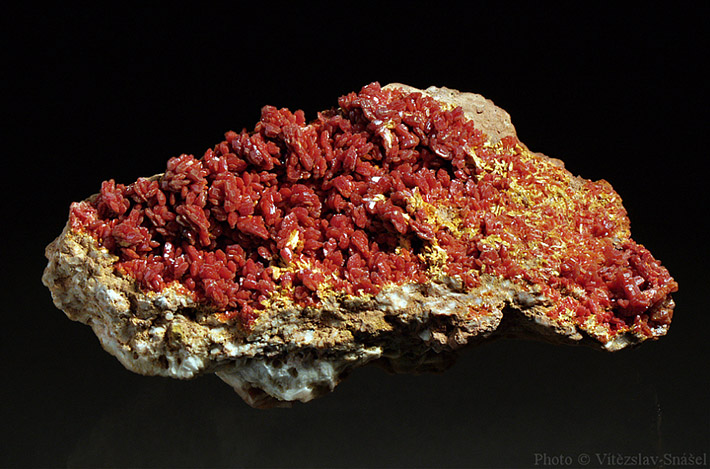 Morocco yielded the first world-class specimens from the Mibladen area, 25 km NE of the town of Midelt. There, the crystals occur in a stratiform deposit of galena and barite in Mesozoic limestones and dolomites. Artisanal miners dug over 600 shafts between 1926 and 1949 to recover the crystals that now command the admiration of collectors. The specimens are blood-red hexagonal plates, and occur in unfathomable numbers, to quote one observer. The same observer remarks that much of the output contains small, damaged, or discolored crystals, and that the damage is caused by the miners failure to exercise care in recovering samples. 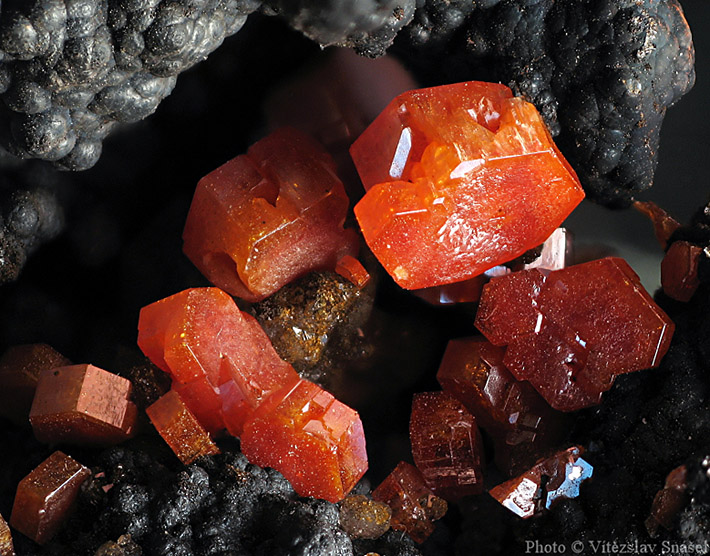 Namibia hosted what were once considered the greatest vanadium deposits in the world at the mines in Otavi Mountainland. The vanadate ores occurred in karst-created collapse breccias overlying the principal Zn-Cu-Pb sulfide orebody, and are attributed to weathering by warm (40-50o C) meteoric waters.

A survey of the country localities listed above, apart from Mexico and Morocco, clearly shows that the worldwide finds of vanadinite are inconsequential, relative to the superior quality of what was found in Morocco, and are generally small encrustations on barite.