Anglesite is a secondary lead mineral, very popular because of its nice gemmy crystals with great luster. It forms by oxidation of galena and other lead ores, often accompanied by other interesting secondary minerals.

Anglesite is an anhydrous lead sulfate mineral PbSO4. It crystallizes in the orthorhombic crystal system. Anglesite belongs to the baryte group and it is isostructural with other group members - baryte (PbSO4) and celestine (SrSO4). 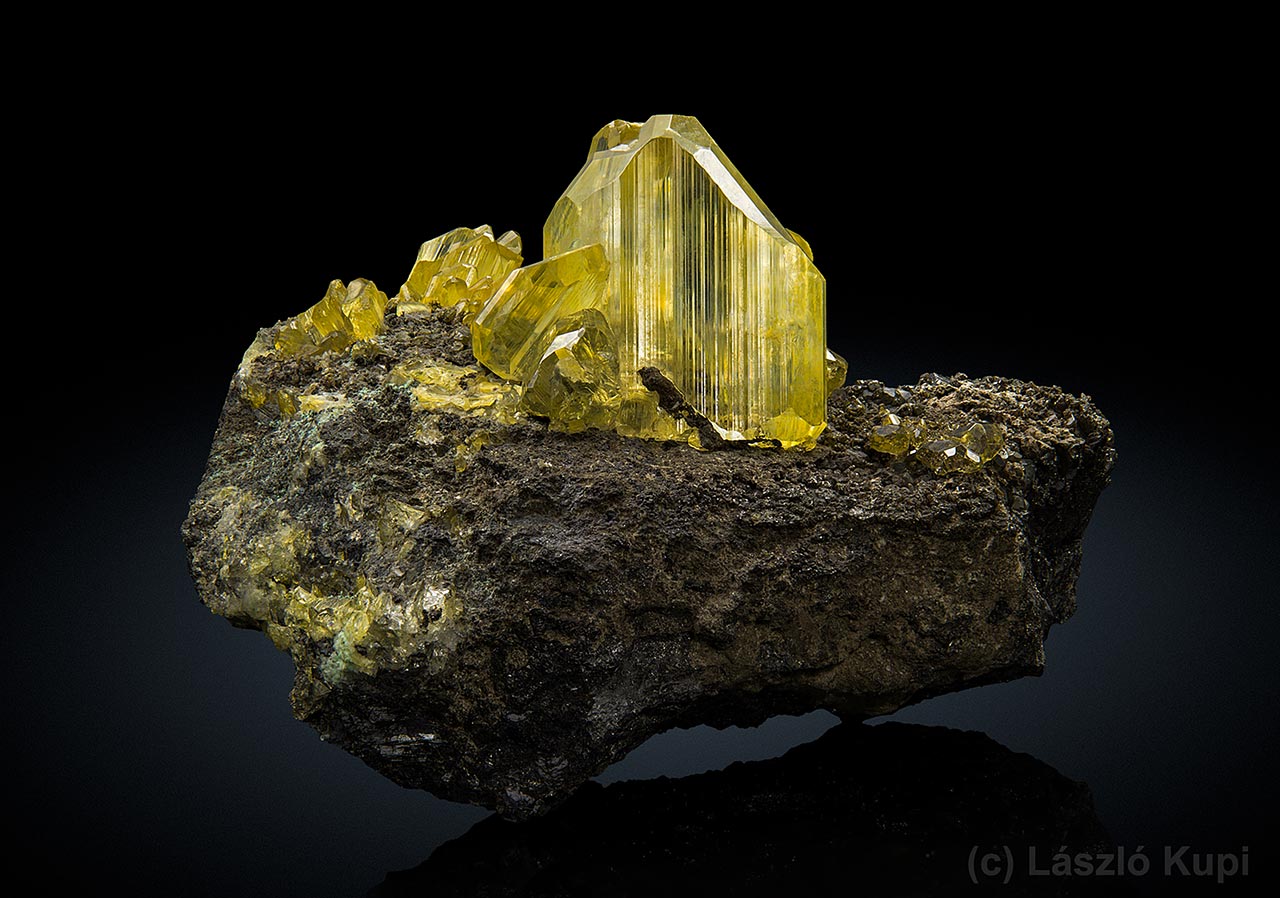 Anglesite is colorless to white, with tints of blue, green, yellow, orange or gray; in exceptional cases, it is violet. The gray tint is the result of residual inclusions of galena. Anglesite may pseudomorph after galena, creating a false isometric appearance, or after cerussite, creating other strange shapes. In some specimens, the core of the mineral remains a completely unaltered galena. A polished or sliced specimen may exhibit gray or black banding, especially if the specimen is massive. 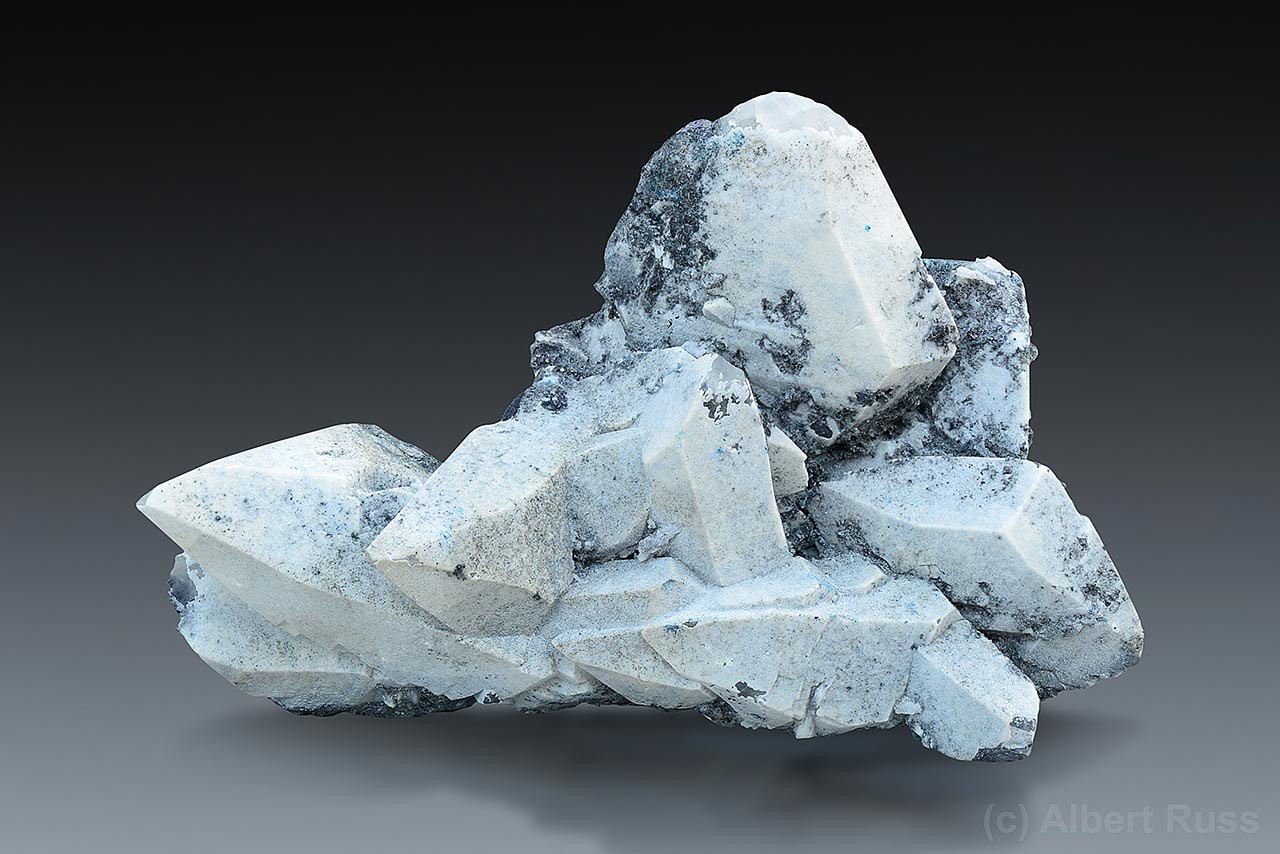 Anglesite is translucent to transparent. Its luster is adamantine, or dull if crystals are earthy. Its fracture is brittle to conchoidal. Anglesite hardness is 2.5-3.0, its streak white and its density is 6.3. Anglesite fluoresces light to golden yellow in shortwave UV light. 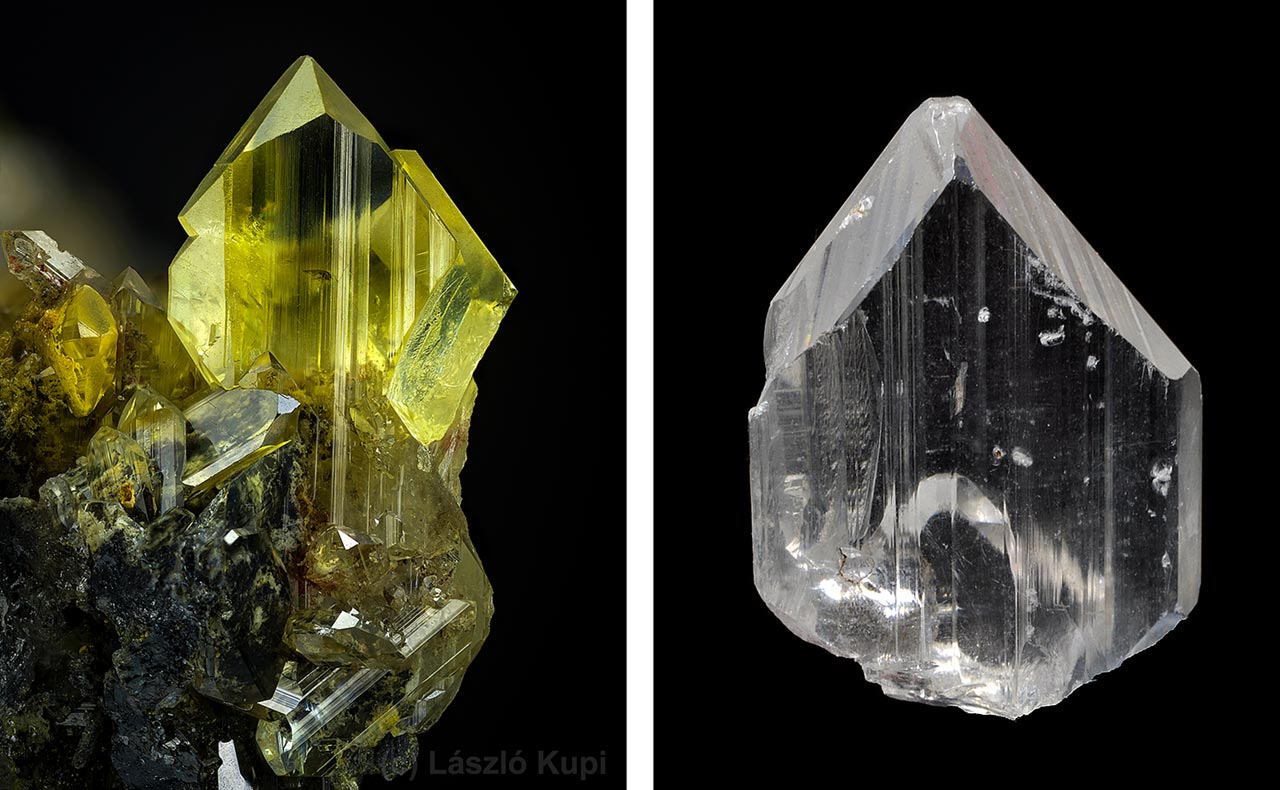 Anglesite was recognized as a distinct mineral species in 1783 by William Withering in the Parys copper mine in Anglesey, an island off the northwest coast of Wales. At the Anglesey mine site, abundant tiny brownish-yellow anglesite crystals lay in a matrix of dull brown limonite. The crystals were unusually shaped, consisting of four prismatic and four dome-shaped faces. In fact, the crystals presented a large number of possible combinations and habits, such that Viktor von Lang (1838-1921), an Austrian pioneer in the physics of crystals, was able to categorize nearly 200 varieties in his monograph on the mineral. He noted the difficulty of obtaining accurate measurements of the angle of crystal faces.

The discoverer of the mineral, William Withering (1741-1799), was an English physician known for his enthusiasm in the fields of botany and geology. As a geologist, he is credited not only with the first systematic observations of what would come to be called anglesite; but was also instrumental in identifying a new mineral species, barium carbonate, which A.G. Werner, the ‘father of German geology,’ named witherite in his honor. 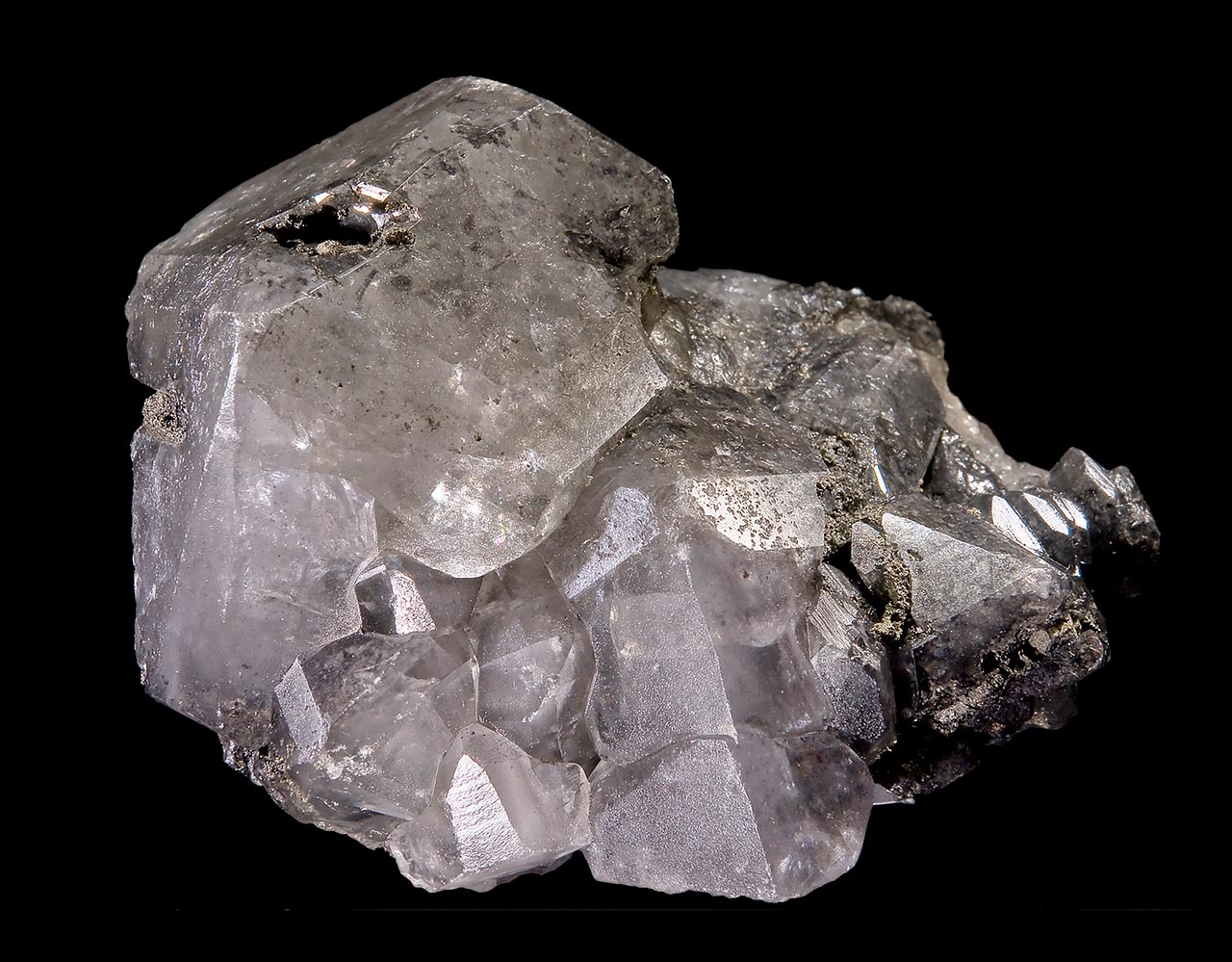 The namer of the Parys mine specimens as anglesite, Francois Sulpice Beaudiant (1787-1850), was initially a physics professor who migrated into geology and related sciences. He enjoyed a prolific career, beginning in 1817 with the publication of papers on crystallization and the 1822 completion of a 3-volume geologic atlas of Hungary. After rising to the post of Inspector-General of the University of Paris, he published Traite Elementaire de Mineralogie (1830-1832), in which he described and coined the names of a number of mineral species, including anglesite, bismuthite and cerussite.

Anglesite is a common product of oxidation of primary lead sulfide minerals. This usually happens in surface or near surface parts of the ore deposits with galena or other Pb-sulfides.

There are only three primary uses of anglesite – as a lead ore, as an occasional gemstone, and as a mineral specimen.

Lead is generally used in the manufacture of batteries, plumbing, ammunition, sound absorbers, X-ray and radiation shields, paint pigments, glass and insecticides. Anglesite is a secondary mineral which rarely forms accumulations large enough for viable mining. Mineable anglesite concentrations were identified at some large deposits in Mexico and Australia. 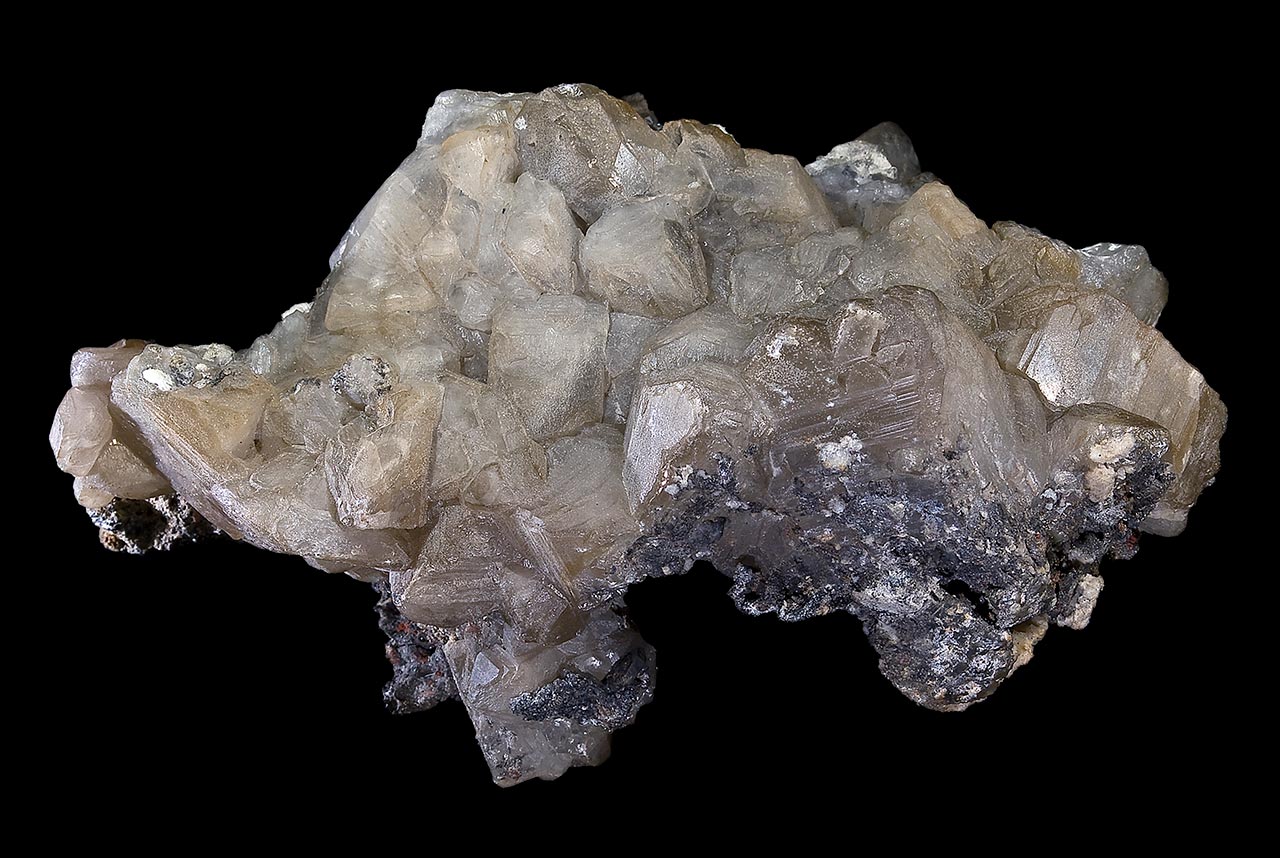 As a gemstone, anglesite has a perfect luster but it is fundamentally too soft to be employed in jewelry: it does not cut well, is easily scratched, and faceted edges become rounded too quickly. And finding gem quality crystal of decent size is not easy either.

Obviously, anglesite belongs to the popular mineral specimens. Especially good quality crystals on matrix are very expensive. This is one of the reasons why anglesite is not that popular as an ore – one good quality specimen easily returns more profit then several tons of ore.

At most localities, anglesite is found as isolated crystals in the lead-bearing lodes. The world class specimens of significant size and quality were found at Tsumeb, Namibia and at Touissit mine, near Oujda, Morocco. Beware that orange or red crystals from Touissit were artificially colored using bleach.

The anglesite type locality is the Parys Mountain Mine Complex in Anglesey, Wales, U.K. which includes the Paris Mine, Parys Mine, Mona Mine, and Morfa Du Mine. 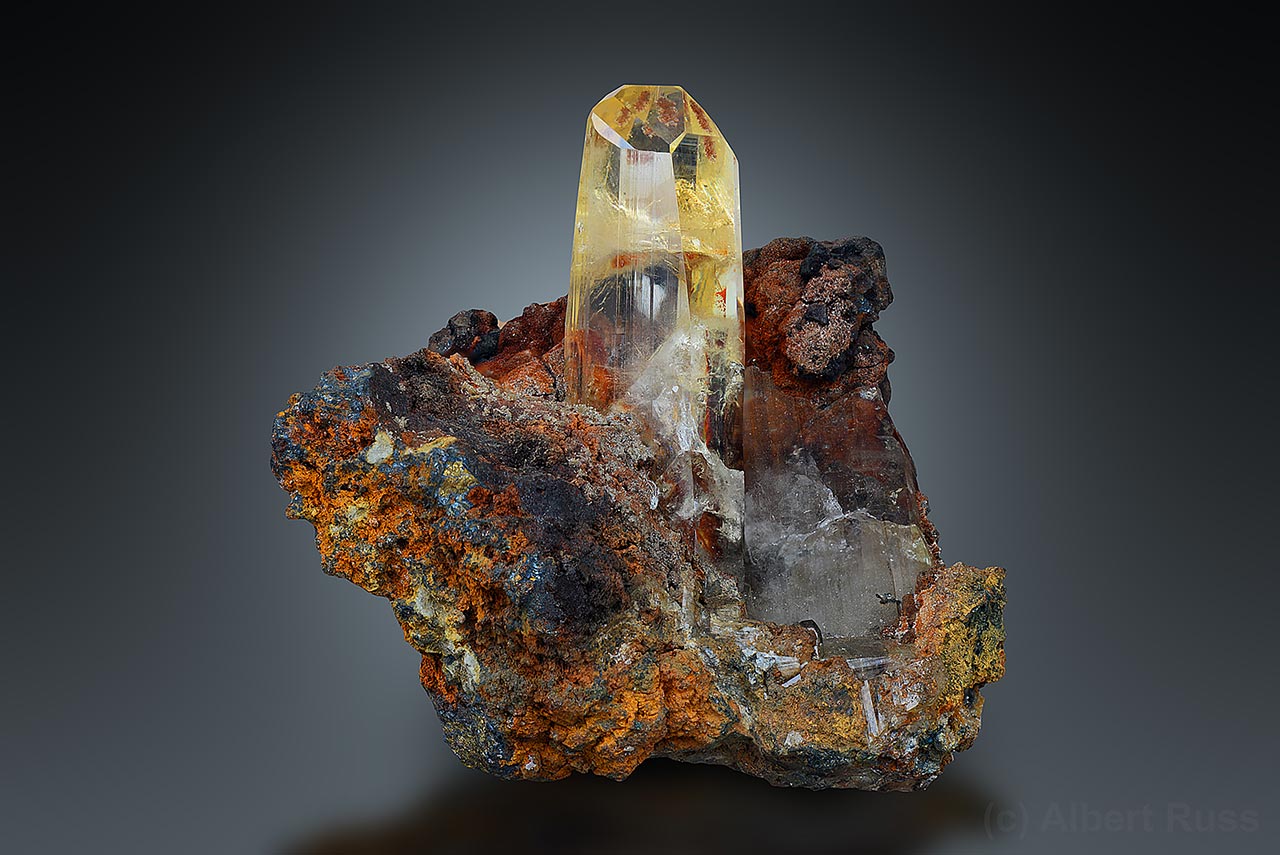 A few U.K. localities besides the type-locality specimens in Wales are at Matlock and Cromford, Derbyshire, and Caldbeck Fells, Cumbria, both in England, and at Leadhills, Lanarkshire and Wanlockhead, Dumfriesshire in Scotland where good pseudomorphs of anglesite after galena are known.

Other European sites include: Bleiberg in Carinthia, Austria; Mežica in Slovenia; Müsen, Littlefeld, Siegen, and elsewhere in Siegerland, Germany. Monteponi and Montevecchio, near Iglesias, Sardinia, Italy, home of granular galena/anglesite encrusting cavities in the bedrock. 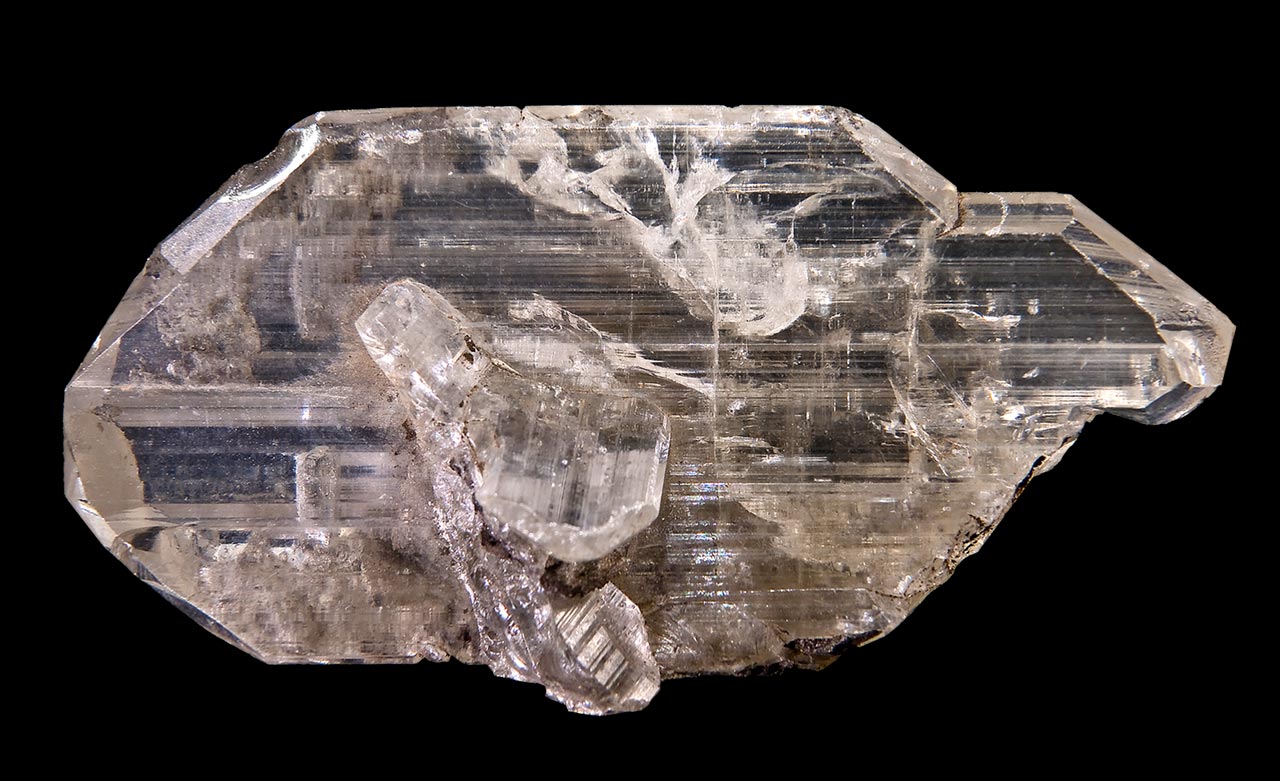 The classic sites in Australia are at Broken Hill, New South Wales and at Dundas, Tasmania. In Mexico, the important sites are at Los Lamentos, Chihuahua; the Amelia mine, Santa Rosalia, Baja California; and at San Felipe Canyon, Aconchi, Sonora. Anglesite is also found at Beresovsk, near Yekaterinburg (Sverdlovsk), Middle Ural Mountains, and at Nerchinsk, Siberia, Russia.

In the US., at the Wheatley mine, Phoenixville, Chester County., Pennsylvania; at the Bunker Hill mine, Coeur d’Alene district, Idaho; in the Hypotheek mine, south of Kingston, Piute County, at the Last Chance and Tyler mines, Wardner, Shoshone County, and at the Eureka Hill mine, Tintic district, Juab Co., Utah; and at the Grand Reef mine, Graham County, Arizona.