Celestine (aka celestite) owes its name to its delicate blue (celestial) color. Although not a well-known mineral name, celestine has a certain cachet because the strontium it contains is famous for the brilliant red flashes it produces when used in fireworks.

Celestine is a strontium sulfate (SrSO4) which belongs to the baryte group of sulfates. It is a member of the orthorhombic crystal system, characterized by well-shaped tabular or elongated crystals, but can also be massive, fibrous, lamellar, or earthy. Crystals are sometimes striated. 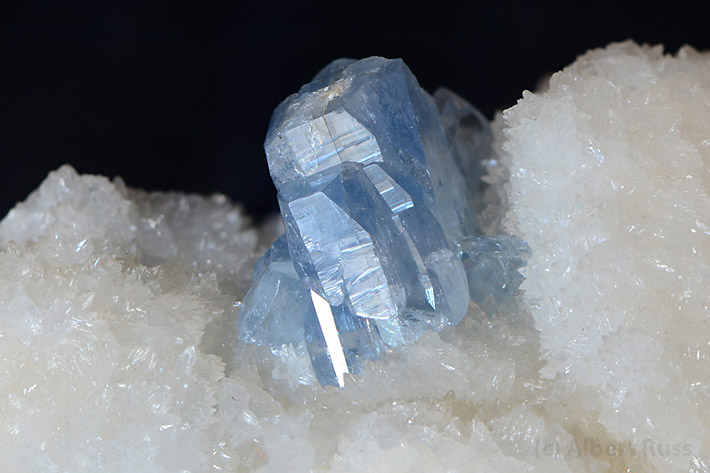 Celestine is usually colorless to pale blue with some color zoning induced by impurities: red, pink, orange, pale green, pale brown and black. It is weakly pleochroic, and often fluoresces yellow or blue in shortwave UV light. Scraped particles may flash bright red when burned, just as they do in fireworks. Celestine is transparent to translucent in thin pieces. 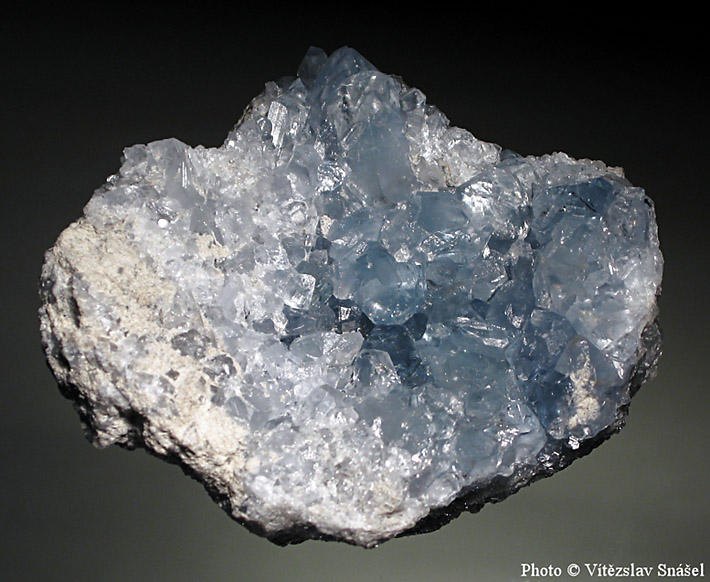 Celestine is also known as celestite, celestina and schätzit or schützit. The intermediate members of the baryte-celestine solid solution series are often called barian celestine or barytocelestine. 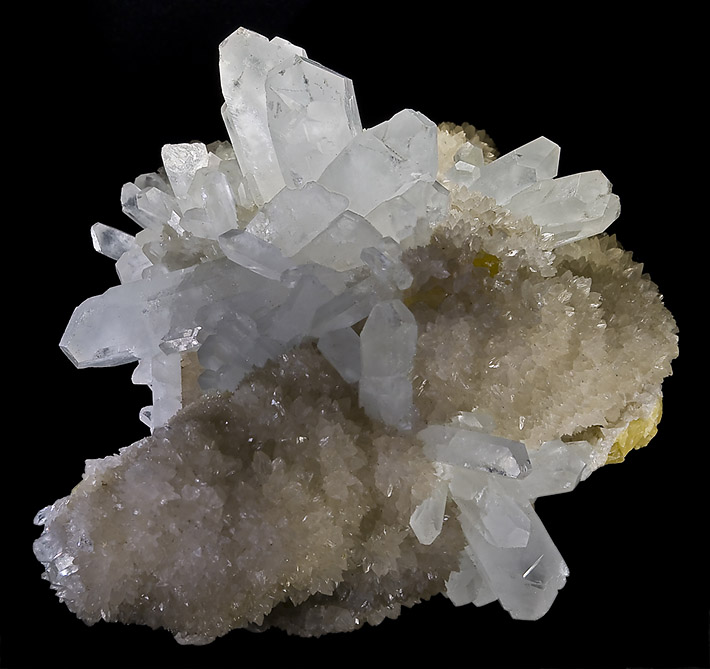 Celestine's true identity as a strontium mineral went unrecognized until strontium was discovered in the late 1780s and formally described in 1792. Superior celestine crystals were discovered in Sicily before the 1780s, when strontium was finally identified, but they were originally misidentified as a variety of barium mineral. Pure strontium was isolated by Sir Humphrey Davy in 1808 and named after the original source near the village of Strontian in Scotland. 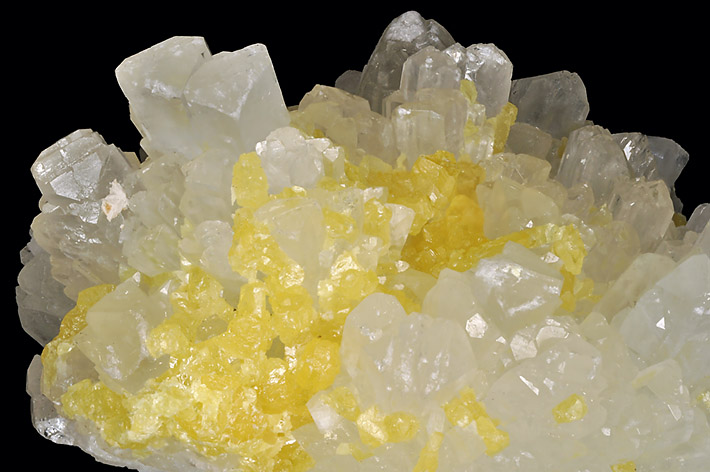 Andreas Gotthelf Schütz originally named specimens fasriger schwerspath in 1791. Martin Klaproth, discoverer of uranium and zirconium (1789), and cerium (1803) named specimens schwefelsaurer strontianite aus Pennsylvania in 1797. Abraham Gottlob Werner (the father of Neptunism) applied the German name zoelestin (from the Greek cœlestis or Latin caelestis for "celestial"), in allusion to the faint blue color of the original specimen. Finally, Dietrich Ludwig Gustav Karsten, an early advocate of improved mineral classification systems (following in the footsteps of Werner) renamed the mineral schützit in 1800, but the name did not stick.

Strontium (Sr) is a biologic component of the skeletons of some deep sea radiolarians (Acantharea), and a normal component of stony coral. Strontium (expressed as celestine) is less commonly found in hydrothermal veins or mafic rocks. 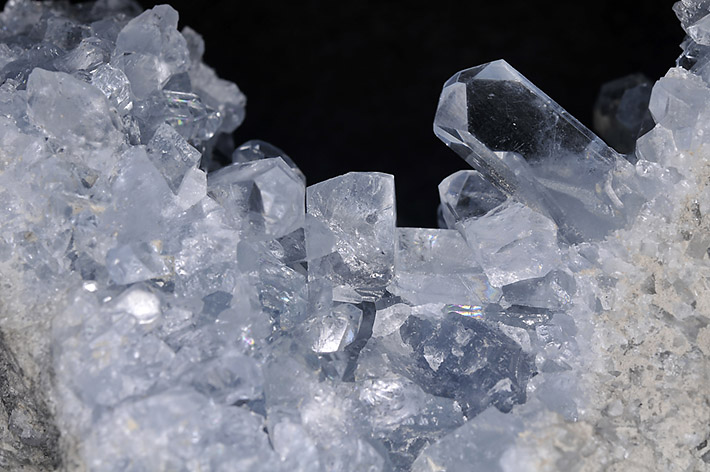 The likely cause of the development of sedimentary celestine is the burial dissolution and expulsion of biogenically stored strontium incorporated in carbonate rocks. Low-temperature geochemical studies show that Sr in pore waters is in equilibrium with celestite at shallow water depths. With increasing depth, Sr concentration increases faster than the sulfate concentration decreases, driving the preferential precipitation of celestine. Migrating strontium-bearing groundwater or basinal brines can eventually dry up and create evaporite deposits, where celestine is found associated with halite, gypsum, anhydrite and native sulphur, among other various sulfate salts.

Less often, celestine may be found in hydrothermal veins. It is also known from some pegmatites.

Celestine (SrSO4) is one of two principal ores of strontium, the other being strontianite (SrCO3). To be used industrially, strontium is generally produced as a metal by reducing strontium oxide with aluminum. 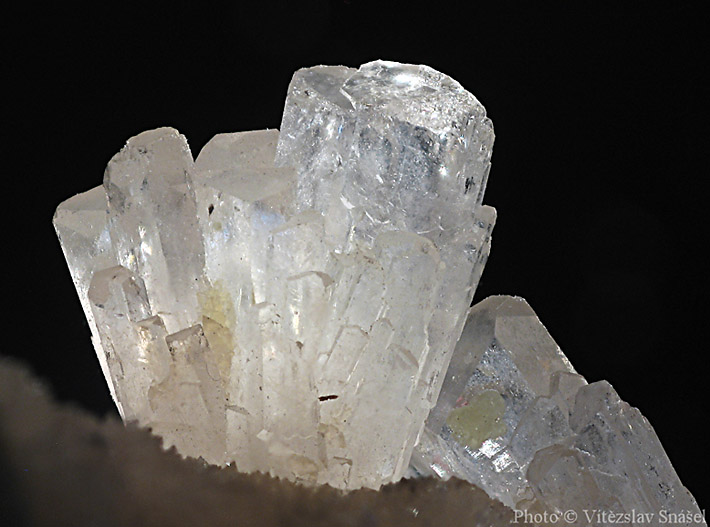 The strontium contained in celestine has several uses, based on its reactivity with air and water and its radioactive decay properties.

Fireworks consume 5% of the world production of strontium and it all goes up in smoke: it is responsible for the brilliant red flashes that are an integral part of the display. Strontium nitrate is also used in military tracking ammunition.

In metallurgy, strontium carbonate is used in fabricating ferrite magnets, refining zinc and processing sugar beets. When alloyed with aluminum, it will develop increased hardness as soon as it is flexed. On the other hand, strontium added to silicon-aluminum metal castings will reduce the brittleness of the alloy. 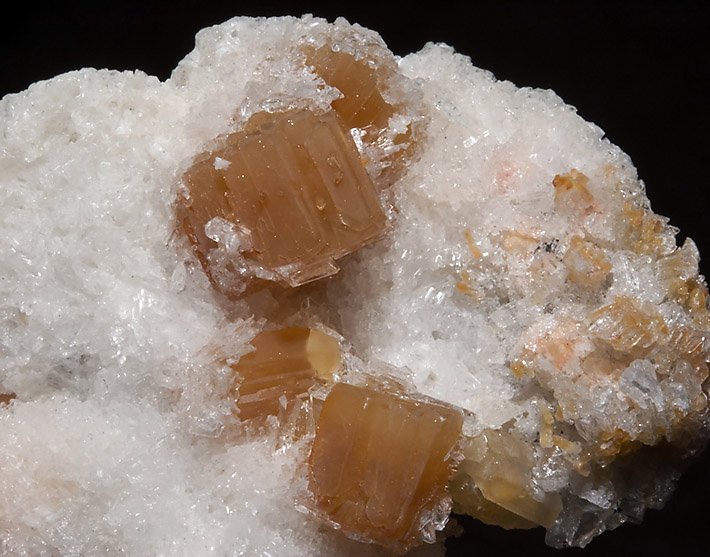 Night workers employed outdoors can depend on strontium for a modicum of enhanced safety: strontium is combined with aluminum to form strontium aluminate, the brightest of all modern phosphorescent glow-in-the-dark materials that can be applied to clothing and plastics to provide high nighttime visibility; the aluminate absorbs light during the day, and slowly releases illumination during the night-time hours.

As a radioactive byproduct of nuclear fallout, strontium is a highly active beta-emitter with a half-life of 23 years. Although toxic to human bone marrow when absorbed by bone tissue, its high-energy activity makes it an ideal power source for generating small-scale electricity for remote weather stations, navigational buoys and space stations.

On a benign note, strontium acetate has proven to be ideal for reducing the harshness of toothpaste on sensitive teeth.

Celestine is the most common strontium mineral, found in small quantities worldwide, but few localities are known for fine large crystals. An interesting fact is that no great celestine specimens come from China, but most celestine ore is mined there. 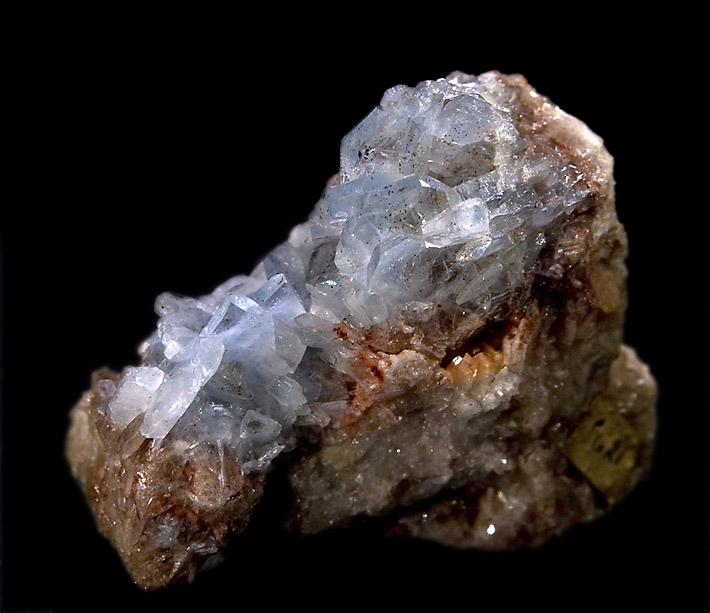 Perhaps the most famous occurrence is the Crystal Cave Geode found in a town (Put-in Bay) on a small island, South Bass Island, in Lake Erie, Ohio. The island was an ideal location for vineyards because the moderating effect of Lake Erie created a long growing season in a mild climate. Gustav Heineman emigrated from Germany in 1888 to start his own winery. Workers digging a water well in 1897 to supply the Heineman family winery discovered a vug whose walls were covered in celestine. Exploration of the vug revealed a much larger cave in which crystals reached 18 inches in length, and were so abundant that the owners were able to harvest the crystals to sell for fireworks.

The coming of Prohibition in the U.S. (1920-1933) was catastrophic for the 17 wineries on the island, causing most of them to fail. Gustav's son Norman saved the family operation and assured its survival by halting the harvesting of celestine and converting the cave into a tourist attraction, which it remains today. Surviving celestine examples on display are said to be almost meter wide. Tours are conducted daily from May through September. There appear to be no Heineman Winery specimens available, but samples from a nearby site, Clay Center, Ottawa County, Ohio are still available for sale. 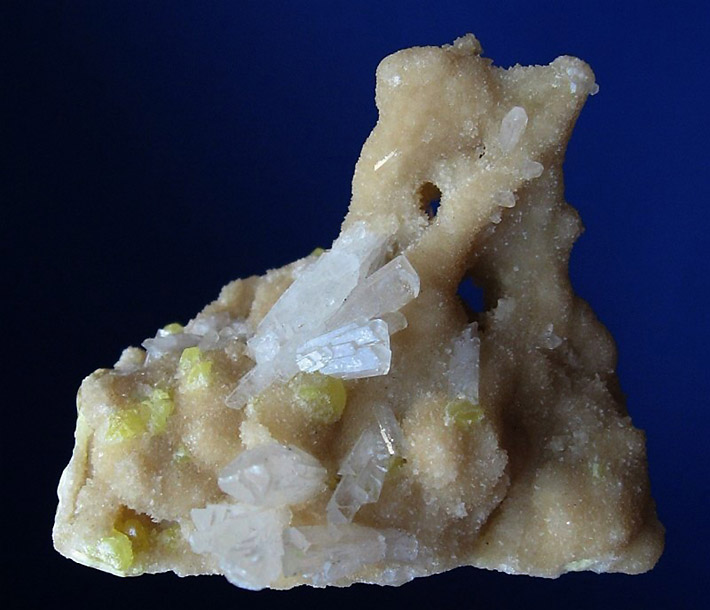 Another world-famous locality is the northwestern coast of Madagascar, discovered in 1967 on the shore of Bombetoka Bay, near the village of Sakoany. Tons of magnificent specimens were recovered from a single 30 m thick lens containing a mixed assemblage of celestine-bearing geodes and celestine crystal clusters sandwiched between 65 m.y.o. beds of crinoidal limestone and grey sandstone. The largest geode recorded reached 60 cm in diameter, and the largest crystal cluster reached 15 cm in diameter. The deposit is exploited today by a swarm of 15 m deep excavations opened several hundred meters upslope from the shoreline. Annual production of 15 tons has been reported. 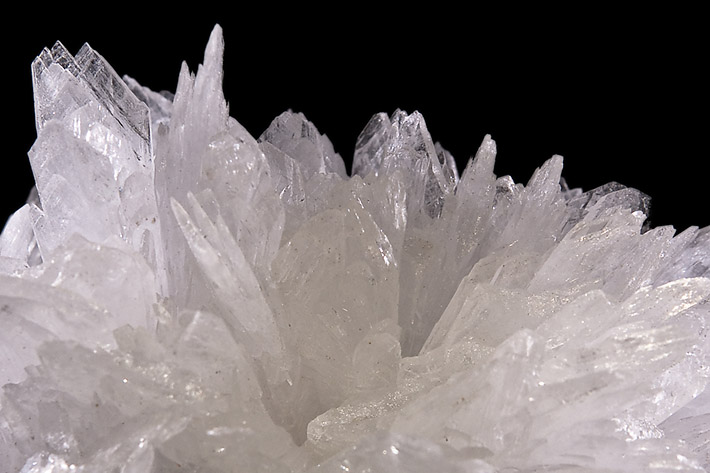 In England, in and around Yate, near Bristol, celestine occurs as a primary and replacement mineral in a Triassic playa mudstone, accompanied by gypsum (CaSO4.2H2O) and halite (NaCl). Celestine is so dominant at Yate that its presence is explained by the hypothesis that the parent source of strontium was aragonite (8,000 ppm intrinsic Sr content) in carbonate beds rather than calcite (400 ppm). Dolomitization of the carbonate would have forced Sr out of the aragonite in such quantity as to make celestine precipitation inevitable. Quarrying of celestine continued from the 1820s to the 1990s; at one time, Yate produced 90% of the world supply. Today the quarry site is covered by a shopping mall.

In Norway, the Bamble area is a geologic province containing an unusual assortment of highly metamorphosed, sheared and strained metasediments, gneisses and intrusives, some of which are the direct result of melting of the nearby sediments. Metasomatism is suggested as the reason for celestine development, but no specific locality citations are given.

In Germany: the Konrad mine, near Salzgitter, Lower Saxony is a historically mined iron-ore deposit containing a principal ore horizon at a depth of 1000 m; it was most recently actively mined from 1961 -1976. Following closure, the mine was converted to a repository for low and medium level nuclear waste. The quarries near Hamm and Münster in Nordrhein-Westfalen, Germany provided most of the celestine for German industry during the 19th century. 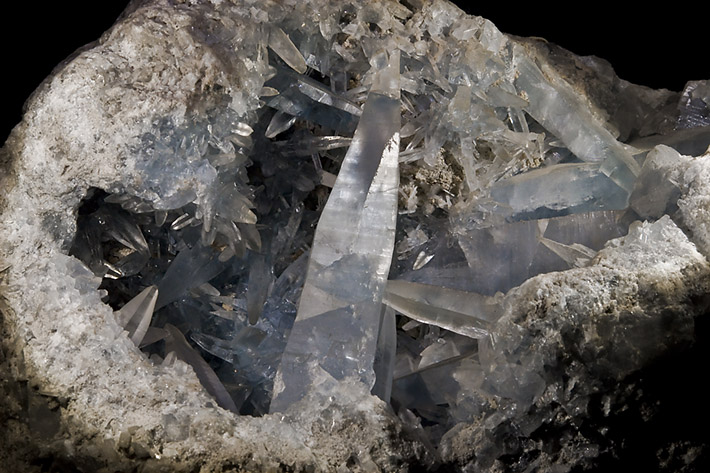 Great celestine crystals are known from numerous localities in Sicily, Italy. These crystals were known for centuries but were confused with baryte until the discovery of strontium. Sedimentary formations contain great crystals of gypsum, native sulphur and celestine. A quite similar association is known from Tarnobrzeg in Poland.

Numerous other celestine localities include: Beineu-Kir in Turkmenistan; Machów in Poland; Špania Dolina in Slovakia; Lafarge Quarry and McGregor Quarry in Canada; Wessels Mine and Nchwaning Mines in South Africa; and El Tule Mine and Mina Ilusion in Mexico.