Native sulphur is one of the few non-metallic and naturally occurring native elements. Despite huge drop of its industrial use, the native sulphur is still mined today. It can form highly aesthetic bright yellow crystals, which are very popular among mineral collectors.

As the sulphur is widely available in its native form, it was known since ancient times. First literature references are as old as Torah (Genesis), Bible, Ebers Papyrus or Odyssey. It has been used since ancient times until today, when sulphur is still the super important material for chemical industry. 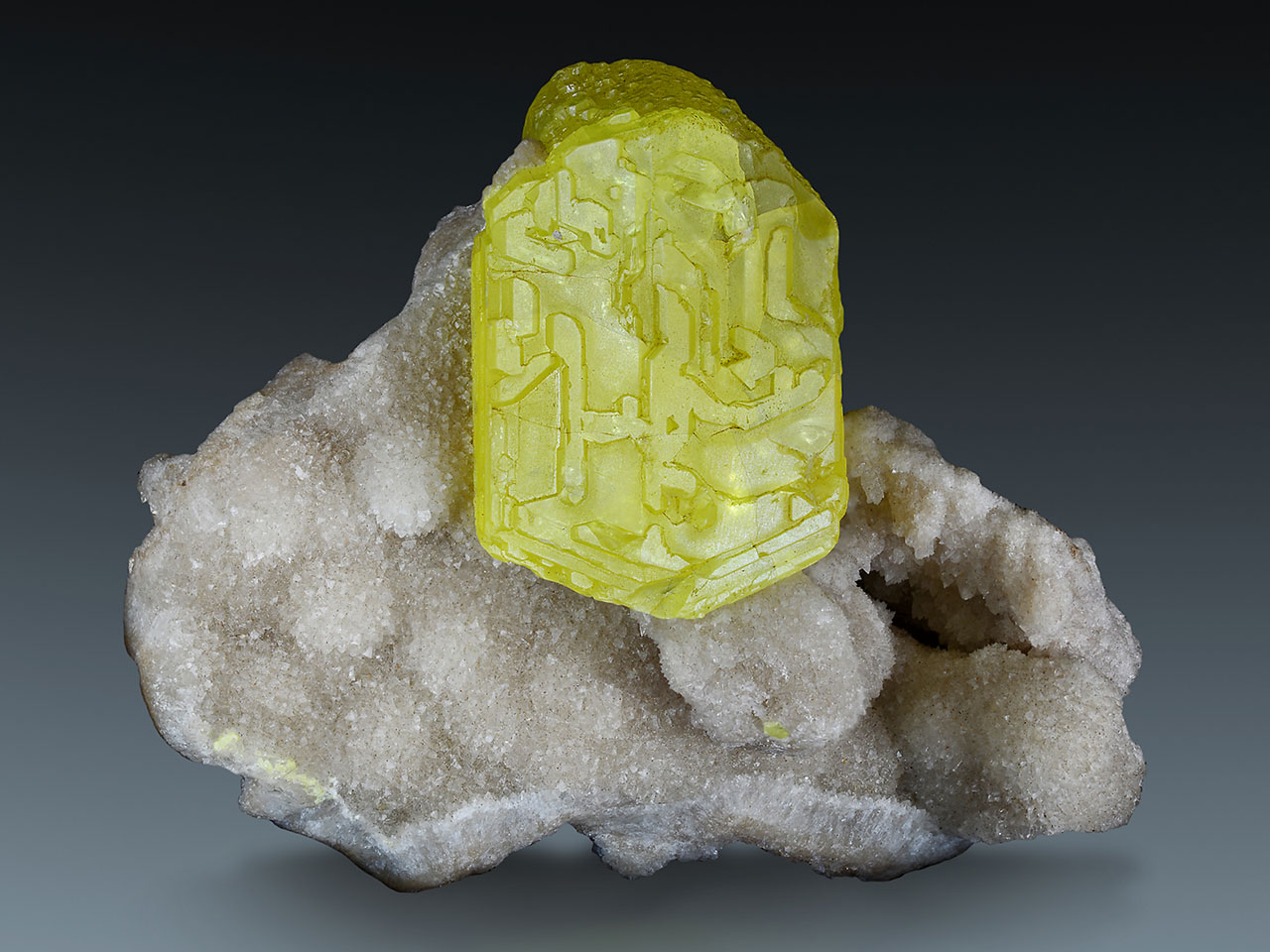 Spelling of sulphur is still topic for a debate. The US and international spelling is mostly using sulfur, British English uses sulphur. The official IUPAC element spelling is sulfur. However, the IMA still uses sulphur as a valid mineral name. So we will stick with the IMA name in this article, despite sulfur spelling being more and more prevalent.

Sulphur was also referrenced as a brimstone (burning stone), namely in old translations of Bible.

Native sulphur is a naturally occurring non-metallic element, which belongs to the sulphur group. The classic native sulphur is orthorombic, other sulphur polymorphs are monoclinic rosyckýite and clinosulphur (previously named sulphur-β). 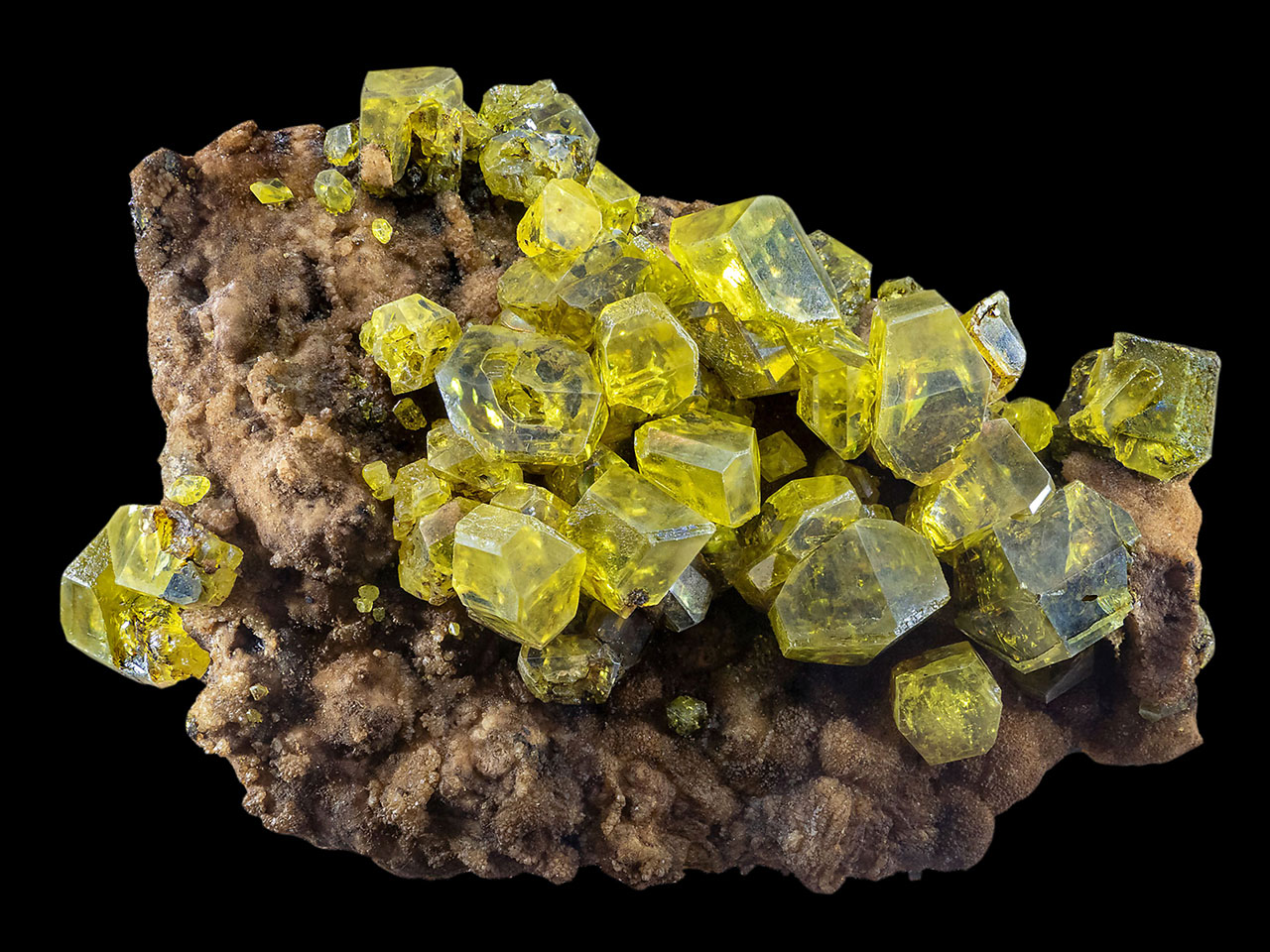 The most common crystals are dipyramids with flat tops, while tabular or disphenoidal crystals are less abundant. Sulphur crystal are often skeletal or hoppered and can be rounded and/or distorted. Sulphur also occurs as crystalline coatings and encrustings, radiating aggregates, stalactites and massive specimens, sometimes even with bubbles. 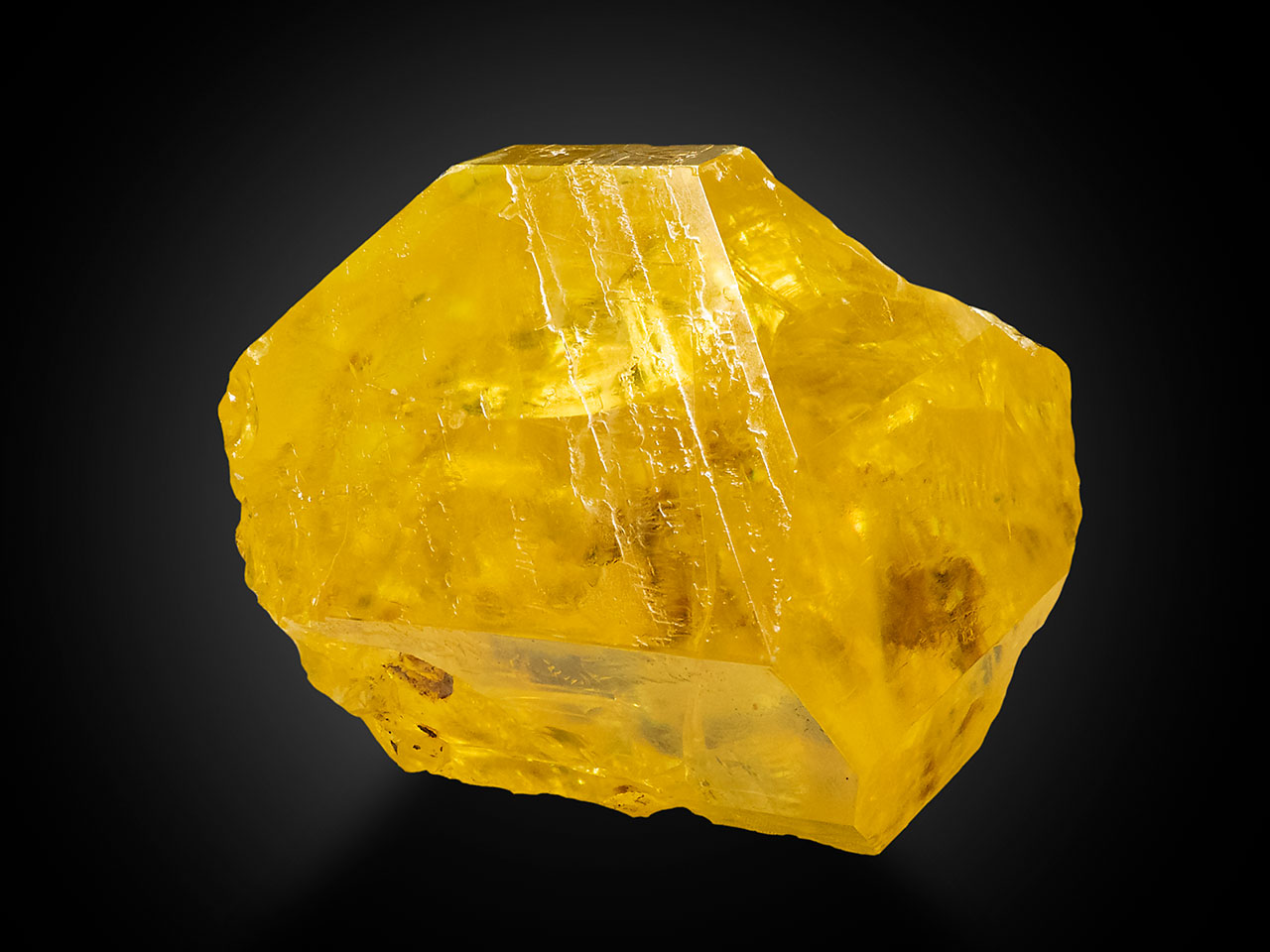 Sulphur has 23 known isotopes, but only 4 are stable. The vastly prevalent is 32S with about 95%. 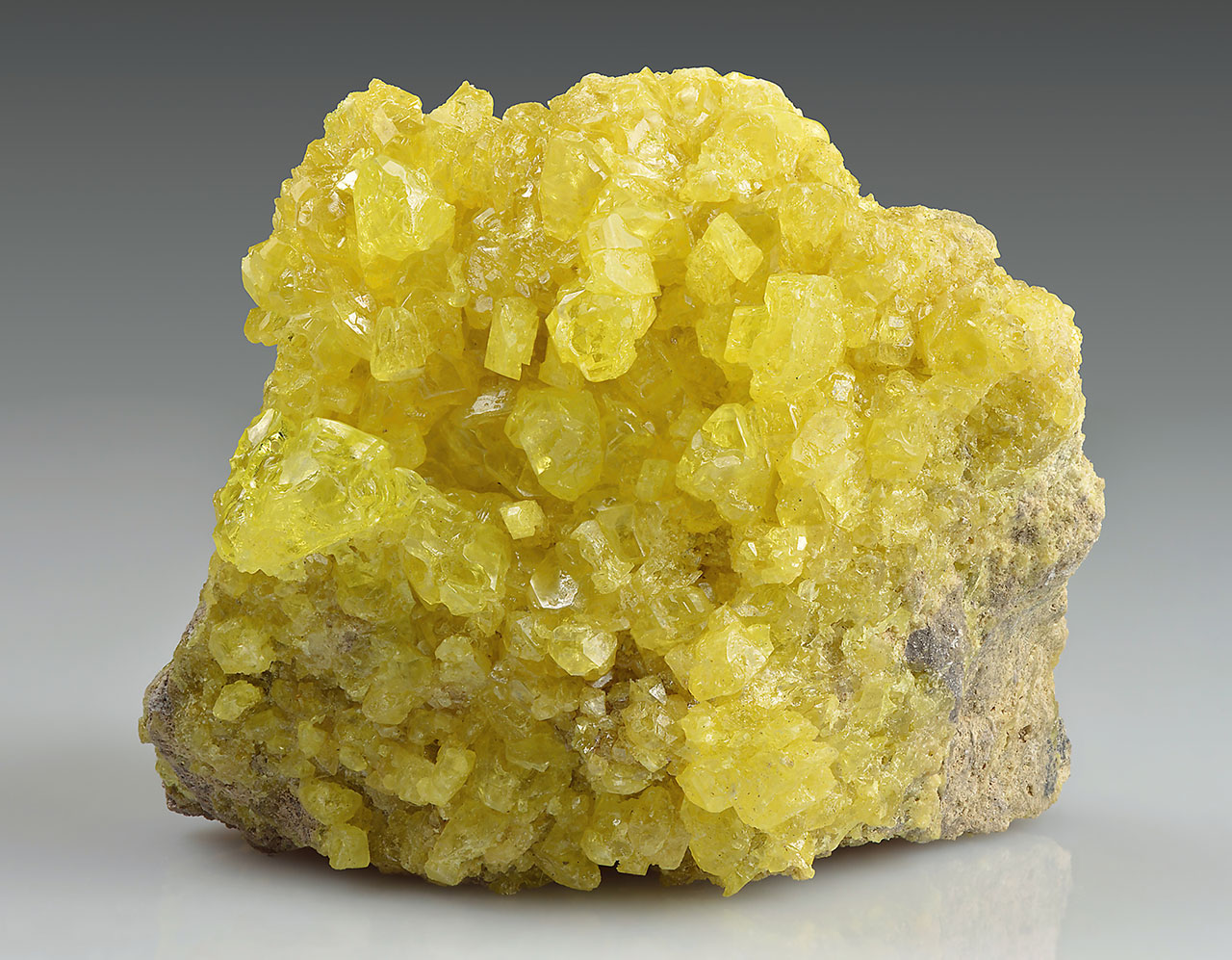 The pure sulphur is bright yellow, impurities can turn its color to yellow-brown, pale brown, orange, yellow-green or yellow-gray. Molten sulphur changes its color to orange and above 200 °C to red. Sulphur streak is white to colorless. Sulphur is excellent electrical insulator. 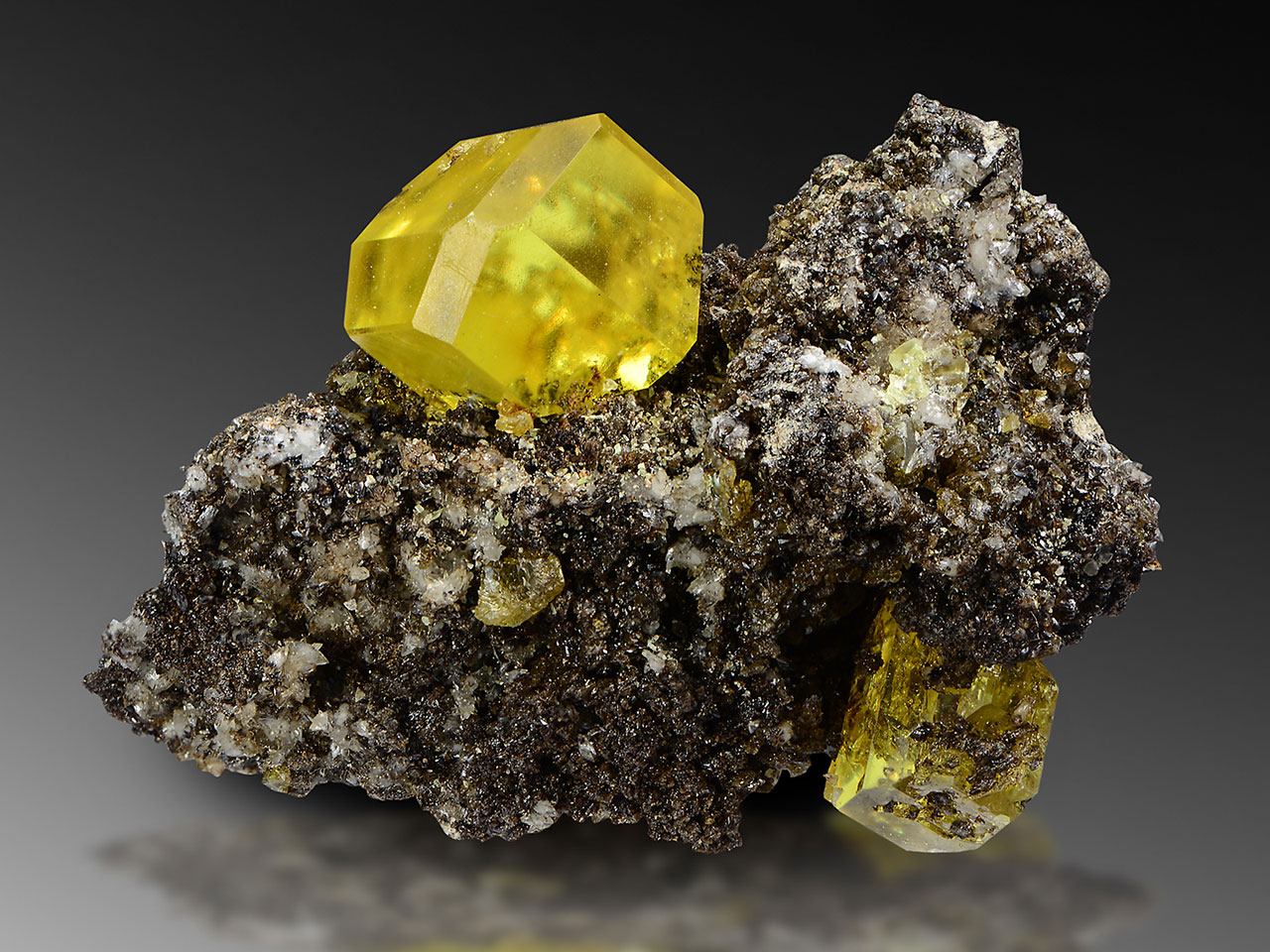 Other unwelcome feature of the native sulphur is its sensitivity to moisture. Despite being non-soluble in water, the native sulphur crystals slowly react with moisture and loose luster. Crystal can get etched surface after longer period in moist environment. Also washing in hot water is not recommended: sulphur melting point is just 115.2 °C and hot water can cause surface damage too.

Unlike most minerals, sulphur burns in air, and produces a typical blue flame while releasing sulphur dioxide SO2. The sulphur wildfires - labeled as a blue lava - occur naturally at some volcanoes.

Obviously, its not a true lava but burning streams of molten sulphur. The molten sulphur itself is red but the sulphur flames are electric-blue and usually visible only at night. These exotic wildfires are common at Kawah Ijen, Indonesia or Dello, Ethiopia, but were reported from many other places worldwide.

Sulphur is the 10th most common element in universe and the 5th most common on Earth. However, pure elemental sulphur is not that common, most is bonded in sulfides and sulfates.

Native sulphur very often occurs in sedimentary environments, namely evaporite deposits and salt diapirs, where it is formed by reduction of primary sulfates – mostly gypsum and anhydrite. This reduction is caused by sulfate-reducing bacteria. 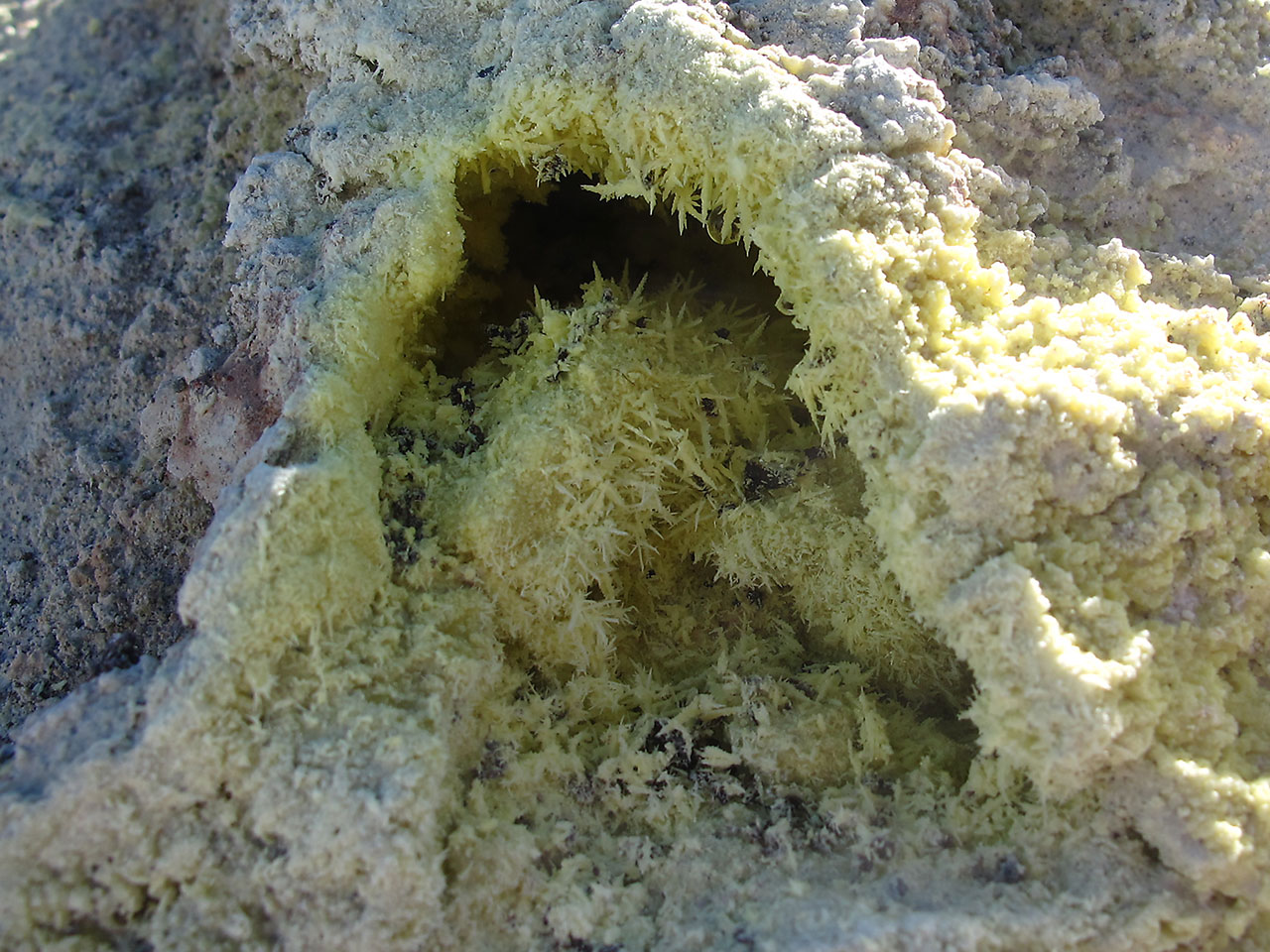 Some fumaroles do produce native sulphur, alongside some sulfides. Similar processes are known from burning coal dumps, where native sulphur could form as tiny crystals or crystalline crusts. 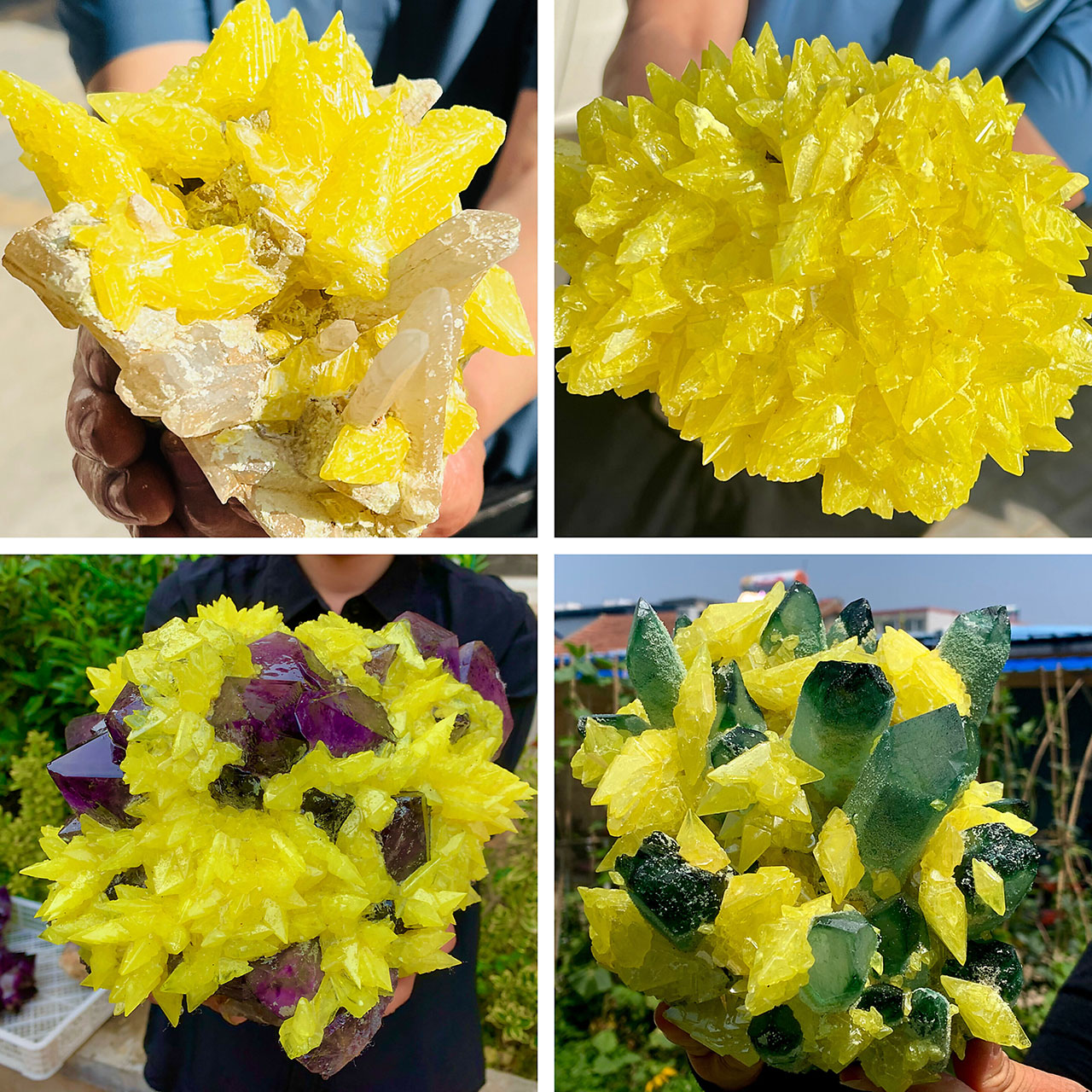 The sulphur crystals can be grown from sulphur disulfide (CS2), toluene or benzene. Some of these fakes – like native sulphur crystals on amethyst geodes – are very obvious fakes. But there were also very sophisticated fakes of synthetic sulphur crystals grown on genuine Sicilian rocks, where these crystals naturally occur. Such fakes are very difficult to recognize and sometimes only lab analyses can confirm the origin.

Native sulphur is very often present in evaporite deposits and salt domes, where it occurs together with halite (rock salt), gypsum, celestine and baryte, less often also with aragonite, calcite and anhydrite.

The sulphur producing volcanic vents often produce also realgar, cinnabar, and a variety of more uncommon minerals. Native sulphur is produced also by decomposition of various sulfides. It is often associated with galena, stibnite, covellite and other sulfides. 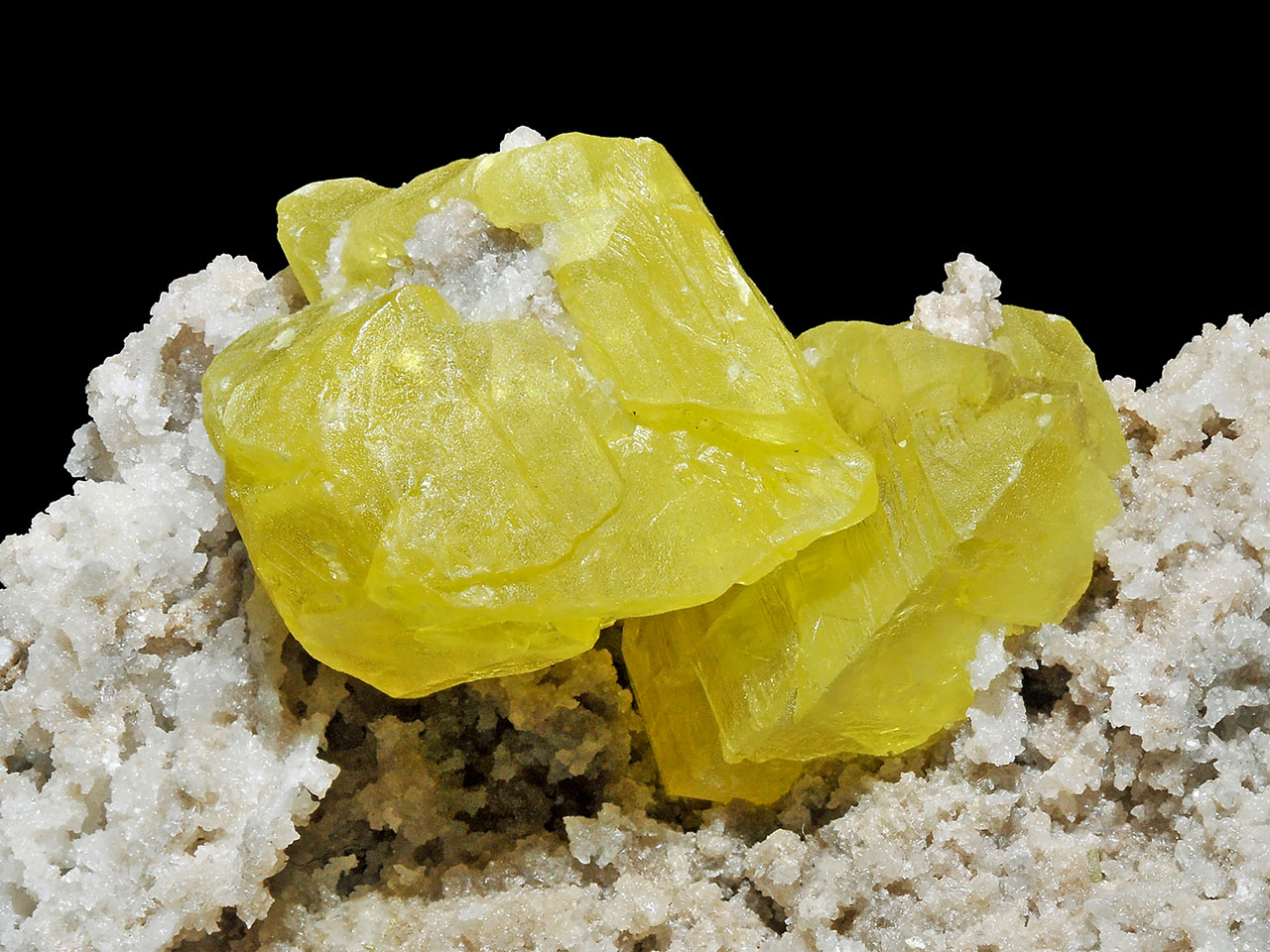 Sulphur is very often associated with bitumens, which form inclusions within sulphur crystals or coatings on it. Bitumens sometimes fill the void in the vugs containing sulphur crystals.

Sulphur was originally recovered in its native form from evaporites, salt domes and volcanic deposits. These sources are now of low importance, most of the sulphur is currently recovered as a byproduct from oil and gas mining.

The ancient use of sulphur was in traditional medicine, mostly as a creams. The other use was in production of black powder, referenced as early as 1044 AD from China. The black powder is a mixture of sulphur, potassium nitrate and charcoal. 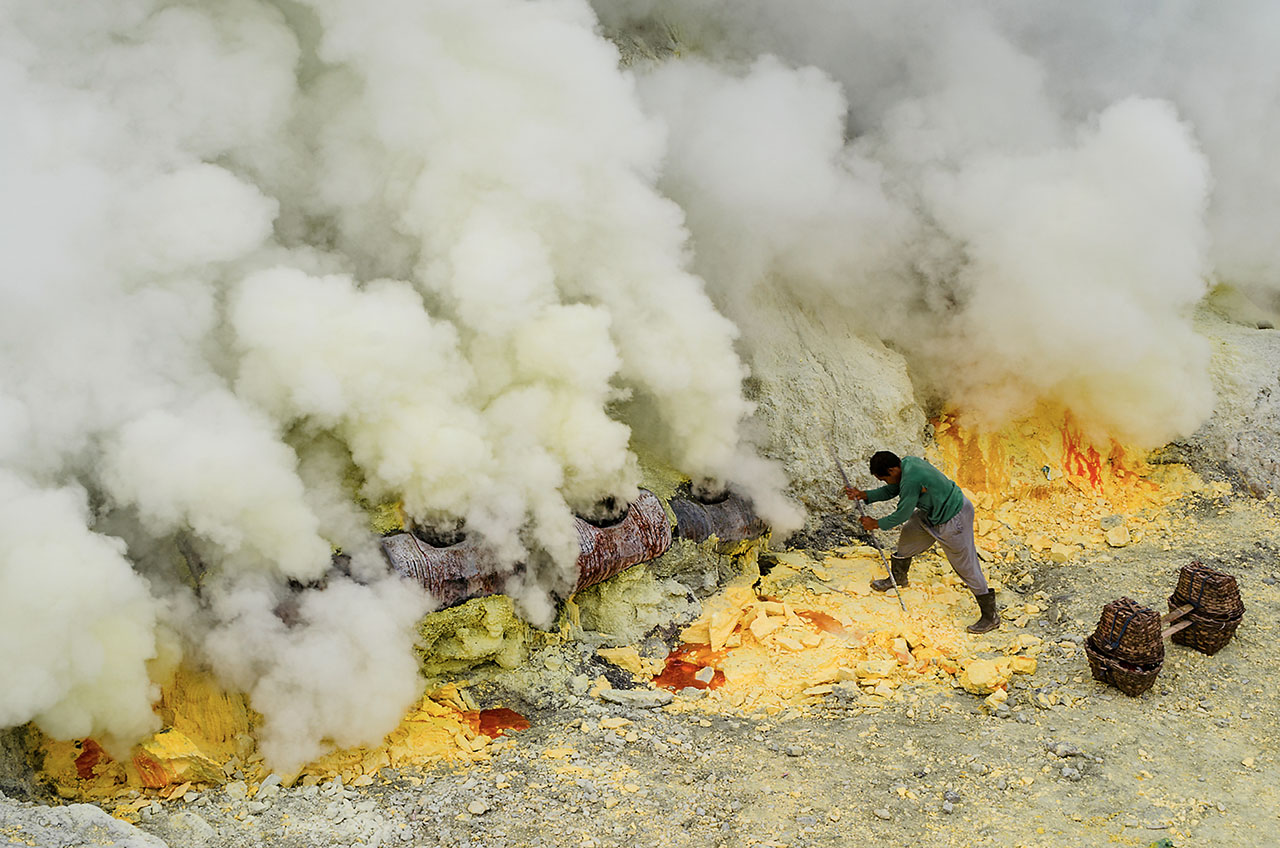 Sulphur is used in production of cellophane, rayon, and vulcanization of rubber. Sulfites are used as a paper bleach and to preserve dried fruit and wine. 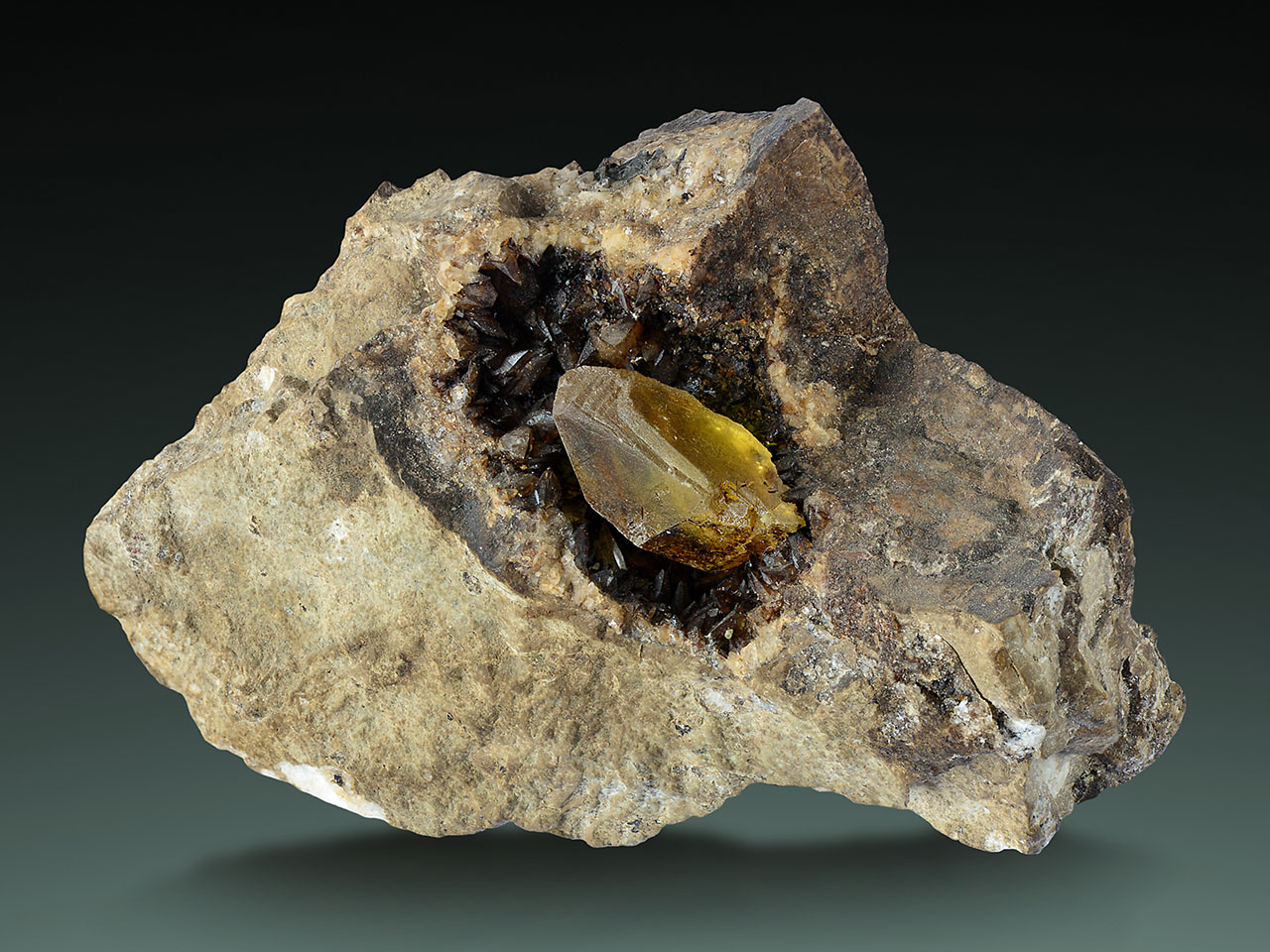 We can also consider vast amounts of gypsum and anhydrite as a sulphur application. However, these minerals are mined directly or produced by removal of SO2/SO3 from coal power plants and iron smelting factories emissions.

Besides industrial applications, sulphur is essential element for all life. It is part of some amino-acids, vitamins, keratin, insulin and many other critical organosulfur compounds, which secure basic functions of living organisms.

The most famous native sulphur localities are definitely in Italy. There were as many as 1400 sulphur mines recorded on Sicily alone and there are over 100 sulphur localities referenced just in the last few decades! The most famous mines are Girgenti, Cianciana, Cozzo Disi, Gibellina, Racalmuto and many others in Agrigento Province, then in the mainland the Perticara in Rimini Province produced outstanding specimens. Very interesting are also sulphur crystals in marble vugs from Carrara in Tuscany, Italy.

Other famous European localities include Machów Mine in Tarnobrzeg, Poland; Novoiavorivsk deposit in Lviv Oblast, Ukraine and the Conil Mine in Cadiz Province, Andalusia, Spain. Large and perfect sulphur crystals were found at Vodinskoe Deposit in Samara Oblast, Russia. 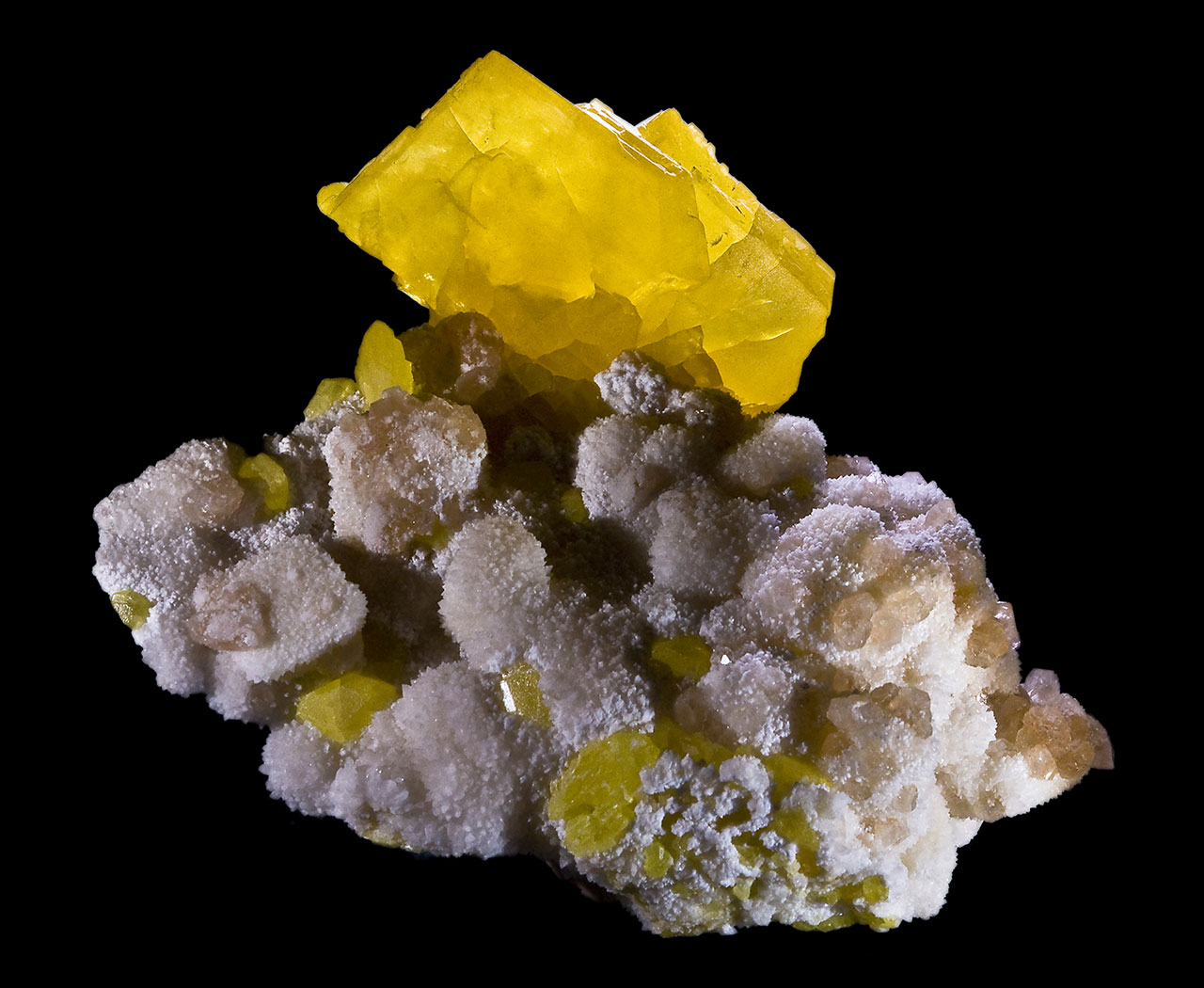 There are numerous localities within USA: Superb sulphur specimens, including large crystals up to 15 cm, were found in Maybee Quarry in Monroe Co., Michigan. Another famous locality is Steamboat Springs, Washoe Co., Nevada. The huge deposits in Texas and Lousiana produced only few crystalline specimens from boreholes. Sulphur is mined by the Frasch process, which means that sulphur rich layers are injected with hot water and molten sulphur is then pumped back to the surface. This mining method completely destroys all specimens.

Many volcanoes host volcanic vents producing native sulphur: Yellowstone NP in USA; Vesuvius and Etna in Italy; Popocatepetl in Mexico; Mutnovsky and Tolbachik in Kamchatka, Russia; Kawah Ijen volcano in Java, Indonesia and many others.

Interestingly, molten sulphur can form lakes on the sea floor around submarine volcanoes at big depths. The pressure of the water is so high, that the boiling point of water becomes higher than the melting point of sulphur. In such case sulphur does not precipitate into its solid form but remains in liquid state.