Anhydrite is a common mineral, widely found in desert environments. It is also found on the tops of salt domes piercing the younger sediments in oil-rich compressional mountain belts and in evaporite deposits.

Anhydrite is an anhydrous calcium sulfate (CaSO4). It is a member of the orthorhombic crystal system, exhibiting three directions of perfect cleavage coincident with the three planes of symmetry. Unexpectedly, it is not isomorphous with its mineral brothers: baryte (barium sulfate) and celestine (strontium sulfate). The unique molecular structure of anhydrite was not deduced until 1922, by X-ray diffraction. 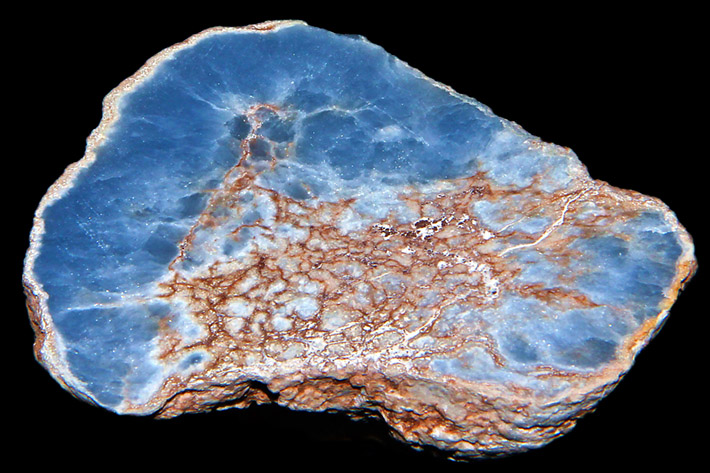 Anhydrite is colorless to pale blue. It tends to violet if transparent; impurities such as Fe or Mn will tint the mineral different colors: white, mauve, rose, pale brown or gray.

Anhydrite is translucent to transparent. Its luster is pearly on {010} or vitreous to greasy on {001), and vitreous on {100}. Its fracture is conchoidal, uneven or even splintery. Its hardness is 3.0-3.5, its streak white and its density is 2.97. 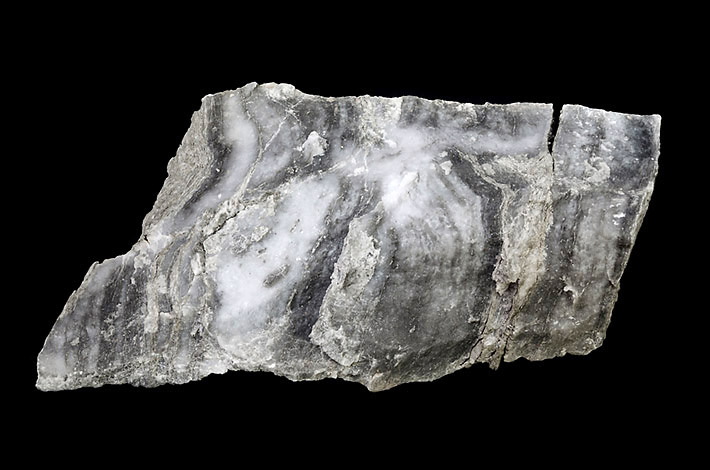 Anhydrite readily transforms to the more commonly occurring gypsum (CaSO4.2H2O) when exposed to water. This is a reversible transformation; gypsum will re-form anhydrite after heating to around 200 °C (400 °F) under normal atmospheric conditions.

The usual companions of anhydrite are calcite, halite (rock salt) and gypsum in evaporite settings, and the sulfides galena, chalcopyrite, molybdenite and pyrite in magmatic vein settings.

Anhydrite was first discovered in 1794 in the Hall salt mine near Innsbruck, Austria, and named then or shortly after by Abraham Gottlob Werner. The depth of the occurrence was critical to the discovery, because nearer the surface circulating ground water had altered the anhydrite to gypsum. 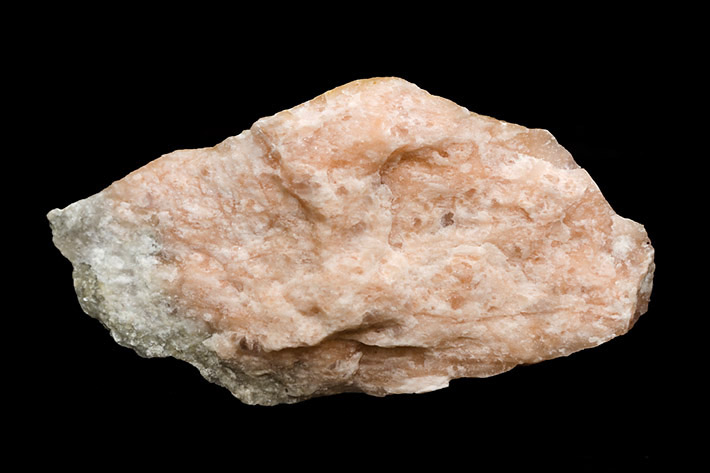 Werner is widely recognized as the father of German geology for his reputation as a master teacher at the influential Freiberg Mining Academy, his publication of the first modern book on descriptive mineralogy, and theoretician. His lasting chief accomplishment was the development of the theory of universal superposition and stratification - the idea that the visible rocks were the result of successive episodes of worldwide deposition of rocks of different composition.

Obsolete names are karstenite and muriacite, attributed to a belief that anhydrite was a variety of chloride.

Four principal types of anhydrite occurrence can be recognized:

Infrequently, anhydrite is a constituent of high-level intrusive or volcanic systems, occurring as an essential mineral, as vein and gangue material, or as part of zeolitic vugs and geodes in the rock fabric. These systems are characterized as highly oxidized water-bearing magmas (with or without economic copper content). Calcium-bearing hornblende is normally the dominant mafic mineral, with subsidiary anhydrite present, but there are instances where so much early anhydrite precipitates that no calcium is left available to form hornblende. 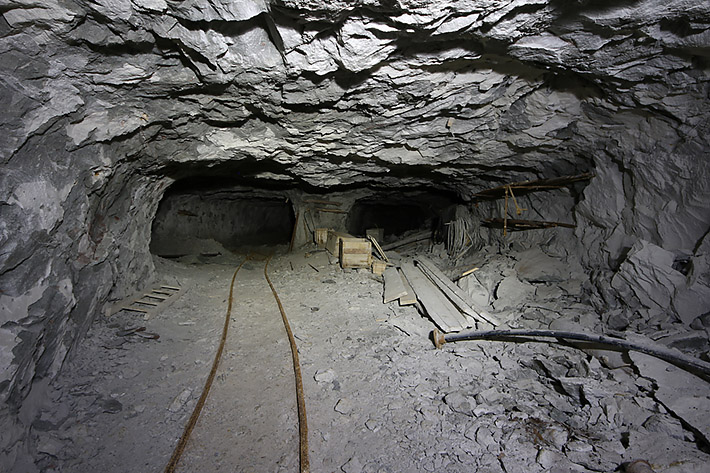 Worldwide, as evaporite deposits mixed with gypsum, representing the evaporation of massive amounts of seawater, or as salt basins, desert evaporate pans or shoreline tidal flats. In these settings, nodular anhydrite can also replace gypsum.

In deformed sedimentary mountain terrains laced with salt domes, where anhydrite forms part of a residual calcite-anhydrite cap above halite (salt) after much of the salt has been removed by groundwater.

Rarely, anhydrite is present in alpine veins in calcium-rich environment. It can form standalone crystals in the pockets or elongated crystals and needles inside the quartz crystals.

Anhydrite has a number of industrial uses, principally in agriculture, construction and chemistry.

In agriculture, anhydrite is a valuable source of calcium for soil treatment. It is superior to gypsum for two reasons: an equivalent mass of gypsum contains 21% less calcium because of its water content, and anhydrite is far more soluble in soils, providing quicker efficacy. 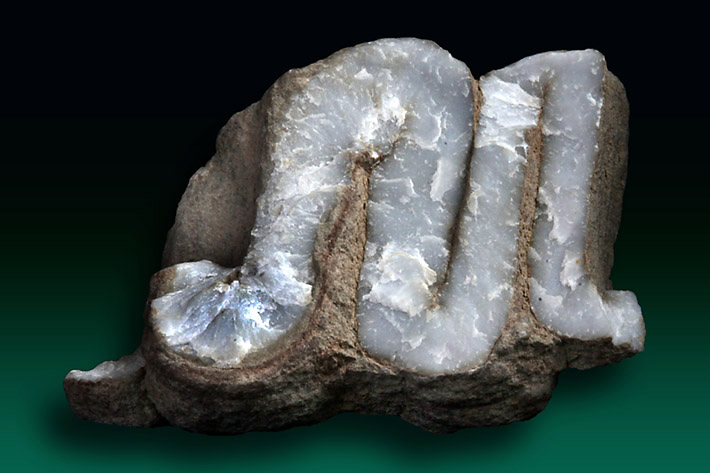 In construction, it is usually combined with gypsum to fabricate wallboard, joint compound (wallboard paste) and plaster. Used alone, it is used to manufacture cement, plaster and flooring and employed as a drying agent in paints, varnish and plaster.

In chemistry, it is a source of sulfur for the production of sulfuric acid.

Owing to its ease of synthesis, anhydrite has been created using several methods. In one, heating an aqueous solution of gypsum with excess sodium or potassium chloride will produce anhydrite if the solution is heated above 40 °C. In another, fluorite and sulfuric acid are combined to produce hydrofluoric acid. The byproduct of 1 ton of HF is 3.5 tons of anhydrite, which is subsequently kiln-dried and employed as a feedstock for the various products cited above. 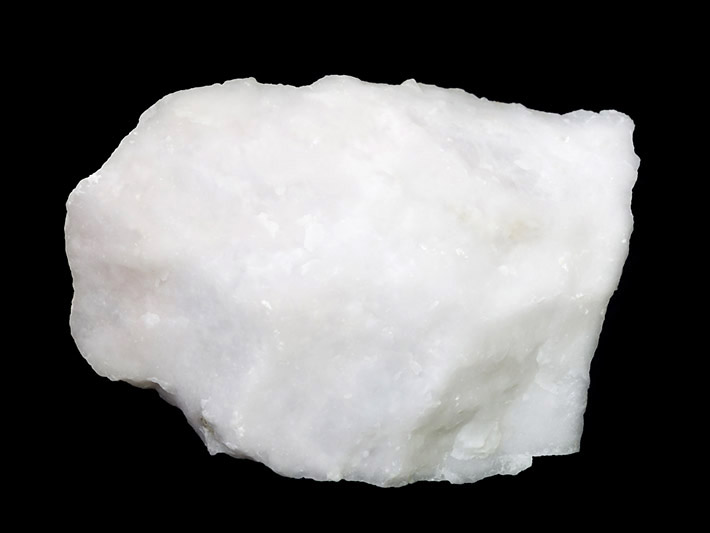 Anhydrite as a Collectible

Anhydrite specimens are vulnerable to degenerating to gypsum if not protected against moisture for a period of time. Anhydrite needs to be stored with silica gel in a dry area. It is an unfortunate fact that some specimens recycled from old collections may actually be gypsum descendants of anhydrite that inverted due to improper care.

Uncommonly, anhydrite has been found in some igneous rocks, for example the principal diorite intrusive pluton at El Teniente, Chile; in the trachyandesite pumice of the 1982 eruption of El Chichón Volcano in Mexico; and in the 1991 eruption of Mt. Pinatubo in the Philippines.

More commonly, anhydrite occurs in tidal flats in desiccated shoreline environments of the world, and notably in the caprock of salt domes. The well-known areas with abundant salt domes are Gulf of Texas and Persian Gulf.

The Naica Mine at Naica in Chihuahua, Mexico, about 230 miles south of El Paso, Texas supplies the most spectacular examples at present. The Naica Mine produced 40 million tons of lead and zinc ore, and minor silver, copper and gold, starting in 1794. 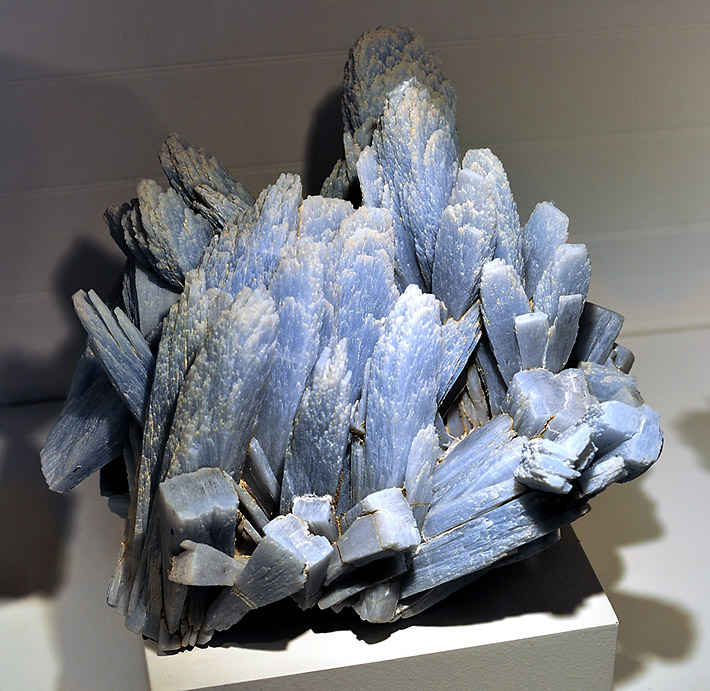 An intrusion between 40 and 25 million years ago introduced sulfide minerals into, and dissolved parts of, a Cretaceous limestone. The voids so created allowed the growth of well-developed crystals of fluorite and pyrite, which were first noted in the 1970s.

Naica is somewhat unusual in that there is an apparent time-dependent vertical transition in mineralogy. Researchers have speculated that the original mineralizing activity, dating to 26 million years, created a large cavern filled with anhydrite deposited at temperatures over 58 °C. Over time, as the rock cooled, the anhydrite broke down and converted to gypsum, which grew to immense dimensions, with crystals seemingly growing out of the floor and reaching lengths of 11 m (36 feet) and widths of 1.2 m (4 feet). These are the largest freestanding crystals ever found.

Anhydrite specimens are also collected at a variety of other locales, most of which appear to be igneous-related, except for evaporites in New Mexico and salt domes in Texas.

In Austria, from Hall, Tirol, at Bad Ischl; Hallein, Salzburg; and Aussee, Styria. In Germany, in Saxony-Anhalt; from Stassfurt-Leopoldshall and Douglashall, near Westeregeln; and at Wathlingen, near Celle, Lower Saxony. In Switzerland, from the Simplon Tunnel, Valais. In Italy, from the Campiano mine in Tuscany; and on Vesuvius, Campania. 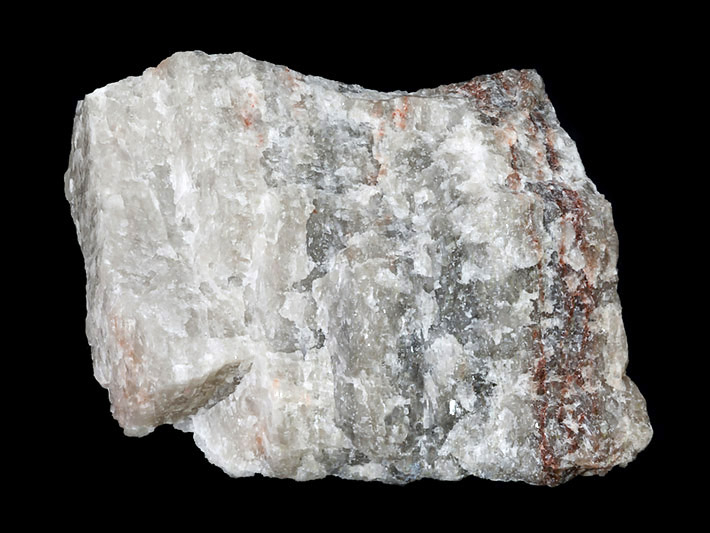 In Canada, at the Faraday Mine, Bancroft, Ontario. In Chile, at the El Teniente Mine. In Peru, at Morococha. In the Philippines, on Mt. Pinatubo. In India, at the Salt Range, Punjab.