Molybdenite is the principal ore mineral of molybdenum and rhenium. It occurs widely in igneous and metamorphic rocks generated under high temperature conditions. Despite its lack of popularity and rare crystal forms, it is a very interesting and important industrial mineral.

Molybdenite is a simple sulfide - MoS2. It is a member of the hexagonal crystal system in its most common form (molybdenite-2H), and of the tetragonal system in a less common polymorph (molybdenite-3R). 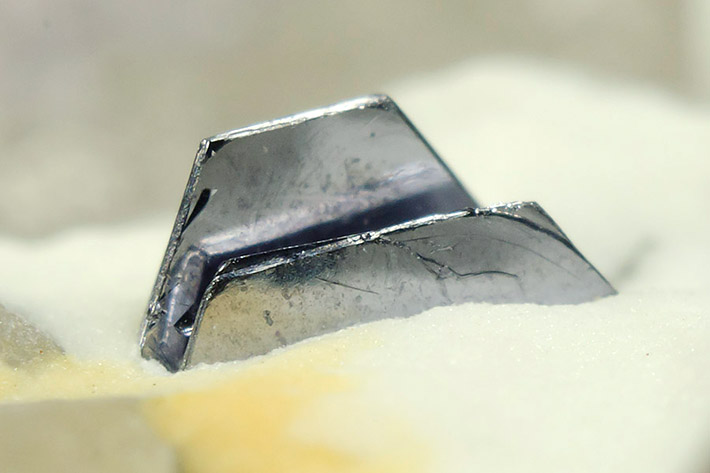 Molybdenite is unusual in possessing a layered structure that produces a lubricating effect: the mineral contains a sheet of molybdenum atoms sandwiched between two layers of sulfur atoms. The S-Mo-S bonding within the sandwich is strong, but bonding between adjacent layers of sulfur atoms is so weak that the layers not only slide with perfect cleavage, but flex.

The molybdenum in molybdenite is frequently replaced by rhenium, an element that appears in small quantities ranging from parts per million (ppm) to 1 to 2 %. Elevated rhenium content is detectable by X-ray diffraction, and its presence allows moly ore to do double duty as an ore of rhenium. When present, the radioactive isotope Rhenium-187 and its daughter, Osmium-187, permit the geochronologic dating of the molybdenum mineralization.

Molybdenite typically occurs as thin, platy hexagonal crystals slightly dished in the center. Because of its platy character, the terms micaceous, foliated and scaly apply equally well. The internal sandwich arrangement of S-Mo-S layers also promotes a slipperiness that observers detect as greasy, and a flexibility that allows crystals to be bent out of shape. Molybdenite is so soft that it does not fracture, but peels as a sectile mineral under the blade of a knife.

The color of molybdenite lacks substantial variation, ranging from silver to silver-gray to bluish-gray to black. Its luster is uniformly metallic. Molybdenite has an unusually low hardness (1.0 to 1.5, comparable to talc), with a streak (bluish-gray to grayish to grayish-black) as monotonous as its natural color, and a density of 4.6-5.1. By weight, molybdenite is 59.94 % Mo and 40.06 % S. 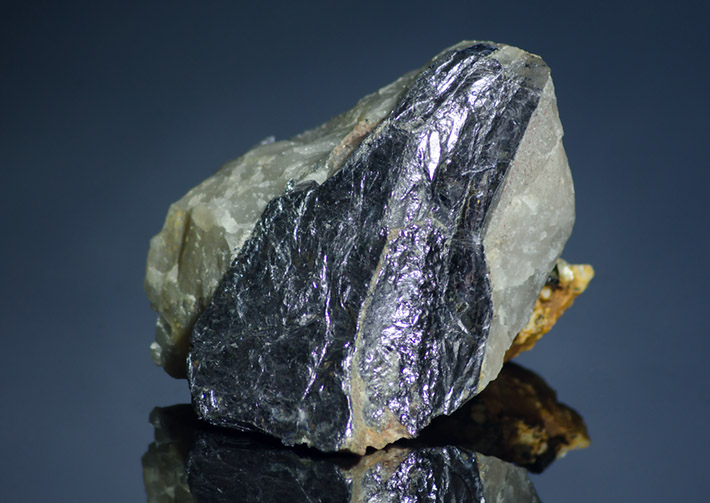 The confusion of graphite with molybdenite was a lingering issue for centuries because of their superficial similarities. Before the advent of modern scientific testing, shared characteristics were softness, greasiness and writability. Their densities were different, but this was not an attribute easily measured, given the forms in which they usually occur (not usually in massive, isolated specimens).

The Greek term molybdos (lead) was applied to the mineral in pre-Roman times, and was thought to be graphite or a lead ore. Roman authorities Dioscorides and Pliny the Elder, as well as medievals such as Georgius Agricola, all used the term interchangeably to refer to molybdenum (lead) and graphite. Not until the mid-18th century was molybdenite described as an authentic mineral in its own right, and the element molybdenum was not isolated until 1781. Three years earlier, Carl Wilhelm Scheele (for whom scheelite, CaWO4, is named) successfully distinguished molybdenite from graphite for the first time by demonstrating the solubility of molybdenite in acid, and the inactivity of graphite.

All important molybdenum deposits are related to magmatism. The main two types of deposits are greisens and porphyry deposits.

Greisen deposits are usually formed within a continental crust and related to the fertile S-type granites. The interesting minerals - including molybdenite - are concentrated within an uppermost part of the granite intrusion. Ore minerals - typically represented by molybdenite, cassiterite and wolframite - are either disseminated in both granite and surrounding country rocks along the top of the intrusion, or crystallized in the quartz-ore veins and stocks spreading up from the granite intrusion. 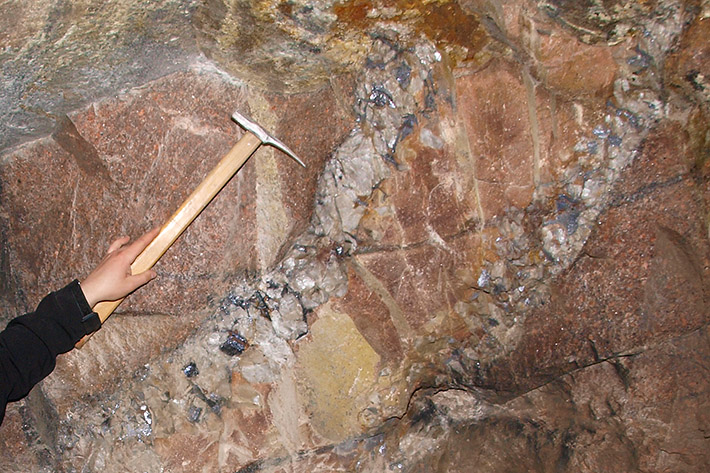 Porphyry type deposits are mostly related to subduction zones with calc-alkaline intrusions. The large, water-rich plutons generated by melting in the mid-level crust have risen in the crust (down a P-T gradient) to the point where the magma becomes oversaturated with respect to the water it can retain. Mineralized fluids are released and precipitate ore within and beyond the core of the intrusion. Ore is either disseminated within a rock (typical low-grade porhypry type ore), or less often forms quartz-ore veins and stocks. Unlike greisens, porphyry deposits are typically very large. Molybdenum is recovered overwhelmingly from either moly-only porphyry deposits, or as a byproduct of porphyry copper production.

Molybdenite also fills the fissures in the certain types of granites. Molybdenite is also present in some pegmatites, often related to Mo-rich intrusive rocks.

Although molybdenum is relatively rare in the Earth's crust, it is common and well-expressed as molybdenite and amenable to easy industrial processing. The basic process is to separate the molybdenite by froth flotation, oxidize it to form ammonium molybdate, and the recover the molybdenum metal by reduction. The pure metal finds its highest value as an alloy for creating high-strength and corrosion-resistant steel. The pure metal can also be employed as an industrial catalyst, as fertilizer, and as battery electrodes. 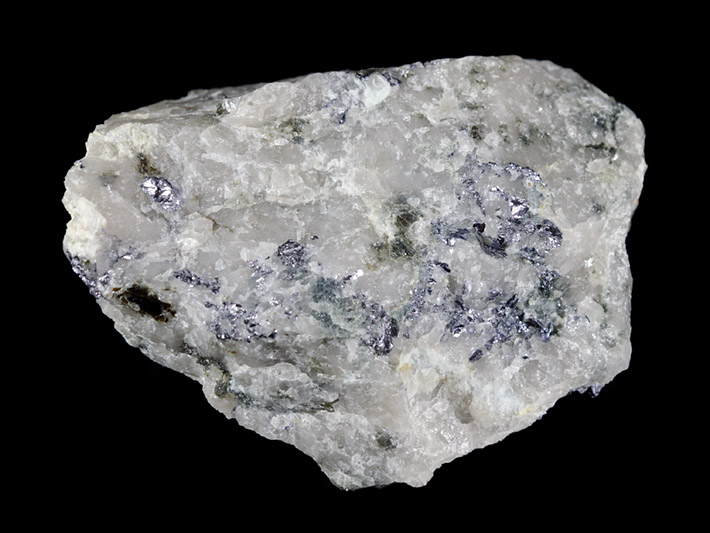 Early in the 20th century, the raw mineral - MoS2 - was put to use as semiconductors (aka cat's whiskers) in primitive crystal radios. Current research into molybdenite properties suggests that the mineral may be serviceable as small or low-voltage transistors. Since the transistors can detect and emit light, they may find applications in optical electronics. On a more prosaic level, the raw mineral is well known to car drivers as the principal component of grease guns used to lubricate automotive fittings, especially the zerks or lubrication points found in suspension systems (tie rods, ball joints and steering knuckles), as well as driveline, U-joint and pinion gear assemblies.

Molybdenite is not very popular collecting material as it lacks the aesthetics and rarely forms nice crystals. The specimen market for molybdenite thus appears to be quite thin. 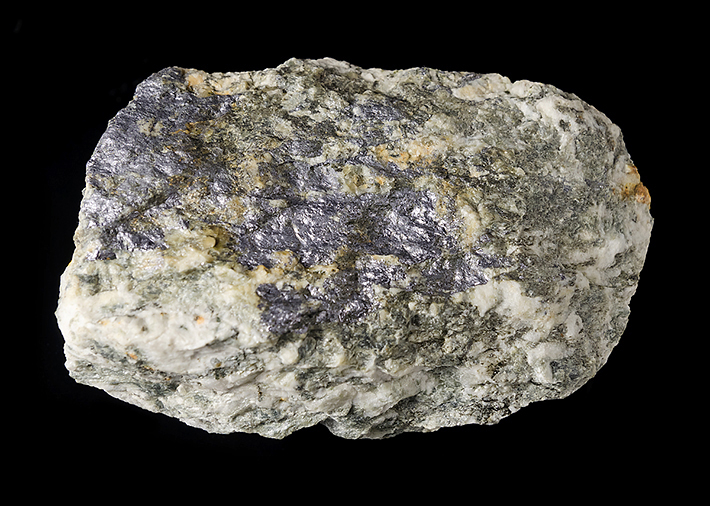 The principal porphyry deposit sites have been the Rocky Mountain Cordillera in west-central North America (including British Columbia, Idaho, Arizona, New Mexico, Utah and Colorado), and the Andean Mountain chain on the eastern rim of the Pacific Ocean (including Chile, Peru and Mexico).

North American porphyry deposits include Pebble Mine in Alaska; Morenci, Lavender Pit, Ajo, Safford Mine, Ray Mine and Resolution Copper in Arizona; Bingham in Utah and Ely in Nevada. South America also hosts numerous huge deposits: El Teniente, Escondida, Chuquicamata and Collahuasi in Chile and Toquepala and Cerro Verde in Peru. North Park and Cadies are located in NSW, Australia. Other deposits include Ok Tedi and Panguna in Papua New Guinea, Dizon in Philippines and Batu Hijau and Grasberg in Indonesia. The richest porphyry deposit worldwide might be the newly opened Oyu Tolgoi in Mongolia. 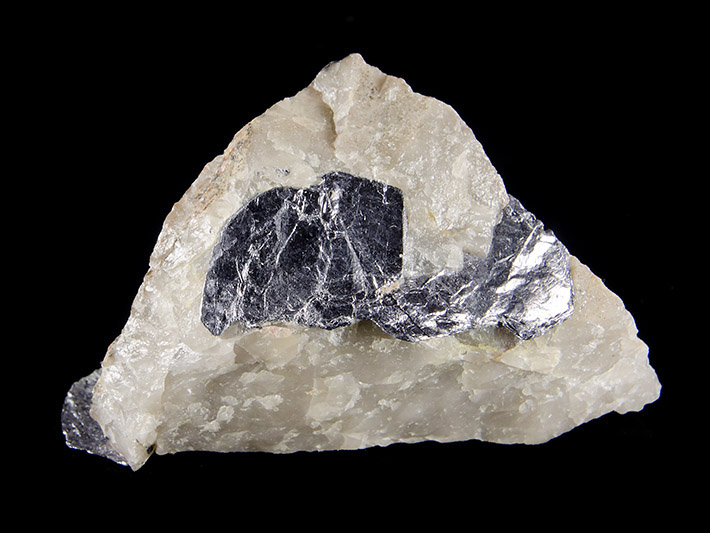 Classic greisen deposits include Cligga Head in Cornwall, England; Altenberg in Germany, Krupka and Horni Slavkov, Czech Republic and Panasqueira in Portugal. Other sites include Ardlethan and Timbarra in Australia, Anchor Mine in Tasmania, Pitinga in Brazil, Lost River in Alaska and Sisson Brook and Burnt Hill in Canada.