Scheelite is a calcium tungstate mineral that is the dominant member of a solid solution series between tungsten-rich scheelite (CaWO4) and rare molybdenum-rich powellite (CaMoO4), a much less common variant. This solid solution explains why most scheelites contain certain amount of molybdenum in their structure. 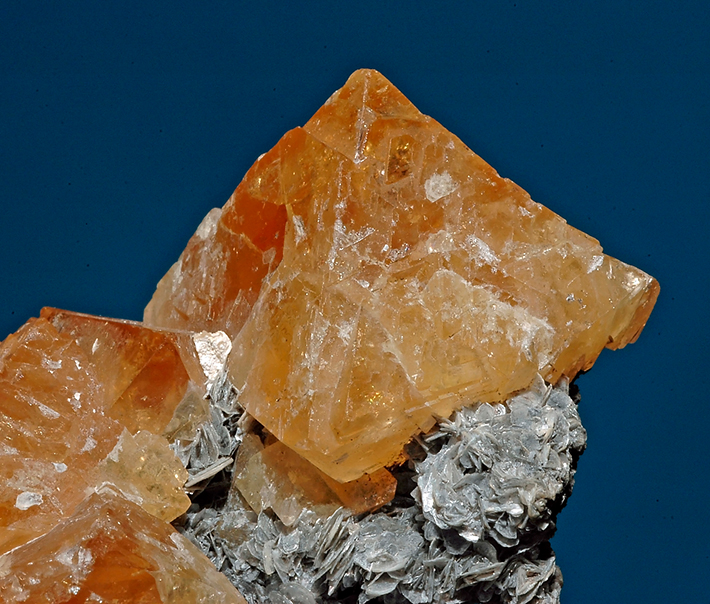 Scheelite crystallizes in the tetragonal system, often forming as tetragonal dipyramids which look like octahedrons. Additionally, it may be tabular, massive, granular or columnar, sometimes as grainy aggregates. (A druzy variety is only known from one locality at Cinovec/Zinnwald, in the Czech Republic). Commonly, crystals will exhibit triangular growth layers and twinning, and crystal faces may be striated.

Scheelite encompasses a broad range of colors, from bright orange, golden yellow, yellow-brown, brownish green to dark brown, pinkish to reddish gray, orange, pale gray, white and colorless. Transparent varieties are notoriously difficult to prepare as gemstones because of their fragility. Scheelite fluoresces sky-blue to bluish white under short-wave UV light. Any trace content of molybdenum is likely to shift the fluorescence into the green. 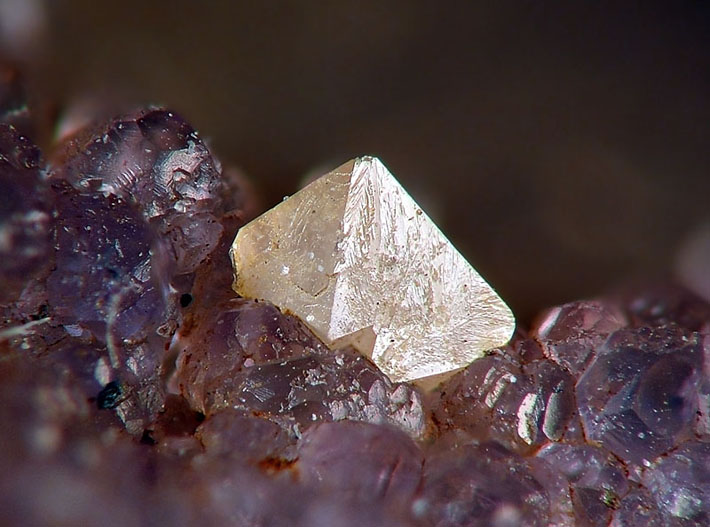 The luster on crystal faces is decidedly lustrous, but degrades to adamantine or greasy on other surfaces. Cleavage is distinct on {101}, interrupted on {112}, and indistinct on {001}. Fracture is subconchoidal to uneven. Its hardness is 4.5-5.0, with a white to yellow streak and an elevated density of 5.9-6.1, owing to the tungsten content.

Unfortunately, scheelite in grains or masses is usually white, grayish or colorless and lacks cleavage. It is almost impossible to distinguish it from quartz. Even worse, scheelite is often intergrown with quartz. The only way to detect scheelite is to use the short-wave UV light, as the typical fluorescence immediately reveals the presence of scheelite.

Powellite produces a solid solution with scheelite and can be quite similar-looking. Unlike scheelite, it usually fluoresces yellow and not white/blue. It might be quite difficult to distinguish these two without analyses, but powellite is extremely rare compared to scheelite.

No discussion of scheelite would be complete without addressing the issue of synthetics.

It has been theoretically possible to create synthetic metal crystals since 1916, when a Polish scientist, Jan Czochralski, discovered that he could nucleate a single crystal of tin from a seed dipped in a molten solution of the metal. The Czochralski process has been definitively used to create scheelite substitutes in several fields, some related to technology (discussed in Applications), and some related to gemology. 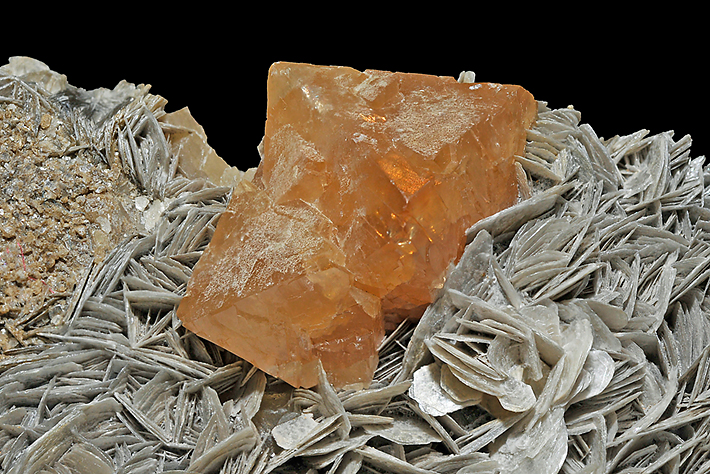 Fortunately, gemologists have two tools at their disposal to distinguish between the natural and synthetic scheelite.

Under the spectroscope, the absorption spectra will be different. Natural scheelite, containing trace amounts of praseodymium and neodymium, will contain faint absorption lines in the yellow (585 nm) portion of the spectrum; synthetic scheelite will not. Attempts to doctor synthetics by doping the crystal with praseodymium and neodymium will fail, because the absorption lines of a doped sample bear no resemblance to the natural spectrum display.

Scheelite was first recognized in 1781 at the Mount Bispbergs site in Dalarna, Sweden. The heavy weight of the ore sample originally led Swedes to name it tungsten, meaning heavy stone. Later, Carl Wilhelm Scheele (1742-1786), a pharmaceutical chemist, was credited with discovering the tungsten metal within the mineral sample, and the metal element itself was renamed tungsten, and mineral sample name was changed to scheelite in his honor. 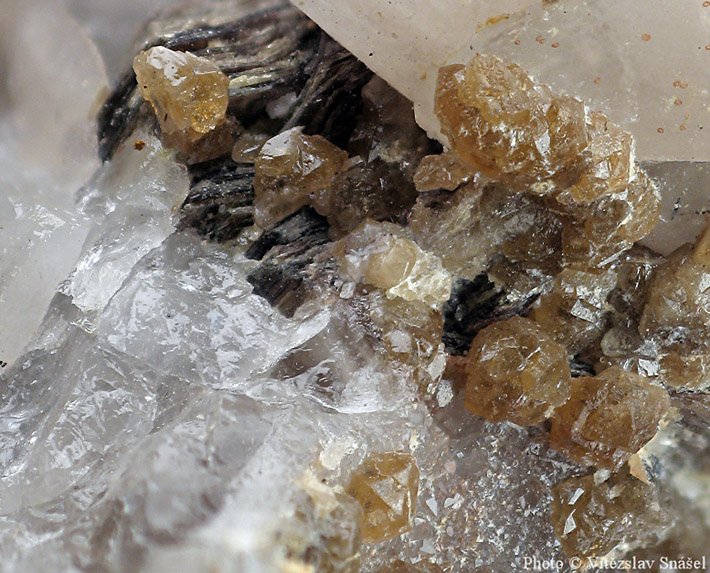 Scheelite is a mineral most closely associated with high-temperature veins, greisens, granites and various types of skarns. High-temperature veins and greisens are often closely associated with tungsten-bearing granites, where they form in the uppermost part of the granite or spread from it into host rock. These deposits typically contain wolframite, cassiterite, scheelite, molybdenite, fluorite, and zinnwaldite. Common associated gangue minerals are quartz, topaz and feldspars. Many other minerals can be present, including beryl, fluorapatite, arsenopyrite, chalcopyrite, various micas and wide range of secondary minerals. Scheelite can be both primary mineral, formed by magmatic processes, and secondary mineral, which forms by metasomatic processes and replaces wolframite. Also pseudomorphs of wolframite after scheelite are known, they are sometimes labelled as reinite. 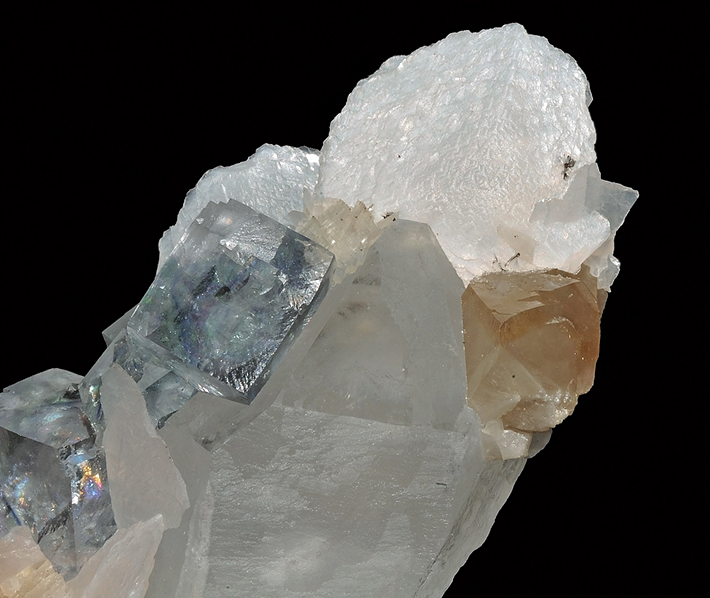 Scheelite is also present in many types of skarns. Some of these are formed by metasomatic processes in the environment rich in calcium and tungsten. Some are formed by regional metamorphosis from volcano-sedimentary sea bed material or by contact metamorphosis when hot granite magma (rich in tungsten) is injected in calcium rich rocks, typically limestones or marbles. 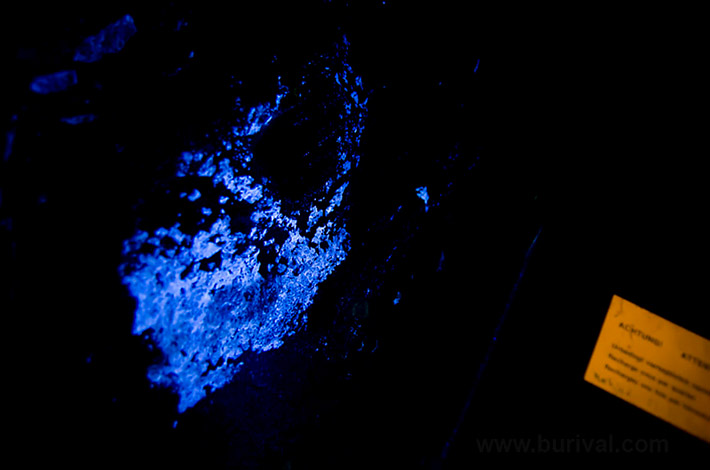 Chronologically, its development as a sole element (used by itself) followed two principal trajectories, one dedicated to use as a filament in electrical lighting (1904), and one dedicated to widespread uses for a malleable hardened metal (1920s). An industrial breakthrough - combining and compressing tungsten and carbon into a super hard tungsten carbide powder - forever increased the usefulness of tungsten.

From about 1860 to 1904, experimentation in electric lighting depended on passing a current through a carbon filament to generate incandescent light (and byproduct heat). Carbon filaments were typically mounted in vacuum-based glass bulbs, or in bulbs filled with an inert gas. All such attempts created products with inherent limitations, including bulb blackening, weak illumination, gradual deterioration of the filament and limited life. 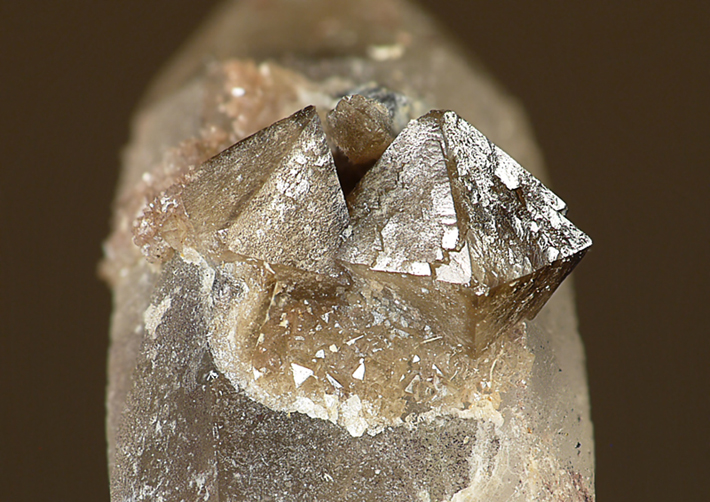 A Hungarian patent for a tungsten filament issued in December, 1904 marked the beginning of a revolution in lighting design. In 1913, vacuum-bulb construction was fully replaced by contained inert gases, dramatically reducing bulb blackening, and increasing temperatures, illumination, and bulb life.

Tungsten carbide (WC) is a high-value industrial product owing to its resistance to scratches, rust and pitting; it is impervious to attack by nitric, hydrofluoric and sulfuric acid. It is the hardest alloy, with the highest tensile strength at high temperature, a low coefficient of thermal expansion, a high melting point (3410 oC), a high boiling point (5,700 oC) and a Mohs hardness of 9. 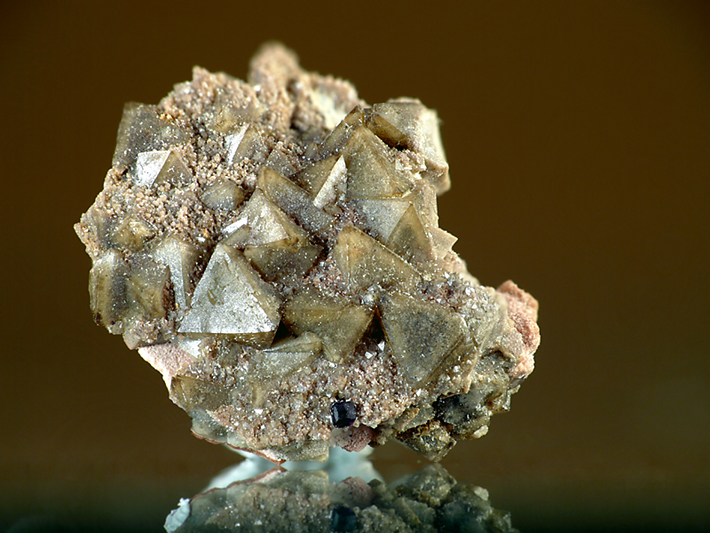 About 90% of the production of tungsten carbide is devoted to an enormous variety of industrial uses. Among them:

Machine tools made of tungsten carbide are superior, especially when mounted as a particle aggregate in a matrix of cobalt. They are more durable, maintain a better cutting edge, produce a better finish on parts and operate faster because of their temperature resistance. It is a common component of high-speed drill bits. 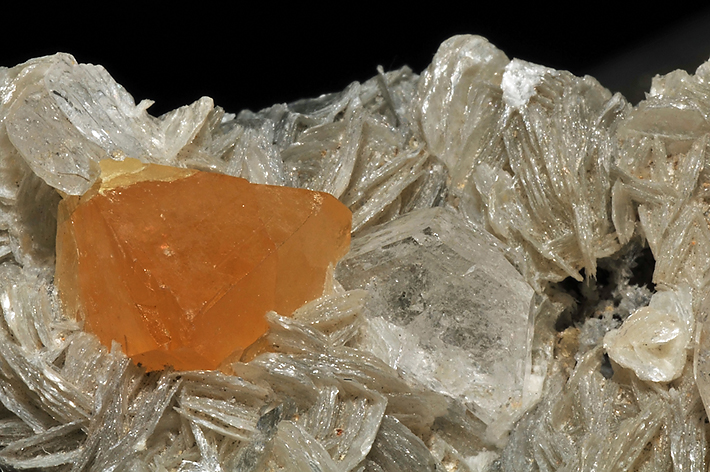 Mining is a natural home for carbide applications, where durability and resistance to abrasion are necessary. Principal tools are down-hole pneumatic hammers, button bits (carbide buttons in a softer steel matrix), tunnel-boring machines, and any other application requiring the ability to cut rock quickly.

Industrial alloys are used in combination with other metals (nickel, iron, silver and copper) to fabricate materials for the construction, electronics and aeronautical industries. Some of these applications are as inert-gas welding rods, windings and heating elements for electric furnaces, magnets, electroplating, high-temperature coatings, and rocket nozzles. 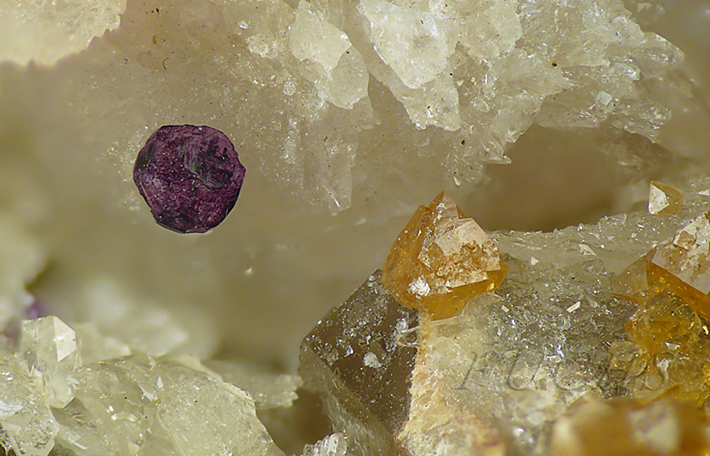 Mill products are metallic pieces used as wheels, rods and impact materials suitable for reducing the size of a starting material to any size desired, from coarse fragments to a fine powder.

Jewelry applications account for a tiny fraction of total production, and are concentrated in the wedding industry. The advantages of tungsten in engagement rings and wedding bands are obvious: tungsten rings are scratch-resistant and hypoallergenic, but there are two obvious downsides: tungsten rings cannot be resized, and extreme hardness can also make the ring prone to shattering, and difficult to remove in a medical emergency (where a hand injury creates finger swelling). 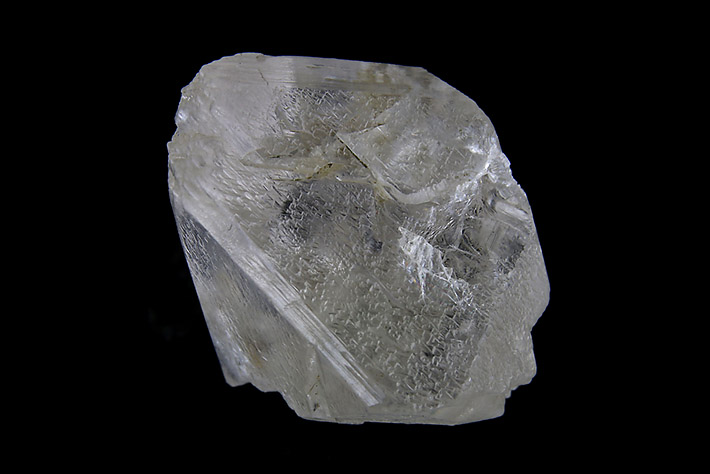 Ammunition for small-bore applications is another favored use. In land warfare, the carbide is deployed as an anti-tank or anti-armored personnel carrier projectile owing to its hardness and high density.

Sports applications are limited to situations where a sports implement will repeatedly strike a hard surface, such as a trekking pole (on hard rock), dart tips and golf-club heads.

Automotive applications are primarily limited to studs inserted in passenger car tire treads for better traction on snow and ice. Although legal in many countries, most US jurisdictions limit their use to winter driving only. As a result, few areas of the US still use them in any quantity, since tire manufacturers have designed aggressive winter tread patterns as successful replacements. 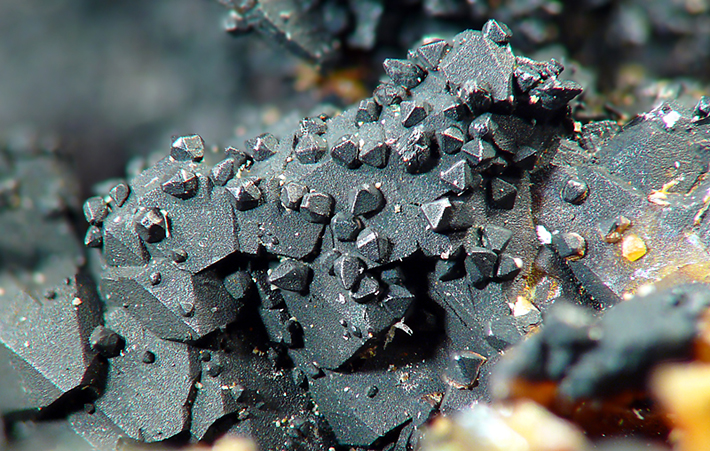 Nuclear applications are centered on the ability of tungsten carbide to reflect neutrons in atomic research. Famously, two gruesome accidents occurred during nuclear bomb development in WWII Los Alamos/Manhattan Project experiments when neutrons emitted by plutonium were accidentally reflected uncontrollably, and caused the handlers to be fatally irradiated.

Office Supplies: The roller-ball tip in your ball-point pen is likely to be a tungsten carbide product. 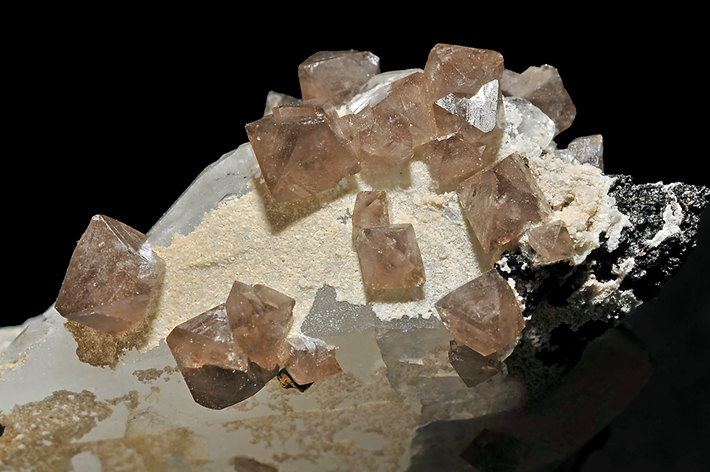 Electronics applications is an area where synthetics are widely used. They include items like fine-wire filaments, electrical contact points and switches, heat sinks, electrochemical coatings, X-ray targets, reinforcing substrates for composites made of metal, ceramics and plastic, scintillators which exploit the property of luminescence (reflecting the energy of incoming ionizing radiation), and solid-state lasers.

By far, the most prized specimens are attributed to two mines in China and an old property in the US state of Connecticut. 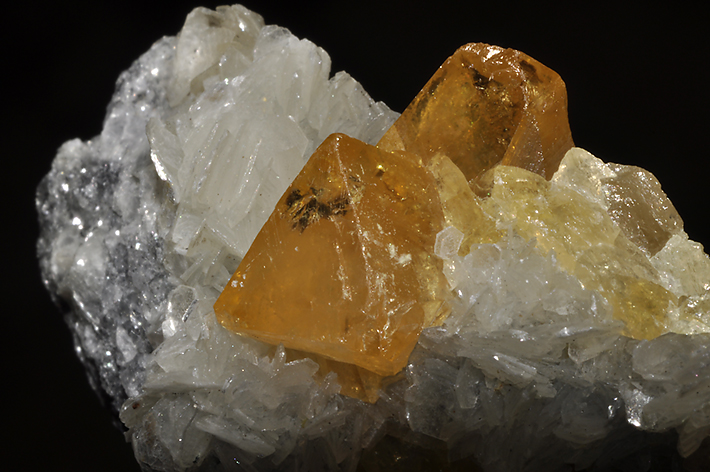 Large crystals of scheelite completely altered to wolframite have been found at Mounts Kinpu and Kinpo on the boundary between, Nagano and Yamanashi Prefectures, Japan. 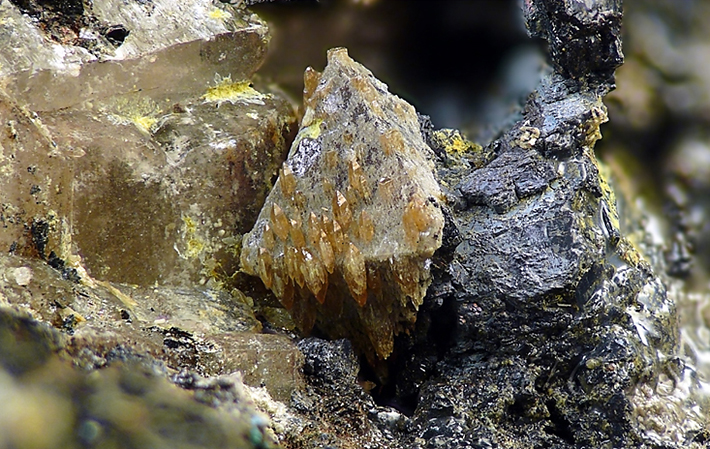 Scheelite was mined until 1990 at King Island, Tasmania. Samples were documented at Glenorchy, Central Otago; at Macraes Flat, North Otago; and at Golden Bar Mine, Dead Horse Creek, Nelson in New Zealand. 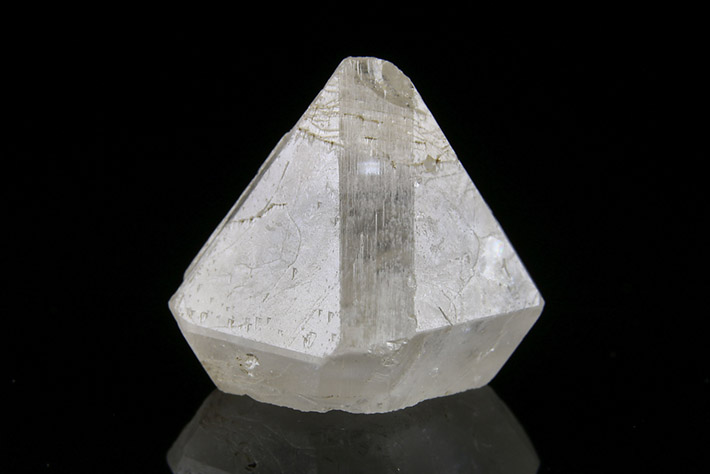 Scheelite is mined in the Mittersil, Hohe Tauern, Austria. Only preliminary work was done in Kristina Mine, Kasperske Hory, Czech Republic.

Bright orange, sharp crystals, resembling those of Pingwu (China), have been found at Gharmung, in the Skardu District, Pakistan. 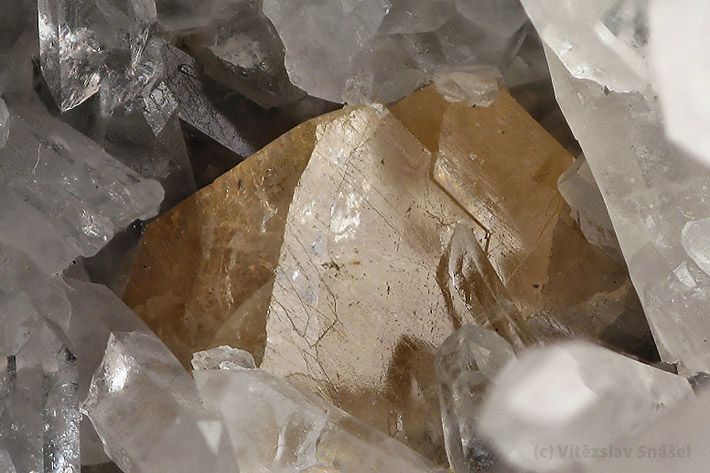 There are many productive sites in the USA: Brownish-orange floater crystals of scheelite were found in the Dragoon Mountains at the Cohen Mine, Cochise County, Arizona. Unique white and colorless crystals once came from the Greenhorn Mountains, Kern County, California. Brown, smoky crystals came from Camp Bird Mine, Ouray, Ouray County, Colorado. White to light yellow scheelite was found in Trumbull, Fairfield County, Connecticut. The crystals are large, and many are completely altered to wolframite (reinite).

There is a high concentration of scheelite in northeast Brazil, mainly in the Currais Novo Mine in Rio Grande do Norte State. A deep-orange scheelite came from the Morro Velho Mine, Nova Lima, Minas Gerais, Brazil. Extremely large crystals were found in the Turmalina Mine, Piura, Peru.