Chalcopyrite is the most important copper ore, and it is the primary source of many popular secondary copper minerals. It can occur in a variety of environments and forms, from hydrothermal veins to sedimentary layers. Nice chalcopyrite crystals are highly sought after by collectors.

Chalcopyrite's chemical formula is CuFeS2, or copper iron sulfide. Chalcopyrite may contain significant amount of selenium and tellurium. It features a tetragonal crystal system, which means that its crystals have three axes. Two of these axes have equal lengths to each other, and the third can be longer or shorter, but must be at a 90-degree angle to the equal two axes. Chalcopyrite is isostructural with sphalerite, but its unit cells are very different in size. Substitution of Cu for Fe is very limited, also some other metals like Bi, Co, Ni, Ag and Cd might enter the structure in small amounts.

The crystals of chalcopyrite may look like tetrahedrons or octahedrons, but it is their lack of symmetry which makes them slightly deformed. Crystals are often twinned and many crystals are striated, which means that the crystal faces are lined with parallel grooves that resemble straight lines drawn onto the stone.

The color of chalcopyrite falls mostly into the yellow range, and can be anywhere from brassy to golden. It may also appear as very dark brown to almost black, depending on the specimen. Chalcopyrite is known to tarnish, and when it does, it looks blue, red, purple, or any combination of these colors. This tarnishing does not often occur in nature, although it can - such specimens are called peacock ore. However, many highly iridescent specimens of chalcopyrite have been treated with chemicals to produce these colors. 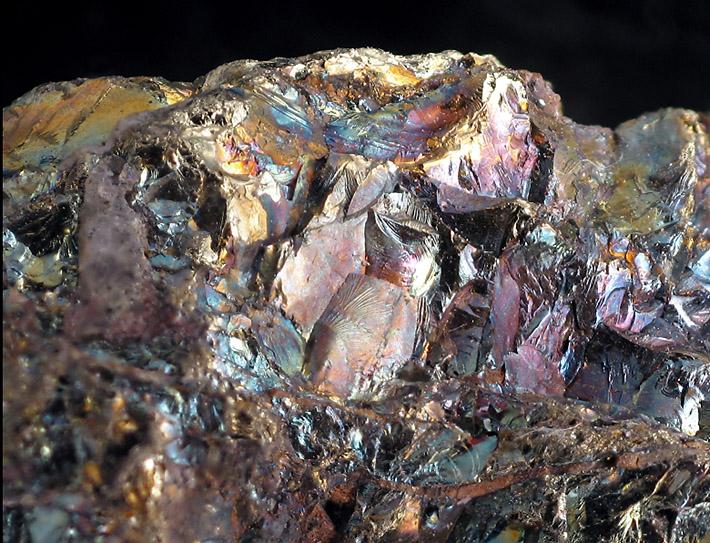 Chalcopyrite has an opaque transparency, meaning that no light can pass through it. It features a metallic luster. This quality leads to its frequent confusion with gold or pyrite. It has no discernible cleavage to speak of, and has a very low hardness level of 3.5-4. It presents black streaking.

Chalcopyrite is very common. It may be found in copper deposits where sulfide zones have formed. It is also found in mesothermal veins (where intense heat is present) and hypothermal veins (where high temperatures and extreme depths combine). Nice crystals of chalcopyrite are often associated with quartz and other sulfides like pyrite, sphalerite, tetrahedrite and galena. They can form very aesthetic clusters inside hydrothermal veins. 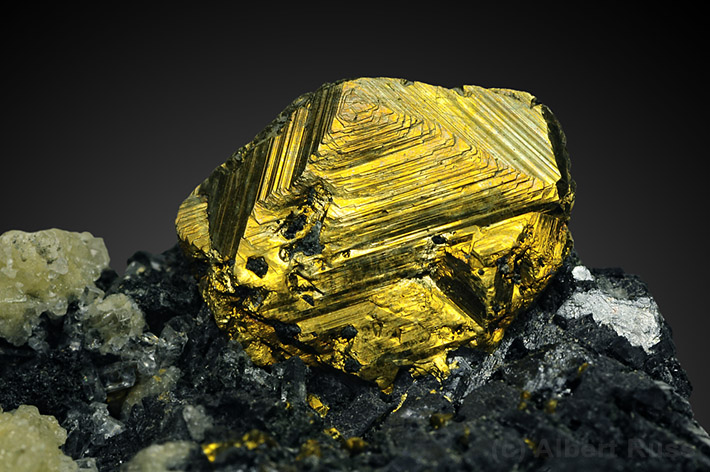 Chalcopyrite can be also found in metamorphic rocks, in hydrothermal replacement deposits, and in dikes and intrusions present in igneous rock. Economically, the most important are porphyry deposits like the ones found in Bingham, Utah, or Oyu Tolgoi in Mongolia, where the ore is often disseminated in granitic rocks in huge lower grade ore bodies.

Chalcopyrite is a primary source of many popular secondary copper minerals like azurite, malachite, chrysocolla, native copper and dozens of carbonates, sulfates, arsenates and phosphates. Many famous localities of such minerals like Bisbee in Arizona, Chiquicamata in Chile, Bou Bekker and Kerrouchen in Morroco, and Spania Dolina and Lubietova in Slovakia, were in fact copper mines with a significant amount of chalcopyrite. 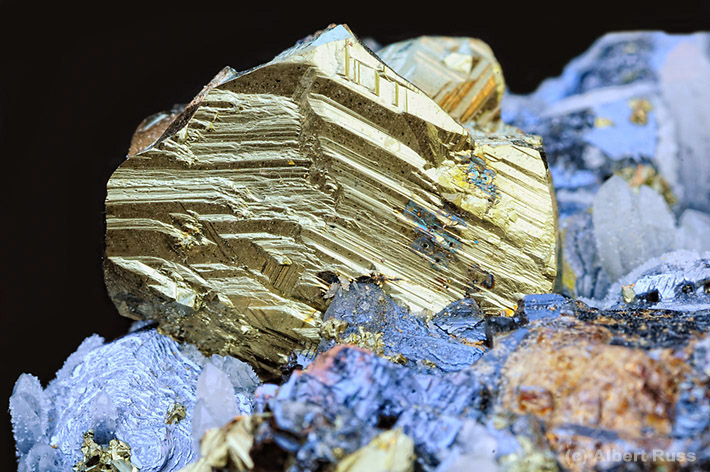 Chalcopyrite may be found in veins surrounding copper deposits in Broken Hill, a mining area in New South Wales, Australia. It is also found in similar occurrences all along the American Cordillera mountain chain, spanning an area from Alaska to Tierra Del Fuego in South America. It is present in massive deposits in Ontario, Canada, and in the enormous copper mine known as the Olympic Dam in South Australia.

Although it can be found in all of these places in abundance, the best quality chalcopyrite can be found in Cavnic in Romania, Madan in Bulgaria, Banska Stiavnica in Slovakia, Trepca in Kosovo and in many sites in Germany, China, Peru, and Mexico. Excellent crystals up to 12 cm in size come from Dalnegorsk, Russia. Other quality specimens come from Kansas, Oklahoma, and Missouri, where some naturally blue iridescent chalcopyrite has been mined. Pennsylvania is also a known location for naturally tarnished chalcopyrite crystals.