Sphalerite is common, but it does not often show up in casual collections of minerals, despite its occurrence in several different colors. This is perhaps because sphalerite is most commonly found in black or dark gray due to the frequent presence of iron impurities in its makeup.

Sphalerite has been previously called blende or later zinc blende. Its name is from the Greek word sphaleros, which means treacherous. It is often associated with galena, but it produces no lead. Ancient miners did not like finding sphalerite in their ore.

The sphalerite chemical formula is ZnS (zinc sulfide.) This chemical formula represents sphalerite in its pure form, but it is much more commonly found with significant amount of other elements substituting zinc. Up to 26 % Fe, 17 % Cd, 15 % Hg, 21 % Mn and small amounts of Cu, In, Ga, Ge and As may replace the zinc. These elements substituting for zinc can cause variable colors in sphalerite.

Sphalerite is isometric with exactly the same structure as diamond. Of course, the structure consists of regularly distributed Zn and S instead of carbon. Sphalerite forms twinned crystals in large groups with terahedral shapes. Octahedral crystals, distorted cubic crystals and dodecahedral crystals may also be found, as well as grainy, stalactitic, botryoidal, and massive growths. The hexagonal polymorph of ZnS is wurtzite, which is quite rare.

Because of the frequency of inclusions and impurities in sphalerite, it is rarely found in its purest form. Pure sphalerite has a white streak, but with impurities it usually streaks brown. This mineral is not very hard, registering at 3.9 to 4.1 on the Mohs scale of hardness, and it is brittle. It features a metallic or sub-metallic luster, and may also be resinous or adamantine. It can be black, gray, brown, green, red, yellow, or orange, but it is almost never colorless. When brown, it is usually banded and globular in nature. 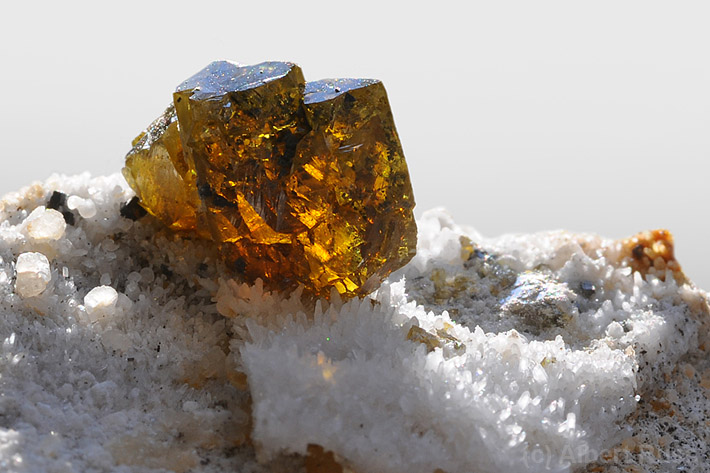 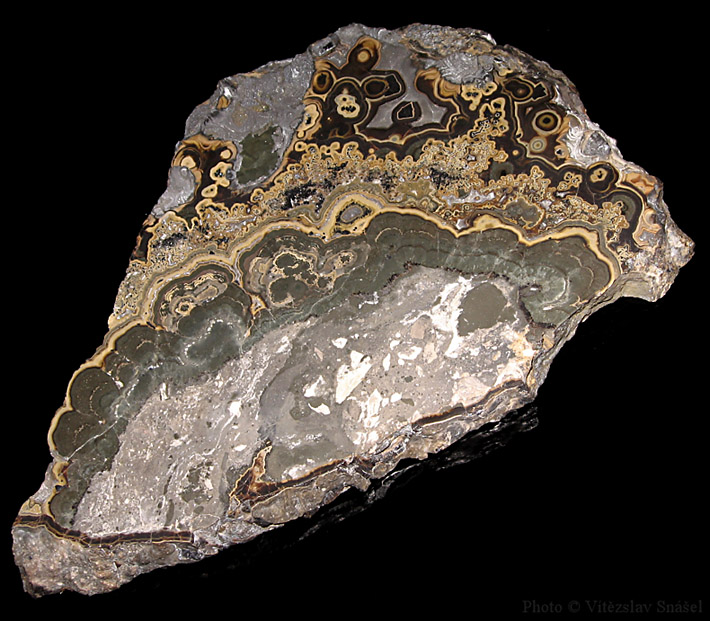 Sphalerite is sometimes triboluminescent, which means that it looks orange or yellow when it is struck by a harder object. It is also known to fluouresce in an yellow, orange or blue colors when placed under ultraviolet light, although this trait is most common in transluscent specimens. Sphalerite dissolves in hydrochloric acid, and when it does, it smells like sulfur or rotten eggs, because the smelly (and poisonous) H2S gas is released.

Sphalerite is the most common zinc mineral and the most important zinc ore. When Cd, In, Ga, Ge and Ta are present, they are recovered from sphalerite as well. Zinc is used in protective zinc-coatings on steel, in brass (copper-zinc alloy) production, in batteries and electronics and in the production of white pigment (ZnO - zinc oxide). 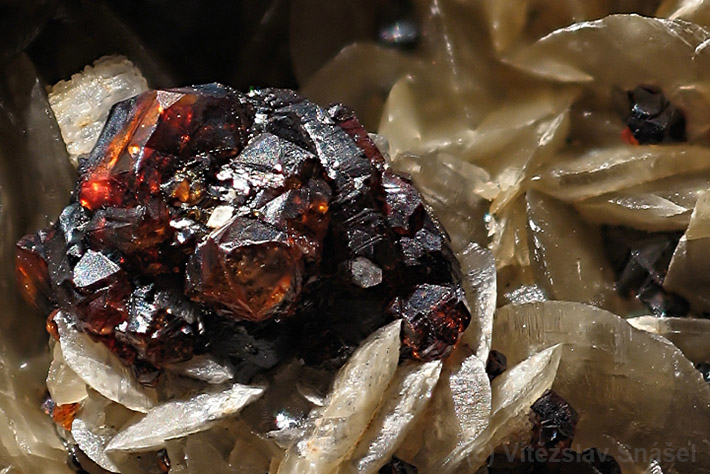 Sphalerite is common in mineral collections, and those who do keep it find beauty in its variety of shapes and colors. Transparent yellow and red specimens are highly prized, and may be cut into faceted shapes.

Most of the nice sphalerite specimens are of hydrothermal origin. Sphalerite is very common on medium-tempered ore veins, often associated with galena, pyrite, chalcopyrite, siderite, fluorite, baryte, calcite or dolomite.

Sphalerite can also originate from volcanic activity, and many submarine volcanoes produce a mixture of sulfides with significant amounts of sphalerite. These volcano-sedimentary layers can be metamorphosed into stratiform deposits. Sphalerite can also occur as a massive deposits together with pentlandite, pyrrhotite and chalcopyrite in mafic magmatic rocks like gabbros. Some skarns and greisens also contain significant amounts of massive sphalerite. A sedimentary origin of sphalerite is possible but quite uncommon. Weathering of sphalerite produces mainly hydrozincite, smithsonite and hemimorphite. 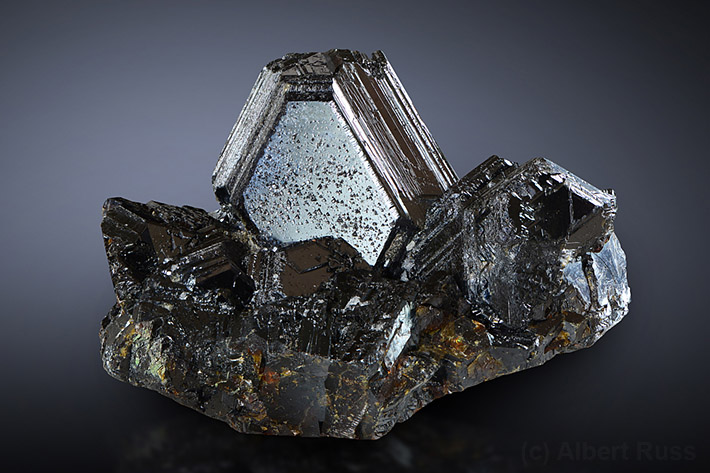 Sphalerite is easy to find at many sites all around the world. In Europe, many beautiful specimens have been recovered from classic sites like Binntal, Switzerland; Banská Štiavnica, Slovakia; Stříbro and Příbram, Czech Republic; Lindares, Spain; Cavnic and Baia Sprie in Romania; Trepca in Kosovo, Clausthal and Ramsbeck in Germany, Bleiberg in Austria or Madan in Bulgaria. Highly prized schalenblende comes from Segen Gottes Mine in Germany, Olkusz in Poland, and Schmalgraf Mine in Belgium. 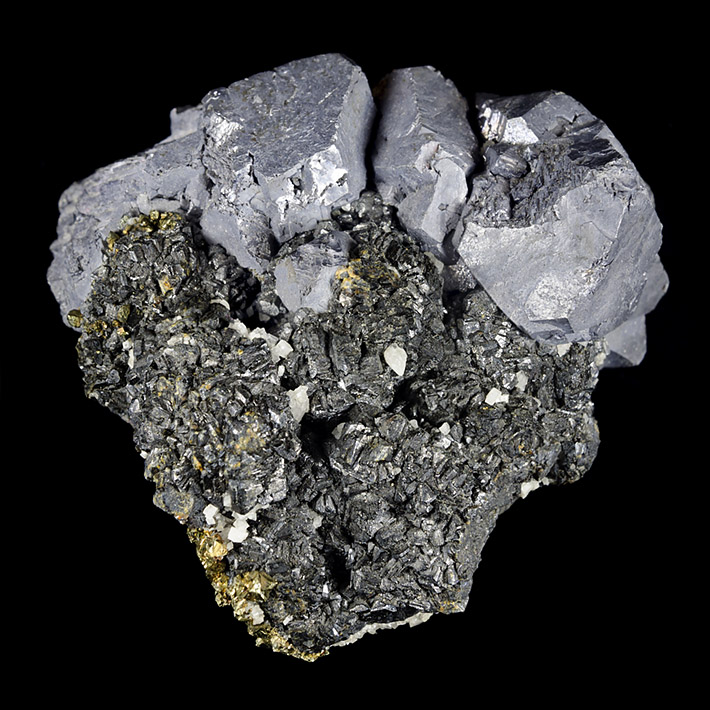 Many specimens have more recently been discovered in Kangjiawan, Nandan, and the Taolin Mine, all in China. Santa Eulalia and Naica in Mexico and the Huaron Mines in Peru are responsible for large and well-formed sphalerite crystals. Sphalerite is also produced in Tsumeb, Namibia. The rock dump at Niagara Falls in Canada has recently begun to produce sphalerite crystals as well, along with locations in Ontario and Quebec.

The United States has a wide variety of sphalerite available for mining. Most of the best United States specimens come from Treece, Galena, and Baxter Springs in Kansas; the Joplin area in Missouri; and Picher in Oklahoma. Some other productive sites include the Elmwood and Gordonsville Mines in Tennessee and the Denton Mine in Illinois. Beautiful examples of sphalerite can be also found in the Commodore and Bachelor Mines in Colorado; Balmat and Pierrepont in New York; and Franklin and Ogdensburg in New Jersey. 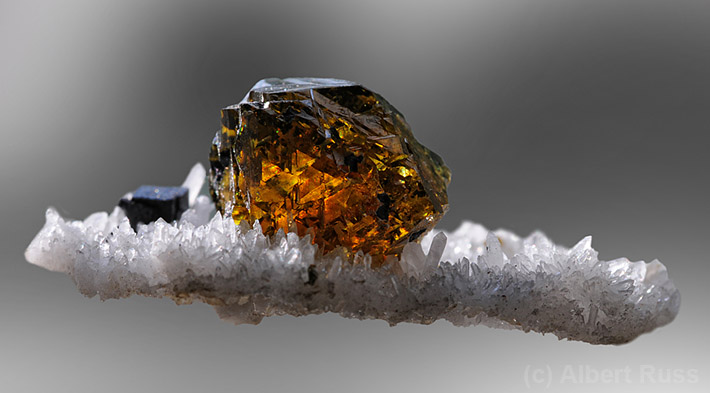