Smithsonite, aka zinc spar, is an uncommon and colorful secondary carbonate. It was rarely mined as a zinc ore, but its rich variety of colors and aesthetic specimens make it a highly valued mineral by many collectors.

Its distinguishing characteristic is that it forms almost exclusively as an alteration product of oxidizing zinc sulfides, and that its typical geologic comfort zone is below the water table.

Smithsonite chemical formula is ZnCO3 (zinc carbonate). It is a member of the trigonal crystal system, rarely crystallizing as a discrete mineral specimen. Although a member of the calcite group, it rarely displays a rhombohedral form, occurring instead as botryoidal or reniform masses, and less often as spherulitic, earthy or massive clusters. The rare instances of rhombohedral smithsonite can exhibit curved, rounded surfaces and display double refraction. 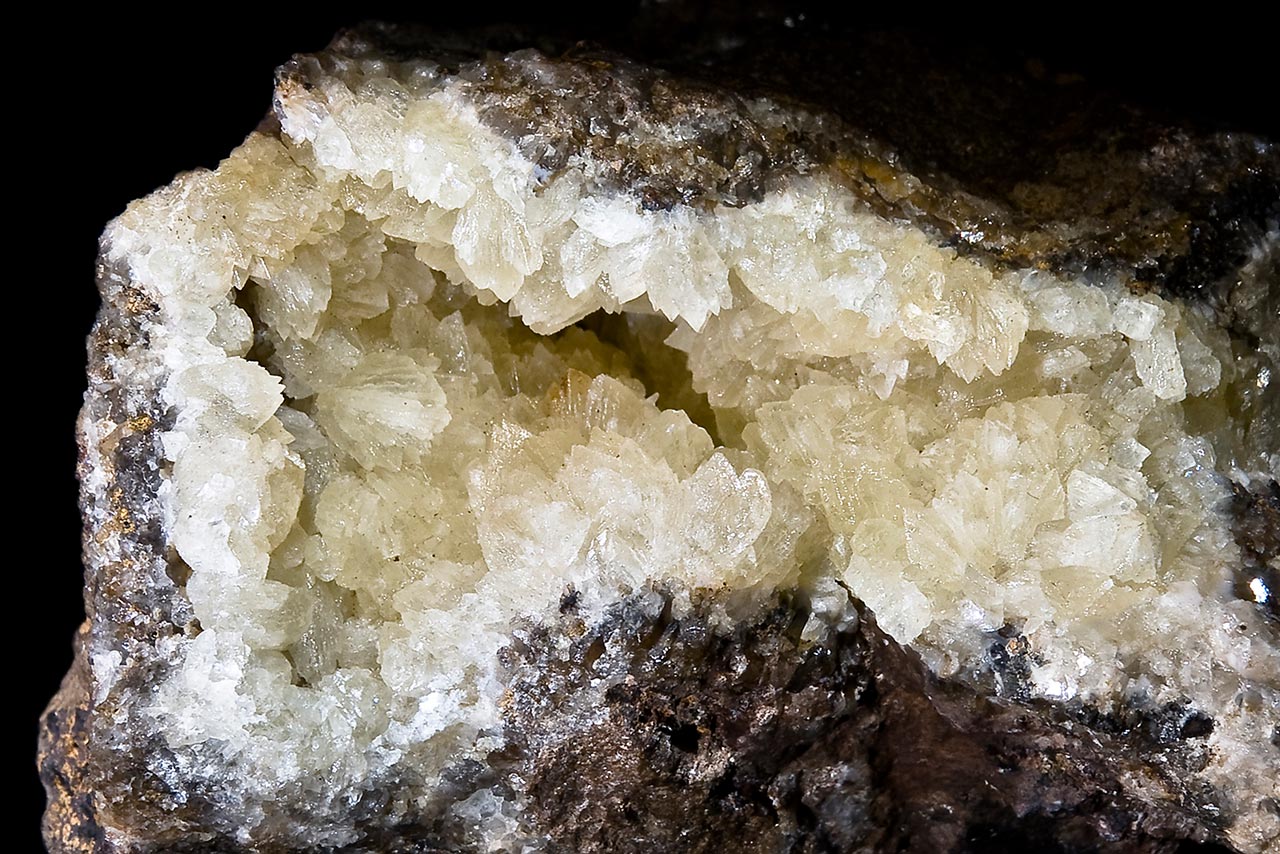 Smithsonite is a member of calcite group minerals, which have a similar structure and form several solid-solution series. The miscibility of the calcite group members is limited - especially because the Ca2+ cation is too big to be accomodated by the smithsonite structure. Of the several possible members of the solid-solution series associated with smithsonite (ZnCO3), only the mixtures with siderite (FeCO3) and rhodochrosite (MnCO3) are common. The slid solutions with magnesite (MgCO3), spherocobaltite (CoCO3) and otavite (CdCO3) are far less widespread.

Each of the different cation substitutions cited above imparts a specific hue to the mineral: 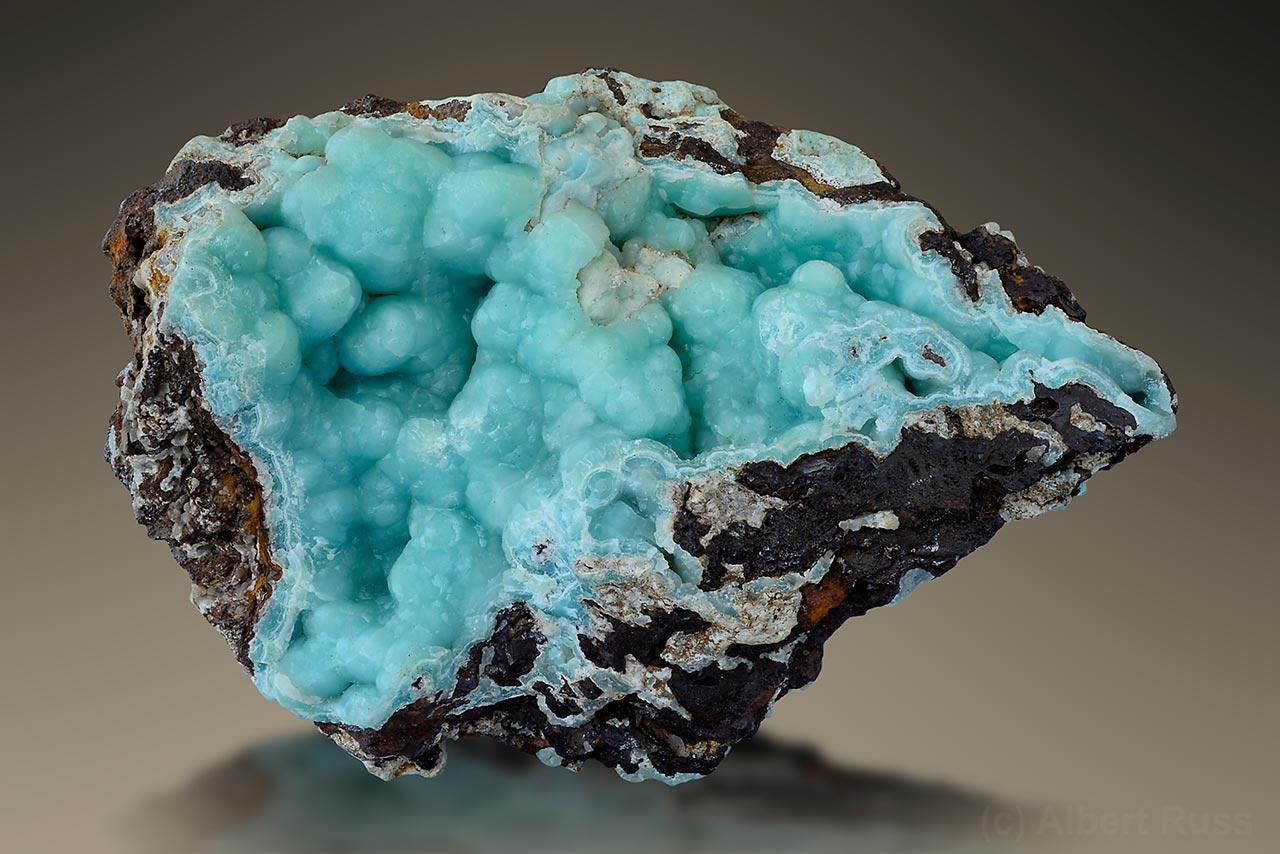 Cleavage is perfect in {1011}; luster ranges from vitreous to pearly to greasy to dull. Fracture is sub-conchoidal, splintery or uneven. Its hardness is unvarying, at 4.5, with a white streak and a small range of density, 4.4-4.5. By weight, smithsonite is 64.90 % ZnO and 35.10 % CO2. Smithsonite is sometimes fluorescent in UV light. 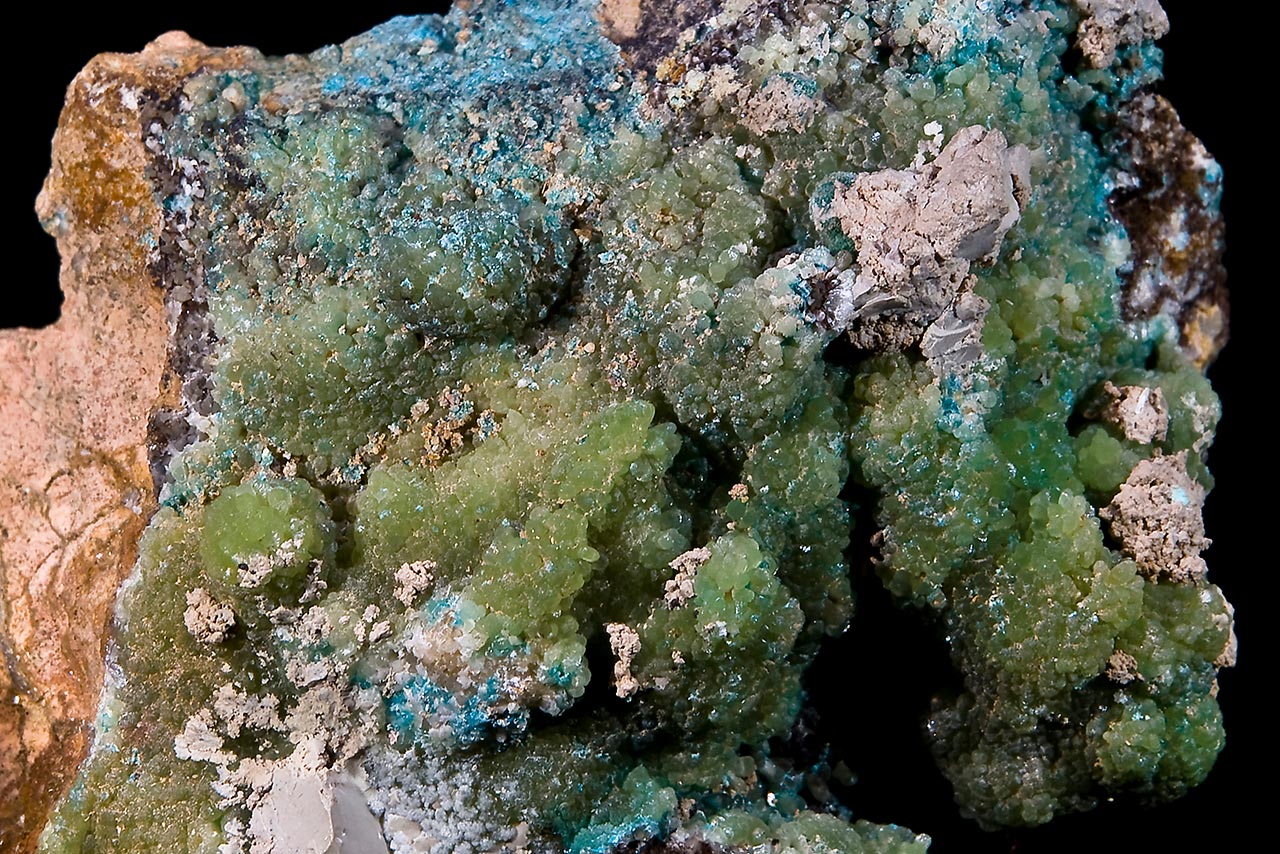 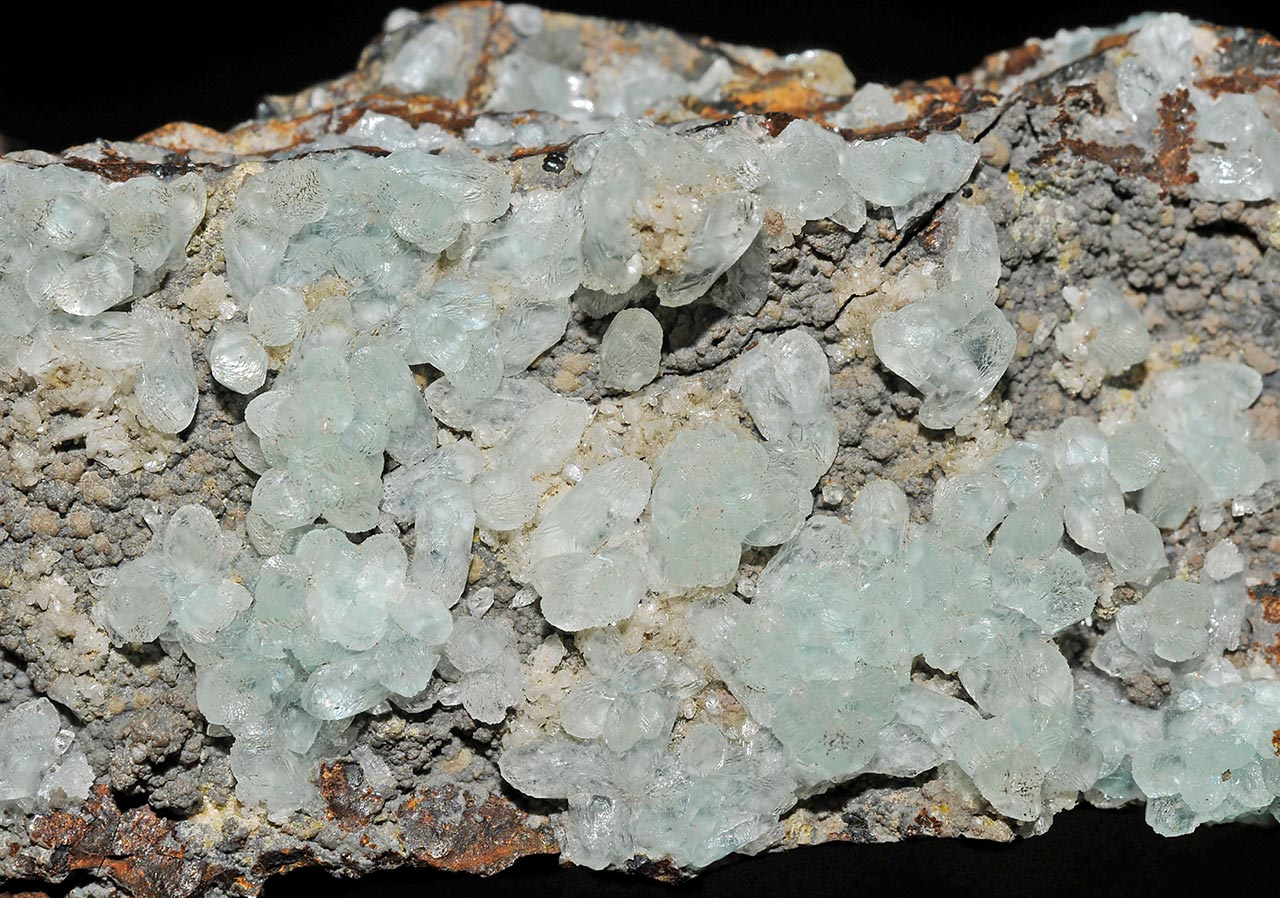 Naming and Discovery of Smithsonite

Smithsonite, along with hemimorphite, was identified for several centuries as one mineral, calamine, on the basis of early naming and usage from the time of Agricola, who first referred to the mineral suite in 1546 and called it - or them - Lapis calaminaris. In 1747, Johann Gottschalk Wallerius referred to the same mineral by the shorthand term calamine. In 1780, Torbern Bergmann analyzed calamines and identified them as mixed ores of zinc carbonate and silicate. In 1803, James Smithson (benefactor of the Smithsonian Institution) systematically investigated the calamines and confirmed that they were carbonate-silicate mixtures. In 1832, Francois Sulpice Beudant formally renamed the zinc calamine as smithsonite in Smithson's honor. 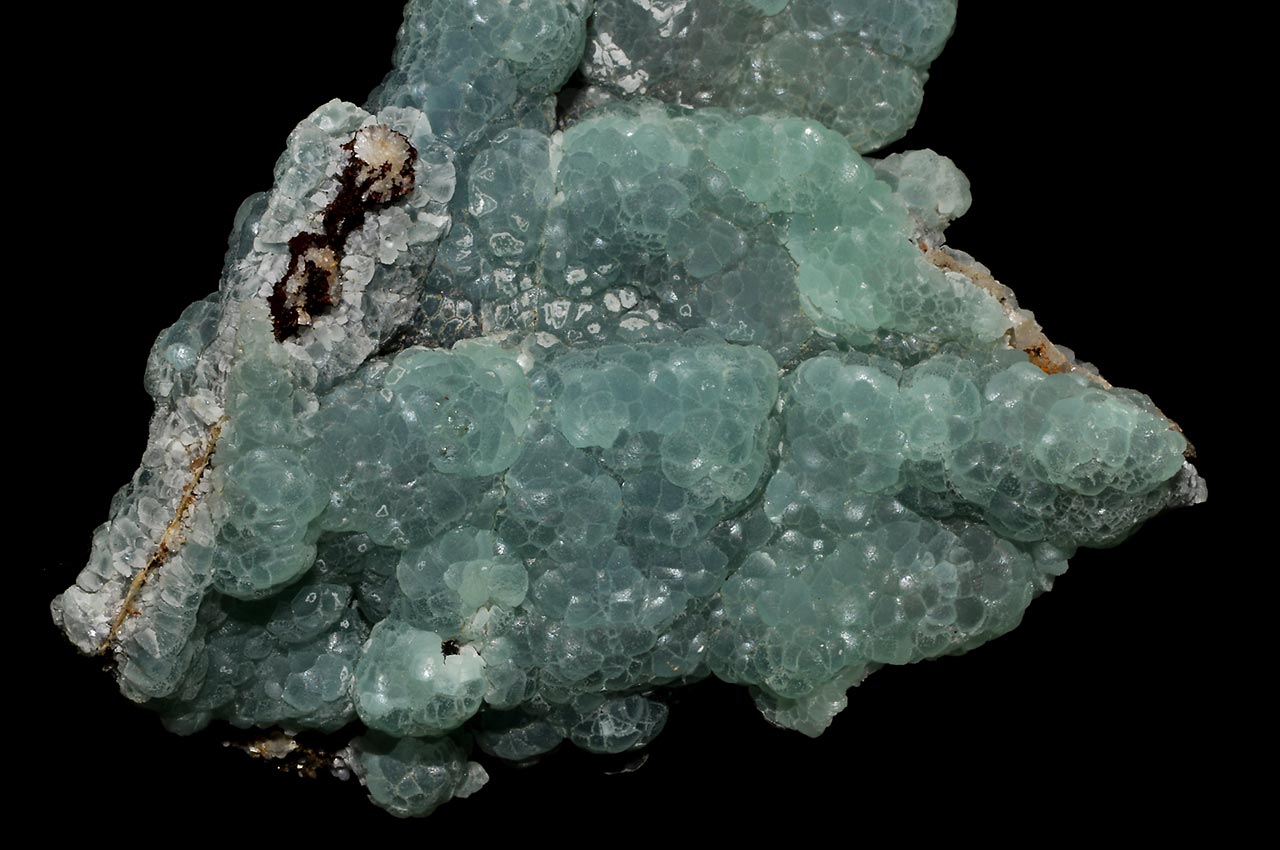 As a minor gemstone, smithsonite is rarely cut on account of its softness and rarity as a display specimen. If cut, the jeweler will take care to maximize and preserve the rough crystal weight. The gem should be mounted in a secure setting, and only worn in circumstances where damage is unlikely. The bonamite variety is used as an ornamental stone. 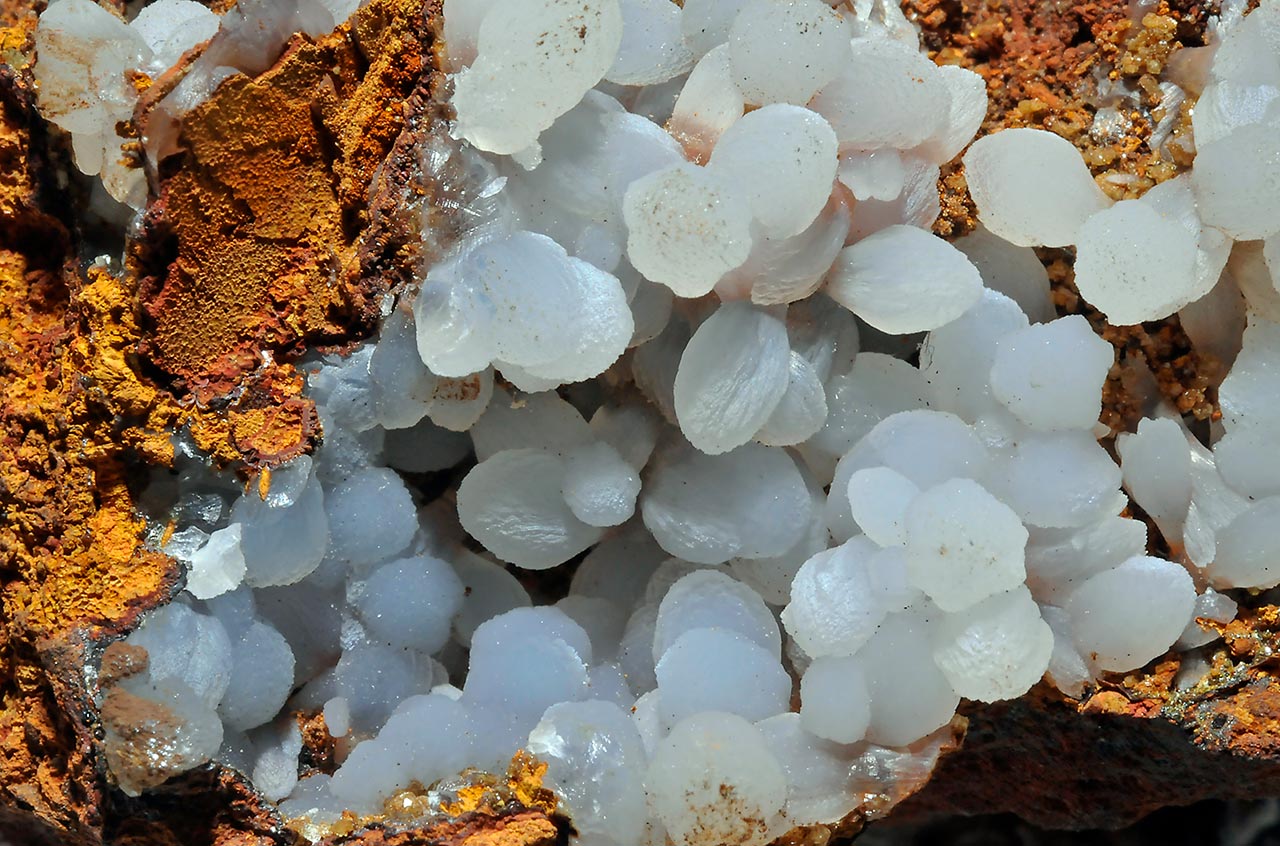 Smithsonite was mined as a zinc ore at some deposits with substantial accumulations in weathered zones. Until the 18th century, calamine (smithsonite and hemimorphite mixed ore) was essential for the production of brass since sphalerite (main zinc ore) processing technique was not known.

The formation of smithsonite requires oxidative conditions and presence of HCO3- dissolved in water. The (hydrogen)carbonate anion can be formed either by dissolution of primary carbonates - usually calcite or less often dolomite - or by CO2 dissolved in water circulating in near surface conditions. Generally, weathered iron caps (gossans) of sulfide deposits are the typical environment where smithsonite occurs.

Smithsonite is exceptionally rare as a discrete, specimen-quality mineral. Only three localities, Tsumeb and Grootfontein in Namibia and Broken Hill in Zambia, are characteristically cited as the source of excellent crystals. 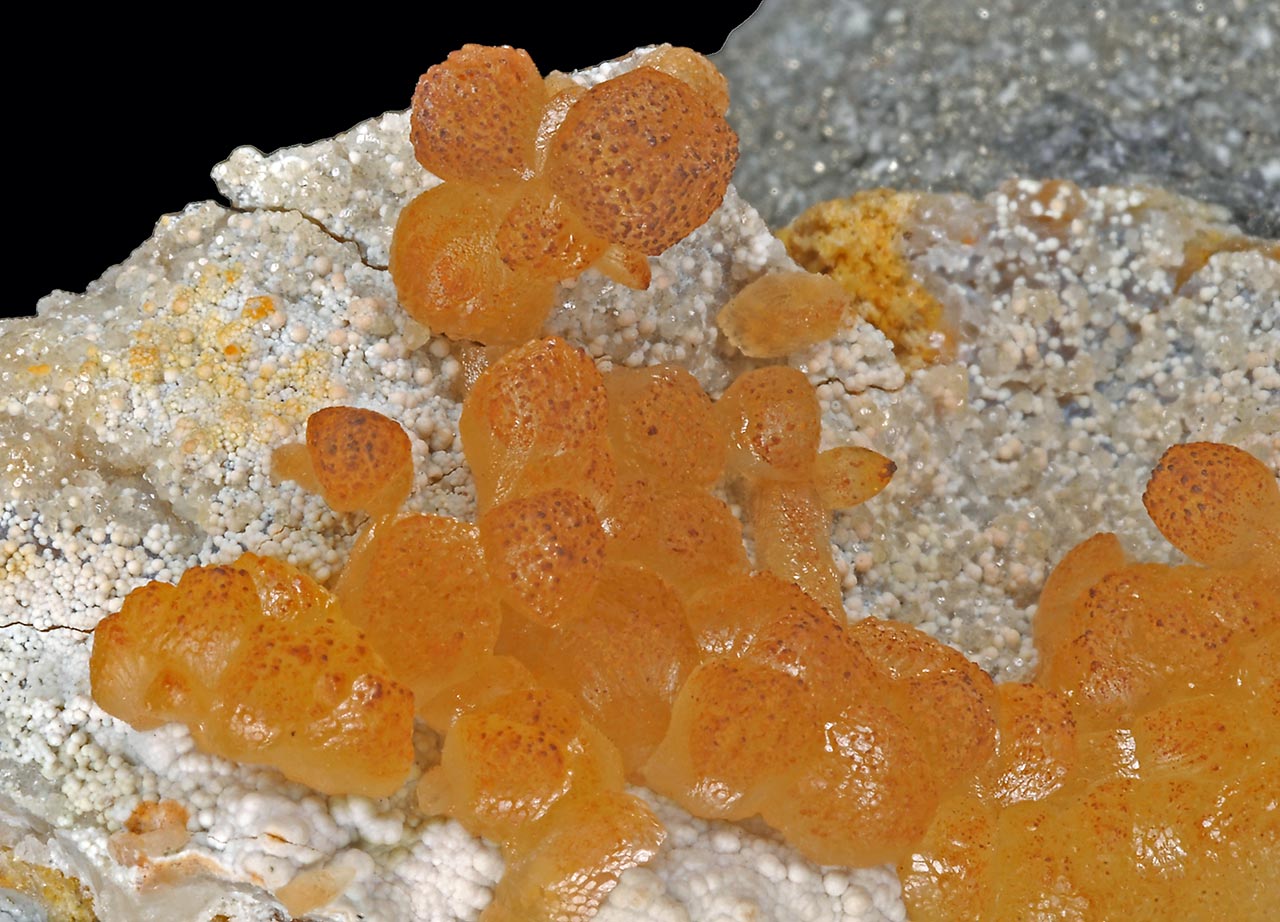 The Tsumeb deposit is widely revered as the Mecca of world mineral treasures, owing to its abundance of spectacular mineral specimens including smithsonite. The Namibian site at Tsumeb is the host of a thick sequence of steeply dipping Precambrian shallow-water carbonates. The deposit is a moderately-dipping, long, pipe-like body of copper-lead-zinc-silver sulfides crossing one stratigraphic interval of dolomites. The surface expression of the pipe is an ellipse oriented NW-SE measuring 25 x 6 m; at depth, the ellipse maxes out at 225 x 90 m. The pipe is locally attenuated by multiple slip planes and shears within the bedding, creating a chaotic mix of local collapse breccias and locally oxidized intervals. 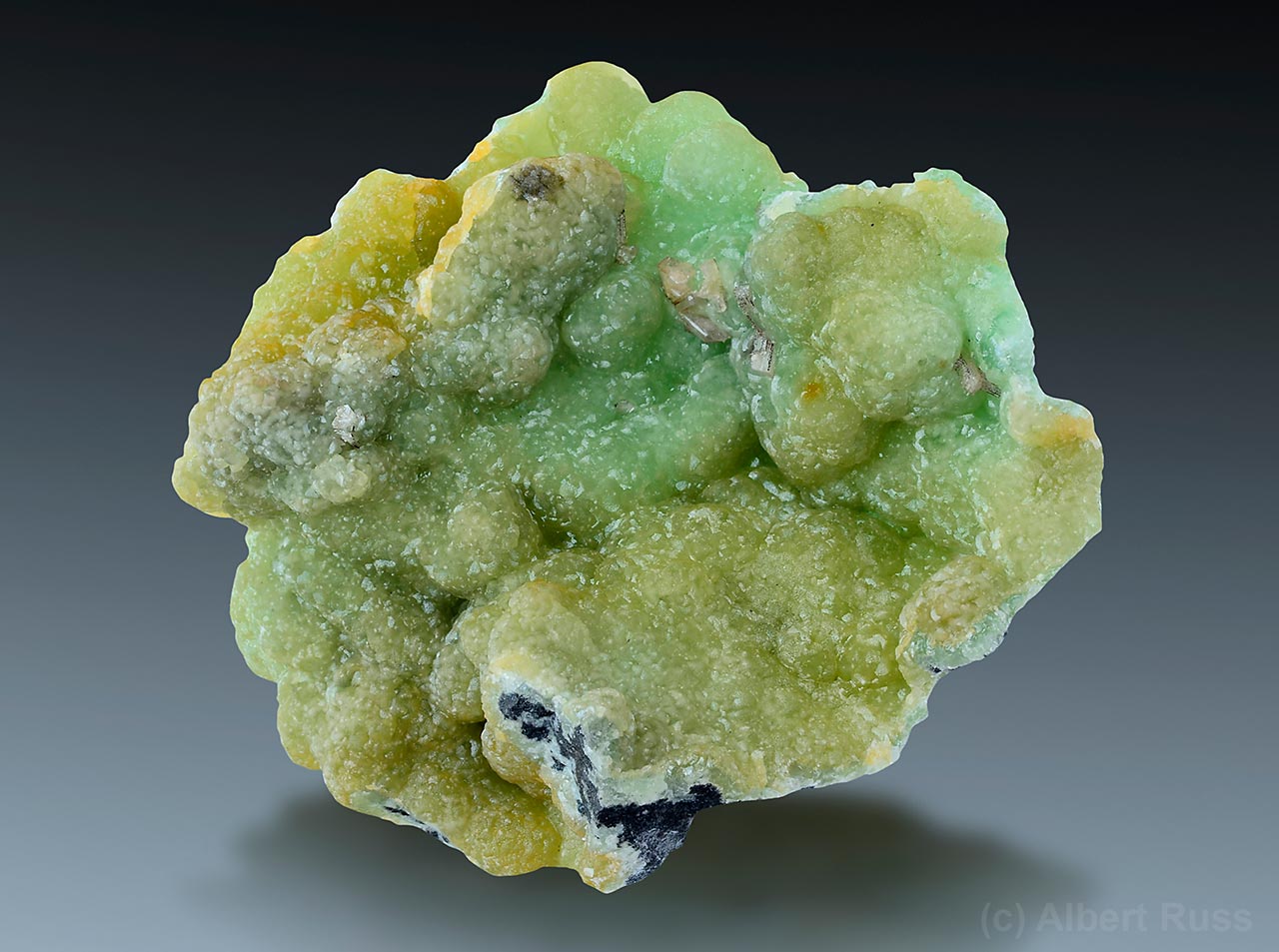 The Broken Hill site in Zambia is hosted in a featureless, late Proterozoic dolomite lying in a graben bounded by two NW-striking faults. The mineralized dolomite body is pipelike, plunging ENE at a shallow angle to a depth of nearly 475 m. In this regard, it bears strong similarities to the Tsumeb pipe.

The original Broken Hill District in New South Wales, Australia is often cited as a source of smithsonite samples. 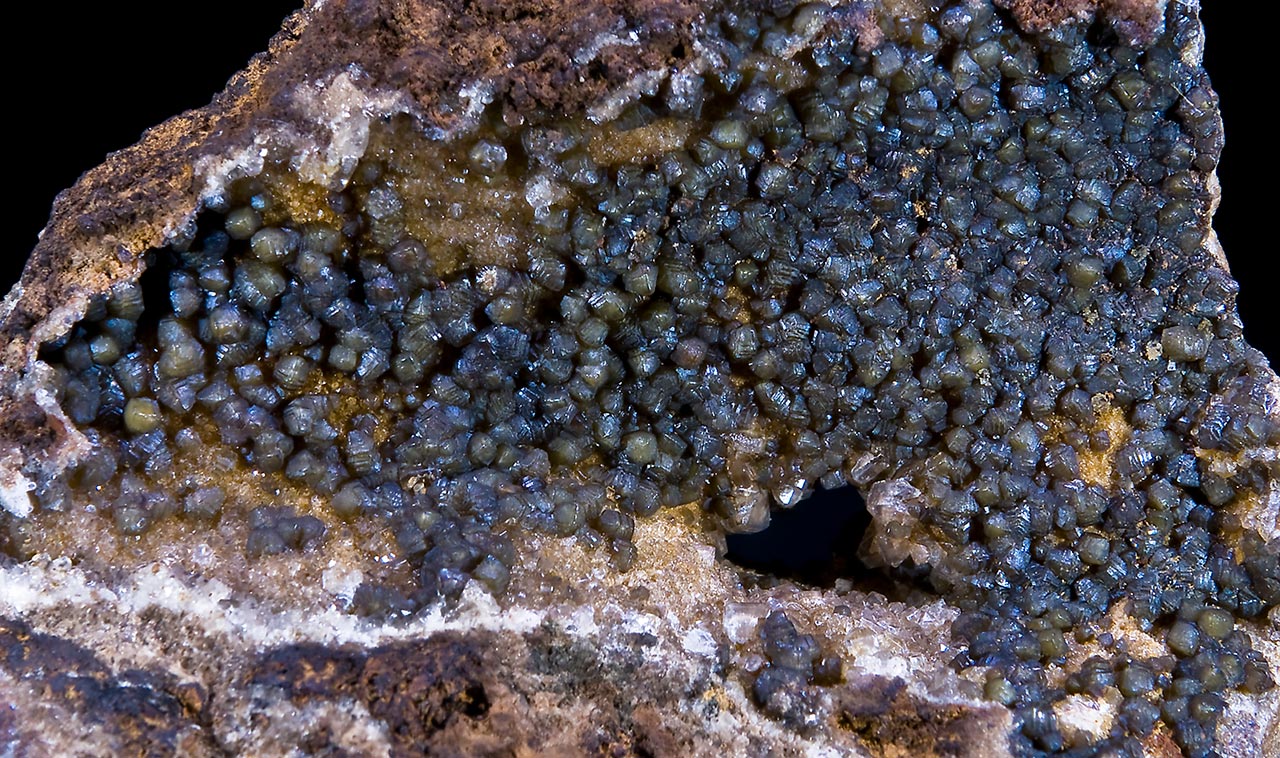 In Europe, three principal localities are Italy, Greece and Poland. The Italian island of Sardinia hosts the recently established (1998) UNESCO Sardinia Autonomous Region as a Geologic, Mining Historic and Environmental Park. This park includes two of the most productive Italian zinc mines in Iglesias, Massua and Monteponi, famous for crusts of smithsonite. 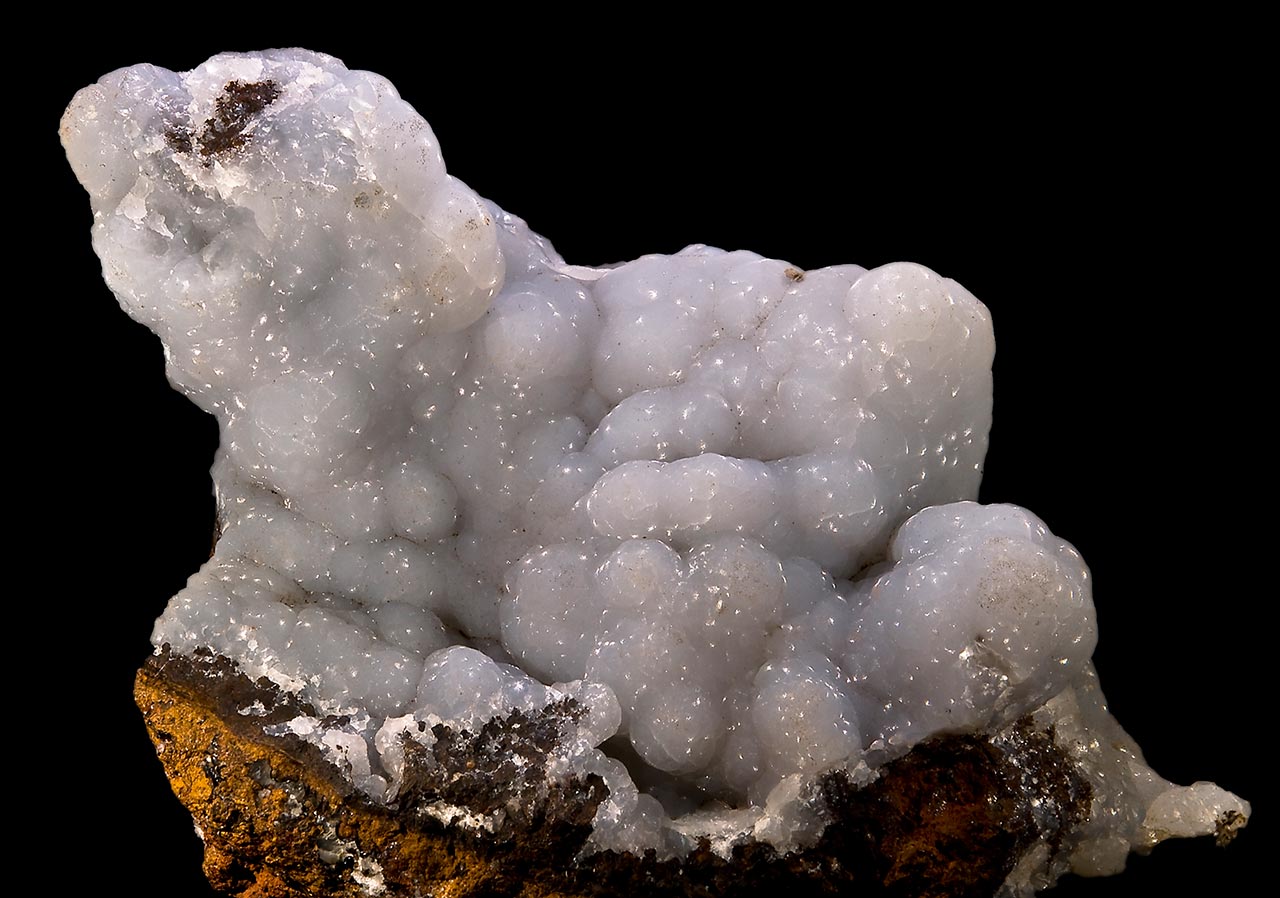 The mineralization at Lavrion, Greece owes its existence to a complex of highly metamorphosed carbonates intruded by a granite in a Miocene detachment fault complex. The contact aureole includes a large number of sulfidic orebodies characterized by extensive cataclastic shearing and recrystallization. The smithsonite is the product of extreme surface oxidation of the zinc protore. Highly acidic groundwater generated by the oxidation dissolved the carbonate matrix of the enclosing marbles and created multiple open spaces for remobilized iron and zinc to reprecipitate as iron and zinc carbonate. It is reported that masses of blue-green botryoidal massed of smithsonite were common. 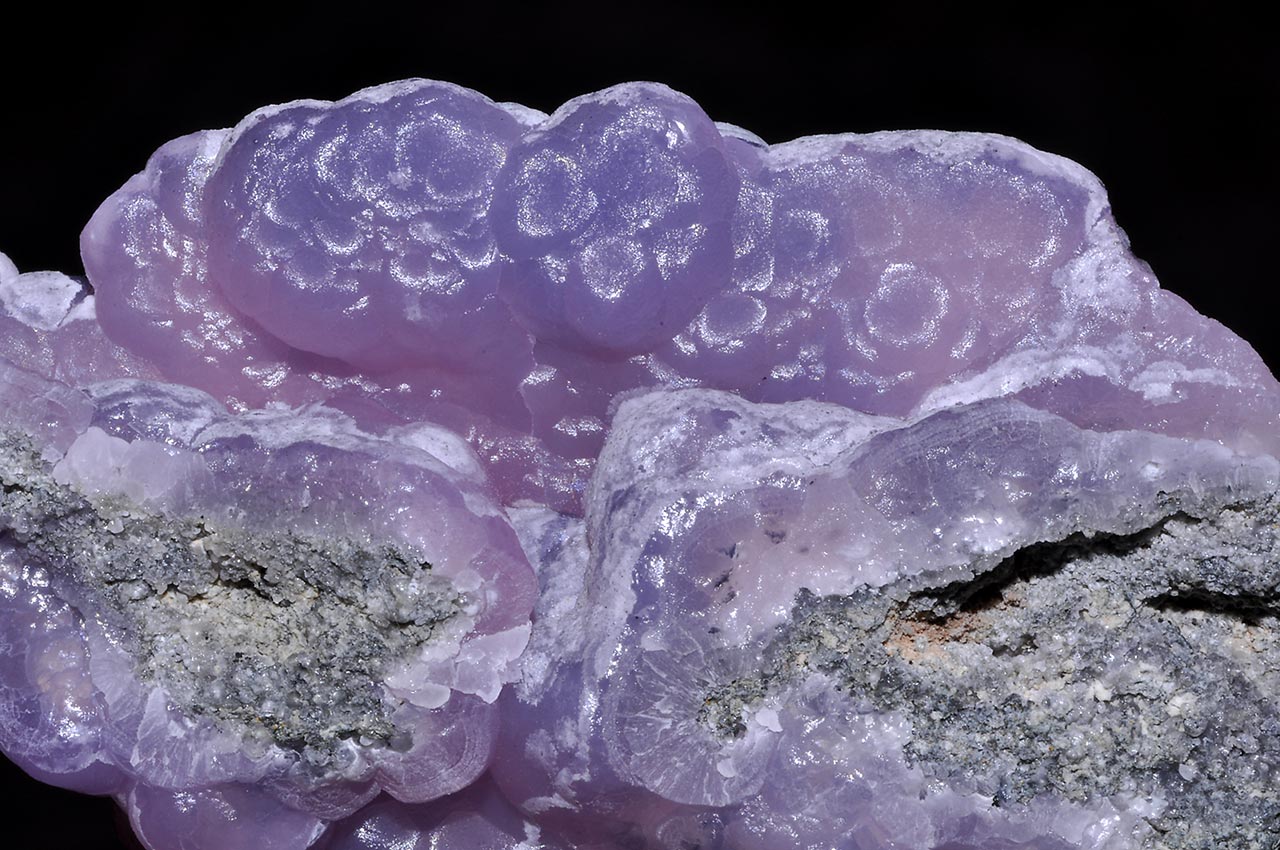 The Triassic sediments in the Bytom portion of the Upper Silesia Coal Basin of Poland is a historic repository of replacement bodies of lead and zinc. Those deposits were exploited from the Middle Ages, and are now exhausted.

The U.S. hosts a number of occurrences. Among the most studied and best understood are the replacement ores of the Leadville District in central Colorado. In general the vein systems are characterized by regional gold-silver zonation. The lead-zinc replacement bodies do not show lateral variation as much as vertical zonation. The lead sulfide galena oxidized to cerussite and remained insoluble, above the newly established water table; the zinc sulfide sphalerite oxidized to soluble smithsonite, which was deposited below the water table. The district-wide result is a series of blanket-like manto deposits which mimic the bedding but obey the water table. 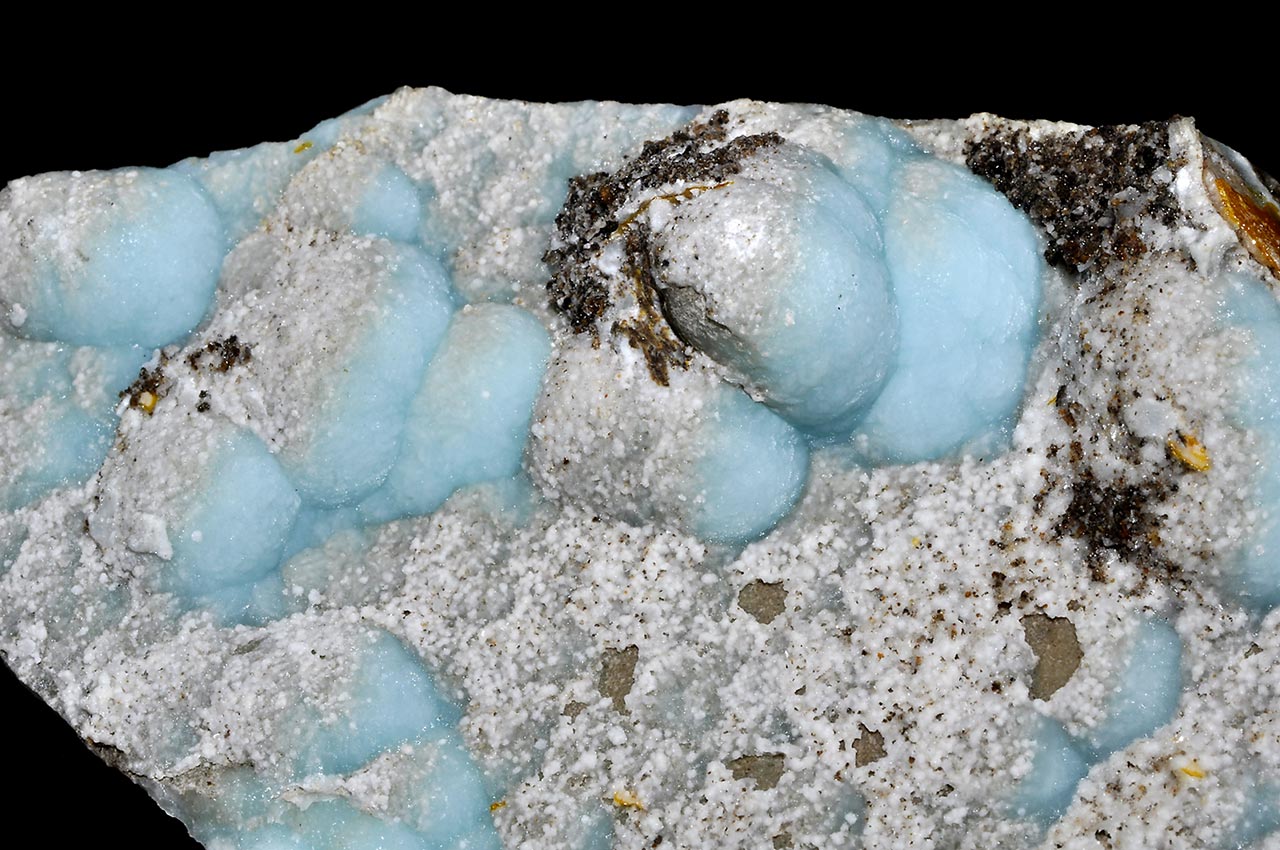 In New Mexico, the Kelly Mine near Magdalena, Socorro is famous for the extensive development of blue-green botryoidal smithsonite. The mineralization occurs in a series of deposits strong out along fault zones in a regional limestone intruded by a number of intrusives characterized by high-temperature contact metamorphic, mineral assemblages. However, the mineral zoning does not follow the geometry of the intrusive contacts as much as does the propagation of fluids along fault zones. The repeated faulting has allowed replacement bodies of sphalerite to become significantly oxidized to smithsonite. 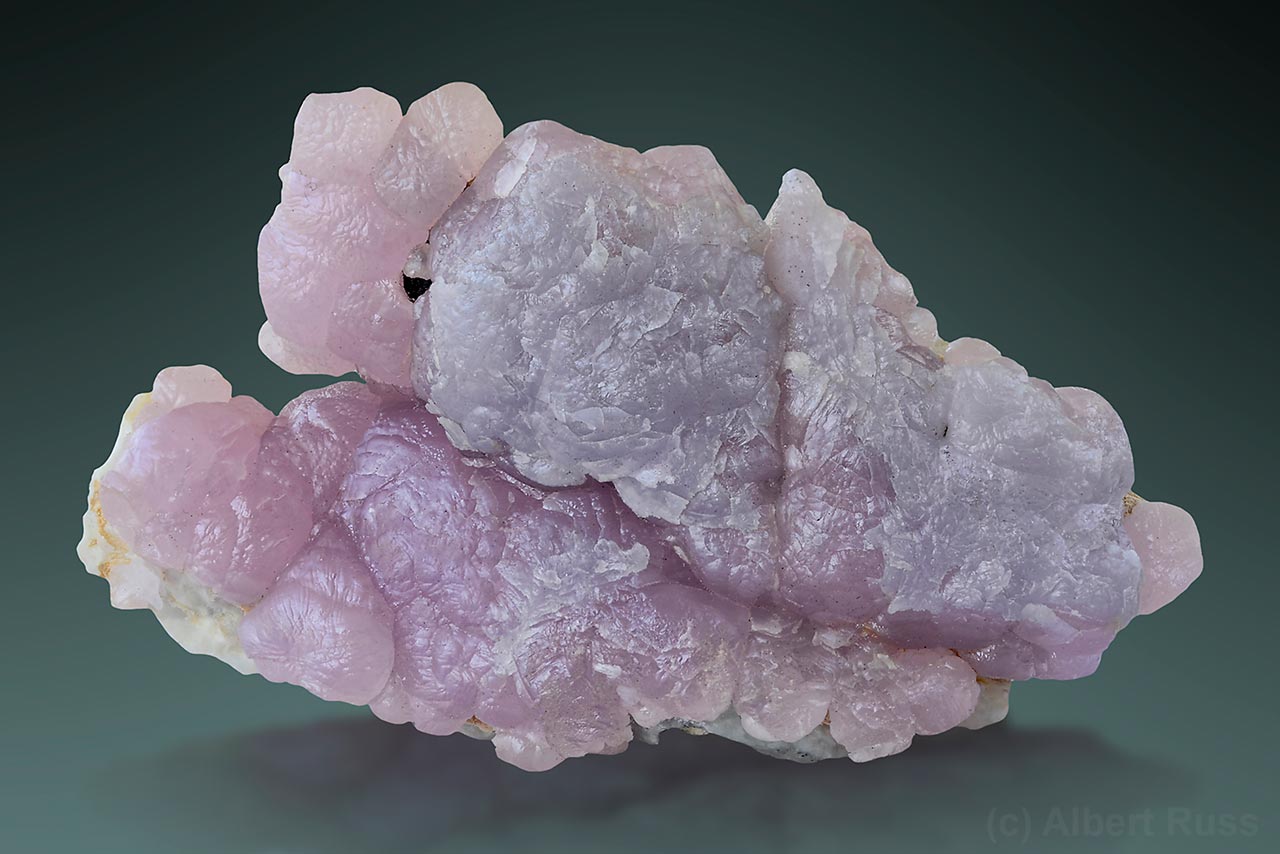 In Mexico, the Refugio Mine, Choix, Sinaloa; and the San Antonio Mine, Santa Eulalia District, Chihuahua are reputed to have exotic pink and electric green specimens.