Azurite is a secondary copper mineral, which forms outstanding specimens. It is very popular among mineral collectors because of its beautiful shade of blue and highly sought after dark crystals, often combined with green malachite.

The chemical formula of azurite is Cu3(CO3)2(OH)2. It is a monoclinic hydrated copper carbonate. Most commonly, azurite is found in small crystal forms, such as tabular, prismatic, or equidimensional shapes. Sometimes, it forms in striated crystals, and it may be radiating, crusty, columnar, fribrous, or even stalactitic, although these forms are less common. Over 100 crystal forms of azurite have been described. 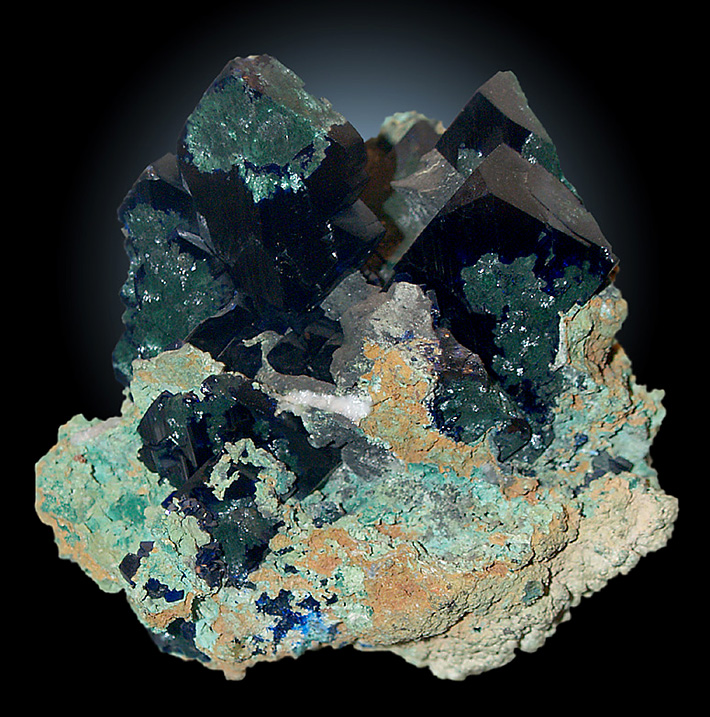 Azurite has a vitreous to dull luster. It is mostly opaque, but every so often it may be translucent. Azurite is a brittle mineral and registers at a 3.5 to 4 on the Mohs scale of hardness. It is soluble in ammonia, and when it is exposed to hydrochloric acid, it produces an effervescent result. This mineral is well-known for its blue color, which also leaves a blue streak. Bigger crystals are very dark blue and can appear almost black. 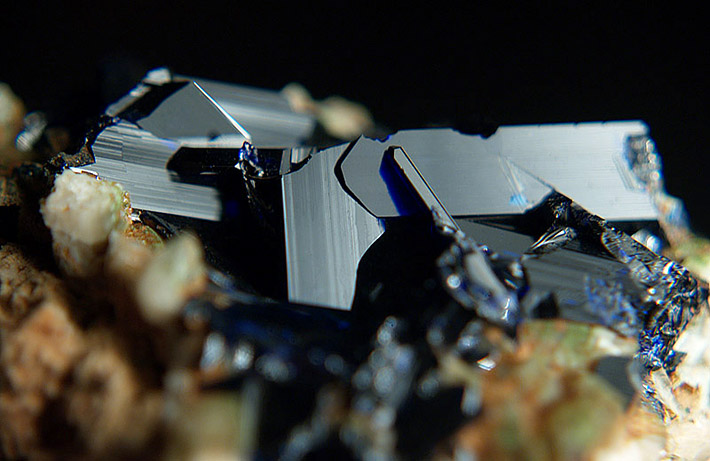 In dry and well ventilated places, azurite might lose some of its hydroxyl during a chemical change. When this happens, the stone effectively becomes malachite, but still retains the crystal shape of the azurite. An altered azurite that has partially become malachite will look green on one end, and fade to blue on the other. This way, azurite is often pseudomorphed to malachite. In some instances azurite pseudomorphs to native copper, and gypsum can pseudomorph to azurite or malachite. 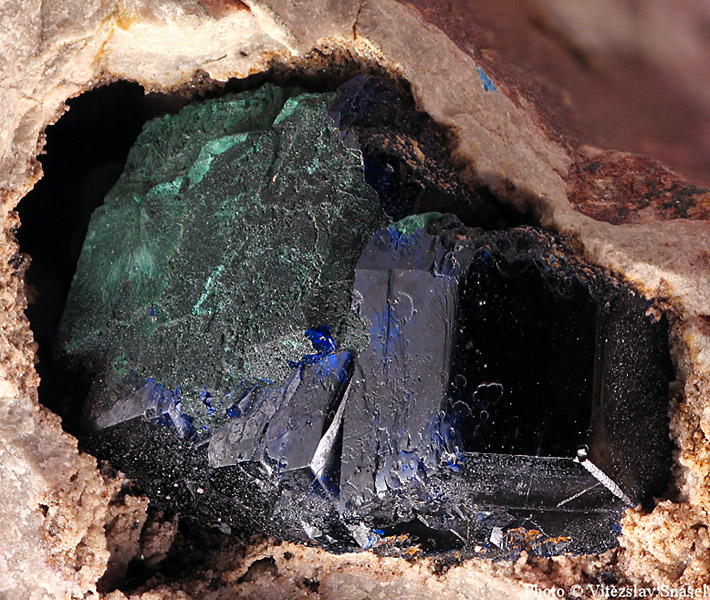 Azurite forms in copper deposits where oxidation has taken place. It forms as a secondary mineral when copper ores like chalcopyrite, tetrahedrite or bornite decompose. The formation of azurite is driven by the CO2 presence, pH and humidity.

Azurite is often associated with other secondary copper minerals like malachite, cuprite, native copper, brochantite or chrysocolla. Other carbonates like smithsonite or cerussite may be present too. 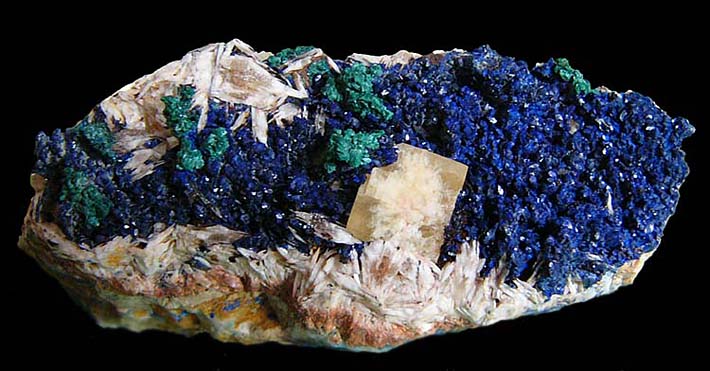 Azurite is too brittle to be of much everyday objects, but because of its beautiful color, it is nevertheless very popular among gem and mineral collectors. Very bright pieces are often polished until they sparkle, then are carved into beads and cabochons to be set into jewelry. Azurite is sometimes found along with green malachite, and when the two grow together, they form azure-malachite. In rare instances, azurite can grow with red cuprite, forming a beautiful compound called bluebird. Historically, azurite was used to form blue pigments by many ancient cilizations. It was very popular stoner also during the middle ages, and many famous paintings include some azurite. 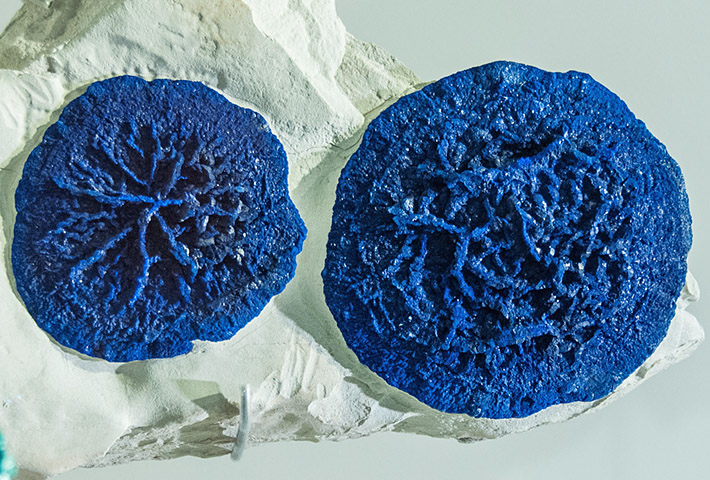 Some of the best specimens of individual, large azurite crystals have been located in Tsumeb in Namibia. The United States also provides many good quality pieces of this mineral to the market, including some very famous speciments that come from Bisbee, Arizona. Other well known classic sites are the Chessy-les-Mines in France and Redruth in Cornwall, England. Azurite from Hillarion Mine in Greece is also very popular among collectors. 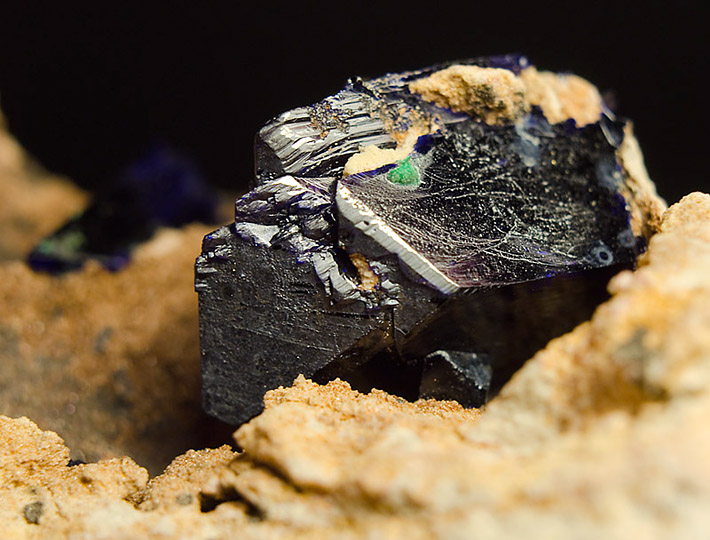 In the Malbunka Mine in Australia's Northern Territory, radial azurite discs occur on a matrix of white kaolinite to form a truly beautiful and unique growth. Other Australian sites include Proprietary Mine, Broken Hill and Burra. Banded pieces of azurite with malachite have been discovered in Morenci, Arizona, USA. 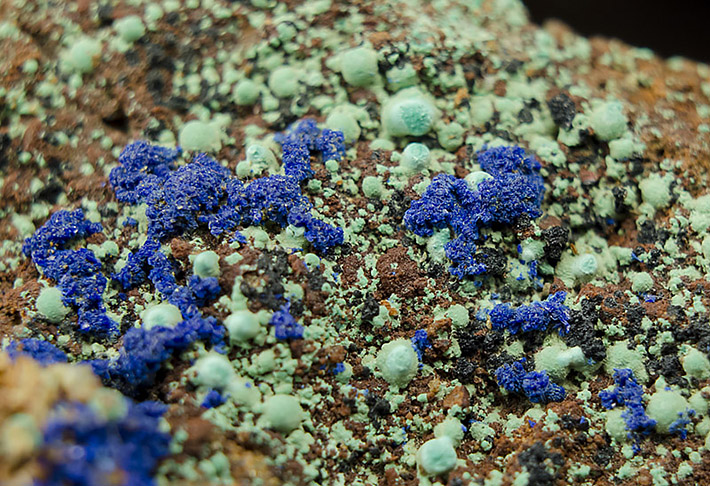 Some great discoveries of world class specimens were made in Bou Bekker and Toussit, Morocco. Great crystals still come from Kerrouchen, Morocco. More recently, the San Carlos Mine and the Milpillas Mine, both in Mexico, have been producing great quality azurite specimens. Tabular crystals can be found alongside ball concretions in Utah, and one very recent development has led to the discovery of large crusts of this mineral in New Jersey. Very good specimens were produced recently in several mines in China and in Rubtsovskoe, Rudnyi Altai, Russia.