Native copper was discovered through metal smelting in the prehistoric times and still belongs to the keystones of modern civilization. Its is also a very nice and popular mineral that is capable of forming complex and beautiful shapes.

The chemical formula of copper is Cu when it exists in a pure state and has isometric structure. Copper is isostructural with many other metal elements like silver and gold. This is the reason why these metals form natural alloys.

Copper usually forms masses or crystals that are distorted and have no notable crystal shape. Because of this, crystallized specimens are considered very valuable by collectors. When it does crystallize, copper forms dodecahedral or cubic crystals, and very rarely may form octahedral crystals, scales, wires, and dendrites. Sometimes, it grows together with silver, and produces a mineral called a halfbreed. 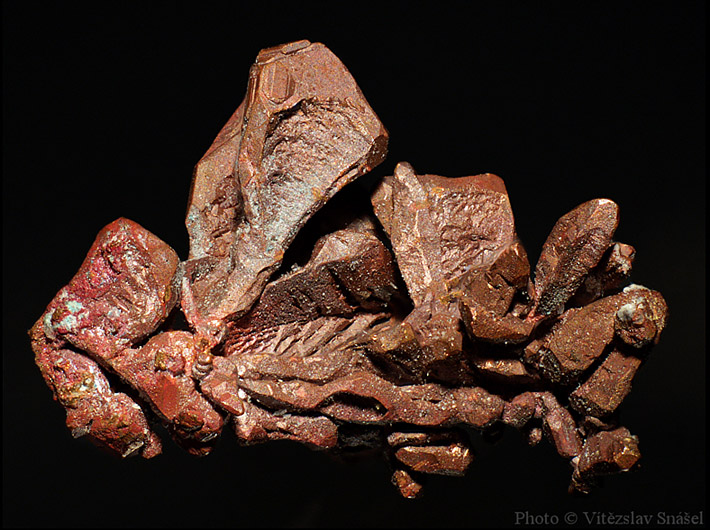 Copper is often found on its own as native copper, but may grow together with silver, or may show impurities. It has a metallic luster, and registes at a 2.5 to 3 on the Mohs scale of hardness. Copper density is 8.93-8.95 g/cm3. It is opaque in nature.

Copper is widely known for its malleability and ductility, making it an excellent choice for many everyday items. It is the second-best conductor of electricity, following silver, so it is often used in wiring and other electrical items. Despite its sturdy nature, copper is prone to tarnish. When it tarnishes, it first turns dull, then black and in the end bright green. Copper's streak is copper-red and shiny. 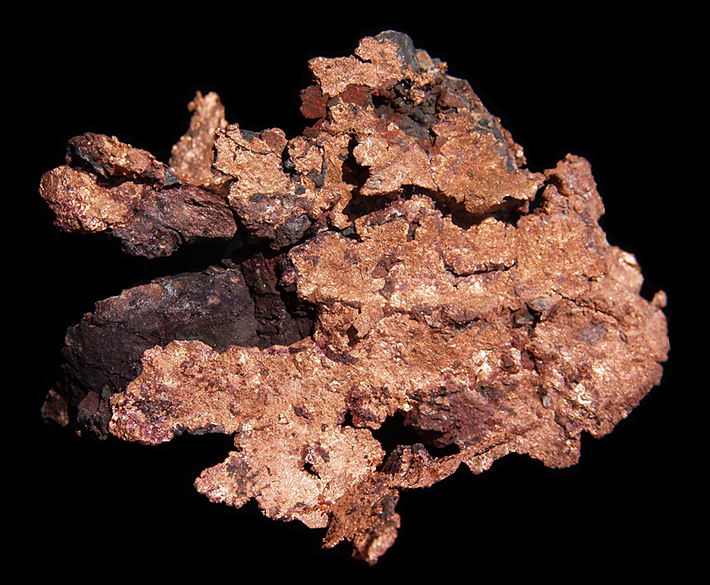 In prehistoric times, copper was the first metal used by mankind, because it can be easily smelted from native copper. Today, most copper is extracted from copper ores like chalcopyrite, tetrahedrite, chalcocite or bornite, making it the second most commonly used metal worldwide. 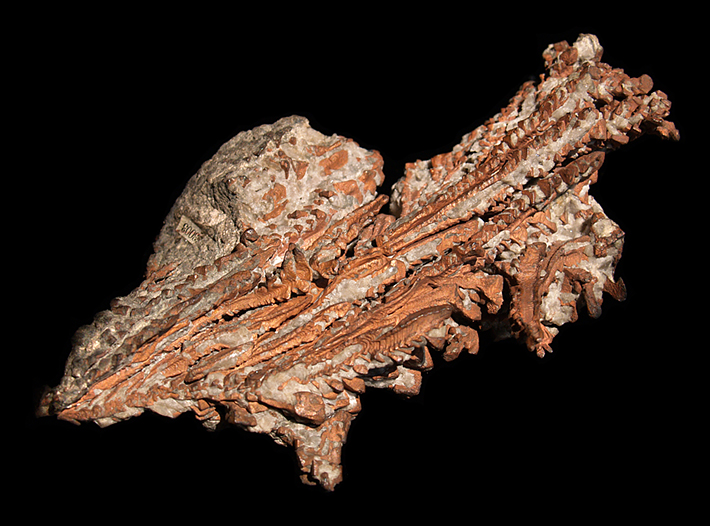 Most of today's copper is used for electrical purposes because of its great conductivity, as well as its ductile nature that allows it to be formed into long, thin wires. Huge amounts of copper are used for roofing and plumbing. Copper is also used in cooking utensils, coins and in many pigments, insecticides and fungicides - including the copper sulfate used for cleaning algae from pools. Lot of copper is used in jewelry, including copper in alloys with silver or gold. Pure copper jewelry is less popular because of its softness and tarnishing. 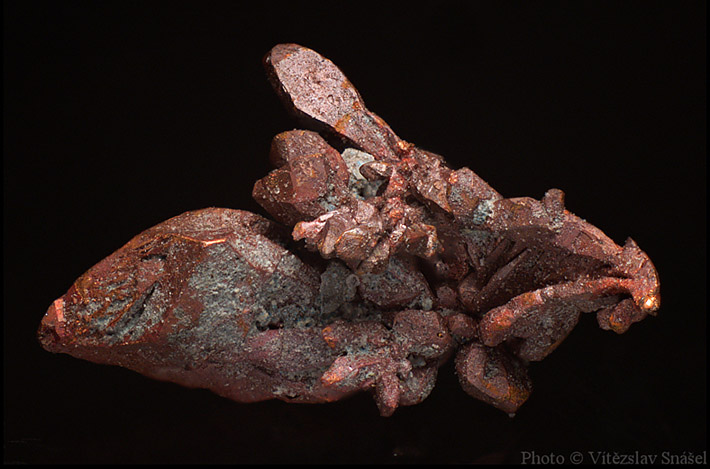 When combined with other minerals, copper can form alloys. Two of the most important of these alloys are bronze and brass. Bronze is an alloy formed from copper and tin, while brass is made of copper and zinc. An alloy of 75 % copper with 25 % nickel is used in the production of highly resistant nickel coins. Small amounts of copper are also added to aluminum to enhance its strength.

Primary native copper may be found in volcanic basalt or melaphyre rocks. Volcanic copper usually forms only small grains inside the rock, except huge copper aggregates from famous sites in Michigan. 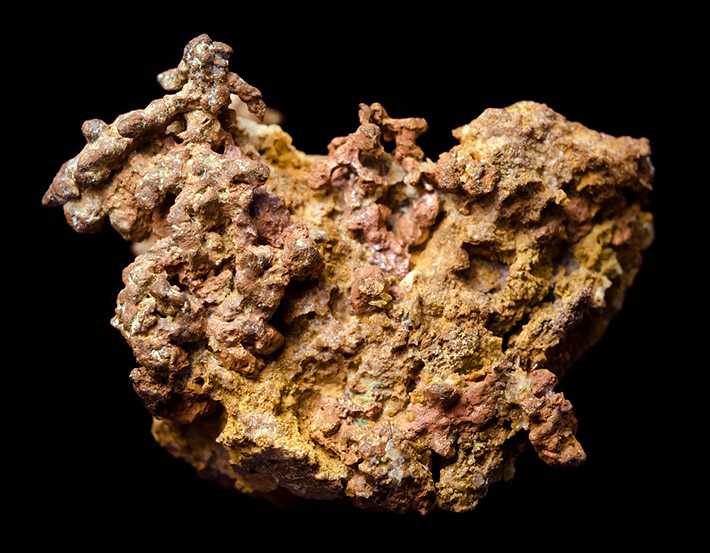 Native copper is also found in the weathered zones of sulfide deposits. The upper oxidation zone causes a breakdown of primary sulfides into various secondary copper minerals like malachite, azurite, chrysocolla and many others. Some of these copper salts are transported by mineral solutions into the deeper parts of the deposit with a lack of oxygen and reducing environment. This is the place where secondary native copper precipitates and forms highly sought after mineral specimens.

Copper can also precipitate from copper-rich acid mine waters, it usually replaces the iron parts of the mining equipment. Pseudomorphs of copper from iron nails or even rails are sometimes found in Cornwall, England. Huge copper aggregates formed in mine waters were recently found in Zlate Hory, Czech Republic. 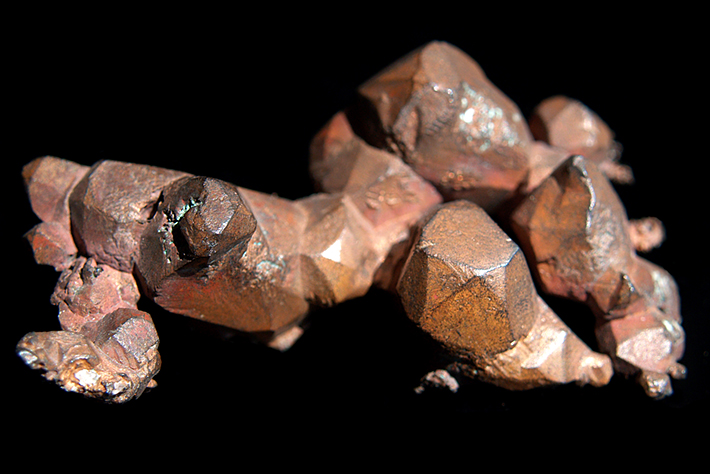 The largest amount of native copper in the world comes from the Keweenaw Peninsula in Michigan, including locations such as Caledonia, Copper Falls, Osceola, and White Pine, just to name a few. The biggest copper aggregate ever found comes from this area, with an impressive 15 m size and 420 tons of weight. Arizona has also been historically responsible for famous copper specimens, including those from Ajo, Morenci, and Ray. Bisbee, Arizona was once known for its copper ore, and today, copper from this mine is widely sought after by collectors. New Jersey is also known for its copper deposits. 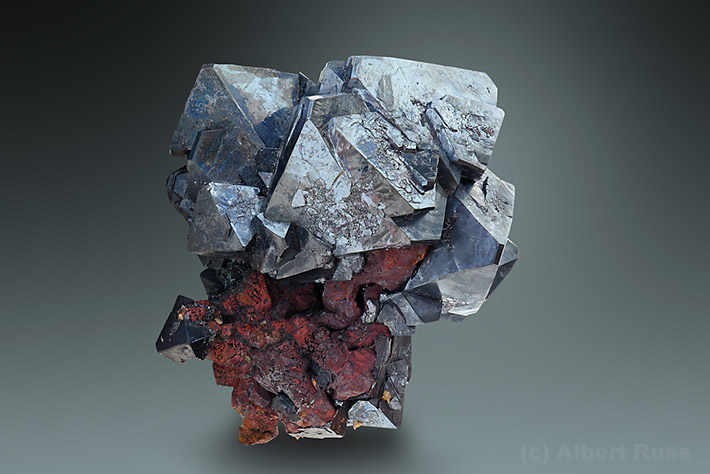 Outside the United States, copper can be found in New South Wales, Australia; Ogonja and Tsumeb, Namibia; Cornwall, England; and China's Hubei and Jiangxi Provinces. Copper pseudomorphs from aragonite have been located in Corocoro, Bolivia. Copper is also found in Afton Mine, British Colombia and in Mamainse Point, Ontario, both in Canada. Very nice dendritic copper aggregates were found recently in Dzezkasgan, Kazakhstan and awesome copper aggregates with native silver wires and cuprite crystals were produced in Rubtsovskoye, Russia.