Chrysocolla is a bright colored hydrated copper sheet silicate and a minor ore of copper, usually appearing as secondary encrustations on primary copper ores. It is among the brightest of blue and blue-green minerals, accounting for its desirability.

It is usually soft and unknown in discrete crystal form, limiting its usefulness as anything but a beautiful specimen to behold, but harder varieties can be fashioned into jewelry.

Chrysocolla forms crystals in the orthorhombic system, but it is cryptocrystalline and never appearing in visible crystals. It forms include massive or botryoidal rounded masses; reniform, nodular or stalactitic groups; and less commonly fibrous or solid vein fillings. 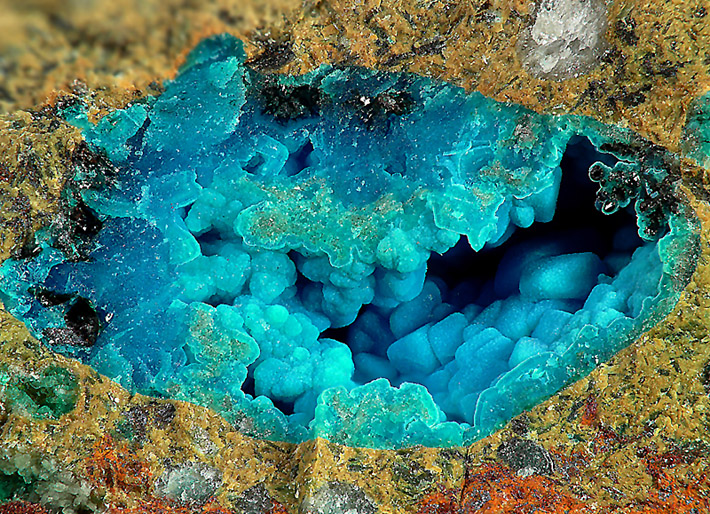 The complicated idealized formula of chrysocolla is (Cu2-xAlx)2H2-xSi2O5(OH)4.n(H2O) - this mineral was grandfathered: it became valid prior 1959. The complexity of its apparent formula has given rise to spectrographic study suggesting that its true formula might be a microscopic mixture of the copper hydroxide spertiniite [a rare copper hydroxide, Cu(OH)2], amorphous silica and water. However, later detailed complex study and Raman spectroscopy study proved that chrysocolla is a true complex silicate mineral.

Chrysocolla occurs as exceptionally bright blue, cyan, blue-green, or green masses. It is often coated with a drusy layer of glossy quartz, or microscopically intergrown with quartz. 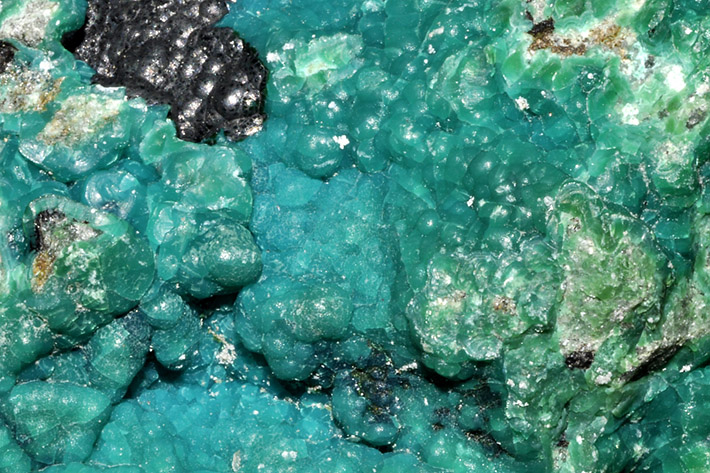 Chrysocolla has no cleavage. It is transparent to opaque. Its luster is variously described as vitreous, waxy, greasy, earthy or dull. Its fracture is sub-conchoidal to uneven. Its hardness is 2.5-3.5, but may rise to 7 if mixed with cryptocrystalline silica. Its streak is white to blue-green, and its density is 1.9-2.4.

The bright blue/blue-green color of chrysocolla may permit confusion with turquoise, a hydrated copper phosphate, or copper-bearing allophane, an aluminous hydrated clay.

Chrysocolla is generally found in association with most of the primary copper ore minerals: bornite, tetrahedrite and chalcopyrite. It is often associated with azurite, cuprite, atacamite, halloysite, limonite, malachite, nontronite, quartz, tenorite and many rare secondary copper minerals. Chrysocolla is known to pseudomorph after azurite. 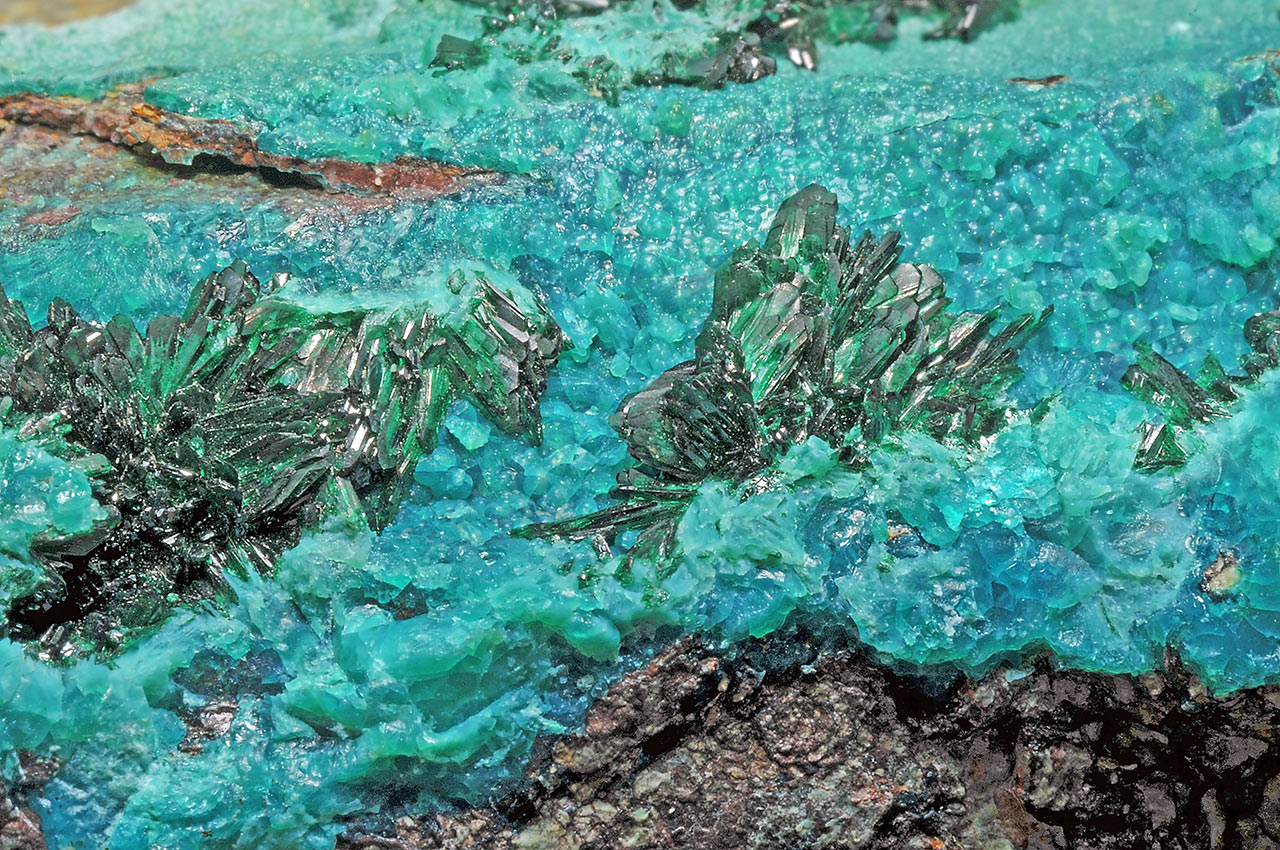 The mineral name derives from the Greek chrysos kolla (gold glue), a reference to its pre-Roman use as a solder to join gold pieces, a first use attributed to Theophrastus in 315 BCE.

André-Jean-François-Marie Brochant de Villiers, a French mineralogist, resurrected the name in 1808. Brochant de Villiers was the first student admitted to the Ecole des Mines in 1794, and carried out several distinguished careers as a full professor at the same university, the Inspector General of Mines, and the supervisor of the compilation of the first geologic map of France.

Bisbeeite is an informal name, derived from the Bisbee Mine in Cochise County, Arizona.

Chrysocolla is a common product of weathering or secondary oxidation of primary copper minerals - chalcopyrite, tetrahedrite and bornite. However, the occurrence of chrysocolla is more typical for the dry environment of deserts. Such localities are usually much more alkaline and copper silicates occur more commonly. 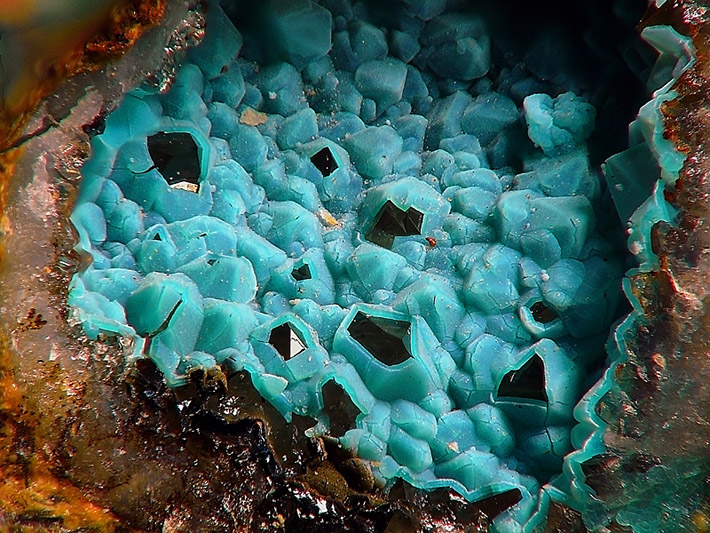 Chrysocolla has no specific industrial use except as an incidental ore of copper.

As a gemstone, its value and usefulness in jewelry depends enormously on its intrinsic hardness. If naturally mixed with cryptocrystalline silica gel, the specimens can be shaped and fashioned into popular jewelry stones. If not, the softness of the specimen limits its appeal to observational admiration. 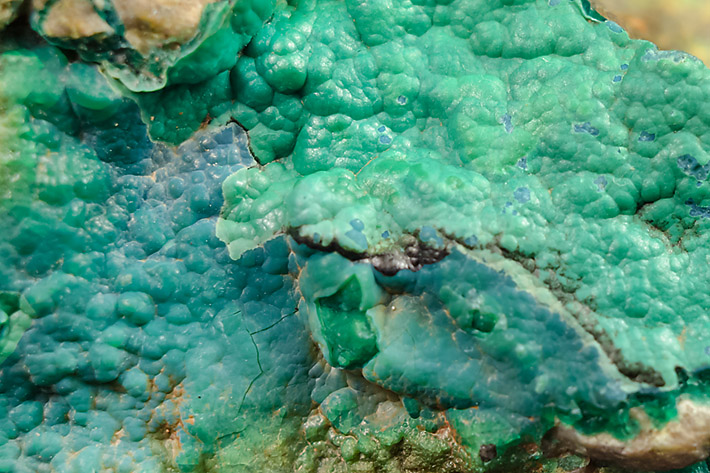 In Russia, the Nizhnyi-Tagilsk complex in the Ural Mountains is well-known for its abundance of good chrysocolla specimens.

In Slovakia, pride of place belongs to Banska Bystrica (Libethen, near Neusohl).

In Israel, the historic King Solomon Mine at Timna is a well-known producer.

In the Democratic Republic of Congo, good specimens have been discovered at Likasi and Kakanda, Katanga Province and at the Star of the Congo Mine, Lubumbashi. 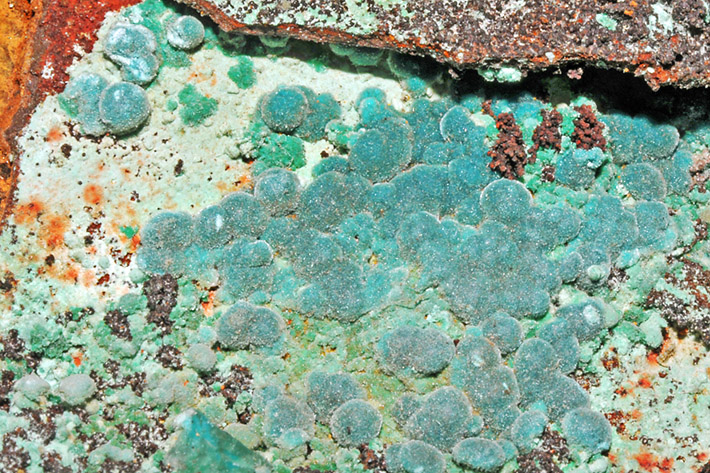 In Australia, the Chillagoe District, Queensland is the major producer.

Arizona is predictably known for numerous chrysocolla occurrences, owing to the abundance of large, well-developed porphyry copper deposits. The most prolific sites have been at the Bisbee Mine in Cochise County, the Morenci Mine in Greenlee County, the Globe-Miami District in Gila County, and the San Manuel and Ray Mines in Pinal County.

Lesser U.S. occurrences are in New Mexico at the Santa Rita Mine, Grant County and in Utah at the Tintic District, Juab County.