Siderite is both an iron ore and gangue mineral. Its principal economic value lies in its high iron content and the absence of process contaminants such as sulfur or phosphorous. It is part of a large group of isomorphous minerals, the calcite group carbonates, which share similar physical properties, and rhombohedral crystal form.

It is often present in hydrothermal veins as a gangue mineral, which forms nice crystals and clusters together with Pb-Zn-Cu ores. Such mineral specimens are especially attractive for mineral collectors.

Wilhelm Karl von Haidinger is credited with naming siderite in 1845 from the Greek word for iron - sideros. Siderite achieved gradual acceptance as a valid mineral species over a period of more than 100 years.

Siderite chemical formula is FeCO3, its a simple iron (II) carbonate. Siderite has the trigonal crystal symmetry, usually crystallizing as rhombohedra. The crystals typically occur with curved faces, sometimes resulting in the form of lens-shaped or bladed crystals. The specimens are also well-known for exhibiting saddle shapes. As is true of so many other mineral species, siderite can be found with every conceivable expression: oolitic, grainy, radial, nodular, stalactitic, botryoidal, massive, and mammilary. Concretionary forms result from siderite's common habit of pseudomorphing fossilized plant and animal materials in sediments. 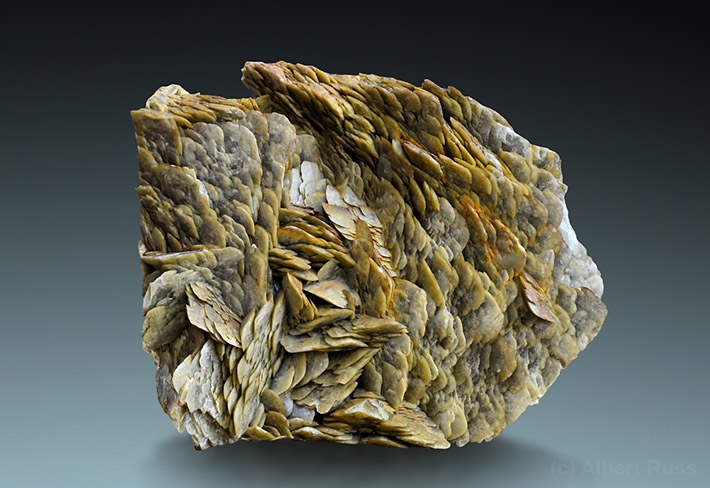 Siderite is a member of calcite group minerals, which have a similar structure and form several solid-solution series. The miscibility of the calcite group members is limited though. Of the several possible members of the solid-solution series associated with siderite (FeCO3), only the smithsonite (ZnCO3), magnesite (MgCO3) and rhodochrosite (MnCO3) varieties are common. Divalent calcium cation Ca2+ in calcite is larger than Fe2+ cation in siderite and does not enter the siderite structure easily.

Siderite displays a range of colors, from variegated yellows and greens through shades of brown. Black varieties are attributed to inclusion of manganese. Siderite can be very rarely transparent but most samples are translucent or opaque. 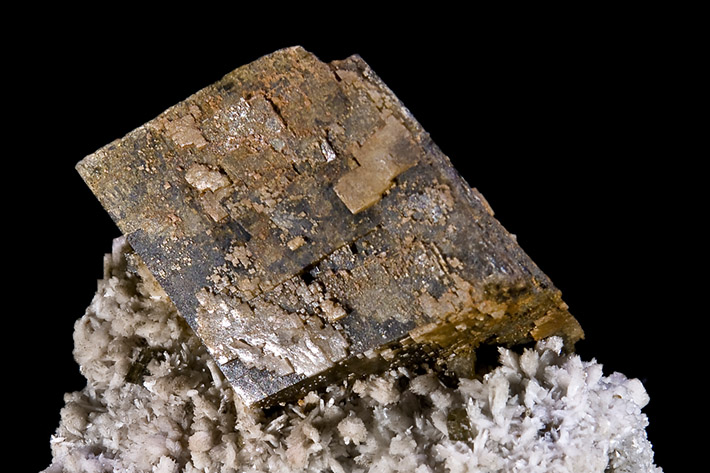 Siderite is quite similar to other rhombohedral carbonates. Unlike calcite, it doesn't fizz in the diluted hydrochloric acid. Calcite is rarely brown and it is much lighter than siderite. Dolomite and magnesite are mostly pale too and also much lighter then siderite. Ankerite is usually pale but turns into brown or brown-black when exposed to air. Slightly weathered ankerite crystals or crystalline aggregates can look exactly like siderite but mostly are very pale or white inside. Rhodochrosite is mostly pink but unfortunately brown varietes also exist. Smithsonite rarely forms nice crystals but some botryoidal masses also can be colored gray or brown.

Sometimes it is not possible to distinguish siderite from ankerite, rhodochrosite, smithsonite or kutnohorite without advanced analytical methods. 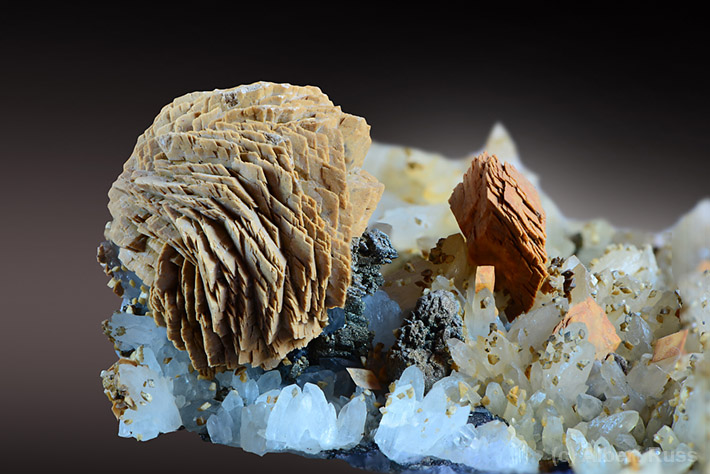 Unusual crystal shapes have given rise to distinctive names:

Clay Ironstone (aka Pelosiderite) refers to concretionary and sedimentary varieties of siderite, often mixed with various amount of clay minerals.

Oligonite (aka Oligon Spar) is a manganese-rich variety, still containing a predominance of iron over manganese.

Sideroplesite (aka Magniosiderite) is a magnesium-rich variety, containing a predominance of iron over magnesium.

Siderite is found in a wide variety of hydrothermal, metasomatic and sedimentary settings. It is a common mineral in sedimentary iron deposits or in metamorphic iron formations. Rarely as a primary magmatic mineral in carbonatites, syenites or pegmatites. Siderite is also rarely resent in some alpine type veins.

In the hydrothermal veins, it is commonly associated with quartz, baryte, calcite and fluorite. Aesthetic combinations of siderite with sulfides like galena, sphalerite, chalcopyrite, tetrahedrite or arsenopyrite are highly valued by collectors.

Large-scale Fe metasomatism can sometimes change dolomites into huge deposits of massive siderite. Such metasomatic deposits might have a network of genetically related hydrothermal veins, which are spreading far into the country rocks. 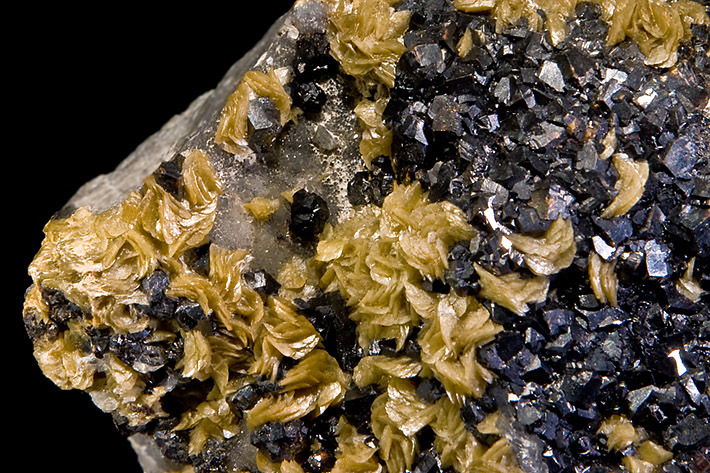 In the sedimentary enviroment, its occurrence is far more interesting. As concretions in shales and sandstones, siderite can form 3-D casts of preserved fossils of flora and fauna. The fact that the customary sedimentary association is with shales, clays and coal seams leads investigators to conclude that the burial setting of concretionary siderite (sphaerosiderite) is typically a low-oxygen, low-pH environment. In addition, since it seems to crystallize as pseudomorphs at shallow burial depths, its isotopic composition is treated as a reflection of the isotopic composition of the meteoric water in contact at the time of (burial) diagenesis.

Concretions of siderite (aka pelosiderite) in coal deposits may contain fissures filled with other minerals like ankerite, pyrite, marcasite or rarely millerite.

The two principal applications of siderite are as natural pigment and iron ore. It is also a less popular mineral specimen, despite the fact that it can produce very aesthetic crystals. Siderite clusters combined with calcite, quartz and sulfide crystals are highly valued. Very rare transparent crystals can be polished into gems, which are unfortunately very soft and brittle.

Although carbonate iron ore - like siderite - has been economically important for steel production, that is truer for Europe than for North America, where vast fields of accessible hematite supply the continent's steel-making needs.

Hydrothermal occurrences in Europe often lie in small lenses of ore in steeply dipping veins, precluding their extraction from open pits; they must be accessed by underground horizontal stopes, which necessarily involve repeated and inefficient relocations of the access points and mining equipment. 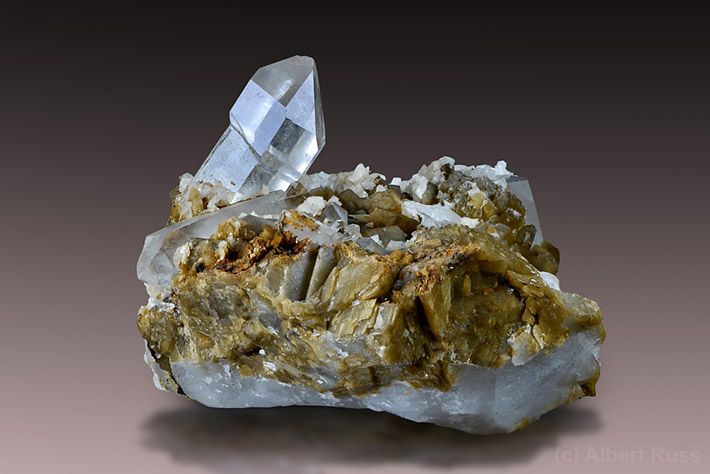 Smelting and recovery of carbonate ore are more difficult than that for oxide ore, requiring multiple steps of preheating (to remove carbonate as carbon dioxide) before the ore can be processed in a blast furnace. Manganese and phosphorous content also affect the ease of smelting. While most furnace processes could handle elevated manganese content, processing ores containing phosphorous posed problems in steel-making, which were solved by ersatz solutions, none of which achieved longevity. Blast furnaces were serially modified with acid, then basic liners; heating times were extended; additives were reformulated to replace lost elements and ore sources were changed. All of these interventions permitted the cyclical production of steel from siderite, but over time the strength of the siderite mining sector declined. Modern large scale mining of magnetite and hematite from open pit mines is far more productive and produces much better oxide ores for smelting.

Siderite (and related oxides) are such obvious likely sources of pigment, for personal adornment and artistic applications, that it is somewhat surprising that there are few historical documents referencing its use, even thoug one suspects that it must have been in use and as available as any other powdered material accessible on the surface of the Earth. Of course, pure fresh siderite is not a very good pigment. But the weathered outcrops of siderite are covered by reddish-brown limonite. Siderite can also be easily crushed and decomposed into mixture of iron oxide pigments in fire. 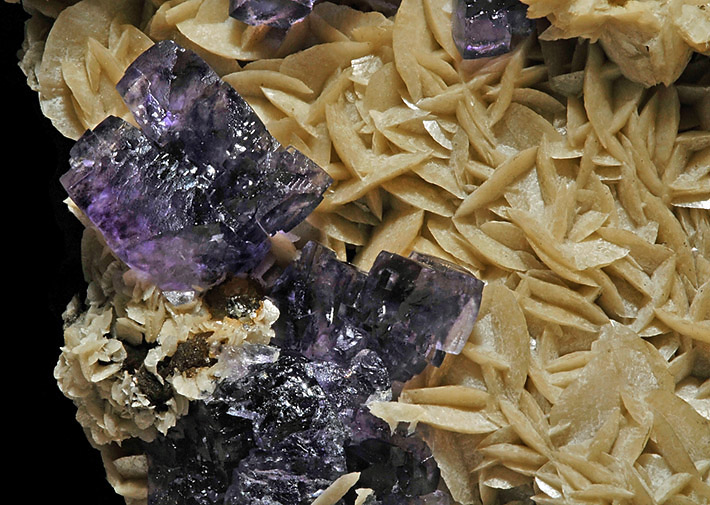 A major current commercial source of siderite pigment is the Kaluzhskaia province of Russia.

European localities of nice hydrothermal siderite specimens include Neudorf (Harz Mountains) in Germany; Panasqueira and Baixa, Portugal; Isere and Lorraine, France; Kapnik and Turt Mines, Romania; Pribram, Czech Republic; and the Carn Brea area in Cornwall, England. Big metasomatic deposits of siderite - accompanied by hydrothermal veins with great siderite crystals - are in Rudnany, Dobsina, Bindt, Gretla and many other sites in Slovakia. Greenland contains an occurrence of siderite associated with the rare mineral cryolite in Ivigtut. Pelosiderite concretions with ankerite, pyrite and rare millerite were found in Kladno, Czech Republic. 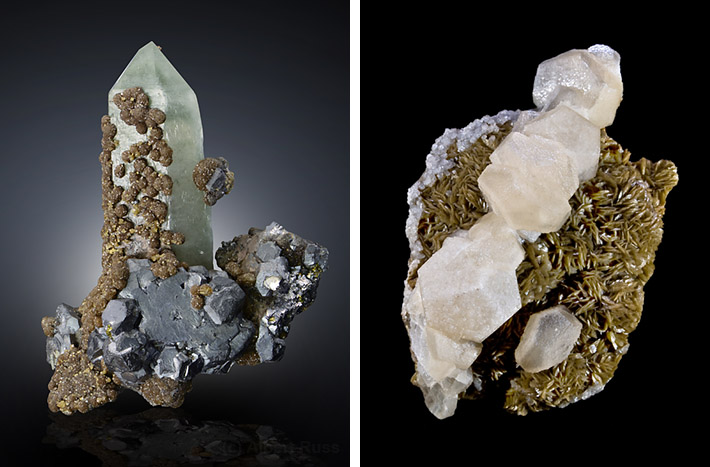 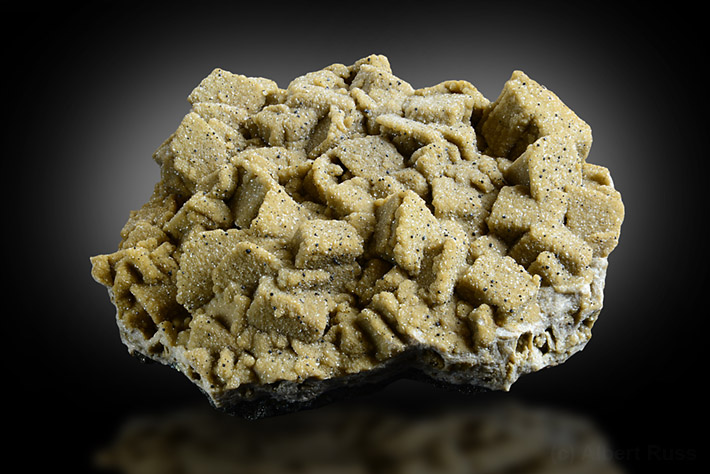 Africa's well-known locality is Tsumeb, Otavi, Namibia. South Africa is the home of superb pseudomorphs after calcite at Aggeneys, in the Northern Cape Province. Australia has occurrences at Broken Hill, New South Wales. China is noted for abundant platy crystals at the Yaogangxian Mine, Hunan Province and great siderite clusters with chalcopyrite and tetrahedrite from Kaiwu Mine, Guizhou Province. Russia is home to odd, ball-shaped masses at Dal'negorsk, Primorskiy Kray.