Rhodochrosite is a manganese carbonate. Its value now resides almost entirely in the quality of its hot pink and deep red specimens, which are sought after by collectors and command extremely high prices.

Specimens from 13th century Inca mines in Argentina are the origin of one of the more alluring names for the mineral, Inca Rose. According to folklore, the rhodochrosite is the solidified blood of their ancestors.

Rhodochrosite is a member of the trigonal system. Rhodochrosite forms a natural solid solution series between rhodochrosite MnCO3 and siderite FeCO3, with intermediate cation substitutions involving Mg, Ca, Zn and Co. All members of this family, referred to as the calcite group, exhibit strong double refraction. 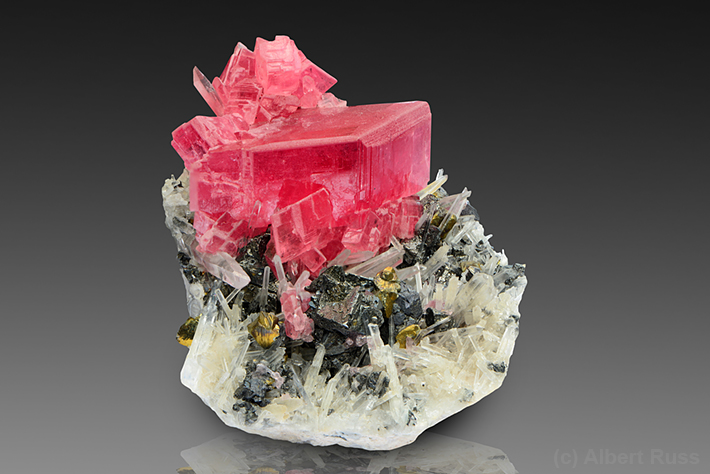 Its crystalline forms are usually rhombohedral, with perfect cleavage, or scalenohedral in parallel bundles. Other described occurrences are botryoidal (grape-like), radiating, massive, grainy or stalactitic.

The color of rhodochrosite ranges from light pink to pinkish red to hot pink to rose to bright red to orange red, and rarely brown or yellowish gray. Fluorescent red is a known, but rare, color. The mineral is pearly and vitreous, variable in hardness (3.0-4.0), with a white streak and a density between 3.3 and 3.6. By weight, rhodochrosite is 61.71 % MnO and 38.29 % CO2. 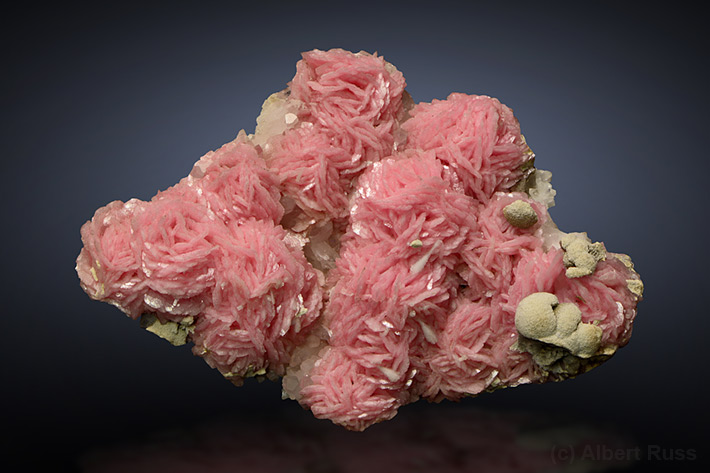 Rhodochrosite was named in 1813 by Johann Friedrich Ludwig Hausmann. The name derives from the Greek rhodon (rose) chroma (color). Descriptive names include Inca Rose, Raspberry Spar and Manganese Spar. Three other variants are rosinca, a stalactite variety and capillitite, a yellow-gray banded Fe-Zn variety, both found at Capillitas, Catamarca, Argentina. 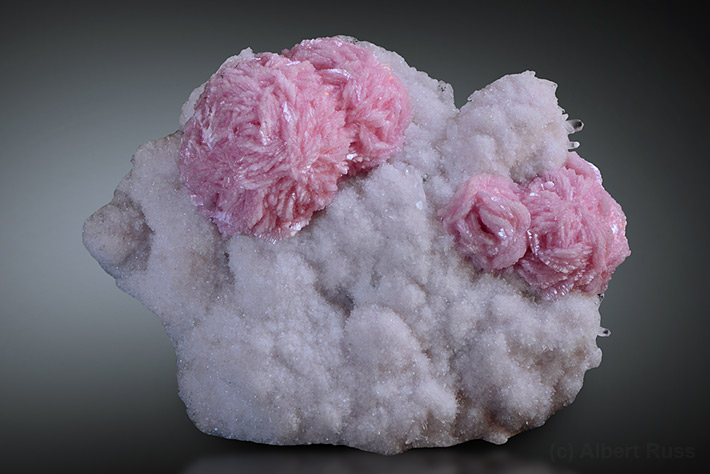 Rhodochrosite is sometimes confused with its sister stone, rhodonite, a manganese silicate [(Mn,Fe,Mg,Ca)SiO3], because the manganese imparts a rose color to it as well. Its hardness alone, 5.5-6.0, coupled with black manganese veining, easily distinguishes rhodonite from rhodochrosite, whose veining or banding is generally white.

Manganese ores in a carbonate environment are the usual progenitors of rhodochrosite. In and of itself, it is not normally an ore mineral, but rather a primary gangue (associated) mineral in low-temperature hydrothermal veins, an accessory in high-temperature replacement deposits, or as an accompaniment to sedimentary manganese accumulations. Rhodochrosite also rarely accompanies late-stage hydrothermal crystallization in pegmatites generated from lithophile (silicate rich) melts. 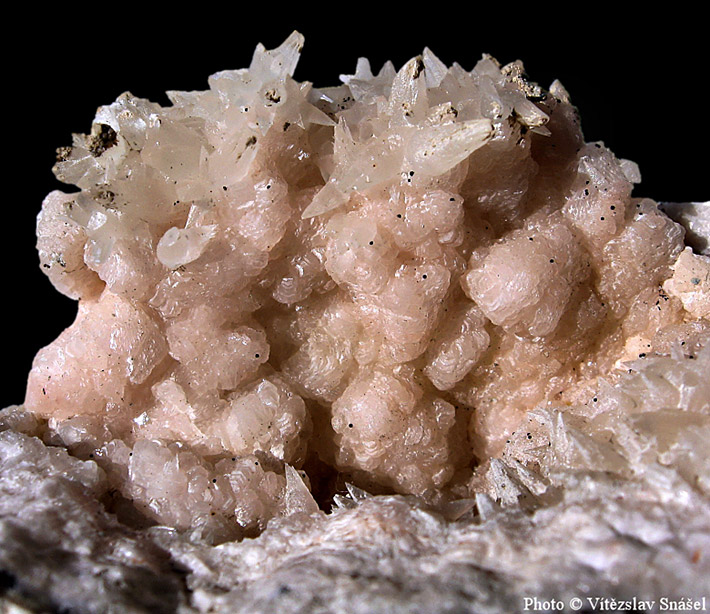 Rhodochrosite has a very minor level of industrial use. It is applied to the manufacture of some low-cost stainless steel and a limited number of aluminum alloys. It can be used as a nutritional supplement in agriculture; as a tinting agent in porcelain glaze; and as a rose stain to impart color to decorative concrete. 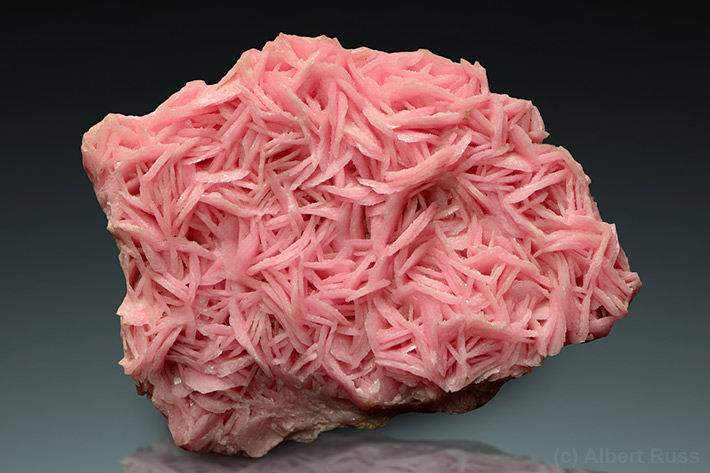 Historically, rhodochrosite was encountered in the mining of silver ores, and was routinely discarded on mine dumps because the contained manganese was destructive to the amalgamation processes used to recover silver. Rhodochrosite did not acquire its present value until high-quality specimens were discovered and recognized for their phenomenal beauty. 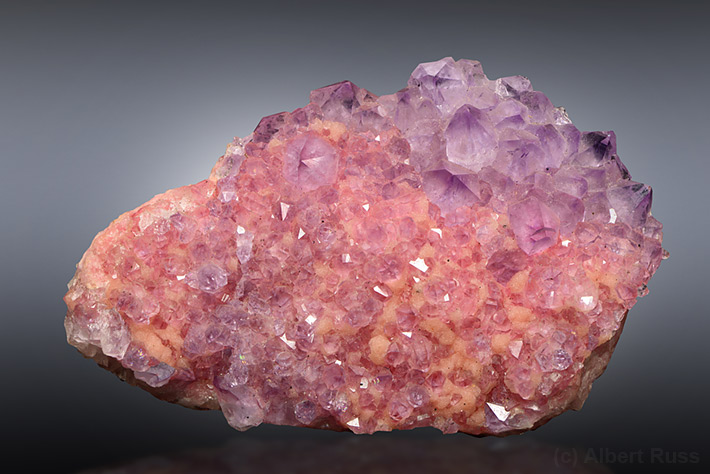 High-quality finds are typically treated as stand-alone objects of beauty, and are ordinarily carved into ornaments, figures or jewelry beads, slabbed as display objects, or faceted as gemstones. It is softer than almost all other gemstones except pearl, a quality which does not make it suitable for commonly-worn objects, so lower-quality finds are normally incorporated as accessory material in gold and silver jewelry, where softness will not be a disadvantage.

Rhodochrosite was first described from silver mines in Romania, both Cavnic and Sacaramb mines are cited as the first source. Several other sites came to prominence, as spectacular occurrences were discovered elsewhere. Although rhodochrosite is present in a wide variety of localities, superb specimens are uncommon. That is why deeply colored specimens, especially from Argentina, South Africa and Colorado are so highly prized. 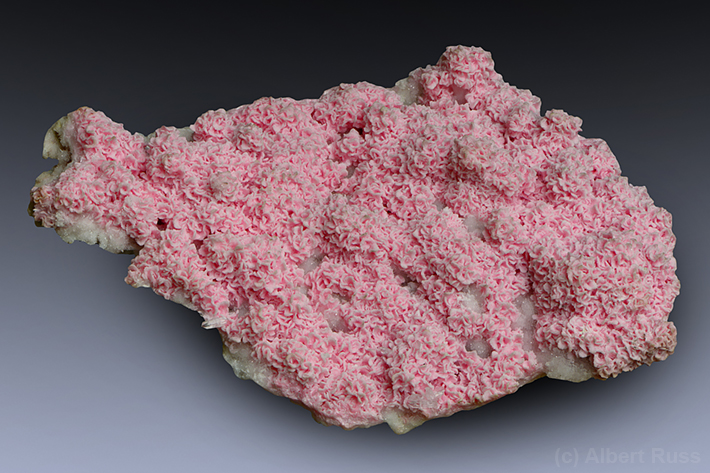 The Argentine specimens occur as both banded and stalactite-stalagmite pairs. The stalactitic varieties seem to have originated in 13th century Inca mines, where water dripping from abandoned manganese-rich mine tunnels precipitated and created exquisite columns exhibiting concentric growth layers. Collectors prize these specimens in their polished and slabbed state, especially when the stalactites and stalagmites are sliced in cross-section to display the concentric growth rings. 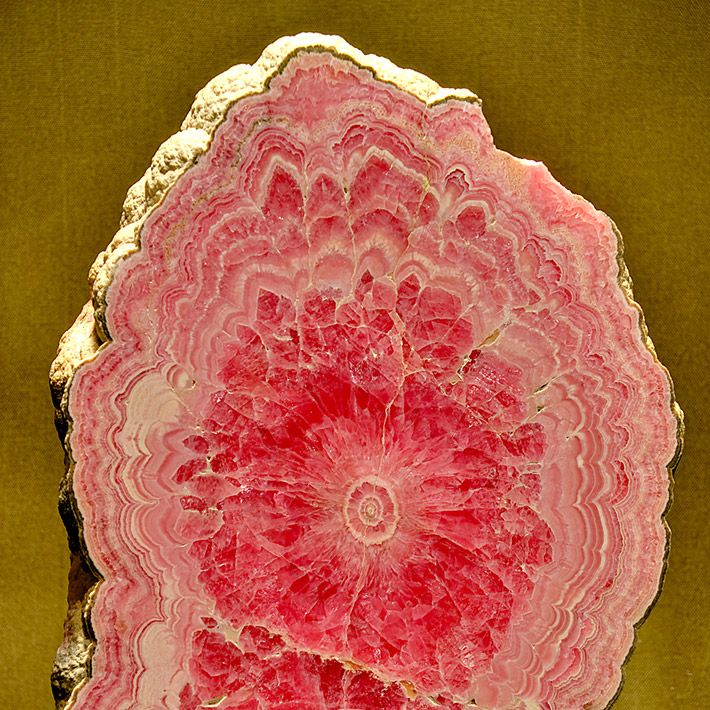 By far, the most celebrated find is the output from the Sweet Home Mine in southwest Colorado. It had produced specimens since its opening in 1872, but superior examples did not appear until the 1960s. In 1992, the mine yielded the 15 cm crystal (the Alma King), the single largest crystal discovered so far. As a direct result of that discovery, students at the local Bailey Creek High School succeeded in petitioning the Colorado state legislature to make rhodochrosite the State Mineral of Colorado. 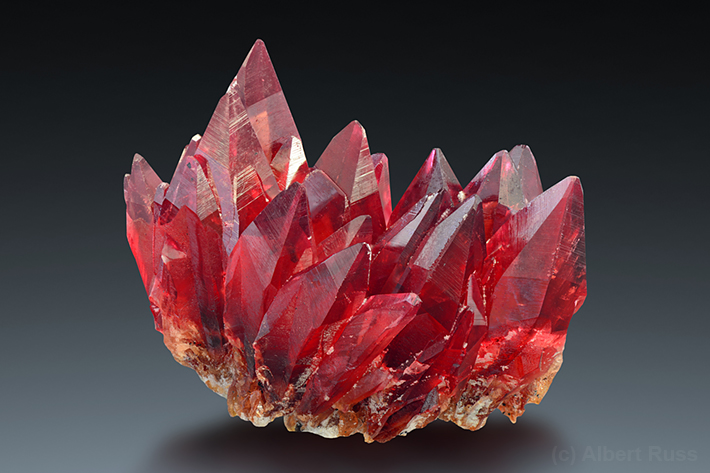 The intriguing back-story behind the discovery of the Alma King is that it resulted from a persistent belief - proven true - that early 20th century miners had recklessly discarded rhodochrosite on the mine dumps because of their antipathy towards allowing the amalgamation problems to interfere with silver recovery. Beginning in 1966, a series of investors acquired ownership rights to the mine, with a view towards re-examining the dumps for worthwhile discards. 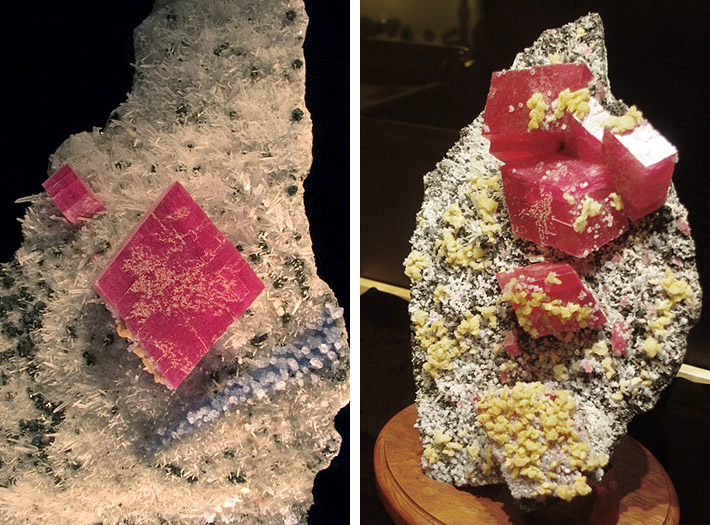 The first of them studied a 1920 mine map and identified a rhodochrosite seam on it. He reopened that tunnel, and made the initial several discoveries of large crystals, some of which are now displayed in American museums. In subsequent years, more small finds in productive pockets were added to the inventory, but were too difficult to recover without damage. In 1991, a new syndicate formed with a quarter-million-dollar war chest to rehabilitate the mine and put it back in production. The following year saw the Alma King discovery, now on display at the Denver Museum of Natural History. 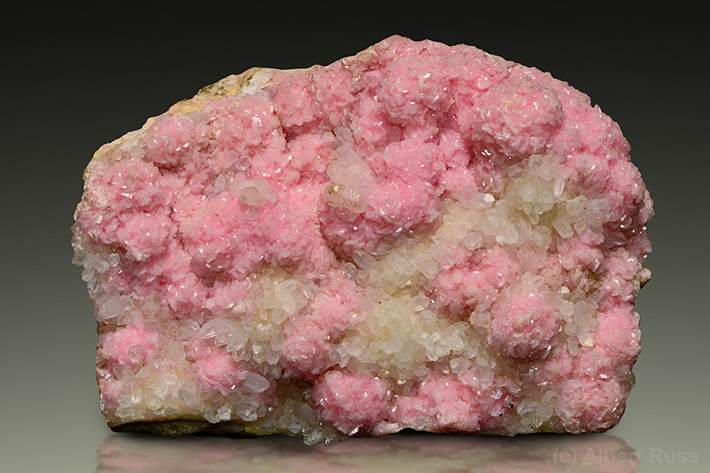 Banská Štiavnica in Slovakia produced some decent and highly priced rhodochrosites in the past, quite similar to some specimens from Romania. Krásno in Czech Republic produced combinations of deep pink rhodochrosite with rare yellow carpholite. 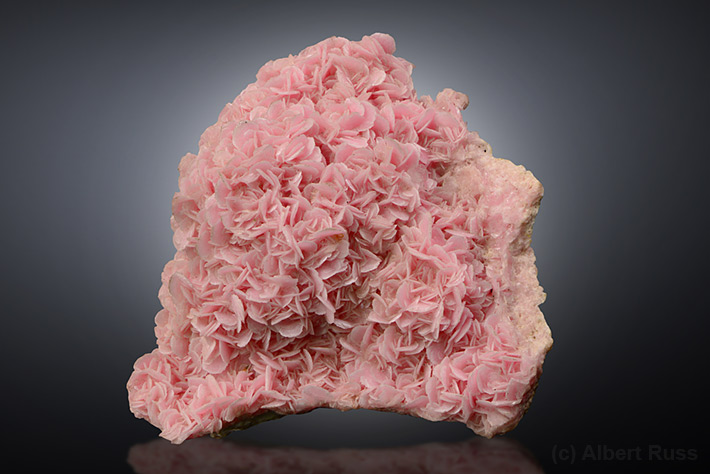 In addition to the three classic localities, new suppliers have appeared. China is supplying outstanding specimens of large crystals from the Wutong Mine, Guangxi Zhuang. Japan is producing banded rhodochrosite from the Inakuraishi Mine, Shiribeshi Province and Oppu Mine, Nishimeya. Surprisingly, sites on the Kerch Peninsula in the Crimea, Ukraine have revealed pseudomorphs of rhodochrosite coating and replacing organic materials such as shells.