Dolomite is calcium magnesium carbonate, which can form outstanding crystals with wide variety of colors, often associated with other minerals. Less aesthetic dolomite rocks can build a whole mountain ranges.

Dolomite (or dolostone) is also used to refer to the sedimentary carbonate rock of the same composition. For clarity in this mineral summary, dolostone will be used to refer to the rock, which is ubiquitous, has an enormous number of uses, and occurs in accumulations large enough to mine. Dolostone rock is a mixture of dominant dolomite with minor calcite, quartz and clay minerals. 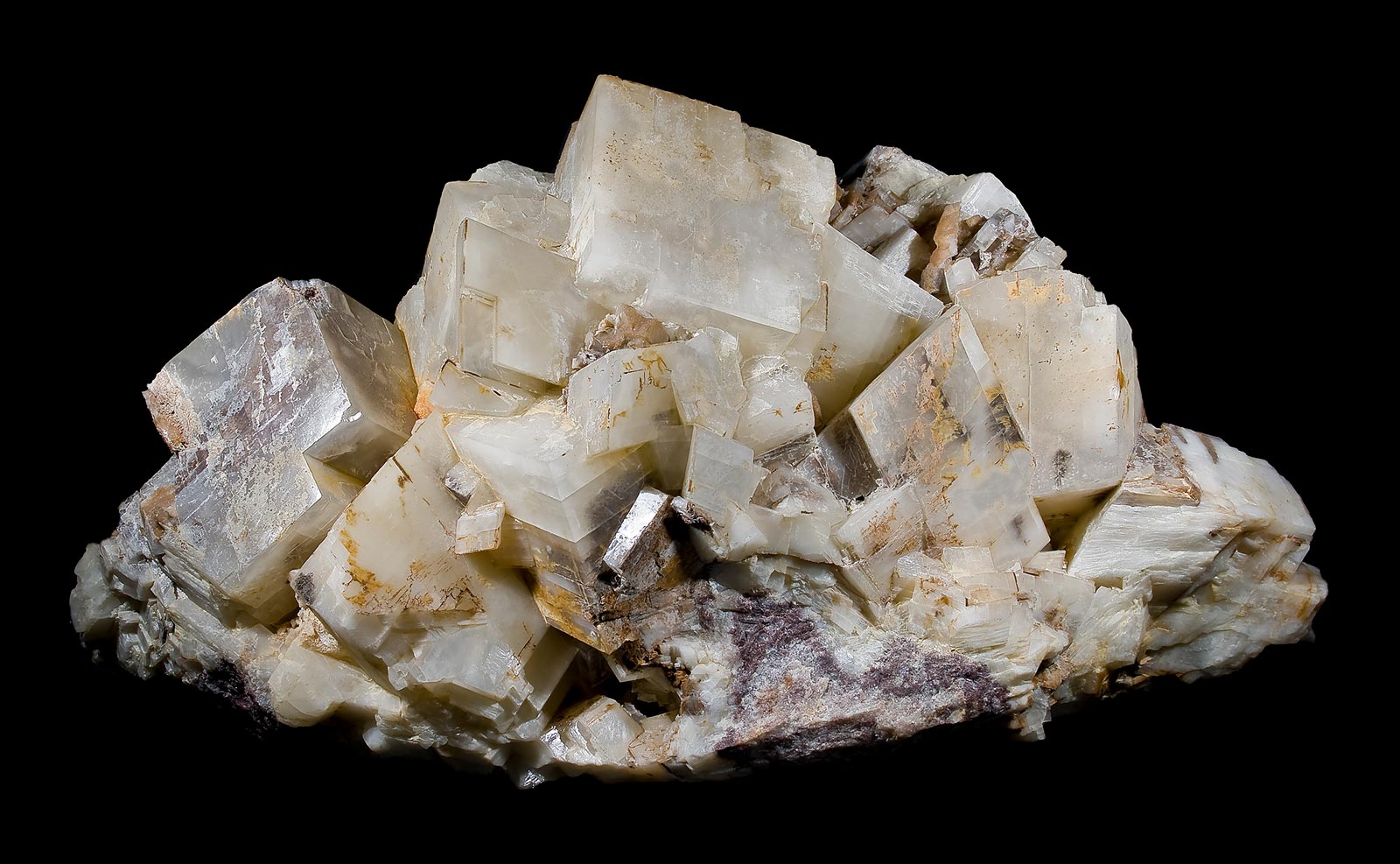 Dolomite is an anhydrous carbonate mineral composed of nominally equal parts calcium and magnesium, with the formula CaMg(CO3)2. Its chemical formula can be more clearly written as CaCO3.MgCO3. Because of the presence of two various cations, which form regular layers inside dolomite structure, dolomite crystal symmetry is lower than calcite.

Dolomite CaMg(CO3)2 is by far the most abundant mineral of the dolomite group. There are 4 other minerals in the group, which are isostructural with dolomite and form complete solid solutions:

Ankerite CaFe(CO3)2: occurs along with siderite, the iron carbonate, in sedimentary and metamorphosed carbonate iron-rich environments, as a diagenetic mineral, or as part of a hydrothermal system.

Kutnohorite CaMn(CO3)2: is a rare mineral, first described in 1901 in Kutná Hora, Czech Republic, but since found worldwide in small amounts.

Minrecordite CaZn(CO3)2: is a very rare mineral, first described from Tsumeb, Namibia, and namen in the honor of Mineralogical Record magazine.

Norsethite BaMg(CO3)2: is another rare mineral described from Westvaco Mine, Wyoming, USA. It mostly occurs in carbonatites, kimberlites and some exotic skarns.

Dolomite colors normally span the range from white to tan to gray, but often extend to reddish-white, brownish-white, pink, peach, yellow or orange. Elements other than Ca and Mg may impart unusual colors: Fe provides a yellow to brown caste; Mn creates a rosy pink. 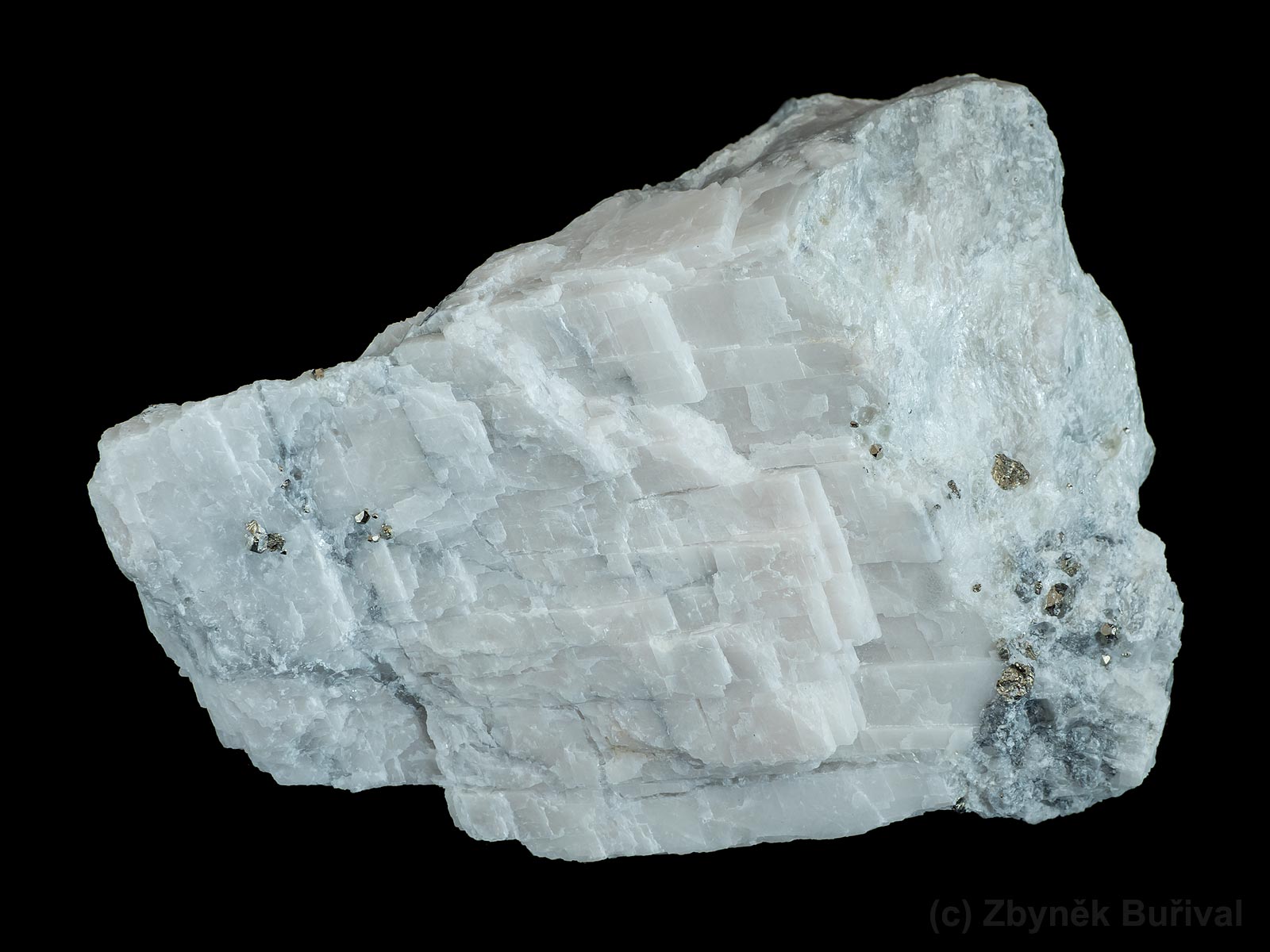 In the hydrothermal environment, deposits of copper, lead and zinc will easily form when hot metal-bearing solutions containing them precipitate due to a drop in pH upon encountering dolomite. 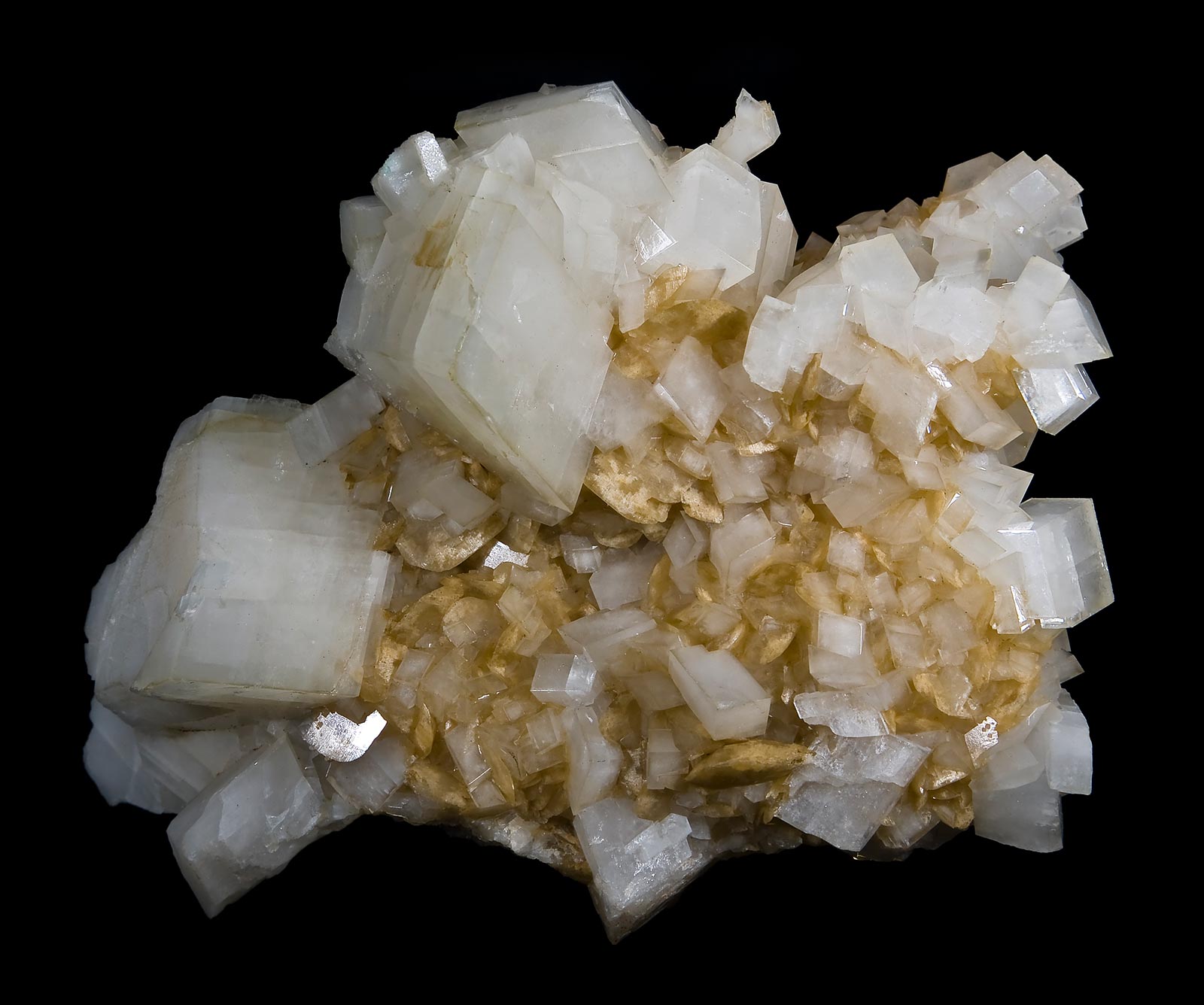 The earliest description of dolomite is attributed to Carl Linnaeus is 1768, but the first meaningful descriptions were presented by the French geologist Déodat Gratet de Dolomieu (1750-1801), who is known to have recorded them from buildings in Rome circa 1791, and collected samples from the Alps in northern Italy. Nicolas-Théodore de Saussure (1767- 1845), a Swiss chemist and pioneer in the study of photosynthesis, formally named the mineral after Dolomieu in the winter of 1791, and the area of his Alpine collections became known as the Dolomites. 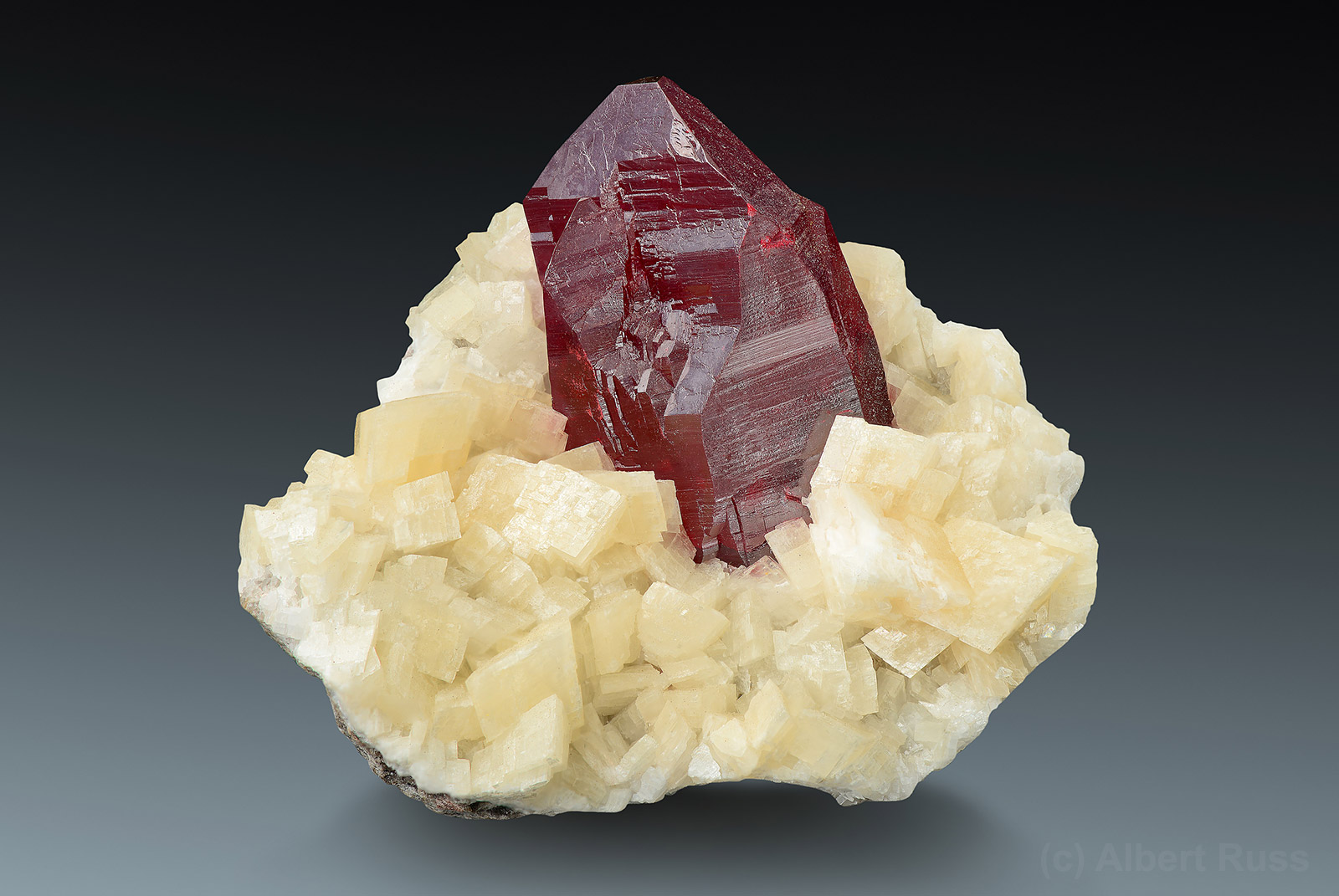 The geologic record displays a vast amount of accumulated dolostone, but its development in the recent and modern environment is unexpectedly rare. All of the observational and experimental situations in which a plausibly identifiable cause for sedimentary dolostone formation is possible seem to depend on the inferred presence of microbial activity.

In the realm of observed environments, dolostone seems to be restricted to:

• supersaturated saline lagoons, such as those along the coast of Brazil at Lagoa Vermelha and Brejo do Espinho; 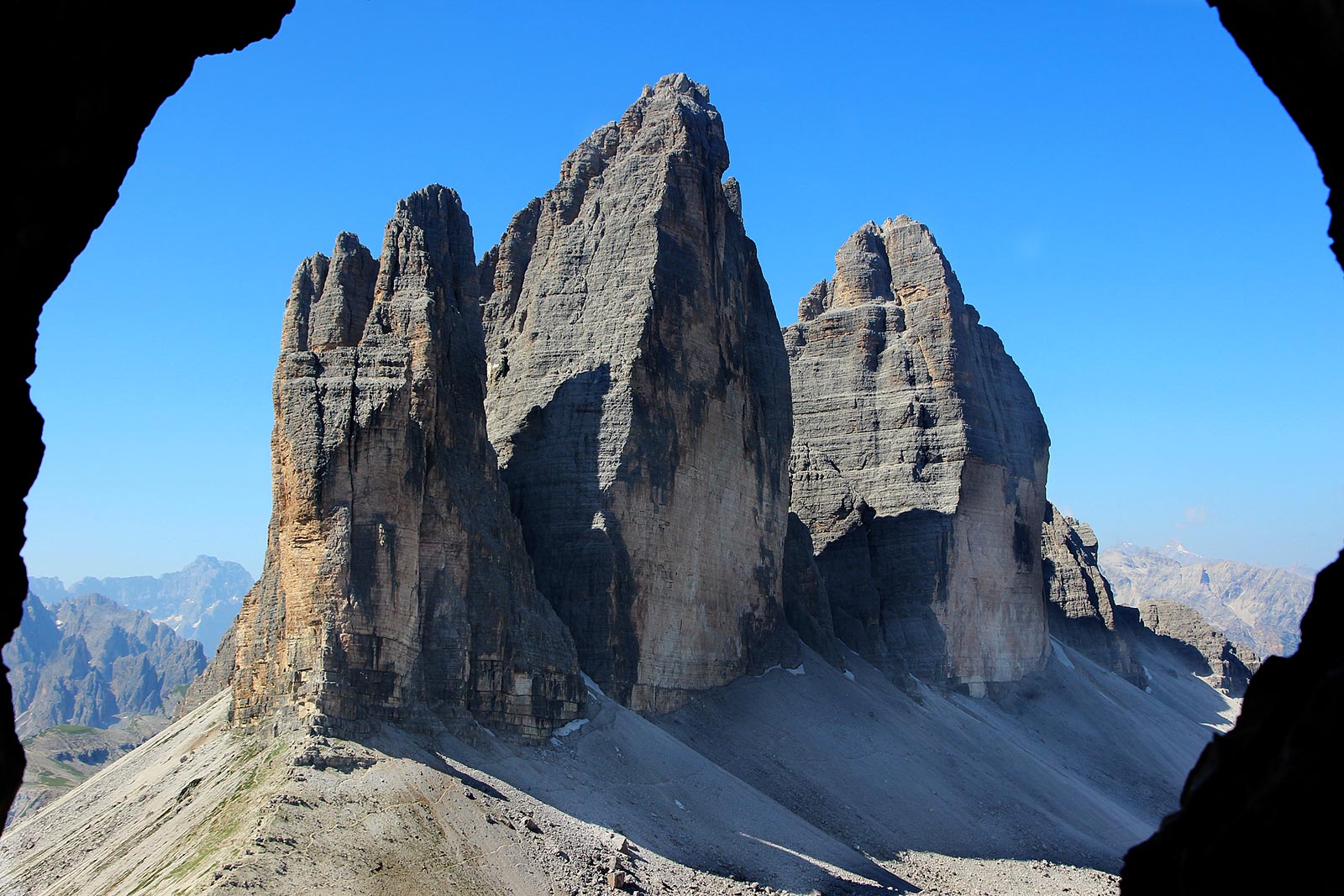 In the realm of experimental geochemistry, recent studies have succeeded in creating reproducible scenarios of low-temperature synthesis of dolomite + magnesite.

(1) For this to proceed, there must be a metastable high temperature precursor (between 60 and 220°C) such as an amorphous, magnesium-deficient calcium carbonate. It is allowed to cool through stages where

(2) it undergoes periods of dissolution and reprecipitation, first evolving to a proto-dolomite with an inferior Mg/Ca ratio,

(3) and finally transitions, over a longer timescale, to a new nucleation of highly crystalline stochiometric dolomite. 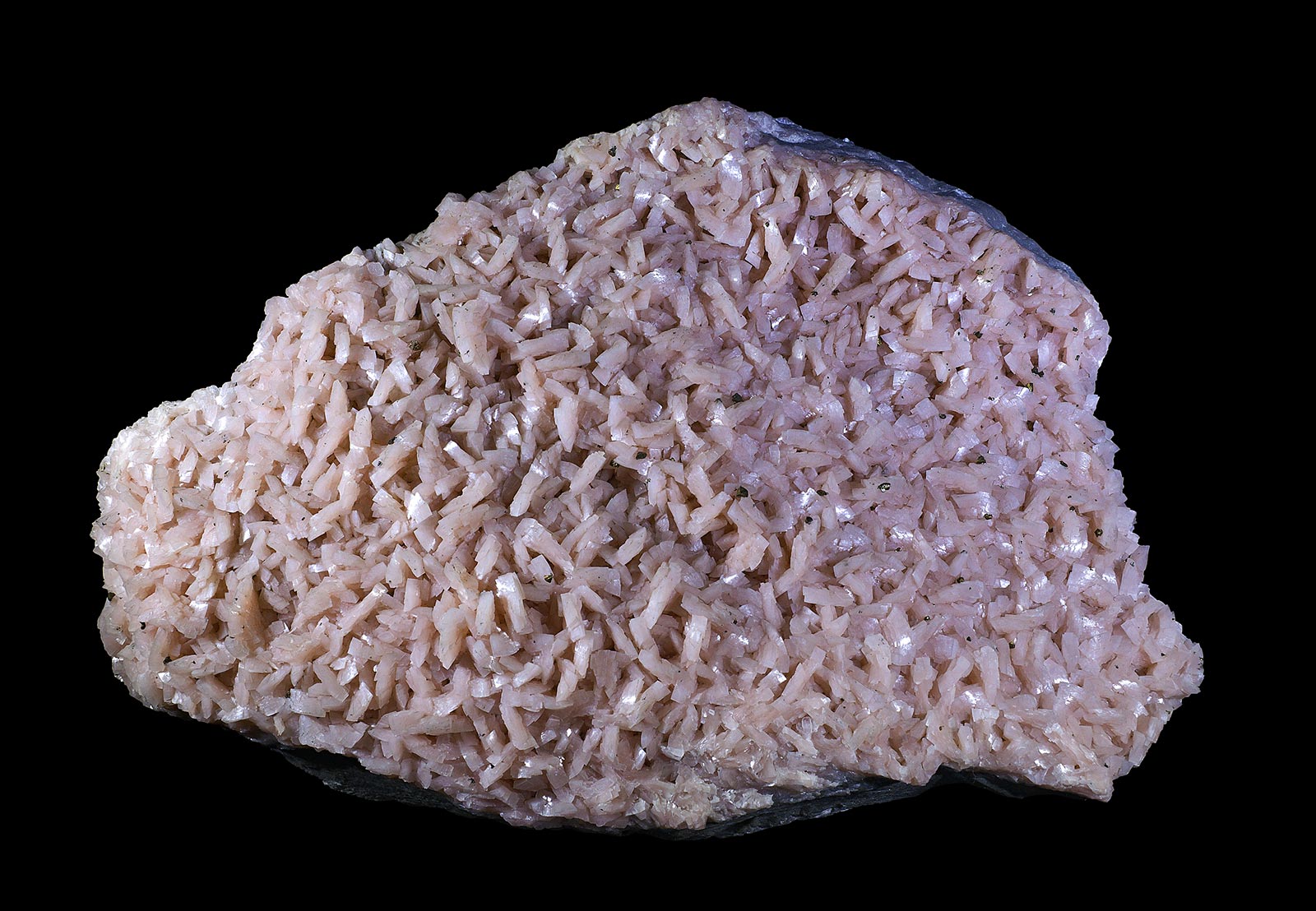 Dolomite is also often present in medium temperature hydrothermal veins with Pb-Zn sulfides, calcite, baryte and quartz. It can also form by larger metasomatic processes when fluids rich in Mg react with limestone and form large lenses or layers of crystalline dolomite.

Magmatic dolomite may form in the carbonatite rocks.

Dolomite per se is a mineral with very few uses. However, dolostone (which is basically monomineral dolomite rock with minor impurities) has an enormous number of uses because it occurs in deposits that are large enough to mine. Major uses of dolostone can be broadly broken down into these categories: 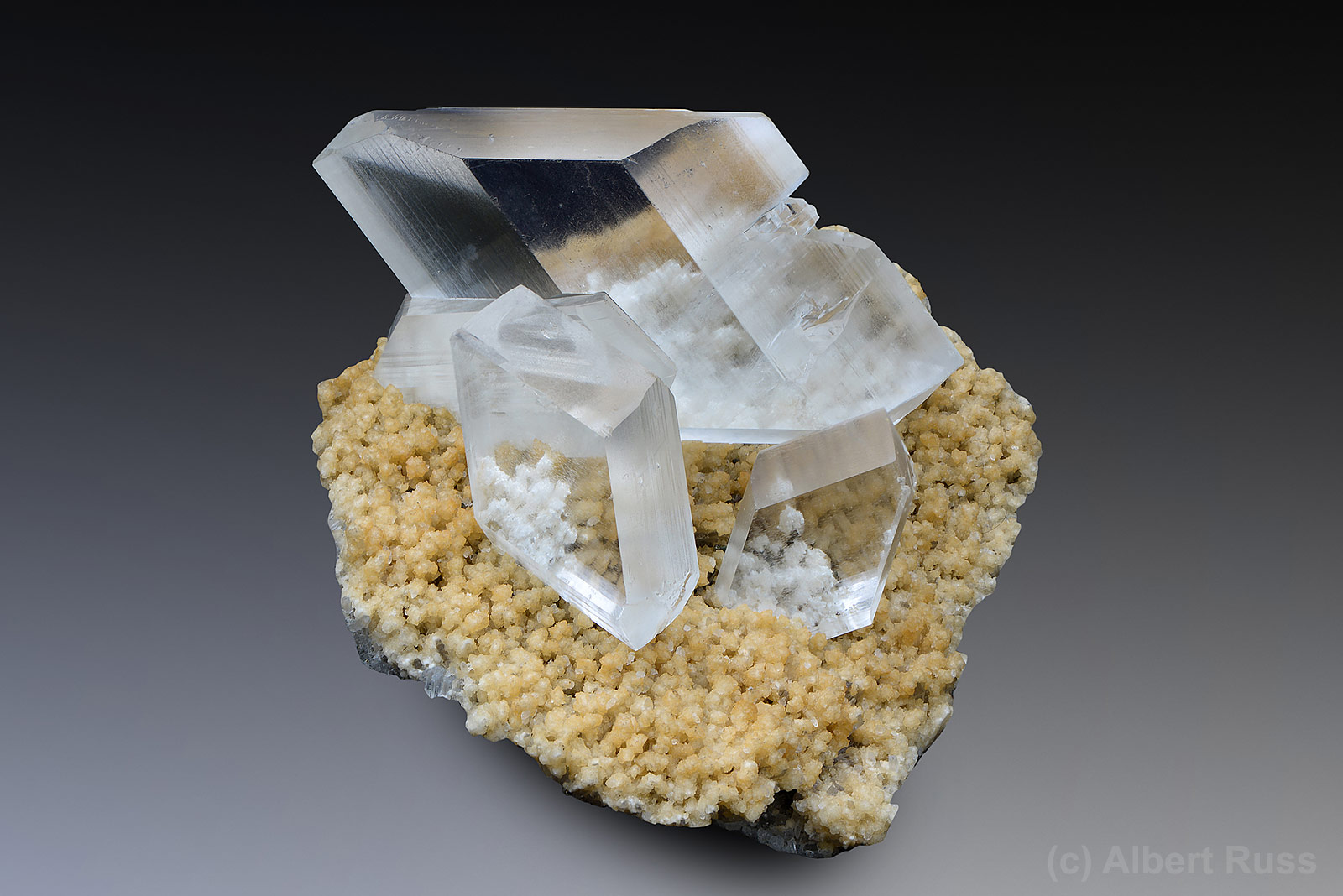 The construction industry uses dolostone as an ornamental stone (cut into blocks of specific size known as ‘dimension stone’); calcined and used as aggregate in manufacture of concrete, cement and asphalt; crushed and sized for use as road base, railroad ballast, rip-rap or fill.

The agricultural industry uses dolostone in horticulture and animal husbandry. Dolomite is added to soils and potting mixes as a magnesium supplement to condition and restore soils; to neutralize acids in soils and streams; and to buffer the substrate in marine (saltwater) aquariums to buffer pH changes in water. Dolomite is used as a feed supplement for livestock. 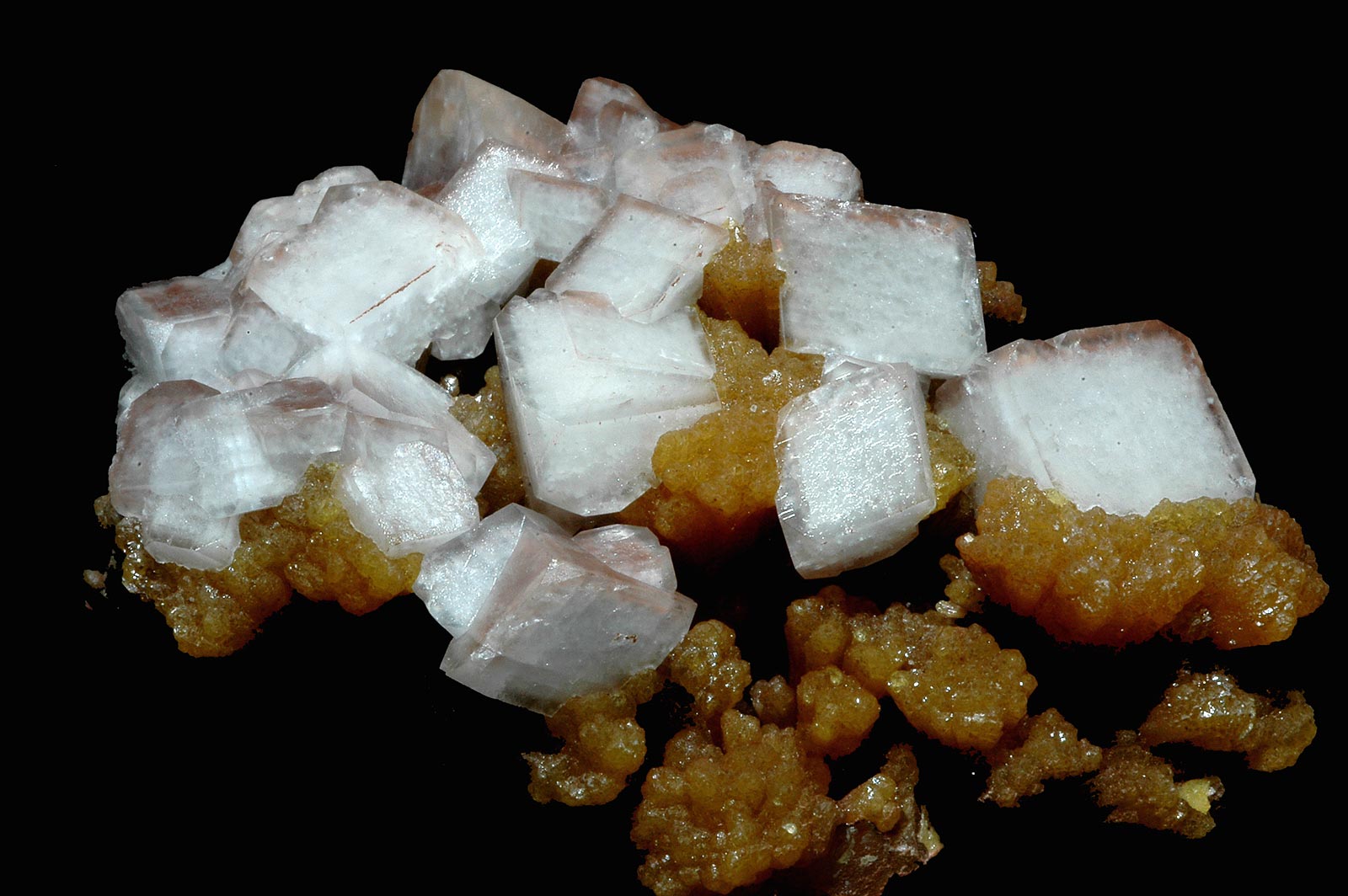 The manufacturing industry uses dolostone as a source of magnesium oxide to produce refined elemental magnesium (Mg) and magnesia (MgO); to use as a sintering agent and flux to smelt iron and steel, and produce float grass, bricks and ceramics; and to use as a catalyst to destroy tar during high-temperature gasification of biomass.

The extractive industries (petroleum and mining) depend on dolostone as reservoir rock. In the case of petroleum, dolostone serves as an ideal reservoir rock because a volume reduction occurs during the conversion of calcite to dolomite, creating pore space in the rock, permitting the trapping of oil and gas migrating from other rock units into the dolostone. In mining, large dolostone masses on the margins of sedimentary basins serve as ideal strata-bound traps for migrating Mississippi-Valley-type (MVT) deposits containing the principal base metals, copper, lead and zinc. 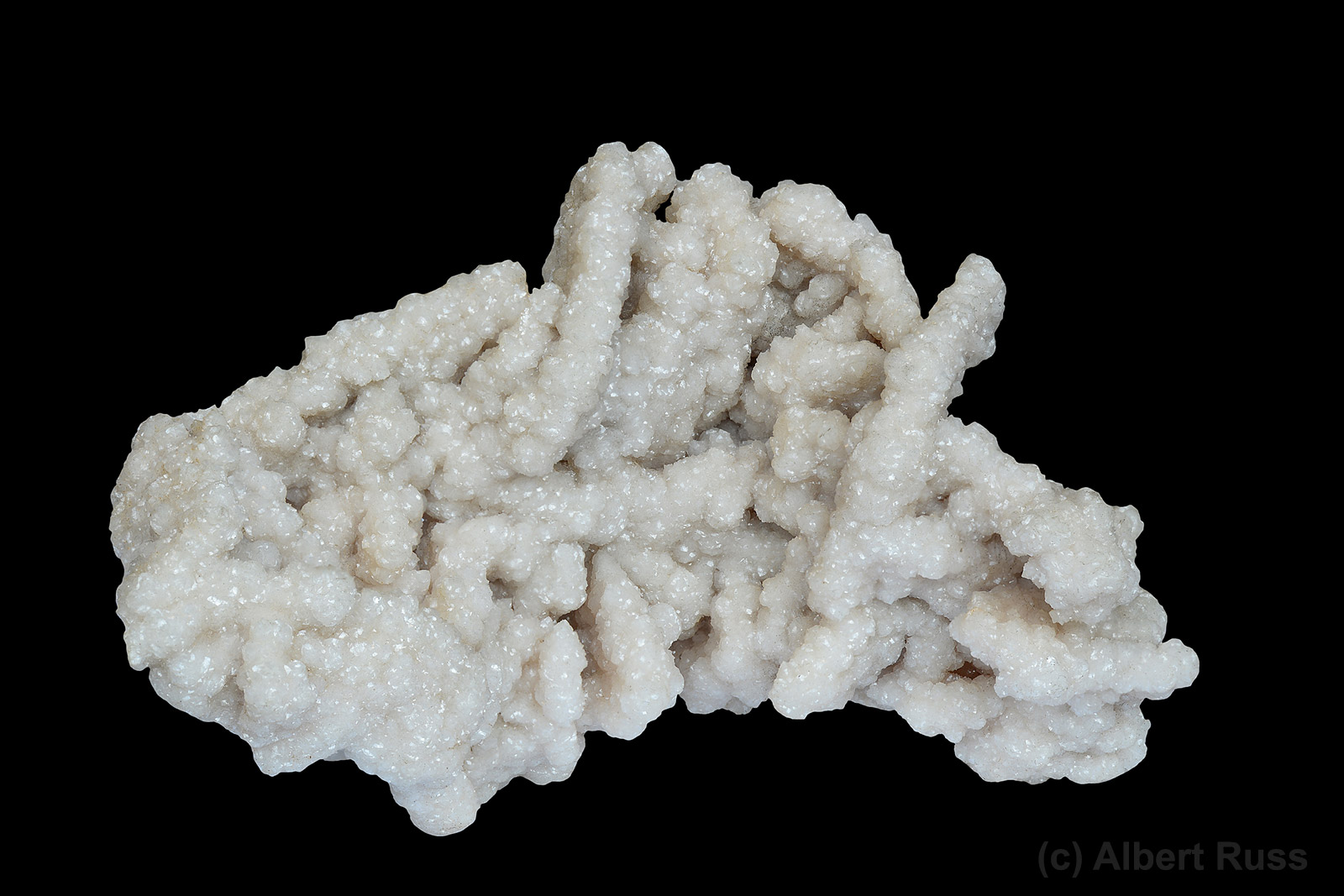 The scientific research industry uses layers of dolomite as insulation to shield particle detectors from unwanted background radiation and ordinary cosmic rays in the search for exotic particles.

Dolomite is a major rock-forming mineral with a worldwide distribution.

Two special localities for specimen collecting are in Spain, at a unique occurrence in Eugui, Navarra Province, with colorless transparent crystals resembling classic calcite, and in Congo, at Kolwezi, where popular cobalt-rich specimens are described as hot pink. 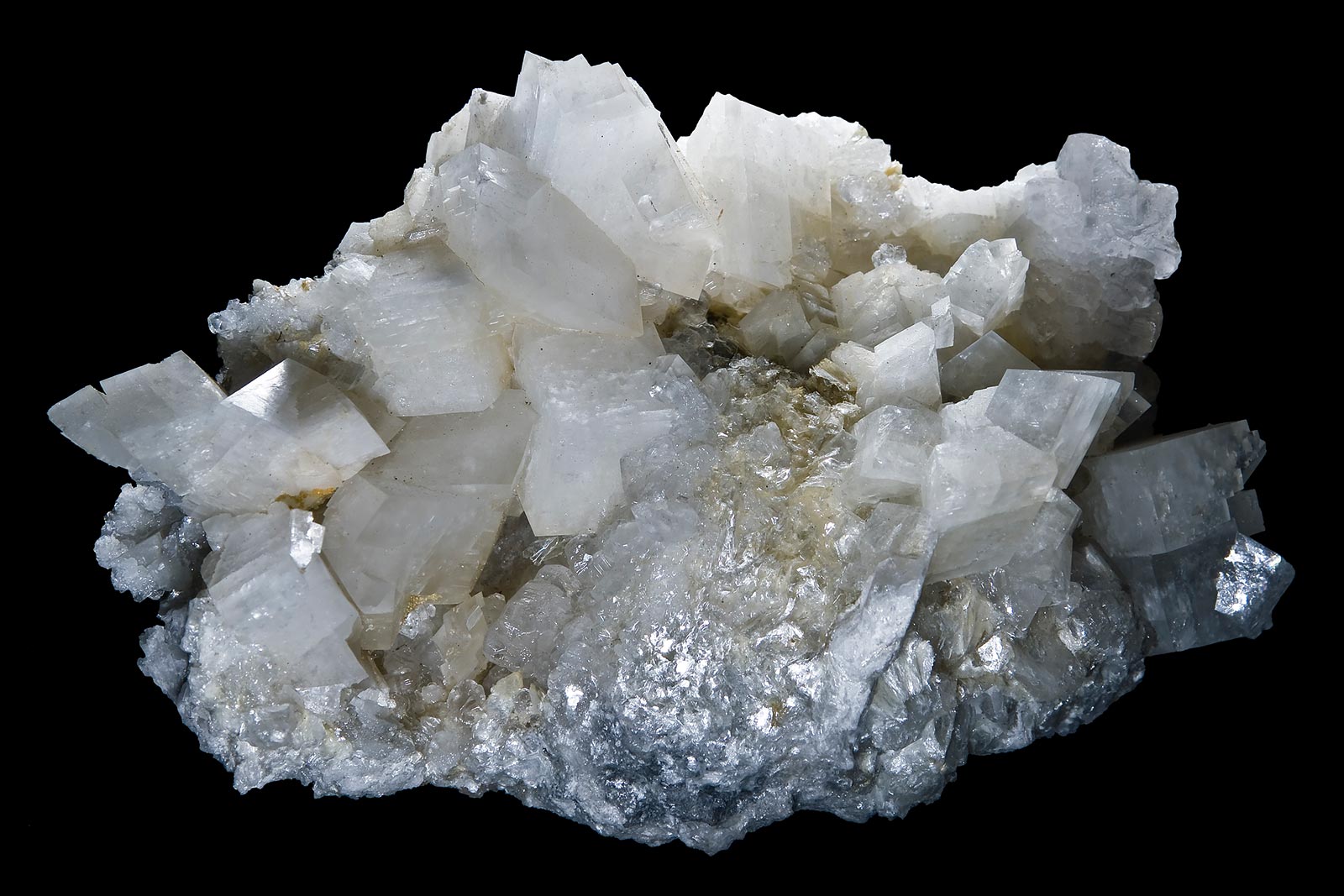 In Brazil, home of fine crystals from Brumado, Bahia, and in the Morro Velho gold mine, Nova Lima, Minas Gerais. In Mexico, at Naica, Chihuahua. 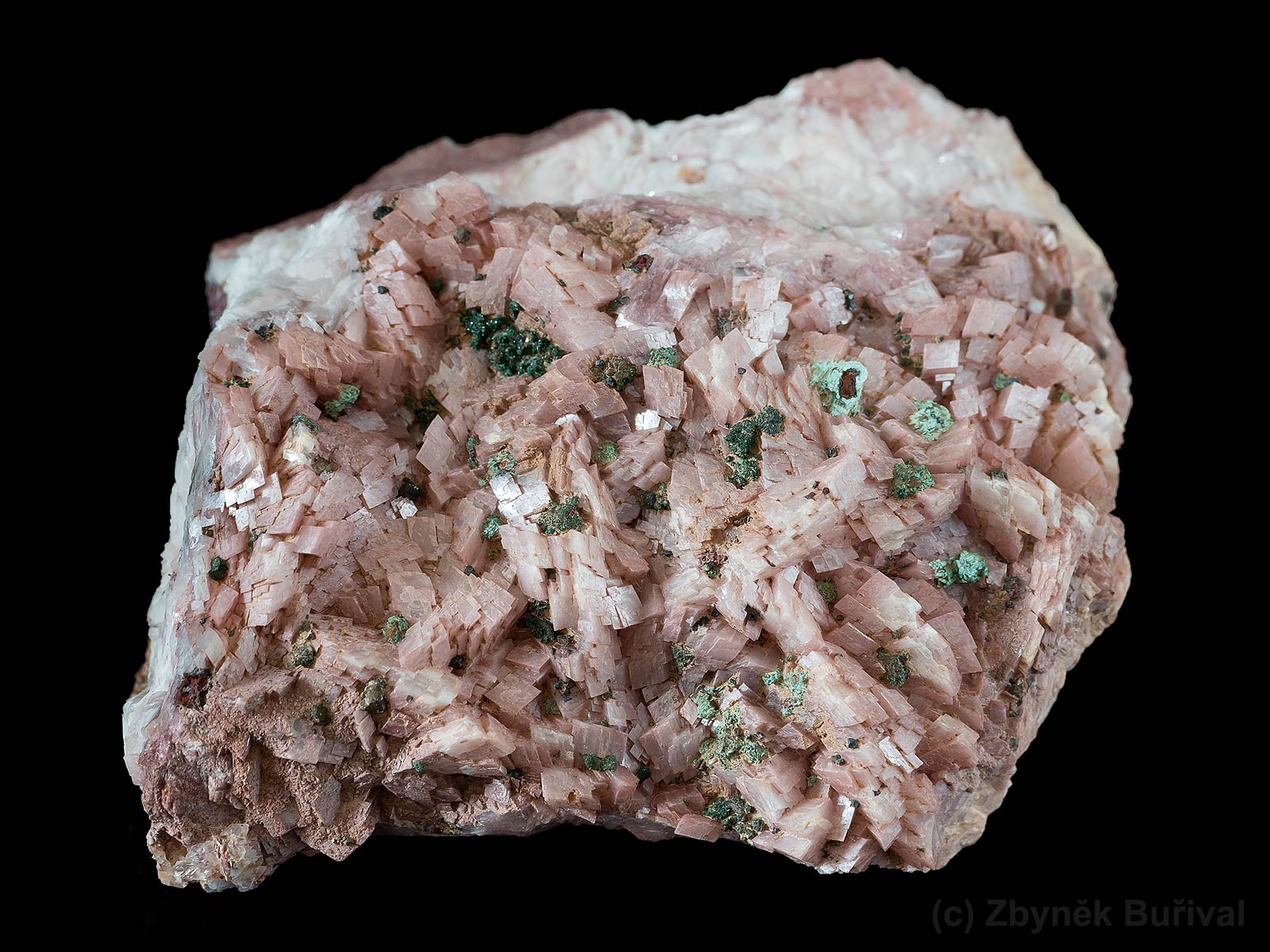 In the U.S., in New York, from Lockport, Niagara Co., eastward to Walworth, Wayne Co.; in North Carolina, at Stony Point, Alexander County; in Missouri, in the Mississippi Valley region, in the Tri-State district, at Joplin, Jasper County; in Kansas, at Galena, Cherokee County; and in Oklahoma, at Picher, Ottawa County.