Halite may not be very well-known by its official name, but it is more easily recognized as naturally-occurring salt. This common rock salt can form incredible crystals and even huge salt caves in nature.

Halite features an isometric (cubic) crystal system, which simply means that the crystals in the mineral contain three axes that are all equal lengths and stand at 90 degrees from each other. Halite is a sodium chloride. Both atoms are regularly distributed within the cubic crystal lattice. Defects in the structure can cause the salt to turn a deep blue color. 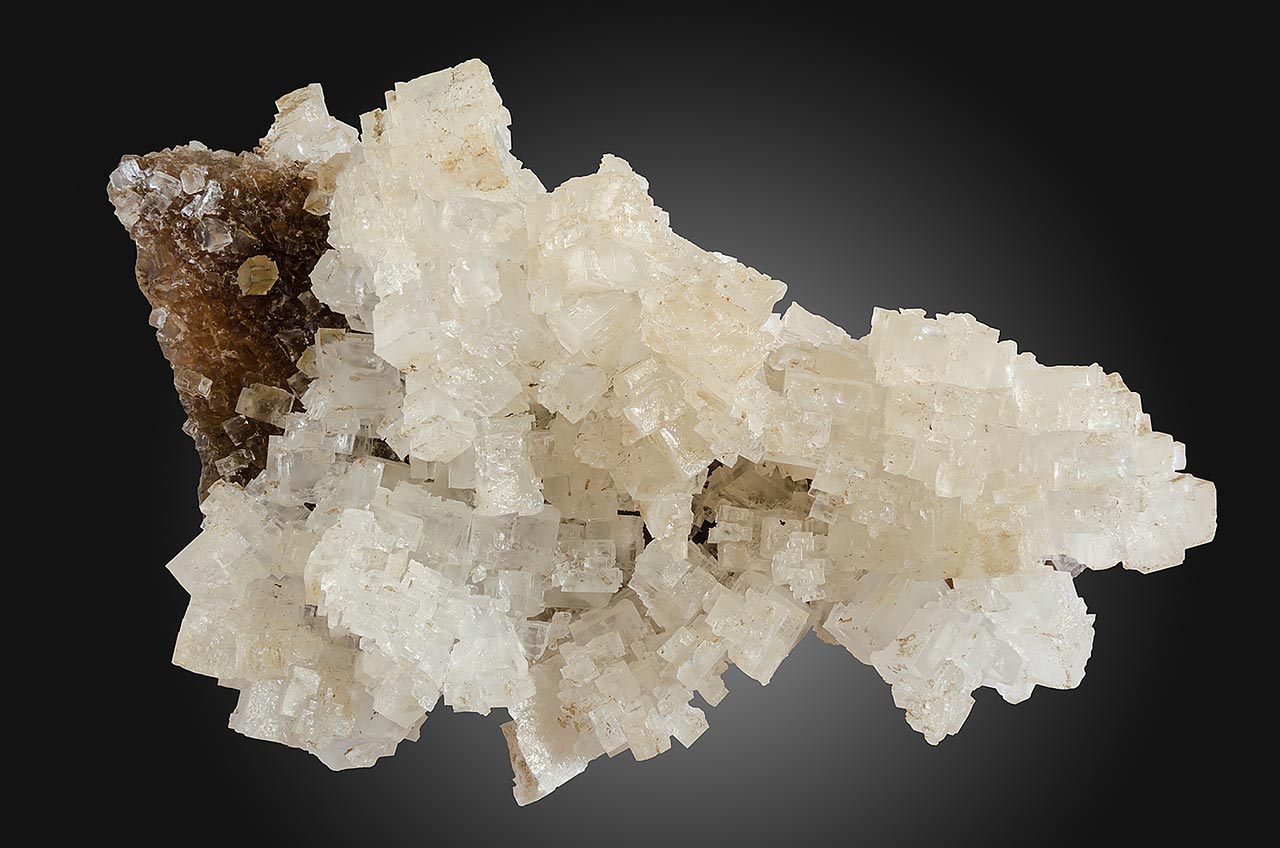 Most halite crystals form in the shape of cubes that may or may not be terraced in shape - otherwise known as hopper shaped. The mineral often occurs in stalactite form, as a grainy, massive growth that forms a crust. It may grow in veins filled with fibers of halite, and sometimes it may be botryoidal aggregates. It is also known to grow in scepter shapes, due to its isometric nature. 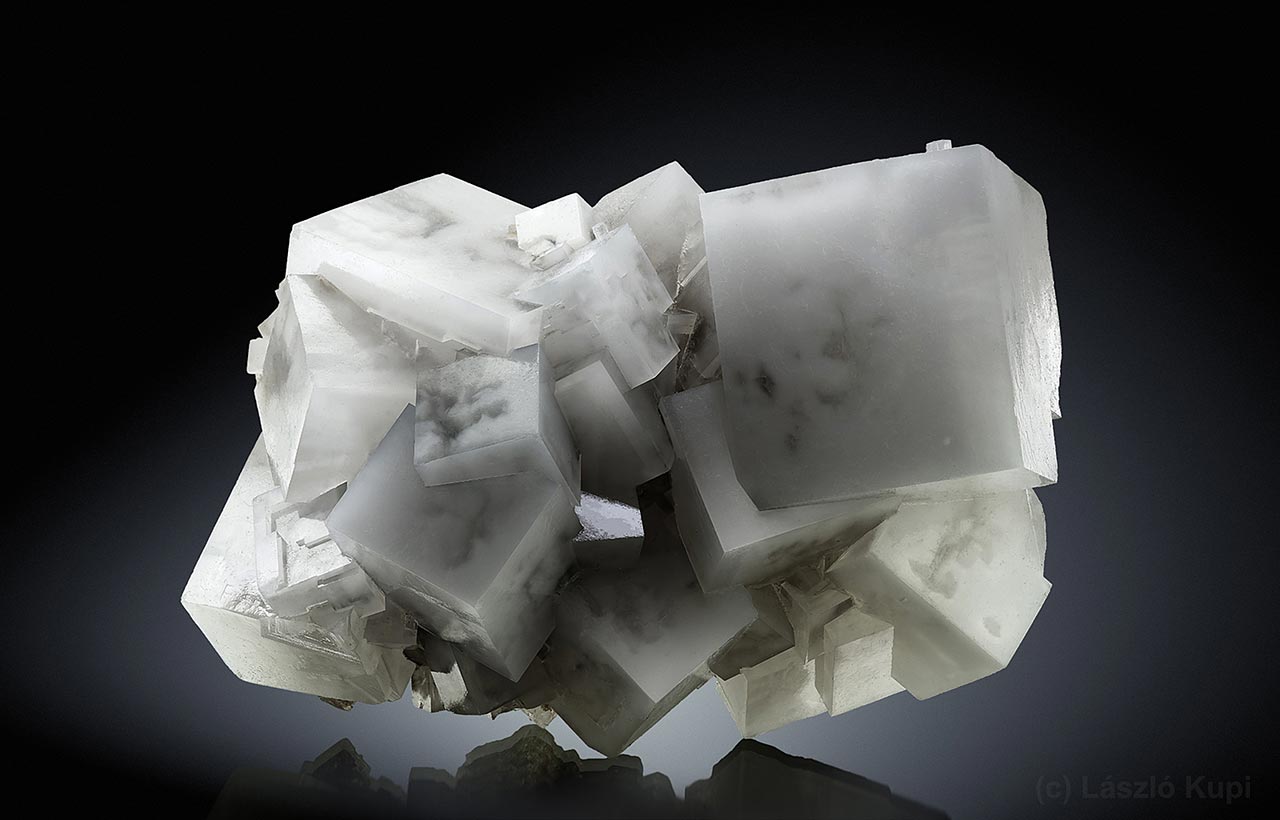 Halite presents itself in a few different colors, including white, gray, green, pink, violet, blue, orange, red, and yellow. It may also be colorless. Sometimes, it may also appear multicolored, and every now and then, it may have a fluorescent red appearance.

Halite has a conchoidal fracture, which means that when split, the indentation from fracturing is shell-like in shape and appearance. However, it is very hard to see the fracture because of the perfect cubic cleavage. It defines a 2 on the Mohs scale of hardness. It is a very soft mineral - it can be scratched even with your fingernail. Halite features a vitreous luster. 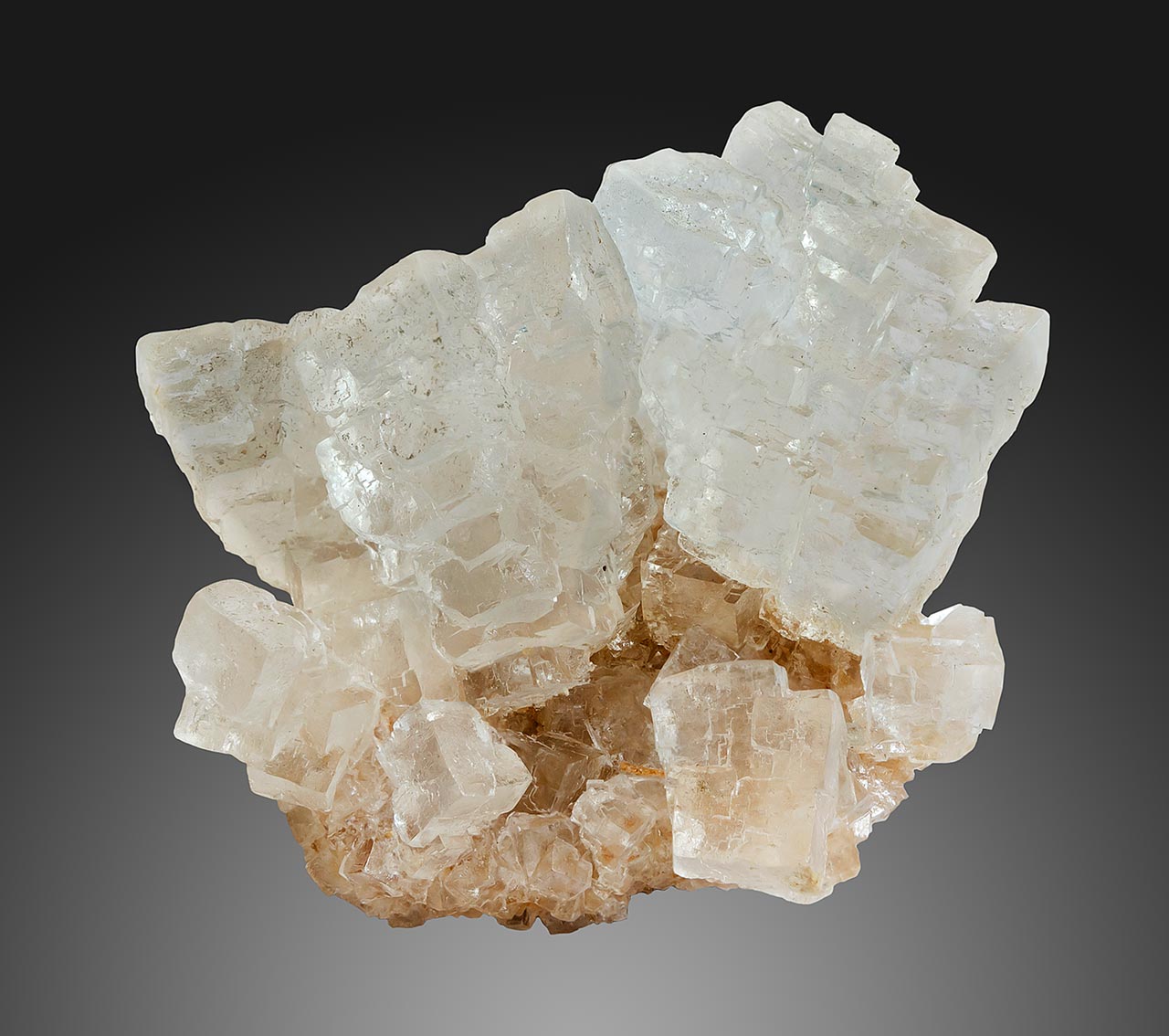 Halite is perfectly soluble in water. Its luster may become more waxy when the surface of the halite is exposed to air moisture, because it is also highly hygroscopic. It virtually sucks the moisture from the air and slowly dissolves. You should never try to wash halite specimens in water, and they should be kept in a very dry place or completely sealed from moisture in the air.

The salt of halite makes an eutectic mixture with water. When salt is put onto the snow or ice, the mixture has a freezing point much lower then pure water. The eutectic point of salt-water mixture is at -21.2 °C with 23.3 % of salt. 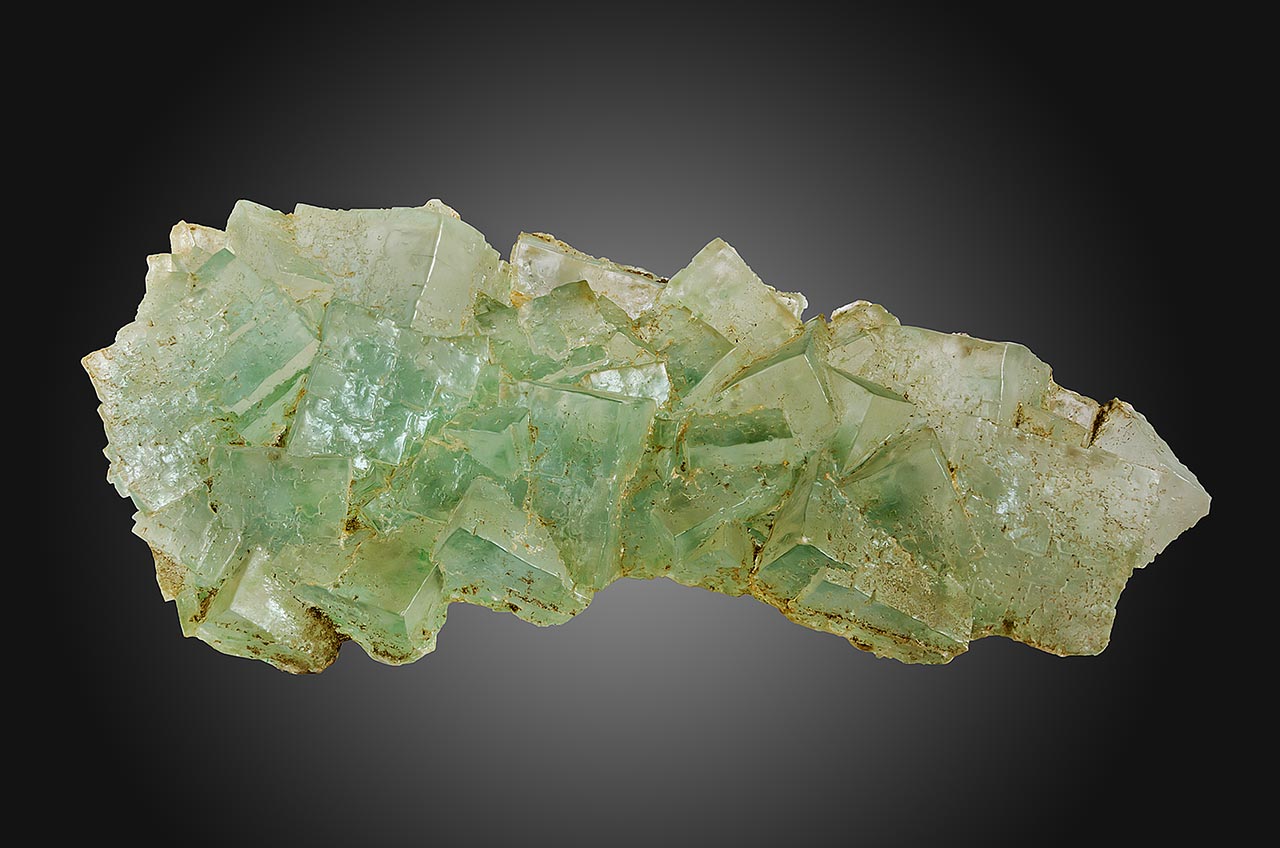 Bellow -0.1 °C halite crystallizes together with ice to form the mineral hydrohalite, which is sodium chloride dihydrate NaCl.2H2O. Hydrohalite is often found in fluid inclusions.

Rock Salt is a term that is often used to describe halite itself, but in reality, it is a 95 - 99 % halite composite that includes impurities. These impurities are mostly gypsum, quartz, calcite, dolomite, or anhydrite.

Halite grows where arid climate and salty water combine. When temperatures increase yearly in these locations, the salt water evaporates and leaves behind a saline film that eventually becomes a large salt deposit. These deposits are known as evaporite deposits or simply evaporites. Marine evaporites form when some amount of the sea water is trapped in a slowly drying pool. Non-marine evaporites form usually in very dry inland areas. Both of these types usually contain repeating layers of halite, gypsum, anhydrite and less often also other halides, sulfates and borates. 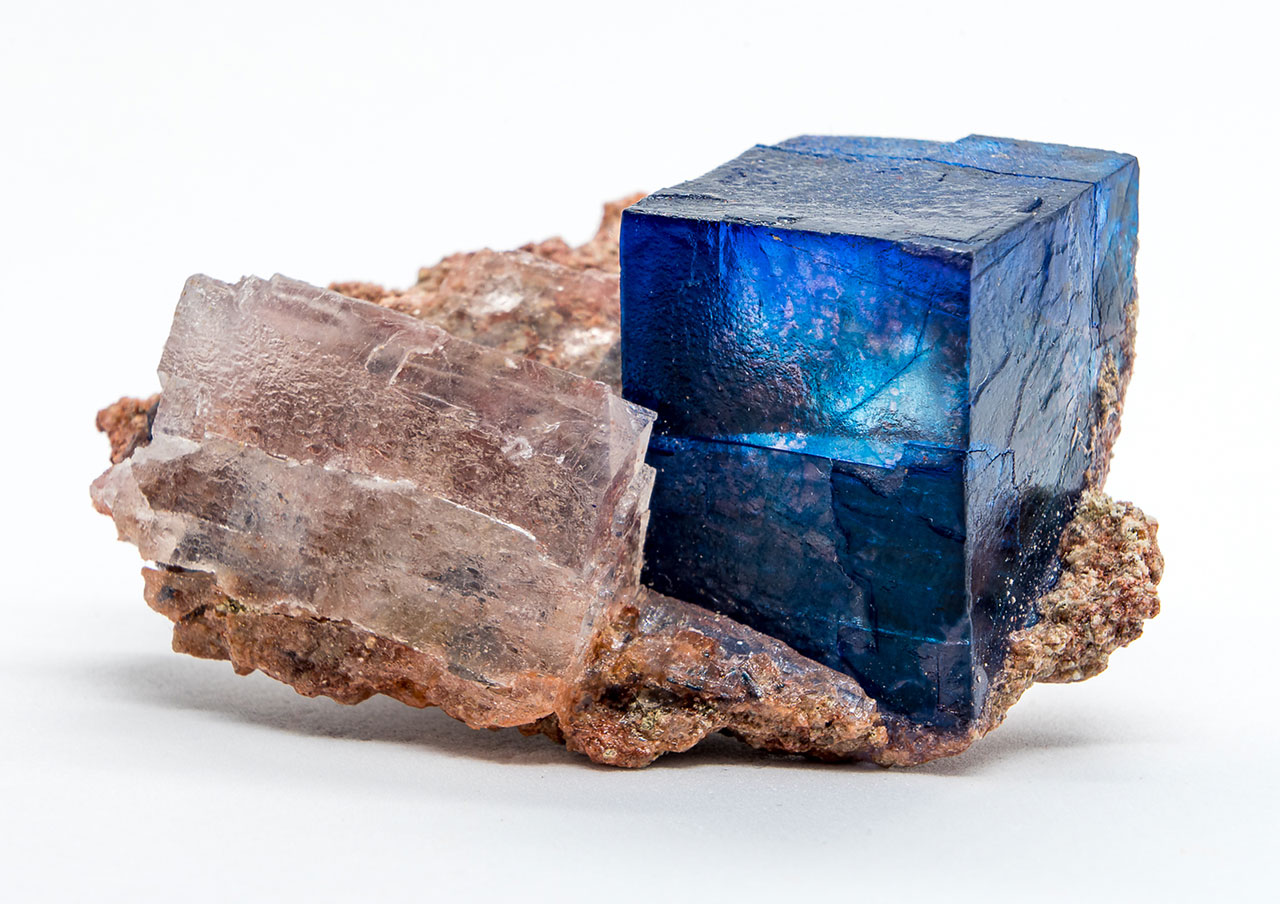 The evaporites might be later folded by tectonic pressure. Because of the different plasticity of salt layers and clastic sediments like clays or sands, the salt is often reshaped into salt pillars, sometimes known as salt diapirs or salt domes. These are often a great source of salt. Halite is highly resistant to radioactivity, and some nuclear waste programs even considered salt diapirs as a possible nuclear waste underground storage. Some evaporites were exposed to irregular precipitation and formed huge caves and interesting karst features in salt layers. The biggest salt karsts are in Iran and Israel. 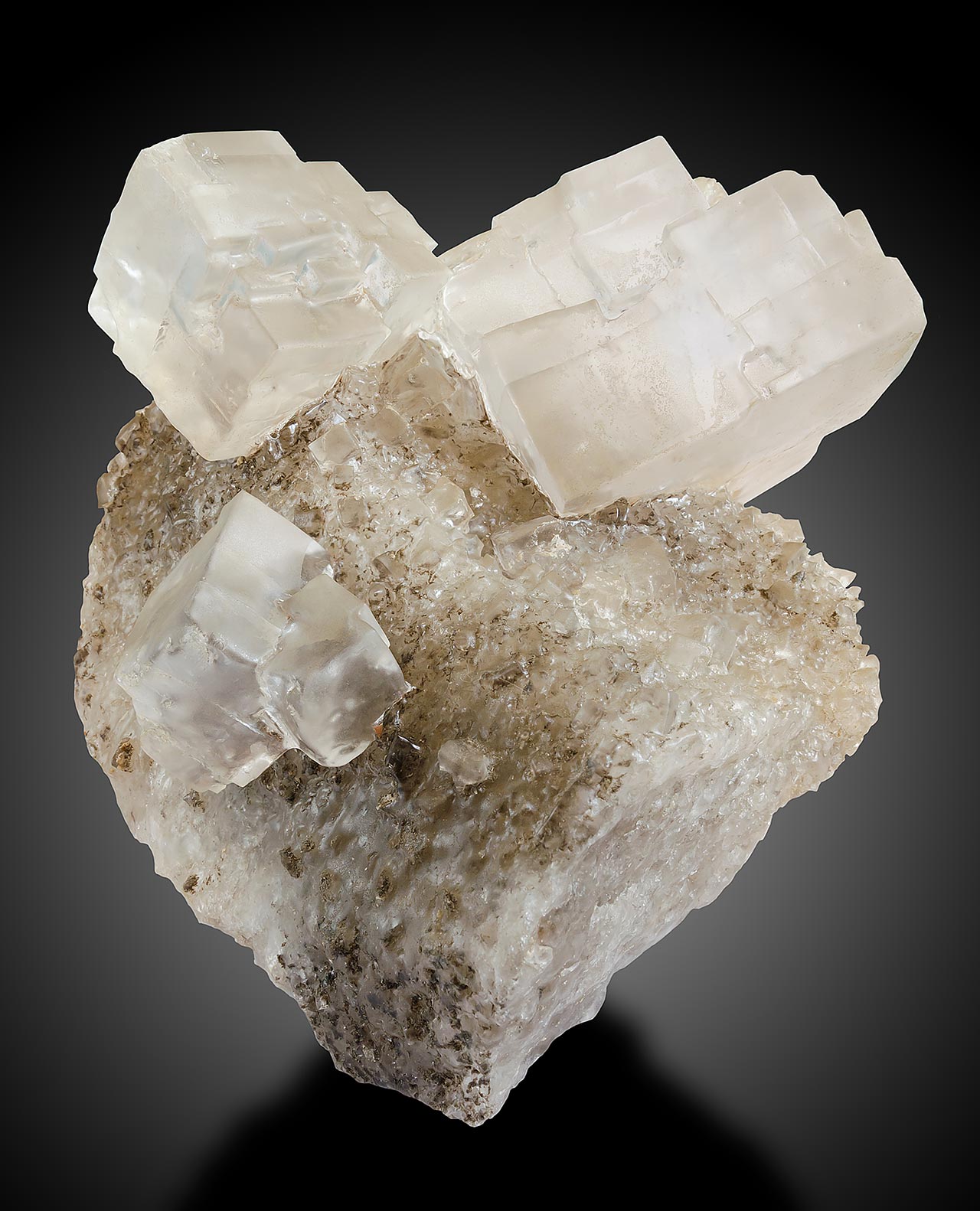 Halite itself is very common worldwide, but prime specimens are less so. Excellent cubic specimens have been historically found in Salzburg, Austria, while blue crystals are found in Stassfurt, Germany. Huge crystals up to 1 m large occur in Merkers, Germany. Halite was mined in Wieliczka, Bochnia and Inowroclaw in Poland, as well as in Sicily and France. Bolivia is home to a massive salt flat, and underground halite deposits and commercial mines can be found in Michigan, Ohio, New York, Oklahoma, Kansas, Louisiana, and Texas.

Perhaps one of the most prominent halite deposits in the world is the Dead Sea in Israel and Jordan. It is slowly leaving a massive salt deposit as it evaporates over the years. Other famous salt lakes are Searles Dry Lake and Borax lake in the USA, Schott el Djerid in Tunisia, Salar de Uyuni in Bolivia or Salinas Grandes in Argentina.