Stibnite is the principal ore of antimony. The mineral is widely admired for its spectacular crystalline habits, which exhibit extremes of sharpness, luster and size. Its principal metallic component, antimony, probably received its name from the Greek anthemon, describing its flowery appearance in clusters. The Latin name for the mineral, stibium, survives today as stibnite.

The oldest known human use of stibnite is its use as a compound of mascara and eye-liner known as khol, dating from 3000 B.C. Pre-Roman Egyptians are known to have used molten antimony to fabricate small vases and personal ornaments. Modern uses are dedicated to manufacture of explosive devices, and creation of both metal-hardening and friction-reducing compounds. 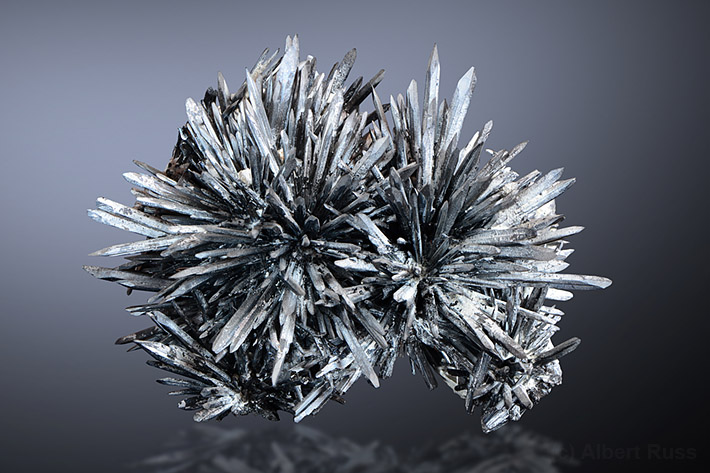 Stibnite is a compound of antimony (Sb) and sulfur (S), with the formula Sb2S3. Stibnite is a member of the orthorhombic system, often occurring as long, prismatic 4-sided crystals with pyramidal terminations at each end. Crystals may be quite large, often resembling swords. In clusters, the crystal can radiate in a variety of directions, or resemble starbursts. Typically, crystals are striated vertically, and can deviate from true prisms into bent, curved or warped shapes. 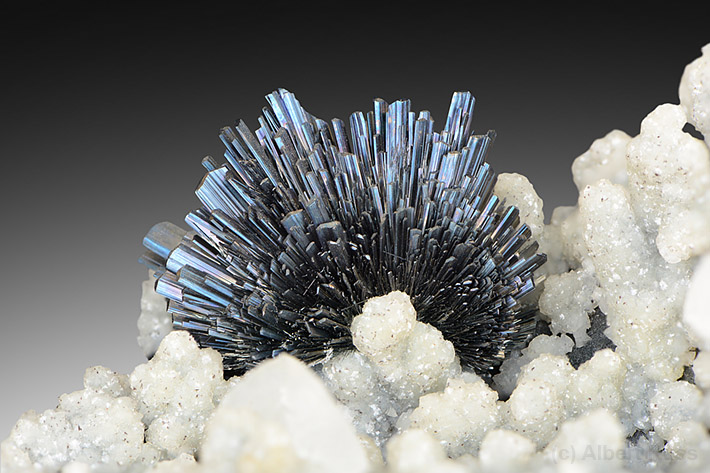 At a finer scale, stibnite can assume an infinite variety of shapes, variously described as massive, grainy, encrusting, reticulated, needle-like and capillary.

The color of stibnite is a shiny lead-gray, bluish lead-gray, steel gray or black. It is metallically lustrous, exceptionally soft (hardness=2.0), with a lead-gray to blackish streak, and a density of 4.63. Stibnite is sometimes partially replaced by stibiconite Sb3O6(OH), a powdery oxide, and cervantite Sb2O4, an antimony tetraoxide. If stibnite tarnishes, its coating may turn dull or iridescent. 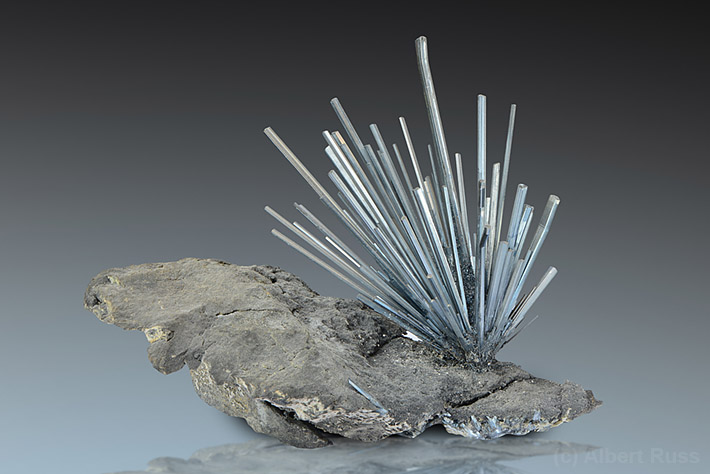 Historically, antimony sulfide carried several Greek and Latin names (anthemon, stibi, stimmi ) until 1430, when Basil Velentine identified the presence of sulfur and renamed it spiessglas. Francois Sulpice Beaudant formally assigned the name stibnite in 1832. The molecular weight of stibnite is dominated by antimony's 71.68% to sulfur's 28.32%.

The softness of stibnite (it will streak when rubbed against paper) means that specimen preservation is somewhat chancy. Collectors are advised to cradle the specimen in a soft cotton cushion, and prevent it from contacting the sides of the container. Over time, the collector can expect the specimen to become dull.

Antimony sulfide (Sb2S3) is one of several sulfide compounds (orpiment [arsenic sulfide, As2S3] and bismuthinite [bismuth sulfide, Bi2S3]) sharing similar physical properties. What they also have in common is that they are typically deposited in mid-temperature hydrothermal and hot-springs systems. These systems occur in the relatively shallow earth environments, where cooling magmas are exsolving mineral-bearing fluids and pumping large volumes of aquifer groundwater into fractured ground. 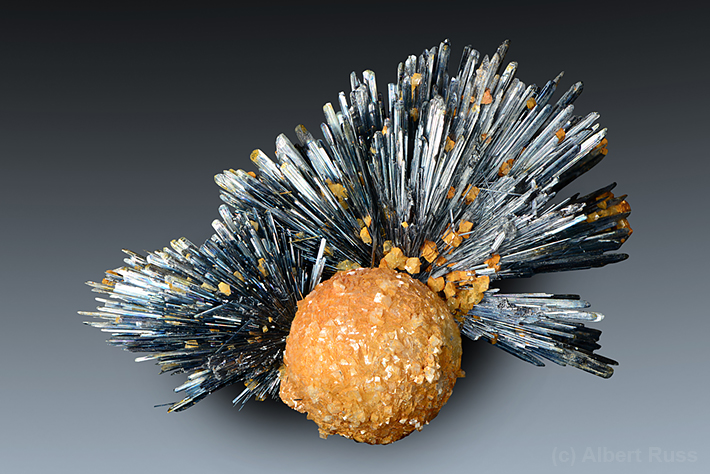 Stibnite is typically present hydrothermal veins with quartz and quite often also native gold. Common is also the Sb-Hg-As formation with various sulfides of mercury and with arsenides. Much less frequent is association of stibnite with calcite, baryte or other sulfides.

Rarely, stibnite can also form as a metasomatic mineral in limestones or precipitate from recent hot springs.

For several thousand years before the modern era, women in the Near and Middle East were known to use antimony, combined with fat, as mascara to enlarge the appearance of eyes. Stibnite (and antimony) are actually quite toxic, and that use has been discontinued. 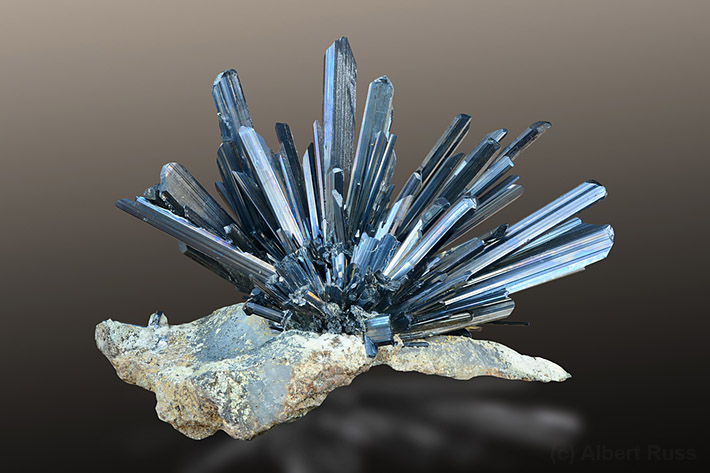 The only tolerable biologic use of stibnite/antimony was as an emetic to induce vomiting. Chemically, the emetic is known as potassium antimonyl tartrate, a concoction whose formula is K2Sb2(C4H2O6)2. The toxicity of antimony was recognized in the Middle Ages, and the habitual method of creating the compound then was to use a cup made of pure antimony to store wine for 24 hours, after which the patient consumed small portions of the adulterated liquid until he vomited. In spite of its demonstrated usefulness, antimony's service as an emetic ended in the 1970s owing to recognized severe side effects. Today, antimony is used as an emetic only in animal research, where it is employed to study the diet of captured animals.

In the industrial world, stibnite - the main constituent of antimony and its compounds - is used in 3 main areas: explosives, metal hardening, and friction reduction. The principal explosives applications are in matches, blasting caps and fireworks. Metal hardening is achieved by alloying antinomy with lead, and similar alloys are employed to produce bullets, printing-press typefaces, and cable sheaths. Friction-reduction alloys are used in bearings and bearing races. 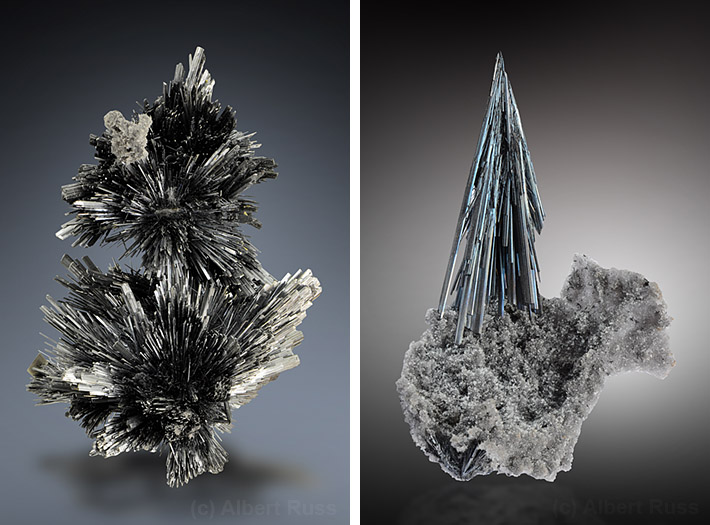 Other generalized applications of antimony are the manufacture of vulcanized rubber, storage batteries, pewter objects, and precision manufacture of electronic components, such as diodes and infrared detectors.

China seemingly has displaced all other localities in the importance of its stibnite production both in terms of global commerce and specimens. Recent statistics indicate China accounts for 88% of world stibnite production, with the largest single mine operation identified as Xikuangshan Mine in Hunan Province. Other major Chinese localities are cited as Wuning Mine, Jiangxi Province; Qinglong, Guizhou Province; the Dahegou Mine, Henan Province; and Nandan, Hechi Prefecture. 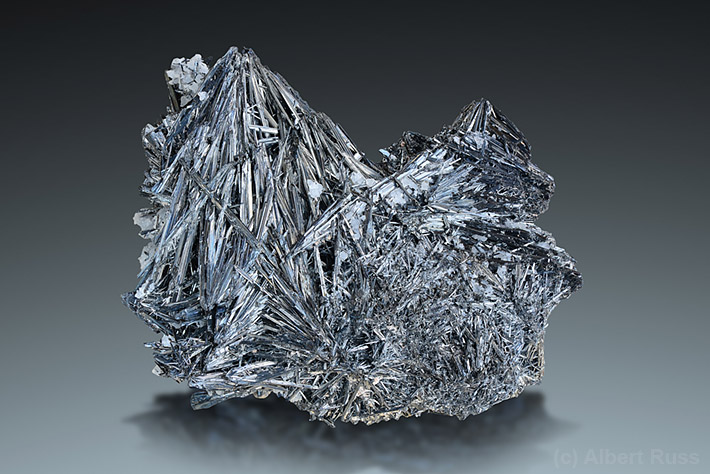 One of the best localities worldwide with monster stibnite crystals was Ichinokawa Mine on Shikoku Island, Japan. Many historic collections still posses more then 50 cm long crystals from this mine. Nice specimens came from Murchison Mine in South Africa.

Many classic localities of stibnite are located in Europe. These include Stadtschlaining in Austria, Puits St. Paul in France, Manciano in Italy or Siberne Rose and Wildermann Mine in Germany. High quality specimens with associated gold were produced in Kremnica, Slovakia. Baia Sprie, Baia Mare, Cavnic and Baiut in Romania were among the last productive mines in Europe. 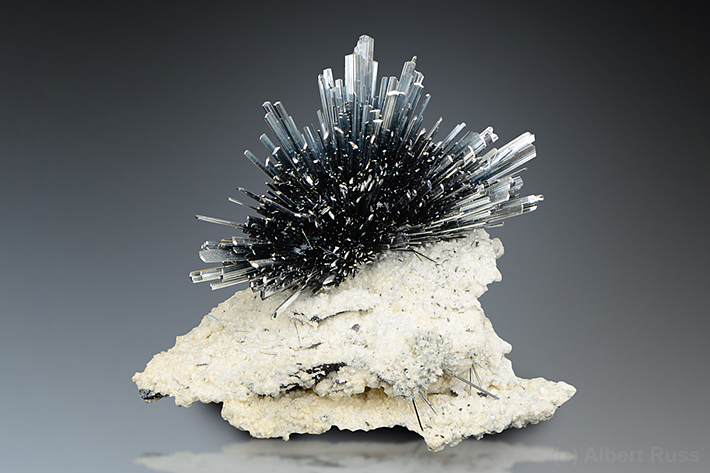 Both Americas host many stibnite deposits. Quirulvilca (La Libertad), Palomo Mine (Huancavelica), and Raura (Lima) are located in Peru. Well known are also Socavon Mine (Oruro) in Bolivia and San Martin (Zacatecas) in Mexico. Significant U.S. localities include Stayton District and McLaughlin Mine in California, White Caps Mine and Murray Mine in Nevada and Red Devil Mine in Alaska.