Aragonite is the less known cousin of calcite. Despite the lack of popularity, aragonite crystals and stalactites are among the most aesthetically-pleasing mineral specimes. Aragonite is present in various hydrothermal environments and it is the principal component of mollusk shells, coral skeletons and pearls.

Aragonite CaCO3, is the chemical twin of the more well-known calcium carbonate, calcite. Although identical chemically, they have completely different crystallographic structures, leading aragonite to crystallize in elongated 3-sided prisms, and calcite in trigonal rhombohedron forms.

Aragonite is a member of the orthorhombic system, frequently crystallizing as columnar, acicular or fibrous specimens. A characteristic of aragonite is its tendency to crystallize as twinned growths of three individual crystals, such that they form a pseudo-hexagon in cross-section. Each pseudohexagonal crystal will display basal striations in three directions. Other crystal forms are acicular or fibrous. Very fine stalactitic forms are also known as flos ferri (Flowers of Iron) because of their association with iron ores (siderite) at Carinthian iron mines.

Aragonite displays a more compact crystal structure than calcite. In aragonite, the carbonate ion groups (CO3) have a central carbon at the center of three oxygens. Two bases of the triangles are joined back-to-back, creating a diamond-shaped figure with a higher symmetry than calcite. Crystals of aragonite and calcite can grow together in microcrystalline clots, such that they cannot be identified without recourse to optical tests. It is entirely likely for a specimen to be mislabeled.

The stalactitic variety known as flos ferri is notoriously brittle, and may break when touched.

Aragonite (orthorhombic), calcite (trigonal) and vaterite (hexagonal) are all polymorphs of CaCO3. One of the distinguishing characteristics is their stability fields in pressure-temperature (P-T) space. There are accepted generalizations about their respective stability ranges, but there seem to be also some chemical impurities involved in the stability of aragonite. Calcite is considered to be the stable phase at STP (Standard Temperature and Pressure) conditions. Aragonite is considered to be stable only at elevated P and T, combined. At higher temperatures alone (above 400 °C), aragonite will spontaneously convert to calcite. 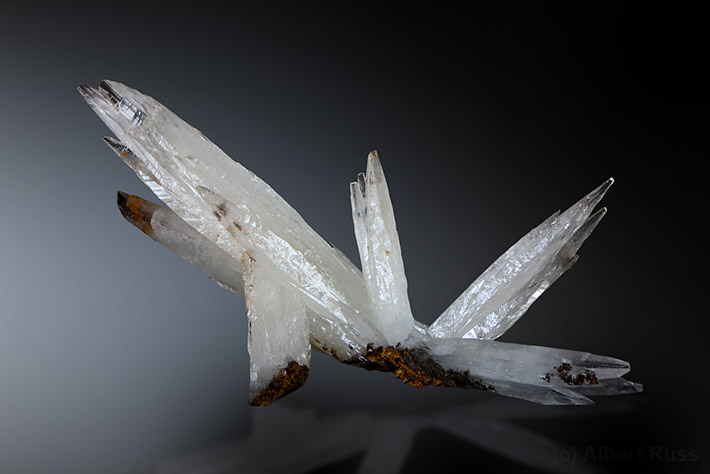 Vaterite, named after a German mineralogist, Heinrich Vater, is a metastable variant of calcium carbonate at STP. It is more soluble than either aragonite or calcite, and converts to aragonite if exposed to high temperature water (> 60 °C), and to calcite if to low-temperature water.

The stalactitic variety flos ferri was already mentioned. It often develops in the fissures in the carbonate rocks or inside abandoned mines. When ore minerals are present, flos ferri may be colored blue, pink, purple or yellow. Blue flos ferri is also known as zeiringite. 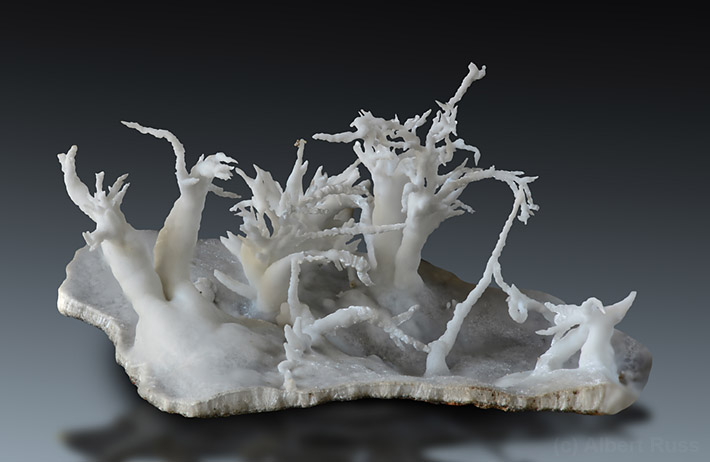 A unique manifestation of cave-bound aragonite occurs in a form known as cave flowers, frostworks or anthodites. Anthodites are clusters of long needles of crystals attached to, and radiating out from, a common base. They are unique to caves (protected from outside disturbances), and are well-preserved in certain world-famous cavern complexes. They often occur together with stalactitic aragonite and flos ferri. 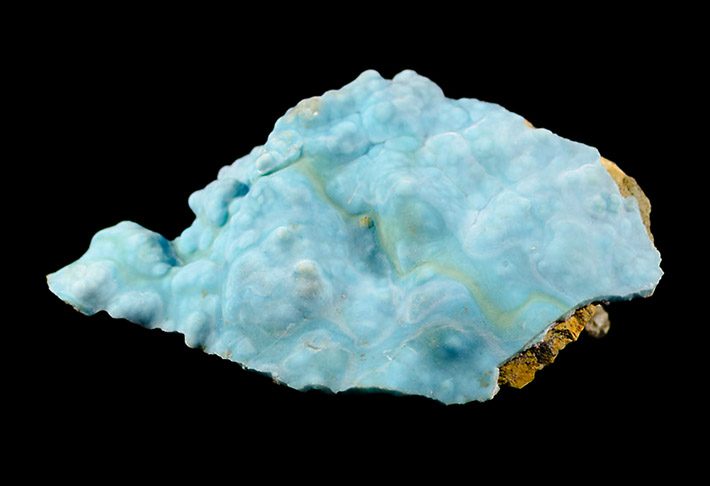 If cation substitution in aragonite becomes extensive, then the following varieties are identifiable:

The varietal version of calcium-barium carbonate is not formally named. Witherite (barium carbonate, BaCO3) is the pure end-member, and is a mineral occurring in low-temperature hydrothermal environments.

The varietal version of calcium-lead carbonate is tarnowitzite. Cerussite (lead carbonate, PbCO3) is the pure lead end-member, and is a secondary mineral of lead. 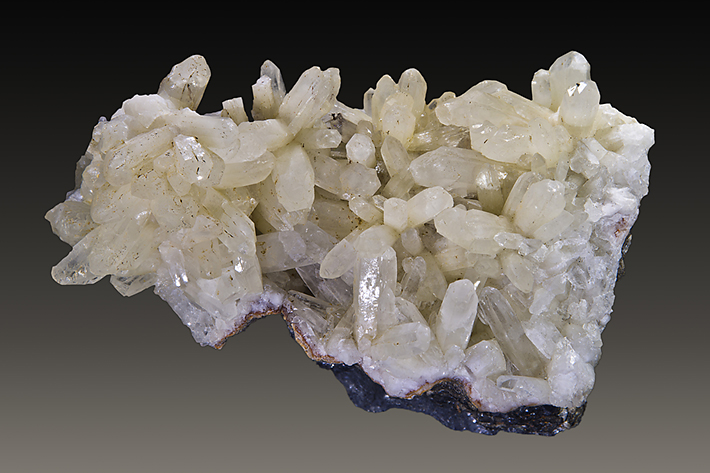 The varietal version of calcium-zinc carbonate is nicholsonite. Smithsonite (zinc carbonate, ZnCO3) is the pure zinc end-member, sometimes present in hydrothermal systems with sphalerite or other minerals of Zn.

Aragonite is widely distributed over the planet, and owes its origin to volcanic activity, sedimentary accumulation, burial metamorphism in the oceans, biogenic production, and mineral-rich hot springs and caves. 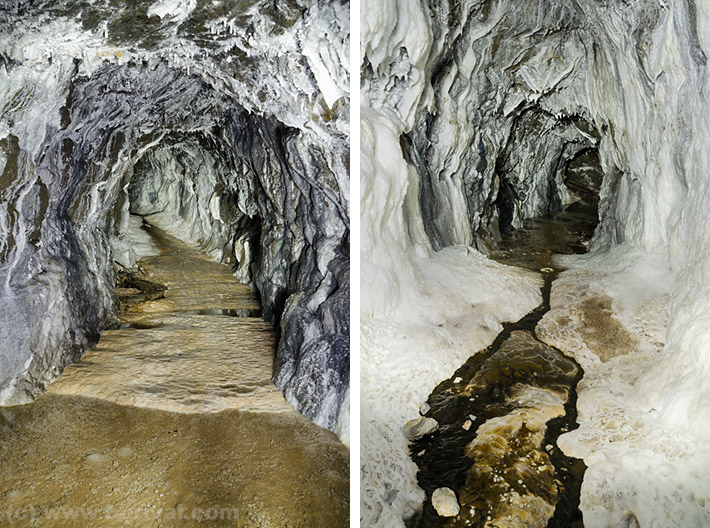 Some parts of the abandoned Dobšiná Mine in Slovakia are already almost fully turned into the aragonite karst caves. Both photos: Zbyněk Buřival

The fact that aragonite is so prevalent at surface Earth conditions is almost inexplicable. One anomaly is the purely lithological peculiarity that there are extensive regions of coastal carbonate deposition where aragonite is the dominant mineral. The same type of accumulations occur in oolitic shoals (sandbars of tiny carbonate grains) and sabkhas (supratidal salt flats). Over geologic time, those accumulations will convert to calcite, a process thought to be on a scale of 107 or 108 years.

Oceanic burial metamorphism also produces aragonite in serpentinites, Mg-rich mafic rocks originally generated in subduction zones of converging crustal plates with a high content of entrained Mg-rich pore waters. There is speculation that the magnesium and salt content of the crystallizing fluid, the time required to crystallize, or the turbidity of the fluid are factors in promoting aragonite. 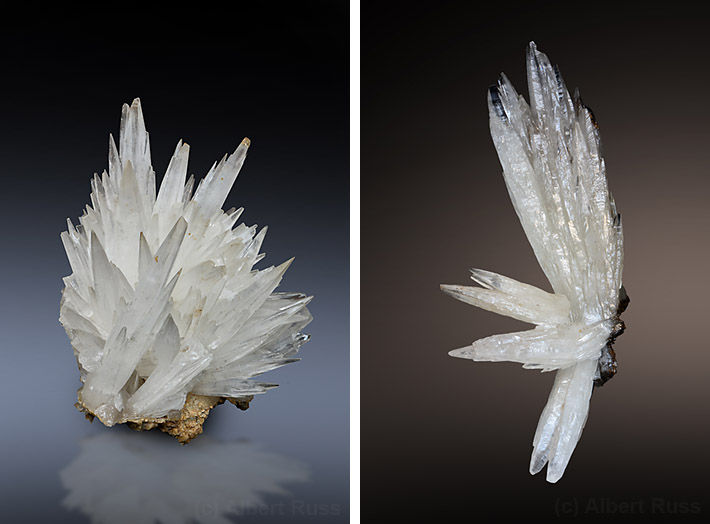 It is a biologically curious fact that so many mollusks preferentially secrete aragonite. Most bivalves (invertebrates with two shells, including clams, oysters, ostracods and brachiopods) and corals (both warm- and cold-water species) secrete aragonite. Pearls and mother-of-pearl secreted by oysters are all aragonite. Yet, some mollusks exert such biologic control over deposition that (a) the organic aragonite differs crystallographically from the inorganic variety or (b) the deposition of aragonite vs. calcite varies throughout the shell. The iridescence seen in abalone is aragonite. The iridescent layer seen in fossil ammonites is selectively called ammolite.

Aragonite in hot-springs environments develops its own special signature. Nucleating aragonite will often incorporate sand grains, imparting a brown color. In the hot-spring environment, the rising water will precipitate aragonite upon reaching air, and create thick mounds and crusts around the spring. Generally, these mounded or crusted accumulations are referred to as travertine. 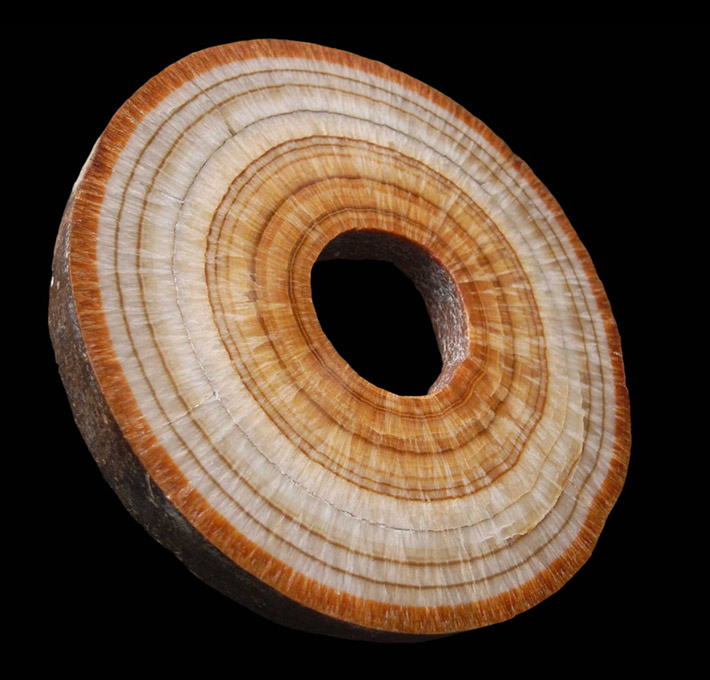 Layered aragonite can recently form inside the pipes at hot springs. Photo: Lysippos

If the aragonite incorporates organic debris (such as moss, twigs or leaves) at the site, it may be called tufa. Often, these deposits will develop banding, and will be marketed under such names as Onyx Marble, Suisan Marble, California Onyx, or Mexican Onyx. Onyx Marble sites are recorded in Egypt, Algeria, Morocco, Argentina, Mexico and the US. Some layered aragonites are sold as onyx specimens and often confused with black and white layered chalcedony - known as onyx too.

There are few practical industrial uses of aragonite. It is rarely used as a gemstone because of its softness. Various onyx marbles and travertine are widely used in the form of polished slabs for building decorations and tiles. And, as with many stones, there is a cottage industry devoted to promoting the mineral for metaphysical uses.

Aragonite has been employed in limited areas where its chemical formula has value. One such application is as a pH stabilizer in aquariums, or where replication of reef environments is desired. Its presence retards the dissolution of biogenic calcium carbonate in nearby mollusks and corals. Its other likely valuable use, relying on cation substitution, will be as a sorptive agent to sequester toxic pollutants (cobalt, lead and zinc) from wastewaters. From time to time, it has been used as a soil amendment to raise pH, but is usually not competitive with dolomite.

There have been desultory attempts in the past to make aragonite a significant part of the industrial economy (most calcium carbonate industrial needs are filled by calcite/dolomite). This prompted a Bahamian national, living in a country awash in aragonite, to imagine a future dominated by aragonite. Unfortunately, commercial use of aragonite was always too expensive or too complicated.

Aragonite is very widespread mineral and occurs in various environments. Some selected localities are listed bellow:

Aragonite was named by Abraham Gottlob Werner in 1797 for its discovery in the type locality, the village of Molina-de-Aragon, Guadalajara, Spain (not in the Province of Aragon, as is often stated). La Pesquera, Minglanilla and Pantoja are other Spanish aragonite localities. 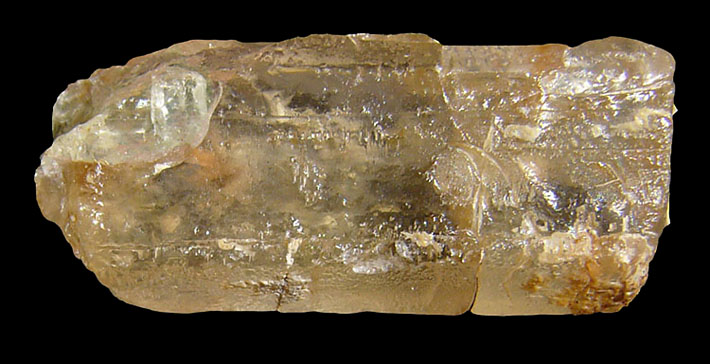 Podrečany and Špania Dolina in Slovakia are among the very classic sites with world-class aragonite specimens. Číčov (near Hořenec) in the Czech Republic is one of the few sources of yellow gem quality aragonite crystals. Great oolitic specimens and layered hot-spring aragonites were produced in Karlovy Vary, Czech Republic. 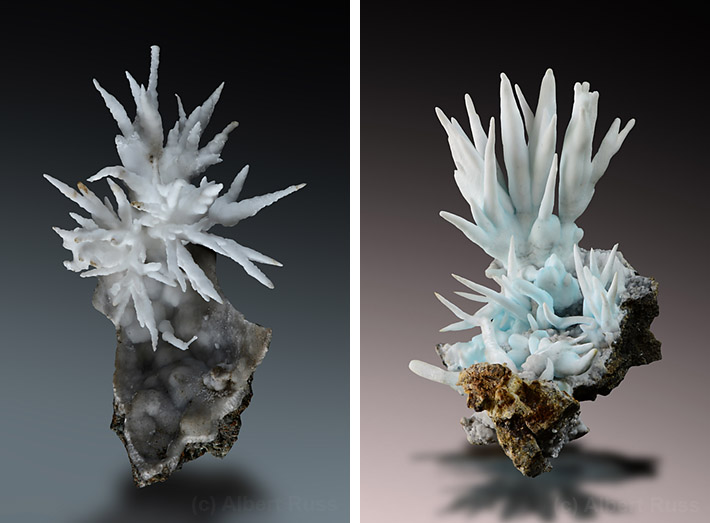 Flos ferri aragonite is known from many places: Erzberg and Hüttenberg in Austria; Dobšiná and Hodruša-Hámre in Slovakia or Lavrion, Greece. Aragonites from Dobšiná and Lavrion are sometimes colored blue (known as zeiringite) or less often pink.

Nice anthodites and stalactitic aragonite occur in famous aragonite caves: Carlsbad Caverns (Carlsbad, New Mexico, US), the most accessible example of what the West Texas Permian oilfields would look like if emptied of their petroleum. Skyline Caverns (Front Royal, Virginia, US) are a cave system uniquely discovered by scientific reasoning and analysis. Craighead Caverns (Madisonville, Tennessee, US) is a site of the world's second largest underground lake (The Lost Sea). 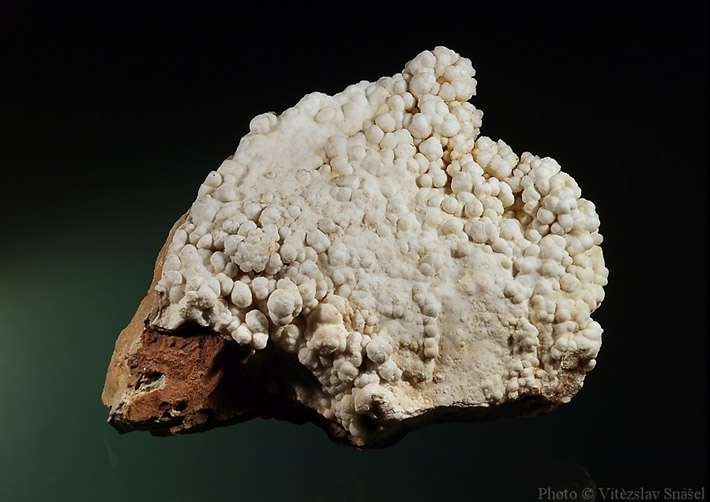 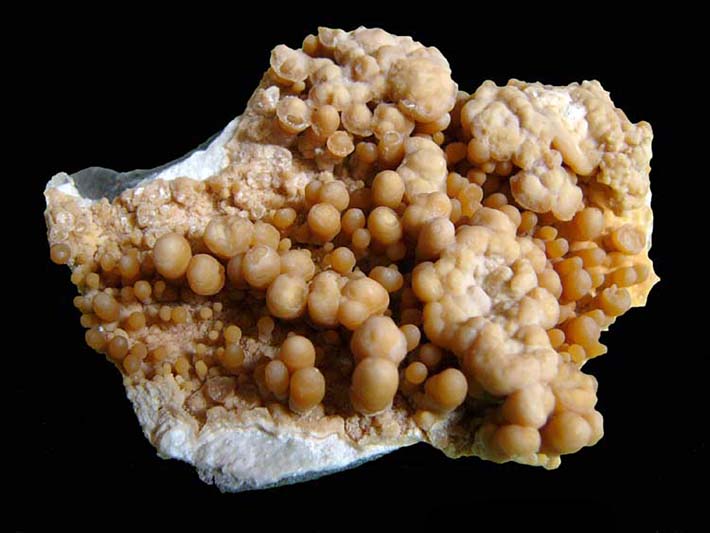 Tarnowitzite and nicholsonite aragonite varietes are known from Tsumeb, Namibia.