Hydraulic mining is easy and efficient method to move huge amounts of dirt. It was used by Romans in their placer gold mines and later became very popular during California and Alaska gold rush events.

Early miners in Roman times recognized intuitively that rushing water could be an effective way to wash away overburden to expose fresh bedrock containing visible gold veins, and to clean up gravels containing alluvial gold. Building on the observed habits of European tribes they conquered, the Romans successfully put these ideas into industrial-scale practice as the Empire expanded. This technique was initially implemented by damming a stream to create a small reservoir which could be repeatedly drained to flush unwanted debris away from the targeted area. Ultimately, the Romans built a number of aqueducts to supply water on a sustained basis in Roman Britain in South Wales, and in Roman Spain at Las Medulas, now a UNESCO Word Heritage site in northwest Spain, a few miles north of the Spanish border with Portugal. 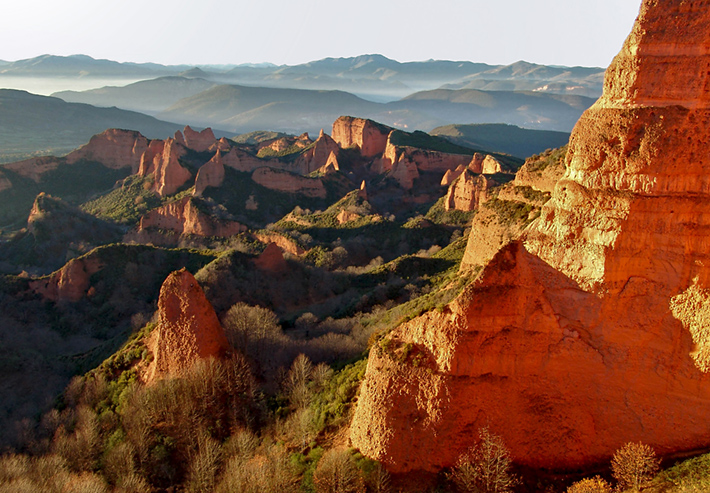 The workings at Dolaucothi in South Wales have been confirmed mostly through field surveys and modern archaeology. There, the Roman mining presence began in about 74 AD with the establishment of forts, and continued into the 3rd century. The site was the only major gold extraction operation in Britain, and was augmented by the construction of a 7-mile long aqueduct from the Cothi River. A 1930s-era discovery of a wheel fragment in a deep portion of the Dolaucothi mines suggests that the Romans also used a set of 10 reverse-overshot water wheels to effect a lift of 3.5 m per wheel to dewater the mine to a depth of 30 m. 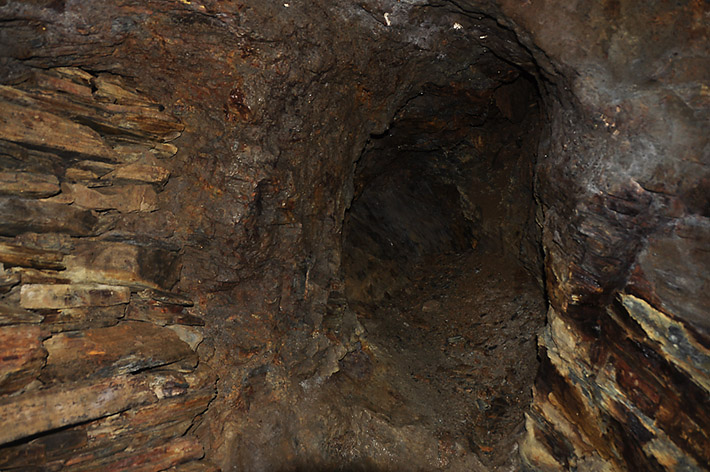 Las Medulas is a self-evident scene of environmental carnage. Las Medulas was the largest gold mining operation in the Roman Empire, lasting about two centuries beginning after 25 BC. The Romans built a group of 7 aqueducts up to 30 miles long to transfer water from the streams in the higher La Cabrera mountains down to the mine area, where trenches and channels were dug into the rock to allow the water pressure to excavate and widen the cuts. 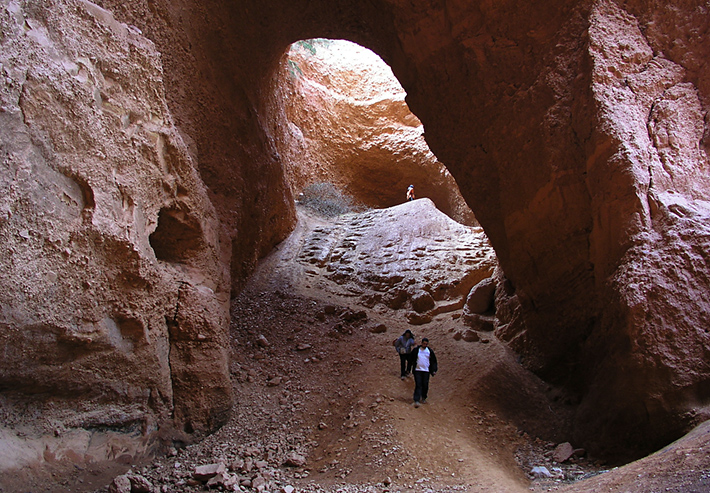 Modern descriptions paint a picture of the Las Medulas mining as having undermined a mountain. Pliny the Elder, writing in 77 AD, described a wasteland on a scale far beyond the work of giants, involving atrocious mining conditions resulting in hundreds of deaths. Pliny estimated the yield from the workings at 20,000 Roman pounds of gold annually, supported by an army of 60,000 workers.

Large-scale hydraulicking remained a dormant method of mining gravel with water until the California Gold Rush. Central California has a rather high geochemical endowment in gold, expressed partly as a large number of veins in deep fault systems in the Sierra Nevada Mountains, and partly as sheets of gold-rich Tertiary gravels eroded from those same veins. The gravel sheets cover a wide area east of Sacramento, and are coarse, poorly cemented accumulations of mineralized rock. 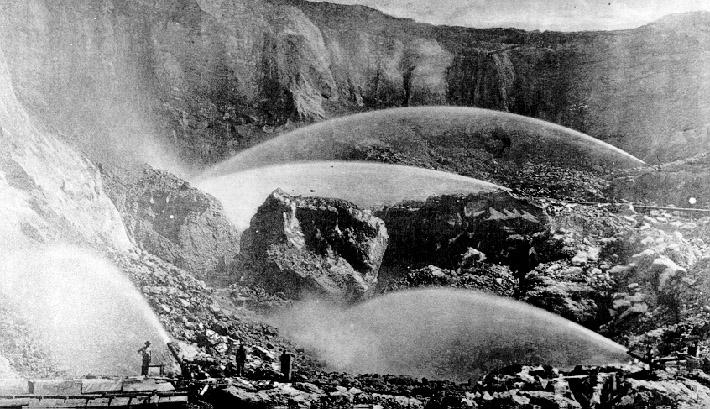 North Bloomfield Mine at Malakoff Diggins, California during the gold rush. Photo: Anonymous

In 1853, shortly after the first gold discoveries, prospectors fanned out into the gravel fields and quickly found placer gold. The areal extent of the gravel terrain was a productive hunting ground, so much so that miners realized that increasing the scale of extraction was a sure path to wealth. Instead of relying on artisanal tools, such as gold pans and rockers managed by a few individuals poking about in small alluvial pockets, they recognized the potential of harnessing large volumes of water, much as the Romans had done nearly two millenia before. 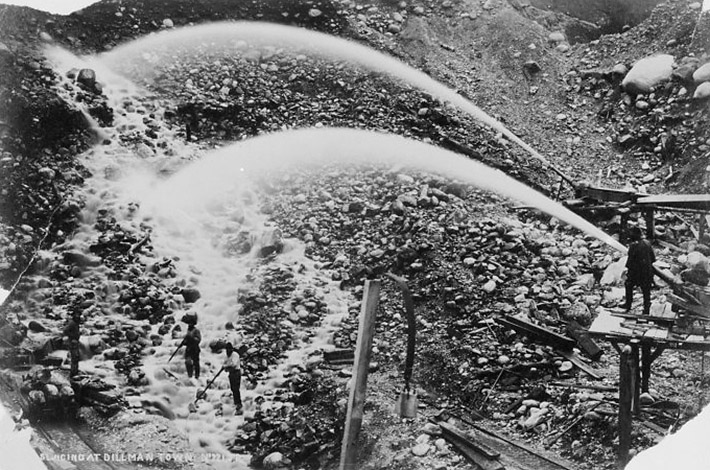 The solution was to substitute hoses for aqueducts

Edward Matteson set up a system of wooden sluice channels which tapped into mountain streams at higher elevations, and channeled the water into holding ponds above the gravels. From there, large-diameter canvas hoses directed the water downhill into fixed stations terminated by a giant nozzle - a monitor - the size of a small cannon. The monitor was balanced and mounted on a 2-axis gimbal allowing the operator to direct water flow left-to-right and up-and-down. The delicate balancing, coupled with the gimbal system, allowed the operator to easily direct a high-pressure stream of 5,000 psi water at the gravel target. Mounted on a hillside bordering a small valley, the operator could aim a jet of water across the valley and wash away the facing hillside.

The immediate result of hillside removal was the degradation of local landscapes, extensive damage to river systems, and devastation of downstream agriculture. Local landscapes were obviously ruined by removal of soils and vegetation, creating accelerated erosion. One such area now preserved as a State Historic Park in California is Malakoff Diggins, a large basin of pale tan and white denuded soils with thin vegetative cover. 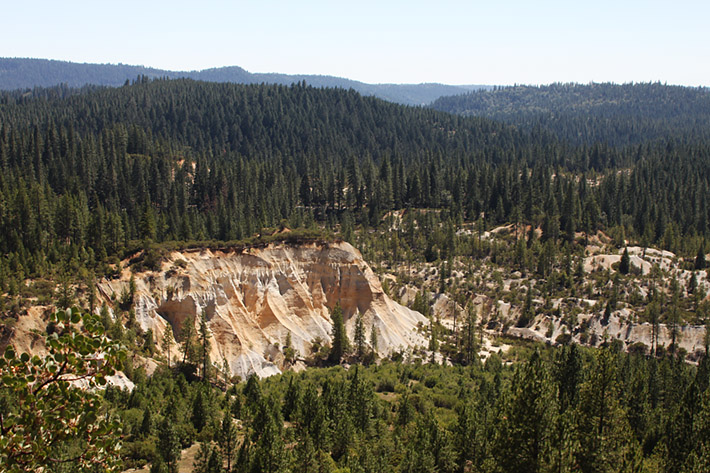 The hillside removal dumped millions of tons of water and earth into the drainages feeding the Sacramento Valley, where the stream gradient became much lower. With a lower gradient, water flow diminished, rivers widened and dropped their suspended sediment, choking the existing streambed. Rivers were forced to overflow their banks and develop new channels in floodplains. Rising riverbeds interfered with navigation, and the effects were felt most at Marysville, the junction of the Yuba and Feather Rivers, which was also the jumping-off point to the local goldfields. Dredging became necessary to maintain river travel in parts of the Sacramento Valley. 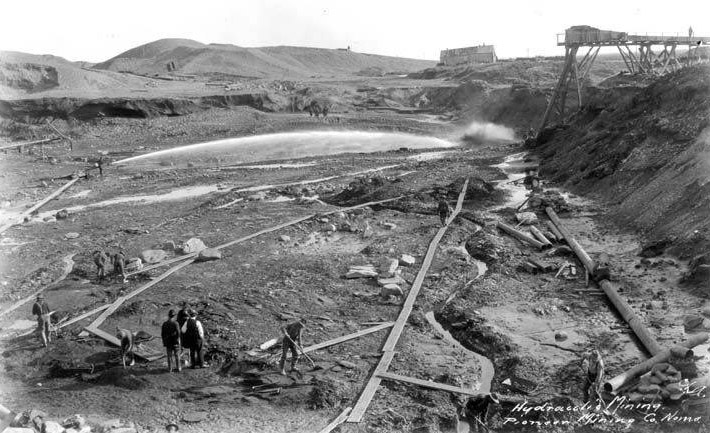 Mining sediment buried vast areas of farmland in the Sacramento Valley. Farmers collectively sued to end hydraulic mining and, in a landmark decision, prevailed in January, 1884 in one of the most celebrated cases in US mining law, Edwards Woodruff v. North Bloomfield Mining and Gravel Company. The District Court judge declared that hydraulic mining was a public and private nuisance, and prevented all such activities on tributaries which fed into navigable rivers. 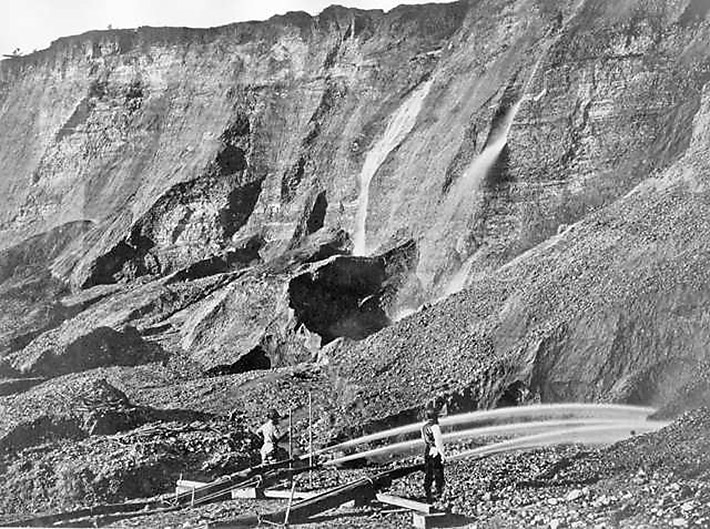 The US Congress offered some relief to hydraulic mining operators by passing the Camminetti Act in 1893, which granted the right to hydraulic, provided adequate sediment retention systems were put in place, but the scale of such operations in California had already declined by then owing to an 1891 flood which destroyed much of the existing infrastructure. But hydraulic mining was still widely used in placer gold mines on Alaska in the early 20th century.

Today, hydraulic gold mining is only rarely practiced on an industrial scale, but gold mines on Alaska sometimes use it. It survives mostly in artisanal form in remote, undeveloped and largely unregulated areas of the world. However, modified hydraulic mining method is still used in both surface and underground mining of kaoline, coal and other soft materials.