Vivianite is found in many geological environments. Its great blue-green crystals are very rare and very popular among collectors. Also vivianite filled fossil shells are among very interesting and popular collectors items.

Vivianite distinguishing characteristic is that it permanently changes color with exposure to light, changing from a colorless or pale green transparent mineral to an opaque one in various shades of blue, then darker green, brown, purple and purplish-black. 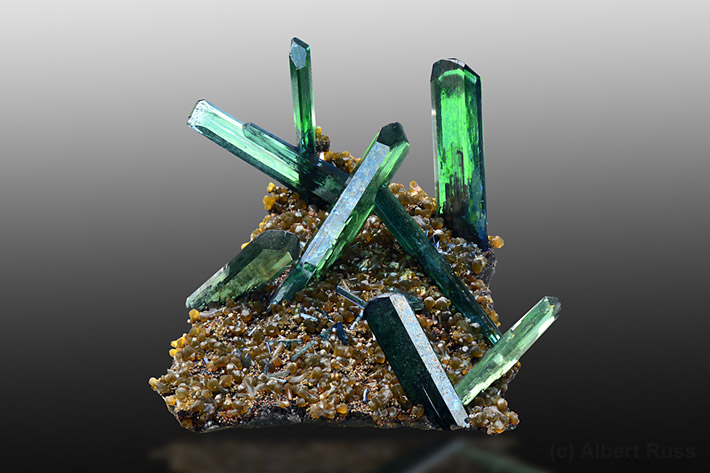 Vivianite is a member of the monoclinic system. The mineral usually occurs as prismatic crystals, sometimes vividly colored. Crystals can also occur as star-shaped aggregates; as bladed, fibrous encrustations; or as tabular, micaceous, nodular, concretionary, earthy or powdery masses. Equant crystals are rare. Elongated crystals may show some flexibility, and may be bent. Fibrous varieties are sectile. 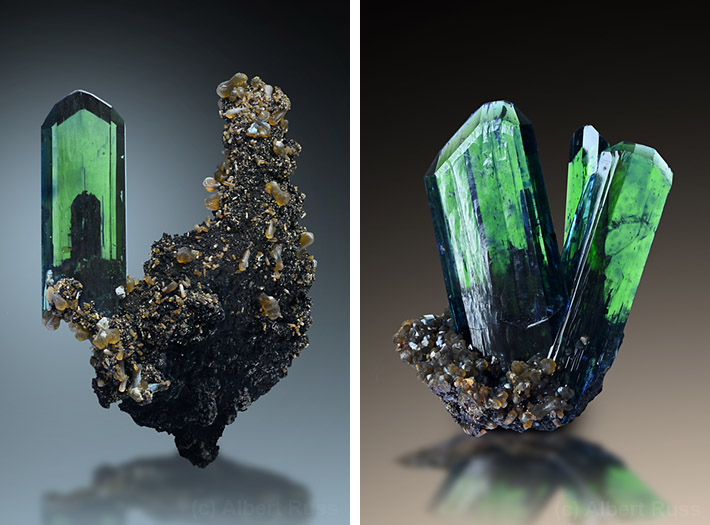 Manganese (Mn2+), magnesium (Mg2+) and calcium (Ca2+) may substitute for iron (Fe2+) in the structure. Phosphorus in the anion group can be replaced by As5+. These two substitution paths lead to a large number of recognized variations of vivianite group minerals. It is a family of minerals with the general formula A3(XO4)2.8H2O, where A is a divalent (2+) transition metal cation and X is either phosphorus or arsenic. 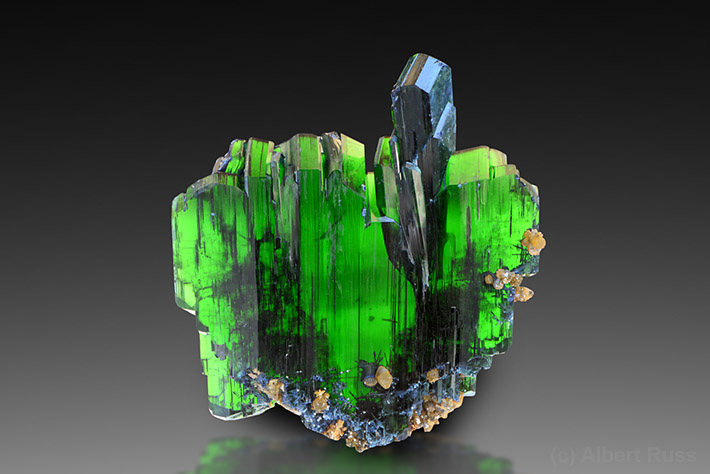 Metavivianite (Fe2+3-x,Fe3+x)(PO4)2(OH)x.8-xH2O, which vivianite readily alters to, is not a member of the vivianite group because it contains trivalent Fe3+ cations.

Pure fresh vivianite is colorless, but ranges into shades of green, bluish green, greenish-blue, indigo-blue, grayish-blue, purplish-black or black, depending on the level of self- oxidation described earlier. Luster ranges from pearly on cleavage surfaces to vitreous or dull elsewhere. Its hardness is variable (1.5 - 2.0), with a white streak that will degrade to dark blue or brown, and a density of 2.68. By weight, vivianite is 42.97 % FeO, 28.30 % P2O5, and 28.73 % H2O. 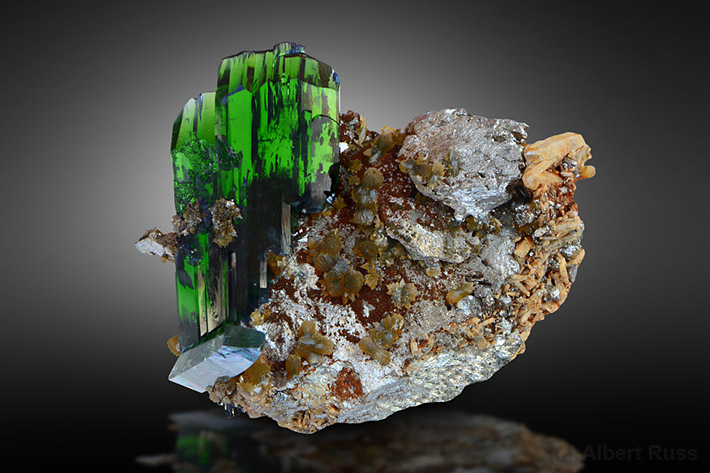 The color change is remarkable because it is the result of internal oxidation. That is, no molecule of water or oxygen enters the mineral lattice from outside, and none leaves. Instead, a visible light photon enters the lattice, knocks a proton from a water molecule, and creates an unbalanced hydroxide ion (OH-). To compensate, one of the contained Fe2+ iron ions gives up an electron to become Fe3+, balancing the charge. The result is a darkening and permanent color shift in the mineral. Ultimately, the specimen will convert much of its Fe2+ to Fe3+, lose 1 of its 8 H2O, and morph into metavivianite, ideally Fe2+Fe3+2(PO4)2(OH).7(H2O), also known as kertschenite. The technical term for the process of proton loss is deprotonation. 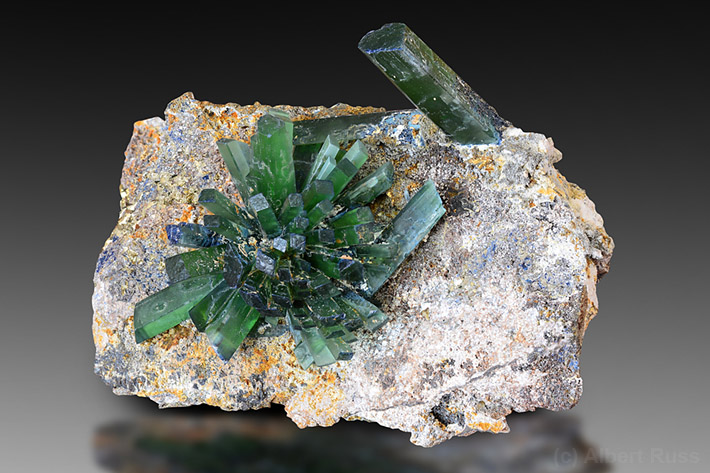 Because vivianite is notorious for darkening upon exposure to light, this instability is reason enough to keep all valued specimens in darkness, and only expose them to light during the short period of time in which they can be admired.

Vivianite is a secondary mineral found in a number of geologic environments: in phosphate-rich granite pegmatites, in clays and glauconitic sediments, and in Recent alluvial deposits where it replaces organic material such as peat, lignite, bog iron ores and forest soils. Vivianite also replaces teeth and bones buried in peat bogs, and can nucleate within the shells of bivalves and gastropods. The best crystal specimens featuring a gem-quality green color are recovered from hydrothermal vein systems. 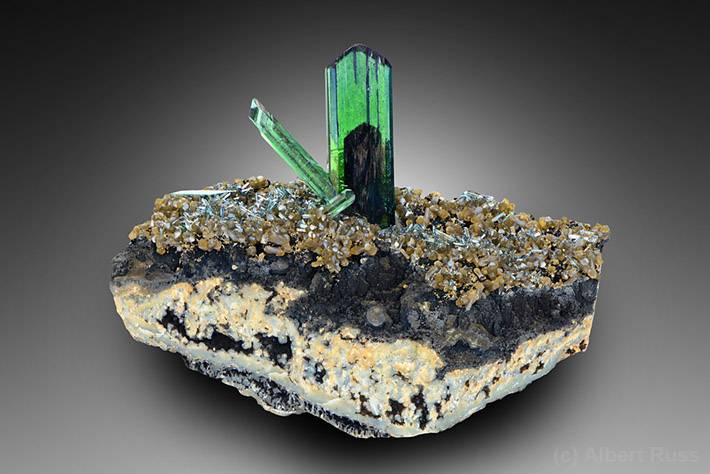 There are almost no current practical uses of vivianite. There are 3 feebly documented applications:

There is a suggestion that painters may have used powdered vivianite in blue oil paints in 17th century Baroque and Rococo painting to allow the sky tones to deepen into darker blues (through self-oxidation), rather than rely on powdered azurite, which slowly alters a sky to malachite green. 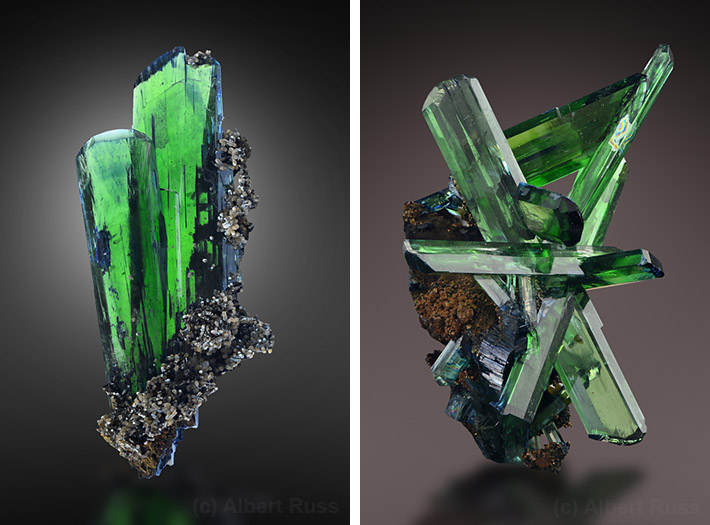 In modern times, there has been at least one attempt, reported in Spain in 1991, to apply vivianite as a soil amendment to combat iron deficiency in calcareous soils. (Vivianite has been tried, from time to time, as a phosphate soil amendment). Aside from issues of cost and application, the question not pursued in the research was whether the vivianite amendment could promote the release of Fe over several growing seasons. 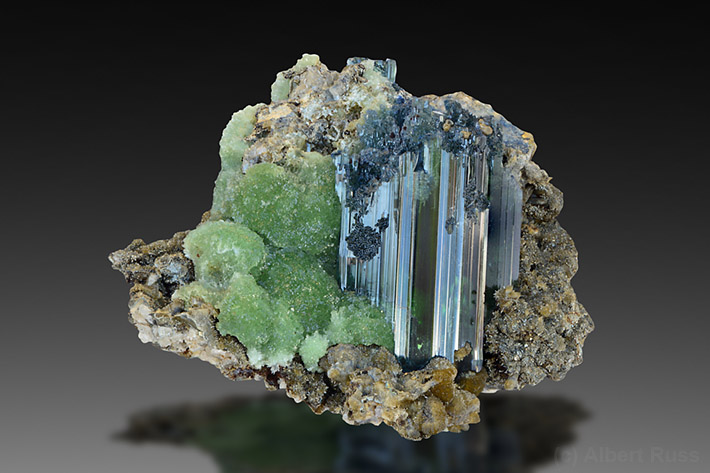 Finally, there has been abstract speculation that the free migration of the liberated proton (in self-oxidation) might permit vivianite to be considered for use in hydrogen fuel cells, since other proton-transmissive lattices are studied for the same purpose.

The type locality for vivianite is Wheal Kind, St Agnes District, Cornwall, England. The world's largest vivianite crystals (more than a meter long) were recovered in Cameroon. Classic vivianite localities are in sedimentary iron ores and in fossil shells in the Kerch and Taman Peninsulas on the Black Sea. 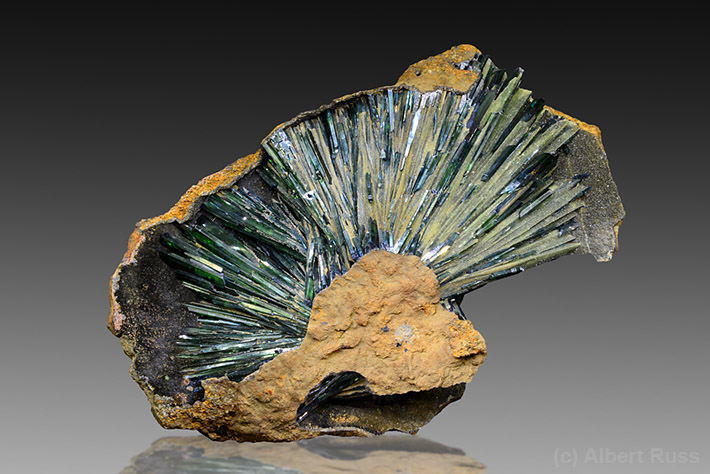 Recently, the best specimens on the market are from Bolivia: Vivid green prisms (~ 5-6 cm) embedded in altered red sandstone, were discovered in 2004 in Tomokoni Mine, Machacamarca District, Potosi Department. Crystals to 10 cm occur at the Siglio XX tin mine and transparent bottle green crystals to 10 cm came from the San Jose/San Firmin vein, Llallagua, Potosi Department. In general, the vivianite occurs as prismatic crystals on a matrix of botryoidal goethite derived from the alteration of pyrite and marcasite.

Numerous occurences are in Brazil: Cigana Mine, Galileia, Minas Gerais, with muscovite and pyrite. Typically wedge-shaped crystals of vivianite to 11 cm across, smoke-blue color and good transparency on a matrix of sharp silvery muscovite plates, some with druses of pyrite microcrystals. 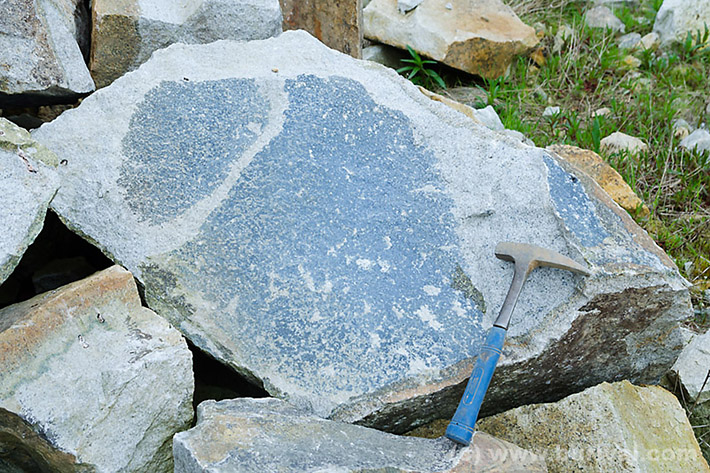 Vivianite occurs in the limonitic ores in Amberg-Auerbach and in the pegmatites of Hagendorf-Pleystein area, Bavaria, Germany. Trepča Mines, Stari Trg, Kosovo, produced prismatic crystals up to 10 cm long and 2 cm thick. Deep green in color and transparent, commonly resting on pyrrhotite or pyrite.

Vivianite was found along fractures in rocks rich in graphite, pyrite and pyrrhotite at Nagasawa, Iwama-machi, Ibaraki Prefecture, Japan. It is intimately associated with pyrite and occurs as very thin tabular crystals, up to 10 cm in length. Blue-green gem-quality crystals to 8 cm long came from the San Antonio Mine, Santa Eulalia, Chihuahua, Mexico. Bog iron at Côte St Charles, Vaudreuil-Soulanges, Montérégie, Québec, Canada, has some vivianite too. 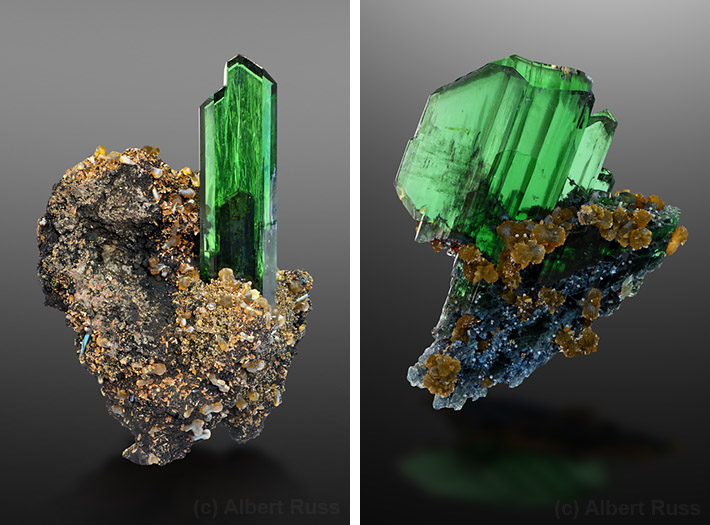 Vivianite occurs at many sites in the USA: In diatomite in a Tertiary lake bed near Burey, Shasta County, California. In green (glauconite) sand at Middletown, New Castle County, Delaware. Other sites include Blackbird Mine, Lemhi County, Idaho. Crystals in shades of pink, green, grayish blue, purple and purplish black, as well as colorless. The unique deep purple color of some Blackbird mine specimens is characteristic of the locality. Some single crystals have both purple and green zones. Vivianite crystals from the Blackbird Mine are usually elongated and blade-like, occurring as singles and groups on dark altered schist and on white quartz. Vivianite is abundant in the pegmatites of Newry, Maine.