In the last few years, reality shows with prospectors and minerals became quite widespread. Despite some exaggeration, these shows still might be quite interesting and there is a lot to learn. This overview covers The Gold Rush, The Prospectors and The Ice Cold Gold.

Definitely the best known prospecting show is the famous Gold Rush produced by the Discovery Channel. In the first season, various group of miners work the gold placer deposits in the Alaska. All miners moved to much bigger claims in Yukon Territory, Canada, later. 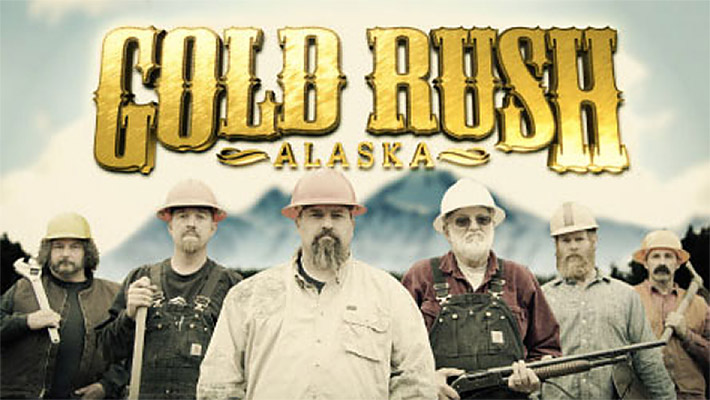 Despite some exaggeration of less-serious situations, the show offers a lot to see and learn, not only regarding geology and mining, but also regarding business, planning and teamwork. The growth from small scale mining in the first season to serious business in the sixth is quite impressive.

Yet the mining is not without problems: proper planning, sampling, or assays, for example, are often not properly explored. I would never invest tens or even hundreds of thousands of dollars into stripping untested ground. Worse, the teams sometimes engage in trully wildcat exploration projects.

Of course, long term and sustainable operations can not work that way. There needs to be proper planning, exploration, testing, secured budget.

Season 4 was a lot of fun, as the Todd Hoffman went into the jungle adventure, mining gold and diamonds in Guyana. Unfortunately, the Guyana expedition turned into disaster for Todds team. The results were extremely poor and Hoffmans almost quit gold mining. Fred Hurt moved to Cahoon Creek and Parker Schnabel started guest mining in Klondike on the claim of Tony Beets. Parker completely shamed all the others miners, bringing in an outstanding 1,029 ounces. 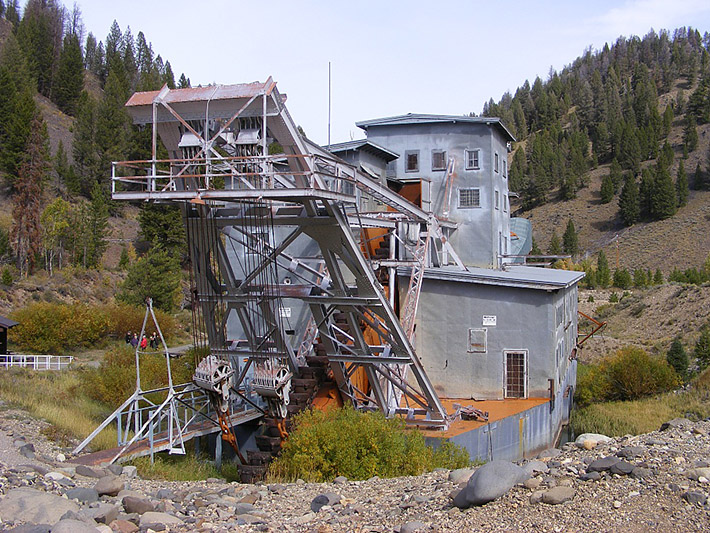 Historic gold dredge on Yankee Fork, Idaho - quite similar to the one used by Tony Beets. Photo: glyphwalker

By season 5, Fred Hurt was no longer interested in doing the show anymore. New teams were formed by the Dodge brothers, Dave Turin, and the Tony Beets family. Unfortnately, the Dodge team had to leave the show when Dave Turin returned to the Hoffmans team. Tony Beets started a solitary and unique journey when he bought, disassembled, moved, and assembled again an old gold mining dredge. The season set new records for Todd Hoffman (1,349 oz.) and Parker Schnabel (2,538 oz.).

Season 6 began with the main teams the same as they had been at the end of season 5. However, Parker lost part of his team - including foreman Gene Cheesman, because of his aggressive push at the end of the previous season. Tony Beets also pushed mechanics Jerry Rhodes and Mike Krisher too much and later ended up firing both. Tony started mining with his gold dredge and the race between Parker and Todd heated up. 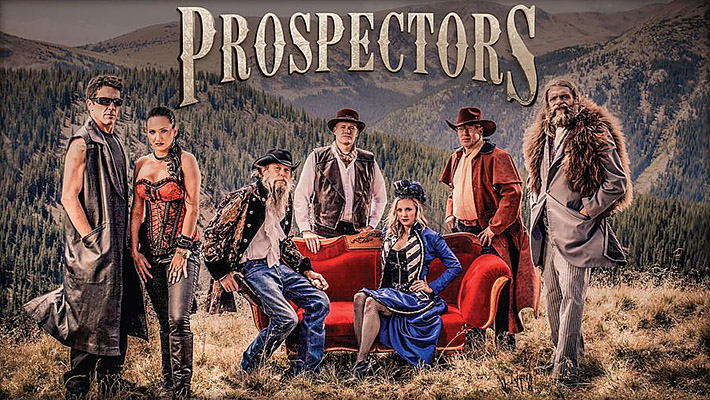 Cast of the 2013 season of the Prospectors. Photo: Weather Channel/High Noon Entertainment

Steve Brancato discovered the best known US pocket with aquamarine on Mt. Antero, where Amanda Adkins, Travis Anderson, and the Cardwells also have their claims. Some finds were quite unremarkable: smoky quartz, small aquamarines, feldspars, and baryte. Others were quite impressive: Dwayne Hall and Amanda Adkins found some nice aquamarines; Rich Fretterd with Jean Cowman discovered very nice and sizeable topaz crystals. And lastly, the Dorris family found two enormous pockets of smoky quartz and amazonite in the Lake George area. 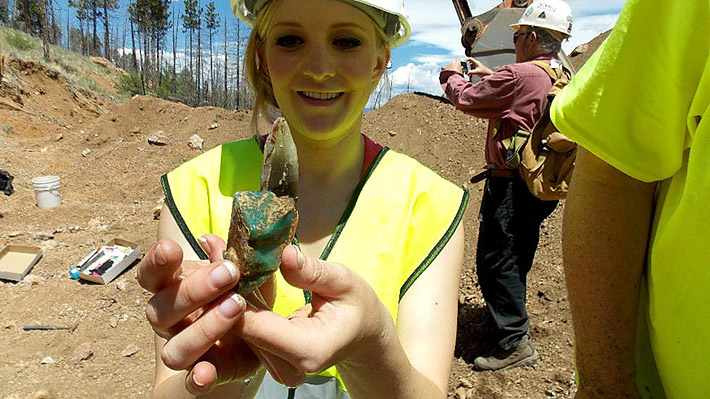 Season 1 (9 episodes), Season 2 (8 episodes) and Season 2 Specials (3 episodes) were all made in 2013. Season 3 (10 episodes) was made in 2014 and Season 4 in 2015. Most localities in the show are miarolitic (read pocket rich) pegmatites in the Mt. Antero, Mt. White and Lake George areas. These pegmatites often contain pockets with smoky quartz, aquamarine, topaz and also very popular amazonite. Less common minerals are fluorite and phenakite. The gold mines in Colorado are also explored. 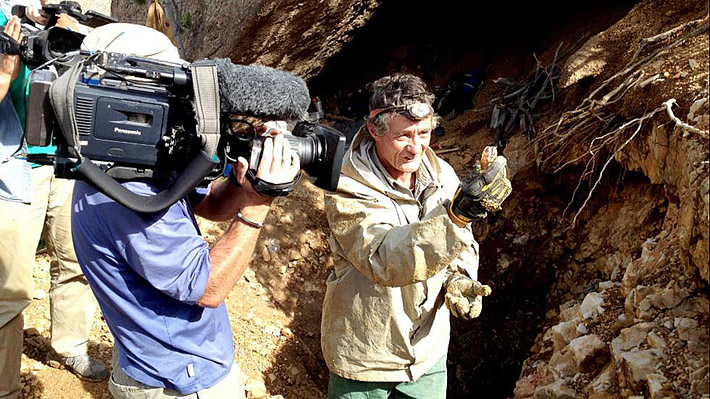 The repetitive exaggeration of danger is quite annoying. Prospecting in the Rockies is certainly dangerous, but occasional lightning or rock slides are hardly a big deal. Experienced hikers and rockhounds easily handle these and other hazards. Despite all of these cautions, stupidity abounded: basic safety was ignored in some very unstable holes. There were also issues with proper claim permits and reclamation work after first two seasons. 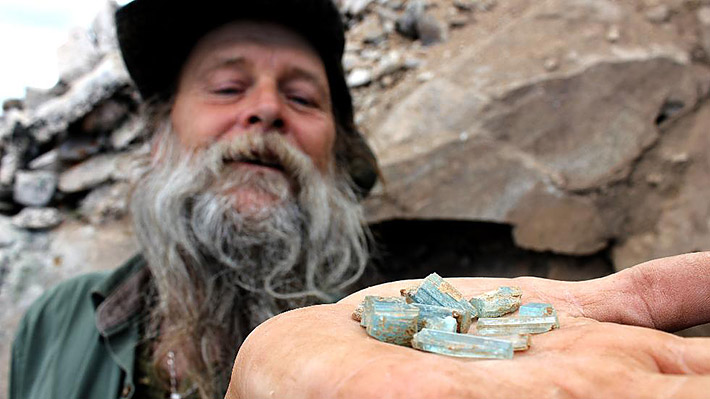 Dwayne Hall showing some of his aquamarine finds from his claim on Mt. White. Photo: Weather Channel/High Noon Entertainment

Exaggeration of the value of the minerals is another problem. Colorado is far from being the top producer of high-quality smoky quartz, fluorite, topaz or aquamarine. With the exception of the amazonite pockets mined by the Dorris family and topaz found by Rich Fretterd, none of the other finds are really world class quality.

However, what many rockhounds consider quite annoying in the show is the lack of proper presentation of the finds: we get to see every single lightning strike and falling rock five times, but the interesting mineral specimens are shown just once, and only for a few seconds.

Very nice documentation is available at Dorris website. Many nice pictures and detailed description of the Lucky Monday Pocket with stunnig amazonite and smoky quartz were described in the Minerals #6, great topaz finds by Rich Fretterd were published in Minerals #9.

The quite different level is prospecting on Greenland, where the show Ice Cold Gold - produced by Animal Planet - takes place. Despite its name, the first two series were mostly about discovery of an impressive ruby deposit. Later, the prospectors group from 60 Degree Resources lost their ruby claim because of unspecified problems with permits and returned their focus to gold. Wildcat prospecting in remote and unexplored areas is pretty interesting. 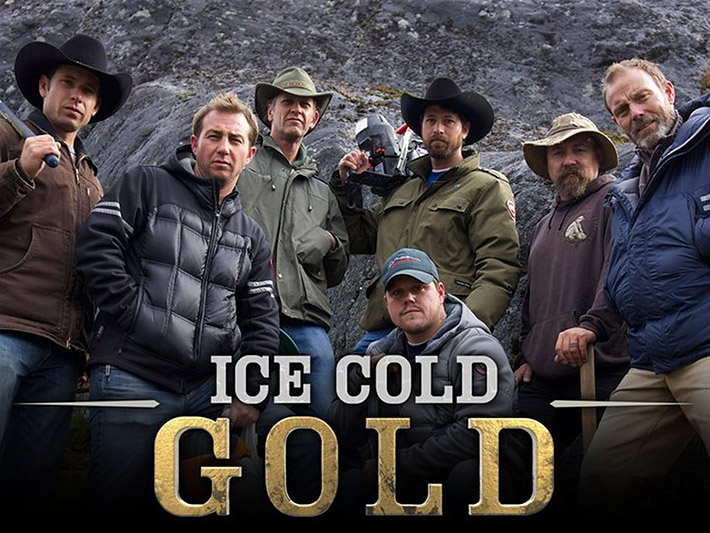 However, the actual prospecting techniques is sometimes more reminiscent of the Prospectors show than of experienced field geologist work. Amazing landscapes make watching the show worthwhile, and there a lot to see and learn about working in remote areas. Unfortunately, the 2014 season was the last one. 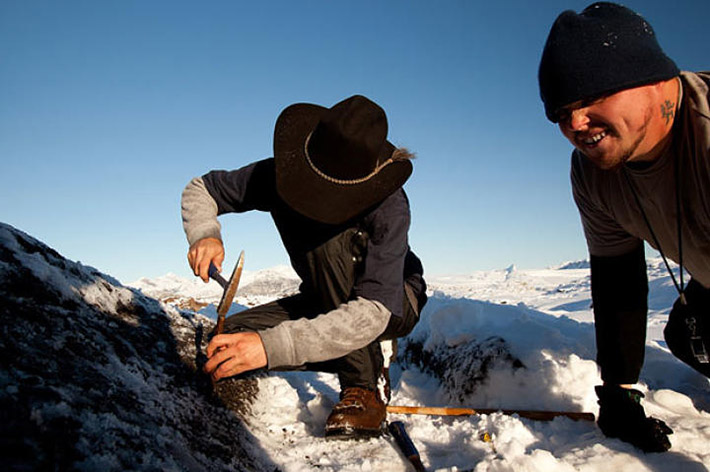 Sampling the "red zone" with rubies in the southern Greenland. Photo: Animal Planet

The team has only one geologist (Eric) but despite his attempts, the team's prospecting technique is random and lacks a systematic approach. Their resources are obviously limited and often spent on too many targets instead of systematic sampling of one good place. In this case, arguments in the group, lack of proper planning and the team's sometimes very risky approach to the wilderness provide enough fun for everyone!