Pseudomalachite is a common dark green secondary copper mineral, forming nice botryoidal or drusy specimens. Its popular among mineral collectors and usually occurs together with many other copper minerals.

Pseudomalachite is a hydrated copper phosphate Cu5(PO4)2(OH)4 which crystallizes in the monoclinic crystal system. Rare crystals reach only few milimeters in size and are usually rough and rounded, with uneven faces. More commonly, pseudomalachite occurs as a compact, reniform or botryoidal. Less commonly, it may be crusty, fibrous or filmy. Twinning is present on {100}. 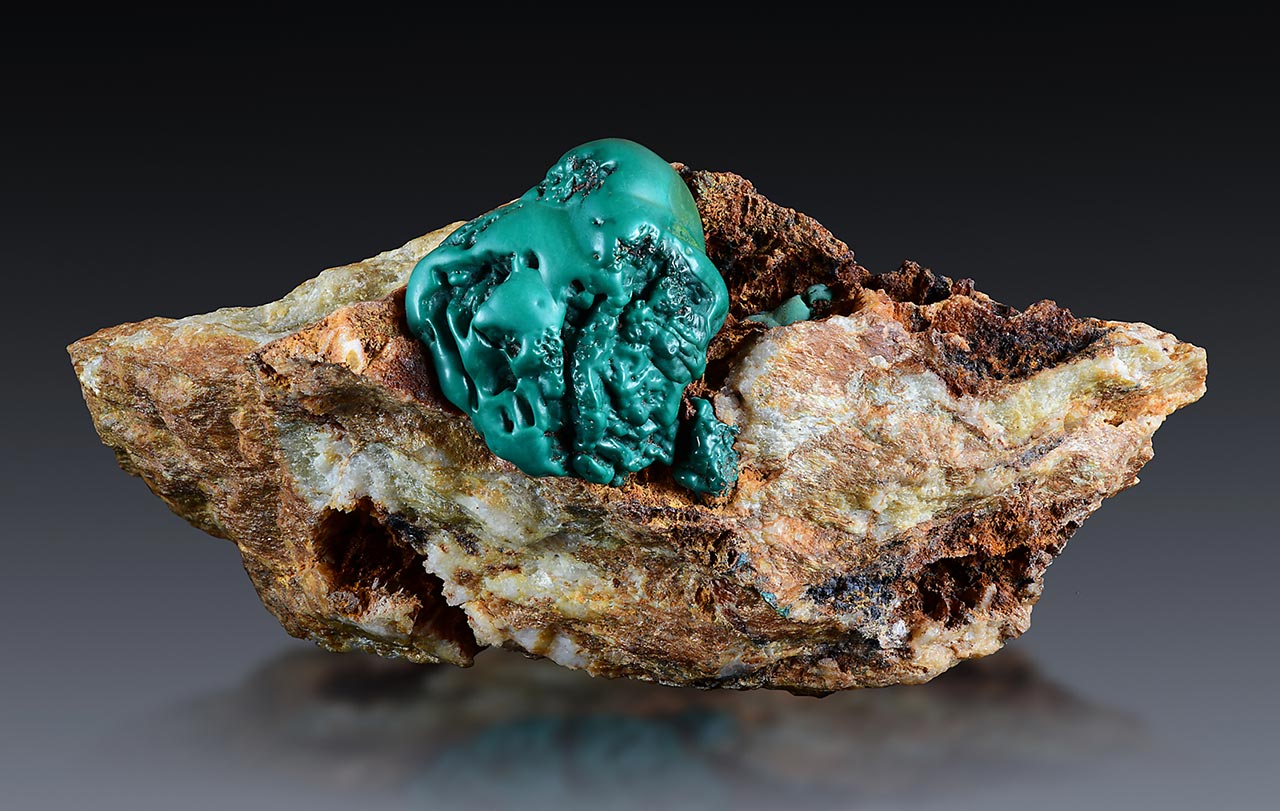 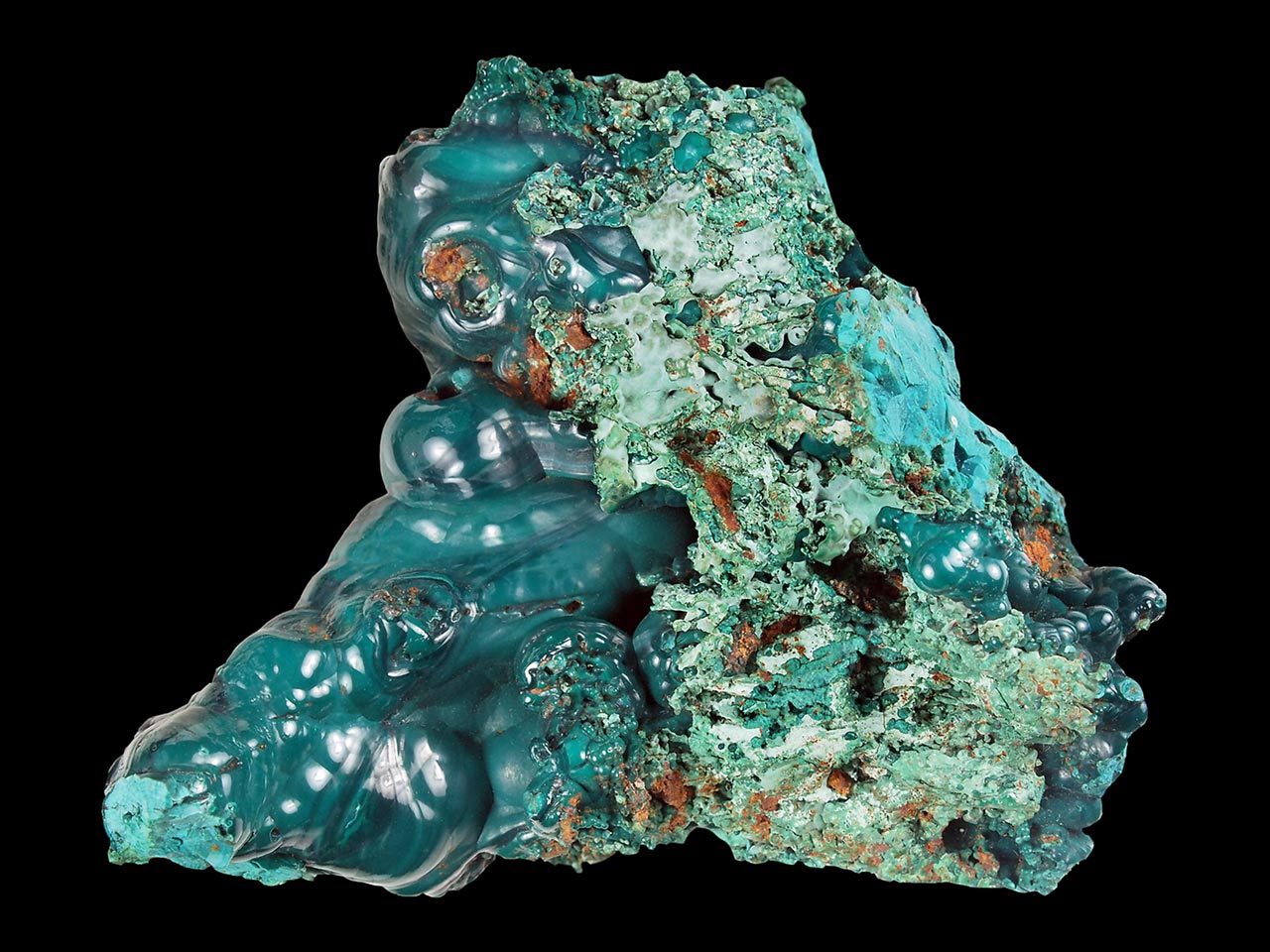 Cleavage is perfect on {100} and distinct on {010}. Luster of pseudomalachite is vitreous and its fracture is splintery or conchoidal. Its hardness is 4.5-5.0; its streak is blue-green, noticeably paler than the parent. Its density is 4.15-4.35.

Pseudomalachite is soluble in warm hydrochloric (muriatic) acid, but without displaying the effervescence typical of malachite.

As the name suggests, pseudomalachite is very similar to the malachite Cu2(CO3)(OH)2. And even worse, they are both secondary copper minerals, often present together on the same localities. Crystalline pseudomalachite has obviously different shapes then typical needle shaped crystals of malachite. But botryoidal and crusty aggregates are almost impossible to distinguish from each other.

Many other secondary copper minerals are green and often occur together, having two or three green secondary copper minerals on one specimen is common. Namely tiny drusy or botryoidal ludjibaite and reichenbachite occur often together with pseudomalachite. Distinguishing massive, crusty, drusy or botryoidal specimens is very difficult without advanced analytical methods.

Pseudomalachite is polymorphous – that means it has the same chemical composition but different structure and physical appearance – with two other copper phosphates: ludjibaite and reichenbachite: 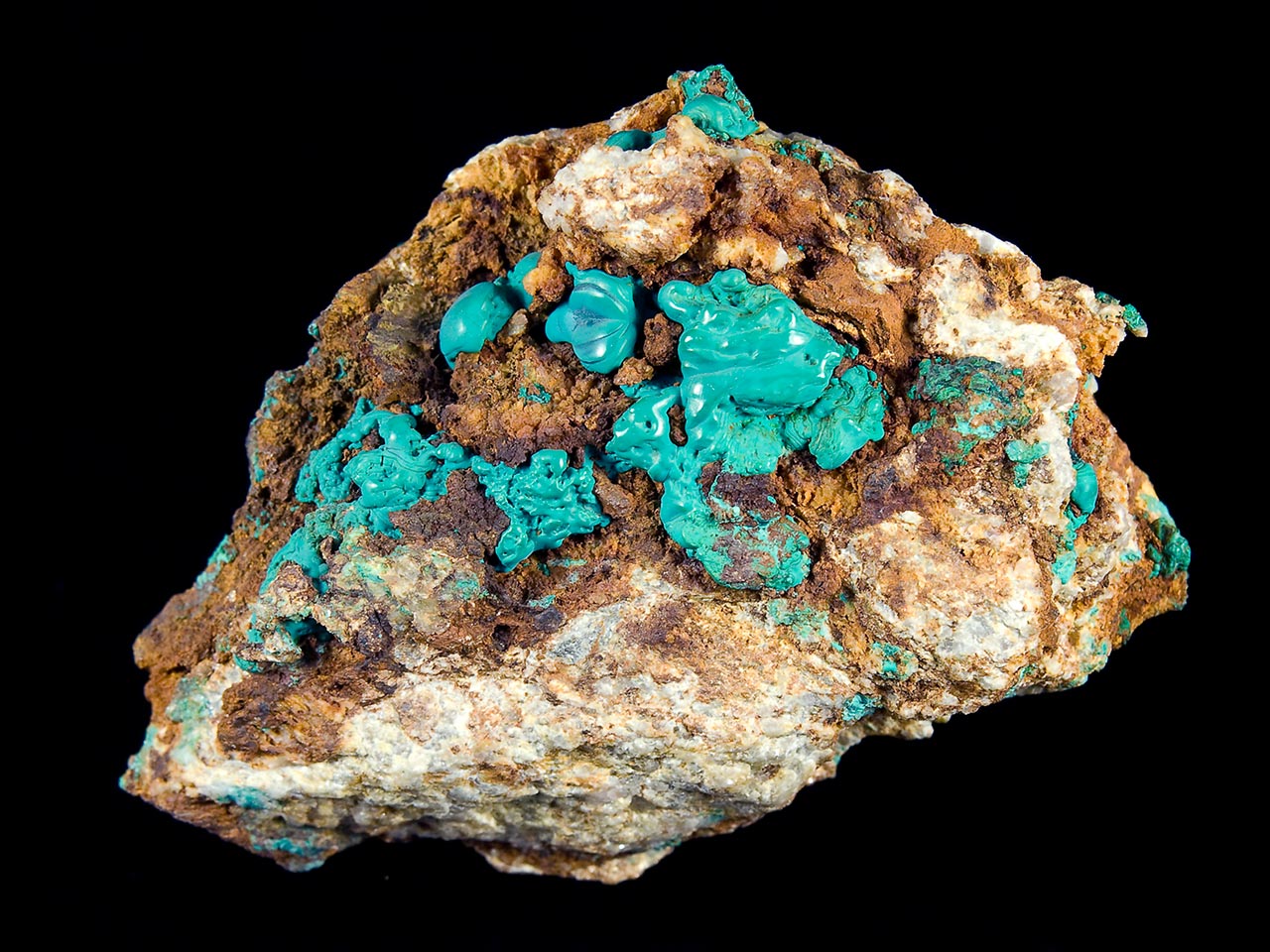 As a secondary copper mineral, pseudomalachite is usually associated with copper ores like chalcopyrite, tetrahedrite or bornite and products of their oxidation: azurite, malachite, chrysocolla, cornetite, cuprite, atacamite, libethenite and many others.

Pseudomalachite was first described in 1812 by C. C. Leonhard from Ľubietová, Slovakia as a “Phosphorkupfer” (copper phosphate). Unfortunately, in the same publication another pseudomalachite was described from the Virneberg Mine, Rheinbreitbach, Rhineland-Palatinate, Germany as a “malachite”. Pseudomalachite name was first introduced in 1813 by J. F. L. Hausmann, but many pseudomalachite specimens were later incorrectly identified and published under various names (Phosphorcalcit, Ehlit, Lunnit, Dihydrit). This lasted until 1950 when L. G. Berry analysed many of these specimens and united them under the currently valid name pseudomalachite.

Despite the original error of C. C. Leonhard, the type locality currently is the Virneberg Mine. 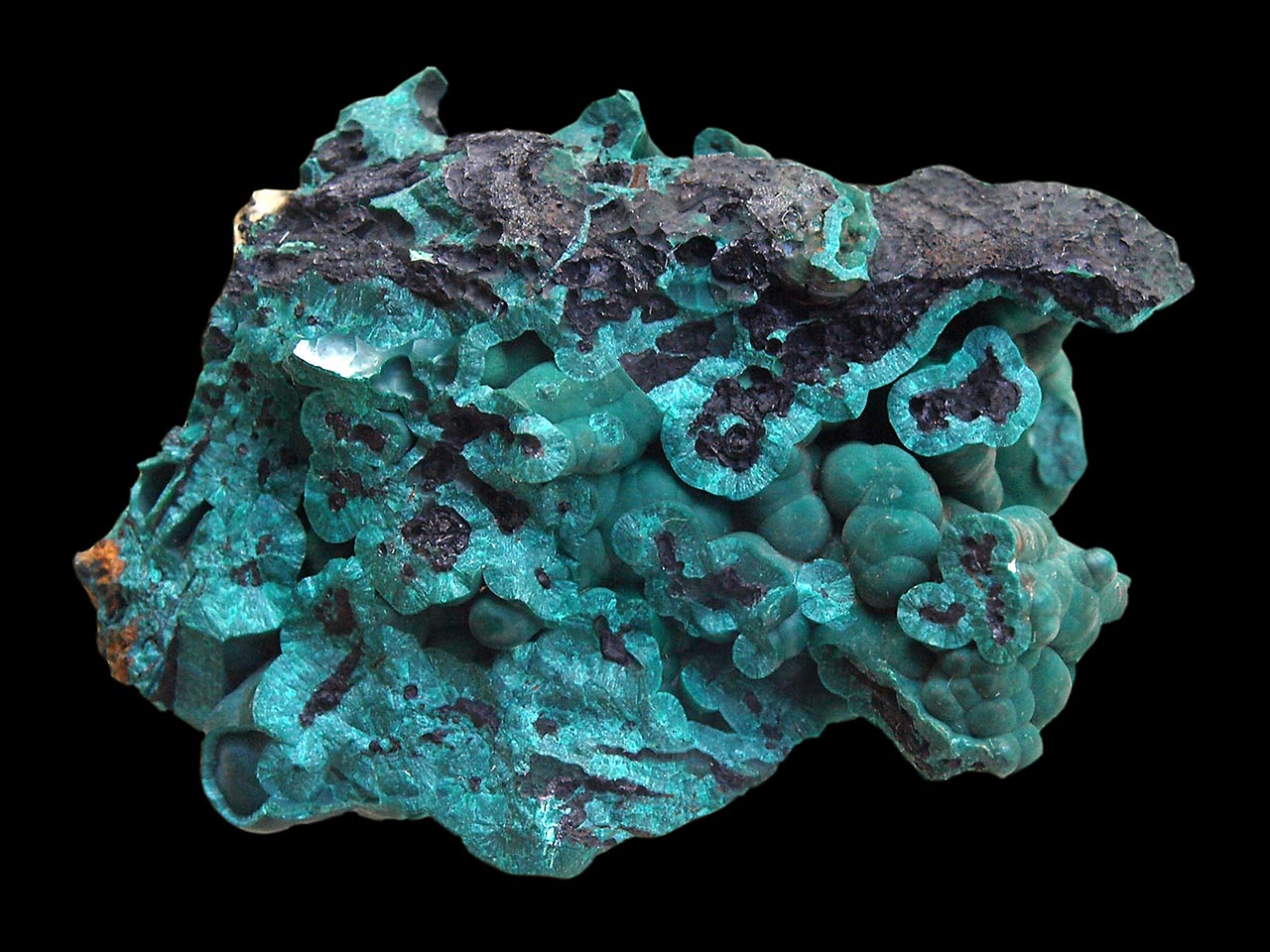 Pseudomalachite is a secondary mineral found in the oxidized zones of copper ore deposits. Its formation requires presence of the copper as well as the phosphorus in the system and is generally much less abundant then its cousin malachite.

Pseudomalachite is a common secondary mineral in copper deposits, with no dedicated special industrial application. It forms too small and irregular accumulations to be mined as an ore and has no other special features to be used in industry or jewelry. So its use is solely as the mineral specimens for collectors.

Occurrences of pseudomalachite are ubiquitous, occurring in all inhabited continents and many countries. 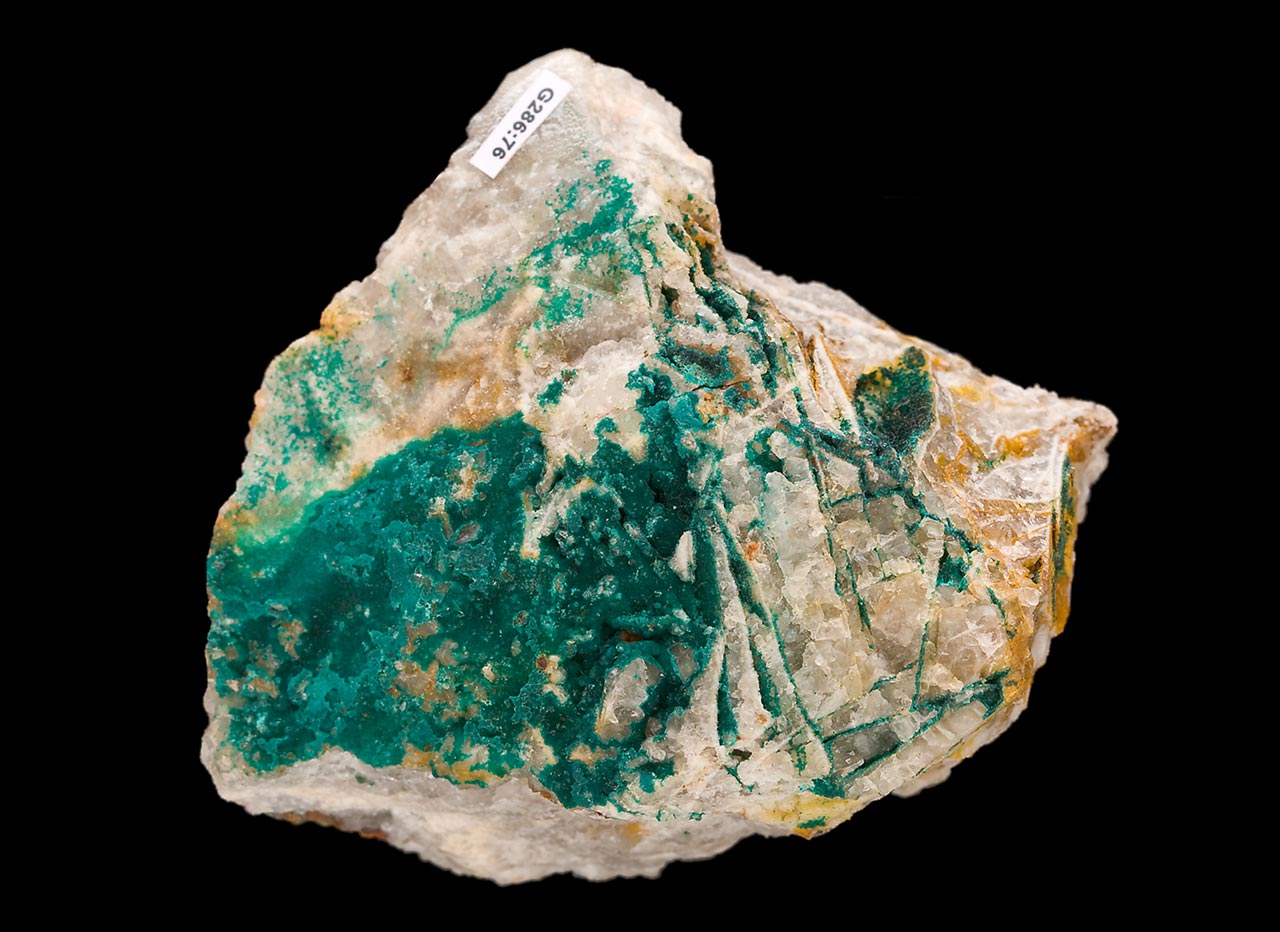 Other notable localities worldwide include: Manto Cuba Mine and Chiquicamata Mine, Atacama Region in Chile; West Bogan mine in New South Wales and Burra Burra mine, Mt. Lofty Ranges, South Australia in Australia; Nizhny Tagil and Bogoslovks, Ural Mountains in Russia.