Dioptase is a secondary copper silicate, occurring naturally as an oxidation product of hydrothermal copper deposits. It is renowned as a spectacularly colorful rival to emerald, but is too soft and too fragile to be cut as a gemstone, mainly because of its perfect cleavage.

Dioptase is a hydrated copper cyclosilicate CuSiO3.H2O (also reported as CuSiO2(OH)2). Dioptase structure is based on a 6-sided ring of SiO4 tetrahedrons, this structure is closely related to structure of beryl or cordierite. Based on the structure, the proper dioptase formula should be Cu6Si6O18.6H2O. 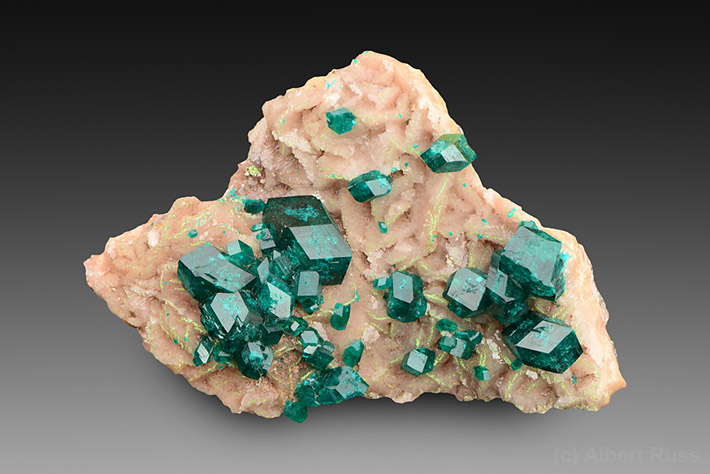 Dioptase is a member of the trigonal crystal system, usually crystallizing as doubly-terminated pseudohexagonal prisms terminating in rhombohedra. Dense aggregates of complexly linked crystals are its usual expression, but it may occur as isolated crystals or as acicular, botryoidal, drusy, radiating, grainy or massive forms.

Dioptase is invariably an intense emerald green or bluish green. The dioptase green is very hard to photograph, because it interferes with color scheme of the camera sensors. 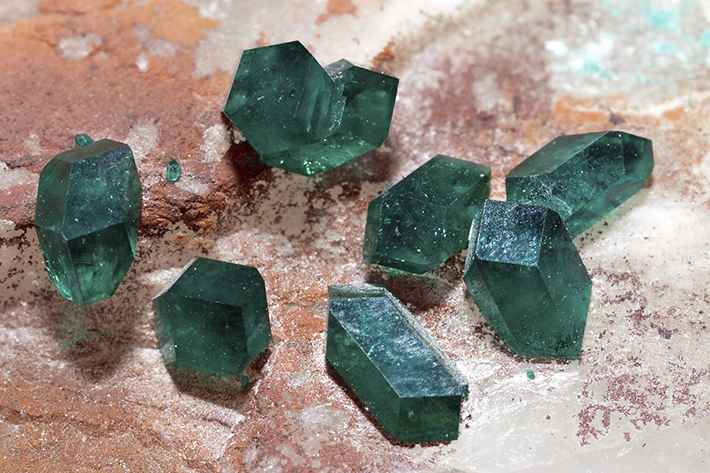 Dioptase is exceptionally fragile and specimens must be handled with great care. The fragility of dioptase makes it unsuitable for gemstones, and ultrasound cannot be used to clean specimens without risking shattering the sample. Despite being silicate, dioptase can be dissolved in hydrochloric acid.

18th century miners in Kazakhstan (at the Altyn-Tyube Mine, Karagandy Province) discovered an enormous number of cavities filled with thousands of lustrous emerald-green transparent crystals. Initially mistakenly identified on site as emerald, analyses in Moscow quickly separated the new finds - hardness 5 - from the known established hardness 8 of emerald. 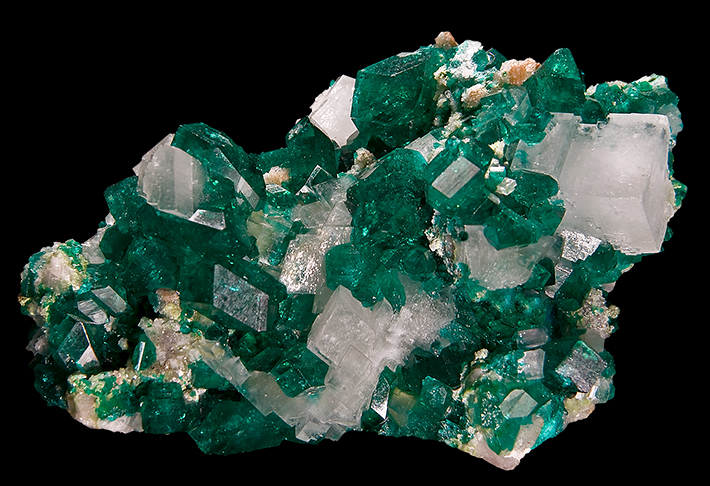 Shortly after, a renowned French mineralogist, Fr. Rene Just-Haüy, established the find as a previously unnamed mineral, and named it dioptase, a derivative of the Greek terms dia (through) and optasia (see) in recognition of its transparency, which showcases the high visibility of its cleavage planes.

Dioptase is typically only found in desert environments as an oxidation product of copper sulfide ore deposits. The reason is that migration of silica normally is only possible in high-pH (highly alkaline) environments. Typically, oxidation of copper sulfide ore minerals will generate highly acidic waters, in which silica will not dissolve. Normal water-rich environments usually result in more common secondary copper minerals like malachite, azurite, cuprite and native copper. Dry desert environments can produce alkaline conditions, which usually lead to formation of secondary copper silicates - chrysocolla and dioptase. 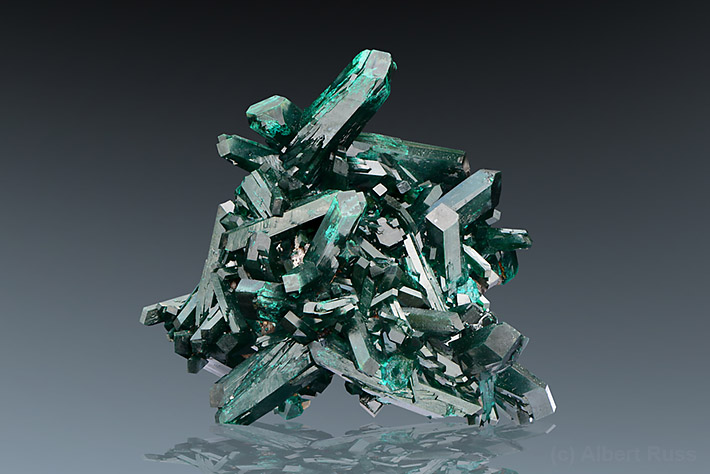 The explanation for copper silicates occurrence seems to be that the local presence of carbonate host rock will buffer the acidic solutions and, with enough geologic time, allow the silica to dissolve and recrystallize in dioptase. Recent research proved that silica is much more soluble than previously anticipated - especially in highly alkaline water.

Dioptase has had virtually no historic functional use except as a decorative motif in plaster statuary dating from 7200 B.C. in a Neolithic (!) settlement near Amman, Jordan. There, a set of anthropomorphic half-size human figures were created by molding plaster around a core of bundled sticks. The eyes were formed from cowrie shells, and highlighted by an outline of dioptase.

Dioptase is available for sale today as a somewhat pricey paint pigment (derived from microcrystalline sources, such as are found in Arizona mines). Current web pricing is about $4 (USD) per gram. 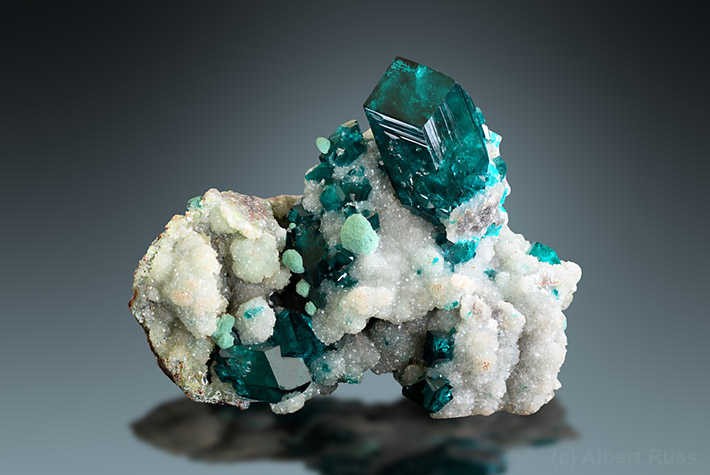 Dioptase is an extremely popular - and expensive - collectible. Only a handful of sites (including the original Altyn-Tyube Mine in Kazakhstan and a mineral locality at Tsumeb, Namibia) have produced exceptional crystals, and there are few new sources of large specimens. The production of good quality specimens is somewhat limited as both of the most productive mines are operated only as low-scale mineral specimen mining.

Few sites in the world contain dioptase specimens of any note, and two consistently provide spectacular examples, Altyn-Tyube in Kazakhstan and Tsumeb in Namibia.

The Altyn-Tyube in Kazakhstan, as noted earlier, figured prominently in the discovery of dioptase as a new mineral species, when samples were mistakenly suspected to be emerald. The samples formed as encrustations on a brownish quartzite in the mine workings. Dioptase often forms crystals in the vugs in limestone rocks, it is often associated with calcite. There is only small scale specimen mining operated, more information is available in field trip report by Jolyon Ralph. 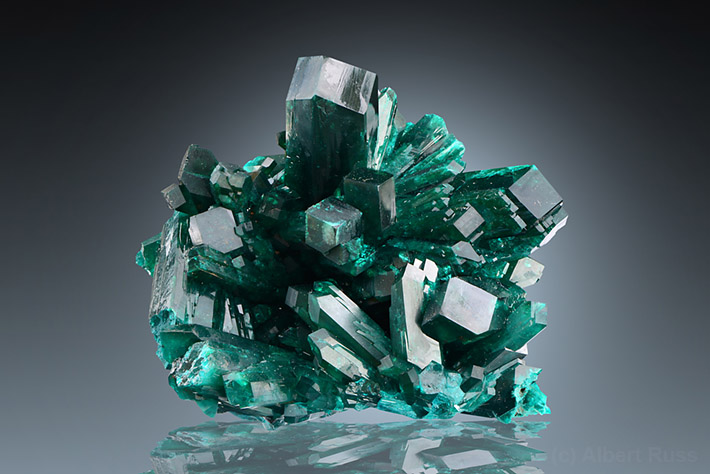 The Tsumeb deposit is widely revered as the Mecca of world mineral treasures, owing to its abundance of spectacular mineral specimens including huge amount of rare secondary minerals. The Namibian site is the host of a thick sequence of steeply dipping Precambrian shallow-water carbonates. The deposit is a moderately-dipping, long, pipe-like body of copper-lead-zinc-silver sulfides crossing one stratigraphic interval of dolomites at a shallow angle to the enclosing beds dipping at 60o, and continues to a depth of >1700 m. At depth, the pipe suddenly steepened from a 45o angle to near vertical, requiring a substantially larger investment in underground development.

The surface expression of the pipe is an ellipse oriented NW-SE measuring 25 x 6 m; at depth, the ellipse maxes out at 225 x 90 m. The pipe is locally attenuated by multiple slip planes and shears within the bedding, creating a chaotic mix of local collapse breccias and locally oxidized intervals. Detailed mapping makes it clear that multiple episodes of mineralization (ca. 550 MA), structural disturbance and secondary oxidation occurred, rendering the geologic history extremely complex and difficult to unravel. Consequentially, it also created multiple opportunities for the formation of many interesting minerals - including dioptase, whose crystals are described as lustrous and transparent, sitting on a snow-white carbonate. 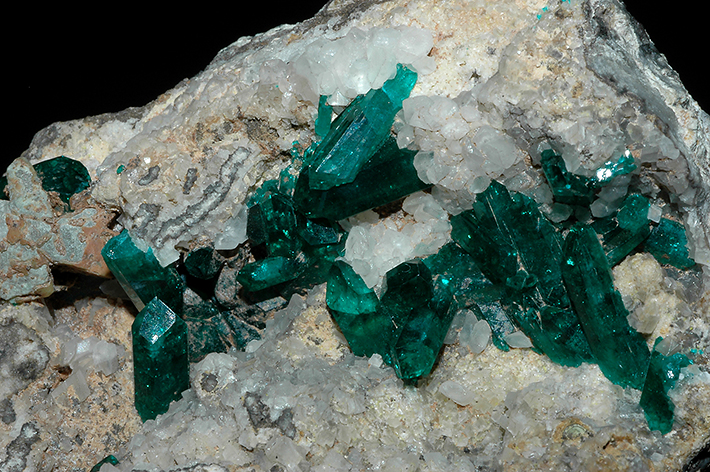 The Kaokoveld Plateau in Namibia produced excellent samples of dioptase on shattuckite. Other dioptase localities of note in Africa are the copper mines of the Katanga Copper Belt in Zaire; and the Mindouli and Reneville areas of the Democratic Republic of Congo.

Argentina hosts one famous locality, the Malpaso Quarry near Dumesnil, Córdoba where small crystals of dioptase are found. Site descriptions claim that dioptase appears to be a primary mineral, having crystallized together with quartz, native copper and malachite, an observation inconsistent with other site descriptions of dioptase.

Arizona is the only significant source of dioptase in the continental US, and the major occurrences are recorded in historic mines lying in an E-W belt of early Tertiary porphyry copper intrusions in southern Arizona: Mammoth-Saint Anthony Mine, near Mammoth, Pinal County; Christmas Mine, near Hayden, Gila County; and Morenci, Greenlee County. All such sites are characterized by microcrystals, variously noted as radiating, drusy or encrusting.