Prehnite is a common calcium silicate, which can form outstanding crystalline aggregates. Its nice crystal forms and pleasing colors make it a very popular among collectors. Prehnite is also used by jewelers and it is an important metamorphic index mineral.

Prehnite is a silicate of calcium and aluminum with the formula: Ca2Al(AlSi3O10)(OH)2. Limited Fe3+ substitution for aluminum is possible in the structure, other common impurities include Ti, Mg, Na and K. Prehnite belongs to the orthorhombic crystal system, and is composed of interlocking chains of silica tetrahedra in the Si:O ratio of 4:11.

It most often forms as botryoidal aggregates, with only just the tops of small curved or composite crystals showing any faces. Crystals may also be curved, wedge-shaped, stalactitic, globular or reniform. Bubbly crystal masses may develop into epimorphs (hollow casts) of anhydrite, glauberite, or laumontite. 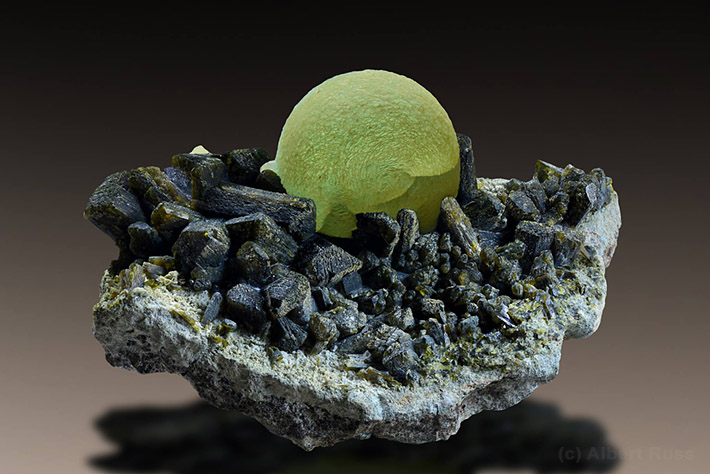 Its most distinctive features are its habit of finger-like growths, and its ability to encase another mineral undergoing dissolution and create thereby a hollow cast of the parent mineral.

Prehnite occurs in many shades of green: light, mint, yellowish, brownish, bluish and dark. Less often, it is colorless, blue, pink, or white. Pure prehnite is colorless; its colored varieties are caused by impurities in the structure. Green color is caused by the presence of Fe3+. 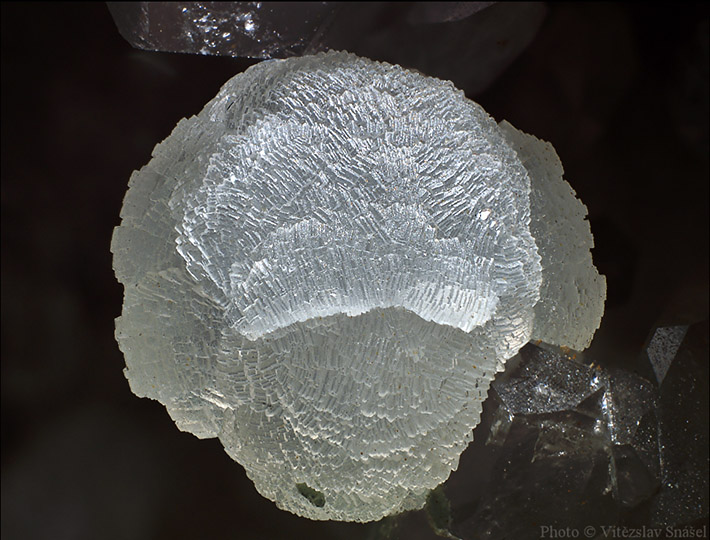 Prehnite is translucent, not pleochroic, and mildly fluorescent in blue (short wavelength UV) and in yellow (long wavelength UV). Cleavage is good on {001} and poor on {110}. Its luster is vitreous to waxy to pearly. Its fracture is uneven and brittle. Its hardness is 6.0-6.5, its streak white to colorless, and its density is 2.80-2.95.

Colonel Hendrik von Prehn (1733-1785), military commander at the Dutch colony at the Cape of Good Hope, South Africa is credited with the discovery of the mineral in 1774 in his rambles among the Karoo dolerites of the Eastern Cape Province. He brought the first specimens to Europe. Through unexplained circumstances, the renowned German geologist, Abraham Gotttlob Werner, came to name the mineral prehnite in 1788, in honor of the Colonel. 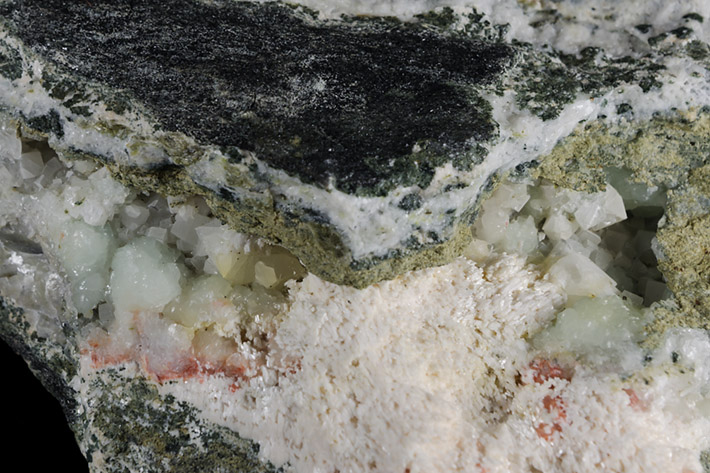 Prehnite carries the twin distinction of (allegedly) being the first mineral named in honor of an individual, and of provoking the first essay (Richard Chenevix, 1813) denouncing the practice!

Prehnite is a common calcareous aluminosilicate mineral occurring in two typical environments, either as a low-temperature alteration product found in cavities and veins of volcanic rocks, or as a low-temperature index mineral in the lowest member of conventionally-described metamorphic facies sequences (prehnite-pumpellyite; greenschist; amphibolite; granulite). 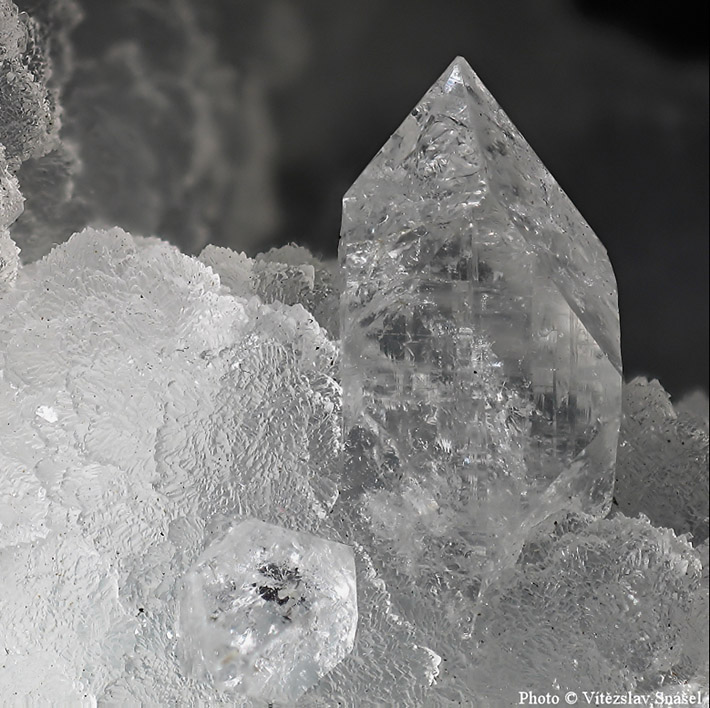 Prehnite is often found associated with zeolites in veins or cavities of basaltic rocks. Zeolites, of which there are dozens, are microporous aluminosilicate minerals usually produced by weathering or hydrothermal alteration of both silica-rich and silica-poor volcanic rocks.

Prehnite is prized as a collectible and used as a minor gemstone; dealers are known to enhance its luster by adding oils to the surface. Historically, prehnite is known from China as a polished ornamental stone, also used for inlay work. 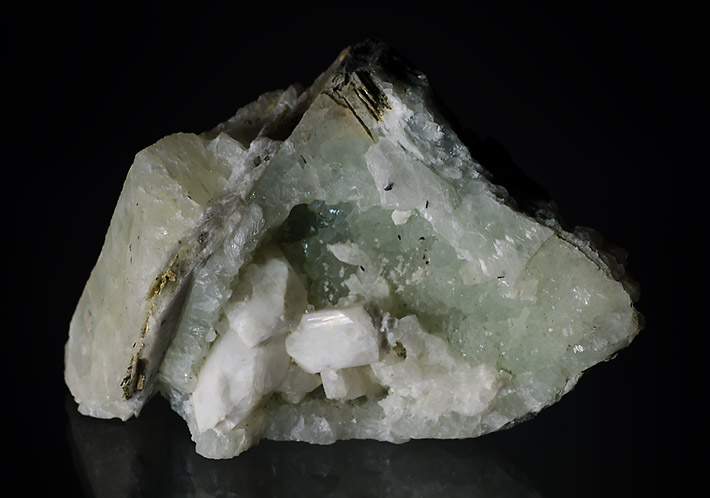 The best endowments of prehnite appear to occur in selected areas of Canada, the United States, Africa, Australia, India and China.

A unique form of prehnite was found in the Jeffrey Quarry in Asbestos, Quebec, Canada, as large, individual and flattened dipyramidal crystals and clusters.

In the U.S., the occurrences are mostly related to both basalt quarries and the lower-grade metamorphic terrains of the northern Appalachians, in New Jersey in particular as well as Connecticut and Massachusetts. 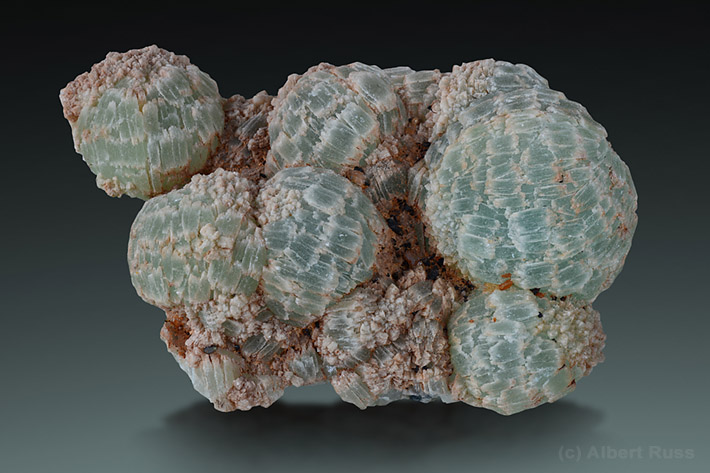 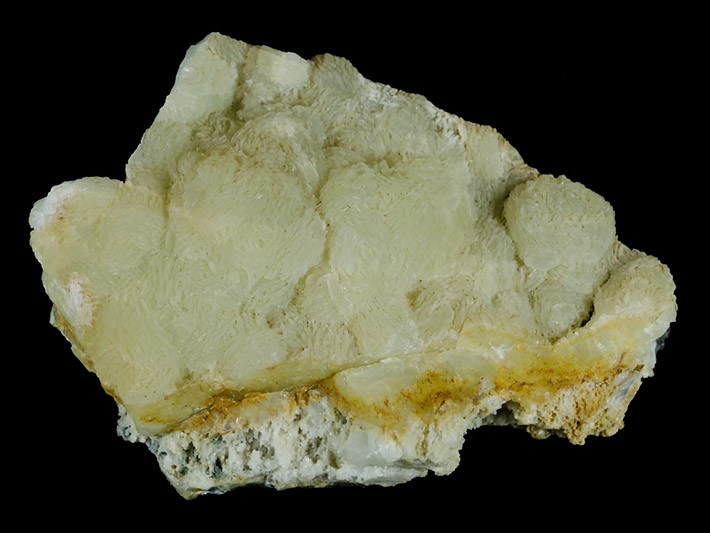 Africa hosts several outstanding sources of prehnite in Mali, Tanzania, Namibia and South Africa. The most developed deposits are in the Kayes Region of Mali, where the prehnite occurs as perfect thick formations associated with dark epidote. Specific Kayes occurrences include Djouga (Bendoukou), Diakon, Sandare, and Sadiola.

The principal Australian occurrences are at the basalt tableland surrounding Wave Hill Station in the central Northern Territory and the Prospect and Mullaley areas of New South Wales. 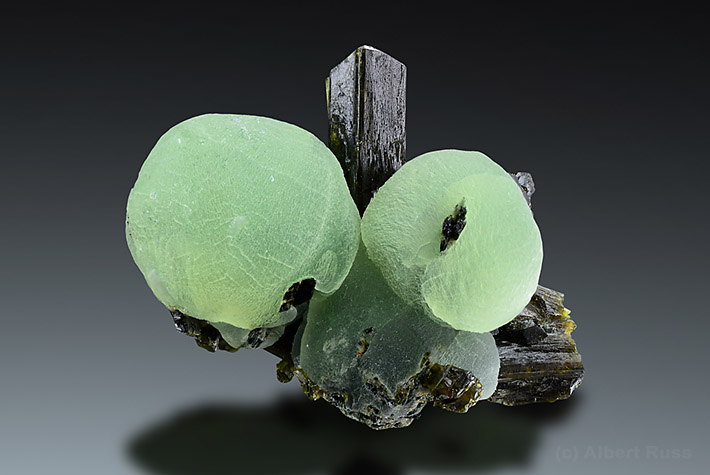 The Kandivali Quarry, Mumbai, India is the home of large and exceptionally delicate masses of prehnite epimorphs after laumontite. In China, Qiaojia (Yunnan Province) and the Hongquizhen Quarry, Meigu (Sichuan Province) have supplied several new deposits of gem-quality prehnite.

Some notable occurrences of prehnite are to be found in Europe too, in particular the Oficarsa Quarry, Carchelejo, Spain and Bourg d'Oisans, Isère, France. Nice prehnites are known from many Alpine type veins, mostly in amphibolites from Austria and Czech Republic.