Elemental bismuth occurs as a metallic silver mineral often characterized by an oxide tarnish generating a dramatic iridescence of pinks, yellows and greens.

Bismuth is a trigonal native element, it belongs to the arsenic group of semi-metals. Its crystals are growing as rhombohedra or flat hexagons in parallel groupings. One distinctive physical manifestation of bismuth crystals is their signature habit of growing in a spiral, stair-stepped pattern around a central axis. This is uniquely due to a higher growth rate on the outside of crystal edges. 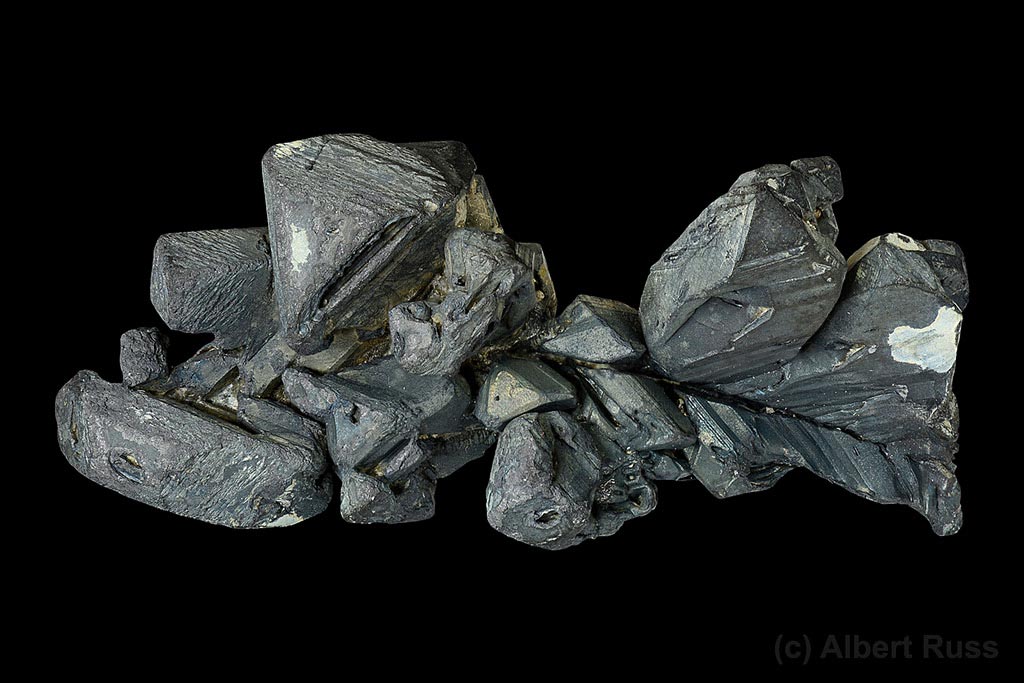 A characteristic of laboratory-grown bismuth is the formation of pseudocubic hopper crystals, crystals that grow in such a way that the crystal set forms a latticework in which the interiors appear to be ‘not filled in.’ Such lab-grown specimens are often coated to prevent tarnish, and an exemplar with no tarnish and a fine luster is certain to be a laboratory product.

Bismuth is a brittle, metallic silver metal, with typical pinkish hue when fresh. It tarnishes first to an iridescent oxide containing a range of colors from yellow to blue, and then in the end it forms the dark grey tarnish. The rainbow of iridescence is attributable to thickness variations in the oxide tarnish and the associated interference patterns from reflected light. When broken, the fractured faces display uneven beautiful internal crystals. Its hardness is 2.25 and density is 9.78. Bismuth melts at only 271.5 °C, which makes it easy to melt at home and grow synthetic crystals yourself. 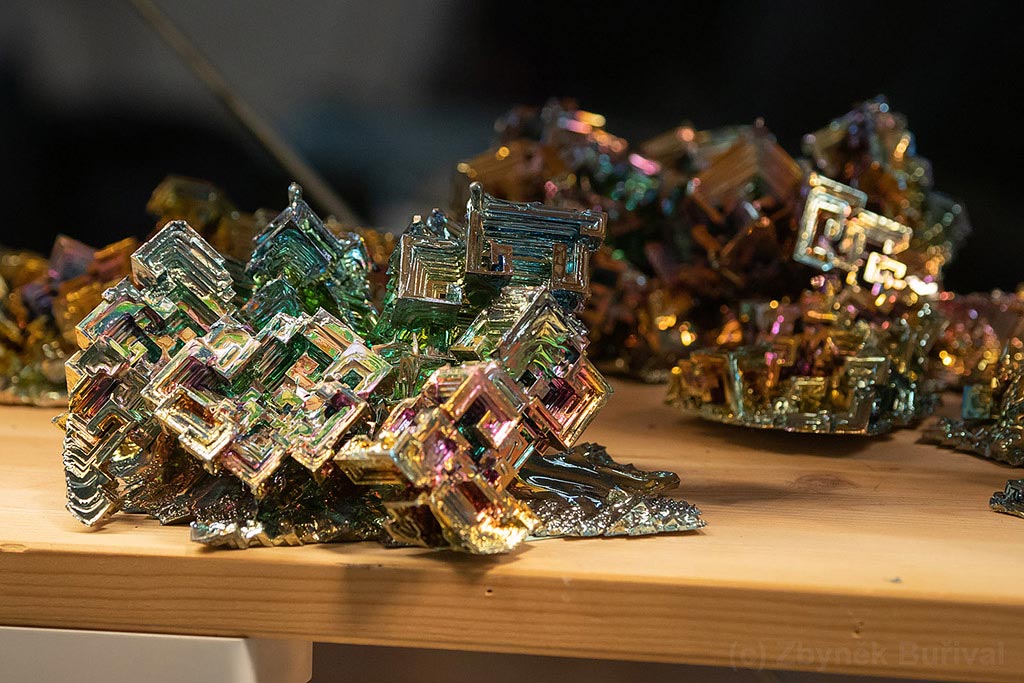 As a metal, bismuth has a few unusual properties. At atomic number 83, it occupies a non-toxic place between widespread, biologically poisonous lead at 82, and exceptionally rare, lethally poisonous polonium at 84. It is the most diamagnetic metal (repels a magnetic field), expands upon freezing, has a lowest thermal conductivity of all metals except mercury, and low toxicity. Because it expands upon cooling, it is useful as an alloy to counteract the shrinkage of other cooling metals. In thin layers, it is a semiconductor suitable for electronics. 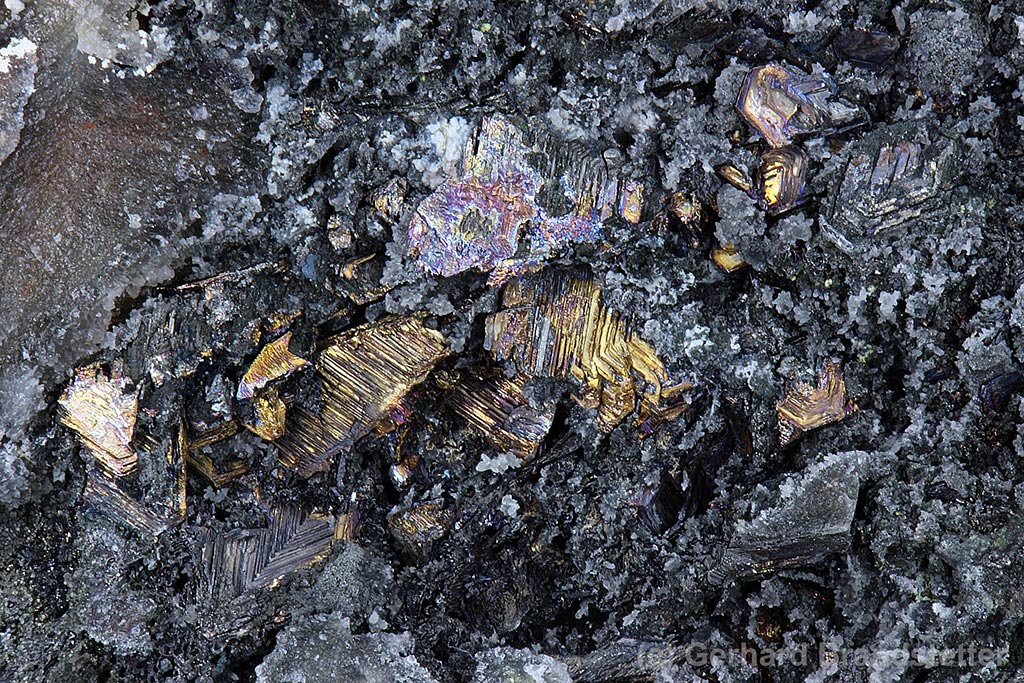 It is also the most stable radioactive element on Earth, as the half-life of its single isotope, 209 Bi, exceeds the estimated 14-20 b.y. age of the Universe by many orders of magnitude (1.9 x 1019 years). The bismuth radioactivity is so low that it was considered stable non-radioactive element until 2003.

The principal ore mineral is bismuthinite (Bi2S3), which typically occurs in granitic vein complexes along with high-temperature gold veins and associated with arsenopyrite, cassiterite, chalcopyrite, cubanite, molybdenite, pyrite, pyrrhotite, quartz, scheelite, topaz and wolframite. It was first reported from Potosi, Bolivia in 1832.

Bright yellow colored bismite (Bi2O3) is found as a secondary oxidation product near primary bismuth ores – bismuthinite and native bismuth. It was first reported from Goldfield, Nevada in 1868.

Bismuth has a long history of misidentification from ancient times until the latter part of the Middle Ages. The name is possibly sourced to the Arabic bi-ismid, a term meaning having the properties of antimony. Agricola, writing in 1546, Latinized the name as bisemutum, possibly a corruption of an old German term, weisse Masse (“white mass”), and clearly thought it was a distinct metal in the family of metals that included lead, tin and antimony. Alchemists thought of bismuth as a precursor of silver still in the process of formation (tectum argenti). German miners operating in the 16th and 17th centuries applied a variety of German names (Bismuth, Wismut, Wissmuth) to what was considered to be an ore of lead or tin. 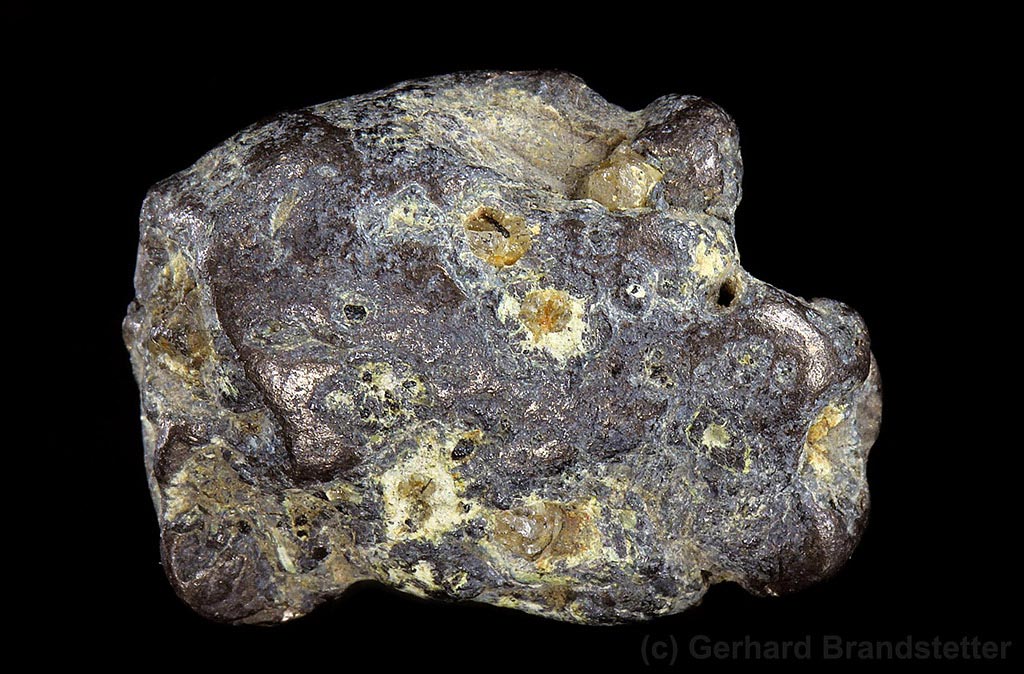 Johann Pott, Carl Scheele and Torbern Bergman, Swedish chemists, collectively established the distinction between lead and bismuth in 1738, and Claude Geoffroy, a French chemist, successfully distinguished bismuth from both lead and tin, and published his findings in 1753.

Bismuth is natively present in the Earth’s crust at twice the concentration of gold. It is generally found within hydrothermal formations with Co-Ni-Ag-As-Bi, in Sn-W greisens with quartz, or in high-temperature gold bearing quartz veins, sometimes with arsenic and antimony. 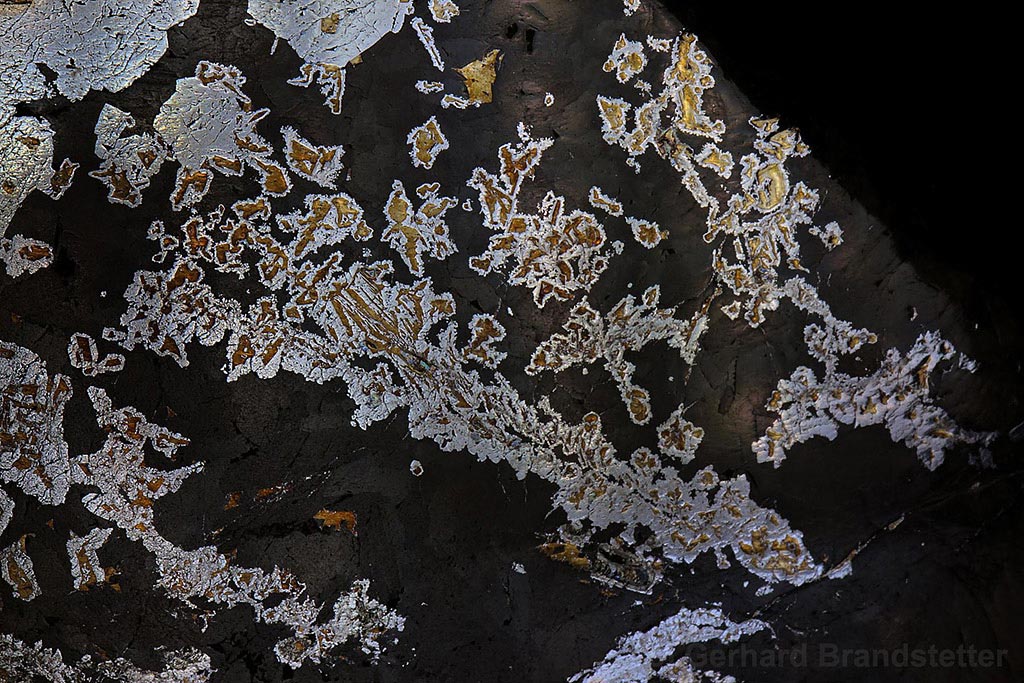 The commercial abundance of bismuth has generally tracked the fortunes of lead, as bismuth is a characteristic byproduct of lead mining. It can also be recovered from greisen ores mined for other metals like Sn and W.

Prior to World War II, the principal use of bismuth was as an anti-diarrheal product (typically bismuth subsalicylate, sold as the pink Pepto-Bismol or Kaopectate liquid in the US). Pharmaceutical houses have subsequently succeeded in developing bismuth compounds to treat peptic ulcers, eye infections and deodorants. 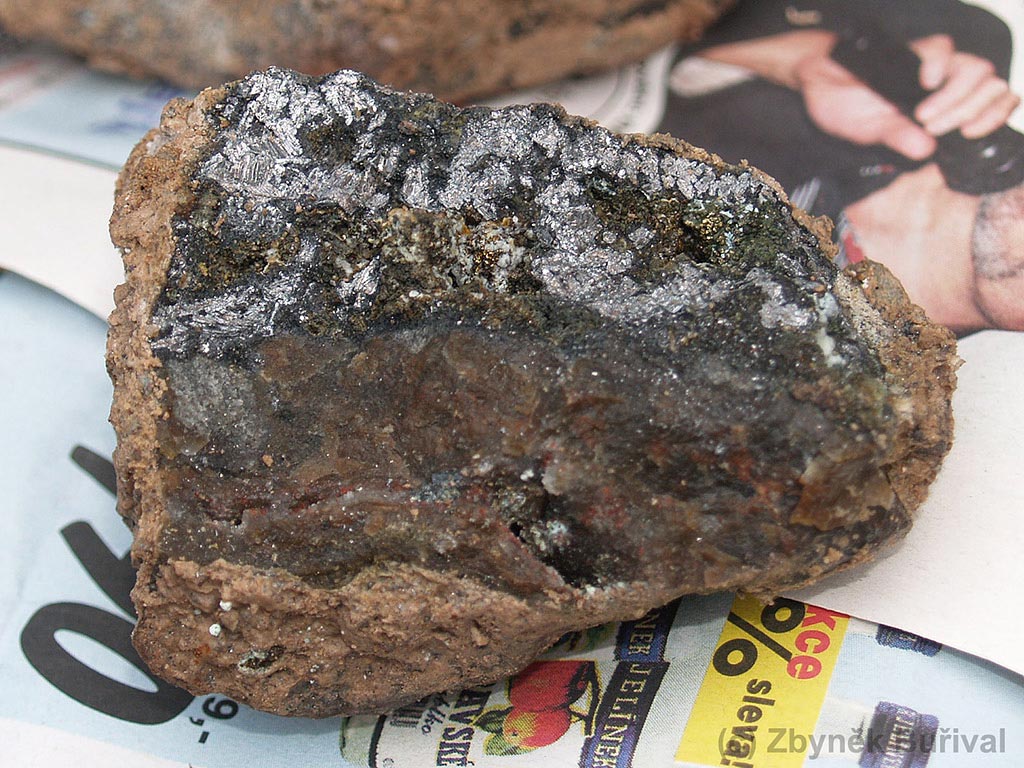 In recent decades, bismuth applications have expanded to include its use as a non-toxic substitute for lead in ceramic glazes, paste greases and food-processing equipment. Lead-free mandates are having a profound effect on the sectors of the plumbing industry that install and service potable water systems because residential and commercial construction in the US is under pressure to replace lead in all drinking water applications. 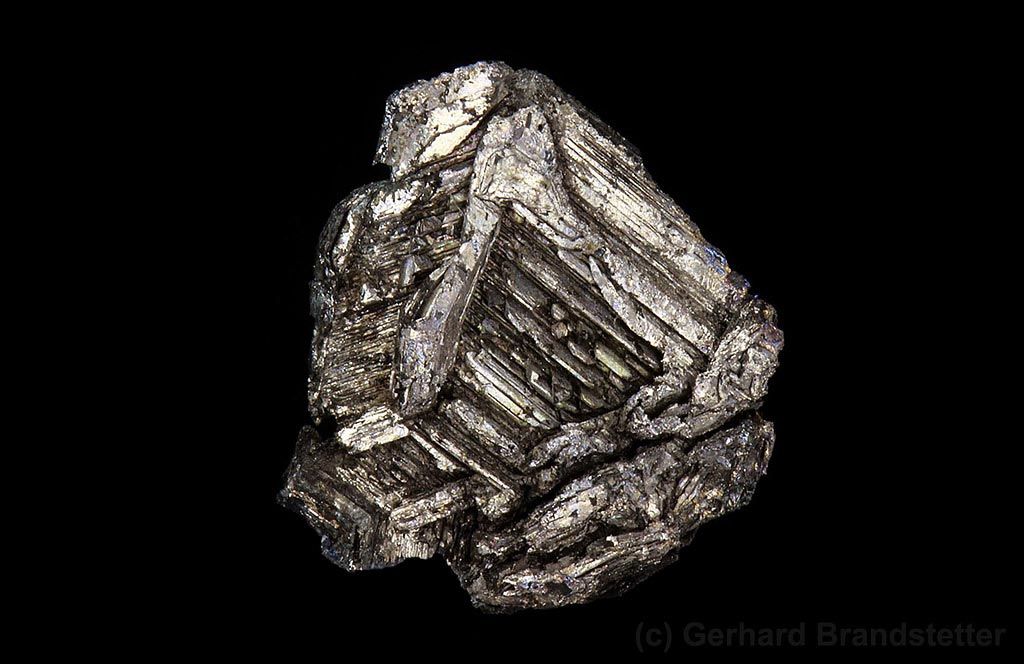 Similarly, the recreational hunting and fishing industries are also pressured to abandon the use of lead shot and sinkers. In the case of hunting, the concept that animals higher up in the food chain inevitably consume lead shot fragments embedded in the animal is not new. What has been recently established, to the great surprise of field biologists, is that a lead bullet striking a game animal not only mushrooms and breaks into large pieces upon impact, but fragments over a wide radius into hundreds of microscopic particles that become part of the grinding apparatus in the crops and gizzards of carrion-feeding birds. The result is more widespread systemic poisoning of wildlife than was first appreciated. The dispersion effect is not an issue in the fishing environment, but ingestion of lead is still a real issue.

Although modern practices attempt to recover, recycle and sequester lead as much as possible, the same efforts cannot apply to bismuth, as its industrial presence is orders of magnitude smaller, and such recovery efforts are economically impractical.

The world best bismuth specimens are told to be from its type locality at Schneeberg in Saxony, Germany. However, recent finds of great bismuth crystals from Cínovec, Czech Republic, are also of exceptional quality and size. 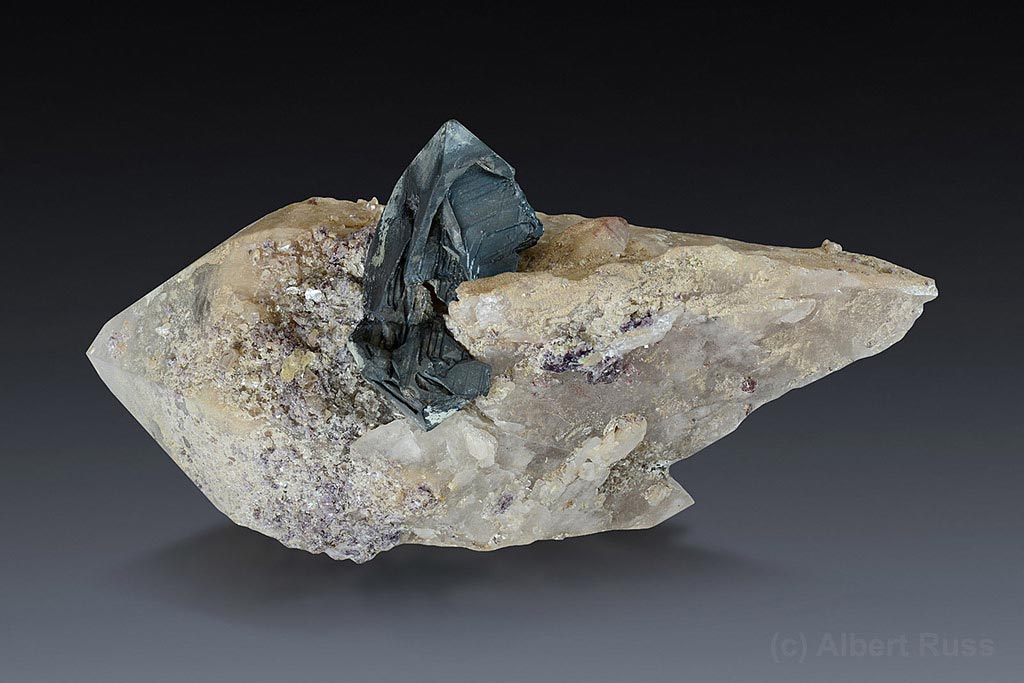