Mercury (Hg) is a heavy silvery-white metal and native element, which occurs as a liquid at standard temperatures and pressures (STP). This violates the standard IMA definition of a mineral, which requires mineral to be solid crystalline material at STP.

Native mercury crystallizes when cooled to -38.9 oC as rhombohedra in the trigonal system. 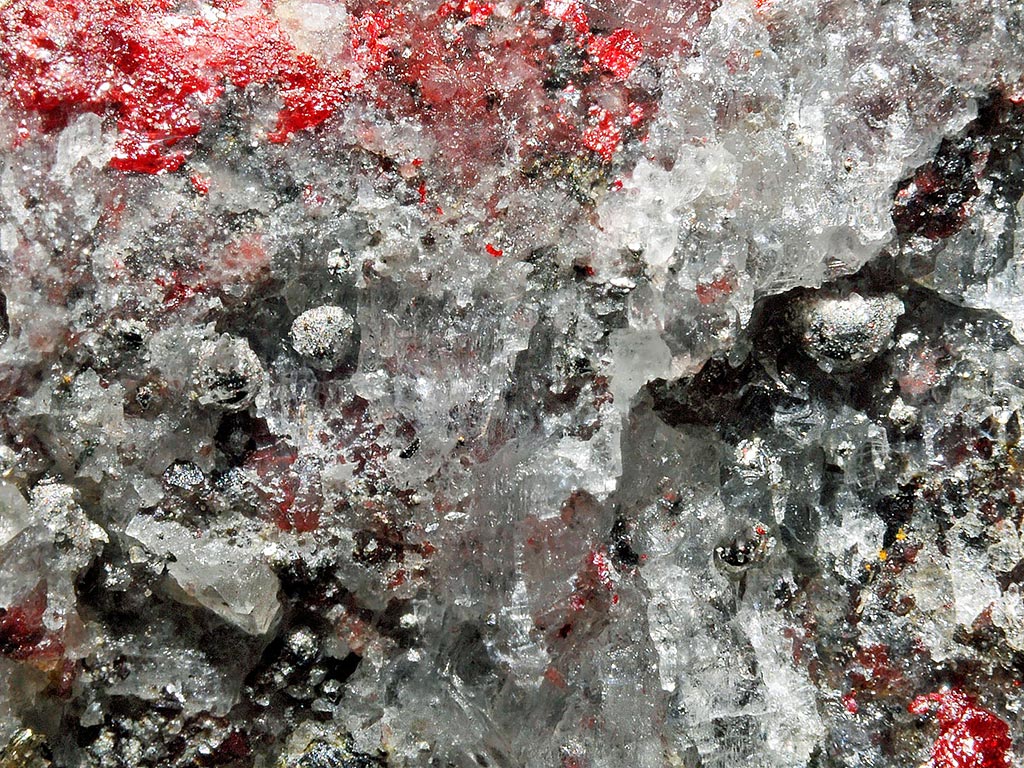 It is unaffected by dilute acids, but strong acids are capable of putting associated sulfates, nitrates and chlorides in solution. It also reacts with atmospheric hydrogen sulfide or sulfur powder into HgS (cinnabar). Mercury readily forms alloys with other metals – especially with silver and gold, these are called amalgams. Some of the amalgam alloys occur also in nature, they have various stoichometry and typically contain mercury together with silver, gold and copper.

As a liquid at STP, mercury is not normally characterized by conventional physical properties such as cleavage, fracture, streak or hardness. Its luster could legitimately be described as metallic and opaque. It does possess a liquid density of 13.596. 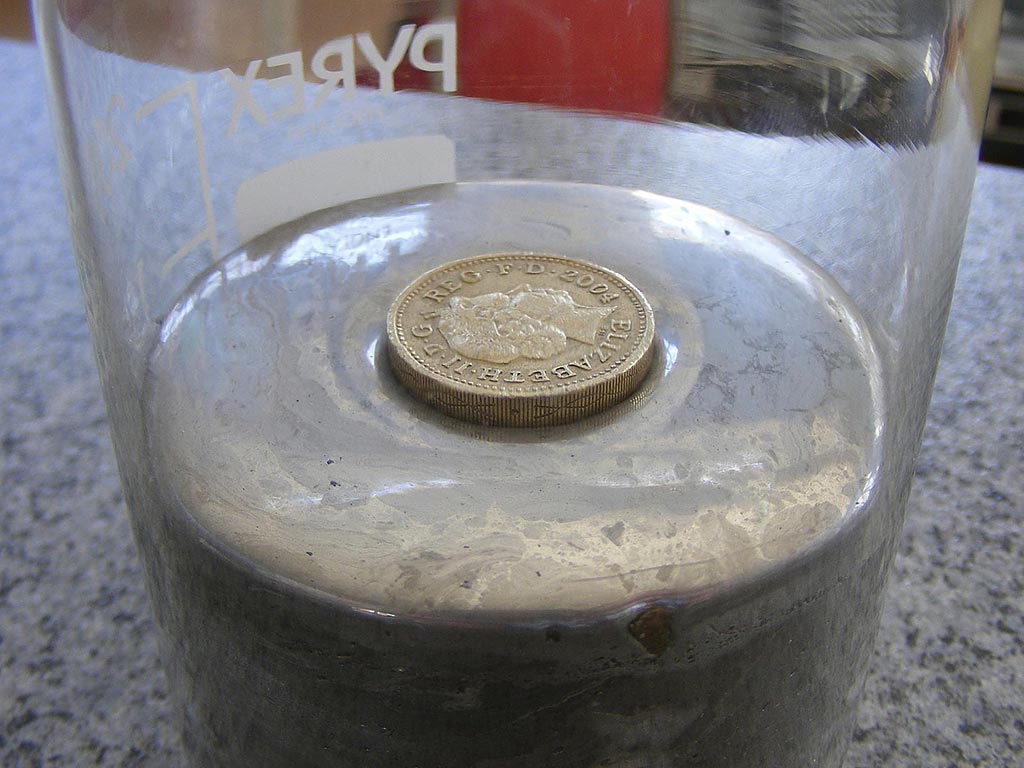 Elemental mercury has a very high density. This fact becomes obvious when you see heavy coins floating on the liquid mercury. Photo: Alby

When frozen below -39 oC, its volume decreases by 3.6% and density increases to 14.18. In addition, frozen specimens are malleable and sectile. Mercury is a poor conductor of heat, and a fair to good conductor of electricity. It volatilizes upon heating, creating toxic mercury fumes (see Hazards chapter below).

Elemental mercury is invariably associated with cinnabar (HgS) and could typically be found in association with orpiment and realgar as part of a volatile volcanic suite.

Mercury was known to Chinese, and Hindus before 2000 BCE, and found in Egyptian tombs circa 1500 BCE.

Mercury itself is rarely an ore of mercury, owing to its liquid state at STP and general scarcity. Elemental mercury usually occurs tightly connected with cinnabar (mercury sulfide HgS) deposits or less often volcanic activity. As the mercury is chemically very close to the precious metals, it forms very weak bonds with other elements (except alloys called amalgams). Thus, cinnabar is often easily decomposed, resulting in the formation of native mercury. 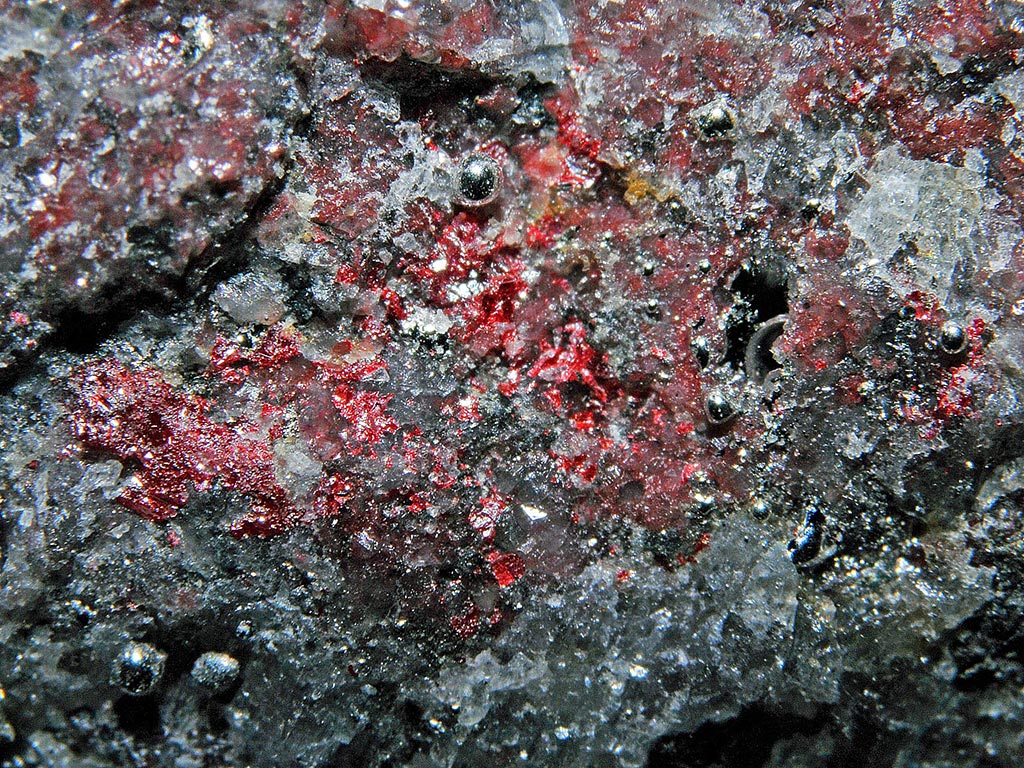 Mercury, occurring as elemental mercury and cinnabar (HgS), is a common constituent of volcanic gases, and makes its way into volatile releases into the atmosphere in hot springs and fumaroles, and as coatings or globules in fracture zones of near-surface volcanic rocks. The droplets are often attached to a cinnabar substrate and remain there unless disturbed. It can also migrate in liquid or vapor form and concentrate inside the vugs or fault zones.

Many big deposits originate from volcano-sedimentary marine formations, which are metamorphosed and original fine grained mercury rich material is redeposited by fluids into the hydrothermal vein systems. Veins often consist of quartz, dolomite, cinnabar, tetrahedrite and sometimes also some other sulfides, arsenides and amalgams. Elemental mercury forms by decomposition of cinnabar.

Dentistry has relied on mercury for over 150 years as a component of amalgam – a mix of mercury and metal alloys (gold, silver, tin, copper, manganese and zinc) – used to create fillings. Although the safety of amalgam has been questioned from time to time, the medical consensus is that there is no credible toxicity hazard. In fact, most of the mercury in human bodies comes from amalgam fillings but its concentration is several orders bellow the toxicity limits. Polymer resins have been introduced into dentistry to increase the versatility of dental repair work and replace potentially risky processing of amalgam fillings. 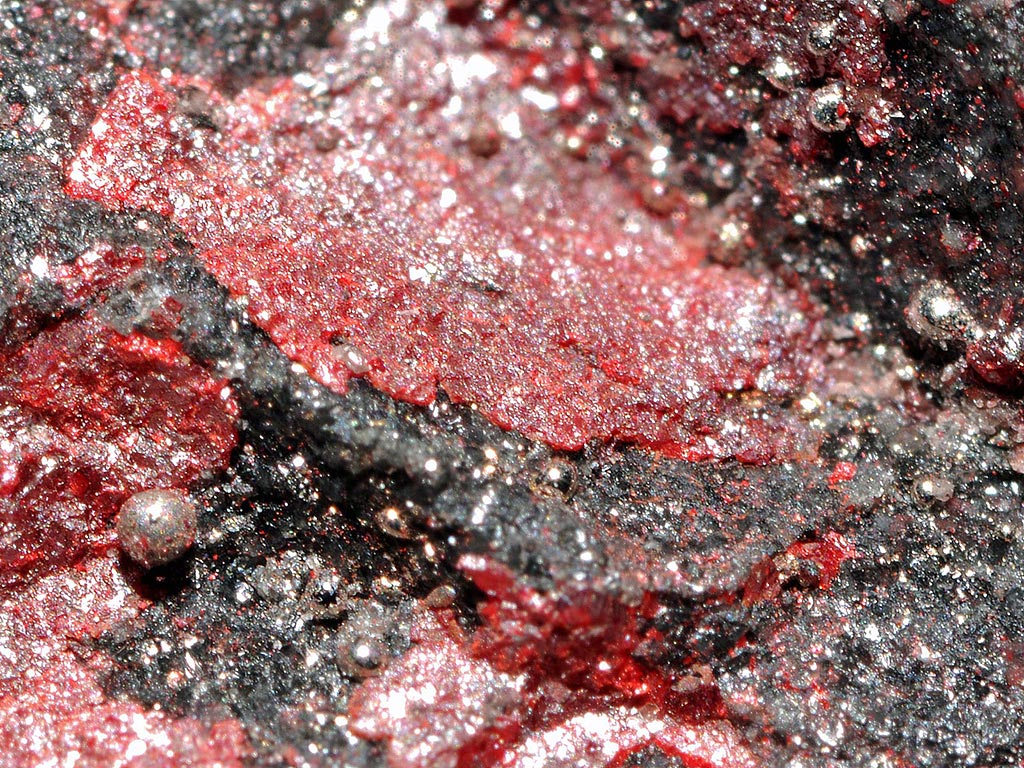 Sodium amalgams are employed to create synthetic organic compounds. Amalgam of mercury with sodium is also used in the manufacture of high-pressure sodium lamps. Fluorescent lighting is a common, well-established technology which relies on passing a current through a mercury vapor to produce short-wave UV light, which stimulates a phosphor (a luminescent material coating the interior of a glass tube) capable of creating visible light.

Many measuring instruments took advantage of the liquid malleability of mercury to measure changes in ambient temperature, atmospheric pressure and blood pressure, and also found applications in switches and relays to induce a change in state.

The risk of toxicity in medical applications led to the widespread phase-out of mercury in thermometers and blood pressure instruments, and their replacement by alcohol-filled glass gauges or electronic- or infrared-based gauges. Similarly, other mercury-based applications in switches and relays have given way to purely mechanical or electronic ones.

The severity of routine and occupational exposure to mercury has been recognized for decades. Central nervous system (CNS) damage is the comprehensive result of toxic exposure. Symptoms of mercury poisoning are insidious, because they appear gradually and depend very much on the specific form of mercury, the dose, duration and method of exposure.

Classic intoxication symptoms include general neurological impairment (balance and coordination) and sensory deficits (speech, hearing and vision). Major organs (brain, kidney and lungs) are most affected, and the ultimate outcomes of poisoning include irritability, excitability, tremors, muscular spasms, memory loss, depression, delirium and suicide. Treatment of mercurial poisoning by chelation therapy (using a designer chemical compound, DMPS or DMSA, to bind and excrete the mercury) is the most widely used technique, but its success is limited and must be employed under strict medical supervision to avoid extreme side effects. 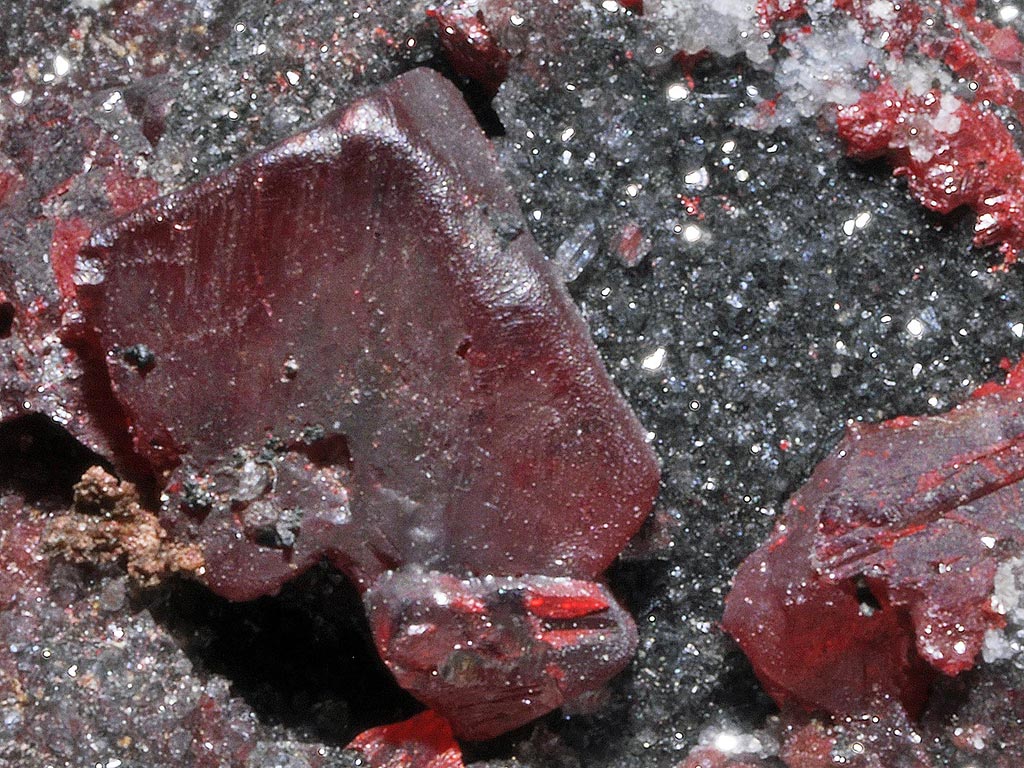 One of the most tragic and least-reported aspects of mercury poisoning is the fact that amateur artisanal miners will use mercury amalgamation to extract gold from rock by heating the rock in unsafe conditions, for example on a stovetop at home, infusing the home environment with mercury fumes. There are numerous accounts of children in mercury-rich areas having played with rolling balls of elemental mercury as childhood toys, and suffering CNS damage as a result.

Another misguided application of mercury was the use of calomel (a creamy-white pasty mineral, Hg2Cl2, found in mercury deposits) between the 16th and 19th centuries as a medicinal cream to combat malaria and yellow fever. It was also used as an emetic (worm chocolate or worm candy) to induce vomiting in patients infected with parasitic worms.

Mercury has a long history of environmental toxicity, owing to its natural presence in volcanic exhalations and the highly variable amount pumped into the atmosphere with each volcanic eruption. The estimated atmospheric load is estimated at approximately 10 ng/l, with half attributed to volcanic sources and half to human activity. Chief among the human sources, in decreasing order of importance, are emissions from coal-fired power plants, gas-fired plants where mercury was not stripped out, large gold mines, smelters, cement production, hazardous and municipal waste, iron and steel production, and battery manufacturing. 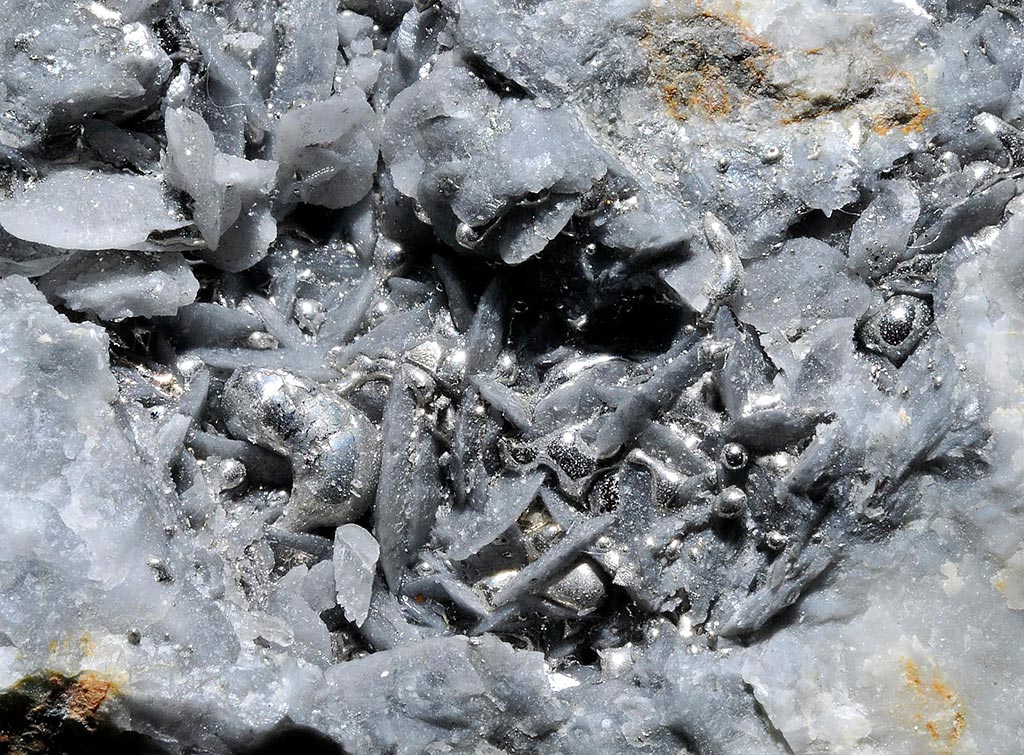 In the modern era, elevated atmospheric values have been recorded in urban areas, where waste disposal of mercury-containing products inevitably allows volatile mercury to enter the atmosphere. Significant industrial releases have been identified at several sites in the world. Mercury pollution in urban estuaries and nearby basins is an extreme problem because of the affinity of mercury for carbon enclosed in organic mud. It is a particularly severe problem in areas where fish and shellfish are the important base of local diets, as both tend to concentrate mercury in fatty tissue. At the base of the marine food chain, fish and shellfish dramatically increase the loading of mercury in the larger predatory fish: shark, swordfish, mackerel and several varieties of commercially-fished tuna.

The result of these recognized impacts has been the universal attempt to limit the industrial uses of mercury to the extent possible, and to impose a strict regulatory regime, established in 140 countries in 2013, to limit and monitor the release of mercury into the environment. In the US, mercury is regulated under acts regulating clean water, clean air, waste disposal, drinking water and battery disposal. In the European Union, additional focus was placed on the manufacture and use of mercury-containing instruments. Similar bans were put into effect in Scandinavia.

Mercury in the mineral collection

Native mercury is far from being abundant or popular mineral specimen. However, special care must be taken to properly handle and store native mercury specimens. Despite very small amount of mercury present in the normal specimens, it should be stored in the sealed plastic container and handled with special care. 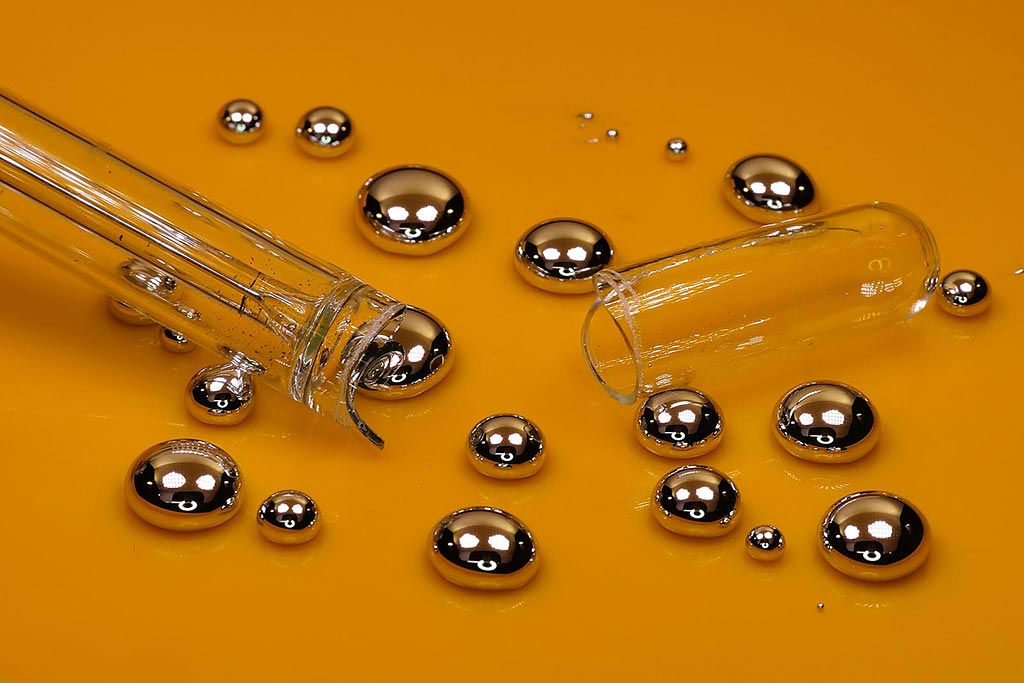 When you drop a mercury thermometer, small globules of mercury form immediately and run everywhere. You do not want this to happen with your mineral specimen! Photo: Tavo Romann

The native mercury drops are often easily lost from the matrix. When they hit the ground, they immediately splash into small mercury spheres – running everywhere and often producing hundreds or thousands of tiny and microscopic drops. Never transport native mercury specimens without a box and never work with them (e.g. photoshoot session, analytical work etc.) without a plastic plate/box preventing drop or loss of mercury. In case of emergency, sulfur powder can be used to remove microscopic drops of mercury. Never use vacuum cleaner, it will be contaminated forever!

Trimming and preparation of specimens containing liquid native mercury are extremely problematic and should be done in the professional laboratory!

Be sure to keep the mercury specimens (including cinnabar) locked and far from reach of any random person or kids.

The Almaden was mined since Roman times until 2000, with estimated production of about 250,000 metric tons of mercury. The deposit consists of two quartzite layers heavily mineralized with cinnabar, which likely originated from explosive breccia nearby.

The Idrija was officially mined since 1508 until 1995, producing 147,700 metric tons of mercury. The hydrothermal mineralized zone is about 100 m thick and follows the fault zone in Triassic limestones. 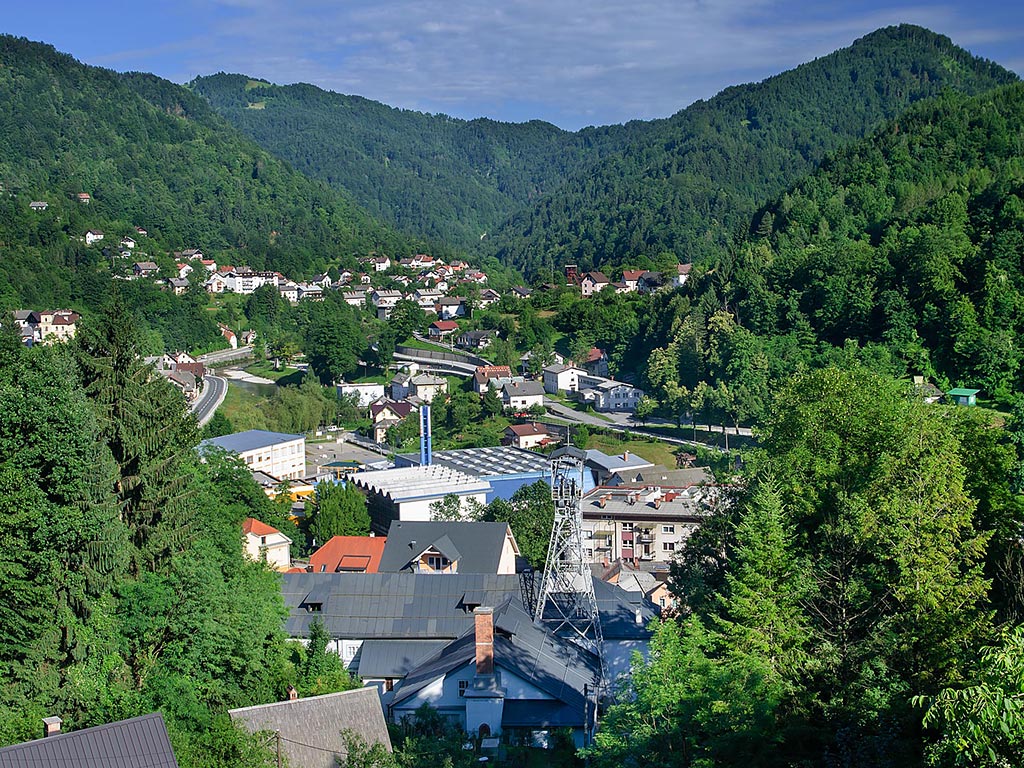 A few other classic sites in Europe include: Sala, Vastmanland in Sweden, Mount Avala near Belgrade, Serbia; Moschelandsberg, Rhineland-Palatinate in Germany; Levigliani Mine, Tuscany in Italy; and Porac and Rudnany in Slovakia.

The most famous mercury mine in the US is the New Almaden (operated intermittently 1820-1927), Santa Clara County. The New Almaden was a critical source of mercury for gold extraction by amalgamation during California gold rush. The mining area is now a part of the Almaden Quicksilver County Park.

The very important (and almost unknown) mine was in the Huancavelica in Peru, mined by the Spanish kingdom between 1570 and 1821. The mine was a very important source of mercury for amalgamation of Peruvian and Bolivian silver ores.

In modern times, the best cinnabar specimens originate from Tongren Mine in China. However, no native mercury from the same site is on the market.