Bramberg am Wildkogel is a small municipality in the Salzburgerland, Austria. The small town hosts one of the top quality collections of Alpine minerals. Definitely a must see for all serious collectors visiting Austrian Alps!

Location close to the famous Habachtal emerald mines and many classic Alpine mineral localities with centuries of crystal hunting history was an obvious reason to built a mineral exhibition. Some archeological finds suggest that the Alpine quartz from this area was mined in the ancient Rome era. Later, the Alpine clefts were a nice source of gems for crystal hunters (called Strahler in German).

The museum in Bramberg was founded in 1979 by the Prof. Hans Hönigschmid. The big part of the museum is located in the Wilhelmgut farm which belongs to the oldest in the area and dates back to the 14th century. Big part of the museum – both indoor and outdoor – is focused on history, local crafts, traditions and beekeeping. And significant part is of course dedicated to the Alpine minerals. 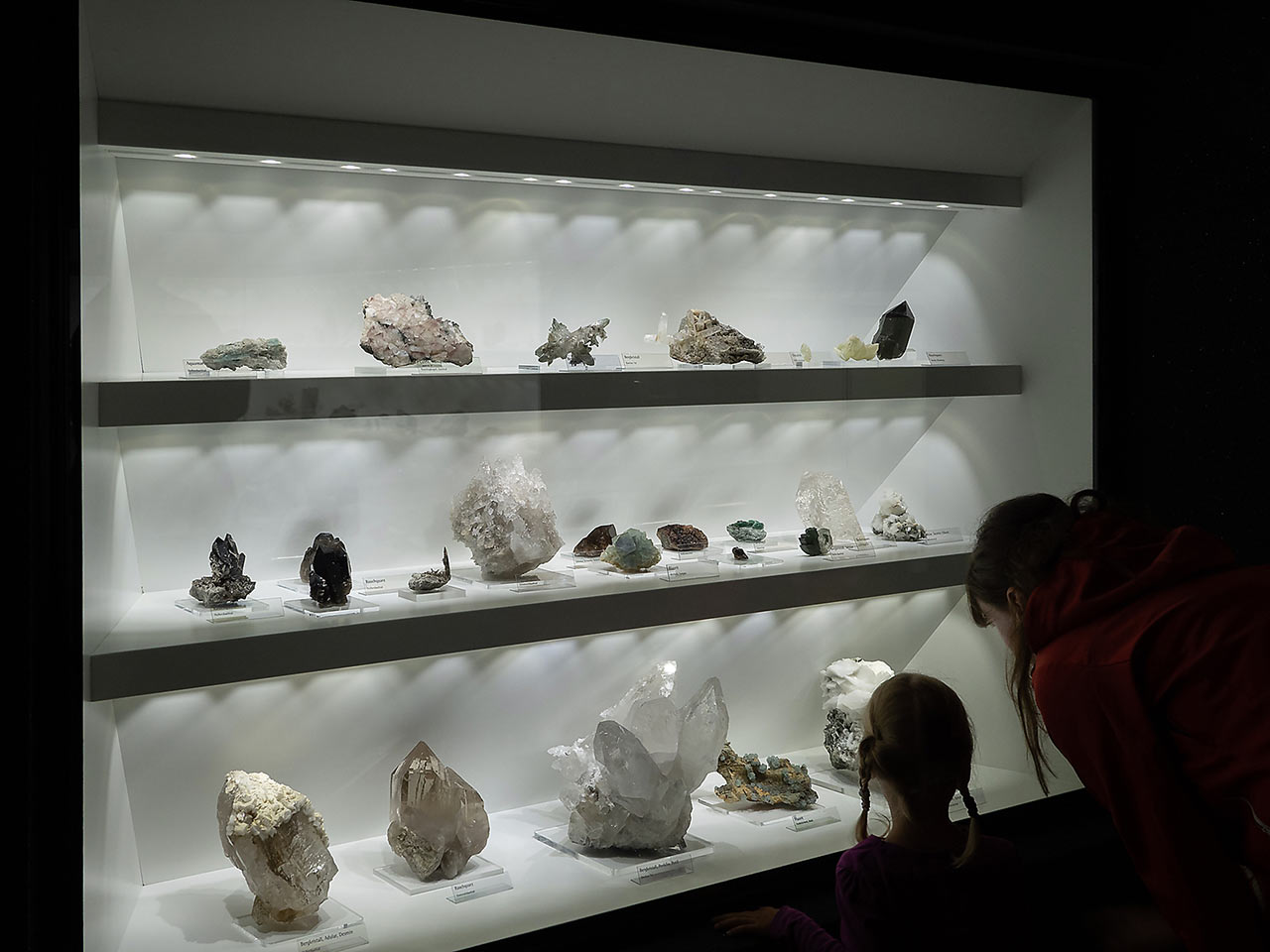 For the mineral collectors is definitely the most important the Alpine minerals exhibition – named „Emeralds and crystals“. Despite its small size, the museum hosts truly world class mineral exhibition. Even better, the original exhibition was redesigned in 2010. The entrance area was changed and there is a new underground mineral exhibition.

The displays are very nicely designed, well lit and specimens are well arranged. The dark exhibition room colors contrast nicely with white and pale gray colored interior of the displays. Specimens are well selected, properly spaced and generally well lit. There are also info panels with explanations, geological maps and also a small model of the Alpine cleft. The little problem is sometimes a mixture of halogen and LED lights. 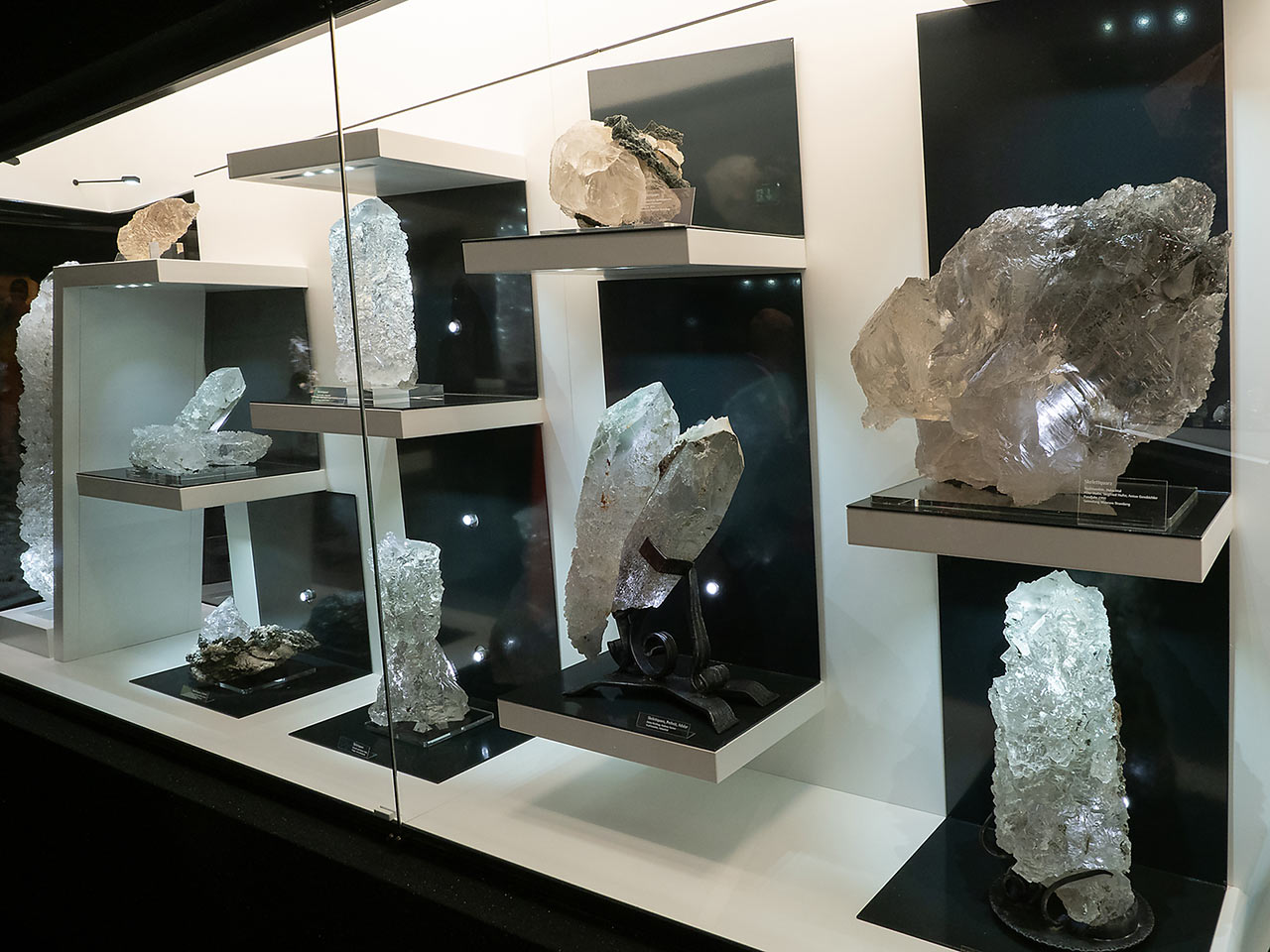 Display with the rare find of a huge etched quartz crystals from the Habachtal, Austria. 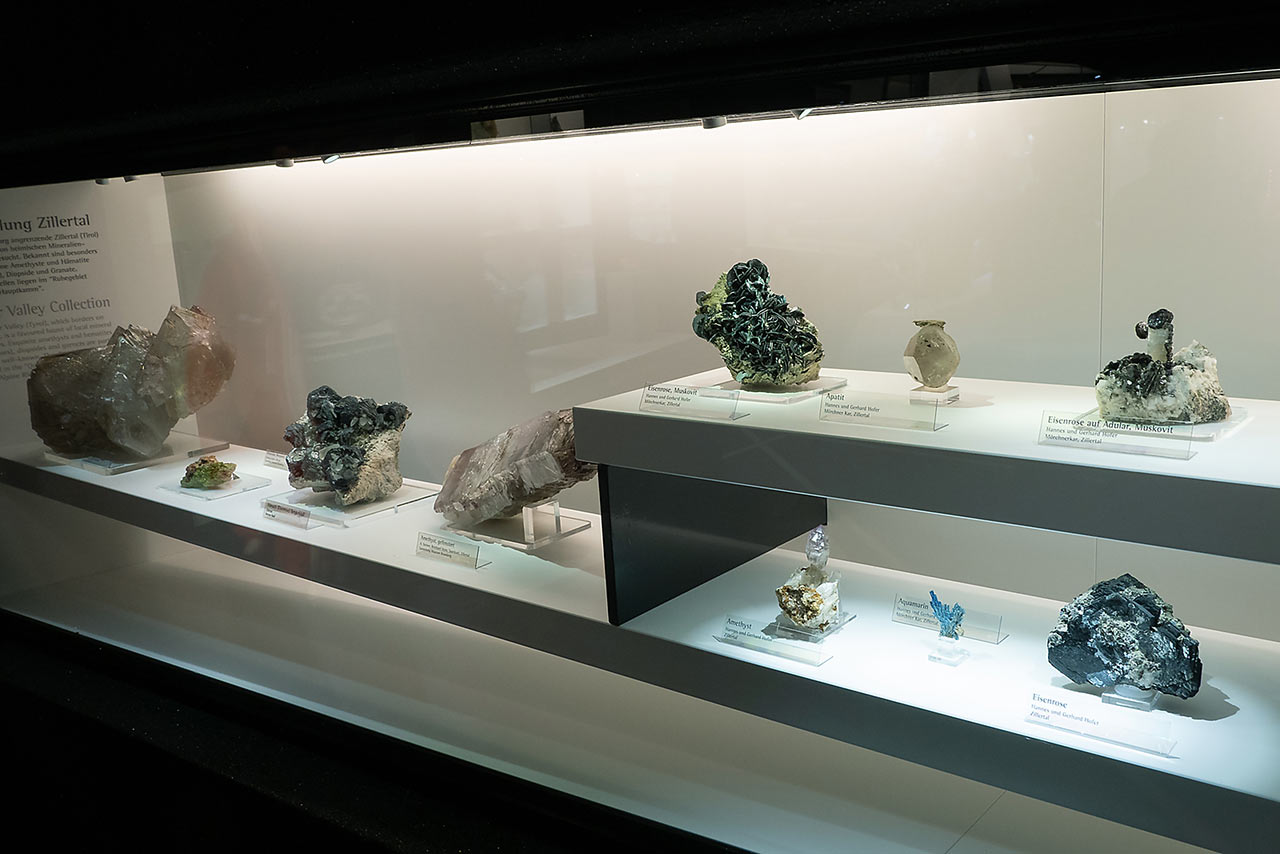 Opening times and prices can be found here. Current opening times might be limited due to the COVID.

The Austrian Alps are pretty depleted in fluorite, which is the true king of central Alps in Switzerland and France. The best Austrian Alpine fluorites were found in limestones, the biggest one were orange to pink octahedrons from the Schrammacher Wand, located west from the Zillertal. These fluorites are not represented in the museum. 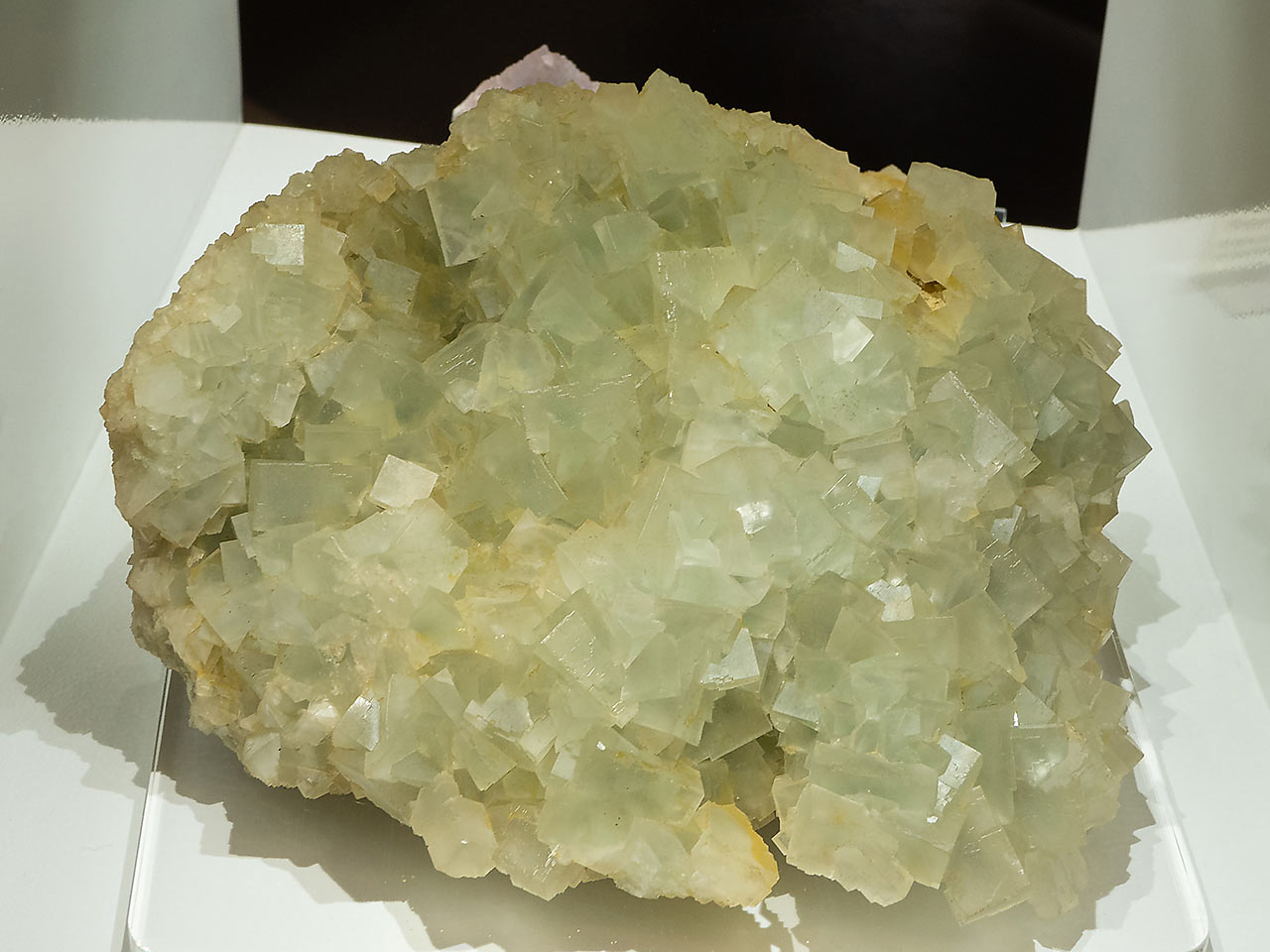 Minerals of the Hohe Tauern Mountains

The Hohe Tauern Mts. are the highest part of the Austrian Alps, mostly located inside the Hohe Tauern National Park. Generally, the Alps have the outer units, mostly consisting of mesosoic limestones and other sediments. The core units are made of granites and metamorphic rocks like amphibolites, gneisses, schists, and phyllites. The significant part of the Hohe Tauern Mts. geologically belong to the tectonic unit called Tauern window. If you want a scientific details, check this paper with geological map and explanation.

The good news is that the tectonic Tauern window exposes a rocks with abundant Alpine clefts. Because of the various rocks involved, the resulting mineral assemblages are also very interesting. Unlike granites of Switzerland or France, the Hohe Tauern Mts. are quite rich in minerals like adularia and pericline feldpars, titanite, rutile, anatase, brookite, apatite, epidote, actinolite (and its hairy variety byssolite) and calcite. Also some rare minerals - for the Alpine clefts - were found: scheelite, kainosite, milarite, datolite, phenakite, and bertrandite. Almost completely missing is the Alpine Rosa fluorite, which is typical for the granitic core Alpine units. 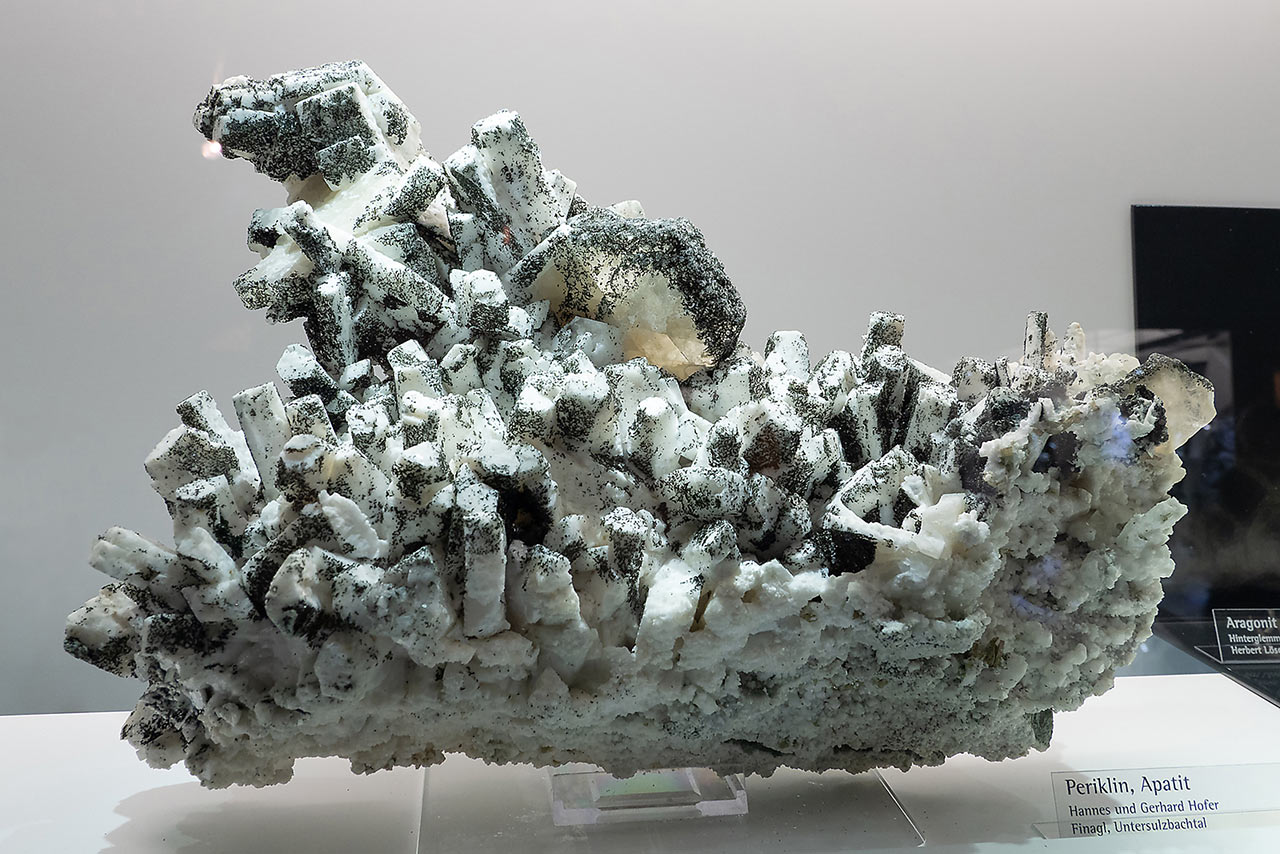 Huge cluster of pericline with apatite on the top, found in the Untersulzbachtal, Austria. 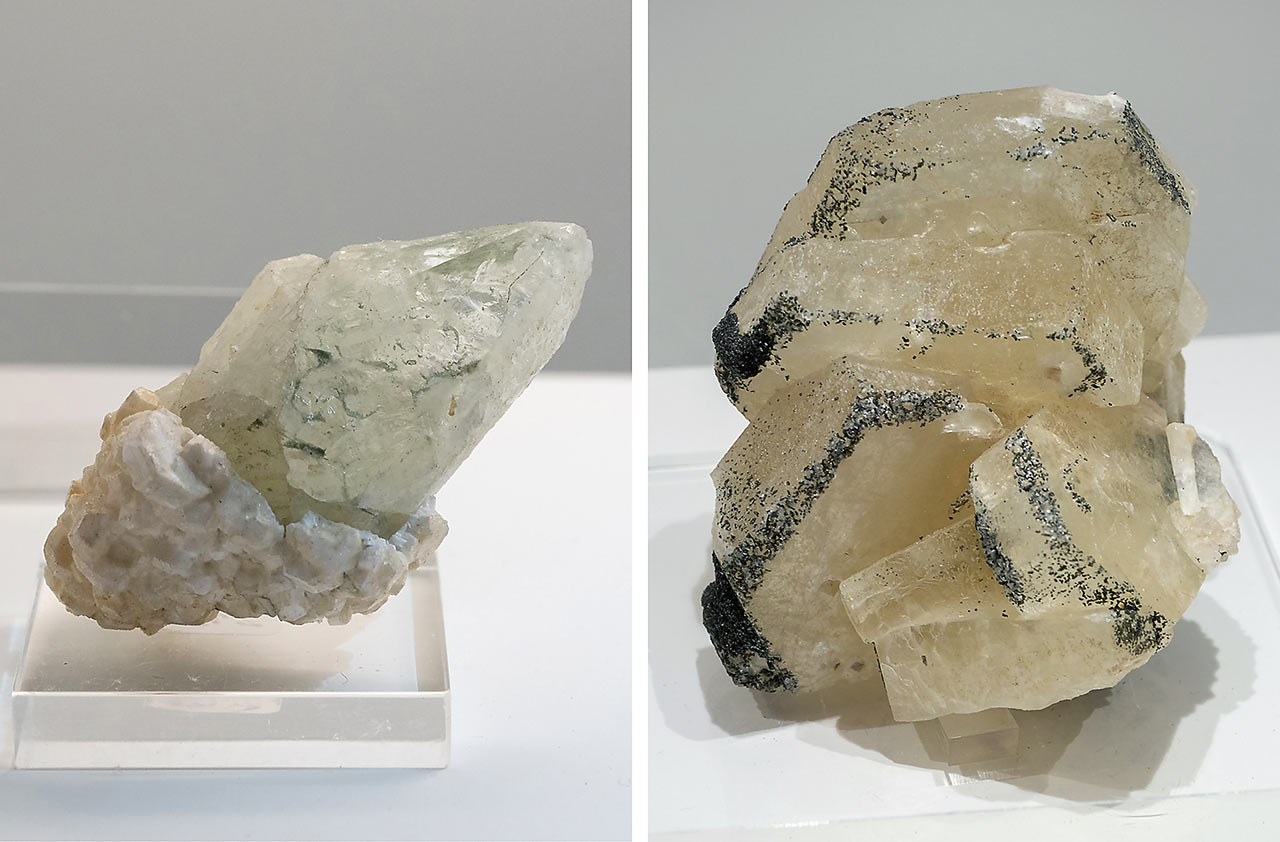 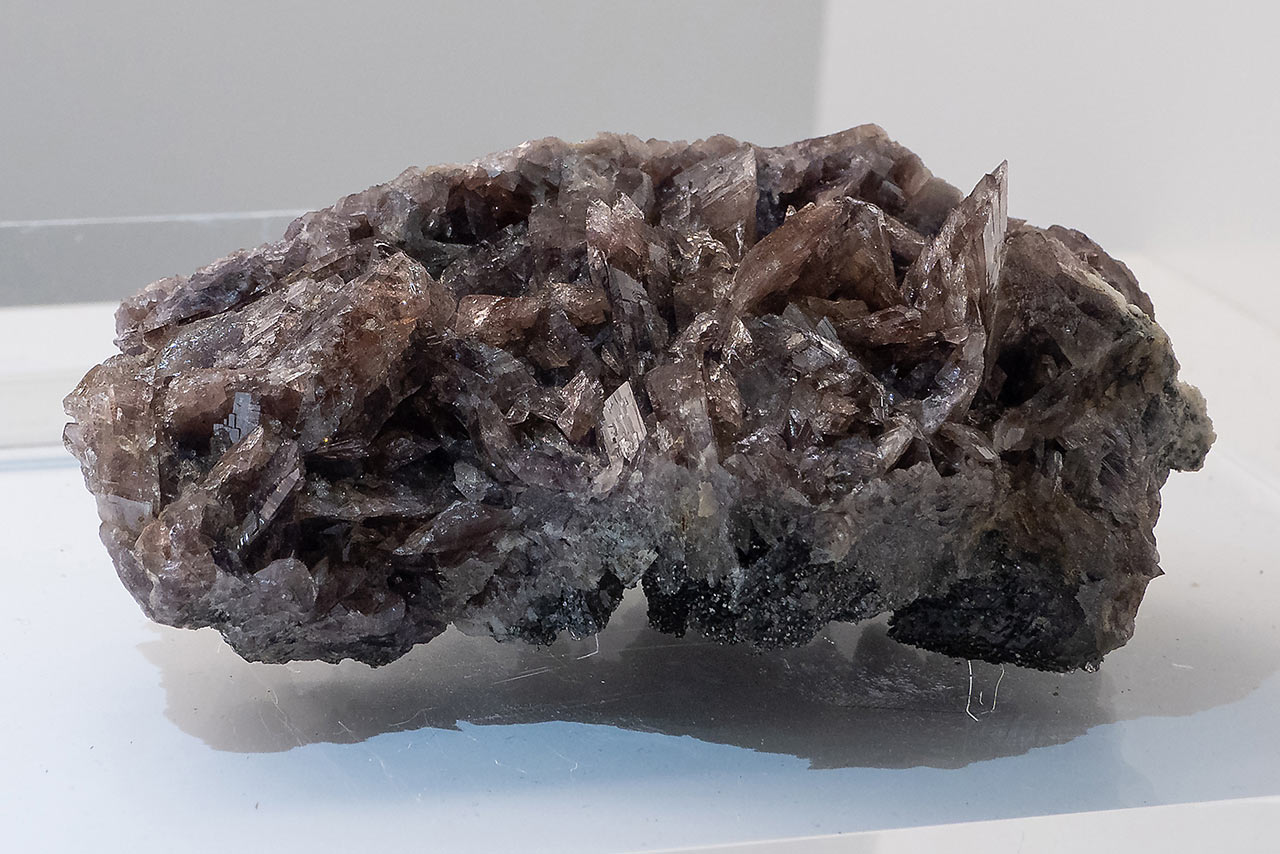 Cluster of the rare axinite from the Hocharn, Hohe Tauern, Austria. 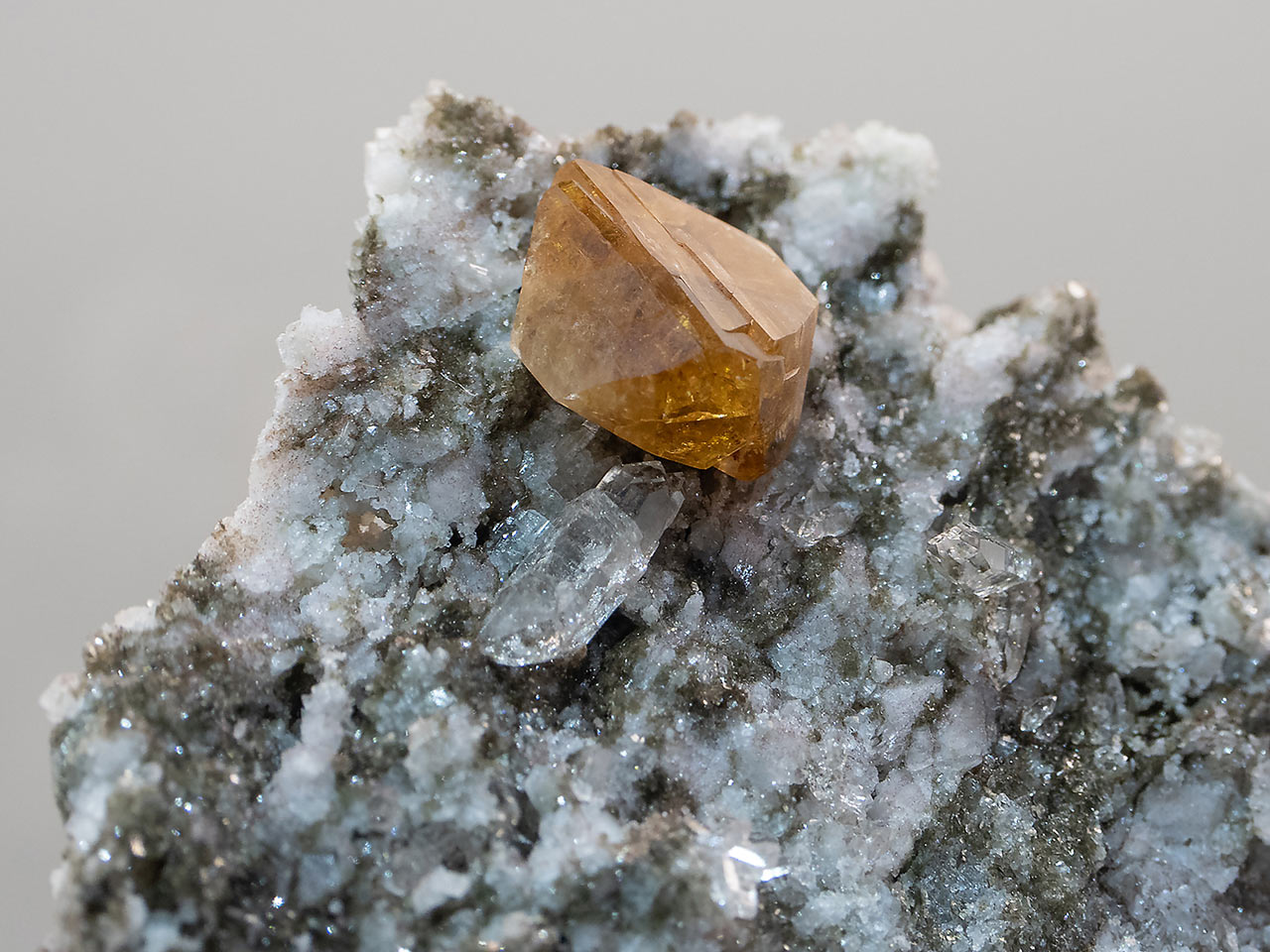 Nice crystal of very rare kainosite on the quartz from the Obersulzbachtal, Hohe Tauern, Austria. 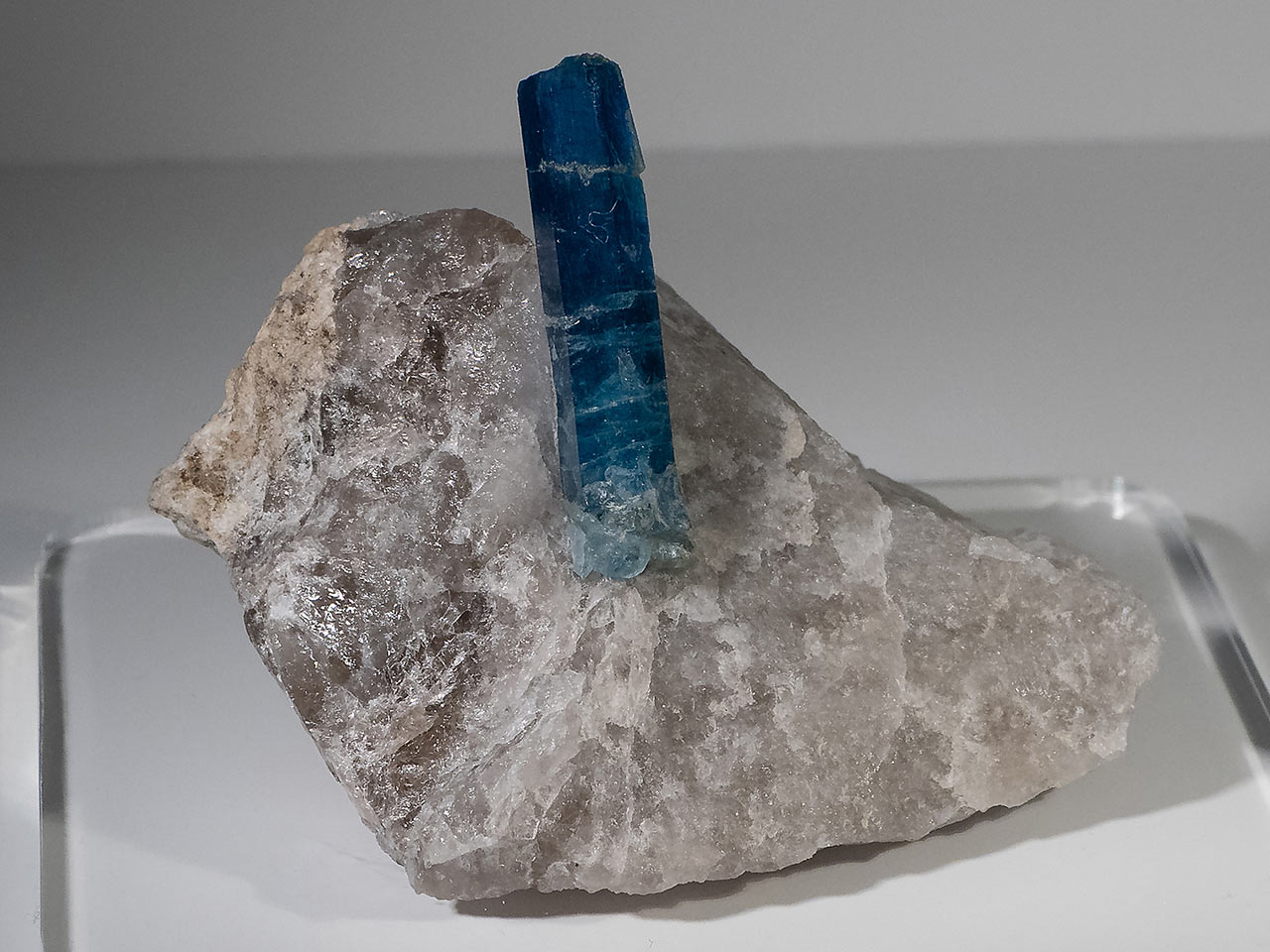 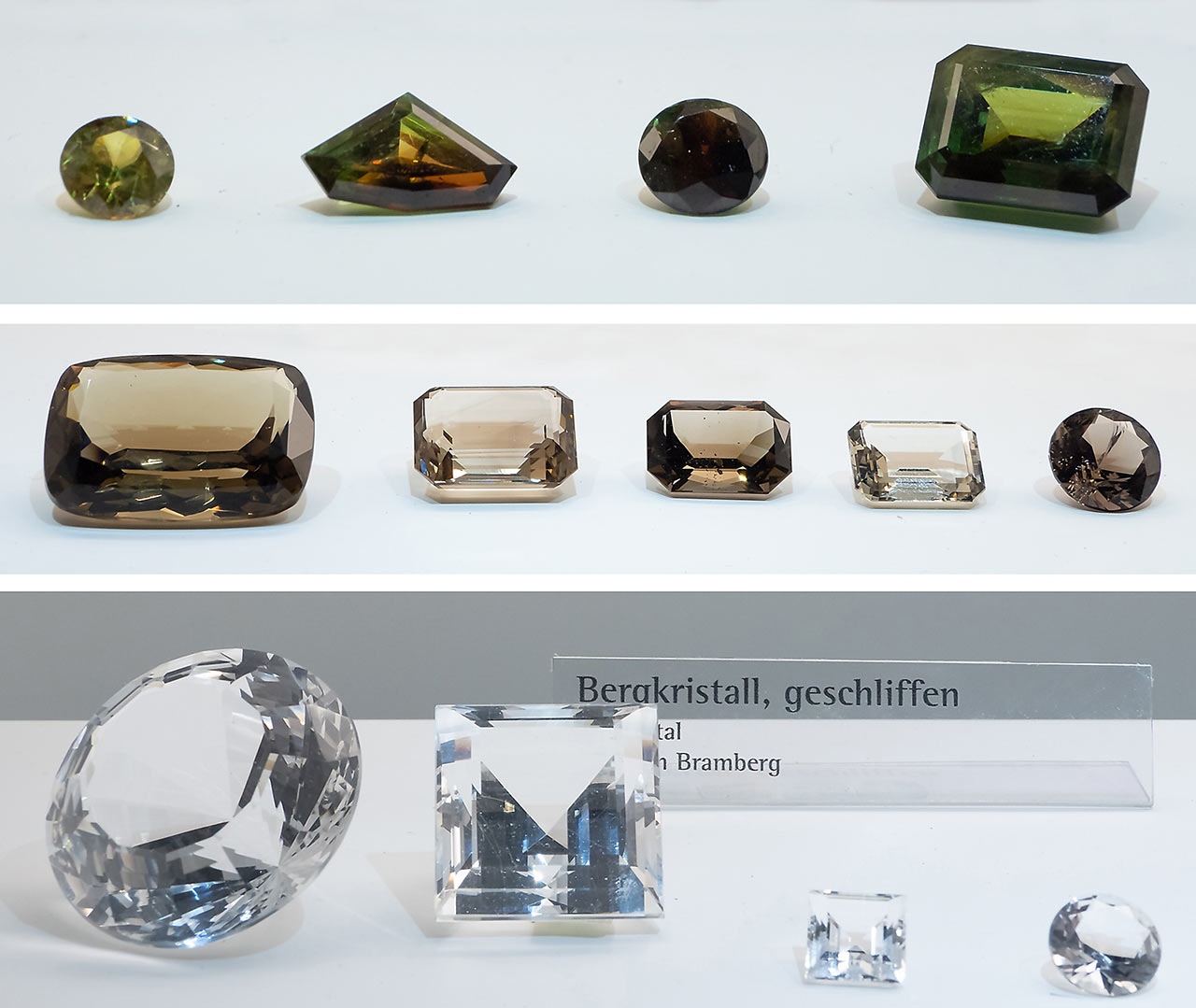 Various faceted gems made of the titanite (top), smoky quartz (middle) and clear quartz (bottom). All material comes from the Hohe Tauern Mts.

One of the most typical and famous minerals of the Hohe Tauern Mts. is the titanite. Or better say its Alpine variety called sphene. It forms wedge shaped crystals inside the Alpine clefts, sometimes reaching well over 5 cm in size. The typical color is honey, brown or in best cases vivid green - providing a very nice contrast on the typical white pericline matrix. 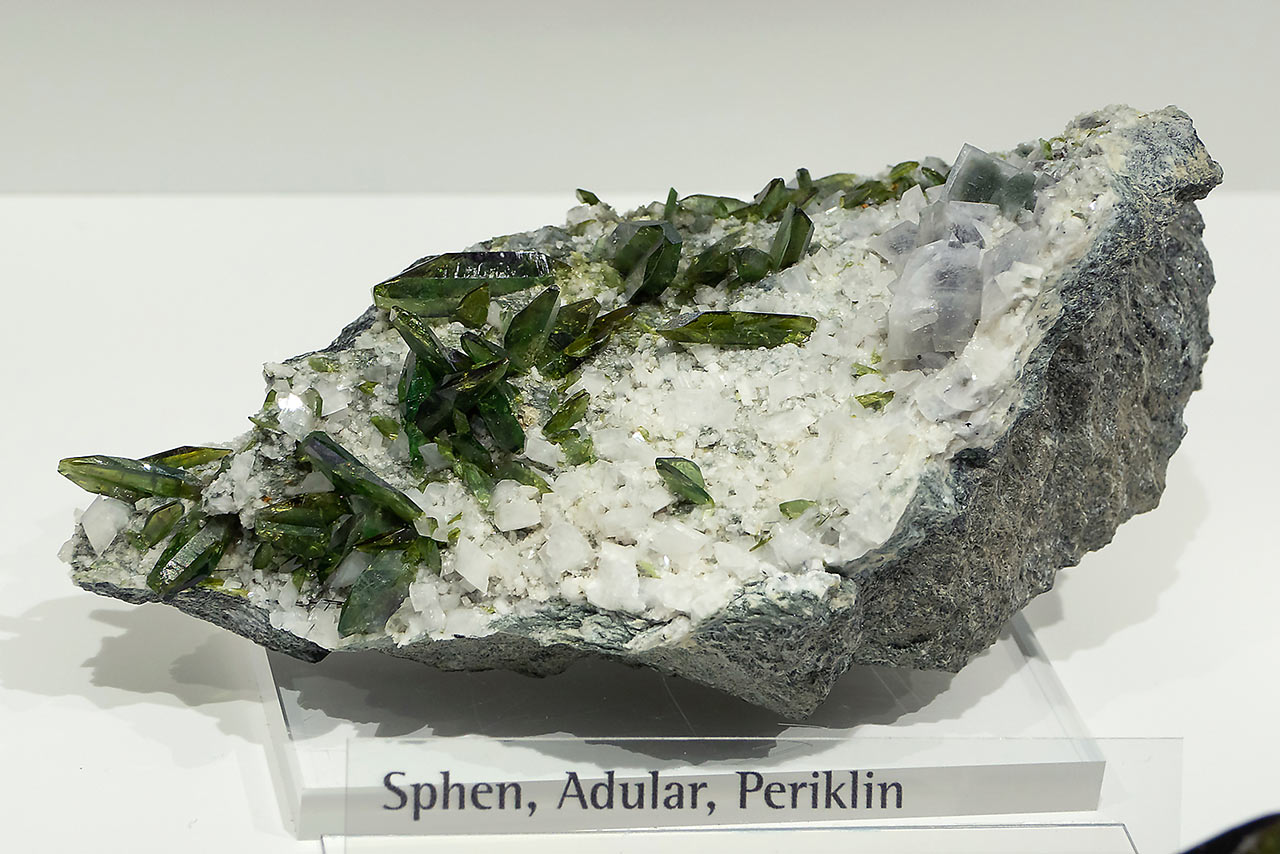 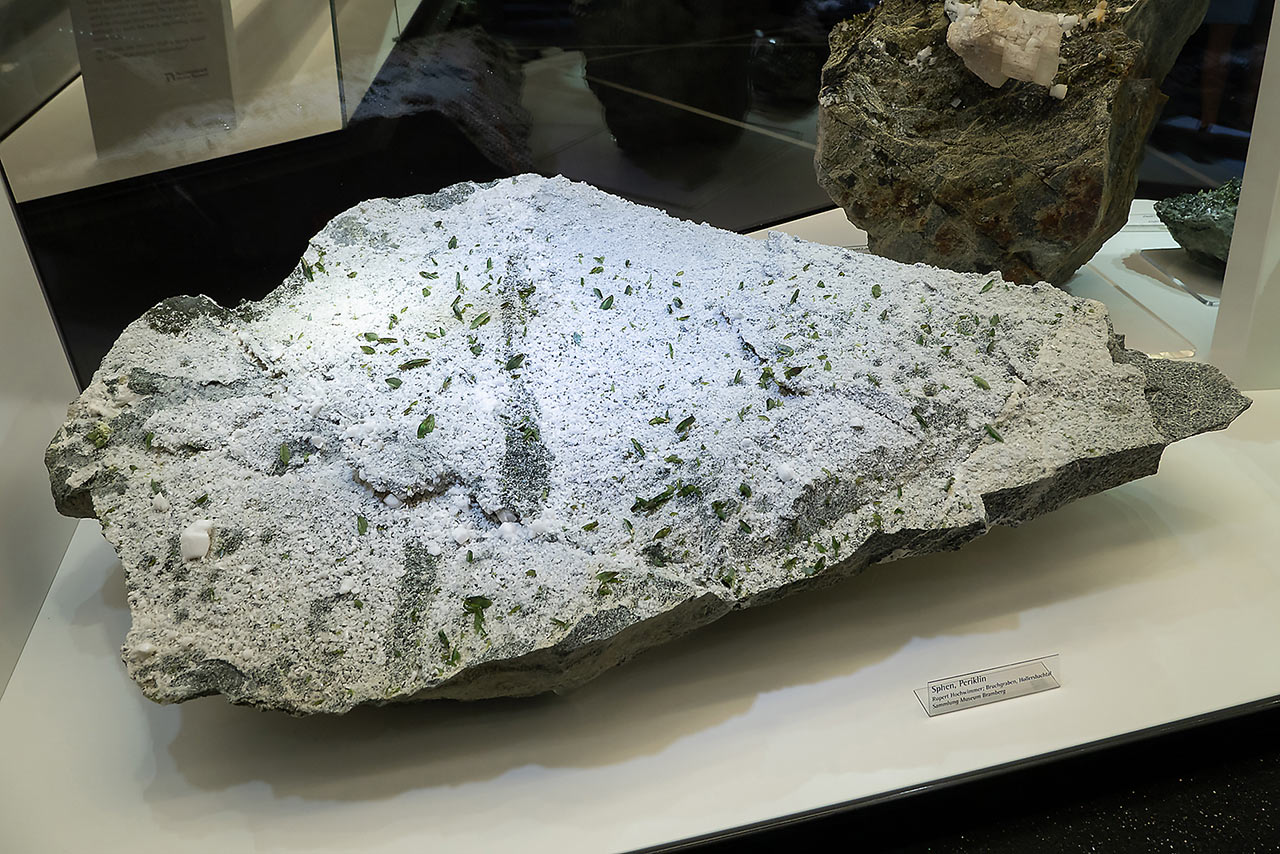 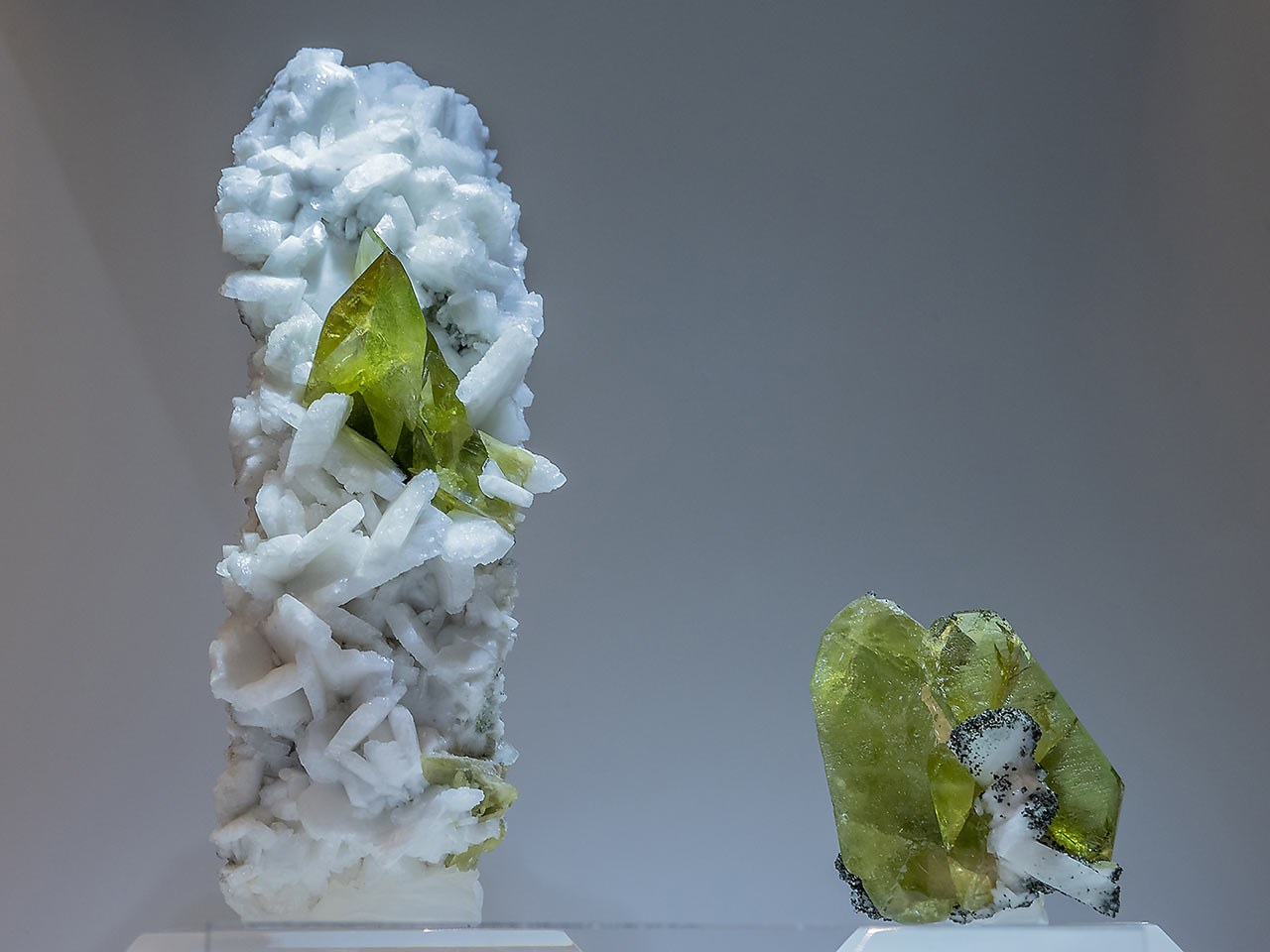 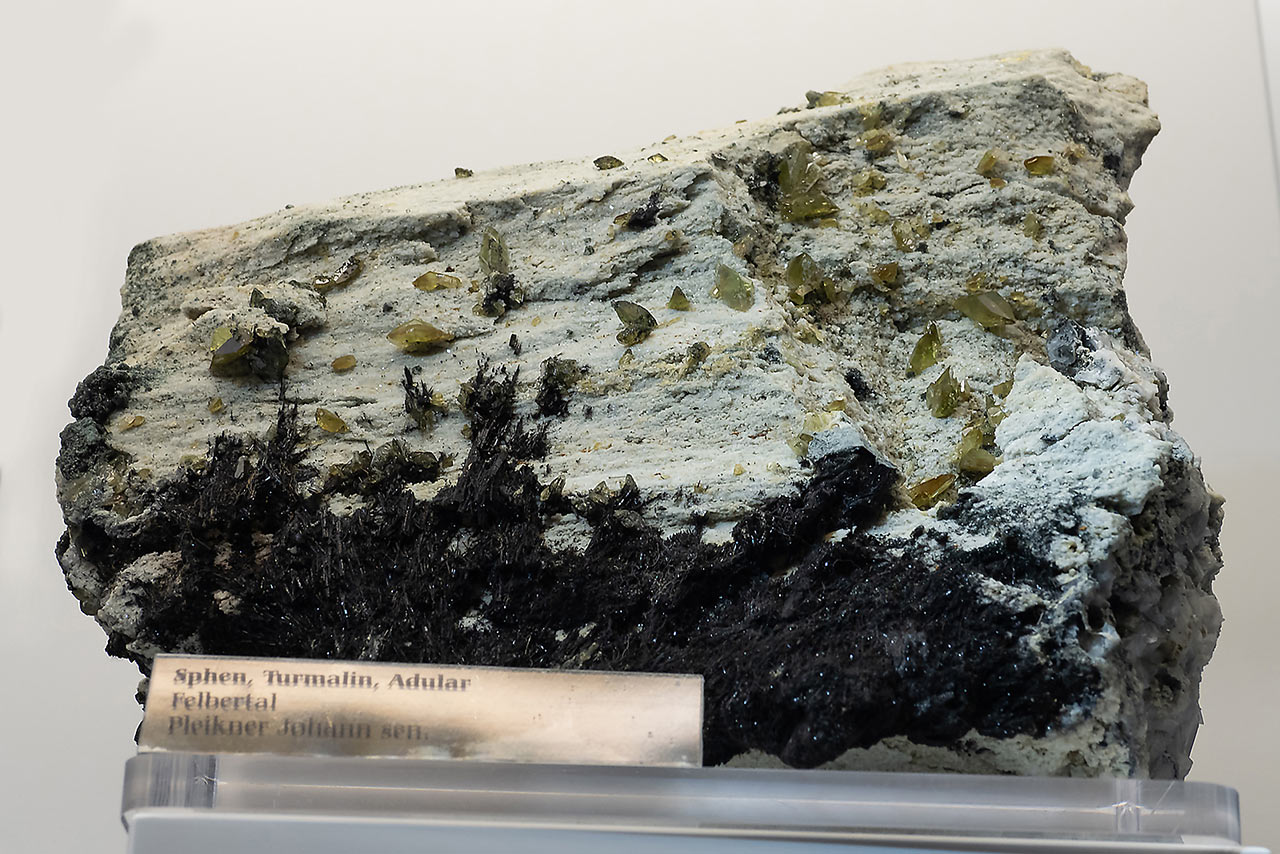 Of course, there is plenty of Alpine quartz in the Hohe Tauern Mts. too. Its generally bigger then in the Western Alps, but on the other hand usually pale colored and also gwindels (Alpine twisted crystal aggregates) are much more rare. But more complex rock formations often produce nice combinations of quartz with adularia, pericline, calcite and less often also with zeolites (stilbite, apophyllite). Nice bonus is the occurence of rare rutilated quartz or scepter amethyst specimens. 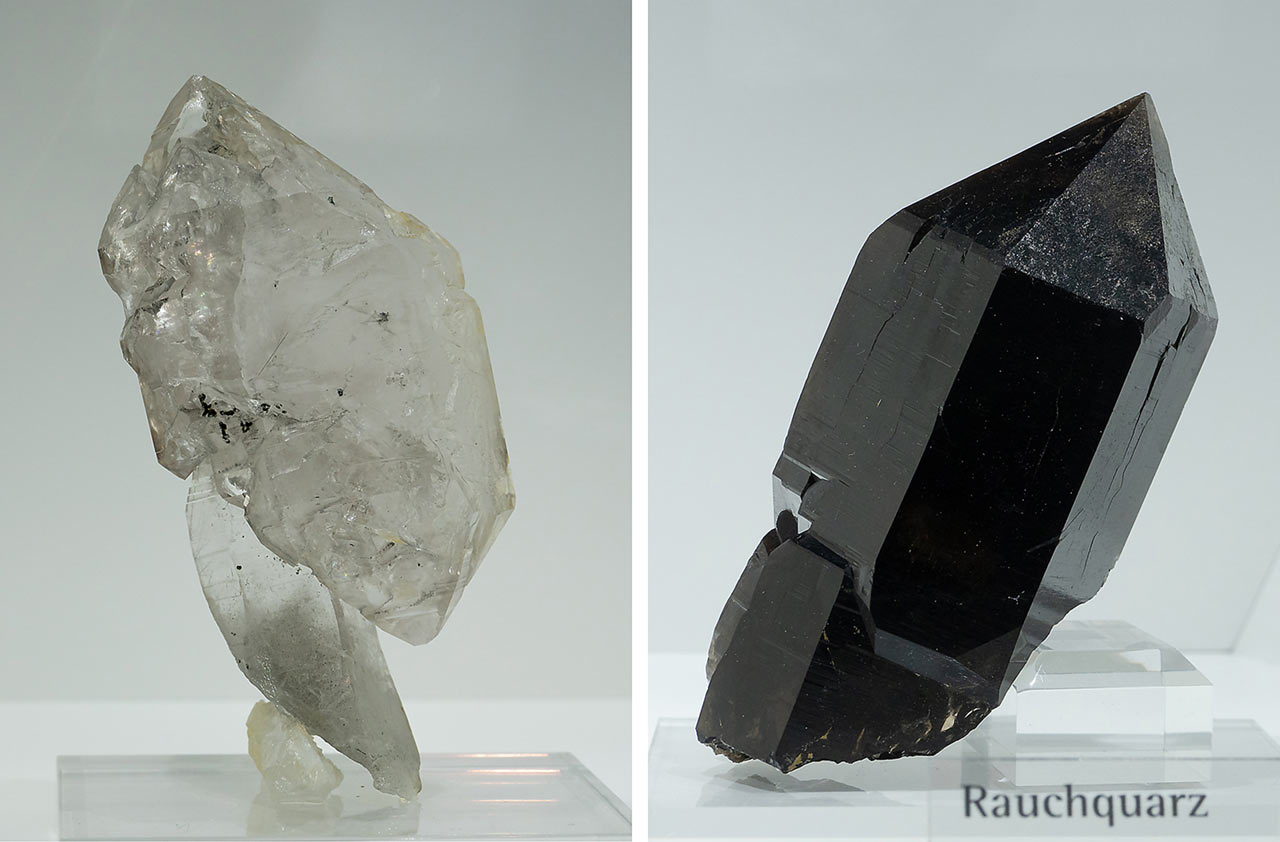 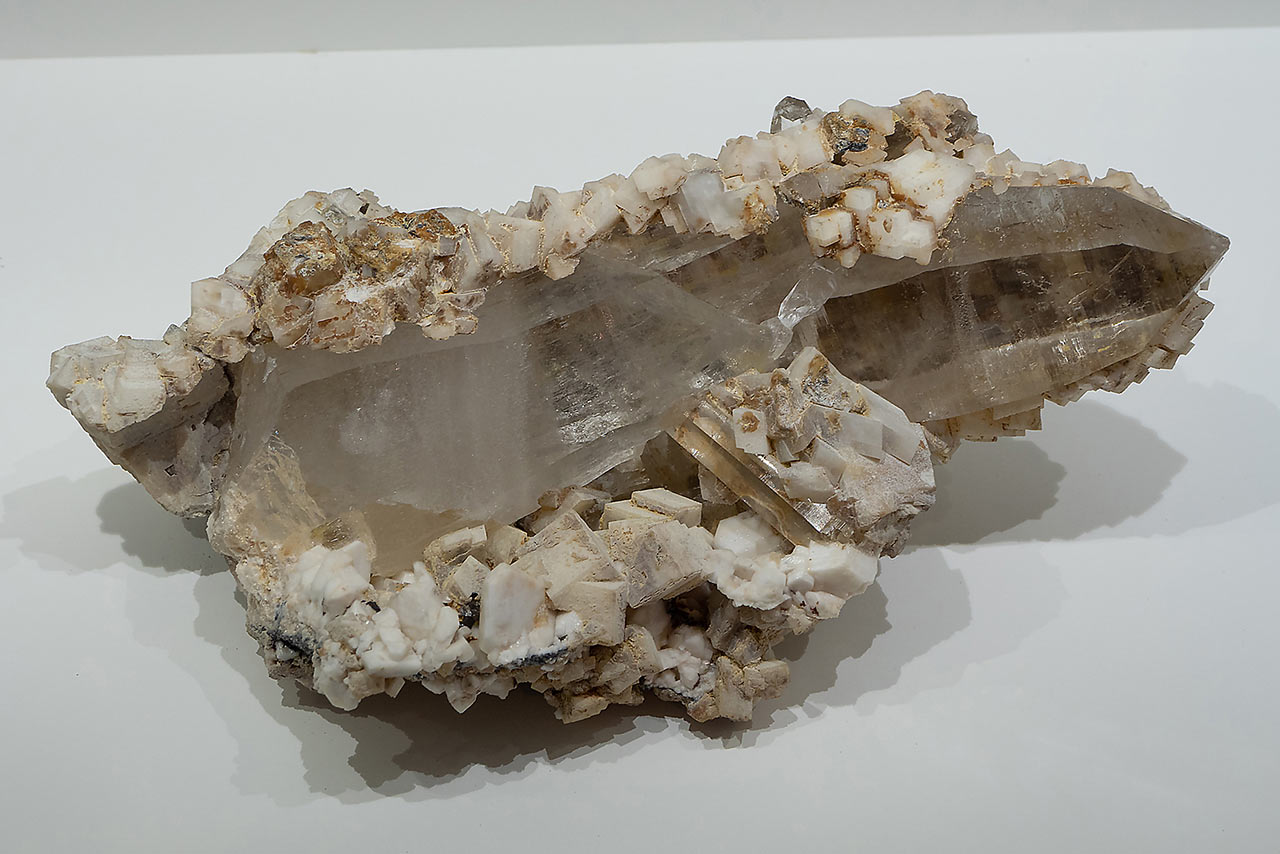 Smoky quartz with the calcite and pericline from the Rauriser Tal, Hohe Tauern, Austria. 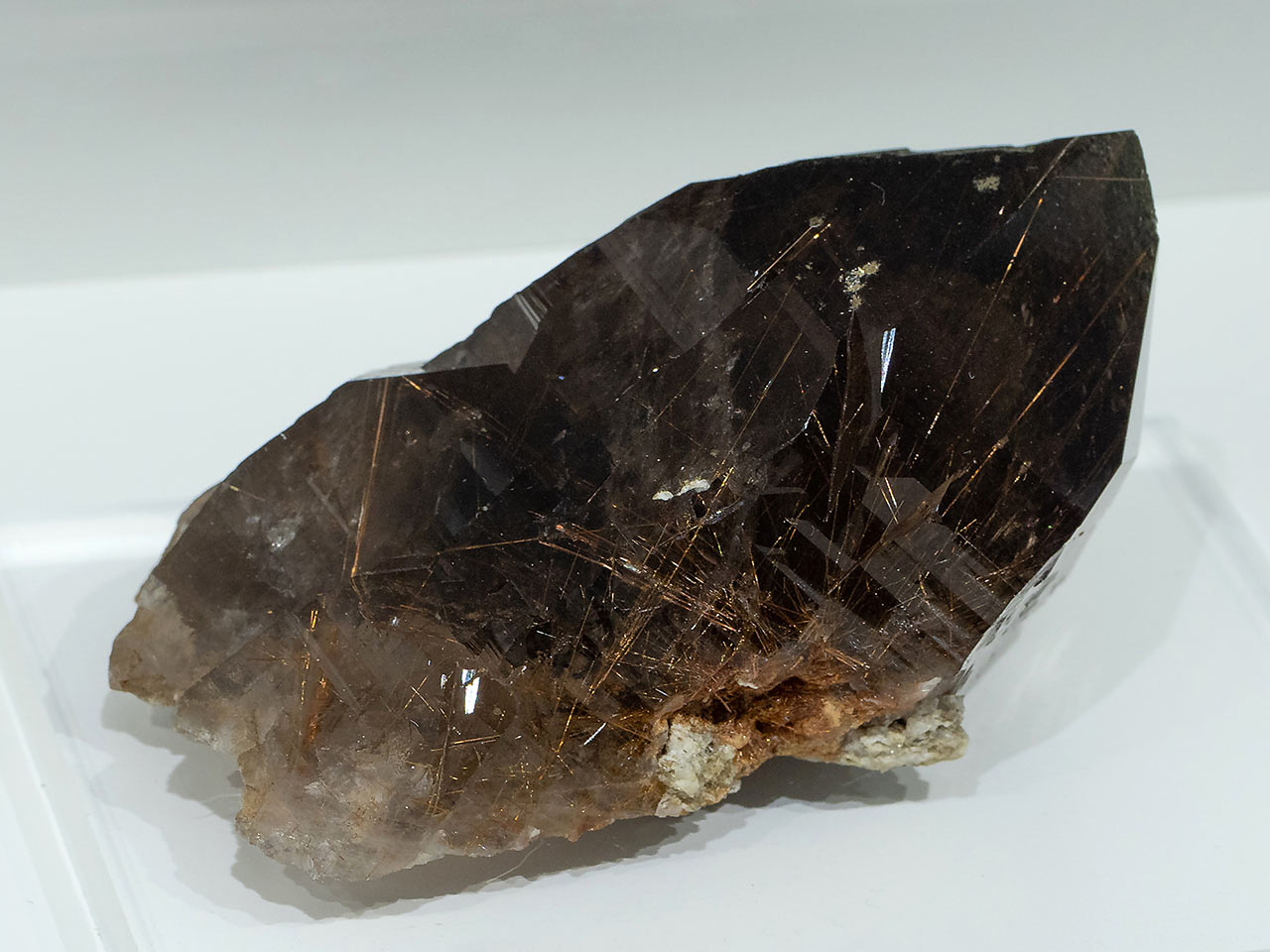 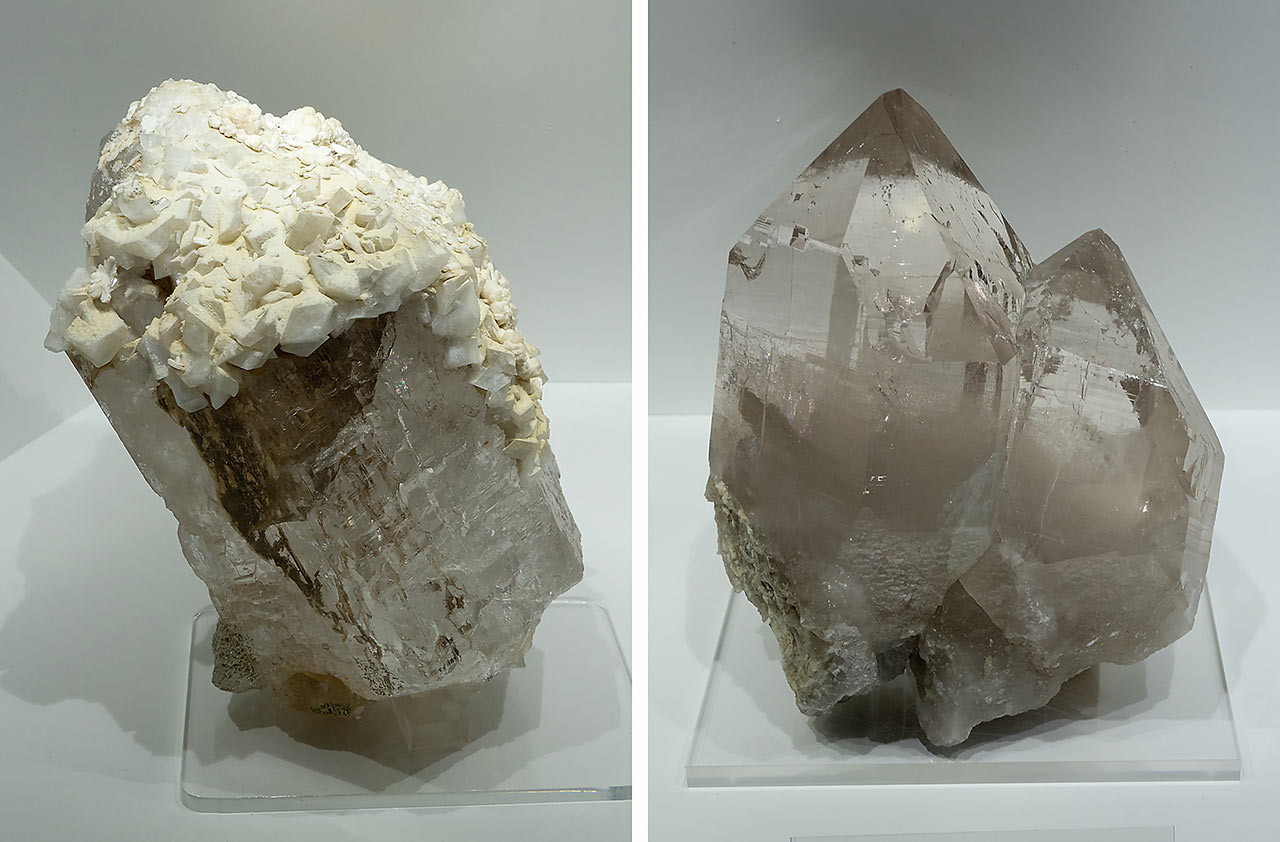 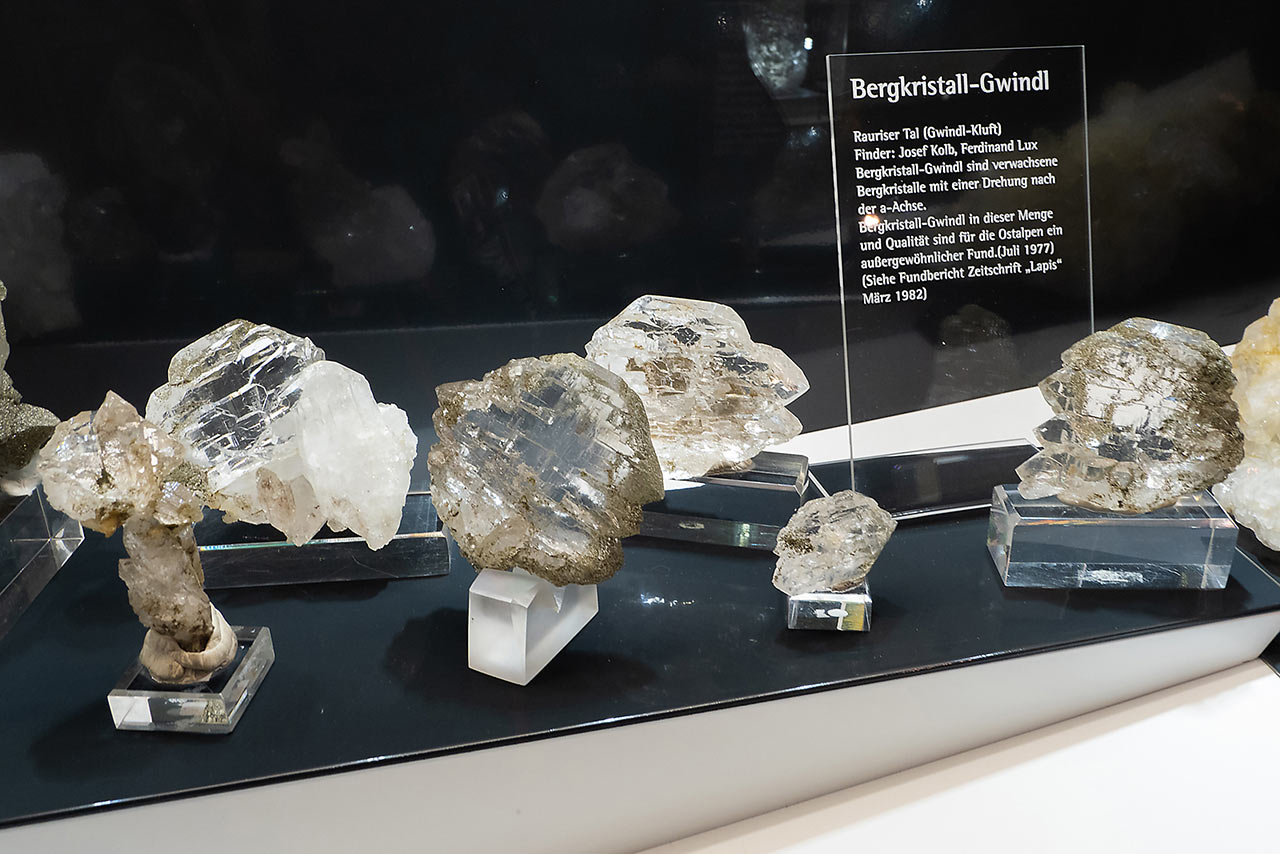 Selection of the gwindel quartz from the Rauriser Tal, Hohe Tauern, Austria. 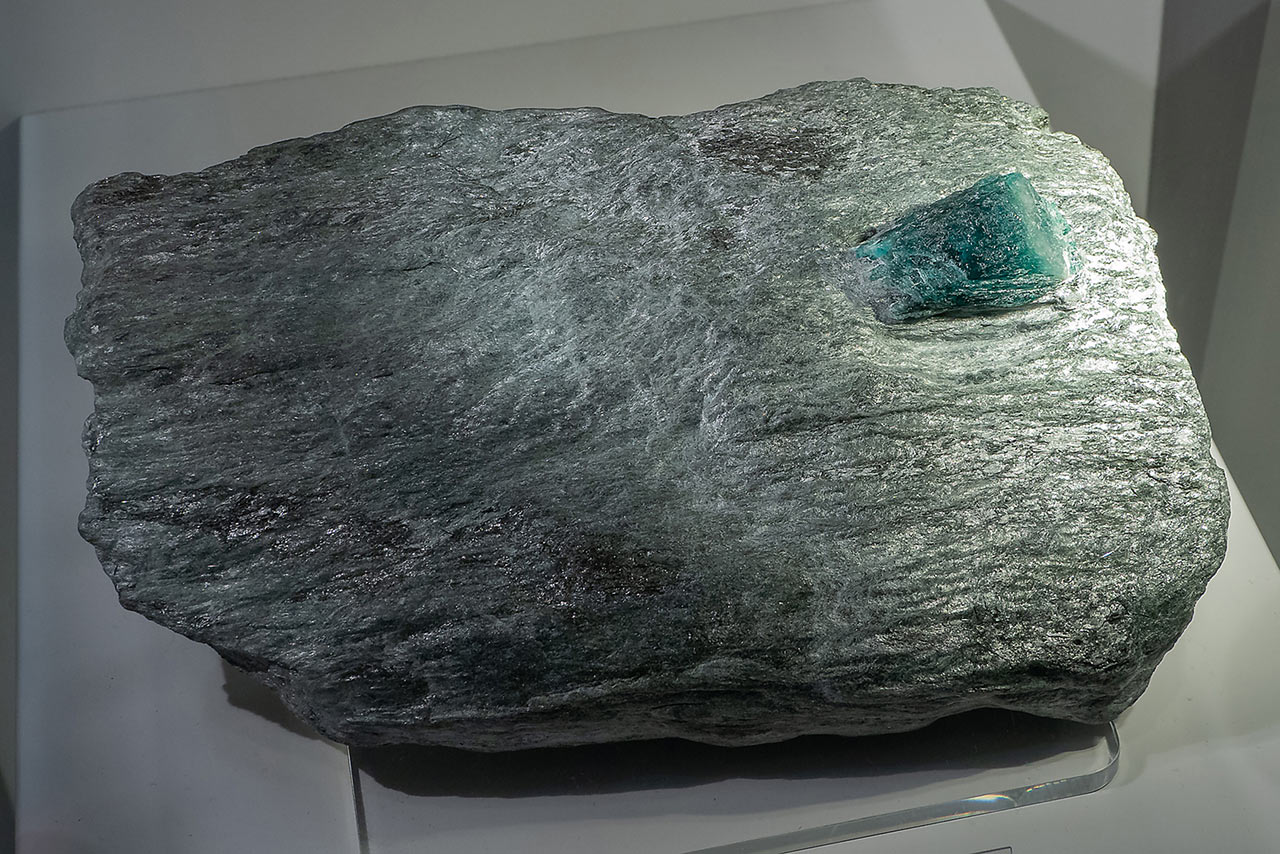 Huge emerald crystal in schist matrix from the Habachtal, Austria. 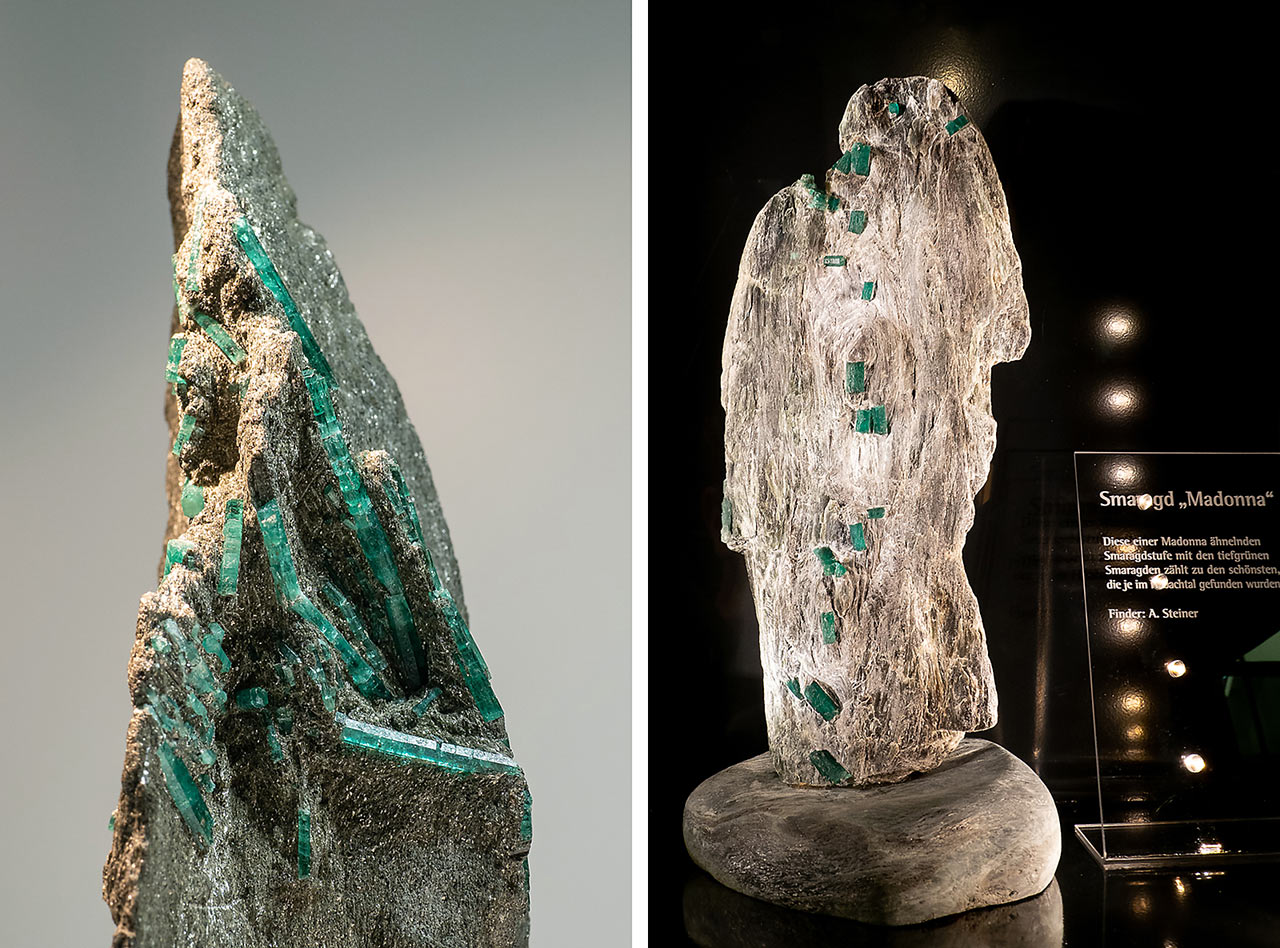 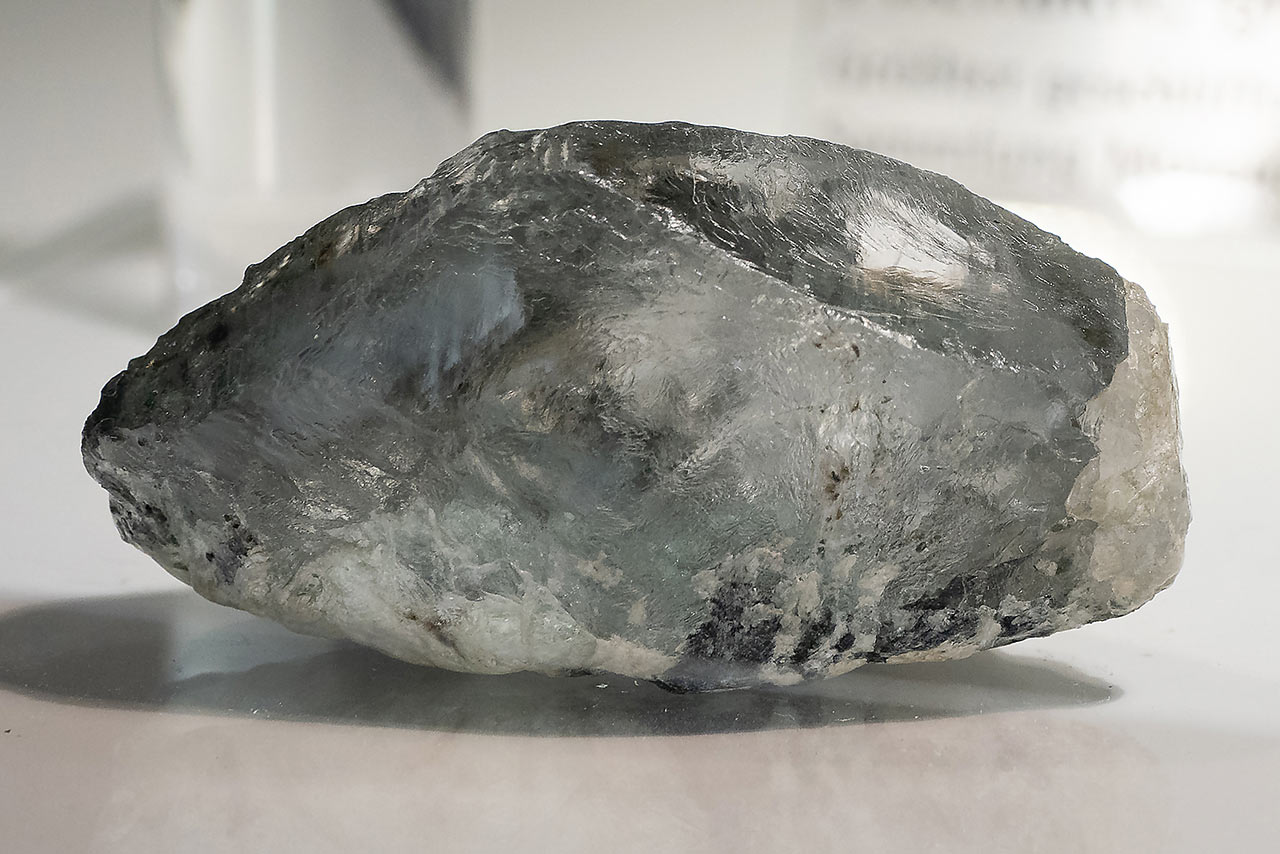 Big clear phenakite crystal from the Habachtal, Austria. These were found near the emerald mine. 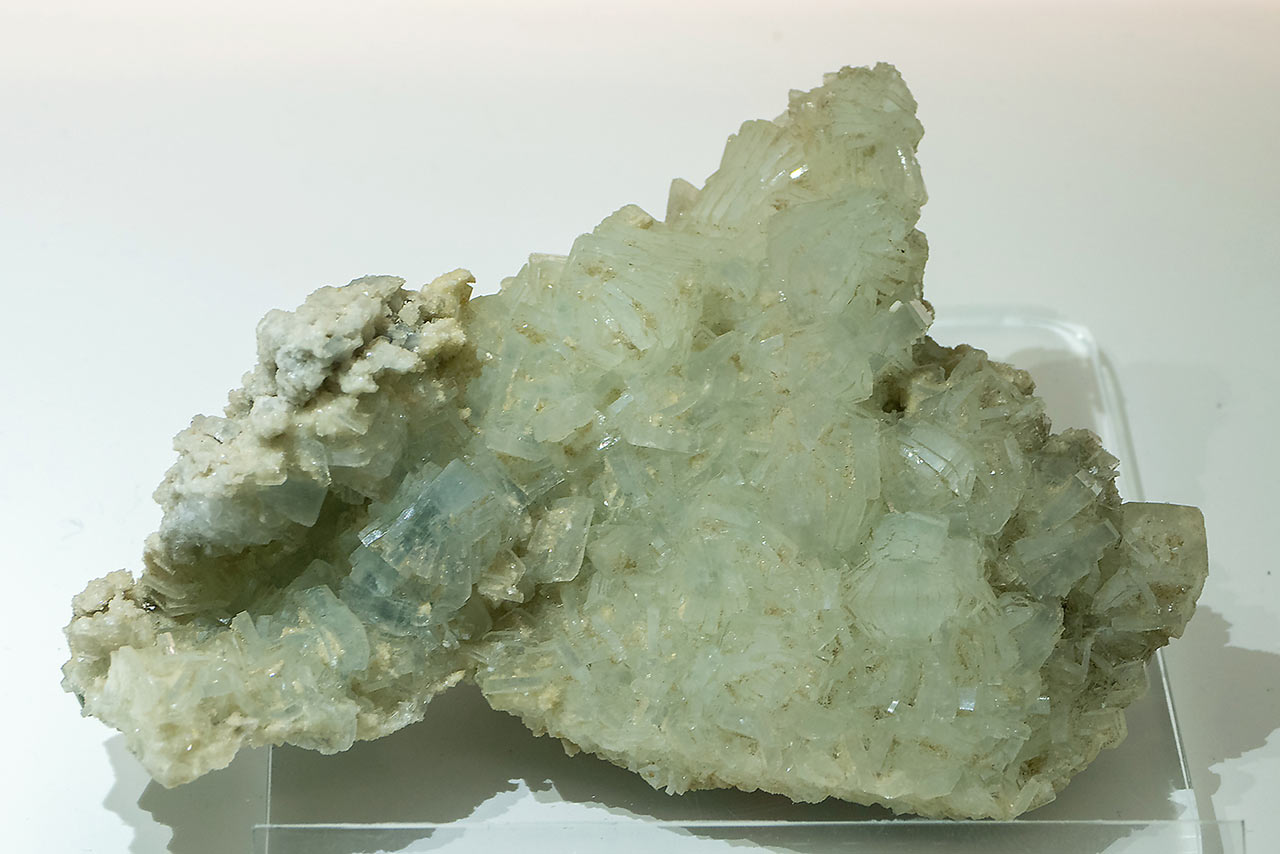 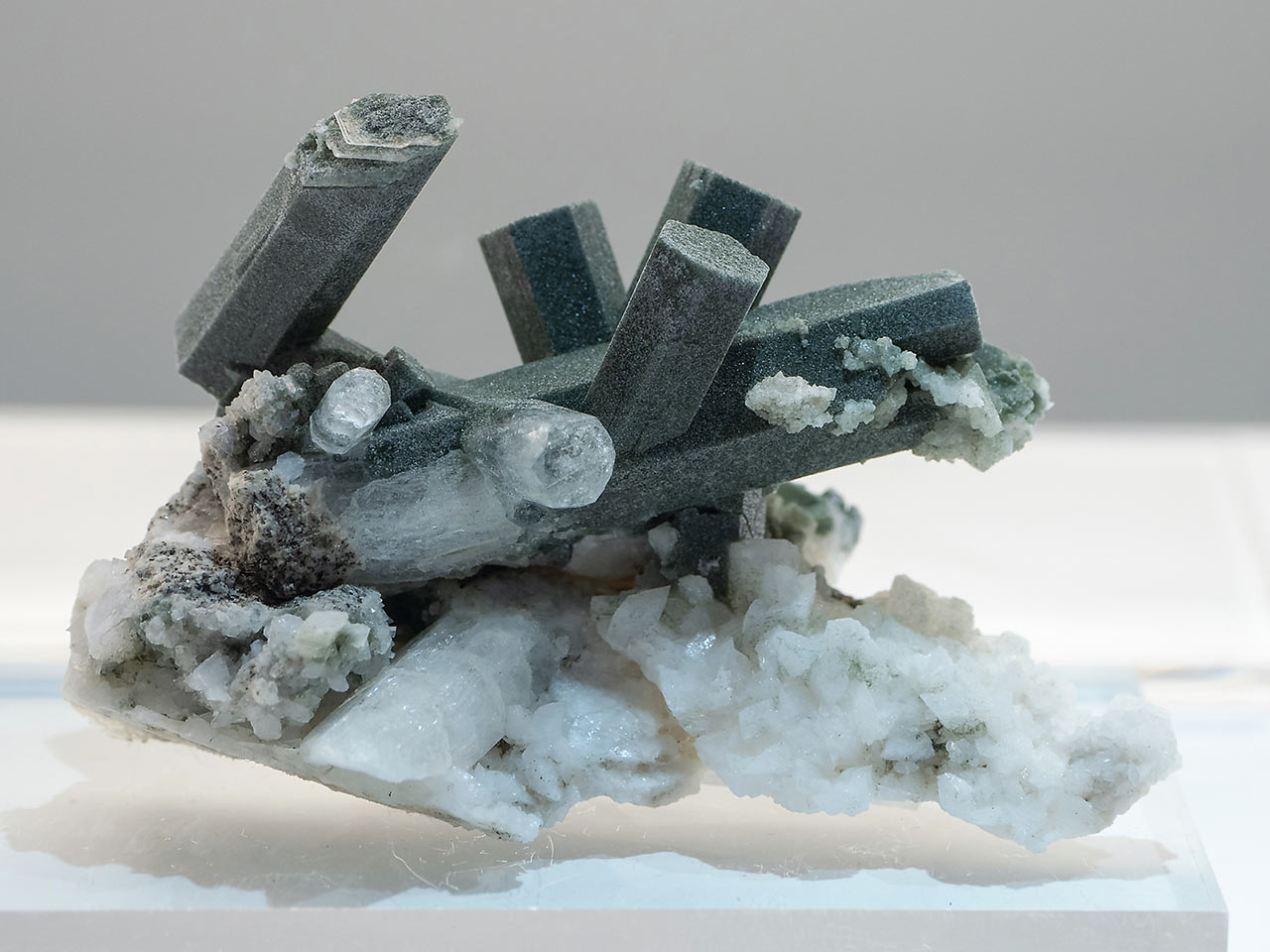 World class milarite coated by chlorite from the Habachtal, Austria. 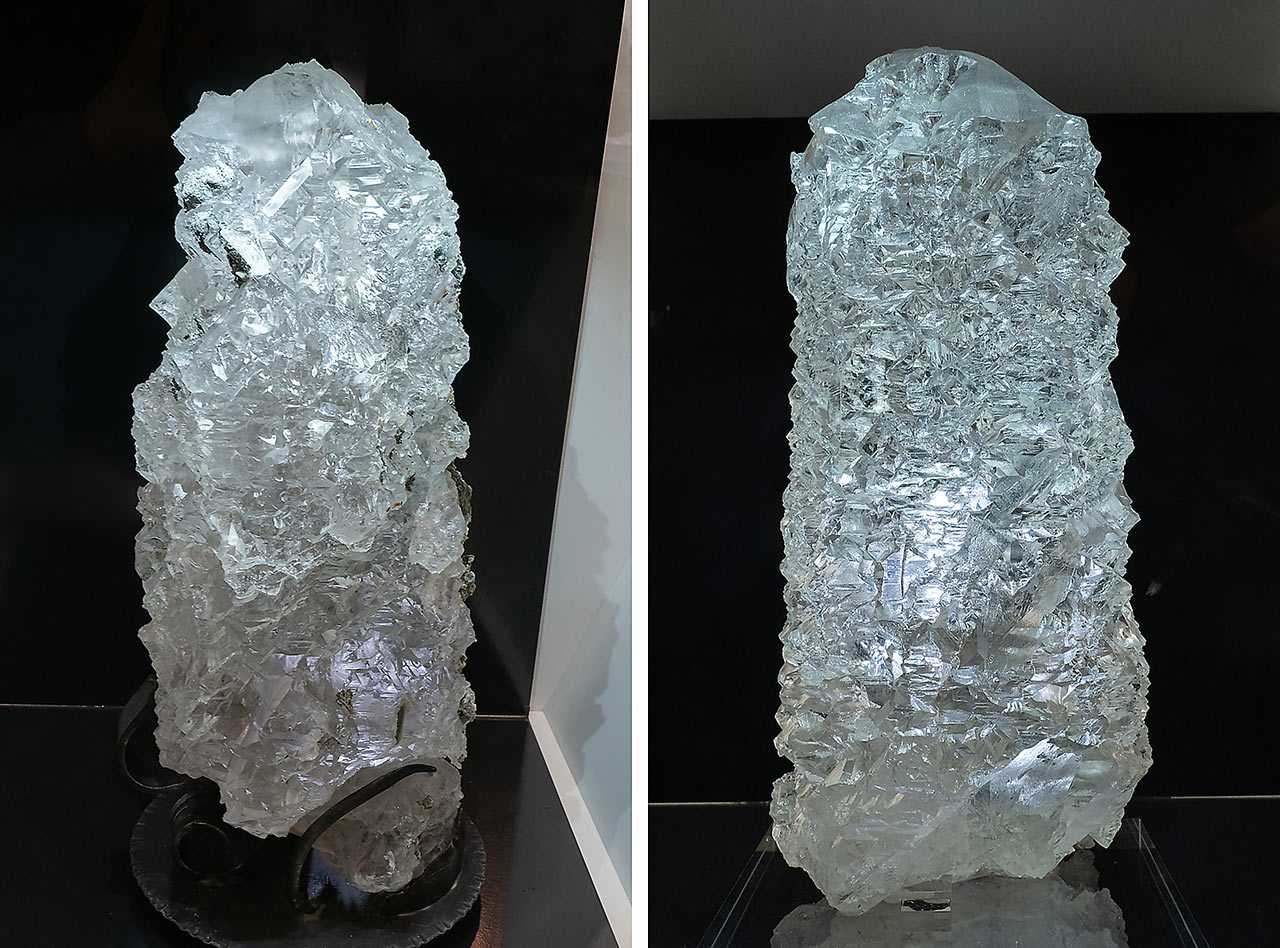 Huge etched (labeled as "skeletal" though) quartz crystals from the Habachtal, Austria.

The other worldwide famous area is the Knappenwand in the Untersulzbachtal Valley. This classic locality produced world class epidote with actinolite asbest (byssolite), also apatite, titanite and calcite. 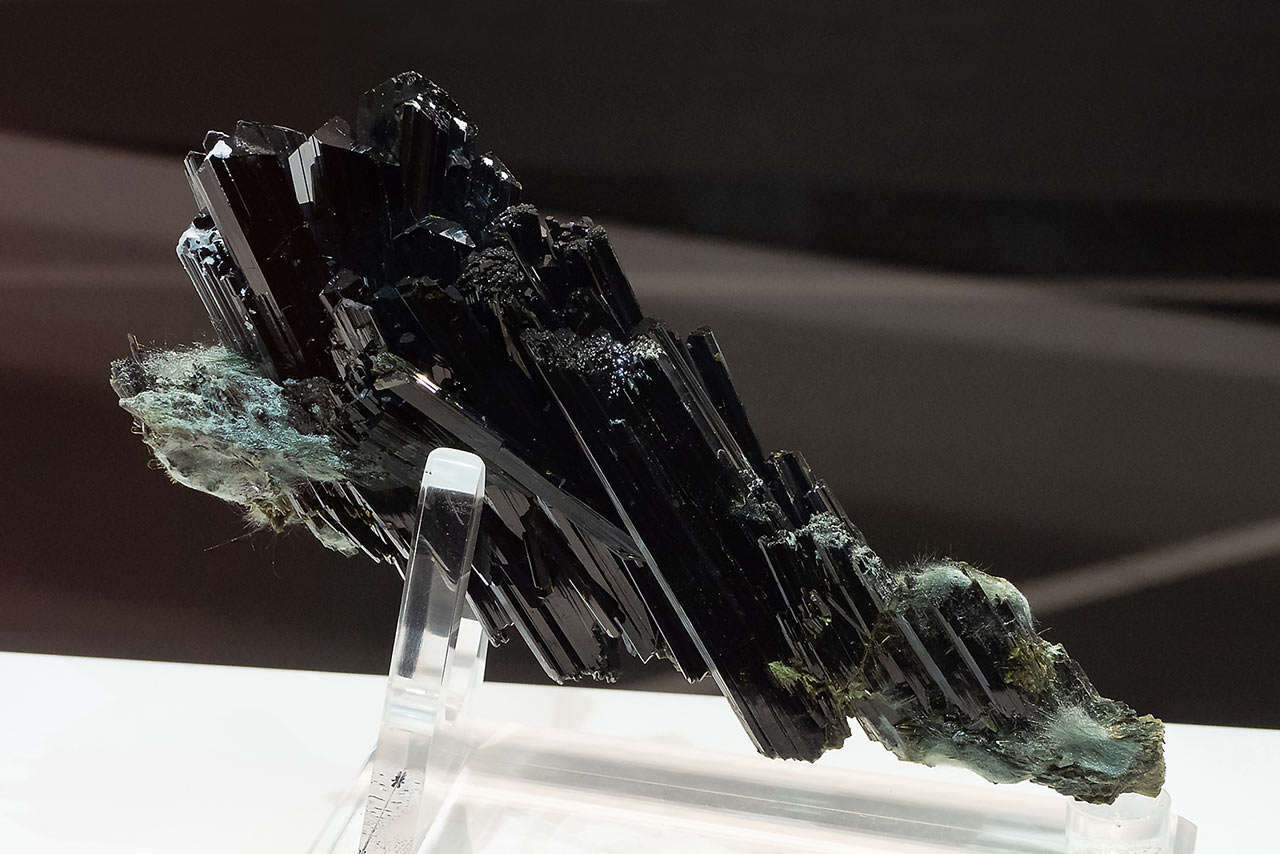 Classic specimen of the dark epidote crystals from the Knappenwand, Austria 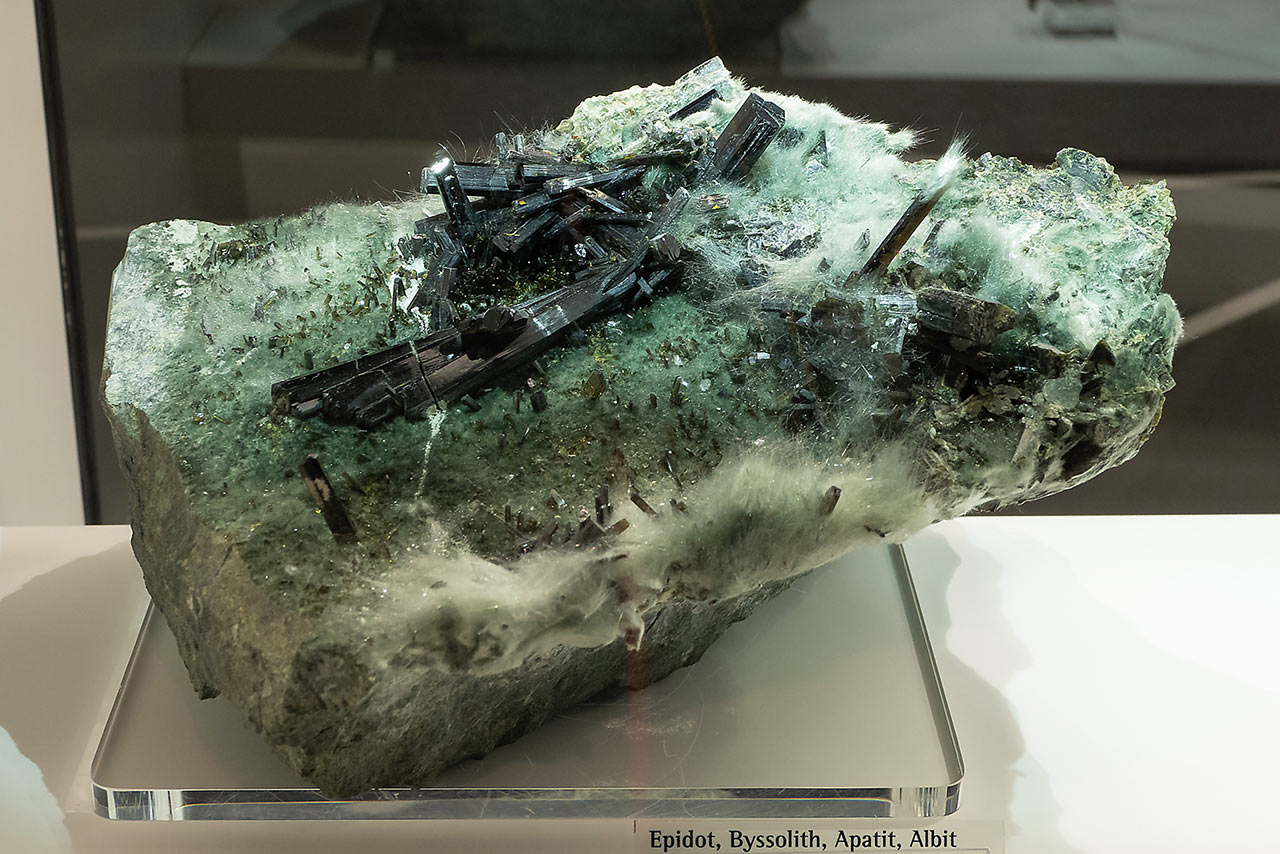 Huge specimen with the actinolite asbest (byssolite), epidote and minor apatite and albite from the Knapennwand, Austria.

Collecting in the Hohe Tauern Mts. is prohibited, except the part of the Habachtal area, which is outside the national park.

Minerals of the Zillertal Alps

The western part of the Tauern window structure of metamorphic rocks geographically belongs to the Zillertal Mountains. These are quite similar to the classic sites in the Hohe Tauern Mts., with famous finds of iron rose hematite (in German Eisenrose), huge Alpine amethyst, apatite and rutile. 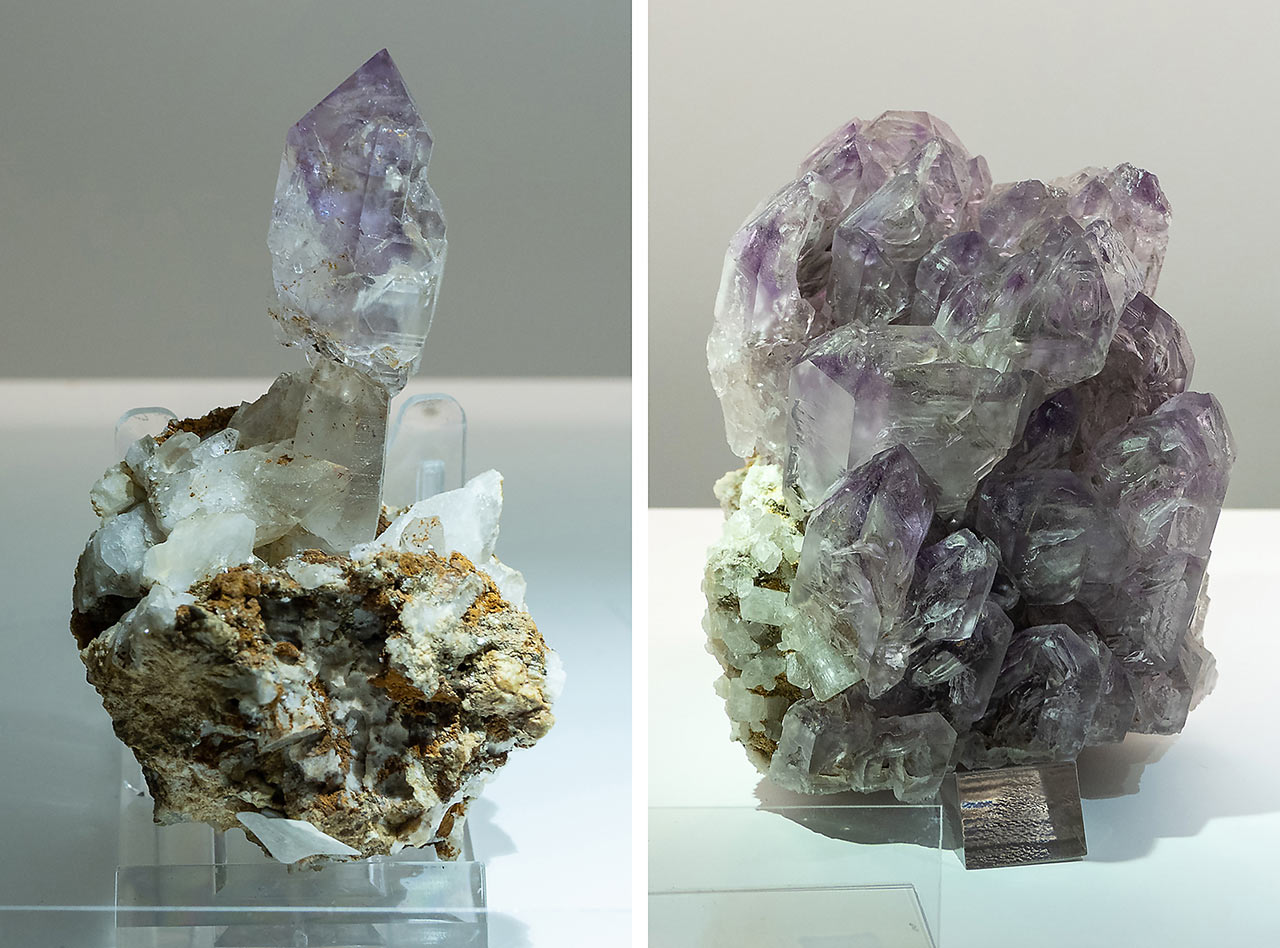 The Bramberg museum displays the hematite which is labeled as the biggest iron rose in the Alps. The focus of the Bramberg display is definitely Hohe Tauern Mts. but also Zillertal is very well presented with world class specimens. Collecting in Zillertal was not banned until recently, when collecting above the tree level was generally allowed. Currently, the collectig in high altitudes is allowed only with proper permit (see Lapis 7-8/2018). 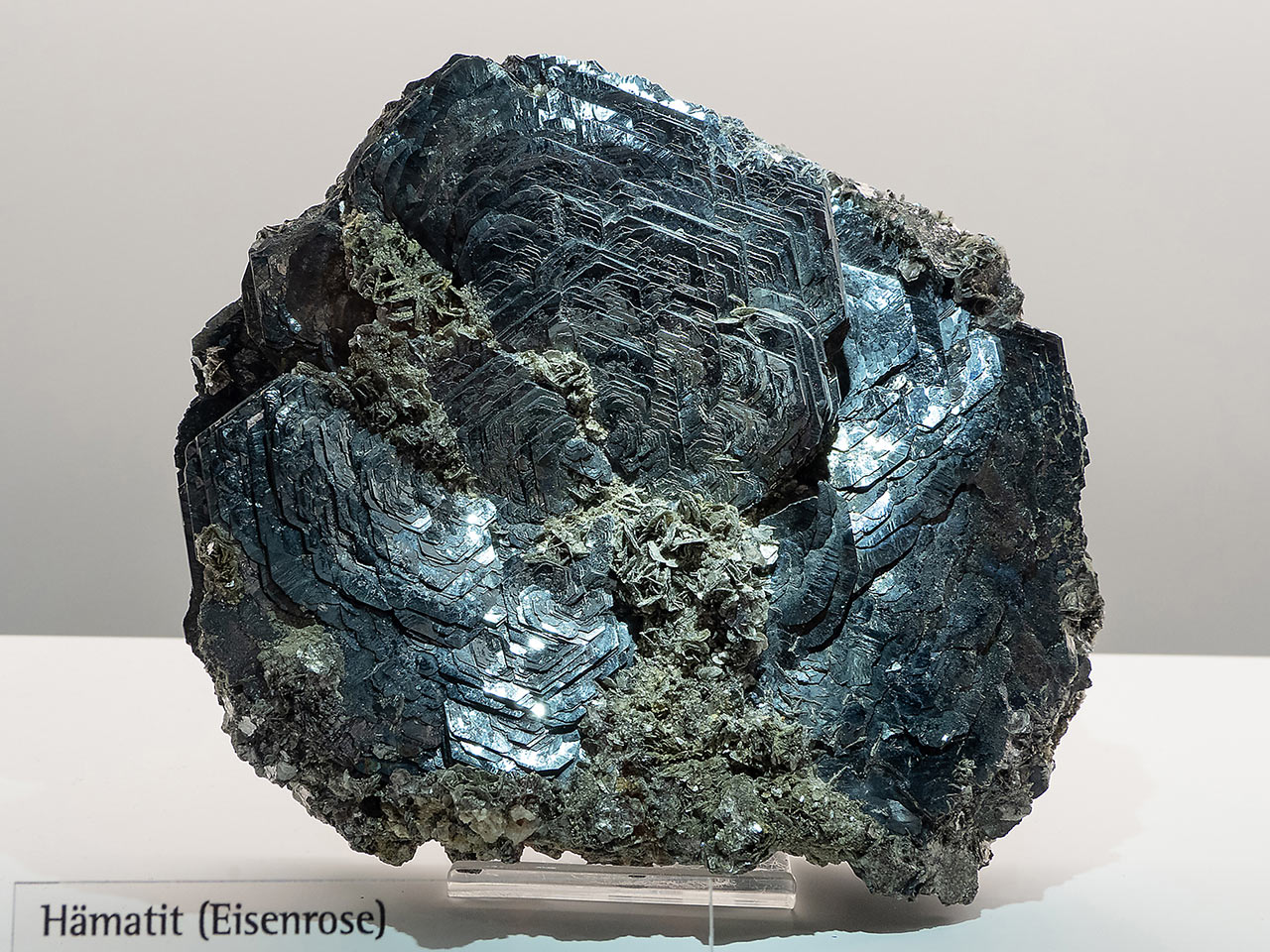 Monster size hematite (Eisenrose) labelled as "the biggest from the Alps" from the Mörchnerkar, Zillertal Alps, Austria. 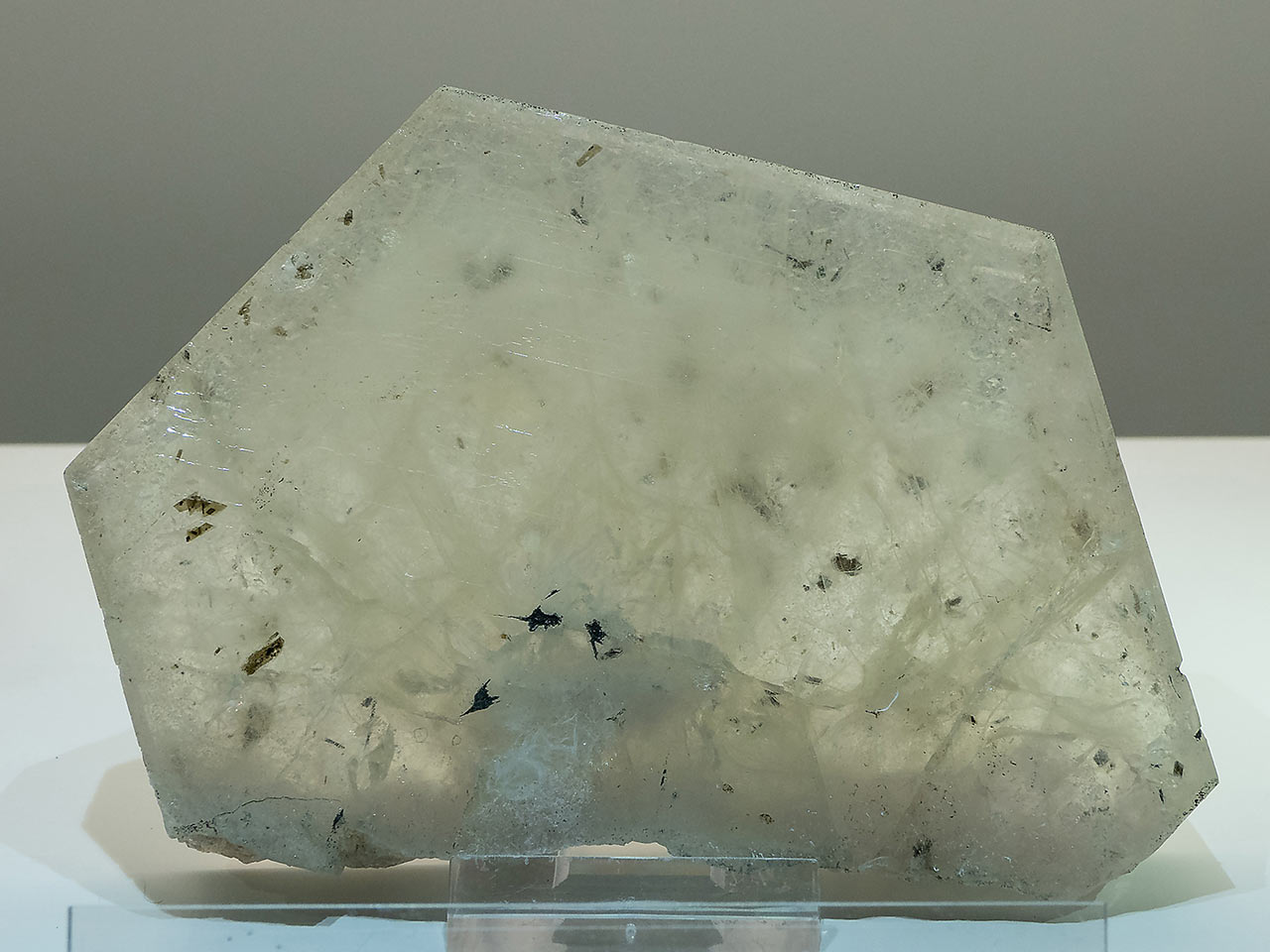